Unlike Salt and Sanctuary, Salt and Sacrifice has plenty of multiplayer functions to play around with. These range from cooperative PvE to antagonistic PvP to a chaotic blend of both. Frustratingly, unlocking the various cooperation and invasion options will require you to explore the game's regions quite thoroughly, as many of the NPCs required are hidden deep within dungeons.

Once unlocked, however, multiplayer sessions can be highly rewarding. Not only are they fun to play, but you can also earn special tokens that allow you to purchase unique items, weapons, and armor.

How To Play Co-Op 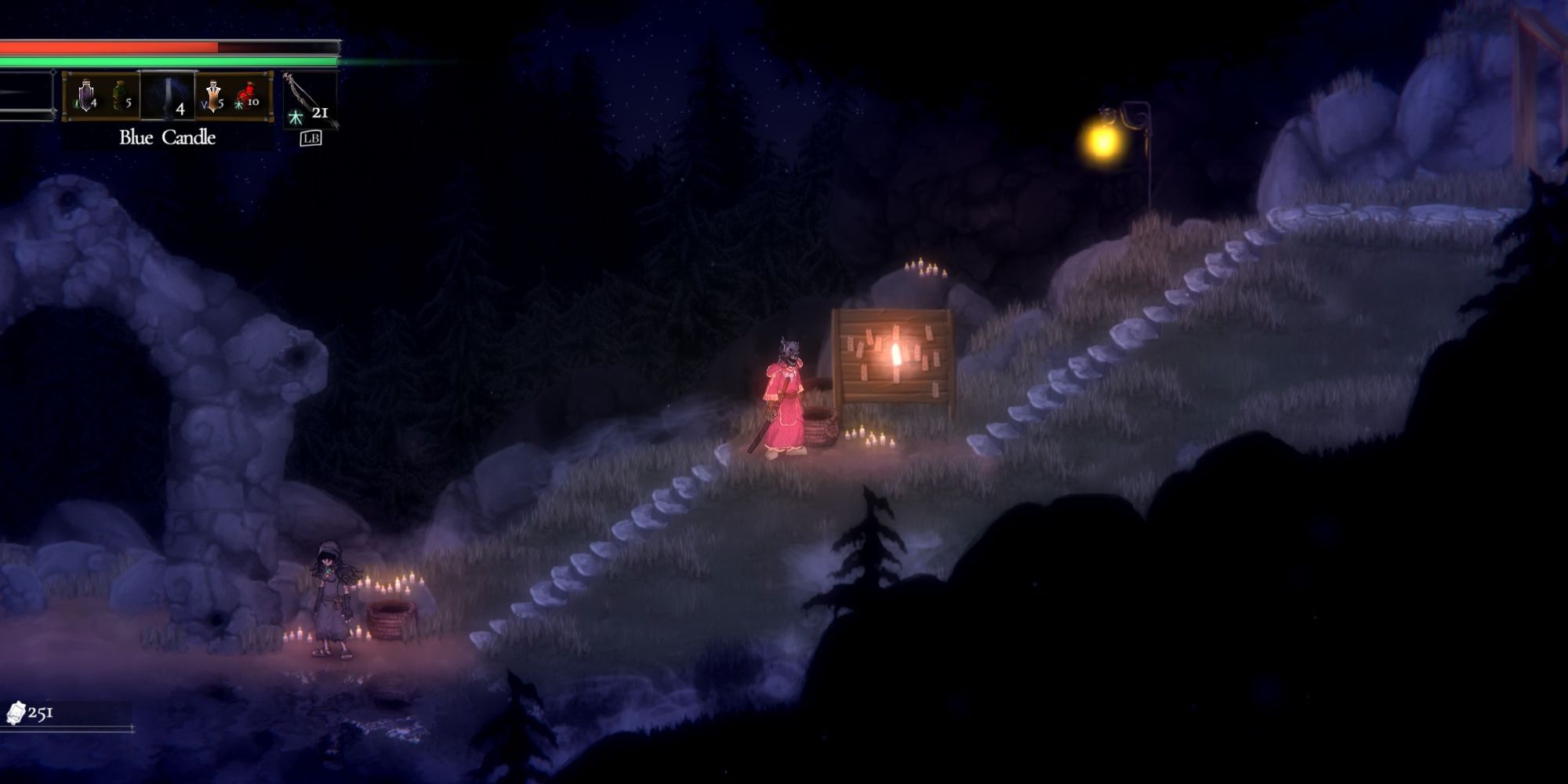 To initiate co-op, you simply head to the east of the portal in Pardoner's Vale and interact with the Cooperation Board there.

Here, you can either Host a co-op session or join one using a passkey. Not all of the rune slots must be used, but the passkey must match for both players. 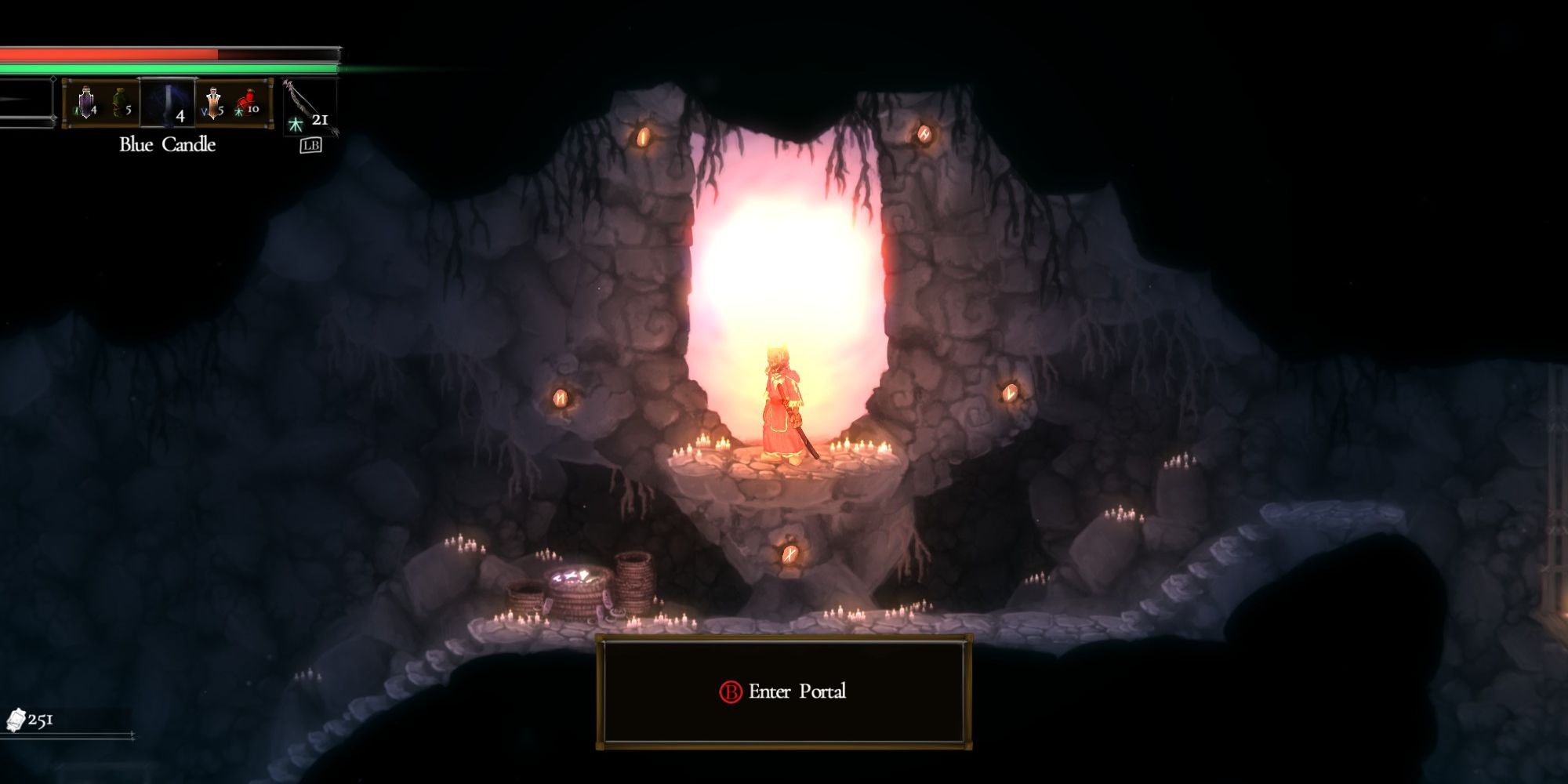 For the other varieties of multiplayer gameplay, certain items must be acquired, and certain factions must be unlocked. These will allow you to match up with other players randomly, either for PvE or PvP gameplay. If you want to avoid invaders, you can set a password in the Settings menu.

There are six factions available to unlock. Successfully completing a multiplayer session while working under one of these factions will reward you with a token, which can be used to purchase special equipment from that faction's representative, who will be recruited to Pardoner's Vale.

The table below details the six factions you can play for, as well as where you'll encounter them in the world. Once you've talked to them, they'll move to Pardoner's Vale where you can talk to them further and buy things from them. In addition, the table details the types of weapons and class of armor they sell. 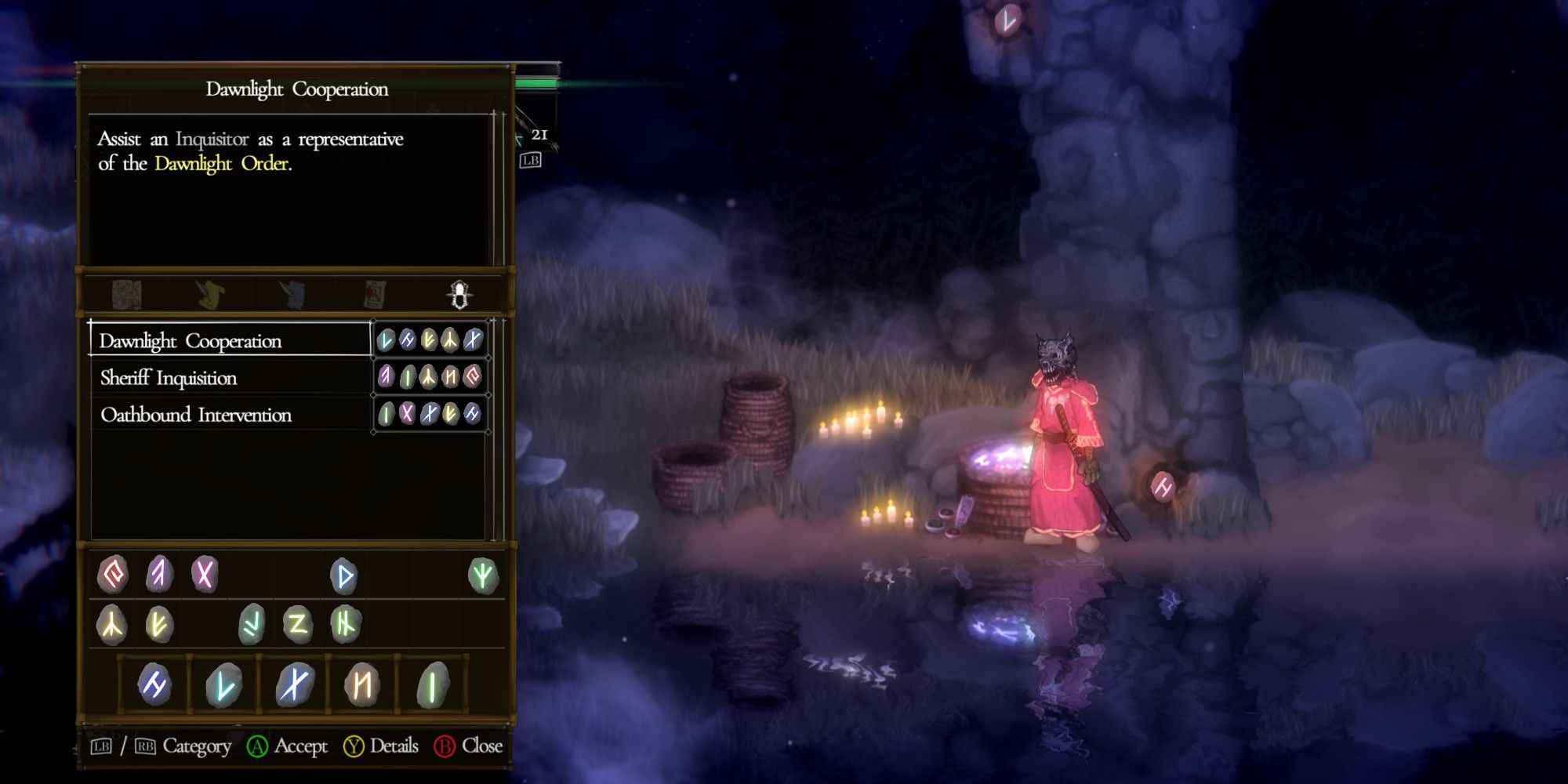 These three factions are focused around helping others, though two of them do so by putting you up against other players in order to protect the host. 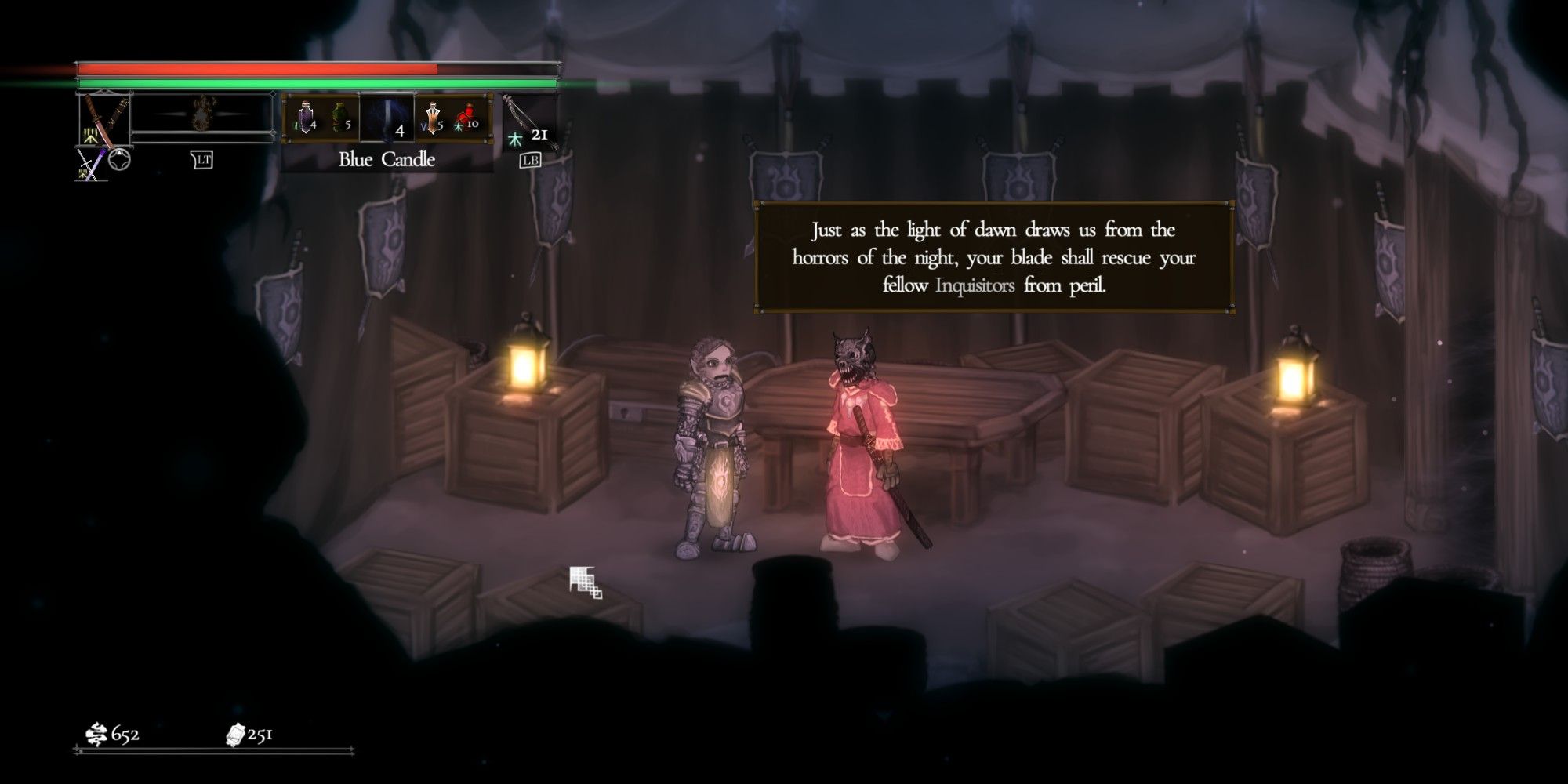 To host a Dawnlight Cooperator, you need only two things:

If you want to join a player as a Cooperator, you'll first need to recruit the Dawnlight's NPC representative to Pardoner's Vale. You'll find her if you head beneath the gatehouse in Ashbourne Village and then take the lower, western exit. Talk to her in Pardoner's Vale, and you'll be able to match up with other players through the use of a Pale Candle or the Mirrorgate in Pardoner's Vale.

Players who are using Dawnlight Cooperation to play together are susceptible to invasions from players from the Shroud Alliance, Blueheart Runners, or the Chaos Hunger factions.

To join a player, you'll need to have access to the same worlds and the same Inquisitors' Tools as them. 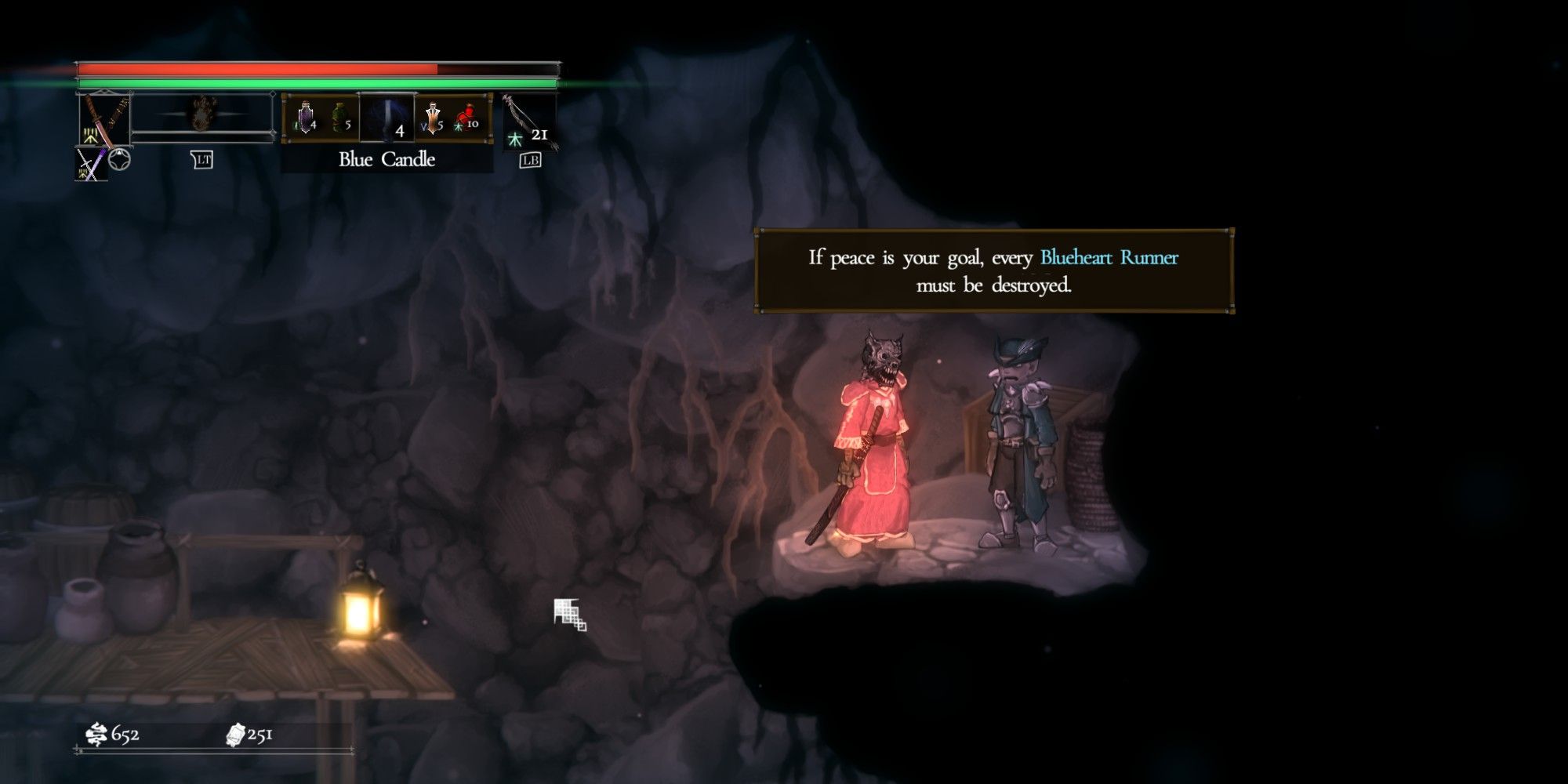 To join the Sheriff Inquisition, you'll need to recruit the faction's NPC. He's located in the Unclean Oasis, an area that can be accessed from the east side of Bol Gerahn Temple. You'll have to fall onto his platform from the fragile platforms above.

Once you've talked to him, you'll get the Tealfeather Amulet. If you wear this (or if you use the portal), you will be drawn into worlds currently being invaded by Blueheart Runner invaders. Your aim here will be to kill the Blueheart Runner. 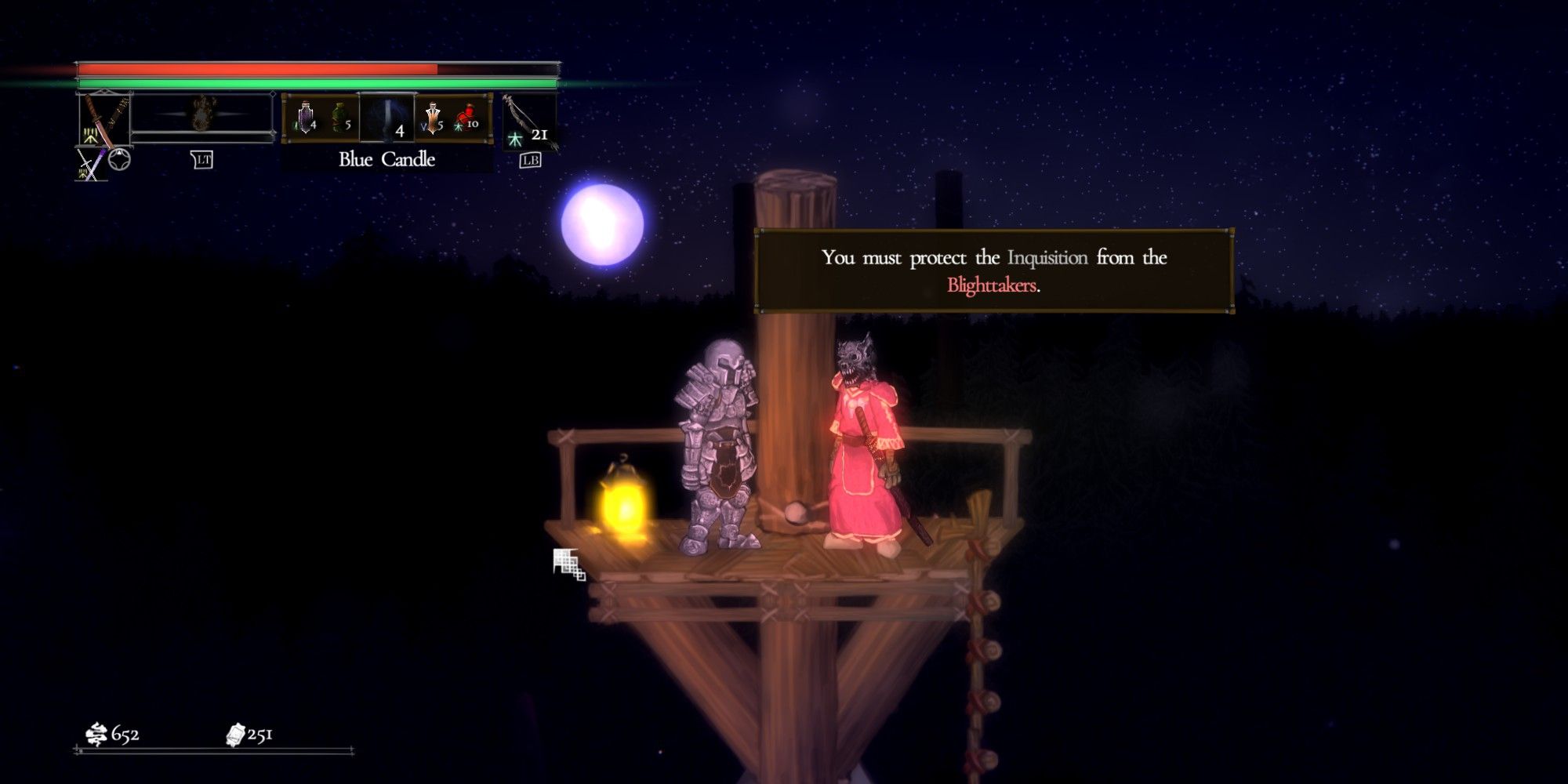 The Oathbound Watchers are very similar to the Sheriff Inquisition. Once you have found the NPC, who is located in Corvius' Mire near the entrance to The Great Tree, you'll receive the Oathwritten Amulet.

When wearing this Amulet, you may be drawn into the world of a player being invaded by a Chaos Hunger or Shroud Alliance player. 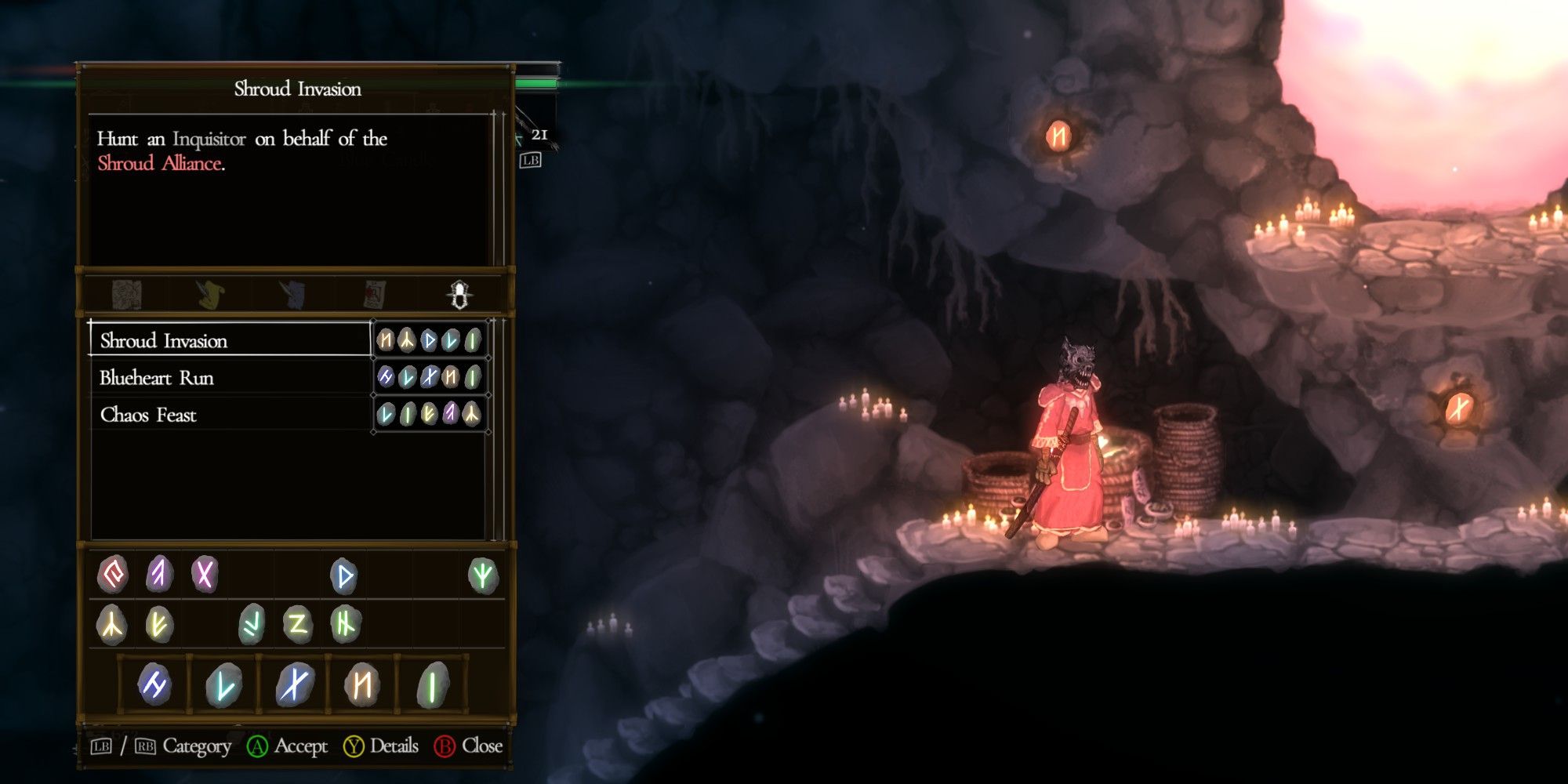 If you want to invade another player, you'll have to do so under one of these factions. They all differ in their playstyle, and their NPCs are all located in the Treachers' Grotto beneath Pardoner's Vale once recruited.

You may only invade a player if they are cooperating under the Dawnlight faction, unless you are invading under the Chaos Hunger faction, in which case you can invade any world with more than one player in it.

To invade, you'll either have to use a quickplay item from one of the factions below while in the field (i.e. not in Pardoner's Vale), or you must use the portal located in Treachers' Grotto.

The use of the Crimson Candle item will allow a player to be invaded without having a co-op partner first, but you must not be Spellmarked for this to work.

There is a 15-minute cooldown after being invaded unless you use the Full Moon Incense to remove it. 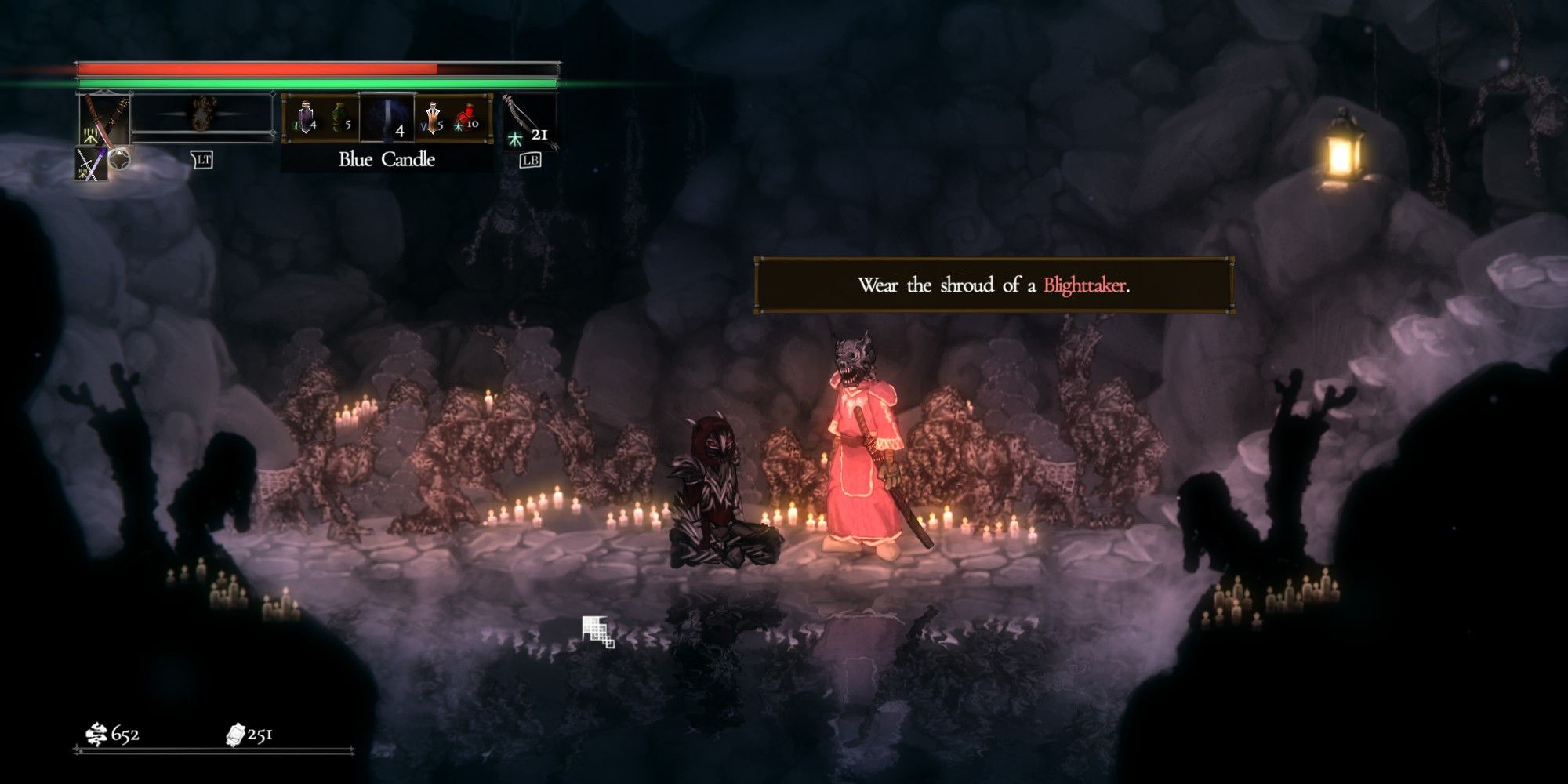 This faction is your basic "invade player's world, kill the player to win" group.

To gain access to this faction, you'll need to talk to the NPC located at the very top of Bol Gerahn Temple. Once at Pardoner's Vale, you can purchase Pages of Curses from him that you can use to invade while out in the field. 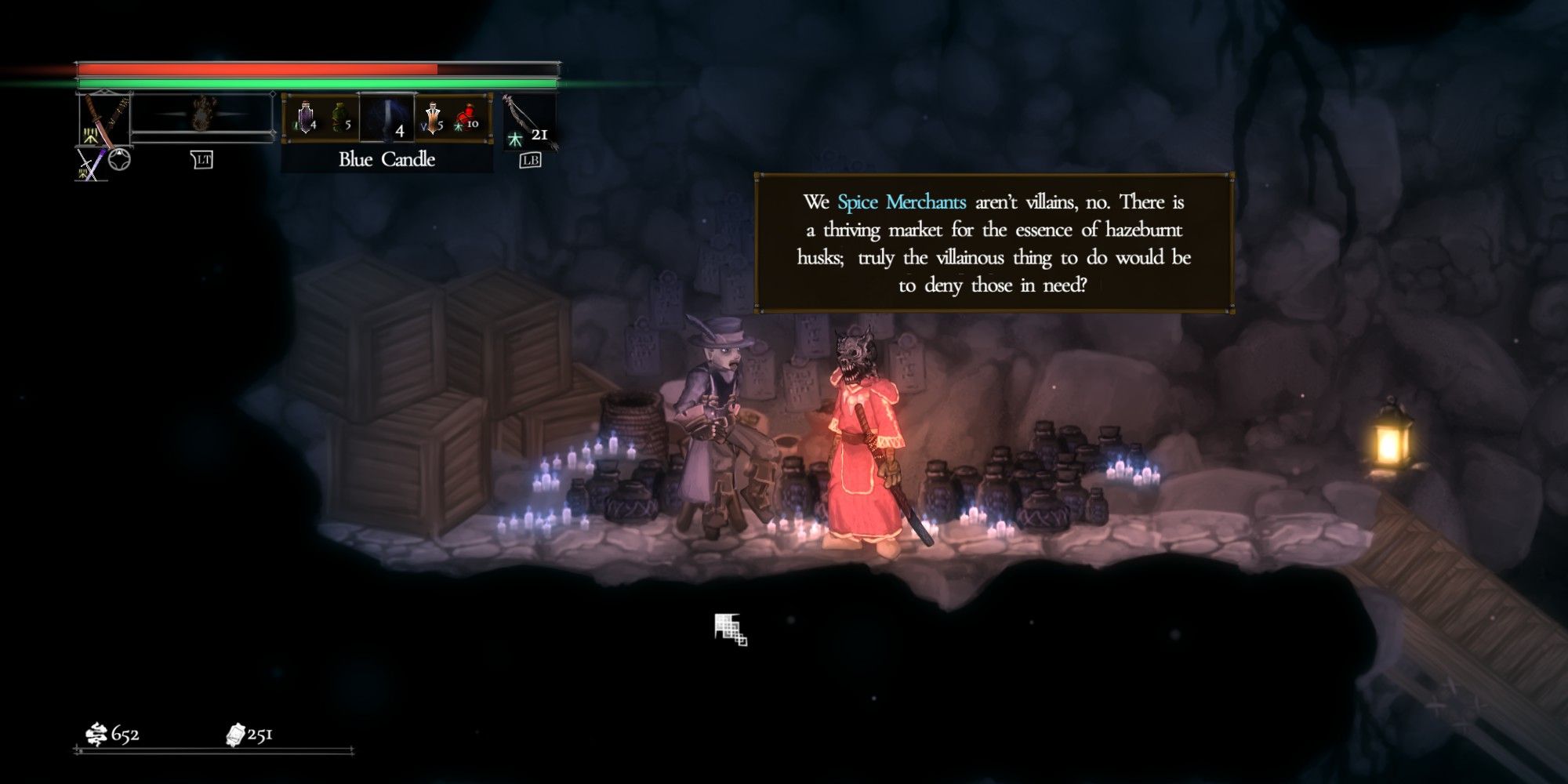 In Blueheart Runner invasions, your goal is to destroy Hazeburnt Husks in order to collect their Haze. Collecting Haze will weaken the host, making them easier to eventually kill.

The NPC that lets you join this faction is located behind a locked door in Stonehall Dungeon, which is inside Craterstone Mine. To open the door that blocks your way, you'll need to get the two keys from the upper half of the Archridge District. The first key is found just above the Hydromancer Hunt location, and the second is at the very top of the area, found after jumping across the roofs.

You can buy Blue Candles from this NPC with which you can start invasions or simply use the nearby portal. You may also buy Illusionist's Drafts from the NPC that allow you to assume the appearance of some nearby scenery. Use this to fool your opponents. 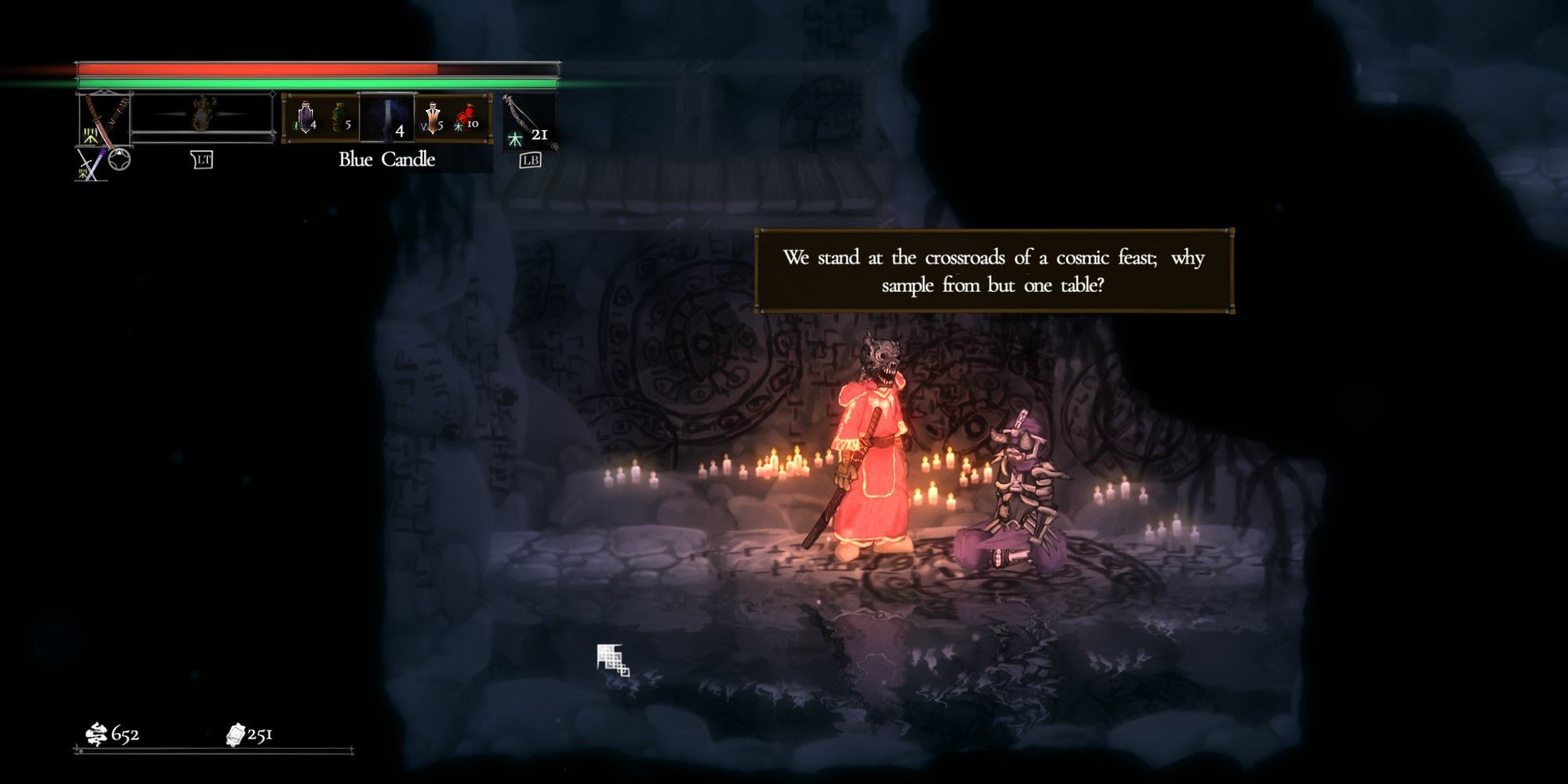 You can find the NPC for the Chaos Hunger faction inside the Old Annex, which is underneath the Temple of Eleven. This is located in the Dreadstone Peak region. You'll need to beat a Named Mage to access this area.

Once you have the NPC recruited, you can buy Unspeakable Flesh from them to start invasions, as well as Bone Boxes that you can gift to those you invade. You can also invade from the inverted Mirrorgate in Treachers' Grotto.