Rollerdrome starts the player off in the paired-down Matterhorn Arena. For all intents and purposes, completing the challenges acts as the game’s tutorial. And while the majority of these challenges are no-big-deal, they do still require that you have an understanding of the game that you, being a beginner, may not quite have a grasp on.

Similarly, the five combo tokens hidden around the arena, and the challenge to beat Morgan Fray’s time, may be an obstacle for those new to the game. Thankfully, we are here to walk you through all of these challenges. By the time you leave the Matterhorn Arena we promise that you will have a solid understanding of all the core mechanics. 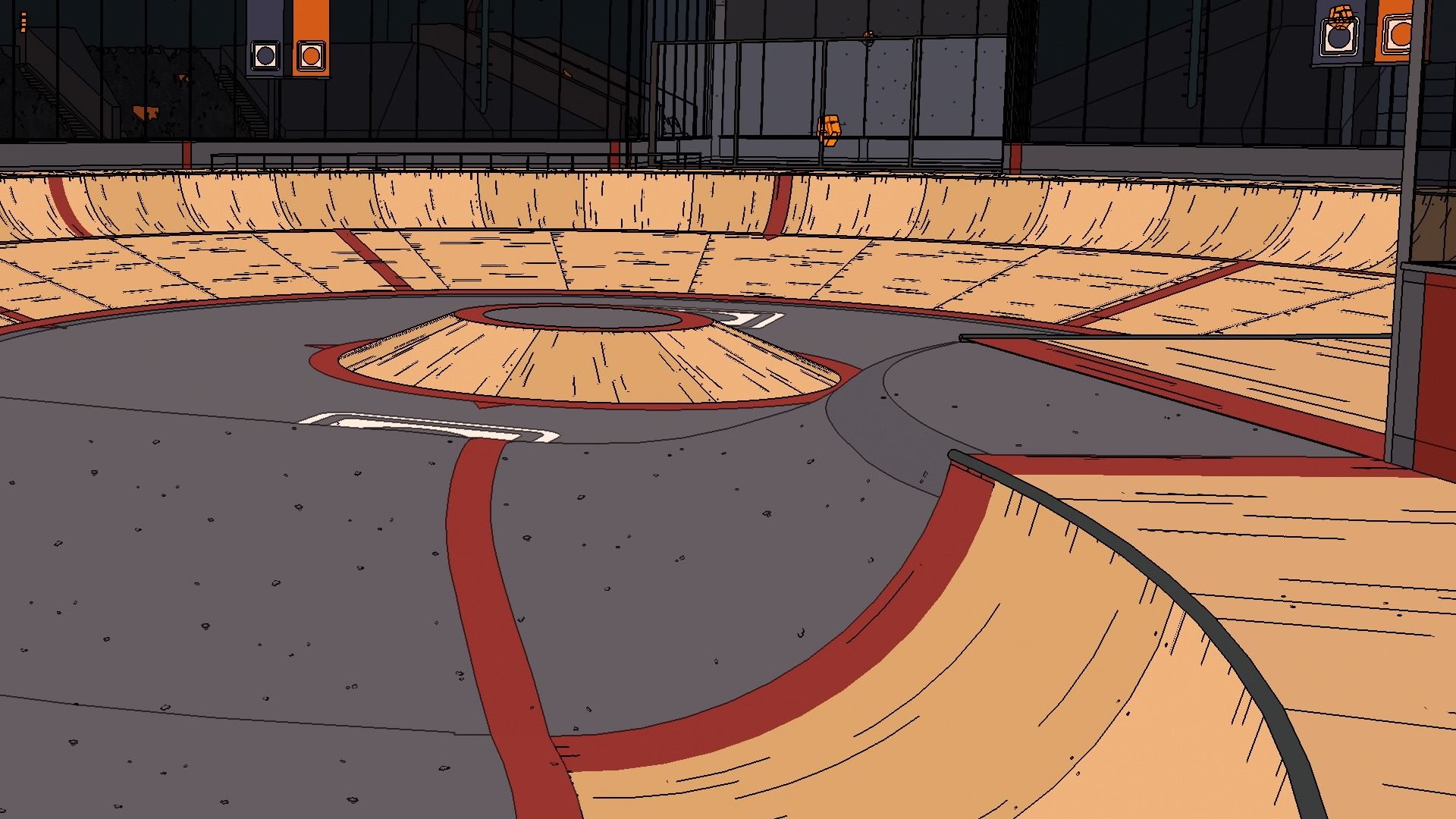 The Matterhorn Arena is composed of two bowls, one large and one small. There is also a half-pipe behind a glass wall. Upon starting the stage, the mini-bowl will be to your right, and the half-pipe will be on your left. The rim of each bowl acts as a rail. The rail on the large bowl is only interrupted by the transition into the small bowl. In the center of the large bowl, there is a circular ramp that you can launch off of. All in all, it is a pretty simple stage that is perfect for getting your feet wet. 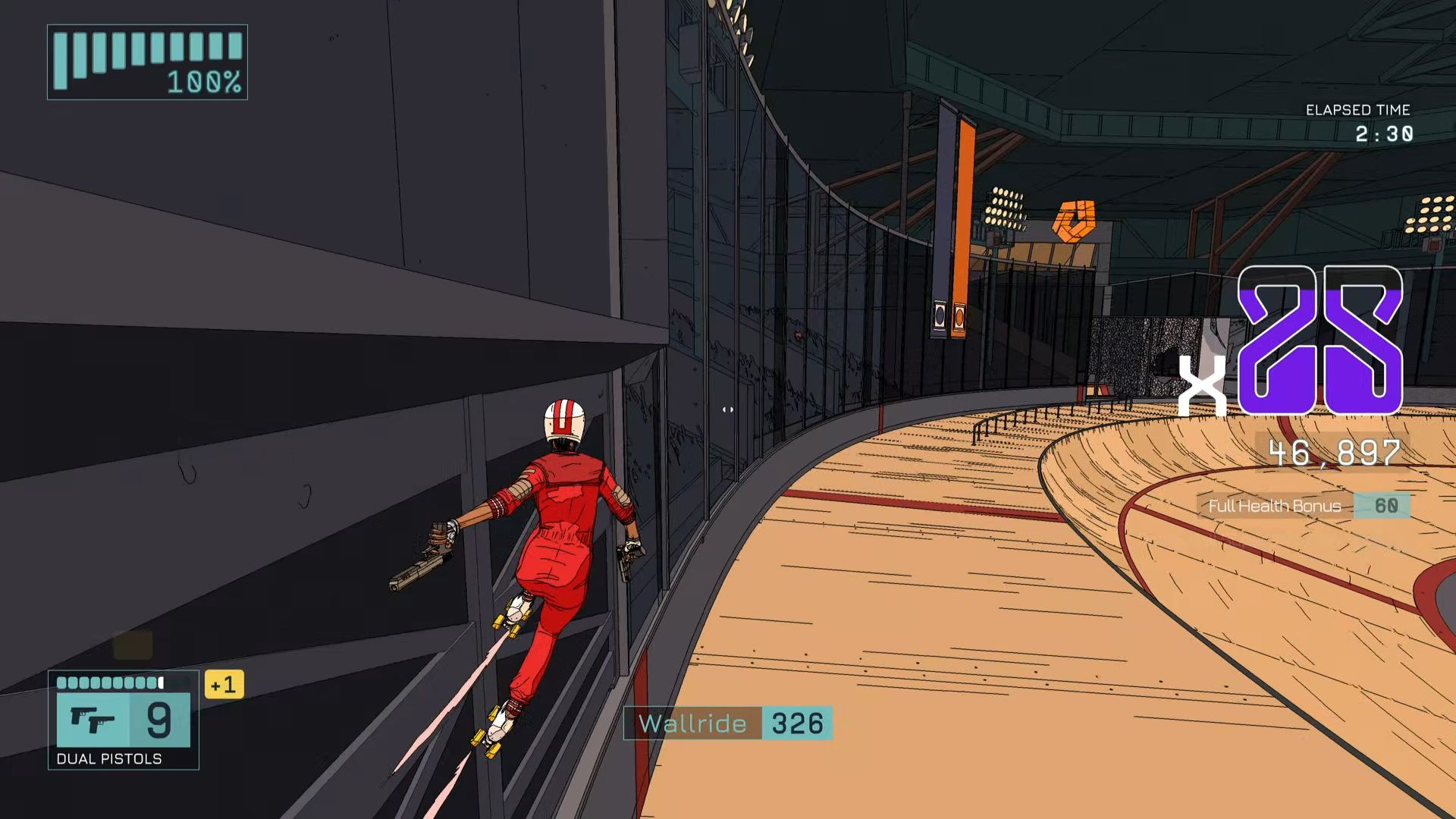 The challenges in the Matterhorn Arena are largely pretty simple. However, they do act as an excellent opportunity to help you acquaint yourself with the game's basic mechanics. By working your way through these challenges, you will be better equipped to face the stages that follow this one. Don't take this stage for granted; as, after this one, things are immediately going to get spicier!

This is a pretty dead simple task; it seems to exist just to make sure you remember where the Reflex Time button is. Your reflex time bar will recharge passively. It recharges pretty quickly, so use it liberally.

Perform and Grind Trick And Perform a 3x Combo 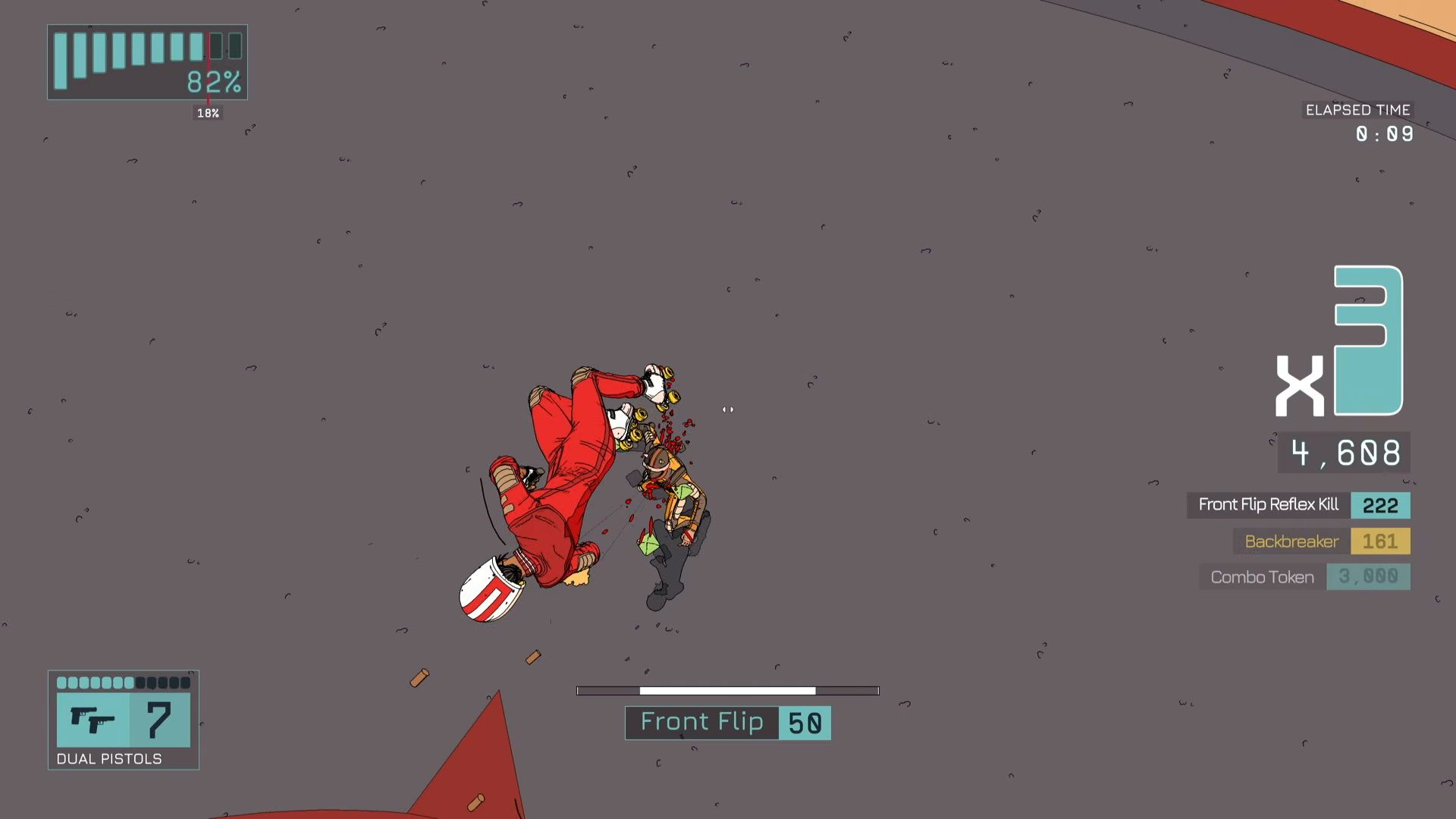 Okay, it can’t get more basic than these two. Just grind on the rim of the bowl to complete the first challenge and as you are grinding around, you will come close enough to GRUNTs for your gun to lock onto them. Use your Reflex Time to shoot them dead. If you do this right at the beginning of the stage, there are enough grunts to get your three-kill combo. As long as you are on the rail, your combo will not subside. During a straight run, hop up and start a new Grind Trick (this will refill your ammo).

This task exists to reinforce the dodge button. If you are struggling to get the timing of the Grunt’s swing, you can use your Reflex Time to slow the action to a crawl when you are close to him. Dodging is an extremely important aspect in Rollerdrome. Especially since it is necessary to enter into the Super Reflex Time (but you'll learn more about that later). 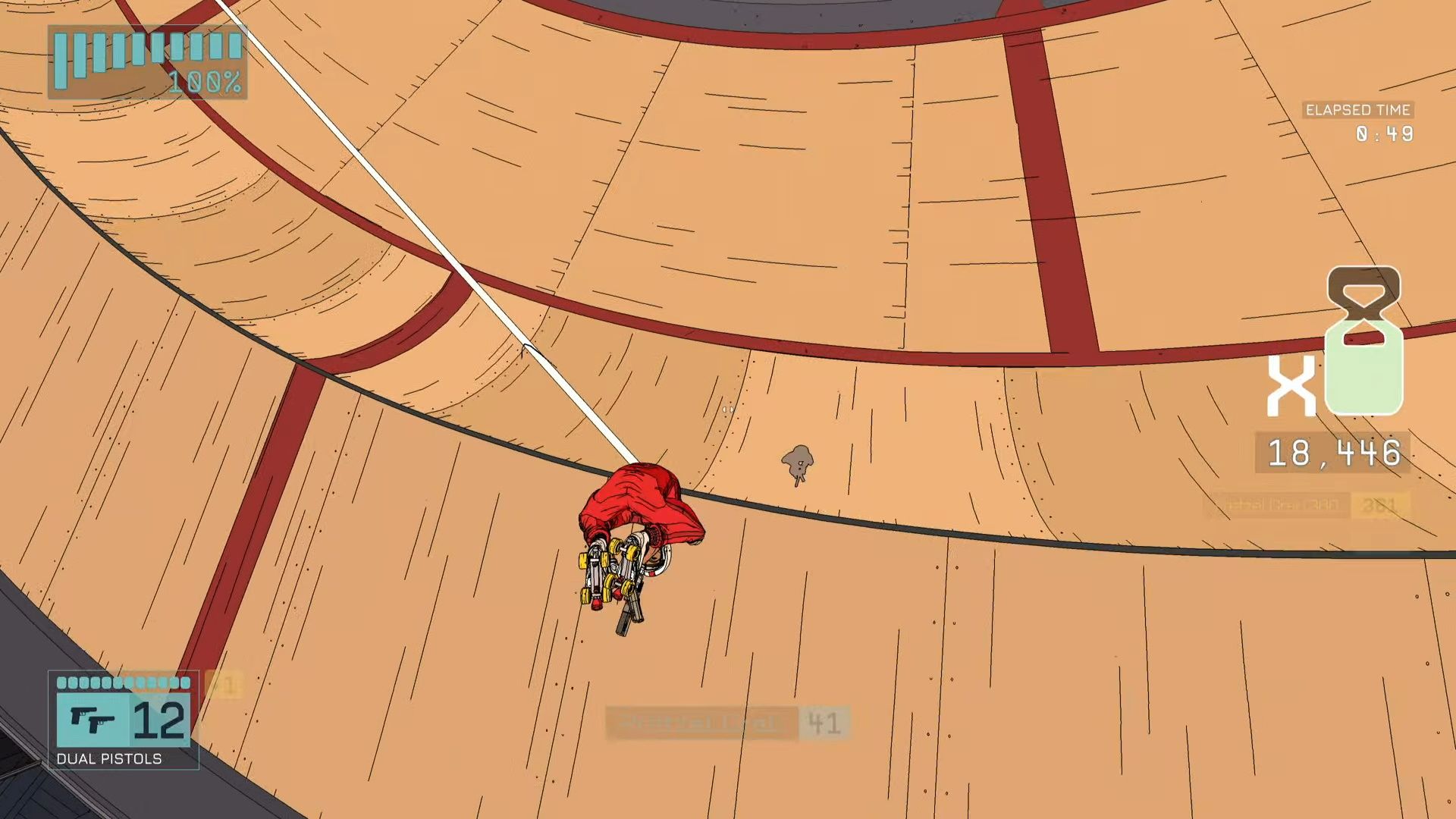 As soon as the Sniper’s sight is on you, a dodge will shake them. There are two phases to being sighted. If the laser is red then you have tons of time, if the laser turns white you need to dodge NOW.

Eliminate a SNIPER while airborne

Most of the Snipers will be positioned along the rim of the bowl. The best way to handle this challenge is to just charge toward one of these Snipers, run right up the ramp, and use your reflex time midair. Once you are frozen midair, pump the Sniper full of bullets. If you have a full clip, that will be enough to take them out.

Perform a Grab Trick by the Trick Token 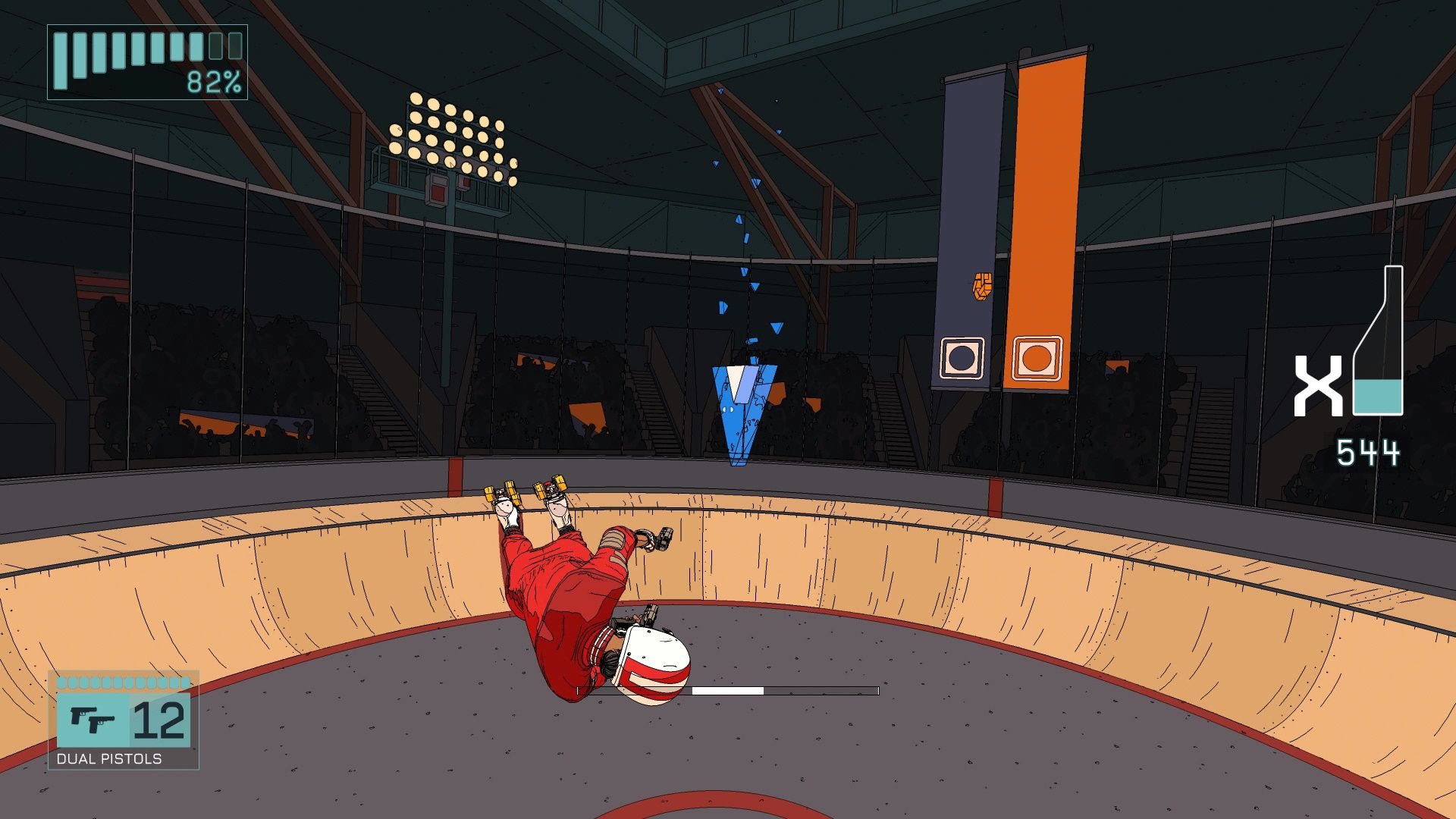 So, all you need to complete this challenge is to do ANY grab trick near the Trick Token. That just means pressing the grab button while airborne. The Trick Token is located in the transition area that leads into the mini-bowl to the right of where you start the stage. You don’t need to come in direct contact with the Token to achieve this challenge, you just need to be relatively close.

How To Collect All 5 Combo Tokens 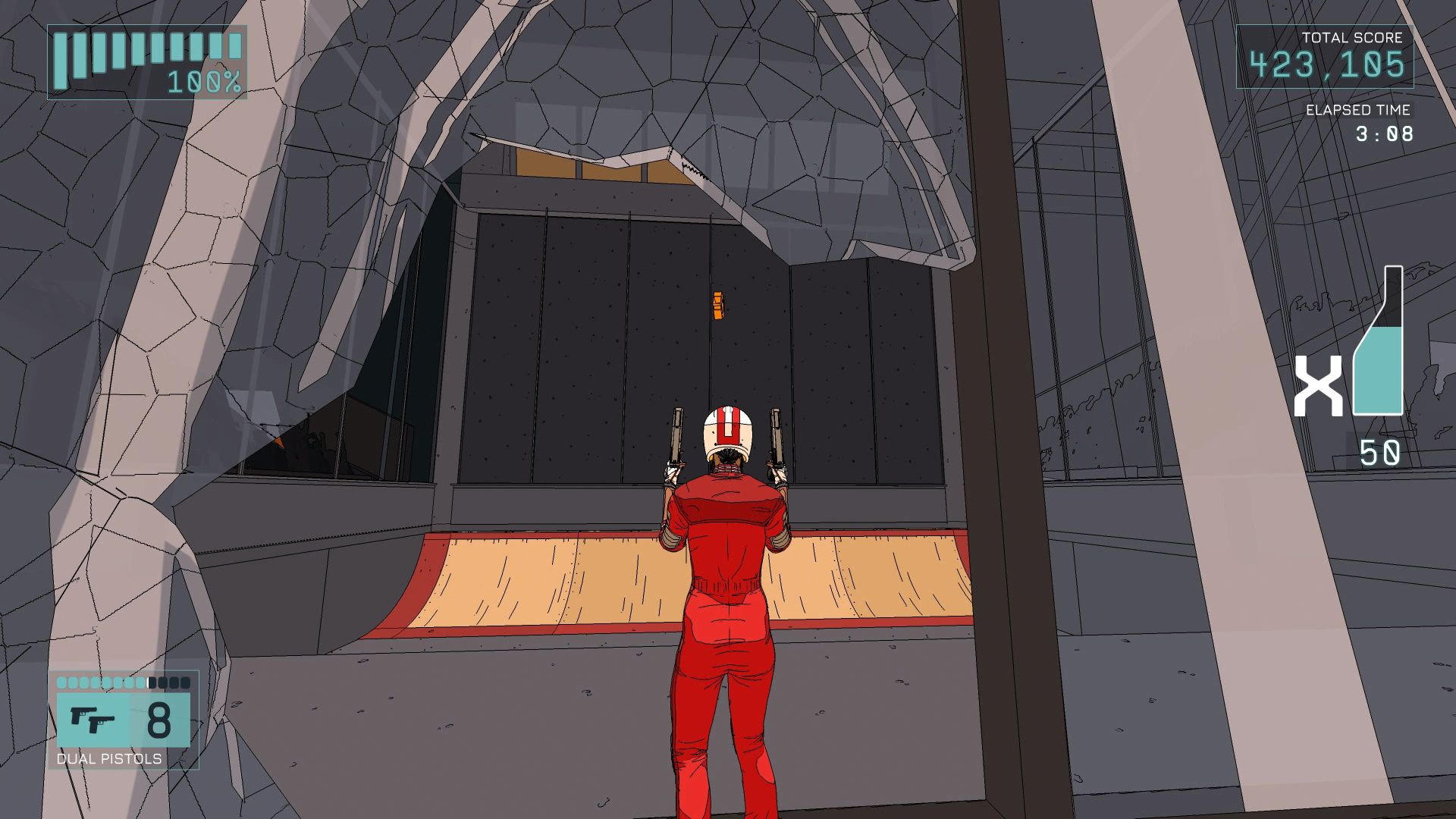 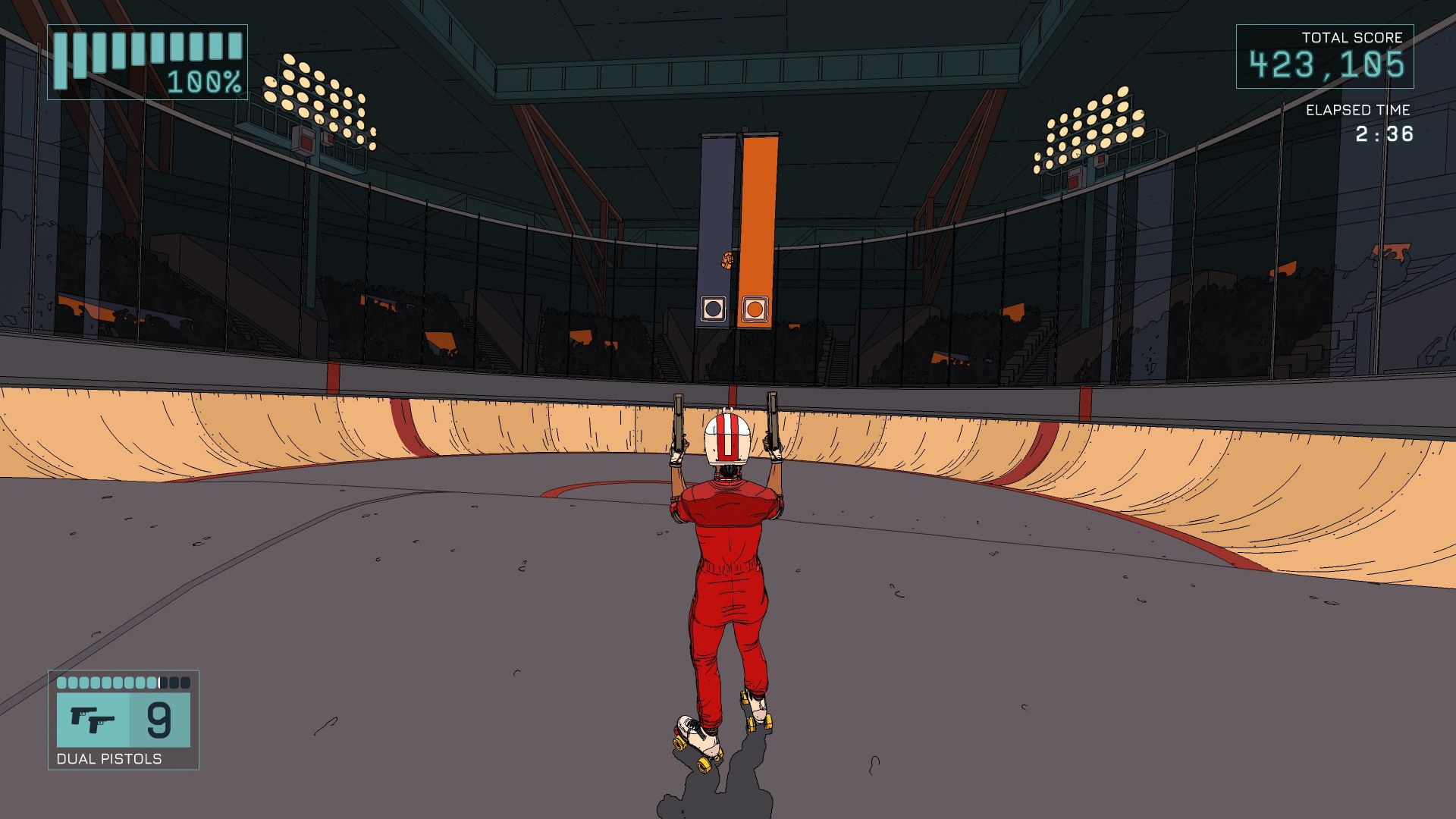 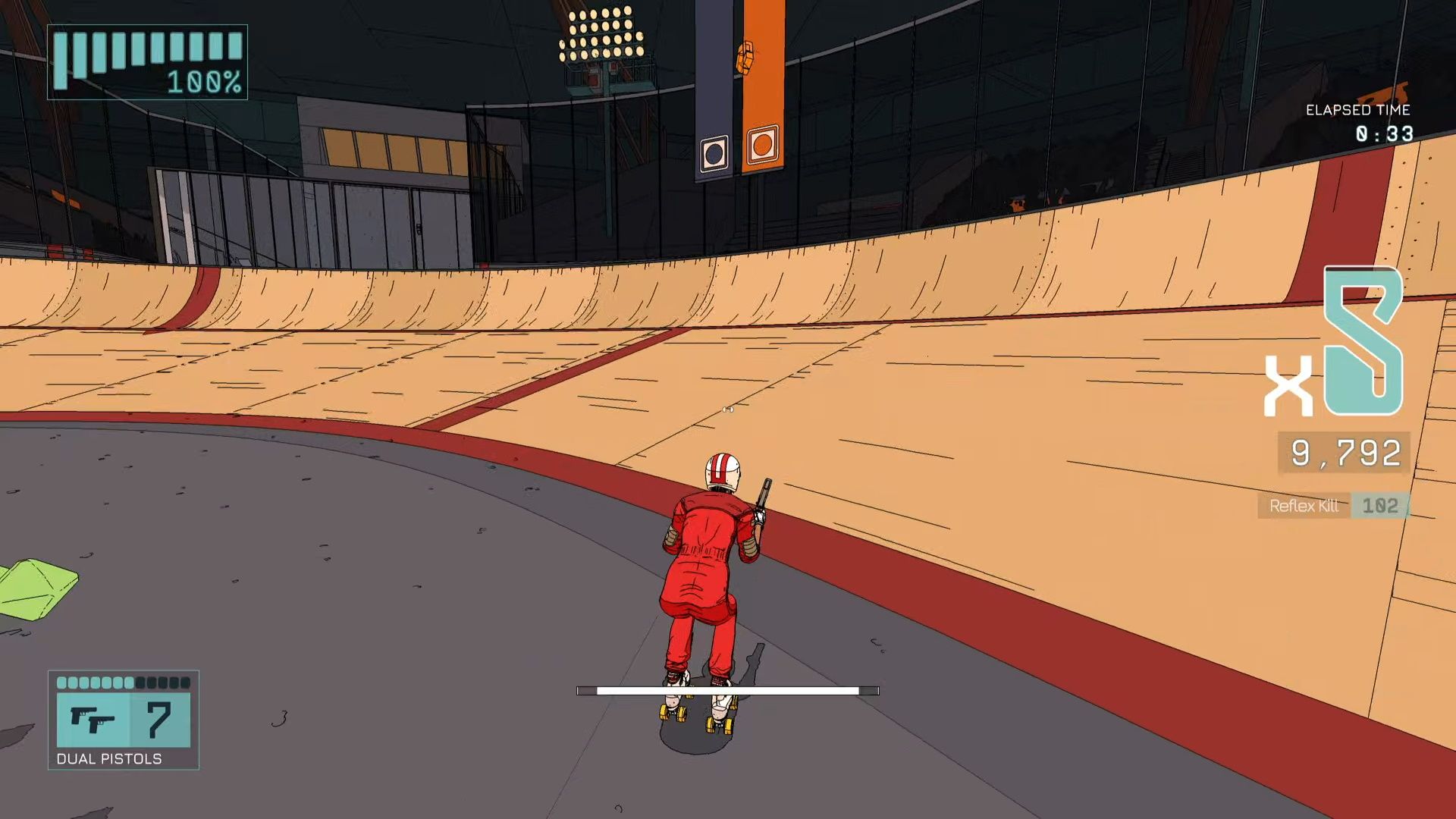 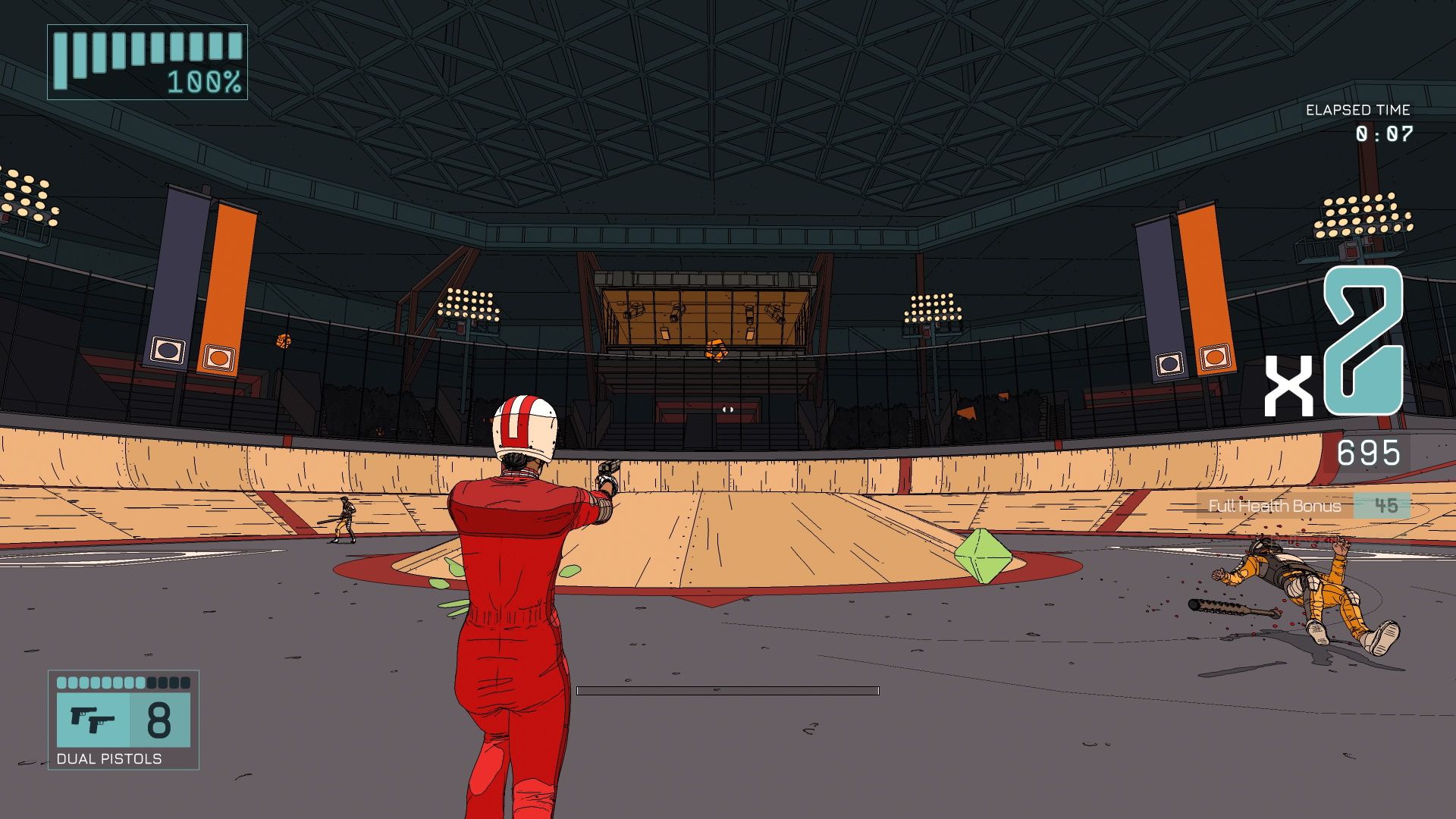 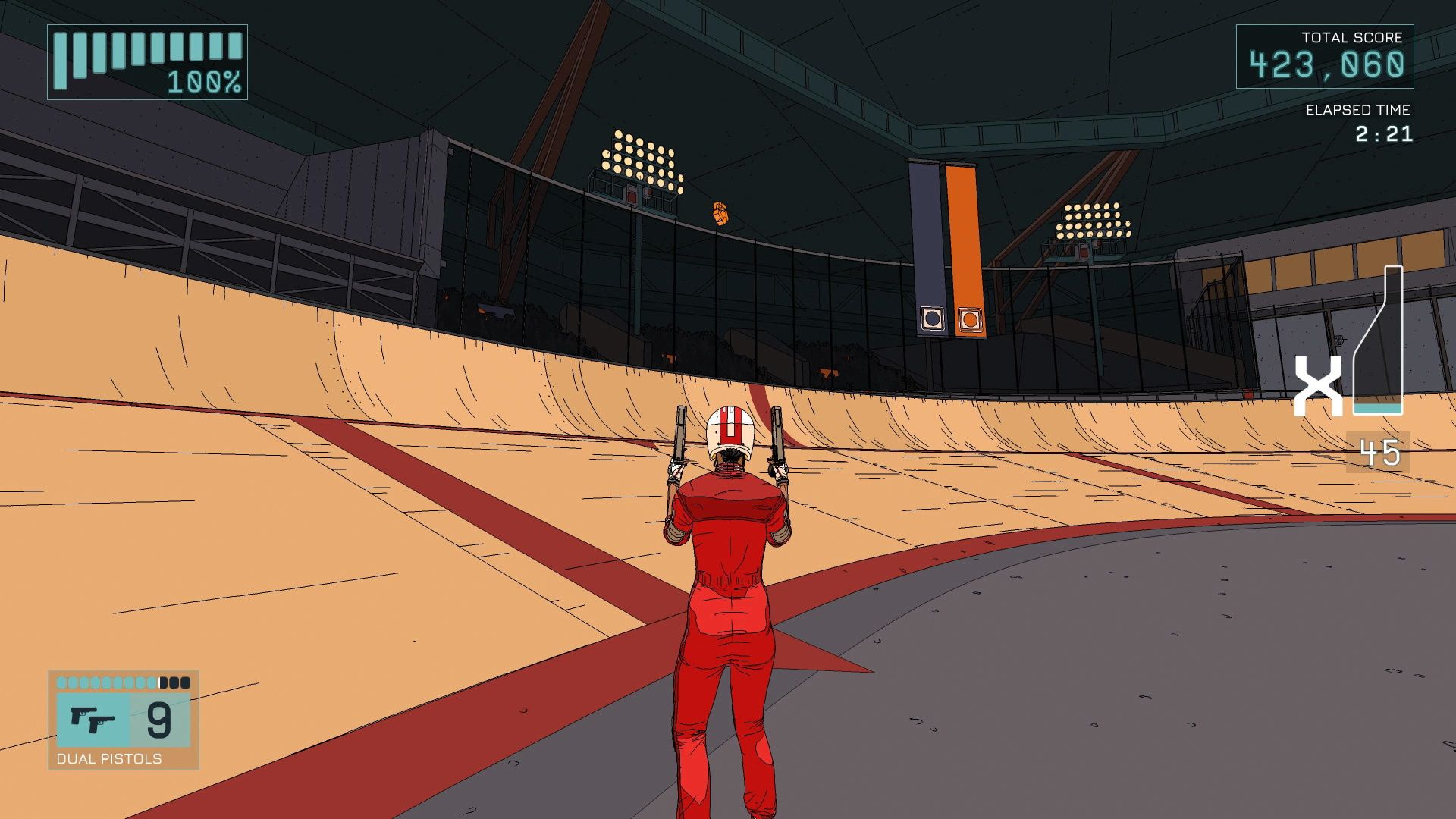 For acquiring the Combo Tokens that are hovering above the bowls (and the half-pipe) you just need to ride up the wall of the bowl, using it like a ramp, and release the jump button near the lip. This will give you more than enough air to grab these tokens. Just line yourself up with the token from a distance and hit the ramp at full speed. Don’t worry, you pick up speed pretty quickly in Rollerdrome.

For the Combo Token hovering above the ramp in the center of the bowl, just ride toward it and launch off the side opposite the token; you will carry straight through it.

You may want to just get these Combo Tokens out of the way, but keep in mind that, as the name suggests, these tokens do add to your combo counter. So, if you are chasing a high score, you are going to want to incorporate them into your routine.

Okay, here is the trickiest section. We are going to give you advice on how to beat Morgan Fray’s record, as that will obviously take out Yan’s record as well. So, one thing to keep in mind is that hitting a Combo Token will, unsurprisingly, increase your combo count. We are going to be looking to keep that combo counter climbing. In order to do that, you need to get kills before the combo timer runs down on your current modifier.

Your use of your Reflex Time is going to be pivotal here. One thing to note is that the timer will never fully deplete if you are mid-trick. That counts for grinds. So, if you are too far away from an enemy start grinding the lip of the big bowl until you get close enough to an enemy to get a kill. This tactic will save you in a pinch. However, if a Sniper aims at you, and you dodge while your current modifier is about to expire, then that will count as disrupting your grind and your combo counter will reset. 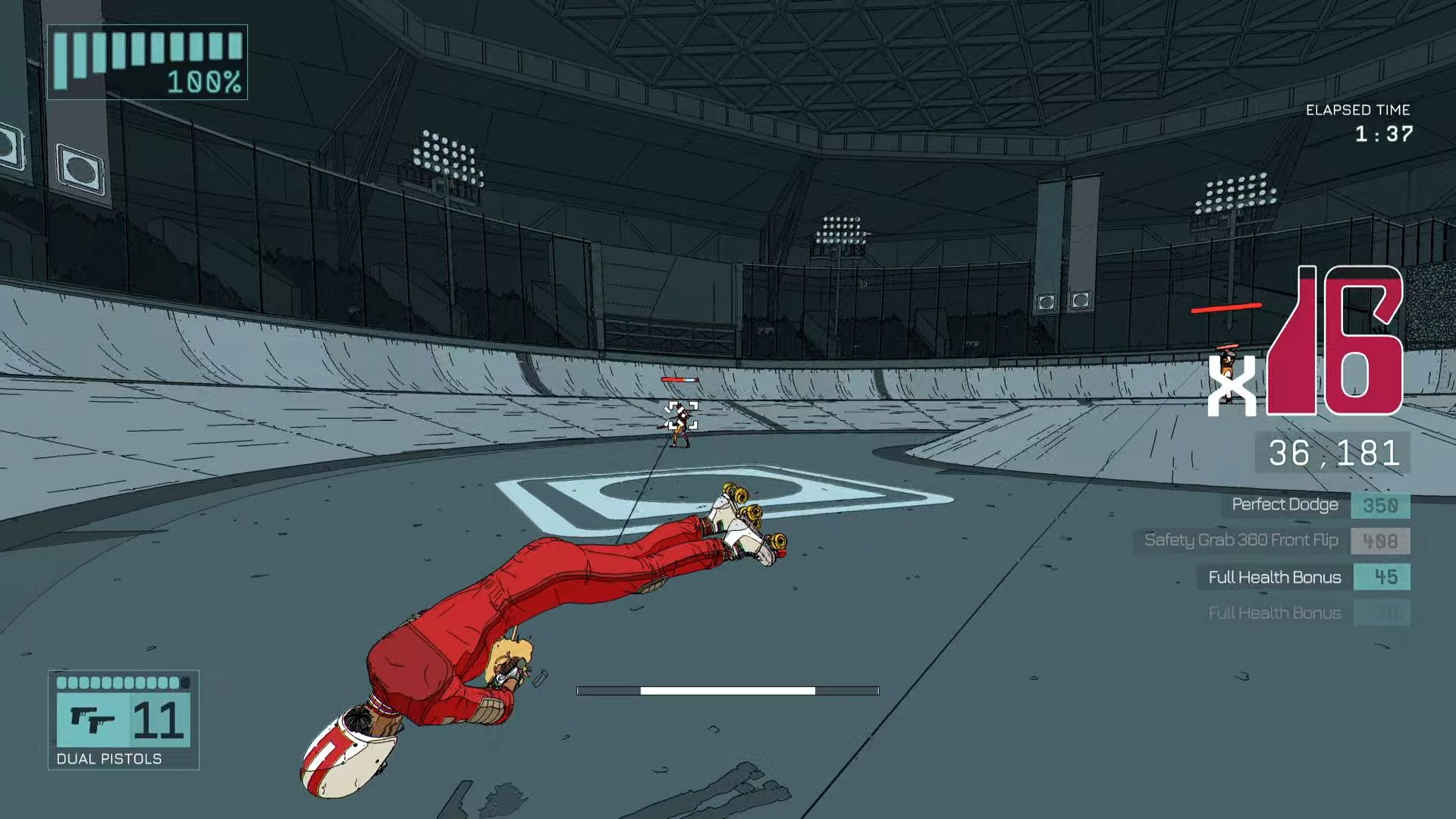 Another thing to keep in mind is that the point value of every trick decreases with repeated uses. So, you are going to be far better off using distinct tricks as frequently as possible. In general, you should be trying to hold these tricks as long as possible; try to do most of your shooting while on the ground. There are a grand total of 27 tricks in the game, so you should be using different ones nearly every time you launch into the air or grind a rail. 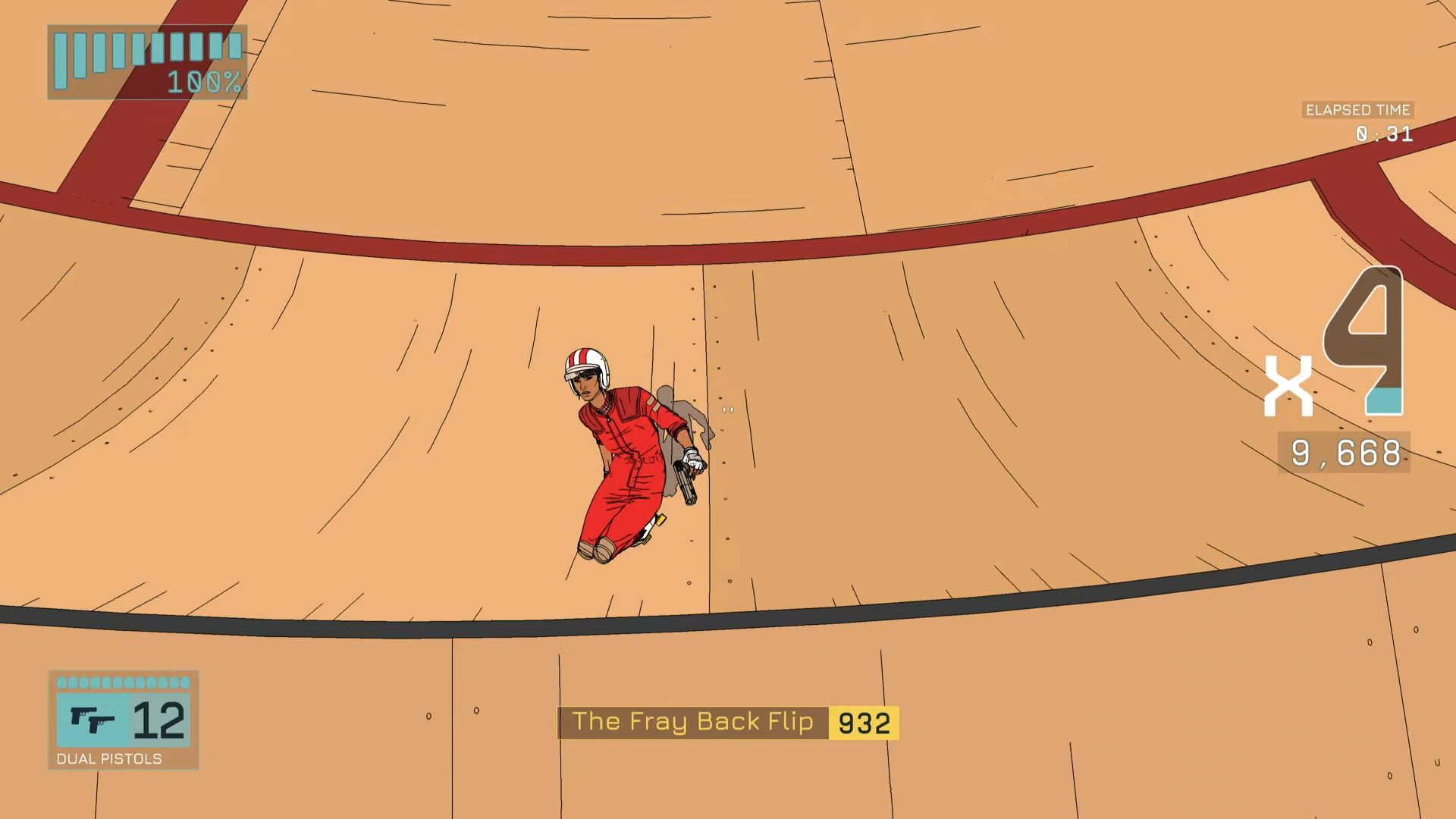 Another thing that you need to take into consideration is your time. There is a Par Time. If you go over that, you will be deducted points, but, on the positive side, being under that time will earn you bonus points. We experimented with doing the stage as quickly as possible. Upon finishing the stage with a time of 1:16, we were awarded with an additional 154,650 points. So, there are some serious rewards for players who complete the stage quickly. 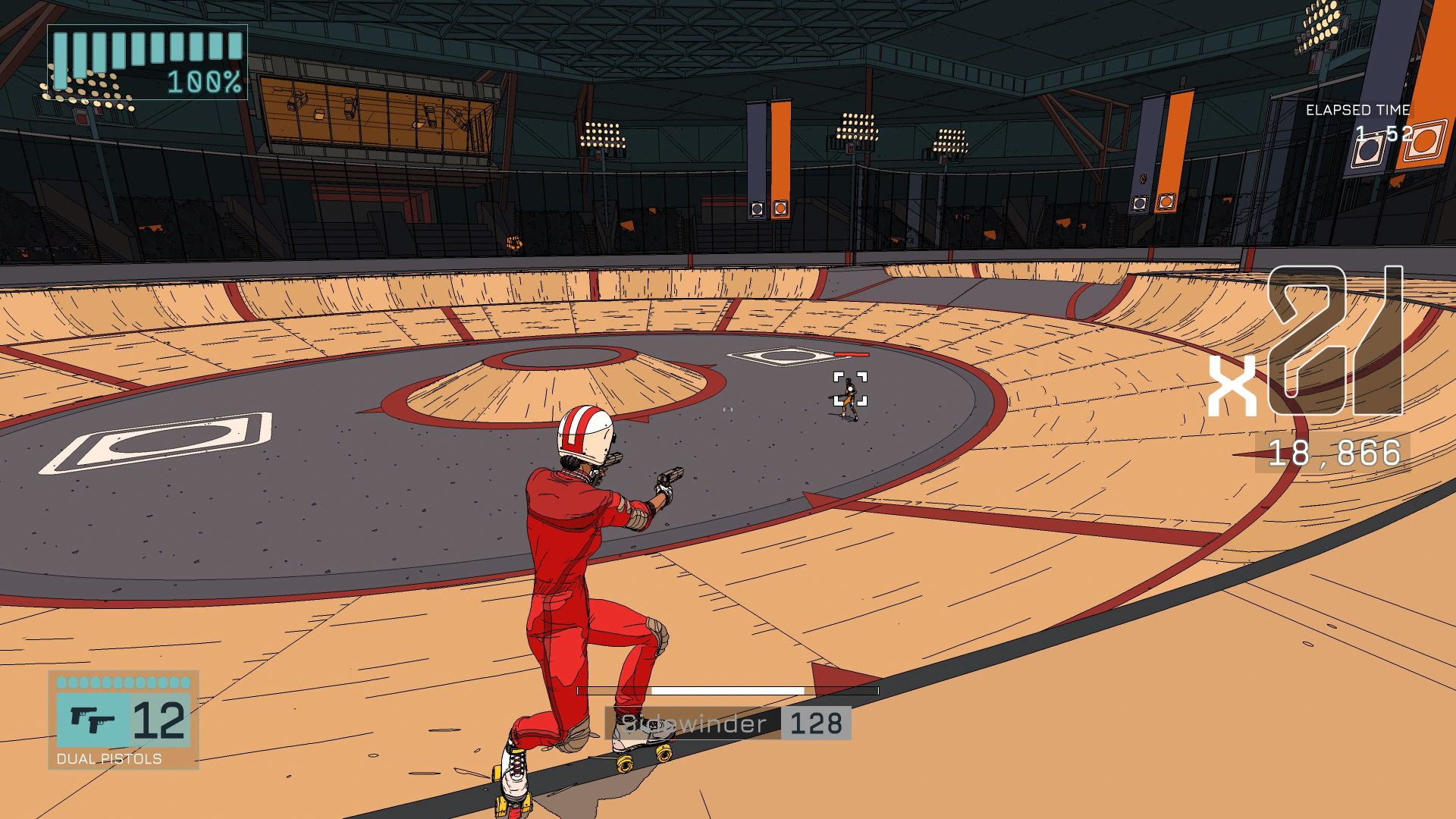 Since Matterhorn Arena is a giant bowl, you are going to have a pretty simple pattern. Perform a trick to replenish your ammo (preferably a different trick every time), then shoot two enemies if they are Grunts, or one enemy if they are a Sniper, and then roll up the side of the bowl and perform another trick to, once again, replenish your ammo. Rinse and repeat.

You are going to want to work in those Combo Tokens as well. If you find that you are far away from an enemy, and your combo is about to expire, grind the primary bowl's lip (as long as you maintain that grind your combo will not expire) and then once you are close enough to another enemy, pop your Reflex Time and shoot them while grinding.

This strategy should deliver you a score substantially above Morgan Fray’s even if you mess it up once or twice, or miss a Combo Token or two. While that 300,000 goal may seem brutal at first, you will see that it is a very reasonable achievement once you get a half-decent combo going.