The creators of Rock Band and Dance Central at Harmonix Music Systems are launching a music-mixing game called Fuser.

NCSoft is publishing the game made by Harmonix, which continues to be the bastion of music games for fickle video game fans who, once upon a time loved games like Guitar Hero and Rock Band.

With Fuser, you get to choose from a number of tracks and controls where you make new music on the fly. If you can keep the audience in the giant concert hall cheering, then you score big in the game. If you’re a DJ fan, you’ll probably like this game. I watched various videos of different creations, and they sound pretty good.

The game will debut in 2020 for the consoles and the PC. The game puts players in control of the music, where they can fuse together elements from hit songs by some of the world’s top artists, including Billie Eilish, The Chainsmokers, Imagine Dragons, Lil Nas X, Lizzo, Migos, Post Malone, and many more.

FUSER will release this year on the PlayStation 4, Xbox One, Nintendo Switch, and Windows PC. 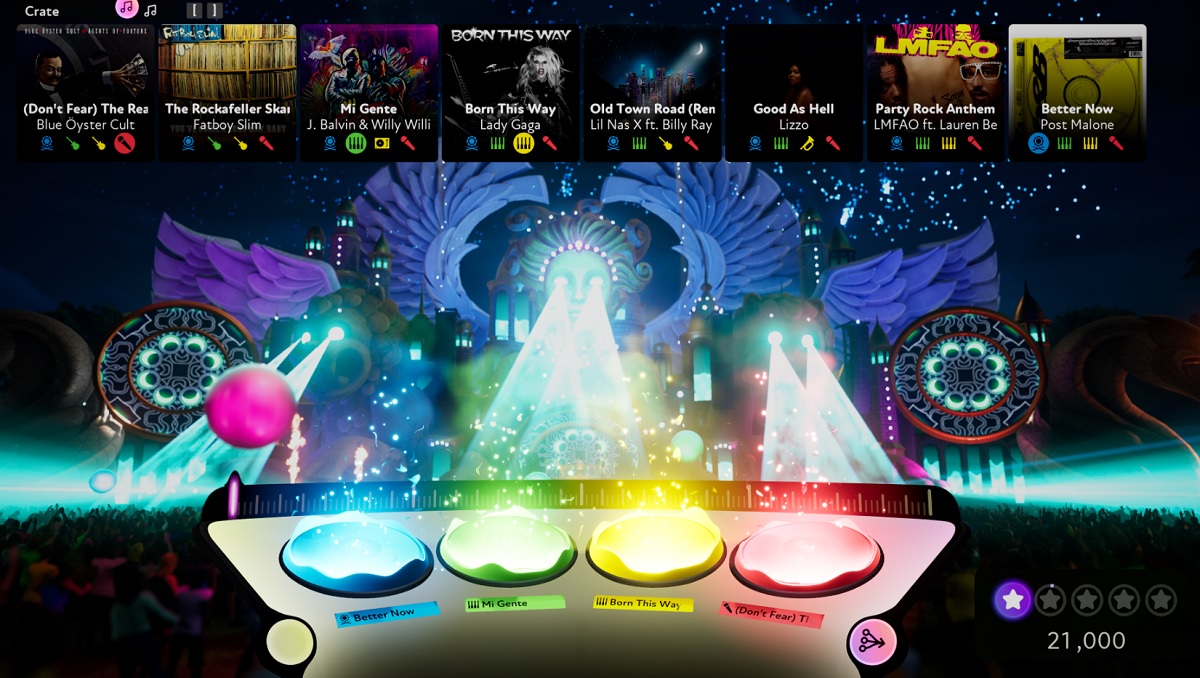 Above: Fuser has some simple controls that are reminiscent of Rock Band.

Harmonix has been a pioneer of interactive music gaming for nearly 25 years, having created titles like Frequency and Amplitude as well as genre-defining, breakout hits like Rock Band and Dance Central. But the music games business grew to a billion dollars a year and then fell like a rock as players got tired of fads like plastic guitars.

With Fuser, Harmonix wants to once again completely revolutionize the music game genre by providing an immersive music sandbox in which players are challenged to perform and create custom mixes from some of music’s biggest hits — no peripheral required.

Steve Janiak, CEO of Harmonix, said in a statement that the goal is to create the ultimate music game. For today’s music fans, music is more like an experience. It’s not just people listening to albums any more — it’s recording and sharing videos of you singing along to your favorite songs, watching your favorite bands play at festivals, and sharing hit music with your friends, Janiak said. 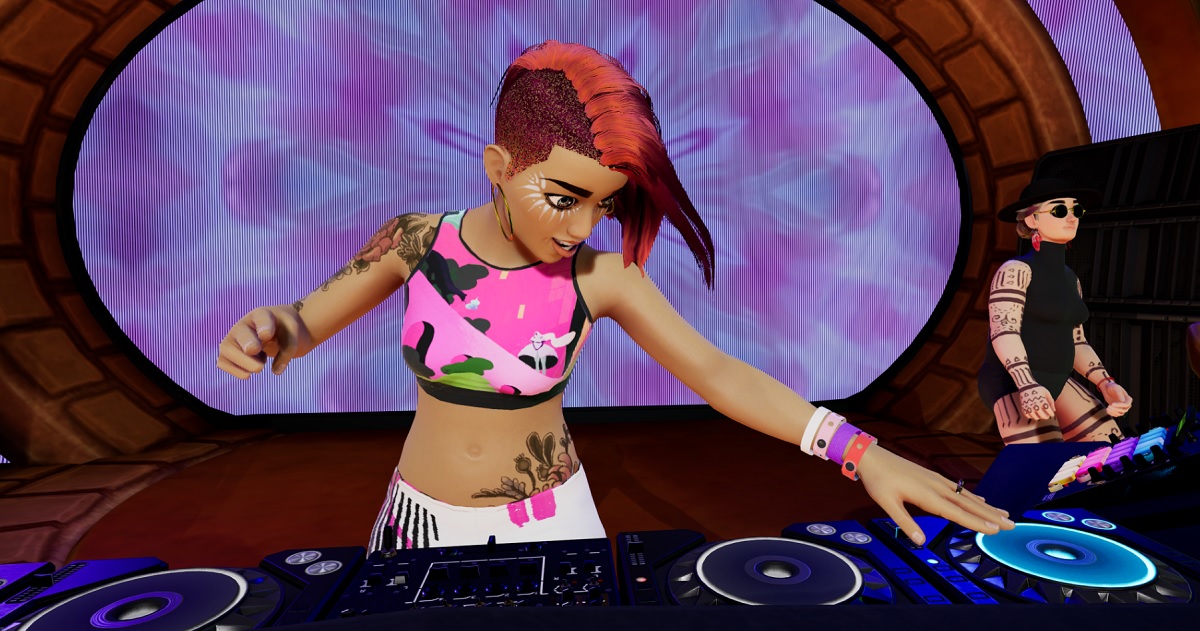 Above: You’re the mixer in Fuser.

Fuser tries to put players at the center of all that by letting you mix and share some of the biggest hits so you can fulfill the fantasy of becoming a festival headliner.

Powered by Harmonix’s proprietary technology, Fuser will allow players to blend vocals, bass lines, and other instrumentation from different music genres and artists to define their own unique sound. Players will also be able to share their creations socially, making their game performances available for watching online.

The game is a departure for publisher NCSoft, a South Korean company that has grown huge on titles such as Lineage. But the company has been expanded in the West for sometime. Songyee Yoon, CEO of NCSoft, said in a statement that the team knew the game was special where they first saw it. He said it takes the amazing developer pedigree that Harmonix has developed over decades and distills the essence of creating, listening to, and sharing music where every player can be their own star.

More than 100 songs will be included in the game. Attendees at PAX East in Boston will be the first to try a Fuser demo. The final track listing will feature songs from the world’s top artists in pop, rap/hip-hop, R&B, dance, rock, country, Latin, and Caribbean music. 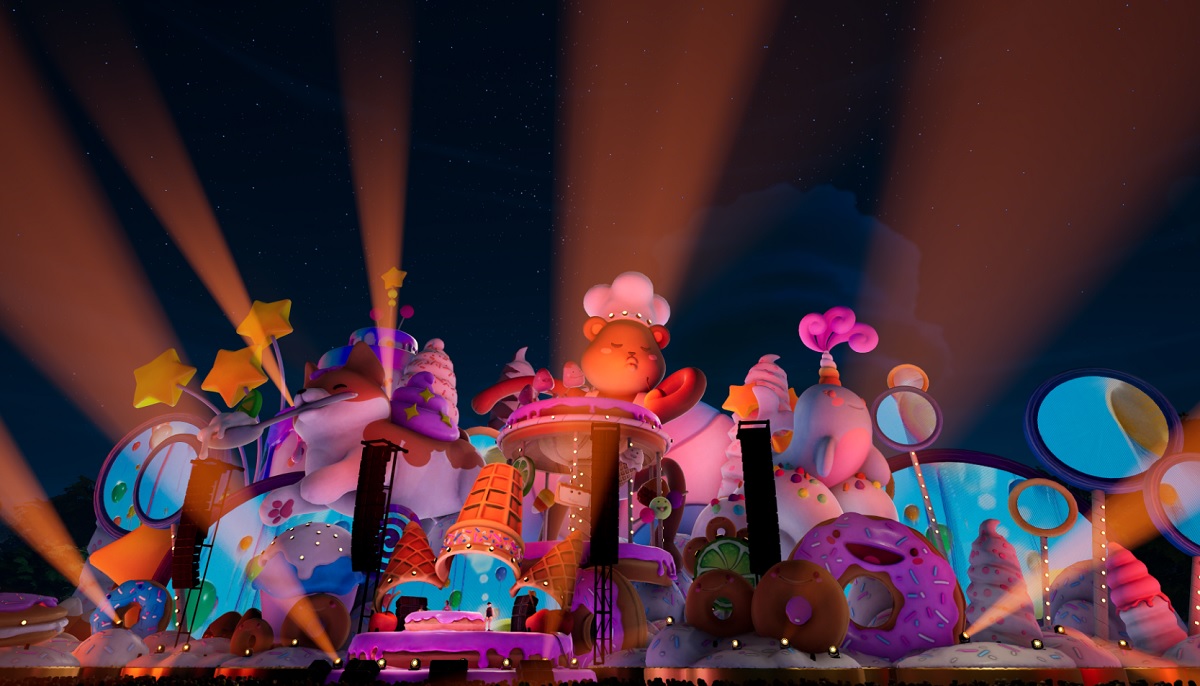 Above: Harmonix’s Fuser is an explosion of color.