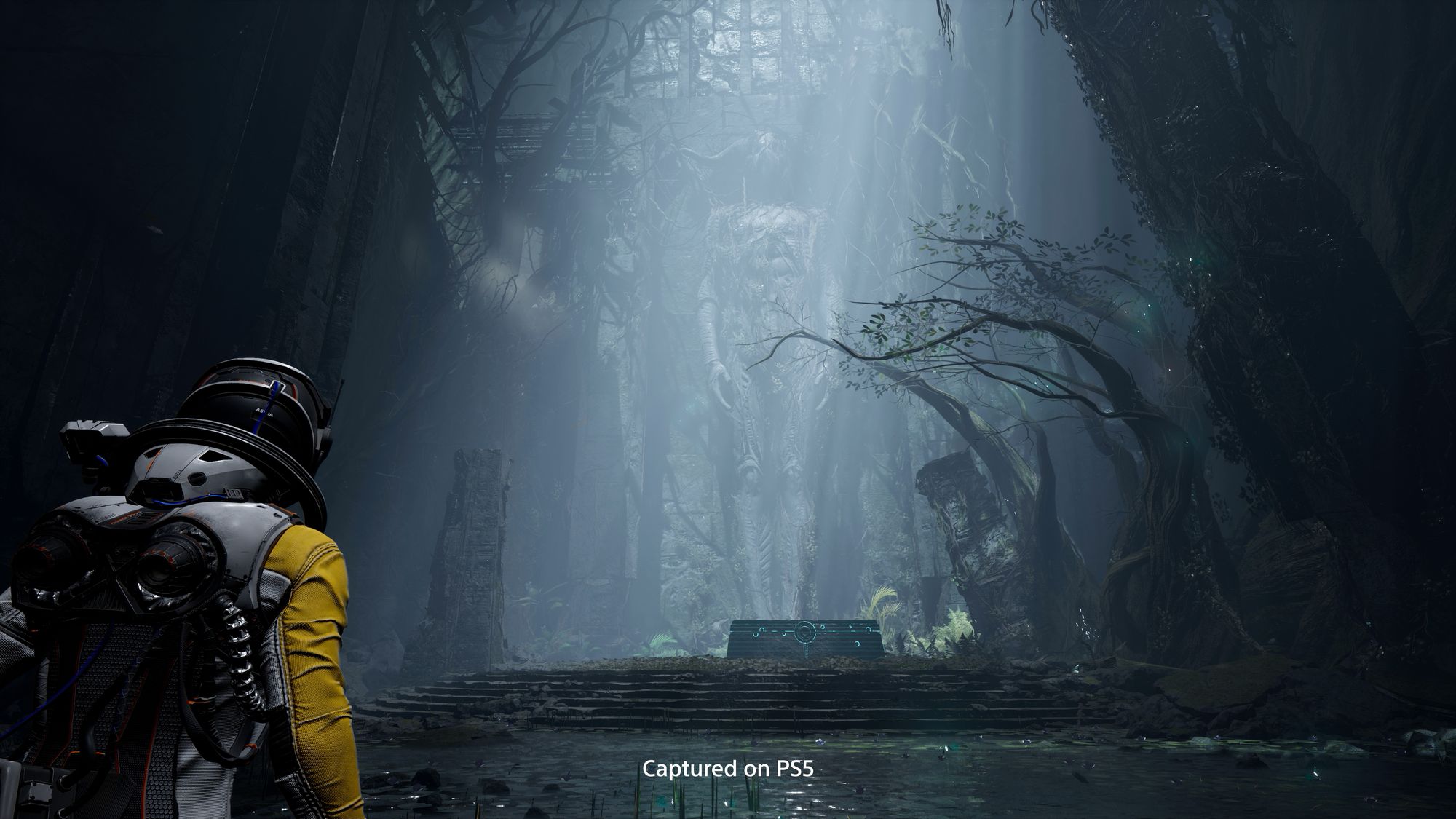 Sony’s latest PS5 exclusive is from the creators of Stardust and Resogun and features the most entertaining time loop since Groundhog Day.

There has already been one first party PlayStation 5 exclusive this year, in the form of Destruction AllStars, but since that was initially free we’re sure Sony would be the first to suggest that it doesn’t really count (since it’s also not very good). If you grant them that then it means they currently have a 100% record in terms of quality PlayStation 5 exclusives. But given the curious lack of pre-release promotion we’re sure many don’t know what to expect from Returnal. That’s not an easy thing to answer but it involves joy, pain, wonder, confusion, and Sony’s best new franchise since The Last Of Us.

Returnal is by Finnish developer Housemarque who, despite a rather short gameography, have been going since the Amiga demo days of the early 90s. They’re best known for PlayStation indie titles Stardust and Resogun but unfortunately not for the excellent Nex Machina, a fantastic top-down shooter whose commercial failure led to them foreswearing the development of old school arcade games. That was upsetting not just because they’re so good at them but because of the obvious difficulty, and financial risk, of transitioning to more complex AAA titles.

They first tried to jump aboard the battle royale band wagon with Stormdivers but stopped working on it, and all other projects, to concentrate on Returnal. They essentially bet everything on a completely new property, something companies many times their size never dare to do. That gamble has paid off handsomely, though, with a game that marries the best of old school arcade gameplay with elements of roguelikes, Metroidvania, and surprisingly serious storytelling. The end result won’t be for everyone but it’s an absolute triumph nonetheless.

Returnal may be a brand new IP but its heady mix of influences are clear to see. A cross between Dark Souls and Metroid Prime is probably the simplest way to describe the game, but the structure is that of roguelikes such as Hades and Dead Cells, while the third person gunplay also folds in aspects of bullet hell 2D shooters. There are smaller steals from other games, such as the active reload system from Gears Of War, but, despite the third person view, it’s definitely Metroid Prime that comes across as the primary inspiration.

The story is also an unlikely mishmash of influences, from H.P. Lovecraft to Stanisław Lem, with very little information given at first. All the intro reveals is that you play astronaut Selene, who crash lands on an alien world full of angry, tentacled monsters that seem to have wiped out the original inhabitants. When Selene inevitably dies, she finds herself waking up from the crash once again, with (almost) everything reset back the way it was, in true roguelike fashion.

The game isn’t plot heavy but continuing revelations see you begin to question Selene’s past and her state of mind before and after the crash, although we’d warn you in advance that the ending leaves a great deal up to your own interpretation and is unlikely to fully satisfy anyone. Thankfully the gameplay suffers no such fault.

Although Housemarque has no real experience with third person action games the first thing you realise about Returnal is what a great shooter it is. The gunplay feels fantastic and while Selene lacks the athleticism of a game like Vanquish the 2D shooter influence works superbly well, given that by dashing you can pass unharmed through most enemy projectiles. Together with a powerful melee attack, that’s necessary to take down shields, Returnal would’ve worked perfectly well as a straight action game, as you create an unscripted ballet of beautiful violence during every encounter.

The action is only part of the game though, as there’s also a strong exploration aspect, with each biome split up into discrete rooms, complete with Metroid style doors separating them. Monsters can pass between the doors, but usually don’t, so this definitely isn’t open world. Although many of the rooms don’t contain any enemies at all, but instead platform sections and other obstacles that hide helpful items.

When you die you lose everything except a resource called ether and, once you hit a particular point in the story, a certain amount of proficiency, which dictates the minimum level of whatever weapon you pick up from containers. It’s not quite as straightforward as that though, as once you collect a new type of weapon it enters the random rotation of those you can obtain in a subsequent run. The weapon upgrades which you unlock by using that particular gun are also retained between loops of the game, although those upgrades are always randomised so you rarely get exactly the same weapon twice.

Artifacts which grant all manner of perks and benefits work in a similar way, in that you have to purposefully unlock the better ones, that then become random pick-ups in subsequent loops. That’s all relatively generous for a roguelike, especially as you can also unlock shortcuts to other biomes, but there’s no question that having to start almost from scratch each time you die is going to frustrate some people, especially as the game is very hard.

When a new loop starts the layout of each biome also changes, although rather than being procedurally-generated each room is handcrafted – they’re just remixed and switched around at random, so you can never predict exactly what you’ll face on a subsequent run.

There are a great number of other, welcome, complications, including parasites which grant both a positive and negative trait – with you having to choose which outweighs the other. Many objects and containers are ‘malignant’ and risk causing a suit malfunction (i.e. a debuff) if you pick them up, which then has to be removed by completing a specific task, such as crafting an item or using a one-shot collectible.

It’s a complex mix of systems and gameplay styles but it runs almost like clockwork, each element of gameplay enhancing the other. There is the occasional exception though, where if you’re unlucky it can be halfway through the opening biome before you find a decent new gun and if that’s compounded by you encountering an unusually strong enemy a run is ruined before it’s even begun.

We’re also not huge fans of the creature design, which seems to be primarily inspired by Tom Cruise movie Edge of Tomorrow (which is a. seriously underrated and b. also about time loops), along with a soupçon of Avatar. The designs are fine in isolation, but the majority of enemies are covered in flailing tentacles and with the bigger ones it can be very difficult to work out which is which when you’ve only got a split second to decide your tactics.

These are relatively minor problems though and the only other issue is that pre-launch, the game is quite glitchy and we’ve had several crash bugs that have ruined otherwise promising runs. A day one patch promises to fix the issue but if it doesn’t then Sony are going to quickly find themselves in hot water.

In terms of the visuals, there doesn’t seem to be anything that wouldn’t be possible on the PlayStation 4, especially as the rooms are relatively small, but then this clearly doesn’t have the same budget as most internally developed Sony games. There are some nice-looking areas though, with great use of volumetric fog, and the DualSense is used fantastically well, in terms of the triggers and the haptic feedback – especially the pitter patter of rain on your gamepad.

In terms of difficultly we’re a little wary of making any definitive statement, as we’re still not sure whether the experience we had with the game will be similar to anyone else’s. Our first few hours saw plenty of deaths, but once things started to click we needed only two attempts at the first boss, before getting to the second biome. To our surprise we then managed to ace both that and the third one on our first attempt, including the bosses. None of it felt in the slightest bit easy but with a good store of power-ups and resources, and a healthy sense of paranoia, we persevered.

That was until a plot twist in the second act forcibly reset the loop and we lost all the items we’d steadily built up. From then on, we struggled through the rest of the game, making progress in slow, stilted steps that were much more reminiscent of playing Dark Souls. It was still fun but the elation of the first act, and the feeling of true mastery, required a lot more effort to rekindle. The plot twist is clearly a purposeful difficulty spike but there’s no question it’s a frustrating one.

What we would say though is that Returnal is by far the most fun we’ve had with a video game all year. Despite being a new IP it doesn’t always feel entirely original, given how liberally it borrows ideas from other games, but even when Lady Luck abandoned us we were always quick to get back up and try again. The action is perfectly crafted but the way it interfaces with the exploration and story aspects is just as impressive, as it creates an endlessly entertaining experience that we’d be playing again and again even if there was no time loop.

In Short: What should have been a hotchpotch of other people’s ideas, made worse by frustratingly high difficulty, is in reality one of the most cleverly designed video games of recent years, with superb action and endless replayability.

Pros: Excellent gunplay and movement system, with engaging exploration and a wide variety of customisation options. Good use of randomly generated levels and other roguelike elements. Ambitious storytelling.

Cons: Random factor can occasionally ruin a good run through no fault of your own. Odd difficulty spike could easily put some people off.