Home » News » PAX East 2020: Play God And Everything In Between In Project Witchstone

PAX East 2020: Play God And Everything In Between In Project Witchstone

CRPGs aren’t exactly dead (Divinity: Original Sin proved that), but there hasn’t been a large amount of them for a number of years. Back in the 90s, the likes of BioWare, Black Isle Games, and even Obsidian Entertainment were cranking out dungeon crawlers on an almost yearly basis. You had no shortage of games taking inspiration from Dungeons & Dragons and using those rulesets to create deep, immersive RPGs.

While we’re not suffering a drought anymore, the wait for Baldur’s Gate 3 might be quite a while. In the meantime, indie developer Spearhead Games has been honing its take on the genre that might lean more into D&D than even the best of BioWare’s output.

The whole idea with Project Witchstone -which is likely a temporary name-, is that there’s no concrete story or dedicated endpoint. You’ll create your own character and pick a desired goal, then set out into the world to achieve that. Drawing inspiration from tabletop games, there’s a dungeon master of sorts that will dynamically alter the story based on the decisions you make. You could even compare that to “The Director” from Left 4 Dead, just that there are way more variables at play here. 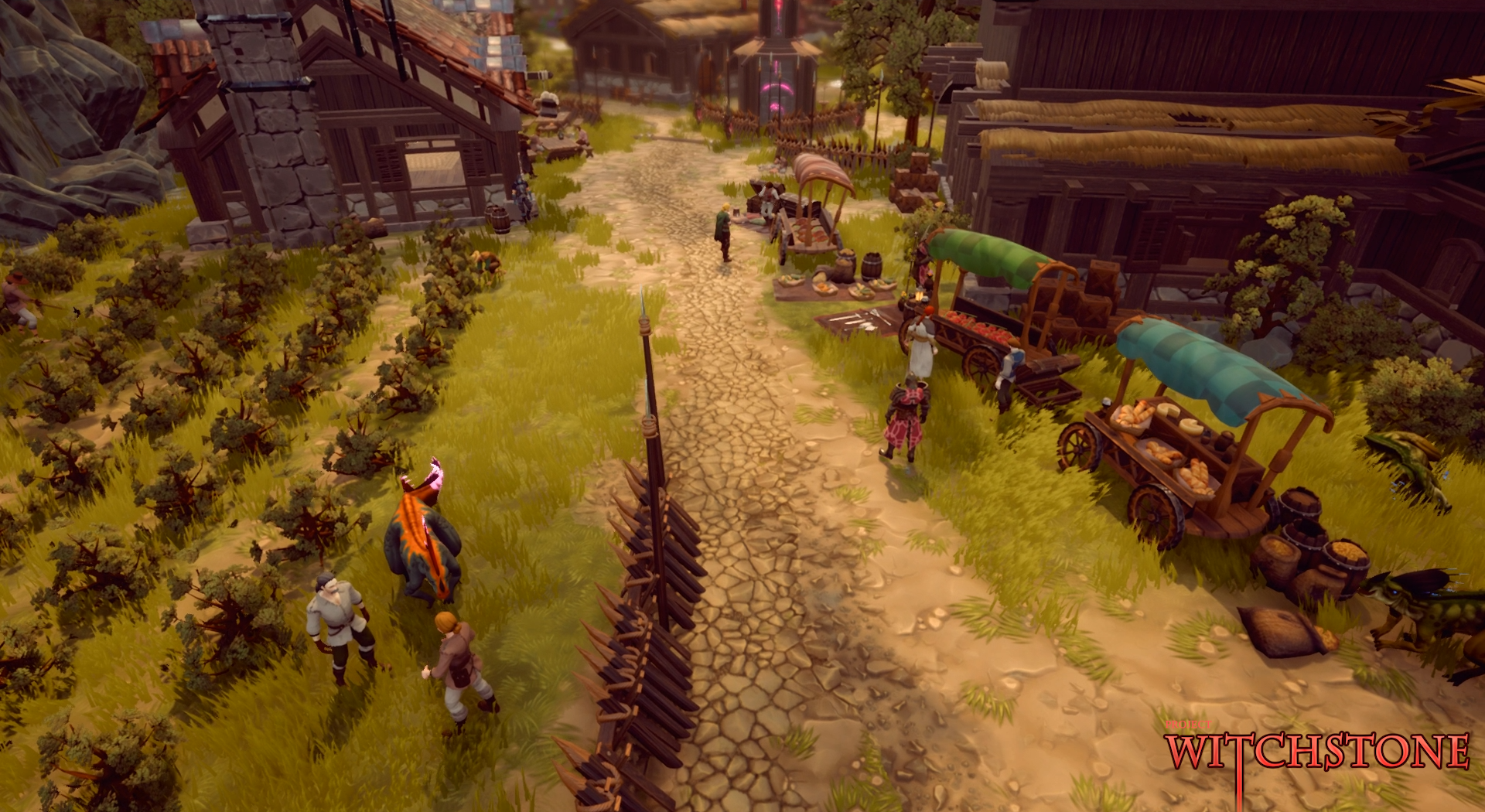 As many D&D players will tell you, half of the fun of tabletop games is that you can play however you want. If you hate getting into conflict, create a character that has better persuasion skills. If you want to specialize in magic, put more points into intelligence and wisdom. I didn’t get a look at the character creator in Project Witchstone, but I was told by the dev team that this is completely possible.

I had played the show floor demo while waiting for my main appointment and got a look at how it feels in motion. Project Witchstone is very much in line with what you’d expect from a CRPG. The interface is very similar to Dungeon Siege (and even refined a bit in the more updated build shown to press) and you move by clicking and holding the left mouse button. Your interactions with characters can see you be diplomatic, completely chaotic, or a mixture of both.

What’s interesting is that the dice roll that these types of games usually calculate in the background is shown on screen here. You get a sense of playing a legitimate tabletop RPG instead of just piggybacking off of D&D logic. When you go to intimidate someone, the game requires you to roll the dice and it adds a little layer of anxiety to the proceedings. It’s pretty interesting to see play out. 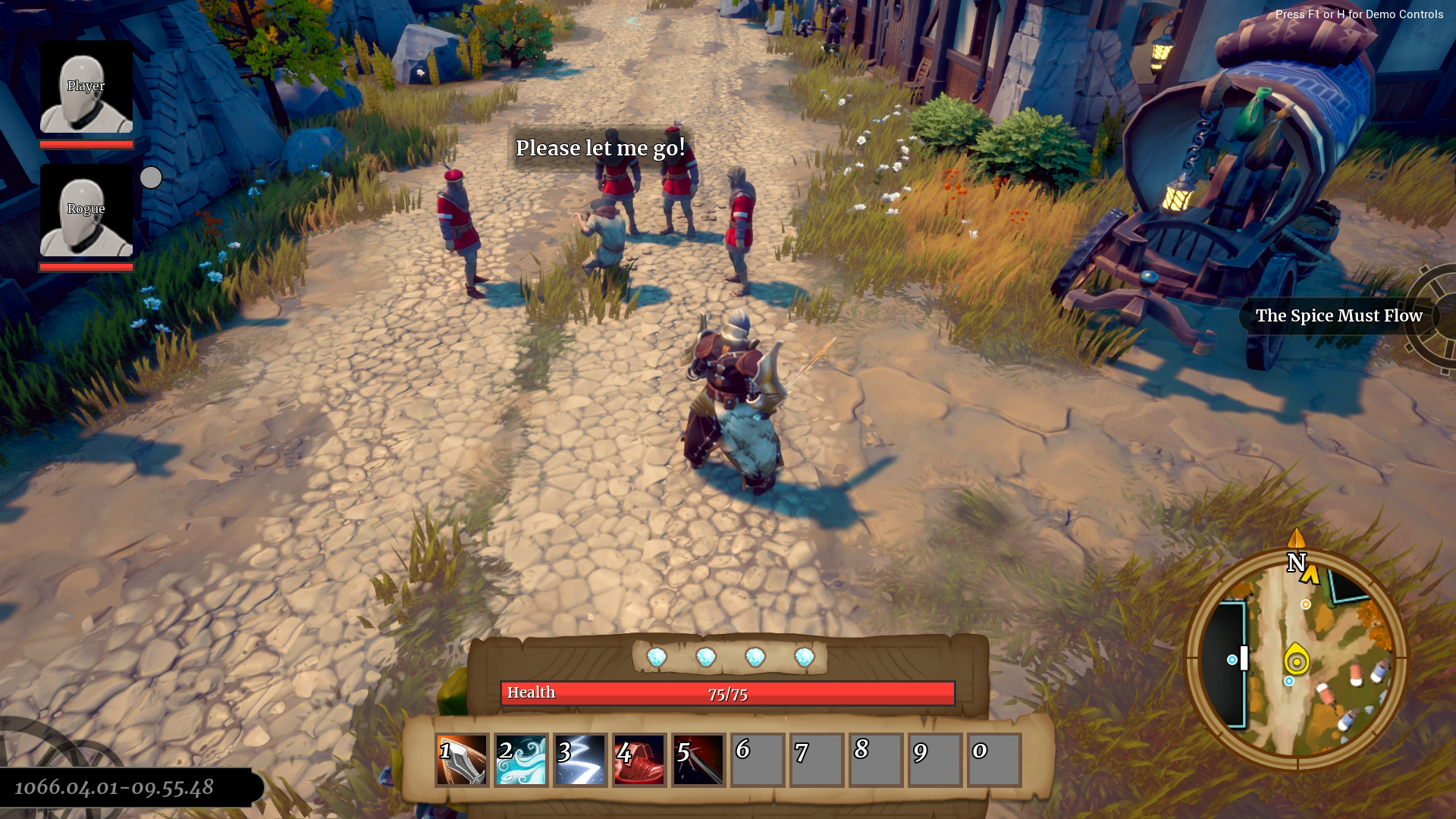 Being a more modern game than the classic Baldur’s Gate, Project Witchstone runs at a smoother pace. Since everything is rendered in 3D, the camera controls allow for greater degrees of freedom and your menu is given room to breathe thanks to higher resolutions. It remains to be seen if the characters will evoke the same kind of drama and tension, but everything about gameplay feel is very refined here.

Some of the more dynamic elements to Project Witchstone weren’t available in the playable build. One thing I was shown was this type of bomb that you can deploy in a town to obliterate everything in sight. The landscape gets darker, buildings crumble, and all of the villagers are killed off. It’s a dramatic answer to solving problems you might cause, but it shows how far Spearhead wants to go with its systems for this RPG.

Whether you’ll never need to nuke a town or not isn’t the quest. The idea that you are living in a real-world governed by real logic makes Project Witchstone very intriguing. CRPGs have always had an extra layer of depth to them over standard RPG titles and it’s great to see someone carrying the torch of the past. This is certainly one to look out for.