Home » Outriders: Every Single Ability For The Technomancer Class, Ranked

Outriders: Every Single Ability For The Technomancer Class, Ranked

The Technomancer is one of the four different classes in Outriders that you can choose from at the beginning of the game. The Technomancer class is more of a long-range type of fighter and a support specialist. The class’s abilities will allow you to spawn a couple of gadgets deadly to the enemies.

This class is one of the best you can use if you’re constantly playing with other players online, or setting up a party with friends. However, that doesn’t mean the Technomancer is a pushover as a solo either. Once you familiarize yourself and master the Technomancer’s abilities, you’ll become a highly powerful player in this game. 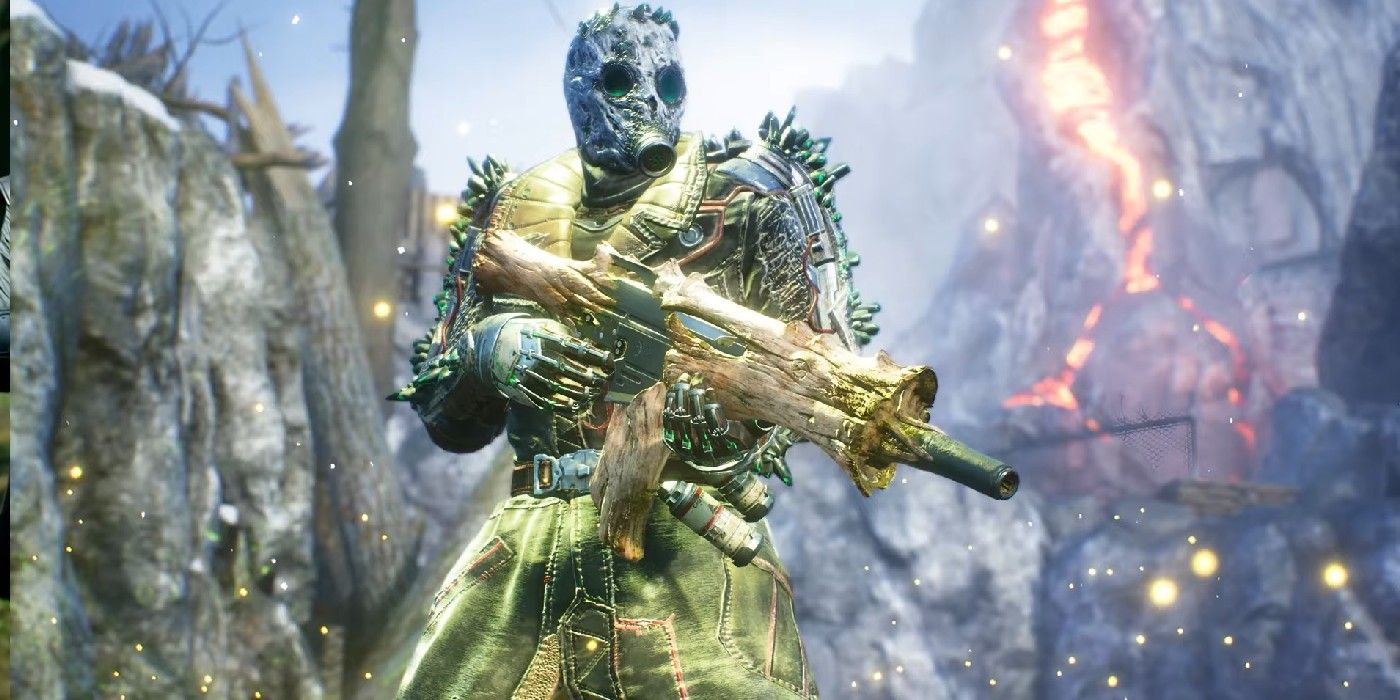 The Fixing Wave ability allows you to use a healing gadget that instantly restores 33% of the health of everyone on your team. If you have turrets deployed, this ability will also restore 50% of their health. It has a cooldown of 24 seconds, but using the Breathe In mod will reduce that by 20%. The ability will unlock once you reach level 13.

You can enhance this ability by using the Cleansing Wind, and Quartermaster Mods. The first one will have the ability remove any negative statuses and make your allies immune for five seconds. The latter mod will replenish one weapon magazine for each ally. 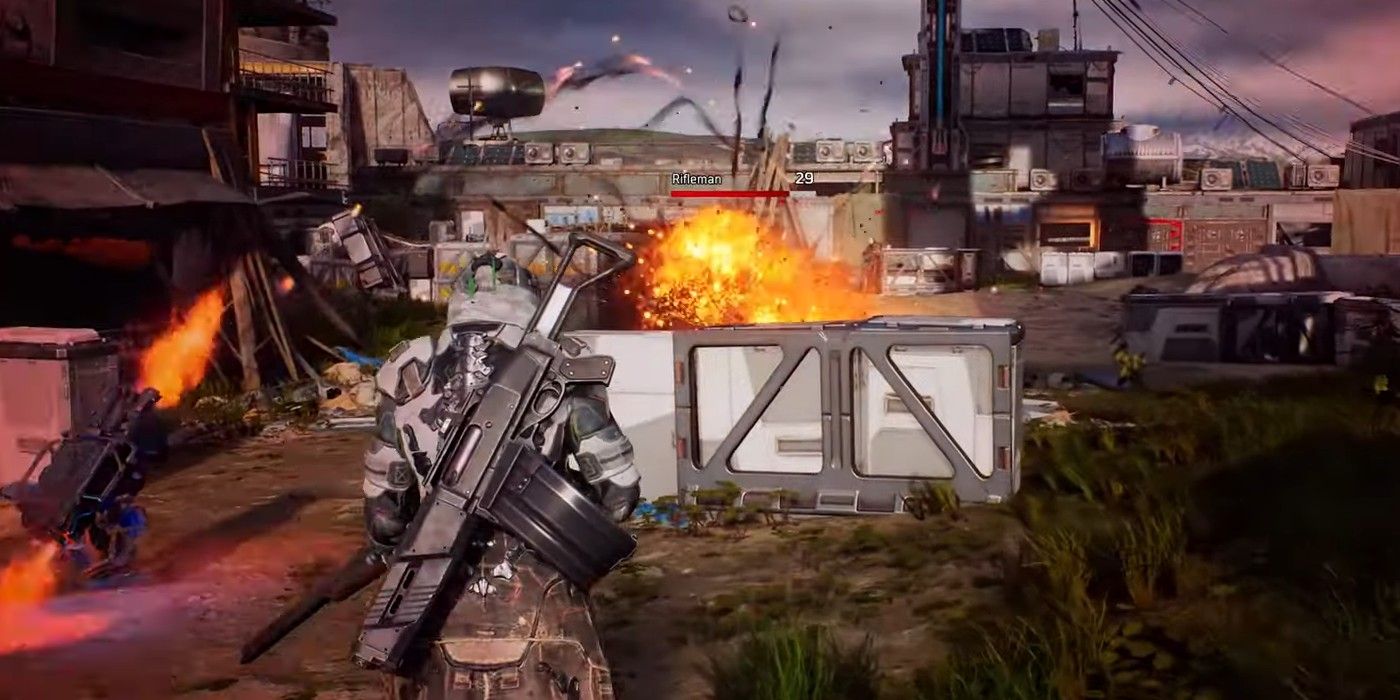 The Cold Snap Gadget ability unlocks when you reach level 17. This ability will deploy a gadget that will inflict Freeze on enemies close to it. The radius for this ability is fairly large as well.

This ability is best used with the Borealis Monarch Armor Set, as it will increase your weapon damage on frozen enemies by 10%. Your critical damage, as well as your party members, will also increase by 90% for 8 seconds whenever you use this ability. 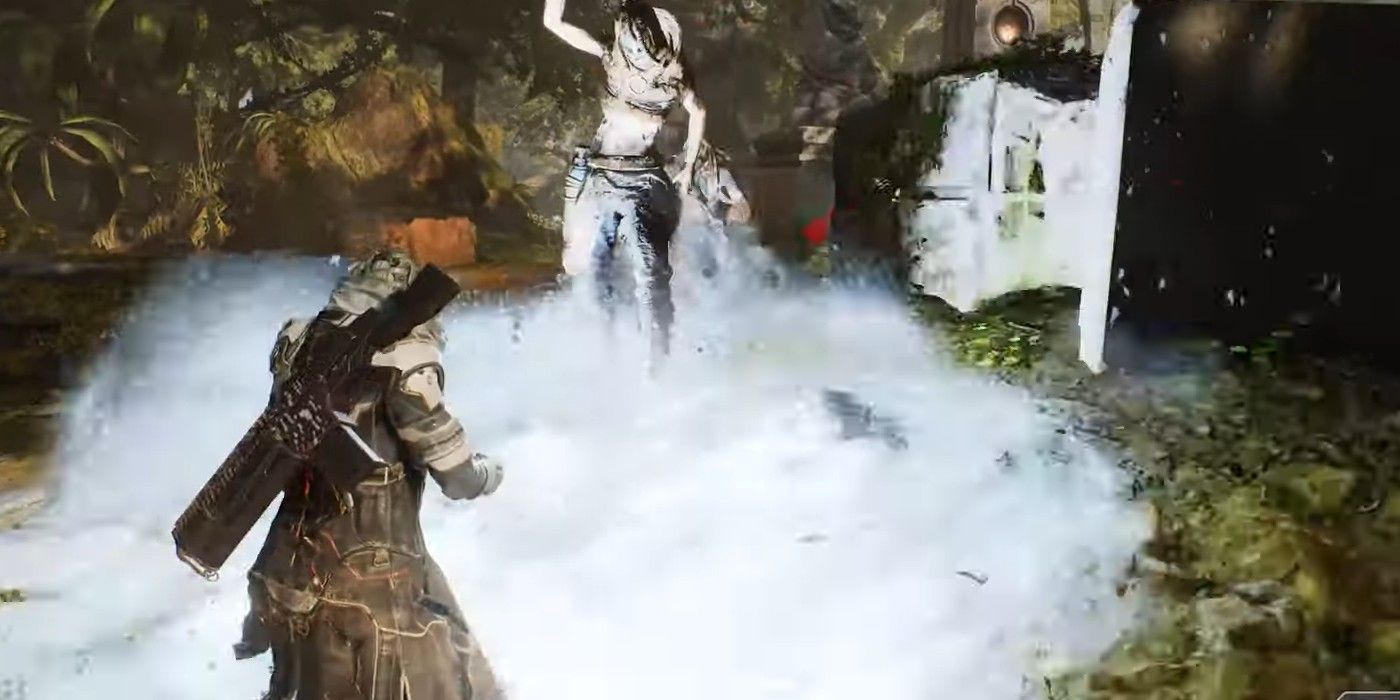 The Scrapnel ability is the first one presented to you when playing as a Technomancer. This ability has a very straightforward function and it is a very decent way of introducing this class to the player. The Scrapnel ability will essentially have you throw a bomb, or a proximity device, to enemies, which damages and interrupts the skills of those caught in the blast.

The More Traps and Supplies mods will increase this ability’s usage by one each before triggering the cooldown. The More Damage mod, on the other hand, will increase its damage. 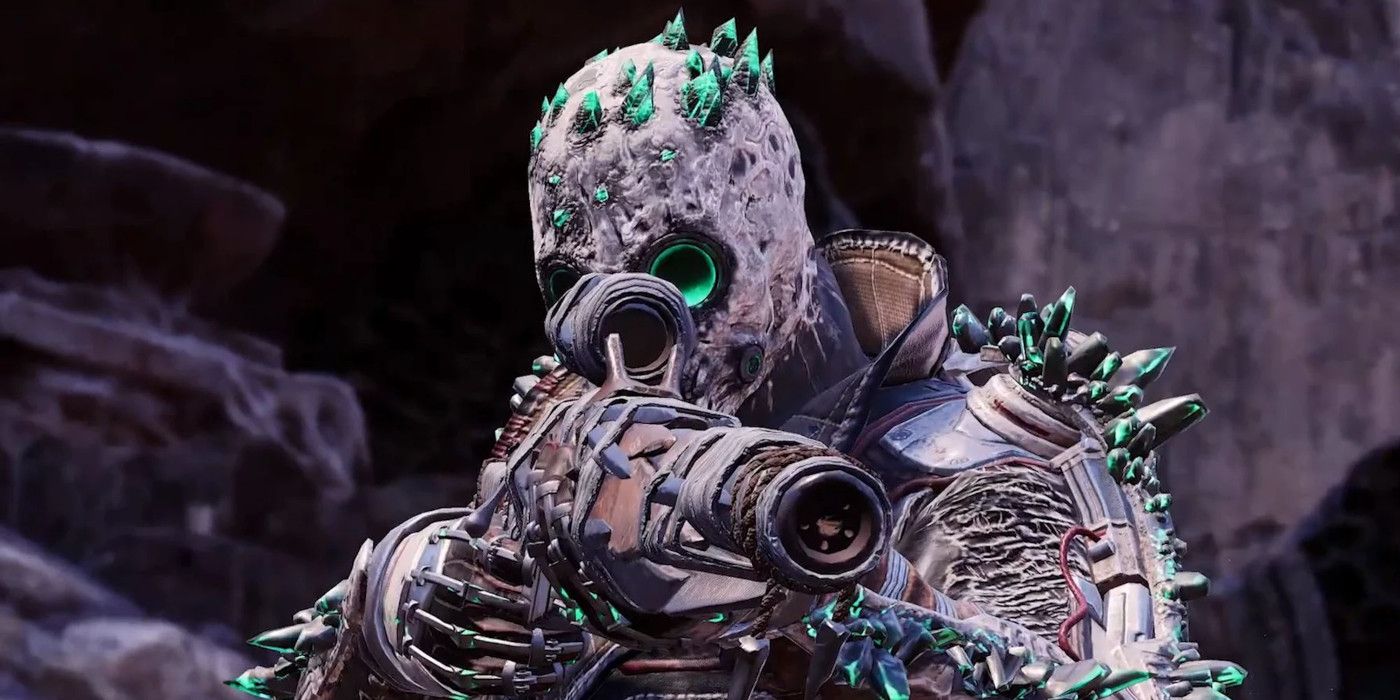 The Pain Launcher ability will unlock once you reach level 4. Activating this ability will summon an Ordinance device, which releases a barrage of missiles to enemies across. Each of these missiles will deal damage and also interrupt an enemy’s skill.

If you want to improve this ability even more, you can wield the Advanced Rockets mod. This will make every rocket from the ability deal more damage. There’s also the Cannonade, which increases the number of rockets by 10. 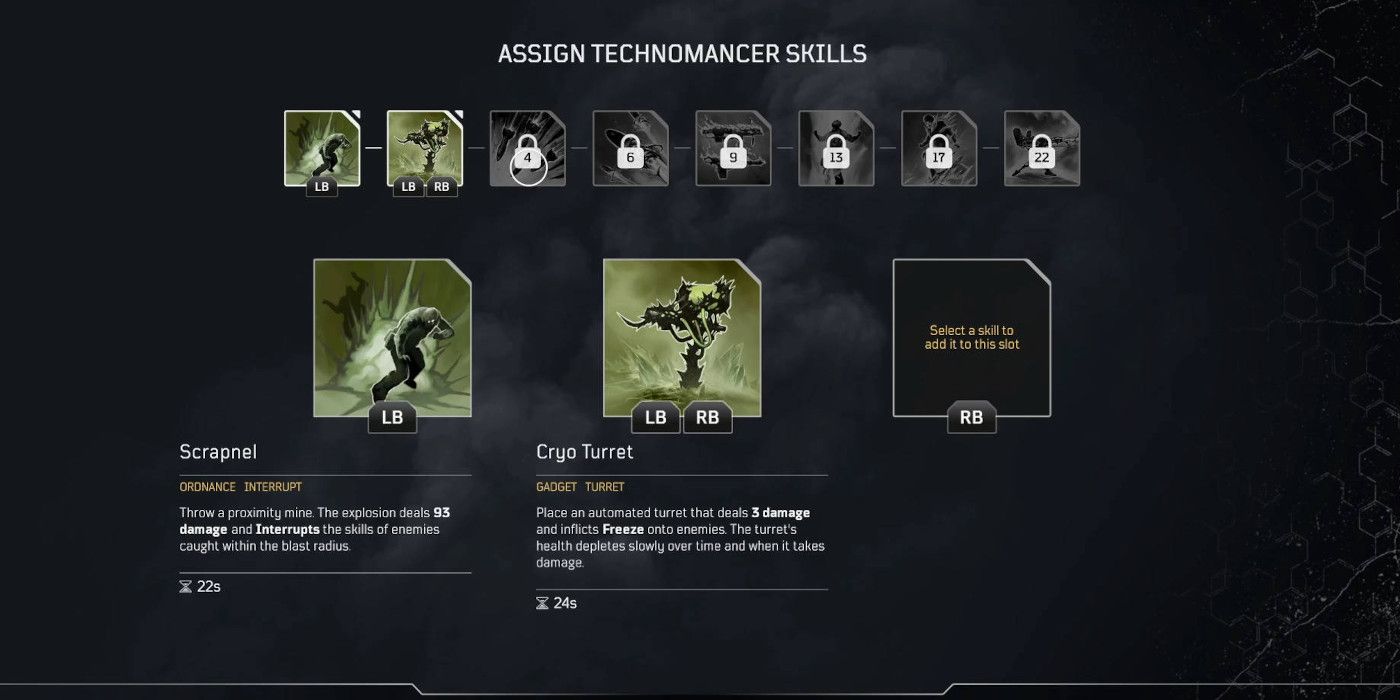 The Cryo Turret is the Technomancer ability you’ll gain when you reach level 3. This ability will summon an automated turret, which will then deal damage and inflict freeze on targeted enemies. This turret will slowly deplete its health and it will also receive damage from enemies, but abilities such as Fixing Wave will help make it last longer. This ability has a 24-second cooldown.

This kind of ability is very helpful, especially during the end-game content where you’ll need to go to places with waves upon waves of enemies. Make sure you check out mods such as Bonus Duration, Increase Damage, and Surprise to make this ability even more efficient. 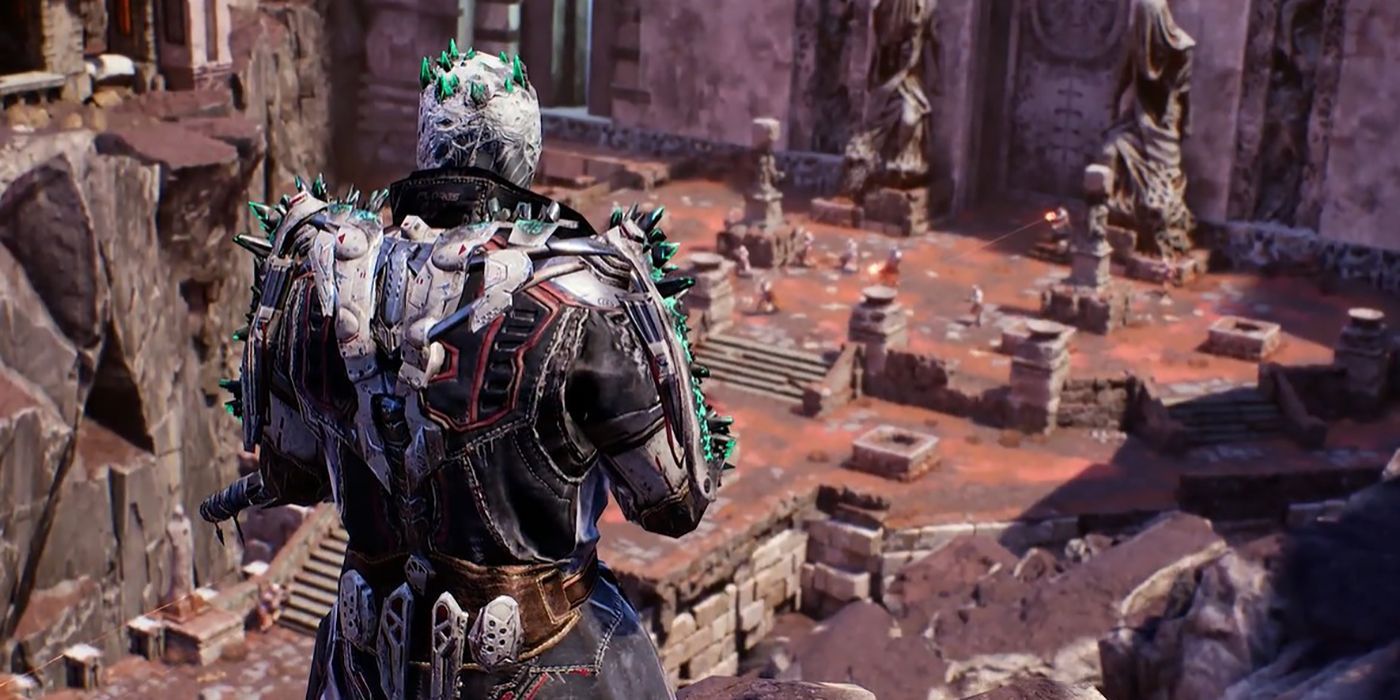 The Tool of Destruction ability unlocks once you reach level 9. This ability will essentially give you two choices within one single ability. You can either summon a rocket launcher, which deals a ton of damage and also interrupts skills, or you can summon a minigun. Either way, the skill will end when you run out of ammo or swap weapons.

There are a couple of mods that you can pair this ability with to make it even more powerful. For example, the Bang for your Buck mod will grant a 100% base ammo increase for the weapon. The Demolition Man mod will increase the rocket’s damage. The Rocket Man mod will give you three more rockets to use. 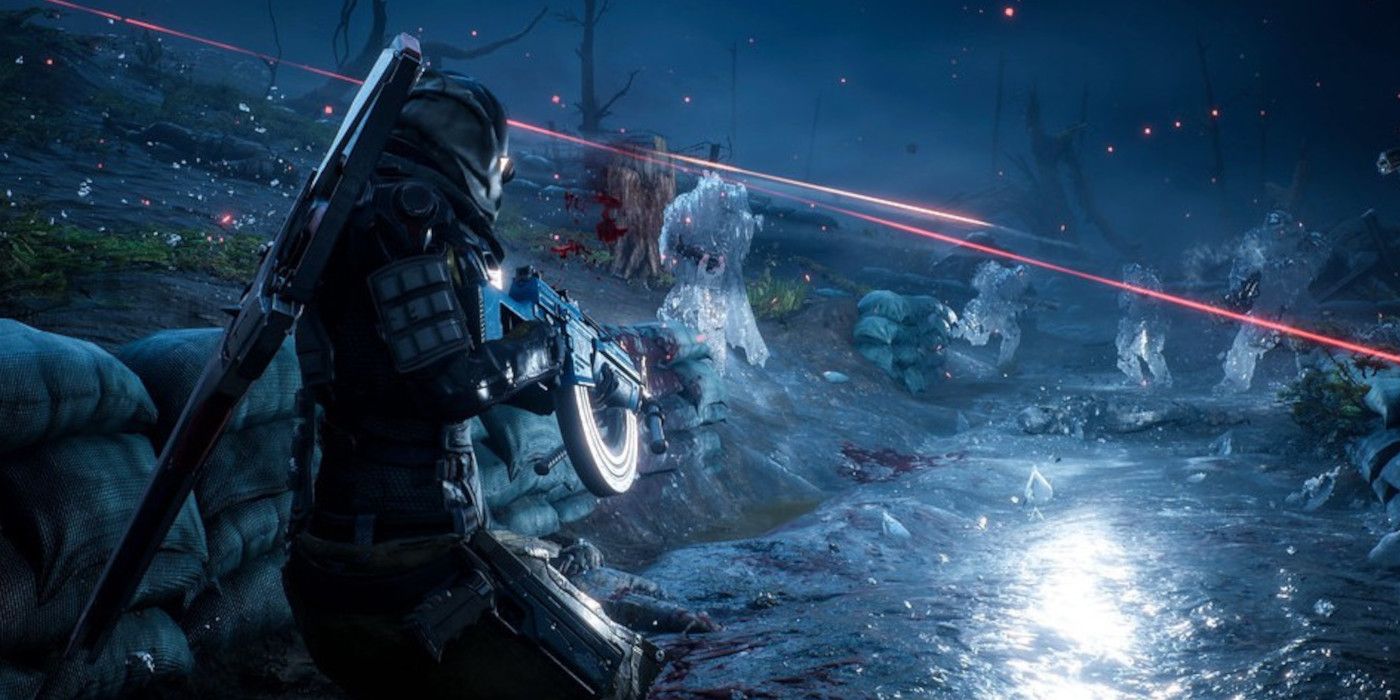 The Blighted Rounds ability will unlock once you reach level 6. Activating this ability will coat the bullets of your current weapon with decay, causing them to inflict toxic onto enemies. This effect will also affect those who are near the main target. The ability will last until you reload or switch weapons.

Pairing this with the Critical Analysis mod will add critical damage to this ability by 15%. The Spare Mag will also allow you to use the ability for one more reload. 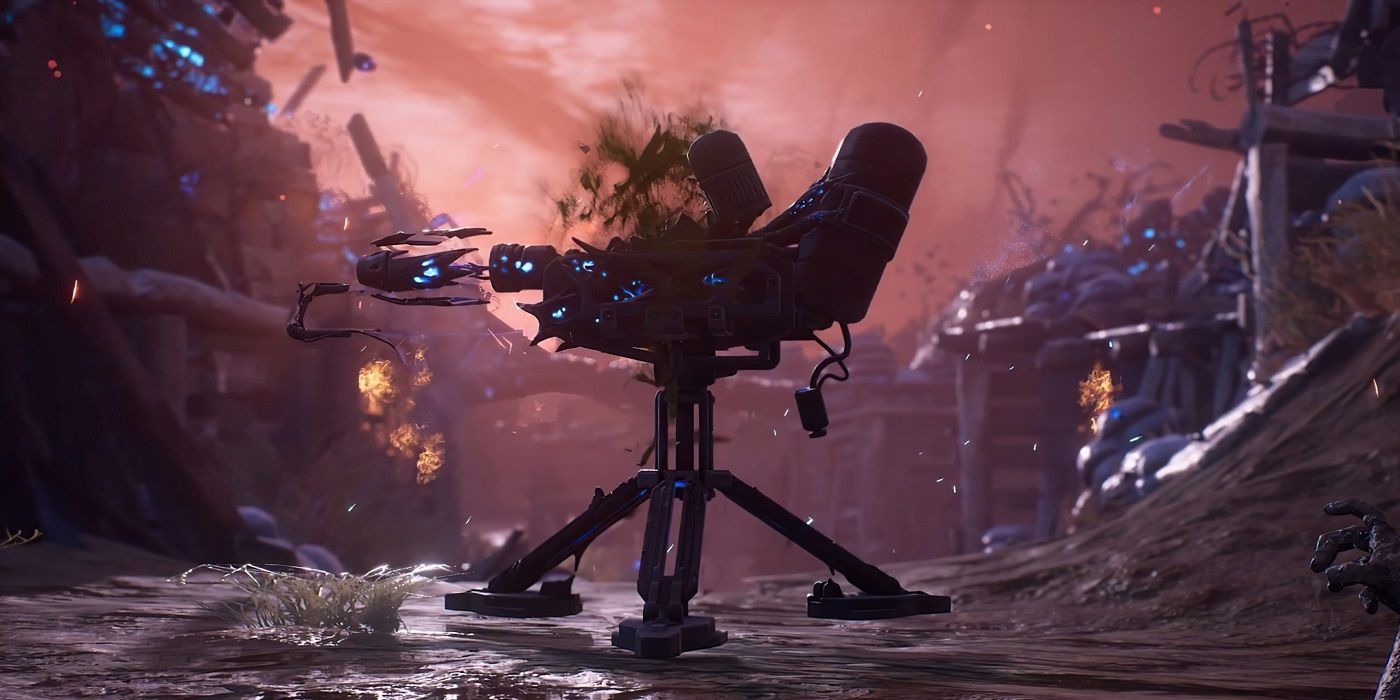 The Blighted Turrets ability is the last one to unlock for the Technomancer class, at level 22. This ability will allow you to summon an automated turret that deals damage and inflicts Toxic onto enemies. This essentially works the same ways as the Blighted Rounds ability, but with an automated turret instead of your main weapon.

The turret spawned’s health will deplete over time and it will also take damage from enemies. You can use the Fixing Wave ability to heal the turret.

NEXT: The 10 Best Side Quests In Outriders 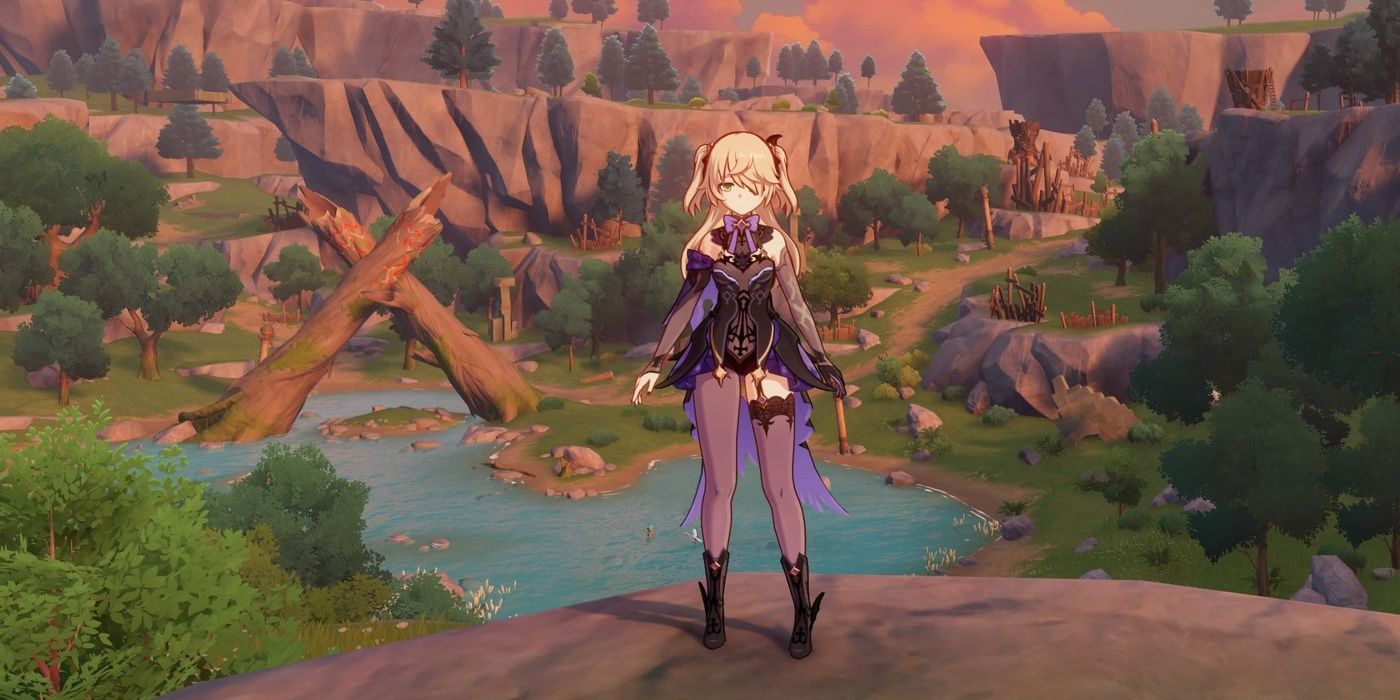 Rhett Roxl is a freelance content writer and an avid video gamer. When he’s not writing, or playing video games, or writing about video games, he makes and plays music at local bars.