Home » New Pokemon Snap: 10 Memes That WIll Leave You Crying Of Laughter

New Pokemon Snap: 10 Memes That WIll Leave You Crying Of Laughter

Players have been thrilled to start playing the New Pokemon Snap game from Nintendo, which allows them to take pictures of their favourite pokemon in the wild. The player can toss food for them to eat, or creep up quietly in the hopes of catching a pokemon unaware. Gaming fans everywhere have been impressed by its gorgeous graphics.

Gamers have lots of time to spare online, so the internet is full-to-bursting with memes teasing the new game, old games, and more. It doesn’t hurt that Pokemon fans have been waiting for another Pokemon Snap installment since the first one came out in 1999. These memes are among the best to be found as players react to this new game.

10 Meanwhile, For Other Consoles… 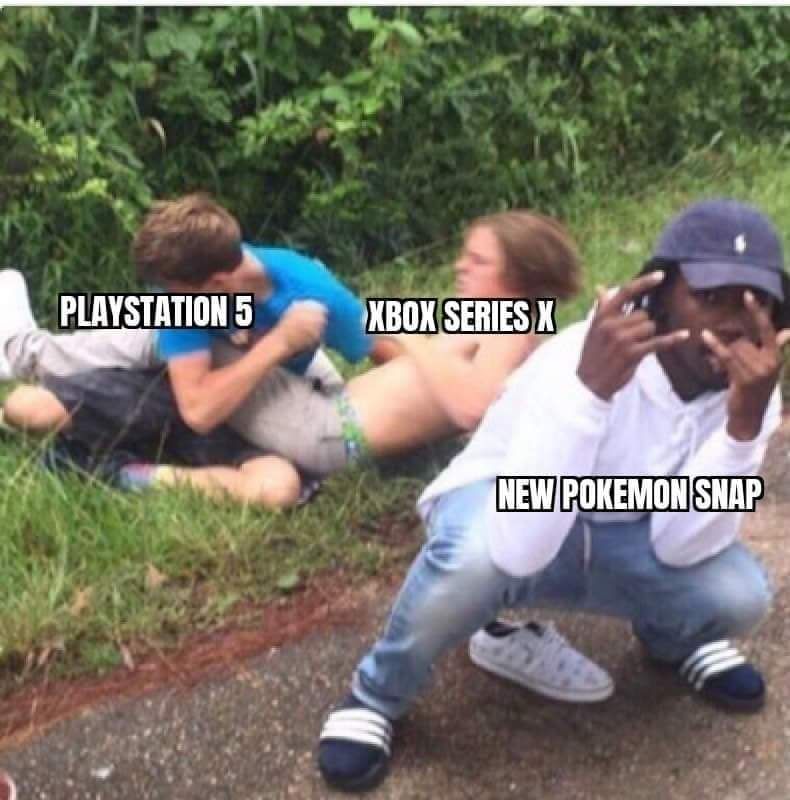 Nintendo has mostly sidestepped the latest console war since the Nintendo Switch released years prior to the Xbox Series X and PlayStation 5. While fans battle out their preferences in the background, soothing games on the Nintendo are a refreshing change.

Even The Legend Of Zelda: Breath of the Wild, an action-adventure game, manages to be peaceful and cathartic at times. New Pokemon Snap is much more interested in catching the drama on camera than being a part of it. 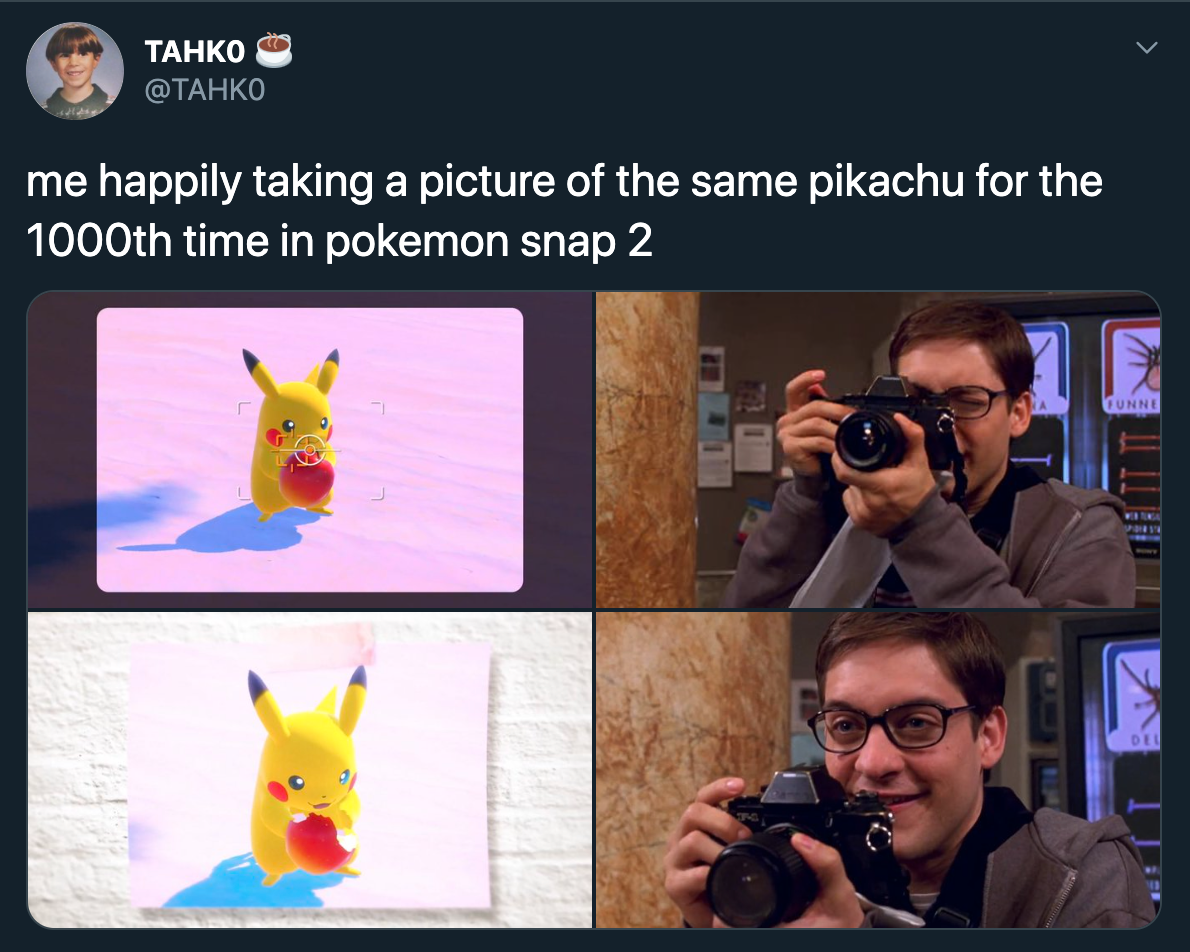 Many players can relate to the sentiment of being happily content with taking pictures of their personal favourite pokemon (no matter how many times they do it). Peter Parker (aka Spider-Man), portrayed here by Toby Maguire, is the nerdy photographer for his school paper.

Undoubtedly, this Peter Parker would have adored Pokemon Snap. Pairing him with Pikachu is a match made in heaven since both are fan-favourites among a set of loveable other options.

This fan seems to have spotted a missed opportunity on Nintendo’s part. The Nintendo “Labo” is the company’s creative cardboard workshop toy, which was heavily criticized for being glammed-up cardboard boxes.

One of the sets of Labo comes with a cardboard camera, used to take snapshots in the game! It seems obvious to use it with New Pokemon Snap, no? Apparently not to Nintendo, though, since there’s no indication the two ideas will merge (at the time of this writing). 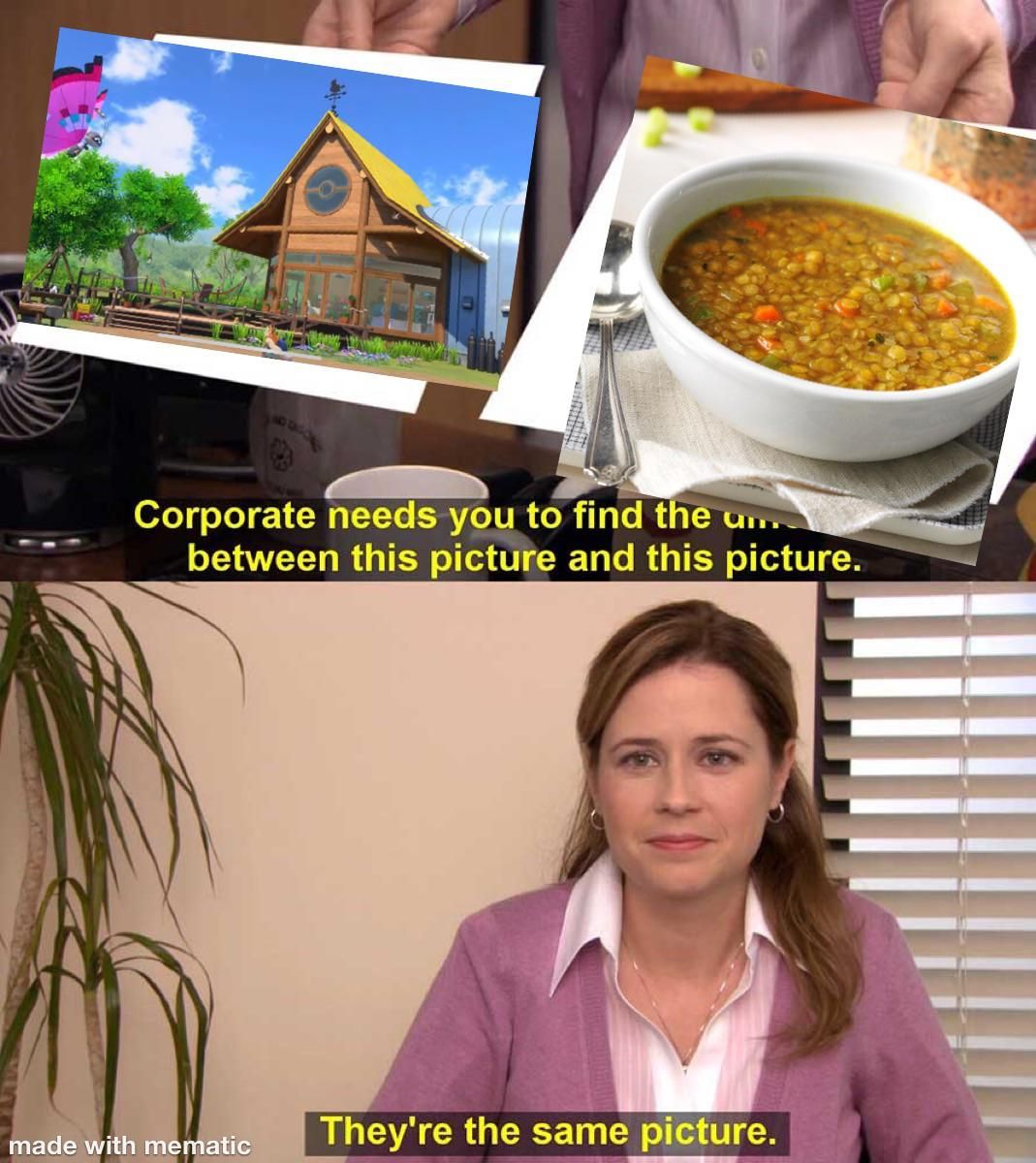 The New Pokemon Snap game takes place in a never-before-seen area called the Lental Region. Though it’s spelled differently, it’s pronounced exactly like the common legume food, lentils, that we know and love. Did they not see this coming?

Many fans looked at each other with bewilderment upon first hearing the name in the trailer, and though some have grown used to it, others will never let the Pokemon franchise live it down. The internet is full of these shenanigans. 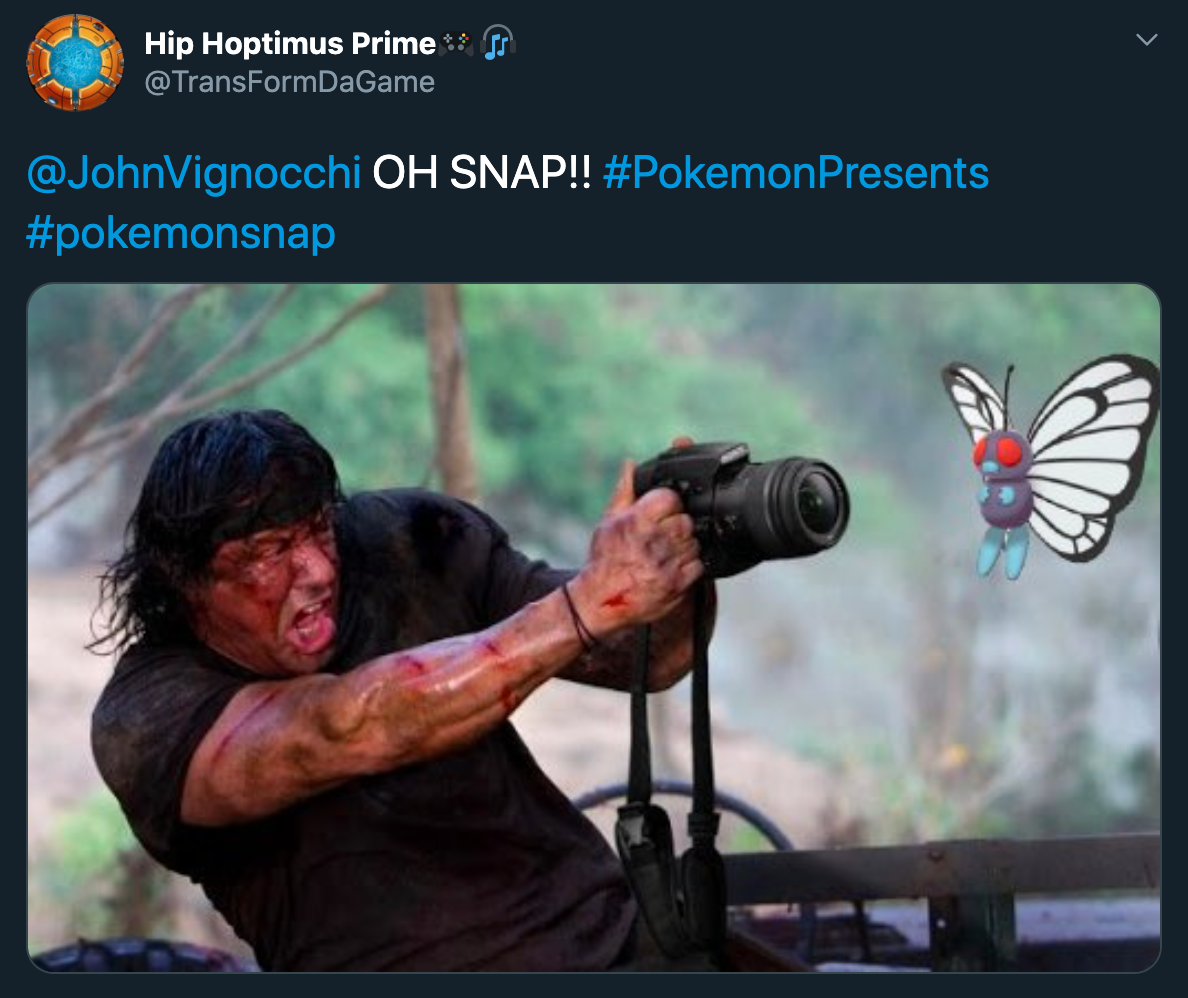 However tough Rambo might seem on the outside, we know he has a soft heart that’s just aching to get out and take some photos of Butterfree. Memes of this variety, where a camera and a pokemon are added to a famous shot from a movie, are commonplace online.

Fans get a good chuckle portraying the intensity they feel taking pictures by using these celebrity images, or even imagining their favourite characters trying to ammuse themselves by snapping picutres. 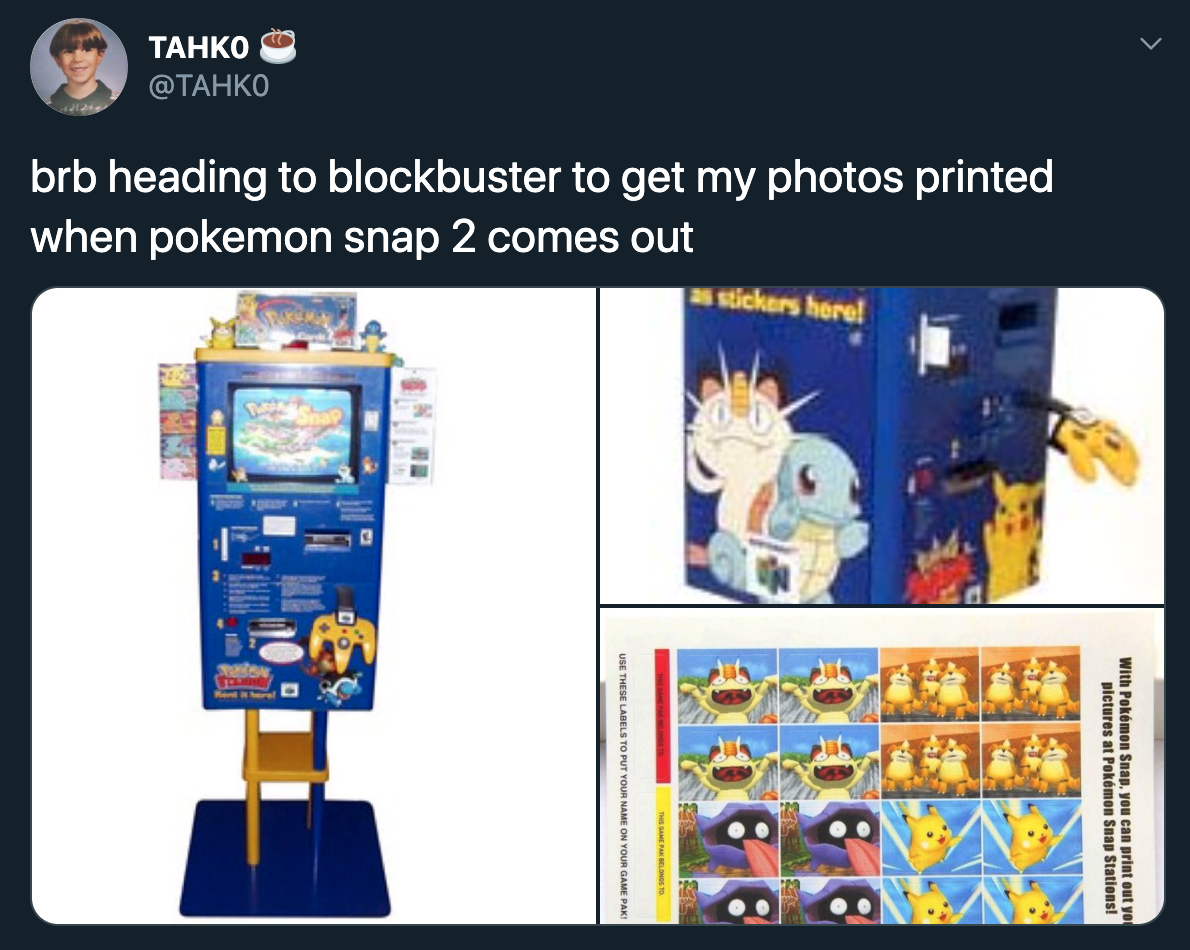 For Pokemon fans that have been looking forward to this release since the first Pokemon Snap game, it’s been a welcome chance to look back on their past! Blockbusters may not be around anymore, but nostalgia fills the brain just looking at this old Blockbuster photo machine, which players could use to print their snaps from the game in real life.

Unfortunately, no such beautiful device will be appearing in local stores this time around. The silver lining is that printing photos is a lot easier these days. 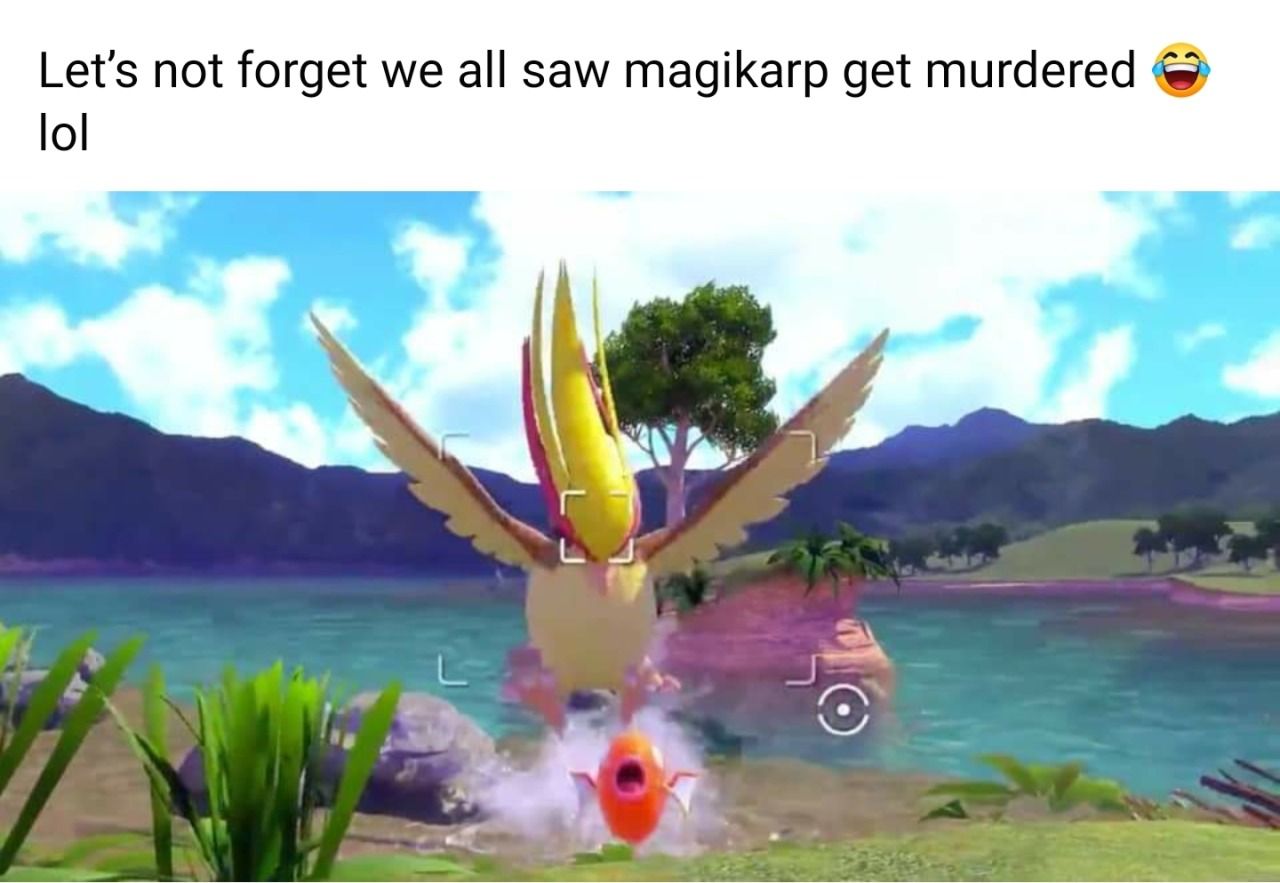 When The Gamer spoke to nature photographers about New Pokemon Snap, they indicated that catching animals doing ‘interesting behaviors’ on camera was key. This fan shot from the game is undoubtedly an “interesting” behavior!

The lore around Pokemon has always led to some spooky, disturbing conclusions – especially as the fans have aged and thought more deeply about things like Ghost-type Pokemon. New Pokemon Snap allows players to catch these slightly disturbing images on camera for all to see. 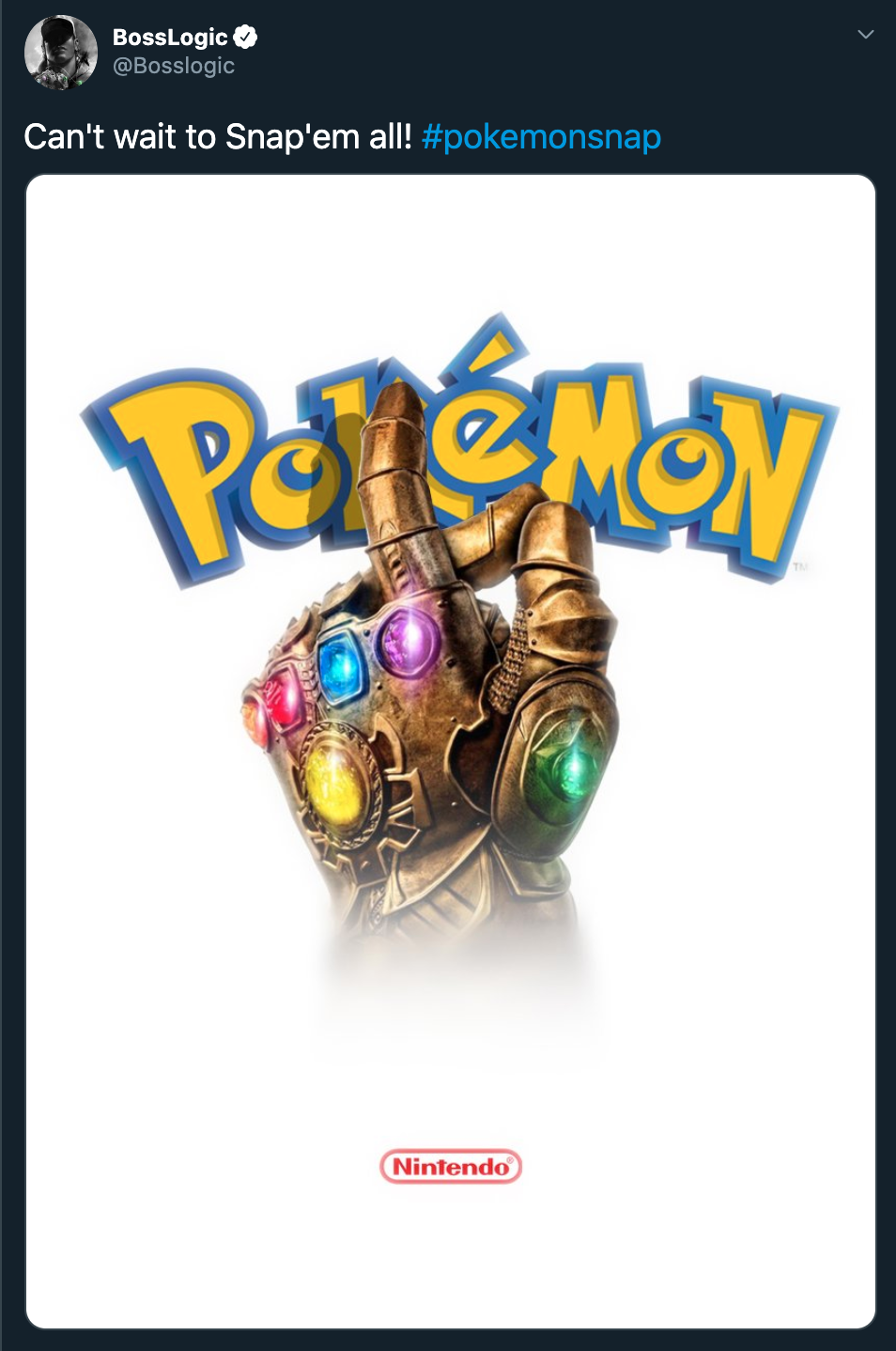 New Pokemon Snap’s announcement came a little late to correlate perfectly with the other relevant ‘snap’ of the past few years, Thanos’ appearance in Marvel, but that didn’t stop fans from making the joke anyway. After all, most people have lost a sense of time during the pandemic anyways.

We can only imagine what might happen if the rolls were reversed… giving Thanos a camera to snap pictures of his friends, and giving a Pokemon Trainer the Infinity Gauntlet to kill half the Pokemon population. 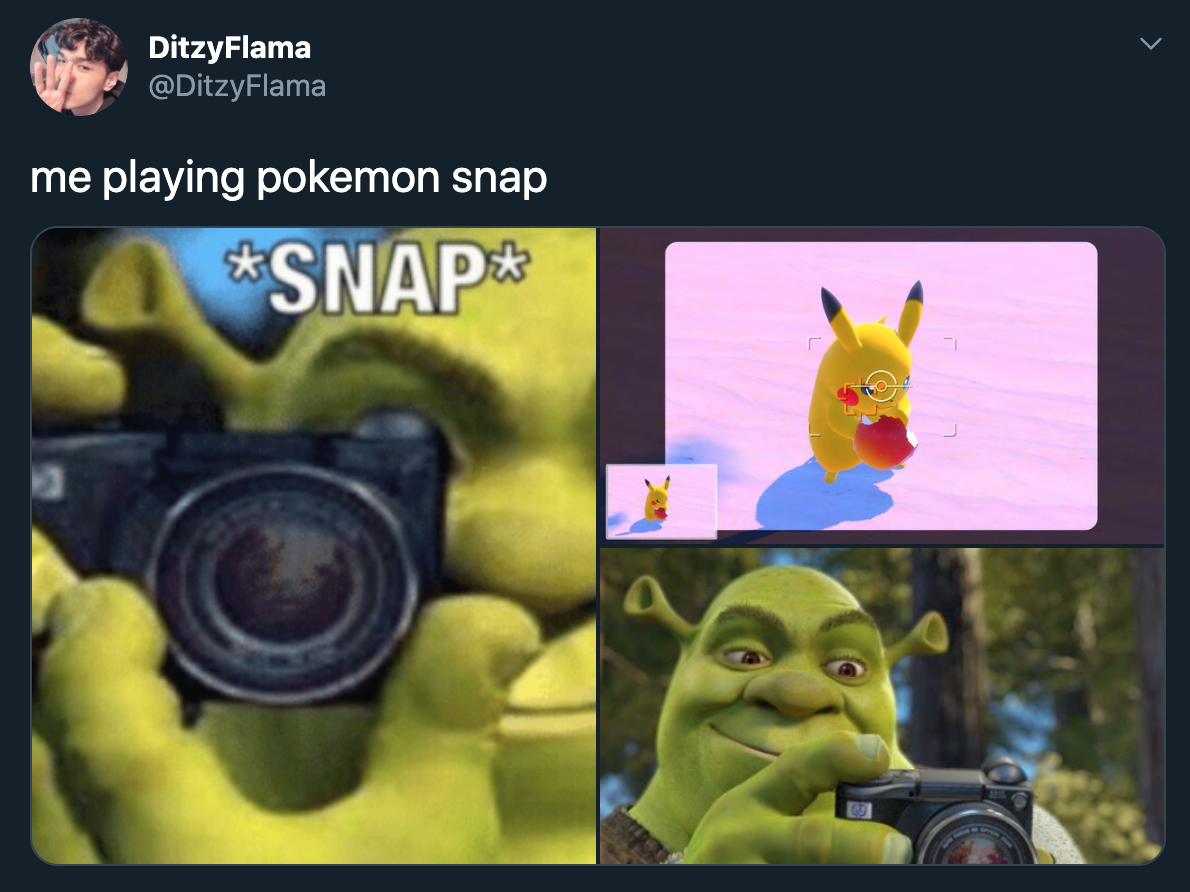 What do people love? Pokemon. What else do people love? Shrek, obviously. Put ’em together and whaddya got? A recipe for success! This wholesome meme is surprisingly – almost disturbingly – well photoshopped, with images of Shrek holding a camera and admiring his adorable Pikachu pal.

Who knows what could have possibly prompted a fan to concoct this cross-over, but we’re glad it exists. One can only wonder whether Shrek prefers swamp-dwelling pokemon, like Wooper or Politoad. 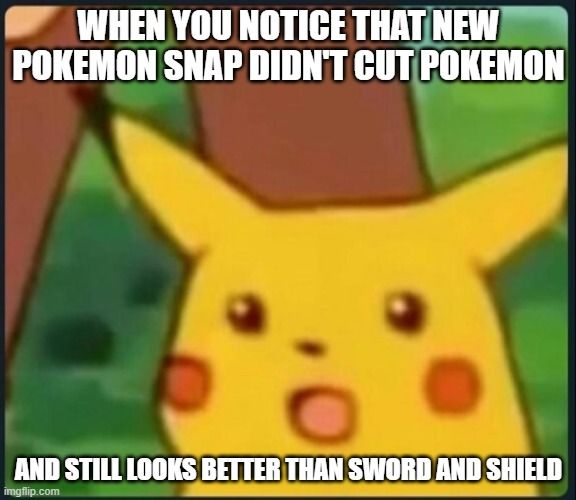 Fans heavily criticized the recent Pokemon main-line games, Sword and Shield, for their utterly subpar graphics. While the games still made money, their existence earned a collective moan from the fans.

NEXT: 10 Fishing Games Ranked By The Biggest Fish You Can Catch 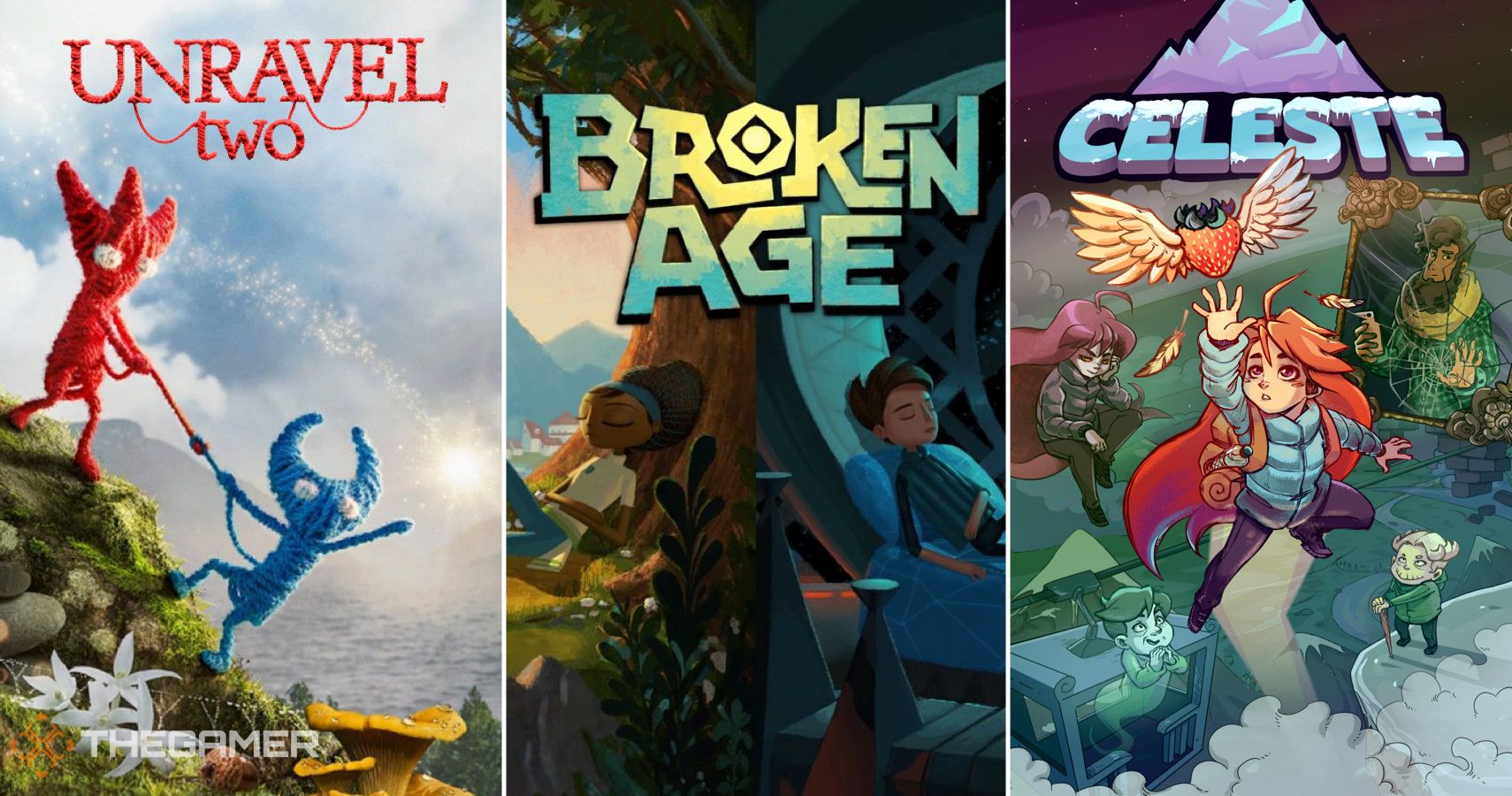 Gabrielle “Belle” Huston is a writer and long-time gamer based in Ottawa, Canada. She’s played video games for at least as long as she could write, and vice versa, which has led her to work for nerddom sites like The Gamer and the International Geek Girl Pen Pal Club. As a current undergraduate student of journalism, she’s seldom away from her computer. Belle uses what little free time she has to play Battlefront 2 with her partner, work toward that 5-star rating in Animal Crossing, and wonder when the new Dragon Age installment is coming out.