Neon White's seventh mission adds a few new demons to the fold. The way you approach these levels will be largely affected by these new demon types, of course, but it goes beyond that. You see, when it comes to pursuing presents, some of these demons are actually oddly helpful. As an example, the mimic demons, which look like treasure chests that have been corrupted, can be jumped on and used as platforms.

The truth is, while many of these gifts are pretty deviously hidden, some of them are pretty fun to acquire. The biggest issue is knowing where they are and what tools you need to get to them. This guide will help remove the frustrating part and help you get to the fun platforming part as quickly as possible! 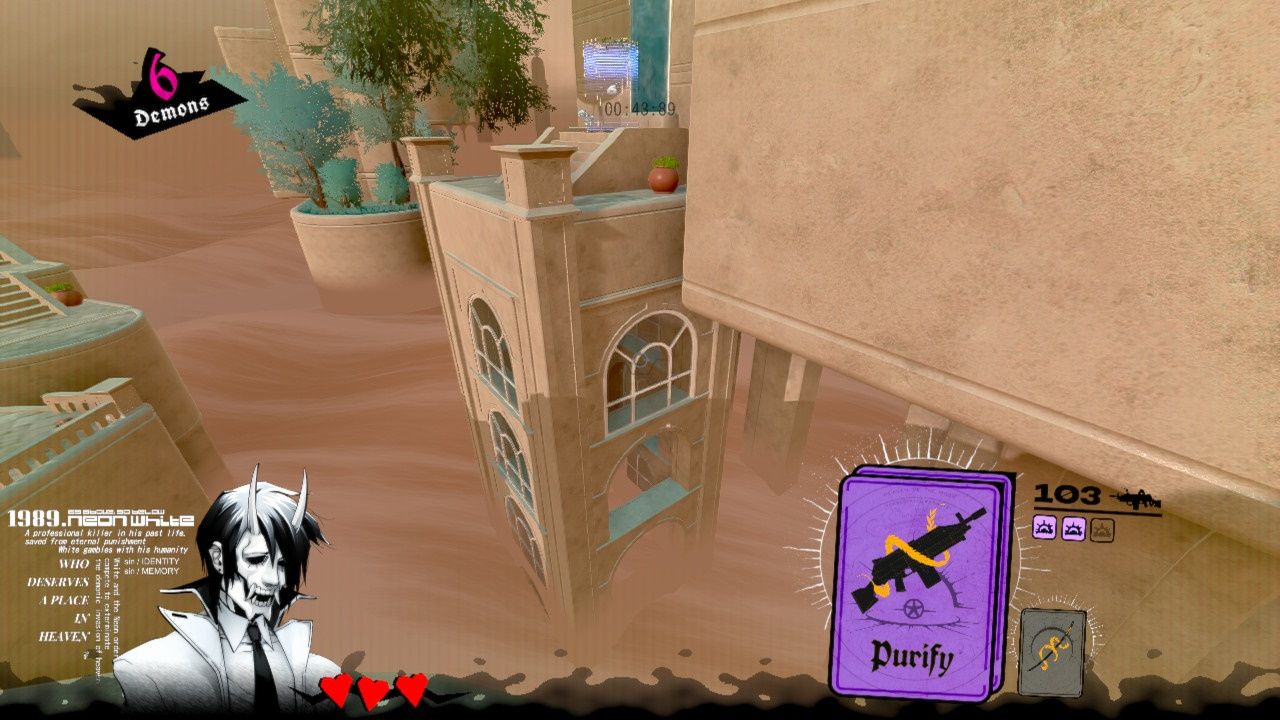 This present can be obtained at multiple points in the stage, as it is in a room just below the stage's exit. You simply need to have an assault rifle or a handgun card so that you can hop up to it. 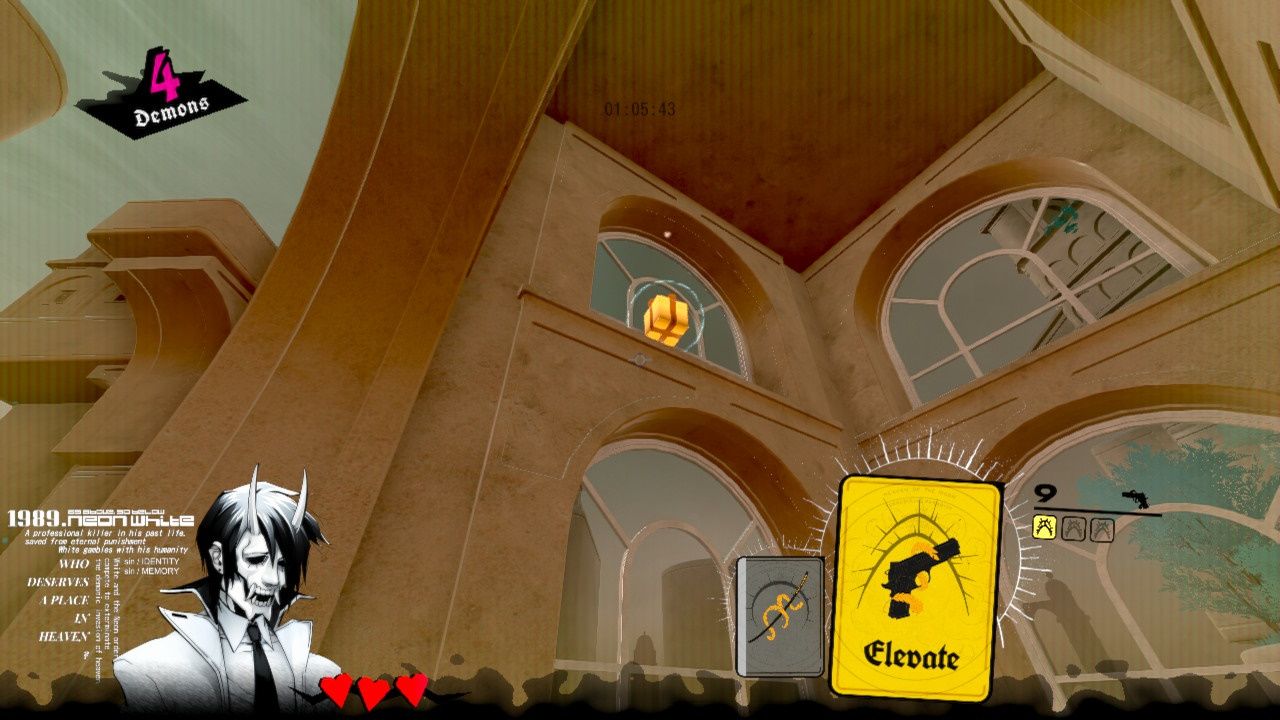 One of the best times to grab the gift is when you reach the section that has the two ammo resupply demons in a bubble. You need to perform a bomb jump to hop up to the next level, so you are provided with an assault rifle just before you reach this area. Instead of doing that, take a left and turn towards the level's exit instead, hop down onto the windowsill, and perform a bomb jump to grab the Cigars. 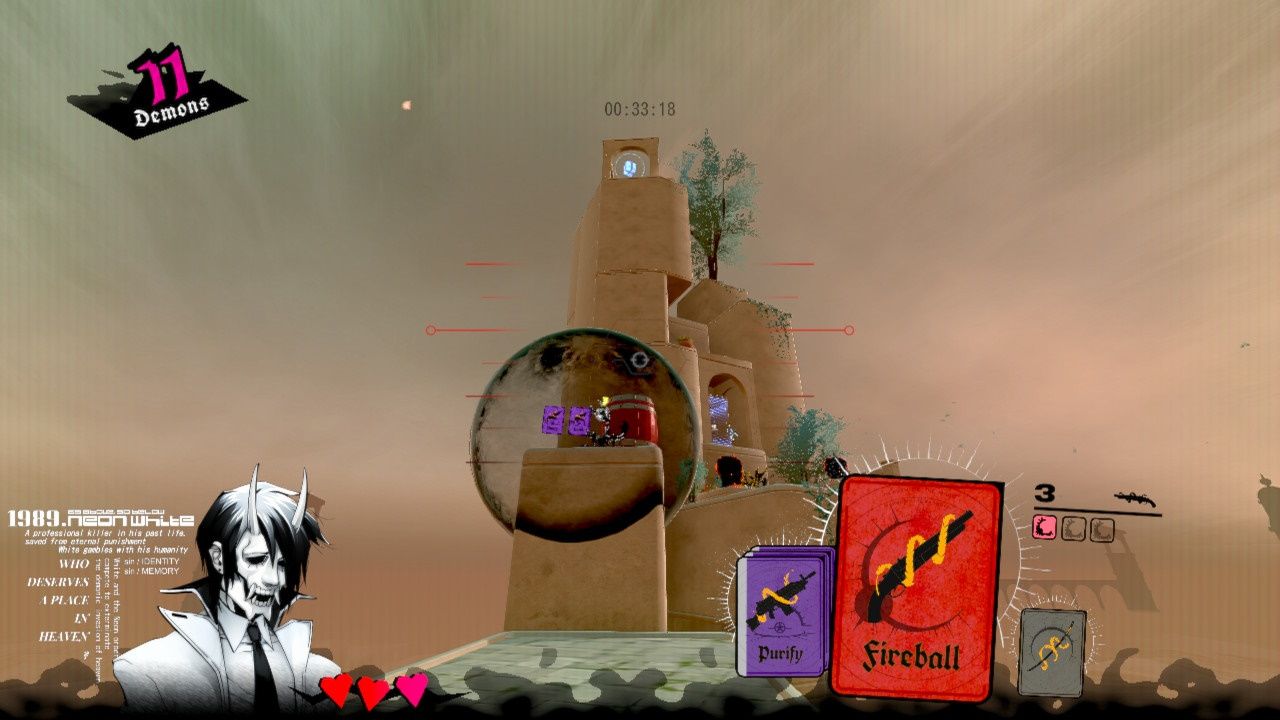 This gift looms over the level's exit. You will need to platform your way up a number of structures in order to get to it. The best way to do this is to just hold onto all of your assault rifle cards. Remember, if you are chasing after the gift, you don't need to take out all the demons. 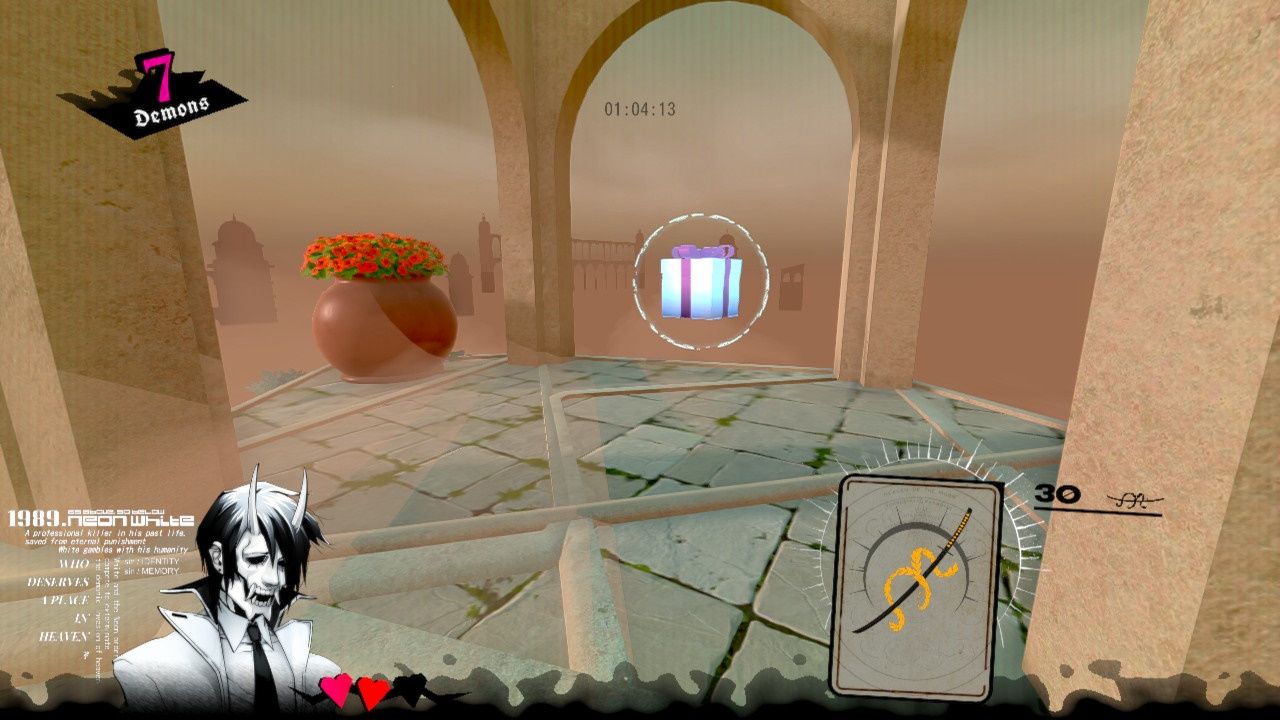 If you play your cards right, you should have three assault rifles when you reach the final area with the exploding barrels. Perform a bomb jump with the final exploding barrel to get some height and use the shotgun to dash to the structure above the stage's exit. From there, just bomb jump your way to the top. You will now be able to grab the Lucky Cat Statue. 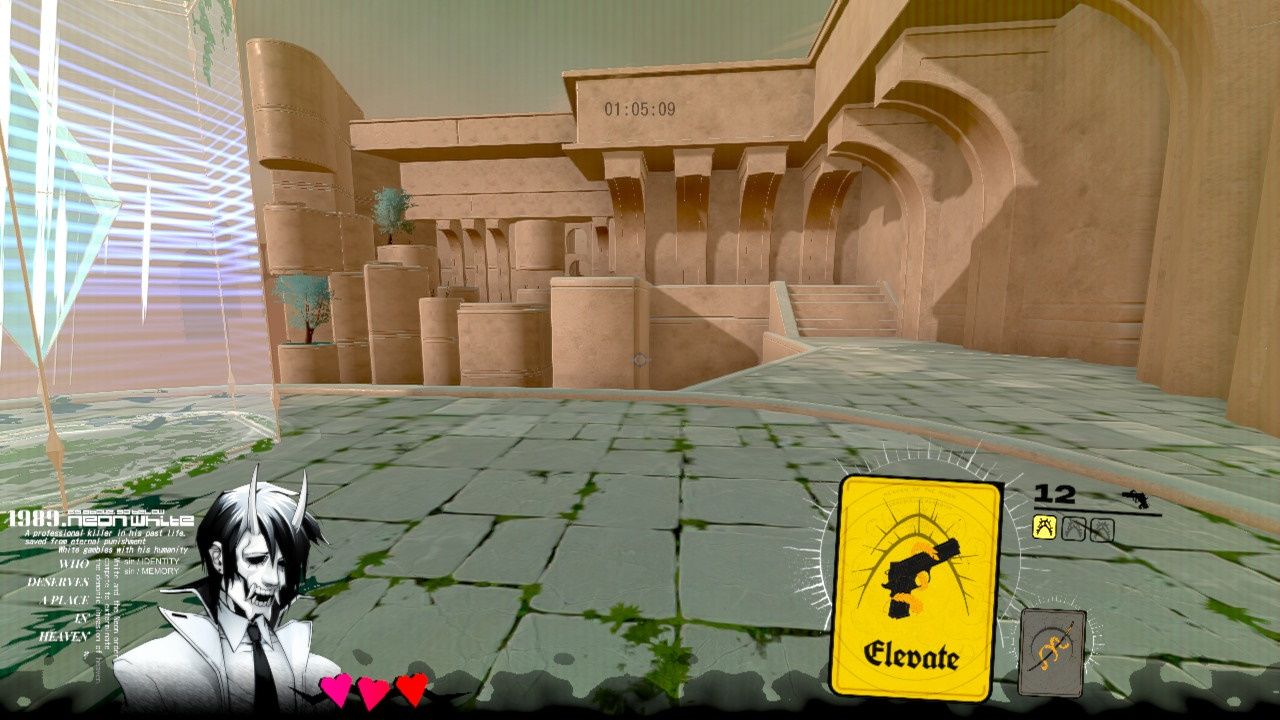 Complete the stage as you normally would, except when you see the handgun vending machine make sure to grab the spare pistol. Now, once you are at the very end of the stage you will slam down on a group of enemies and be propelled toward the stage's exit. Land beside the exit. At this point, you should have a handgun and sniper rifle card. 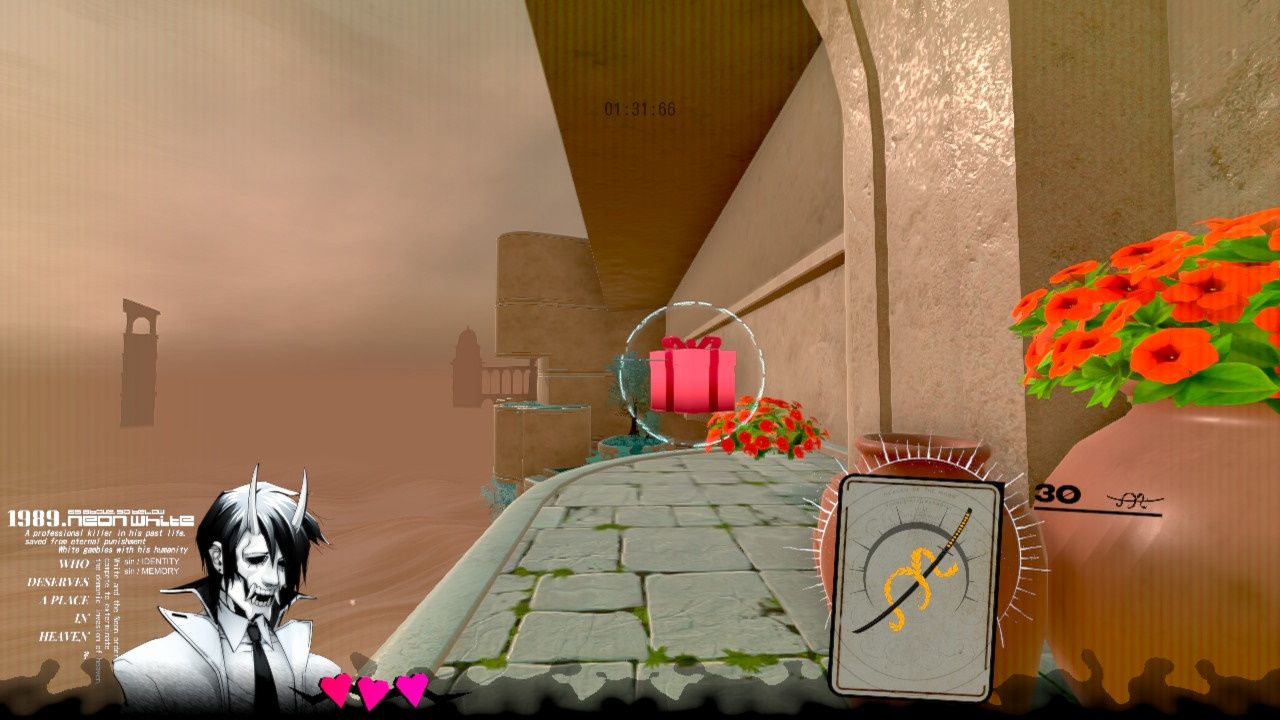 Make your way along the platform away from the exit. You should hook around a wall and see the present. Using your discards you will easily be able to climb your way up to the present. You will now take hold of the bottle of Perfume. 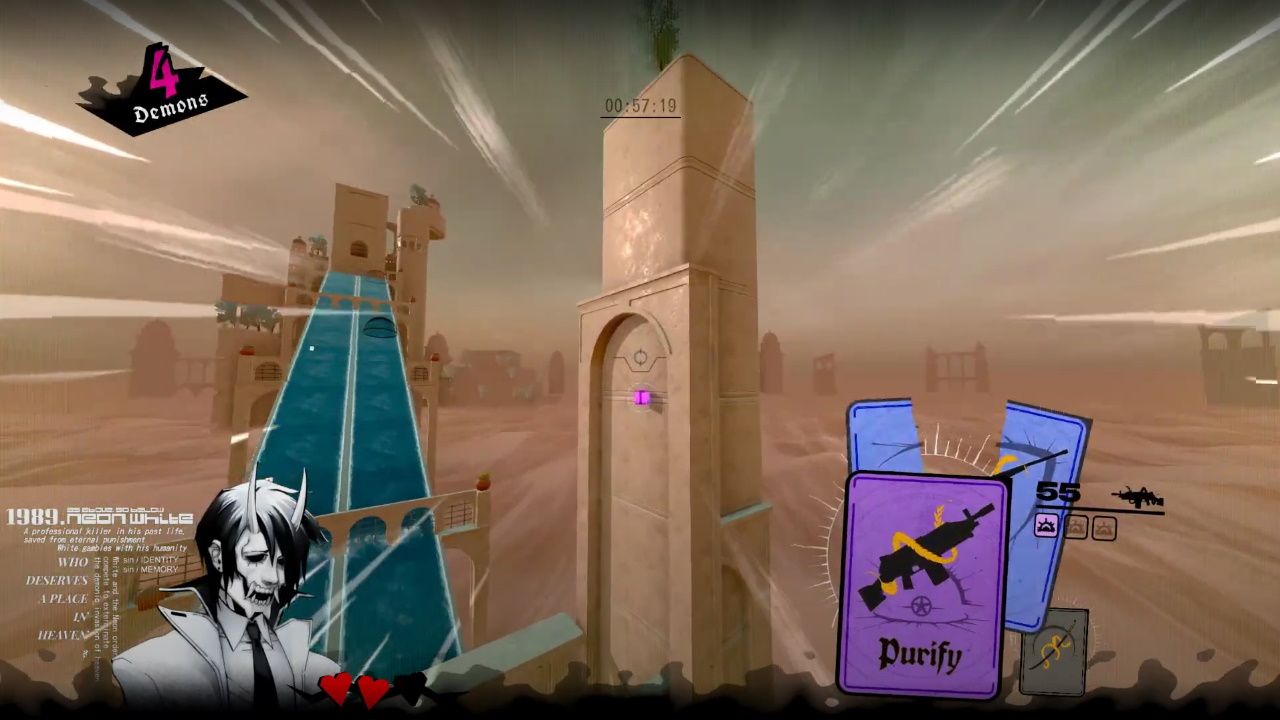 At the very end of the stage, you would typically perform a double jump to snag a sniper rifle and then perform a series of discards to dash between sniper rifles until you reach the level's exit. In order to get to the present, on the other hand, you will perform a bomb jump up to that sniper rifle, then use its discard ability to dash toward the gift (which is to the right of the level's exit). Finally, use your handgun's discard ability to hop up and grab the gift. This will earn you the Tattletail Toy. 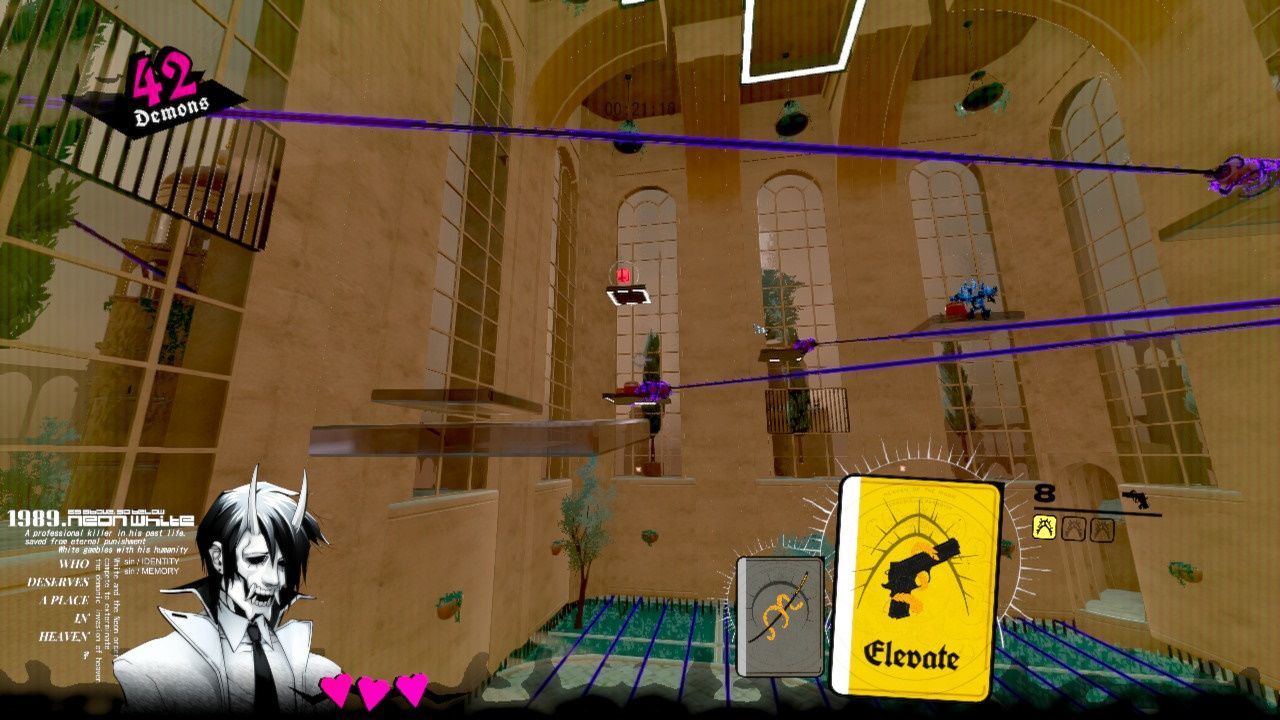 This is a pretty easy one. The present is above you sitting on a glass platform. Just hop from exploding barrel to exploding barrel. Then, when you get to the glass platform section of the stage, do a bomb jump on the platform nearest to the present and pair it with your handgun's discard ability to hop up the rest of the way and lay claim to this stage's present. You will be rewarded with a bottle of Perfume for your efforts. 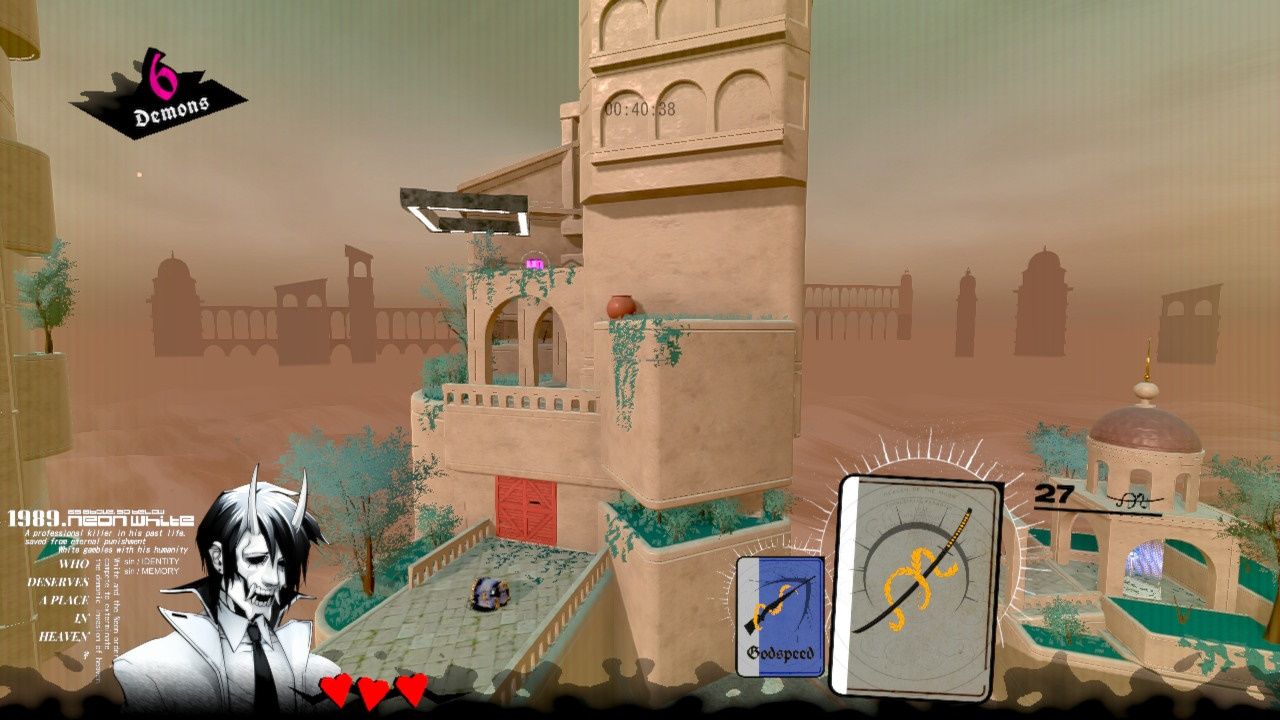 After you take out the second mimic, don't jump across the gap. Instead, backtrack a little and start climbing on pots and jumping onto roofs. Once you are able to hop up onto the roof that is on top of the building that had that second mimic, use the sniper rifle's discard ability to get to the distant ledge. 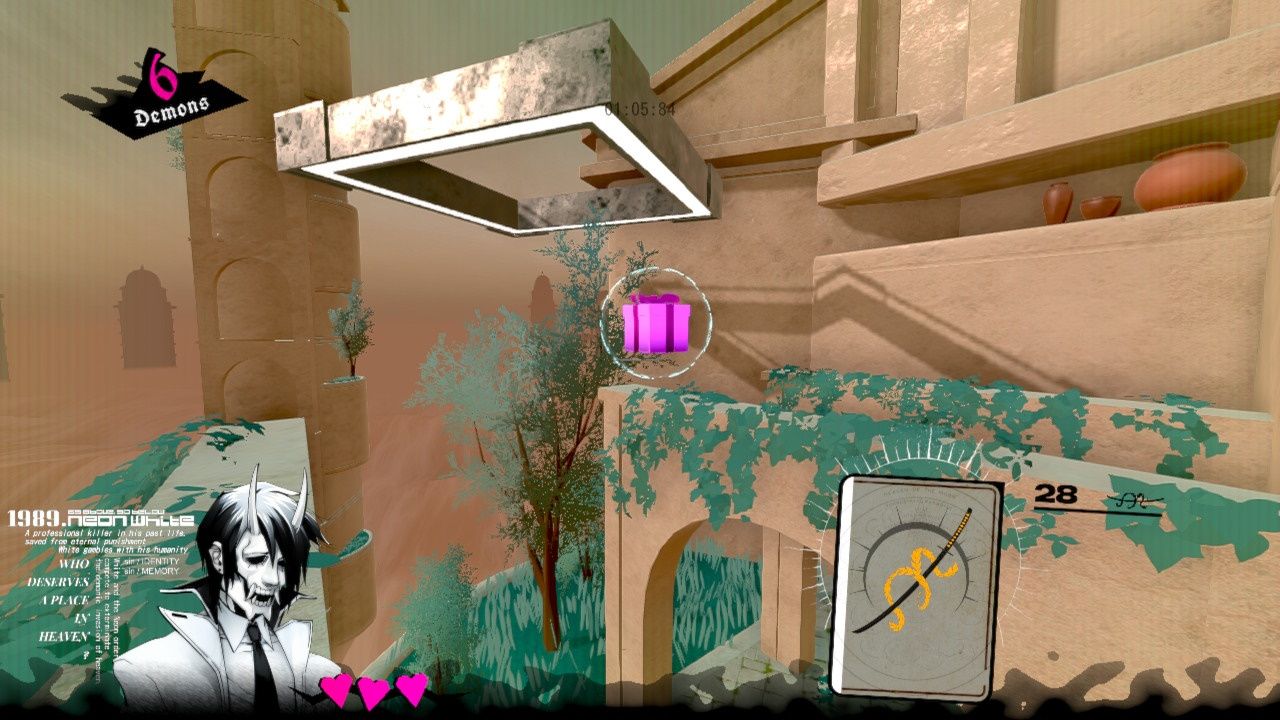 From there, jump onto the big pot, and then get up onto the support beams above. You can now just jump into the gift. You will be able to claim the Tattletail Toy for yourself. 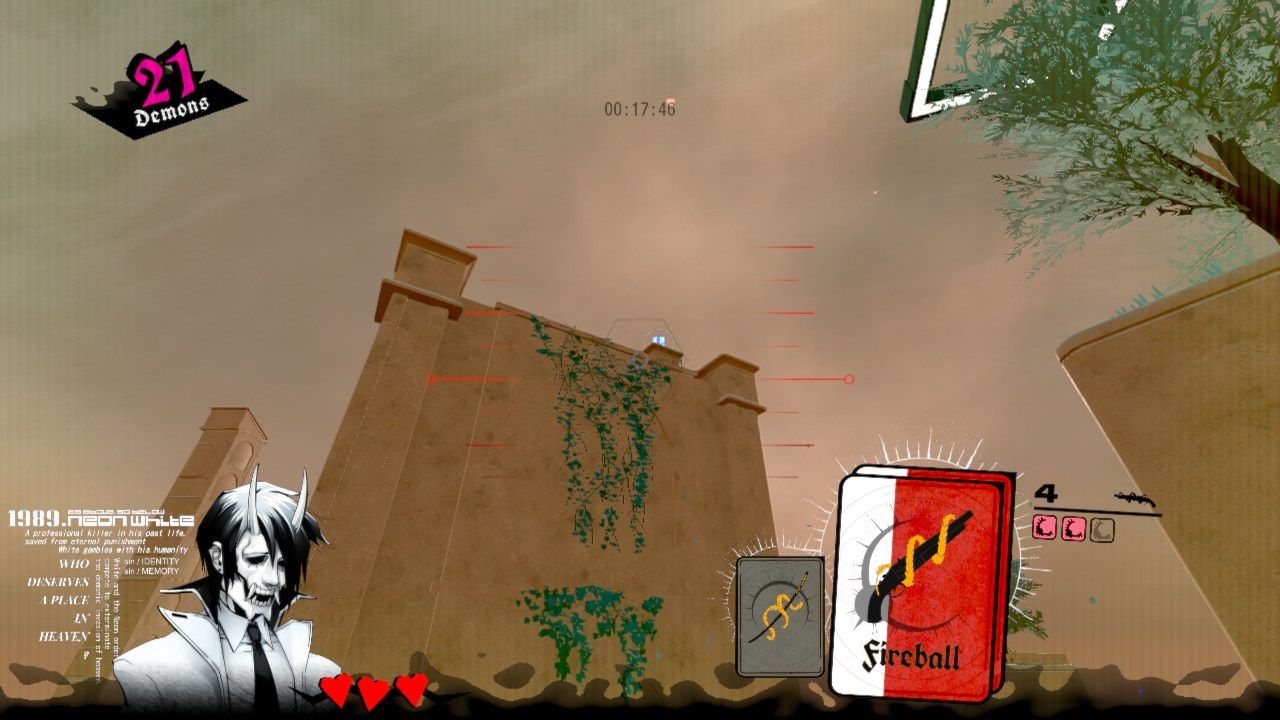 At the beginning of the stage, you will be climbing a staircase composed of balloon demons. Once you climb to the top, there will be two groups of demons, each clustered around a mimic. Shoot the mimics and clear out the demons, but stay put on this platform. 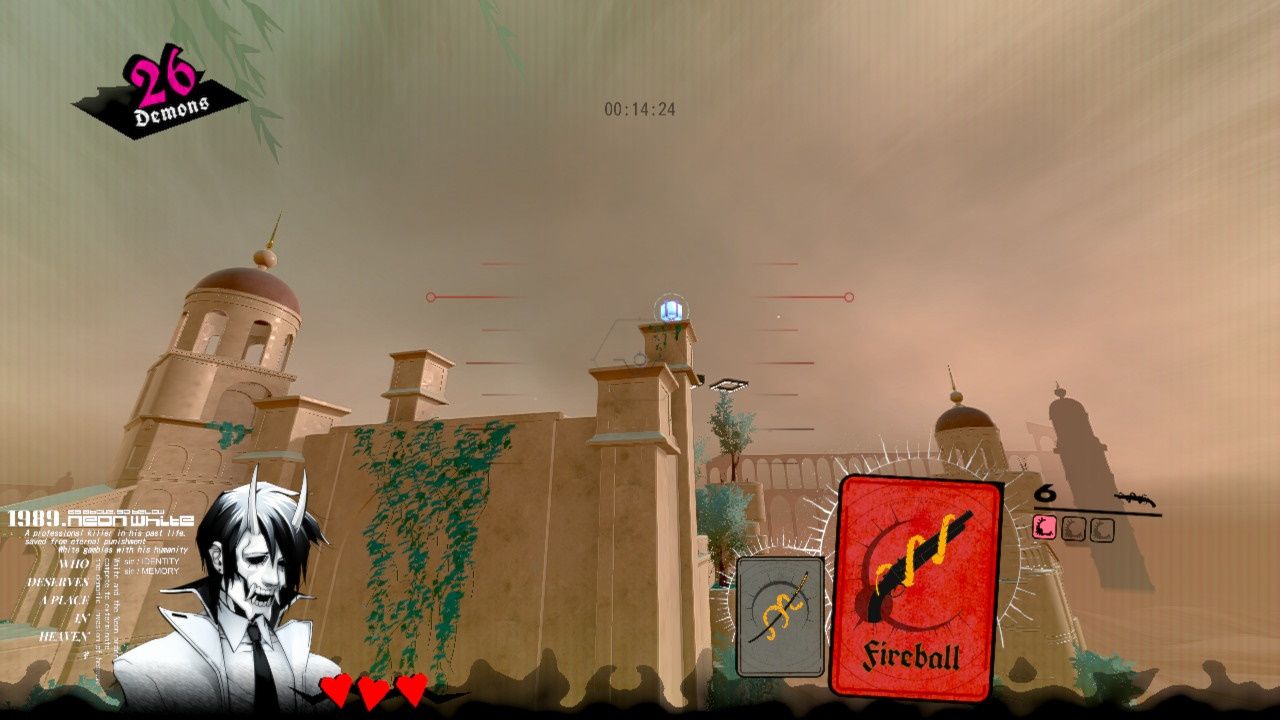 Now, if you look up you will just barely catch a glimpse of the present. You will have two shotguns, which will be just enough to dash up there and get it. Congratulations, you are now the proud owner of a Lucky Cat Statue. 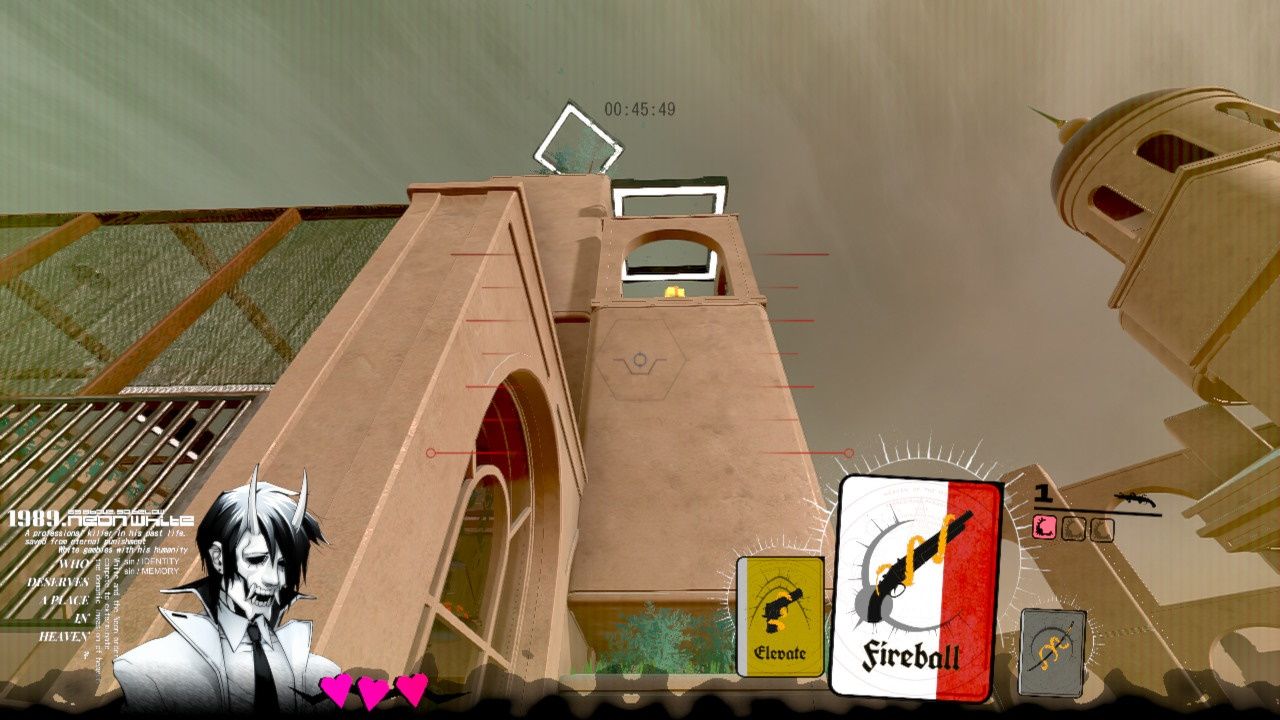 This present is sitting in the tower above this stage's exit. The key to getting it is to preserve your handguns. The good news is that you don't actually need to use any of your handguns. You can jump up to the SMG by climbing on objects in the room, you can fall onto the platform below, and you can use the mimics as objects to help you jump up to the platforms that are just out of reach. Once you reach the end of the stage, you should have three handguns and a shotgun. With that hand of cards, you will be able to easily jump up to that present in the tower. 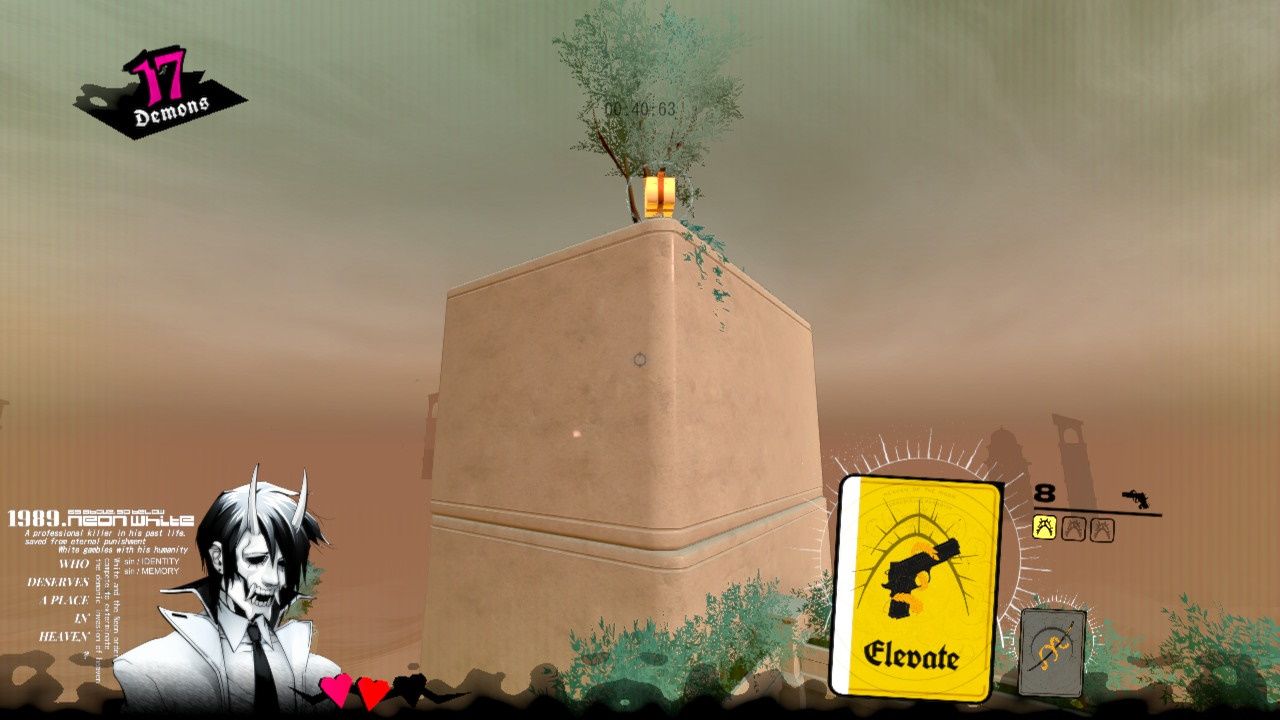 After you cross the gap at the beginning of the stage, enter the building that requires you to blow the red doors down. Now, discard your assault rifle to do a bomb jump and get on top of the ledge of that building. The present should be directly in front of you sitting on the corner of the opposite structure. Use your handgun's discard ability to hop over to it. 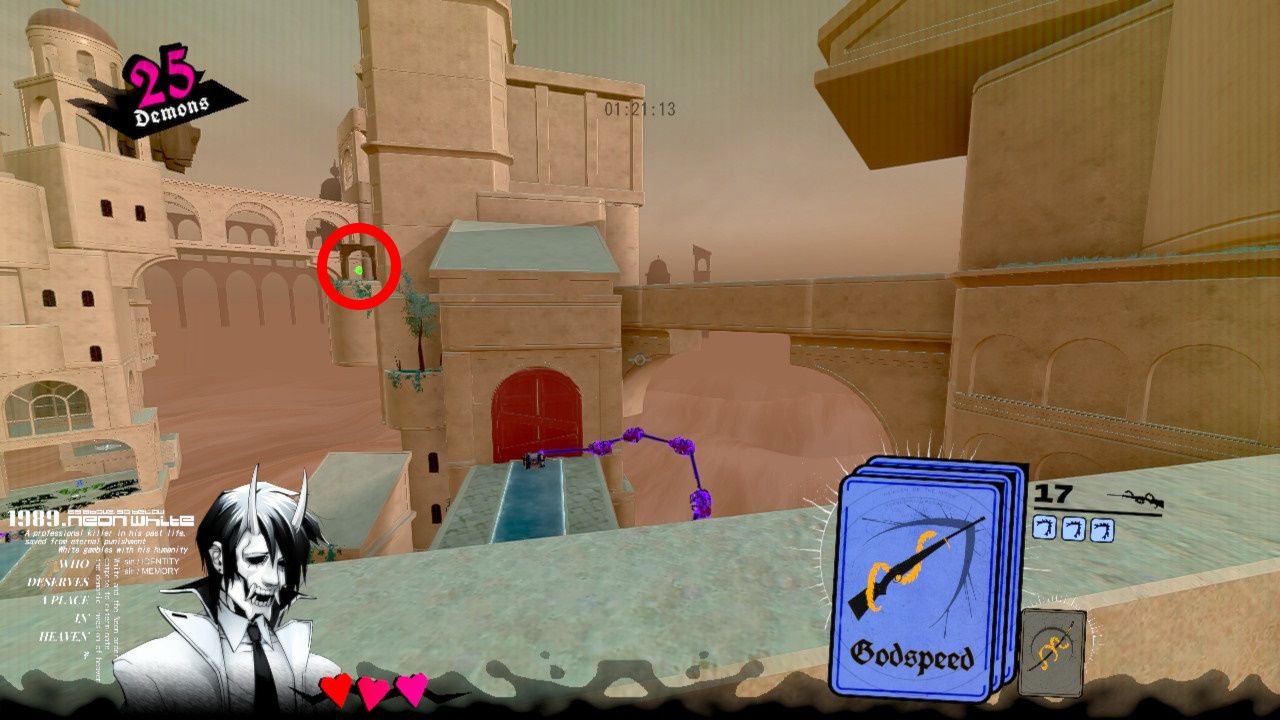 This gift is wholly different from any other gift you have encountered in this game up to this point. Instead of looking for a present, you are looking for an upside-down glowing hand. Once you hit the section at the end of the stage where a landmine demon sends you hurdling toward a yellow demon, hop up to the next platform and take out the mimic. But whatever you do, don't jump down. Across the way and to the left you should be able to see that upside-down hand. Now we just need to get to it. 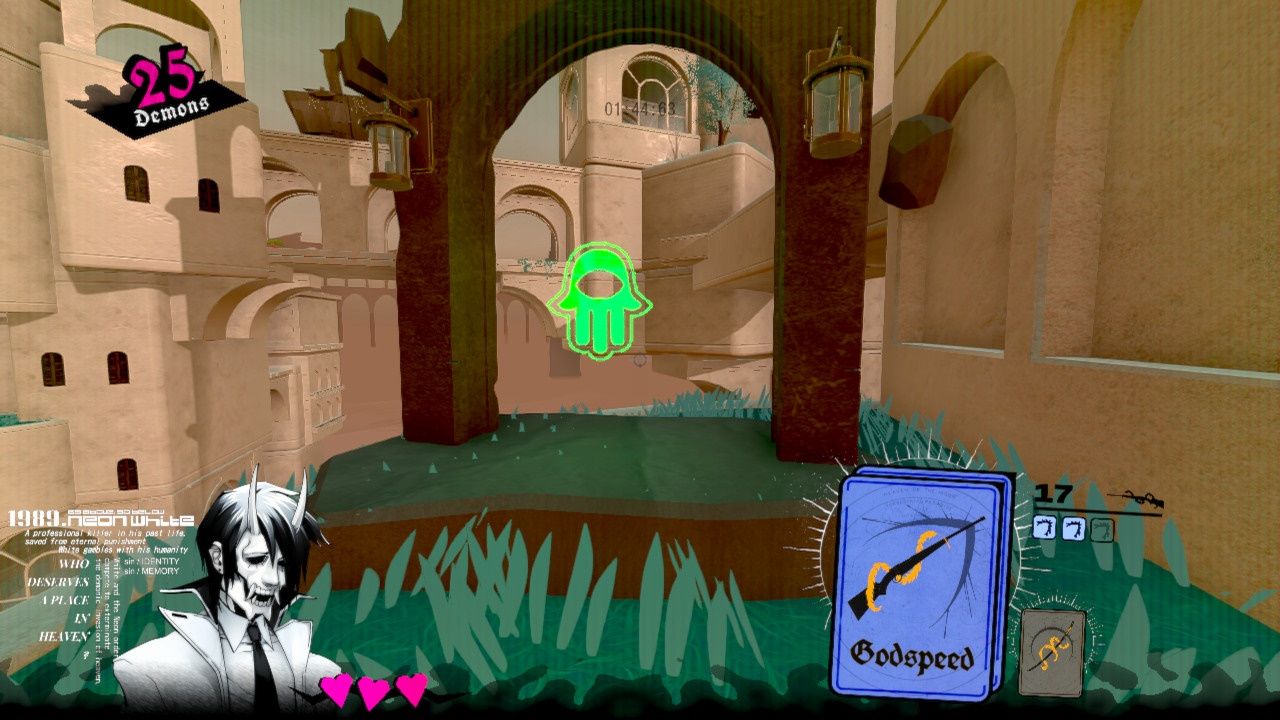 You should have a shotgun on you at the moment. Use it to get to the structure across from you. Work your way around to that hand. You aren't done yet, though. The hand will materialize a ton of balloon demons. Platform around the stage, hoping from demon to demon. At the very end, you will get a shotgun. Discard it to make it to the next glowing hand. You will now be sent to a whole other stage where you need to chase a ghost. Just jump into them and keep pushing forward. Eventually, you will gain your gift: A coin. Curious.