Home » News » Mario Games That Will Never Happen, But Should

Mario Games That Will Never Happen, But Should

So, I was recently gifted a Nintendo Switch, my first Nintendo console since the Gamecube, almost 15 years ago. Still, I've never been a huge Nintendo stan throughout my life. I'm a Playstation player, first and foremost.

However, now that I have a Switch, I've become much more familiar with Mario and company in games like Mario Party Superstars, Mario Kart 8 Deluxe, and Luigi's Mansion. And I'm learning that Nintendo's signature IP is very flexible. So with Mario titles in virtually every genre of gaming, I decided to concoct some game ideas of my own. 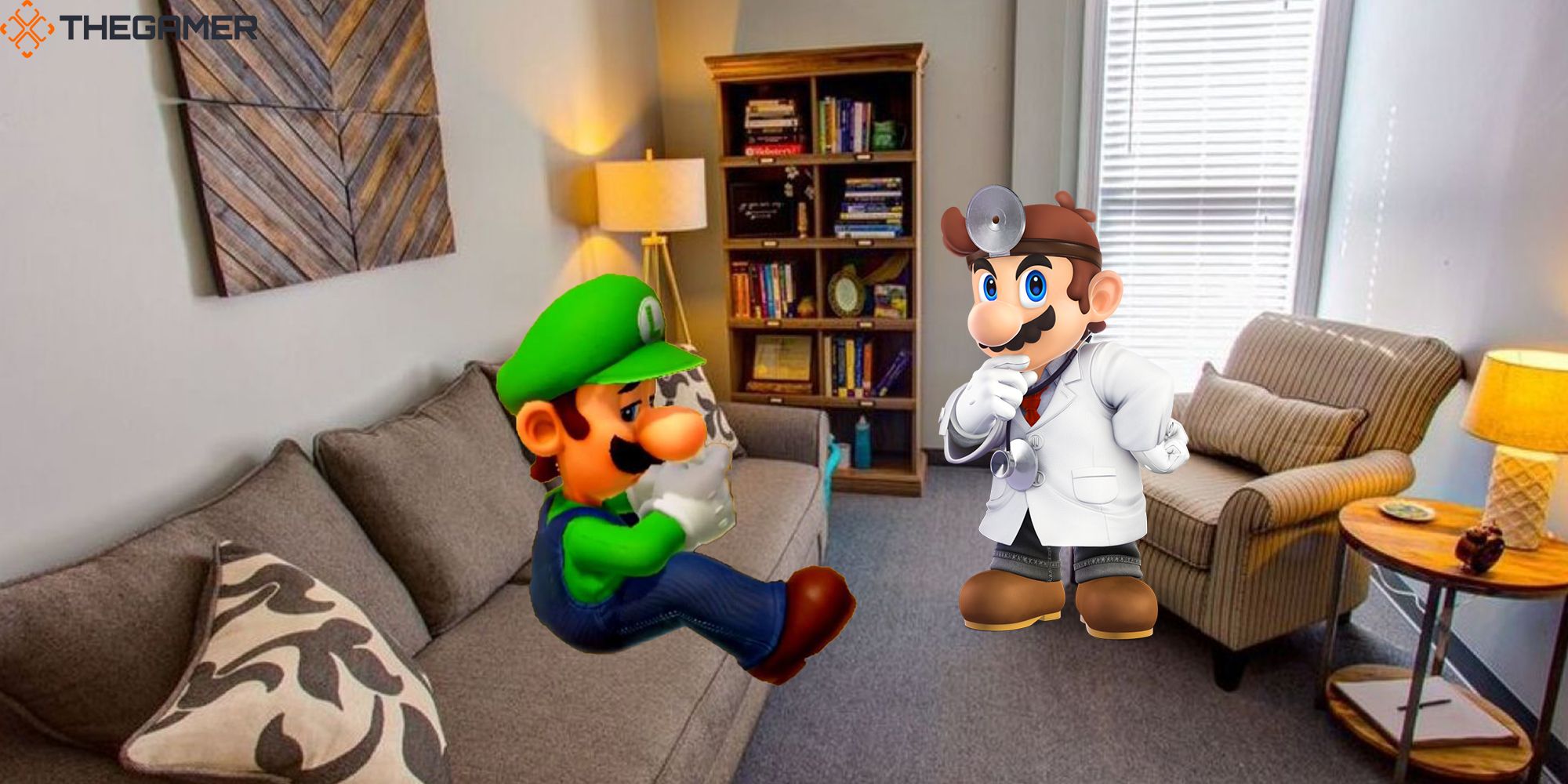 Mario's alter ego, Dr. Mario has practiced for over thirty years, eradicating snarky viruses with his colorful medicine capsules. Furthermore, as the series progressed, more characters from the Mario-verse have earned their doctorates from whatever college grants medical degrees for jumping on turtles and eating mushrooms. For instance, we've seen Dr. Luigi on Wii U and the latest iteration, Dr. Mario World, has various doctors from the Mario-verse, each with a distinct ability.

I'm glad the Mario crew is giving back to the world. In fact, I'd argue they have some penance to do for all the friendships Mario Party has broken up over the years. Still, I feel like these Doctors Without Bowsers (just kidding, there is a Dr. Bowser) are missing an essential tenet of health: mental health. Therefore, I think it's time Dr. Mario got his PsyD and checked in on how his patients are feeling.

I would imagine a Dr. Mario Therapy game would depart the series' puzzle roots and delve into the visual novel genre. This would be an excellent opportunity to get the in-depth details about our favorite characters' lives. For instance, why is Luigi afraid of virtually everything? Is Princess Daisy secretly in love with Princess Peach? What's the deal with Bowser's anger issues? And how will Dr. Mario listen to all these stories without breaking patient-doctor confidentiality? I say it's time we examined that. 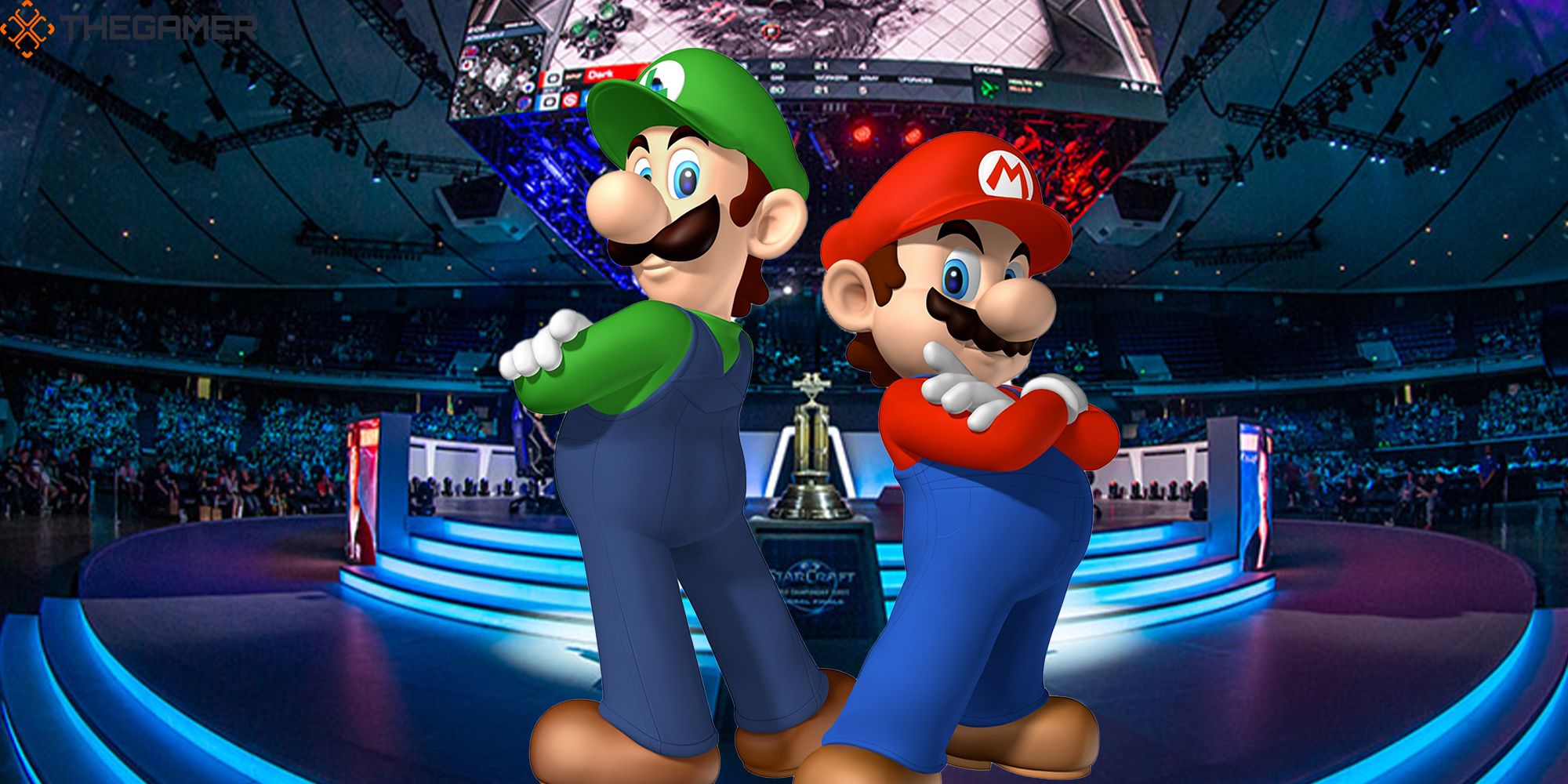 Nintendo has proven that Mario and his band of peppy friends are very athletic. After all, there's Mario Tennis, Mario Golf, Mario Strikers (Soccer/Football), and the Mario & Sonic Olympic Games. However, we've yet to see if our favorite Italian plumber has what it takes to "git Gud." Therefore, I propose a new addition to the Mario sports sub-genre: Mario eSports.

A Mario eSports game is so meta it might work. Imagine a world of video game characters playing video games competitively. Perhaps they're even playing Smash! Wouldn't that be wild!?

Or maybe Nintendo will make a handful of Mario minigames inspired by titles like DOTA, Rocket League, or Starcraft. Of course, at that point, why not make these games standalone titles? Hmmmmm…That's a perplexing conundrum.

Perhaps a Mario eSports title would not have any "gaming." Instead, this title might make more sense as a team management sim. This eliminates the pressure of developing eSports-level games within games without sacrificing the allure of packed convention centers and derogatory trash talk.

Of course, there's always the possibility that Mario eSports becomes an eSport of its own. At that point, though, I believe the question is no longer if this game could get made but should. 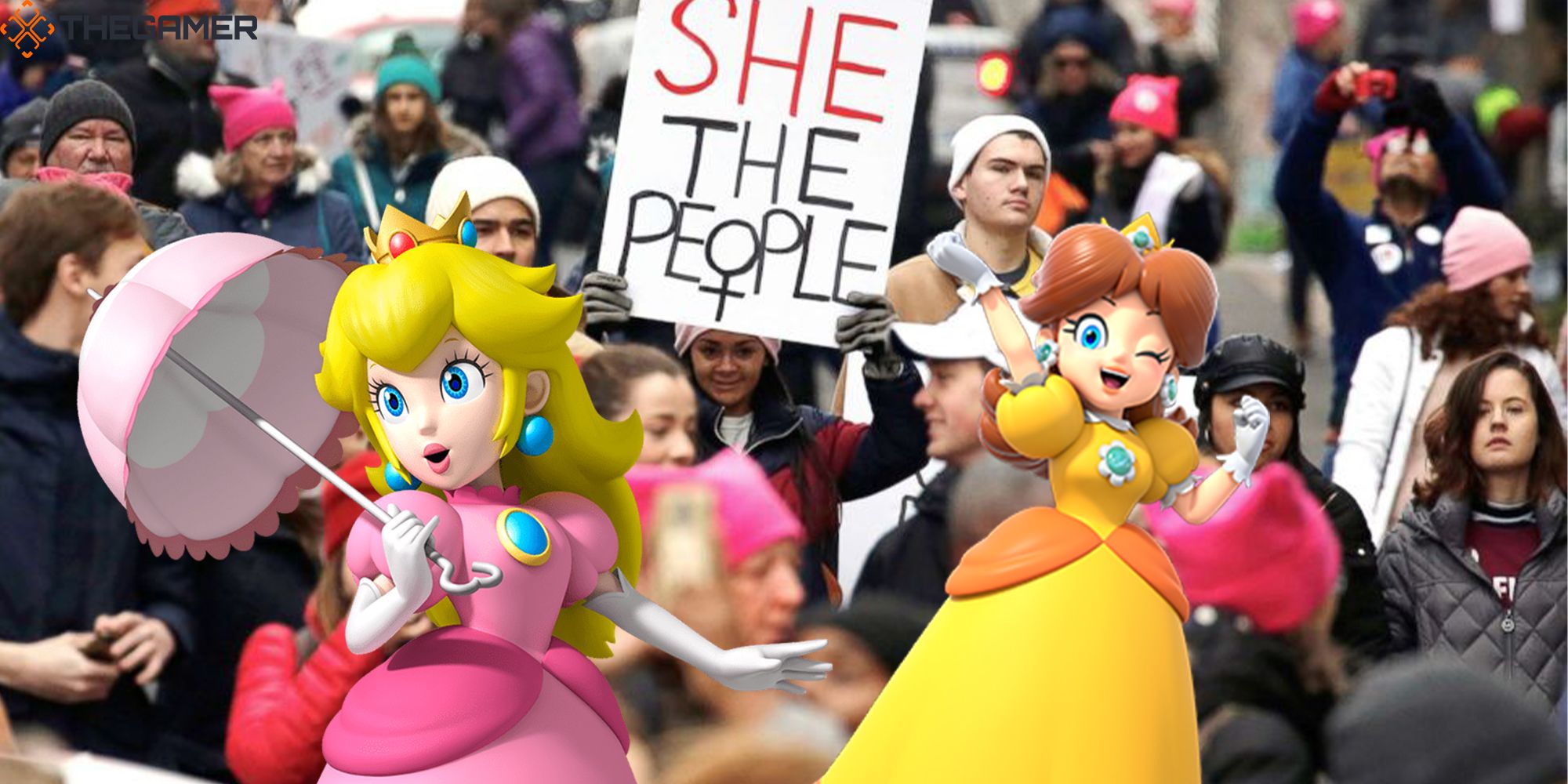 Did you know that Princess Peach has only led two video games? The first was Princess Toadstool's Castle Run in 1990. Fifteen years later, Super Princess Peach was launched in Japan in 2005, with a worldwide launch in 2006. Considering Peach is a trailblazer of gaming history, this small pair of offerings is insulting to me.

Furthermore, there's a valid argument for a new Peach-led game. For instance, Super Princess Peach sold over a million copies, ranking as one of the best-selling games on the Nintendo DS. So the demand for a sequel is definitely there. Still, I don't want the next Princess Peach game to politely ask permission before sailing on a parasol to the Switch. Heck no! I want Princess Peach and her sister in arms, Daisy, to kick the door down with no apologies! It's time for justice in the Mushroom Kingdom!

Furthermore, I think this title would be an excellent opportunity for Nintendo to introduce more characters of color. (And no, Bowser and Yoshi do not count.) 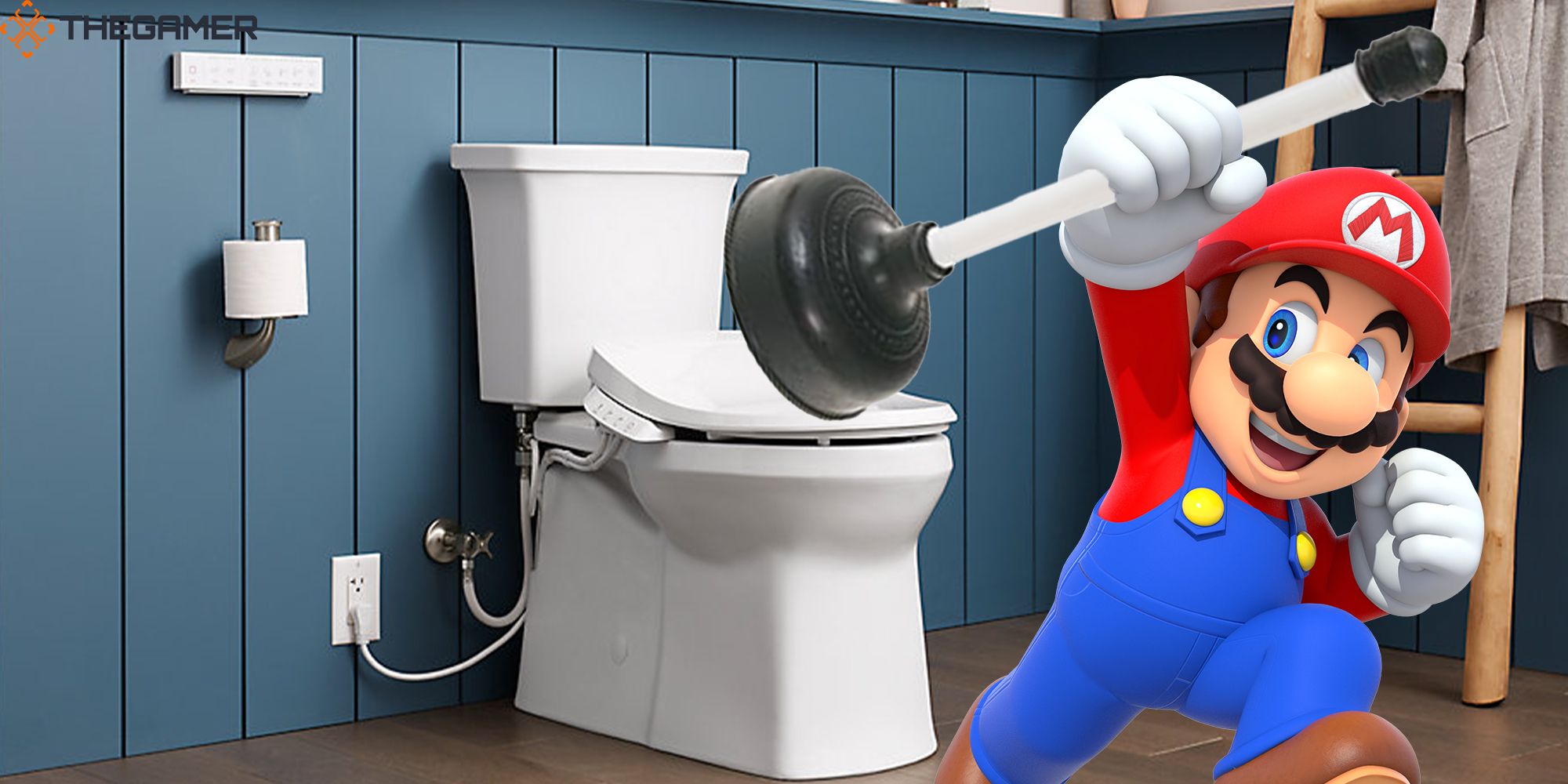 Has anyone ever seen Mario actually plumb a toilet in his thirty-plus years of existence? Seriously. I want you to think about this for a second. We've seen Mario play professional sports, work as a doctor, and dabble in competitive fighting. Yet, when it comes to his actual occupation, his track record is shit. I think it's time Nintendo took a Dirty Jobs approach and showed us what Mario's life was like before he was saving princesses and battling bowsers.

Simulator games have had more industry presence since the days of Sim City. For instance, there are cooking simulators, lawn mowing simulators, flight simulators, and even bus driving simulators. So, it's about time Nintendo claimed its stake in the market.

Furthermore, plumbing and gyroscope controls make a ton of sense together. For instance, you could jerk a joycon up and down to perform a plumbing motion. Or, you could turn a joycon to emulate tools like wrenches and screwdrivers. Basically, any game from 1-2 Switch could get reworked into a plumbing mechanic.

Sure, the subject matter is potentially less than family-friendly. Still, it's Mario, for crying out loud! Just replace the poop with smiling defecation people or something. Indeed, Wapooigi is well within the realm of possibility. 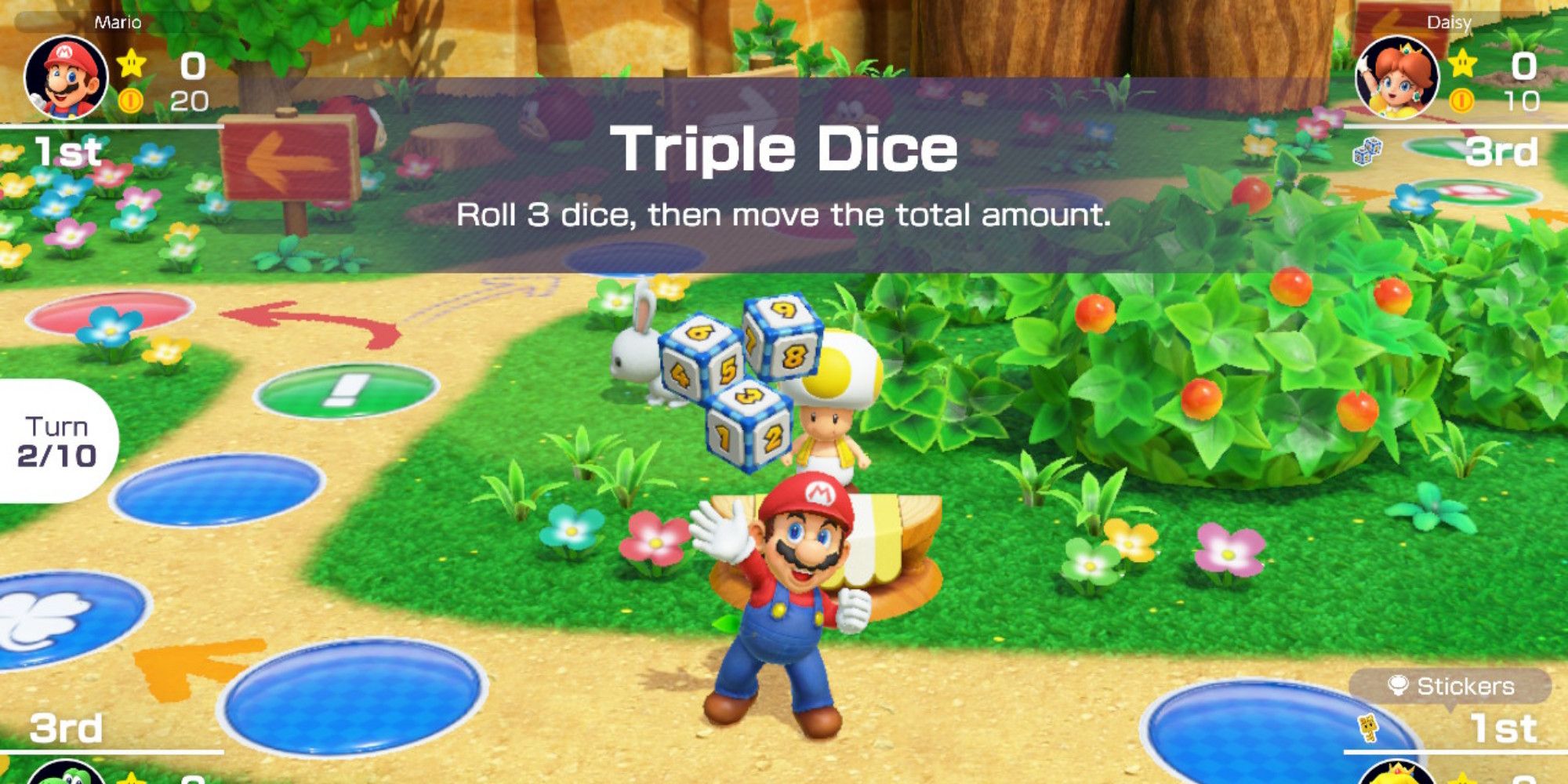 Has this ever happened to you? You're playing a game of Mario Party with your friends. After outranking everyone in the minigames and harvesting the most stars, victory feels all but assured by the last turn. And then the fucking bonus stars come out. Your best bud Bob clinches the game despite your hard work and master skills because he was the slowest player.

Filled with justified rage, you call BS. Bob eggs you on. The situation gets heated. And in less time than it takes to bounce on a Koopa Troopa, you say something that can't get taken back. Bob says he never wants to see you again. You happily oblige, even though, deep down, you immediately regret everything.

Years pass. You and Bob start families of your own. Every now and then, you watch your children playing Mario Party 2033 on the Nintendo SuperSwitcharooMiiToo and think, "Man. That was Bob and I's favorite." Then you remember that fateful night when it all went wrong. You take a breath and longingly stare at your phone. Once again, your loving and supporting wife, Amelia, puts her hand on your shoulder and says, "Call him."

Your trembling finger hovers over Bob's contact number on your iPhone 2XL. But, of course, your fingertip can't contact the screen. "It's been too long," you assume. "Why would he want to hear from me now?" This pattern repeats itself over five console generations.

It's 2056. The kids have moved out and started families of their own. You and Amelia have settled into a condo in Florida to enjoy your golden years. After taking a second honeymoon to that New Age Yoga Retreat, you decided to live in the moment with no regrets. You've managed to push Bob out of your mind.

Your phone rings. It's an unidentified number, so you silence it. Afterward, you hear a ping. Apparently, whoever called left a voice mail. You listen:

"Hey, old friend. Bet you won't believe who this is!" the all too familiar voice says between harsh coughs.

"Ummm. God, this is hard. Just- please don't delete this. It's important. I'm dying, Joe. End-stage pancreatic cancer… Can you believe it? I'm slow as dirt in Woody Woods, but my tumors grow faster than a Bullet Bill."

A single tear rolls down your face. You chuckle at Bob's bad joke. He always knew how to find humor in a crappy situation.

"Anyway. My therapist told me I should let go of any grudges, tie up loose ends, all that crap. And I just wanted to say I'm sorry for being such a garbage person that night. No matter who said what, I don't care anymore. You'll always be my best friend. I love you, man…So uh…Take care. Tell Ami I said 'Hey!'…Alright. Bye."

Hyperventilating, you immediately call back the number. It can't end like this. It just can't! Bob's wife answers. Her name's Betty, she's a sweet lady. She tells you she's with Bob in a Hospice Center a few states away. He has a couple days left in him, she says. You get the address to the center and book a red-eye flight ASAP.

After landing at the airport, you quickly grab your luggage and book an Uber. On the way to the Hospice Center, you stop at a local toy store. You buy a plushie star to give to Bob, the biggest star in your life.

With a star in your hand and hope in your heart, you go to the front desk of the Hospice Center and ask for Bob Bentley. A grim look falls upon the receptionist's face. He makes a call to Bob's room. A few minutes later, Betty greets you with tears in her eyes.

You run to this stranger and embrace her like family. Then, the two of you sob in each other's arms.

Betty looks down and sees the lonely star in your hand.

"Oh my goodness! Is that what I think it is?"

Betty smiles, "Oh, Bob would've loved this! Would you like to see him?"

You look down awkwardly. Suddenly you revert back to the shy five-year-old that Bob asked to play on the jungle gym with on that breezy autumn pre-school day. Betty, a retired pre-school teacher herself, knows that look all too well. And with a strange calmness and authority, she tenderly takes your hand and guides you down the hall to Bob's room.

Upon entering, you notice Bob's cold, withered face. A wail erupts from the pit of your gut. Betty holds you tight and soothes you.

You take a deep breath, gather yourself, and walk to Bob.

"Hey Bob," you stutter between shivers of grief, "I guess I'm too late."

A string of snot erupts from your nose. You become more vulnerable than ever in front of anyone, even your wife.

"If you can hear me…up there…Um. I just want you to know that there is no need to apologize. If anything, I'm the sorry one. I shouldn't have said any of that stupid crap."

A wave of anger takes over. You start smacking your face because punishment feels like the only thing you deserve. Betty reminds you to breathe. You follow her instruction and focus on Bob. You place the star under his arm like a companion he'll take to a new world.

You let go of years of questions, regrets, and pain at that moment. Your body falls on Bob, and tears trickle from your face onto his body like a pillow collecting sweat. Betty walks behind you and rubs your back as she's done many times for a child who fell on the playground asphalt. You did your best, Joe. You did your best.

This could have all been avoided if Mario Party was fair!

And no, offering an option to disable bonus stars does not count. The option to have bonus stars should not even be there! They've done too much harm.