Home » News » Magic: The Gathering – The Best Art From The Brothers’ War

Magic: The Gathering – The Best Art From The Brothers’ War

Part of what makes Magic: The Gathering so special in comparison to other card games is the commissioning of unique art for each card upon every set release. While the art may have nothing to do at all with the gameplay mechanics of Magic, it evokes a sense of wonder and inspires the imaginations of players the world over.

Old-time favorite cards like Serra Angel and Shivan Dragon earned their popularity in large part due to the beautiful artwork with which they are decorated. While the reputation of and conversation about Magic card art among players may not be as common as it was in earlier days, the success of product releases such as Secret Lair drops goes to show that there is no shortage of art enthusiasts in the Magic community. All that being said, let's take a look at some of the most beautiful new renditions found in Brothers' War. 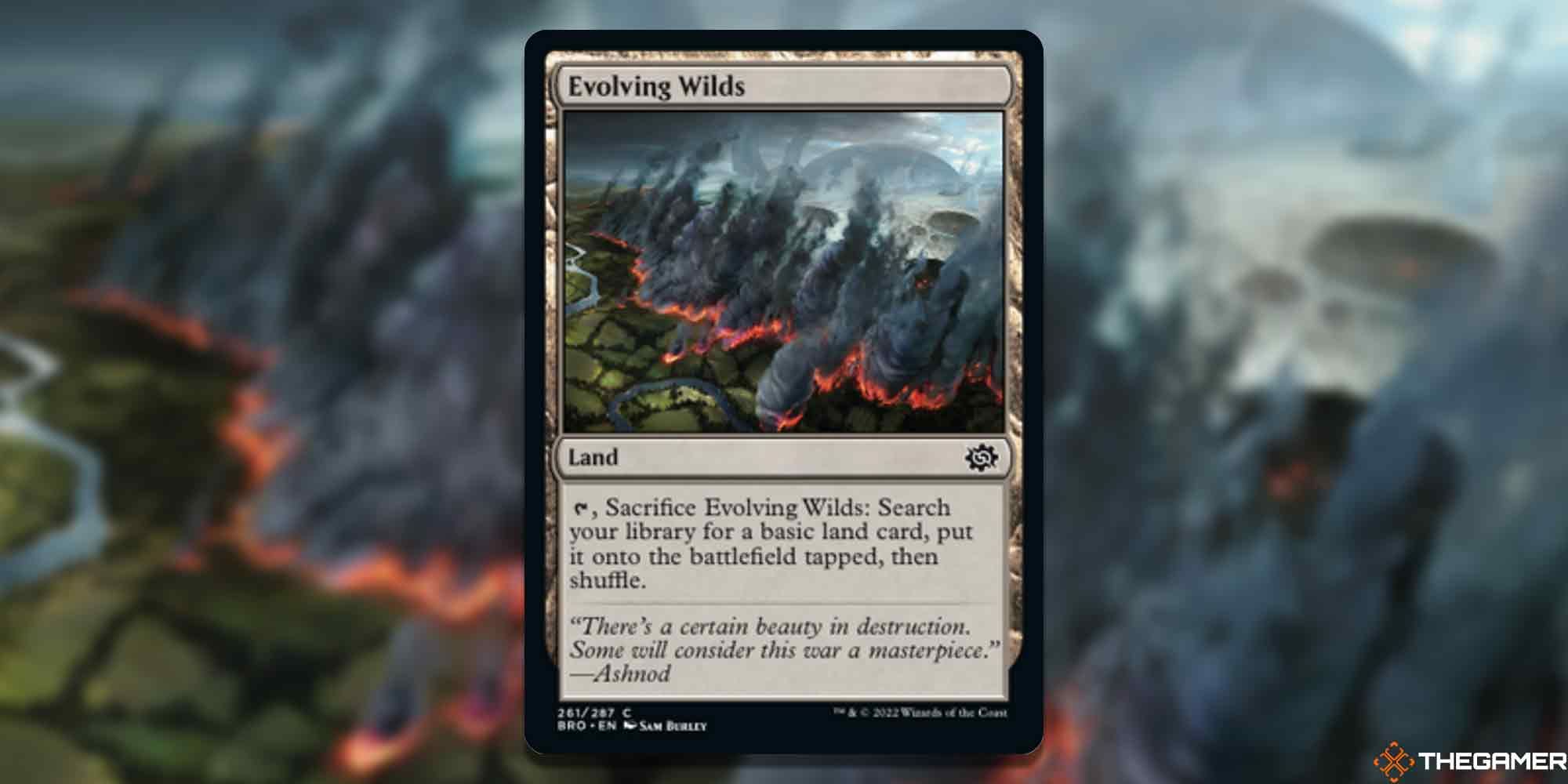 The loveliest thing about the art Magic brings us is that it often tells a story. When it comes to reprinted cards like Evolving Wilds, it's the story of the set that informs exactly what direction an artist might take. While you would think a card like Evolving Wilds, which has seen dozens of printings over the years might be running slim on unique art ideas, Sam Burley proves otherwise.

Brothers' War is about a sibling rivalry that escalates into a worldwide war which changes the shape of the setting and planet of Dominaria forever. In this depiction of Evolving Wilds, we see the wilderness evolving from lush, green meadows into crater-ridden, pockmarked wasteland as the war rolls over the landscape leaving only devastation in its wake. 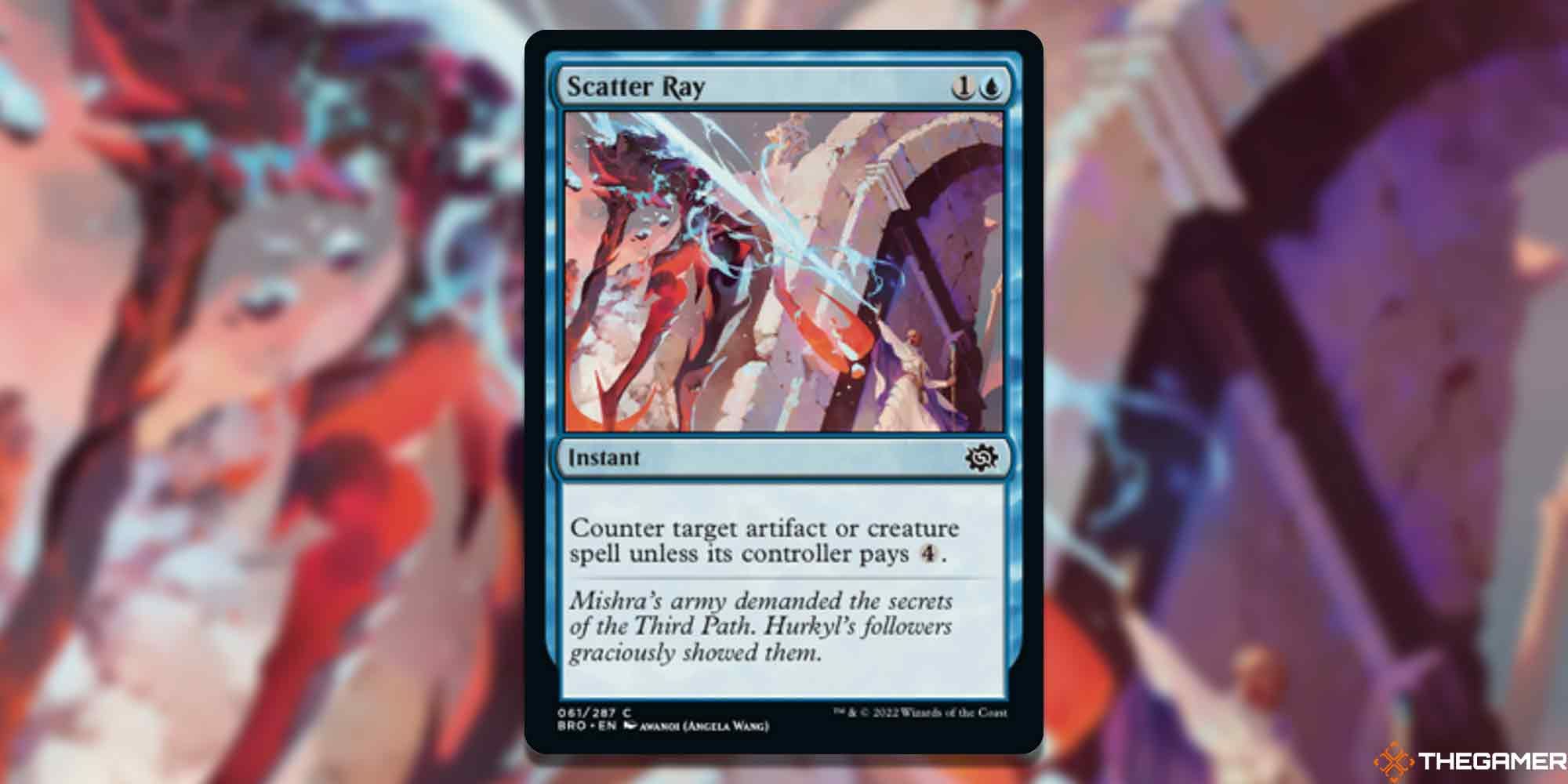 Scatter Ray by Awanqi (Angela Wang) does a great job of illustrating a contrasting color palette. Beyond the beauty of the colors used here though, there's also something so compelling about the idea of a battleforged machine marching up to a temple of wizards only to be dismantled by a single flick of a mage's wrist.

The crumbling white temple in the backdrop of this piece also does a great job of adding depth to the drawing in both a literal and figurative sense. The shadows on the inside of the temple especially hint at the deep and ancient powers the depicted spellcaster so brazenly puts on display. 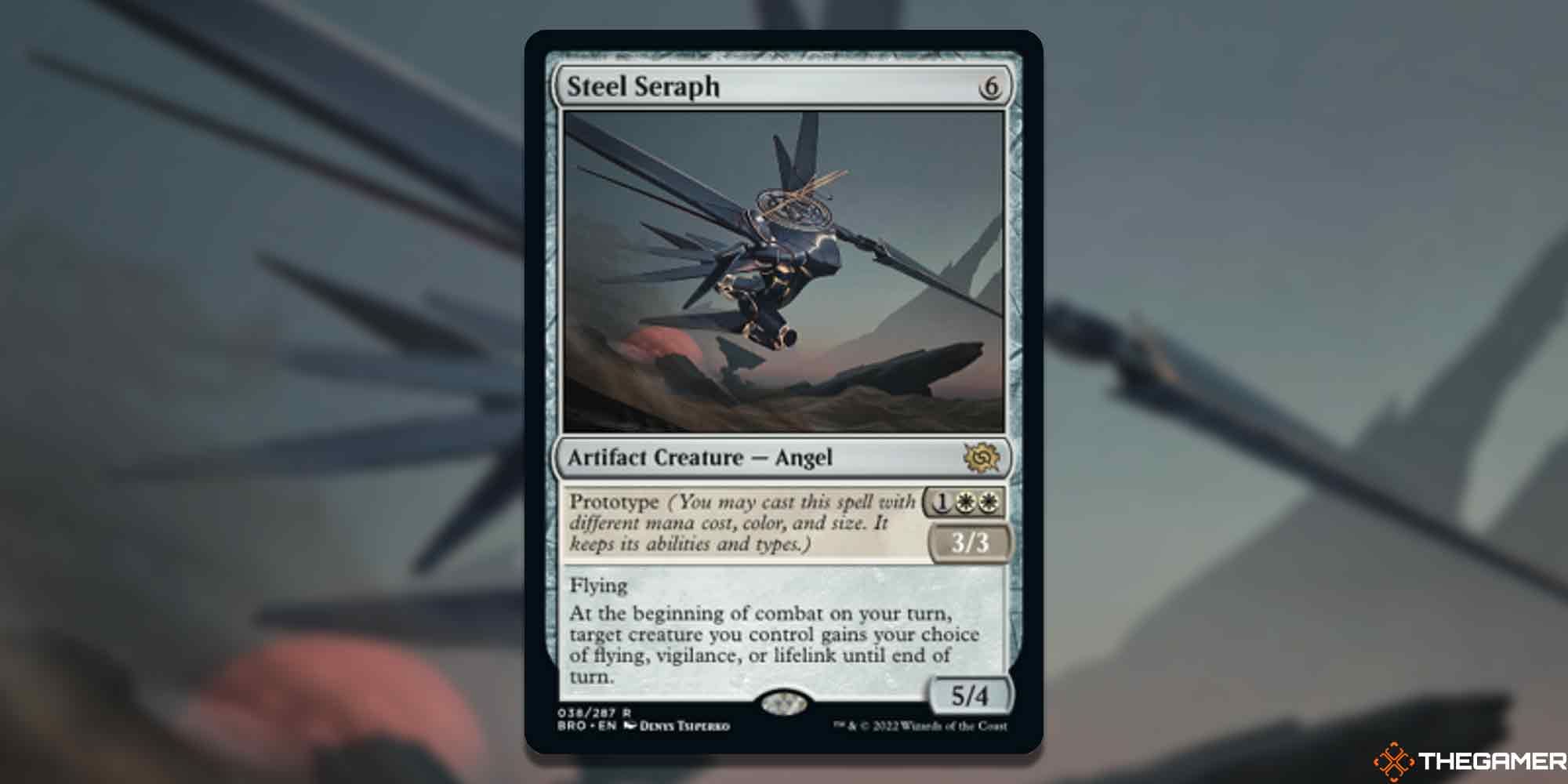 A robotic angel kind of sounds like an oxymoron to some degree, but this illustration by Denys Tsiperko does the idea justice. The sharpened angles that make up this machine's body bear a resemblance to angelic wings while the glowing white light extending from its various joints calls back to the light of the sun in the sky.

Tying it all together is the halo-like device atop the seraph's body. It's also worth mentioning that the landscape surrounding this angel mirrors its own angular nature, driving home some of the finer points of the piece. 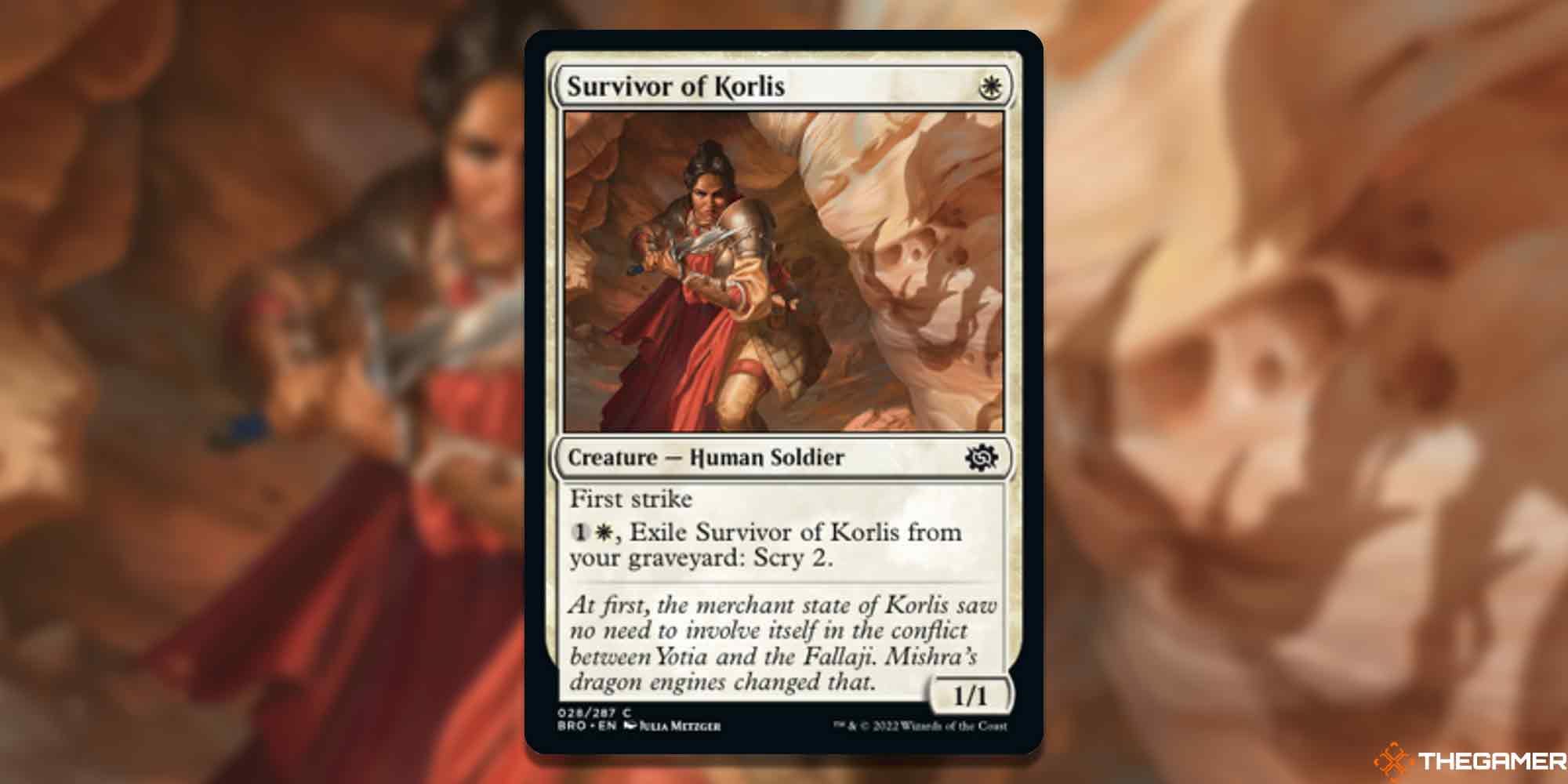 As far as cards that tell stories are concerned, Survivor of Korlis by Julia Metzger is an example of this practice functioning at high level. The rocky cave-like surroundings of the piece as well as the soldier's broken blade convey the history of an entire battle with just a couple of set pieces.

Furthermore, the looming shadow of the assaulting machines on the foreground wall is a perfect method of depicting the threat that the machines pose while keeping the focus of the piece on the surviving soldier. Judging by the look of her sword though, she won't be a survivor for much longer.

Steve Prescott does it again with this riveting depiction of a gigantic Wurm engine closing in on its next victims. It can be difficult to properly convey the sheer size of these kinds of creatures with so little space at the artist's fingertips, but Steve does so with flying colors by using both the foreground and background of the piece to showcase the Wurm's body.

Furthermore, it's a nice touch that the Wurm comes with the menace keyword and is about to descend upon exactly two creatures. The crossroads of form, function, and flavor is where many of the most memorable cards are found. No doubt, Phyrexian Fleshgorger is likely one such new addition. 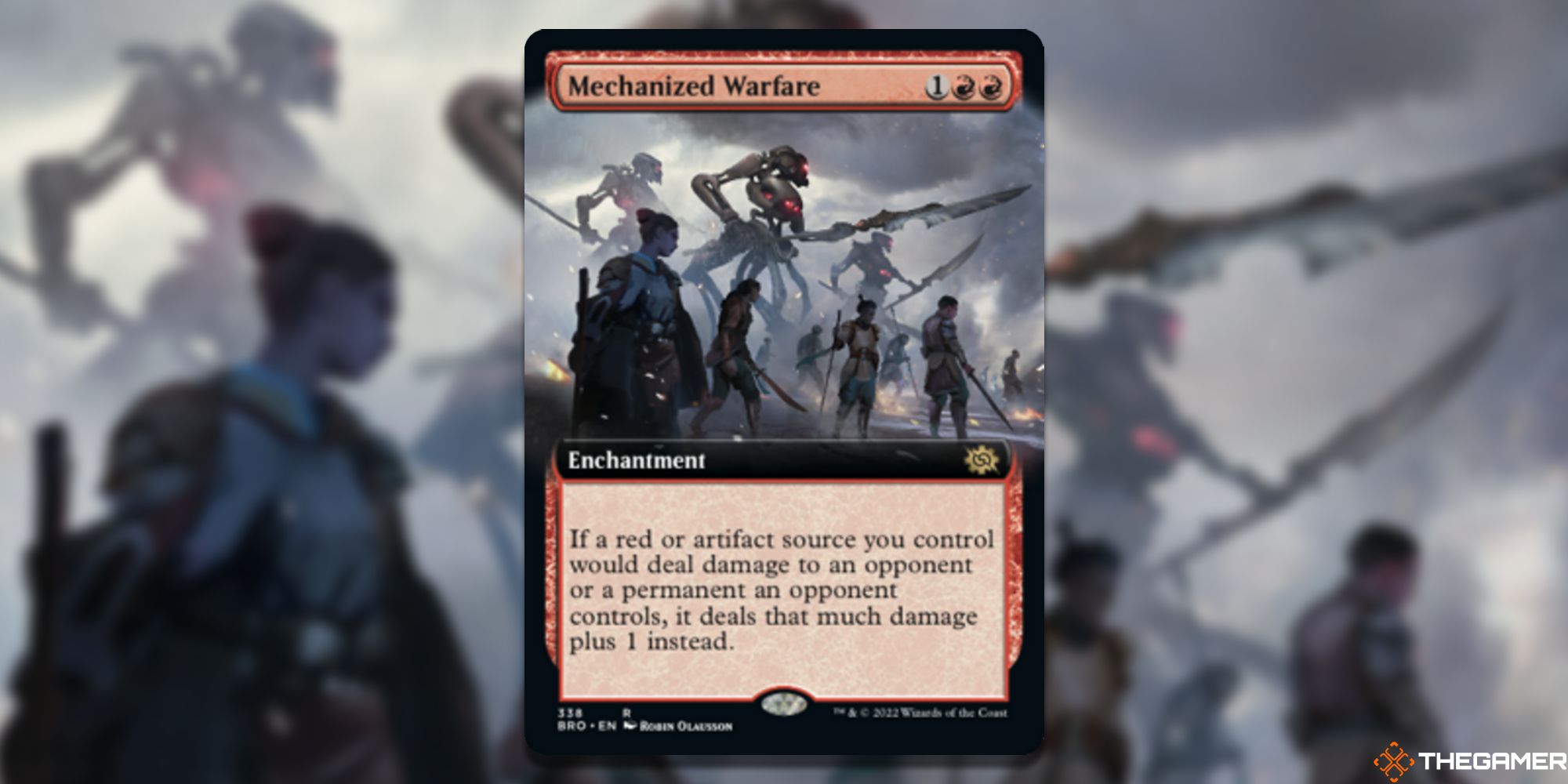 This piece by Robin Olausson is perhaps the best illustration of how the Brothers' War evolved over time. This kind of makes it fitting that the art is featured on an enchantment. The various soldiers equipped for battle in the foreground of the piece seem entirely out of place amid the smoking gray wreck of their environment. However, the robot warriors marching through the mist behind the soldiers look like they're right at home.

It's worth noticing that the human soldiers depicted in the foreground fade from the war as time passes, giving way to the mechanized units seen in the background here. In this way, the piece does a wonderful job of conveying the storyline of the Brothers' War in an easily-digestible manner. 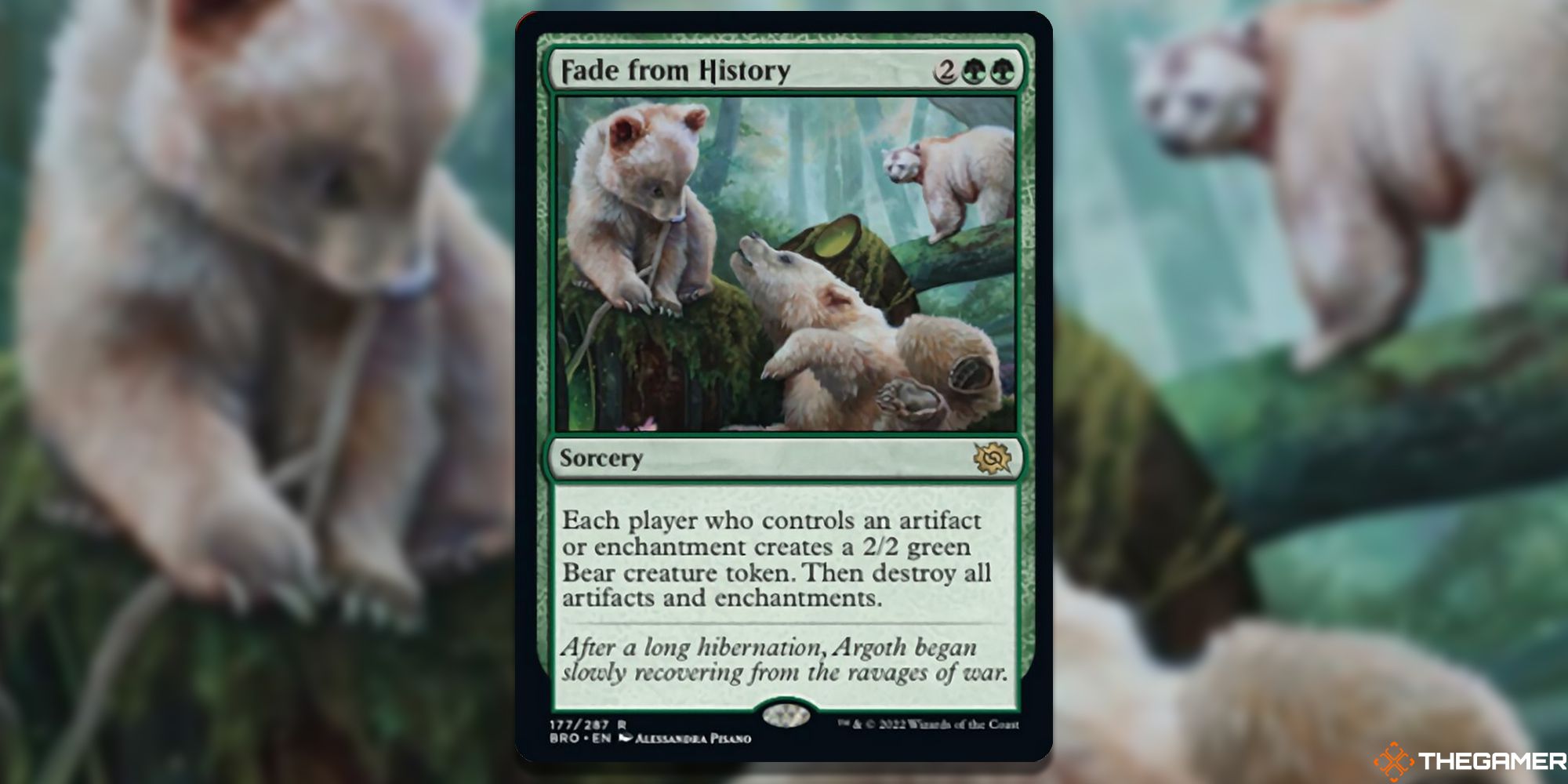 In a strange departure from the larger theme of this set, Fade from History by Alessandra Pisano depicts a much more natural scene years after the events of the Brothers' War. Maybe it's just our soft side showing, but the heavy and depressing themes of death, destruction, and weaponized machinery are in need of a few light-hearted, counterbalancing cards.

Fade from History isn't the only uplifting card art found in the set, but it is the most optimistic. Despite whatever terrible atrocities are committed during the Brothers' War, Fade from History tells us that the natural world will persevere, recover, and, eventually, overgrow the terrors of the war. Hence the scrap of moss-covered metal that the two young cubs joyfully play about.

Aside from the aesthetic beauty of this jaw-dropping artwork done by Liiga Smilshkalne, what really makes Lay Down Arms the most compelling art found in the entire set is how it manages to call back to the art of this card's predecessor: Path to Exile. Taking a look at both cards, it's impossible to say that Lay Down Arms wasn't designed with Path to Exile in mind.

While the art on Path sees a Leonin fading into dust, the art of Lay Down Arms reverses this process by seeing the depicted soldier's past turn to dust as she enters a brighter, life-filled future. Smilshkane's success in drawing inspiration from the game's past art on the same card that Lay Down Arms mechanically draws inspiration from is a metagame-level of artistry that's rarely been seen in Magic history.