A total of 30 new Alchemy cards arrived on June 2 from the Alchemy: New Capenna set. After a couple of weeks of availability to ranked play, the verdict is out on the winners of this release. While the Alchemy format is no stranger to hosting decks that don't use the Alchemy pool of cards, this release certainly added some key pieces for several desirable strategies.

For instance, players who have long tried to put together an Angel tribal deck will now find that Alchemy is currently the best host for such a build, thanks to the cards included in this set. Furthermore, anyone enamored with creature-based strategies, the newly printed Gala Greeters, or a go-wide Cabaretti deck, in general, will presently find no better home than Alchemy. 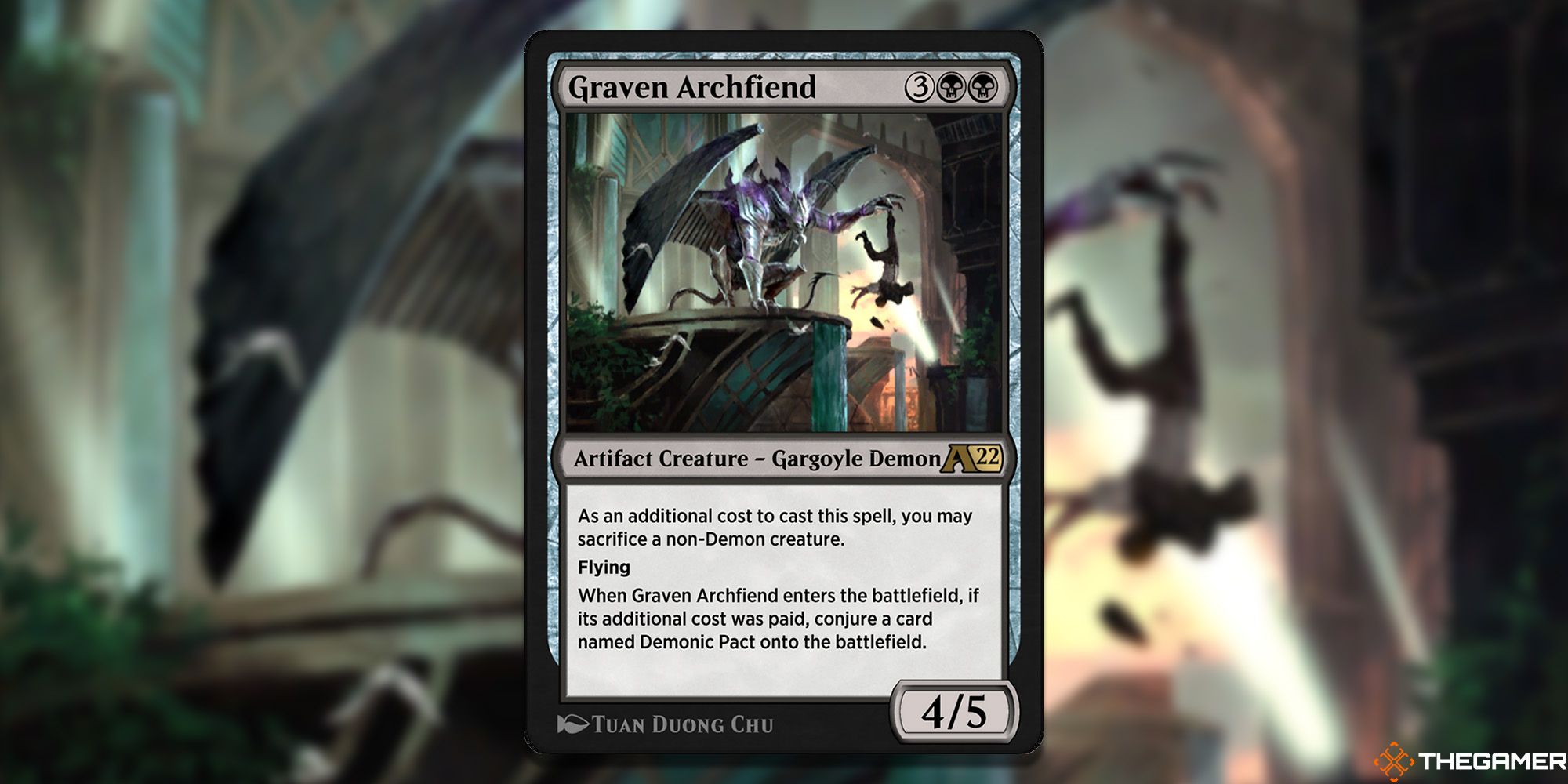 This demon is a blast from the past in disguise. While Graven Archfiend's stats are mediocre for the CMC (converted mana cost), this card's true power comes in its text. Players who were familiar with Standard back when Magic Origins was released should be pleasantly surprised to have a chance at playing Demonic Pact once more.

And this time, it comes with a big evasive body to boot for only a single more mana. Demonic Pact is an incredibly powerful enchantment that acts as removal and extreme card advantage. However, it does come at the cost of potentially losing you the game should you be unable to get rid of it. Thankfully, cards like Invoke the Divine and Return to Nature offer low mana cost solutions to Demonic Pact's time-ticking problem. 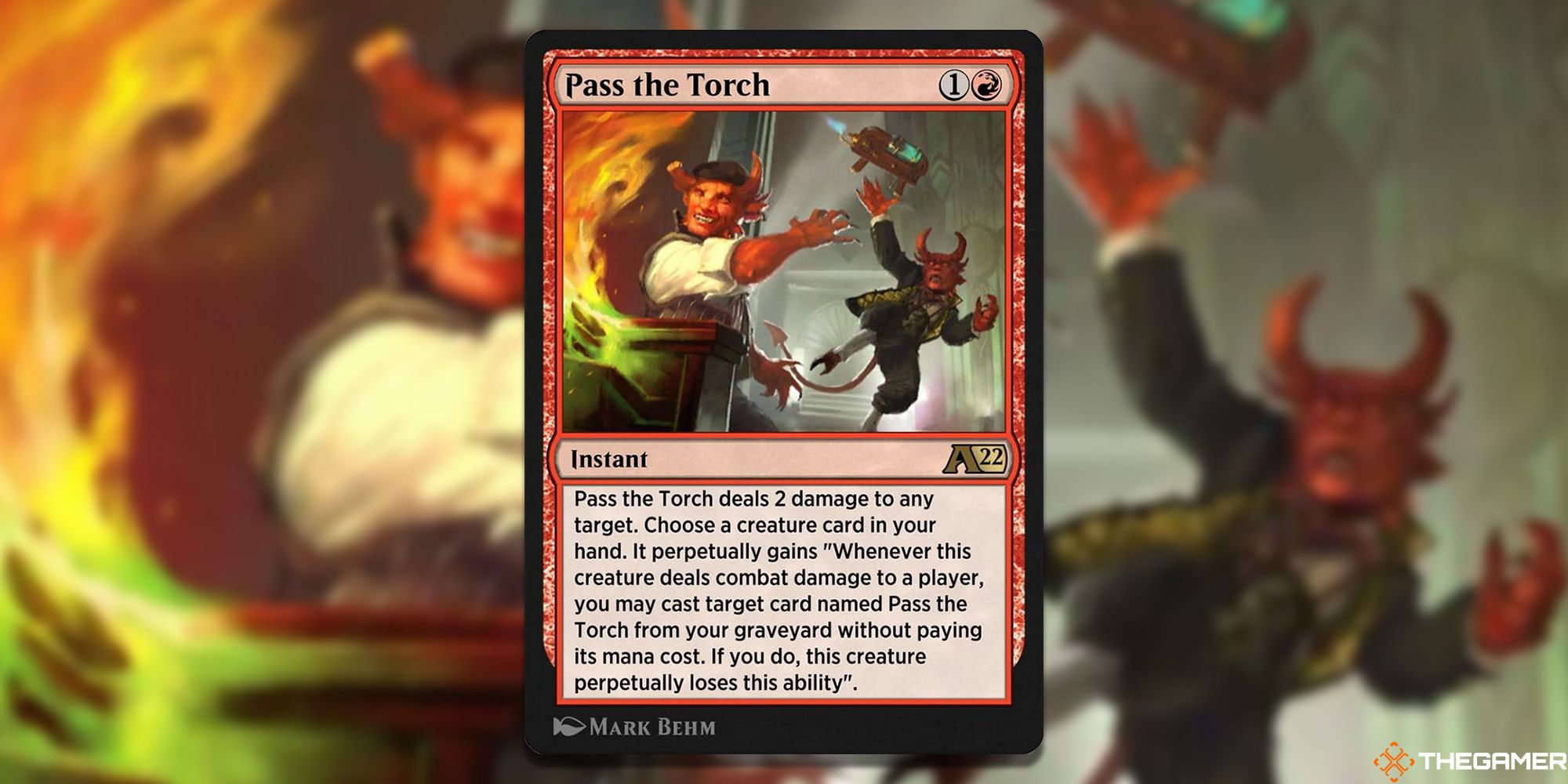 Any red mage worth their weight should be excited about the printing of Pass the Torch as it provides a repeatable source of burn as well as an incentive to slot more hasty creatures into your decks. In a pinch, this instant can also function as removal in case your opponent presents a pesky blocker.

Thanks to the blitz mechanic, there's no shortage of hasty creatures available for play at the moment which should make triggering this card's recast ability a tad easier. The ceiling is very high on Pass the Torch, seeing that as long as you have a creature in your hand, there's no limit to how many times you might be able to cast the spell again. 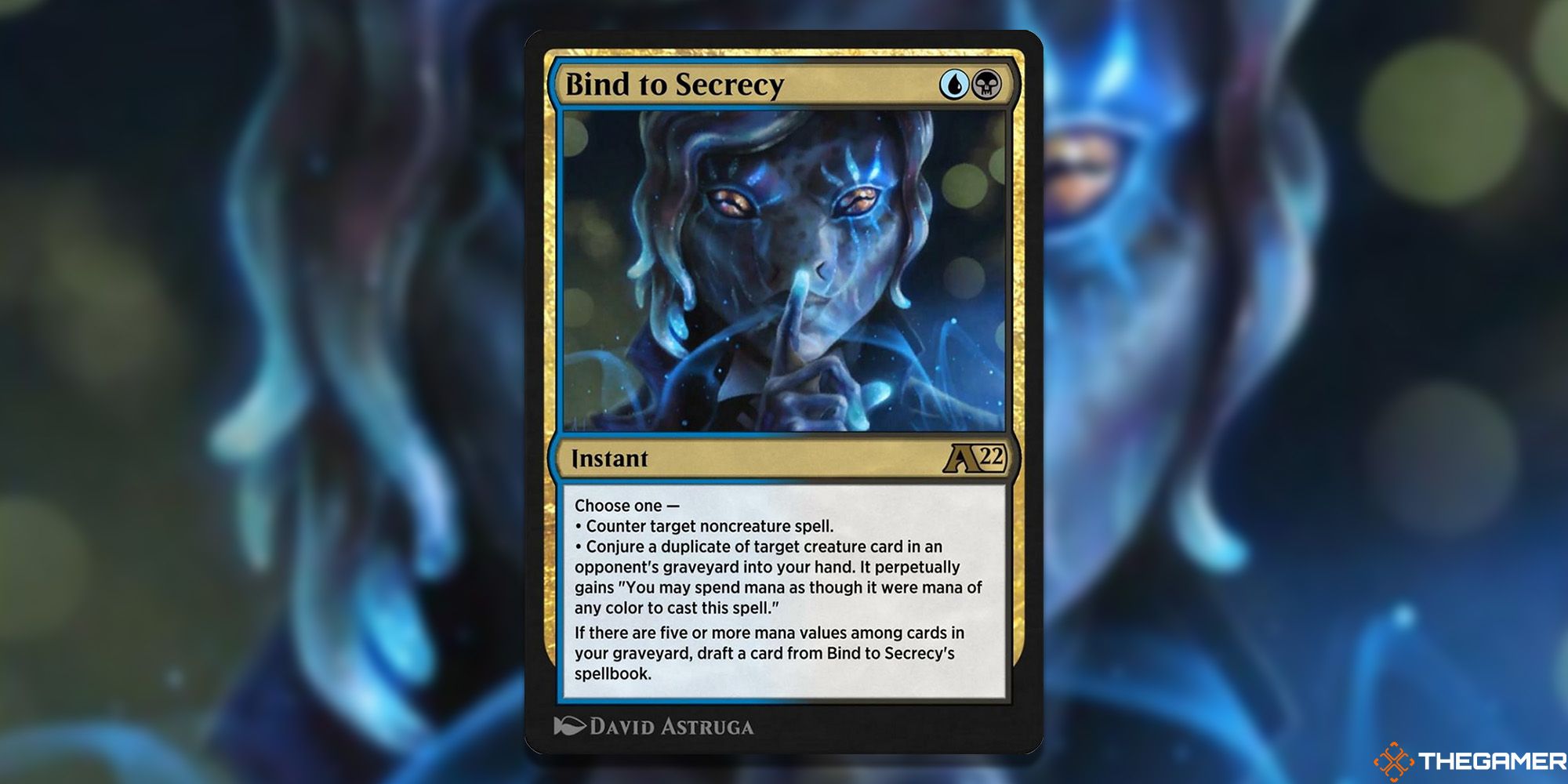 As long as you're playing UB, this is usually a strictly better Negate. Countering a noncreature spell for two mana has long been an effect that control players include in their sideboard – and sometimes even the main.

Stapling the ability to trade your Negate for the most powerful creature in your opponent's graveyard makes this effect much more mainboardable, and that's without mentioning that sometimes you get to draft an additional card from Bind To Secrecy's spellbook. Looking at the spellbook more closely, it appears that this card is trying to incentivize a Reanimator strategy. 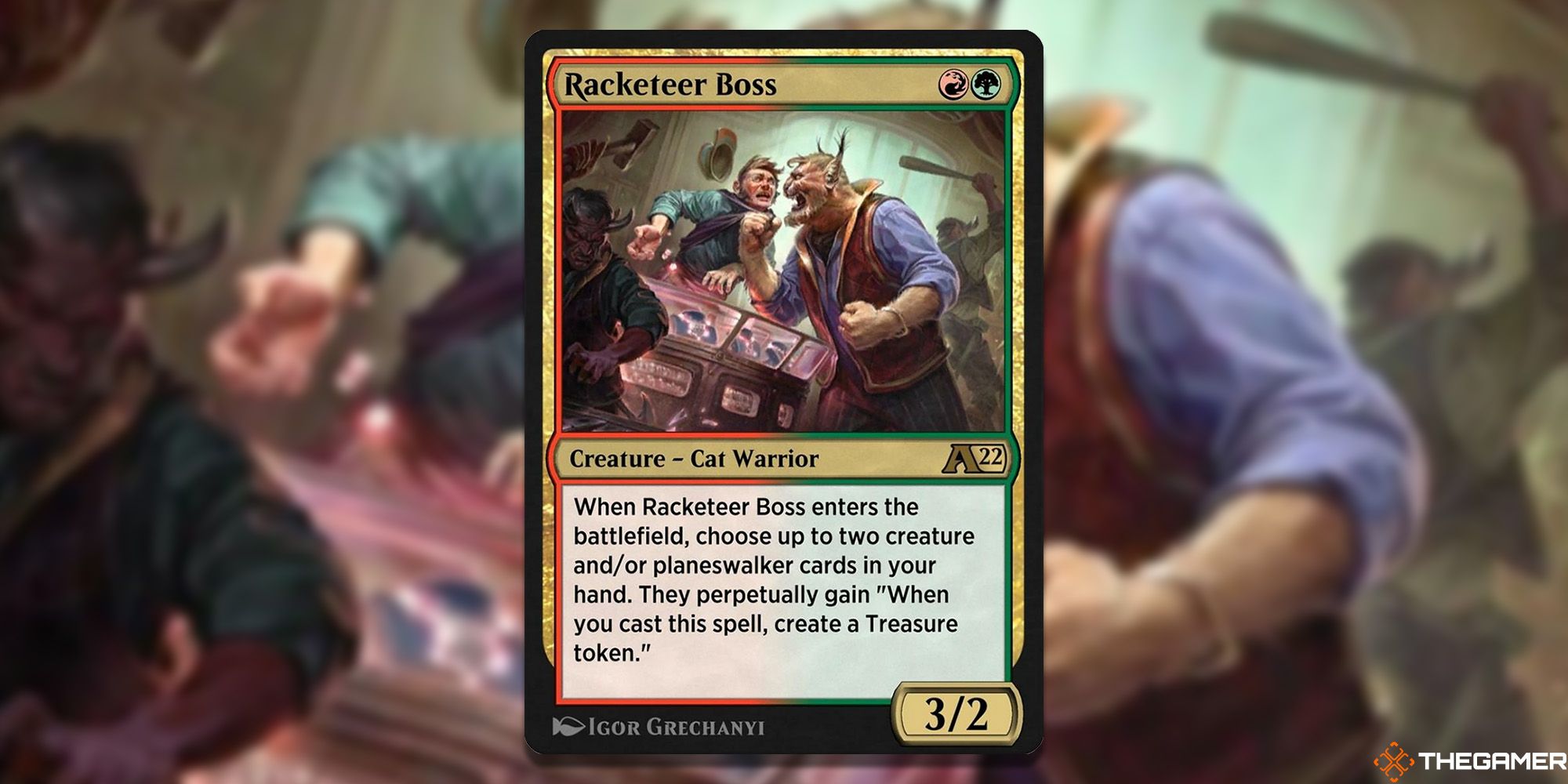 If professional Magic play has taught us anything, it's that treasure tokens are as valuable as gold. Therefore, it should come as no surprise that an aggressively statted two drop that rewards you with treasures for simply curving out is a good card. Using Racketeer Boss, you will have extra mana available for two turns in a row should you follow it up with creatures or planeswalkers it modified.

Alternatively, these extra treasure tokens can be saved and used later to ramp out a big creature like Titan of Industry or double spell a creature alongside removal to keep the pressure on your opponent. 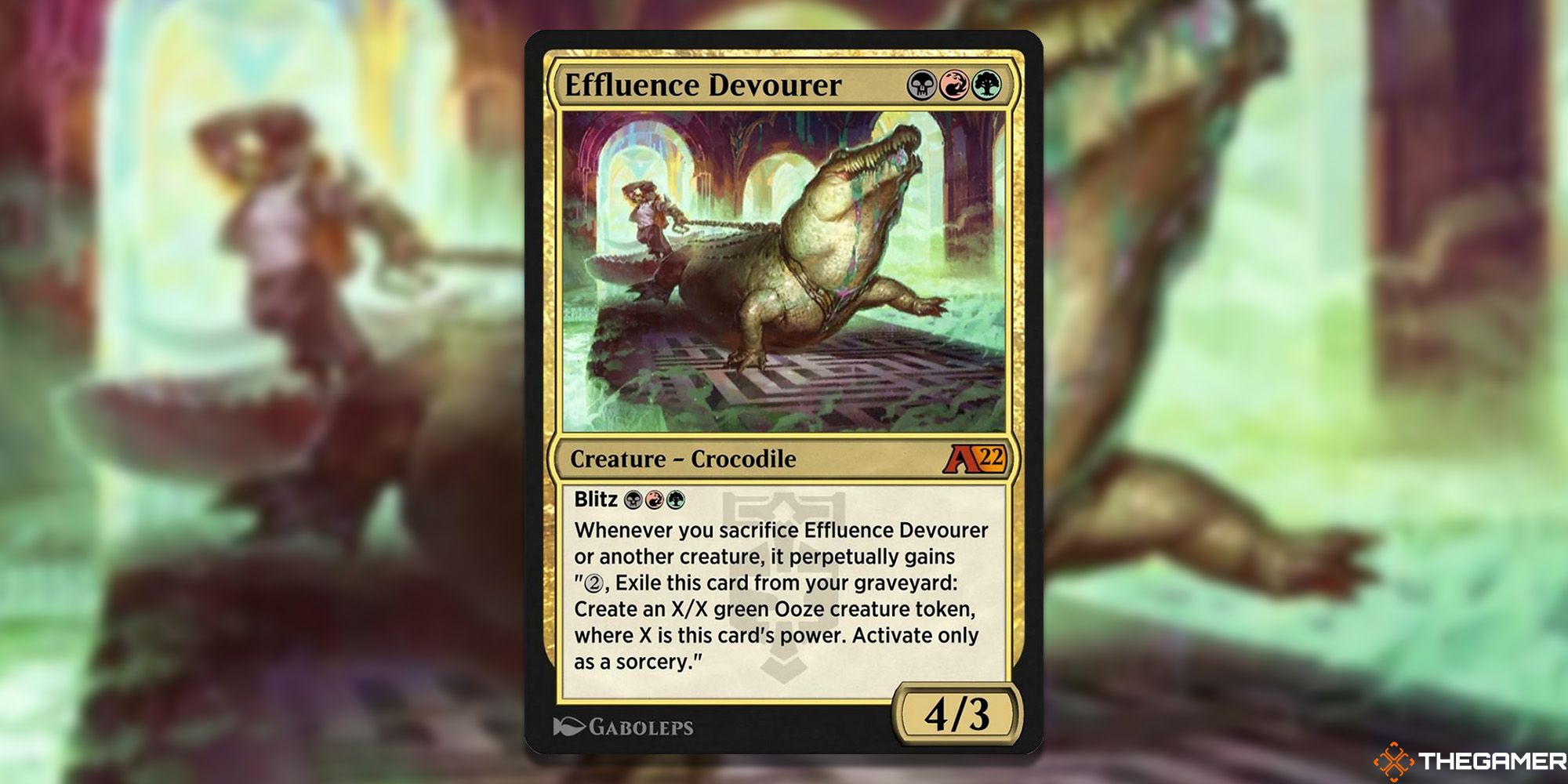 Speaking of incentives for playing blitz cards, it doesn't get much better than Effluence Devourer. This craven Crocodile allows any card you sacrifice to be exiled from your graveyard for two mana. Then, you get to create an Ooze token with power and toughness equal to the exiled card's power.

Besides the obvious use of the blitz mechanic alongside Effluence Devourer, you could also try this croc in a more midrange or control shell that made use of sacrifice effects like Deadly Dispute and Village Rites. The obvious downfall here is going up against graveyard hate effects, but an aggressive deck featuring Effluence Devourer likely won't provide opponents with many opportunities to cast such effects as they try to prevent you from reducing their life points to zero first. 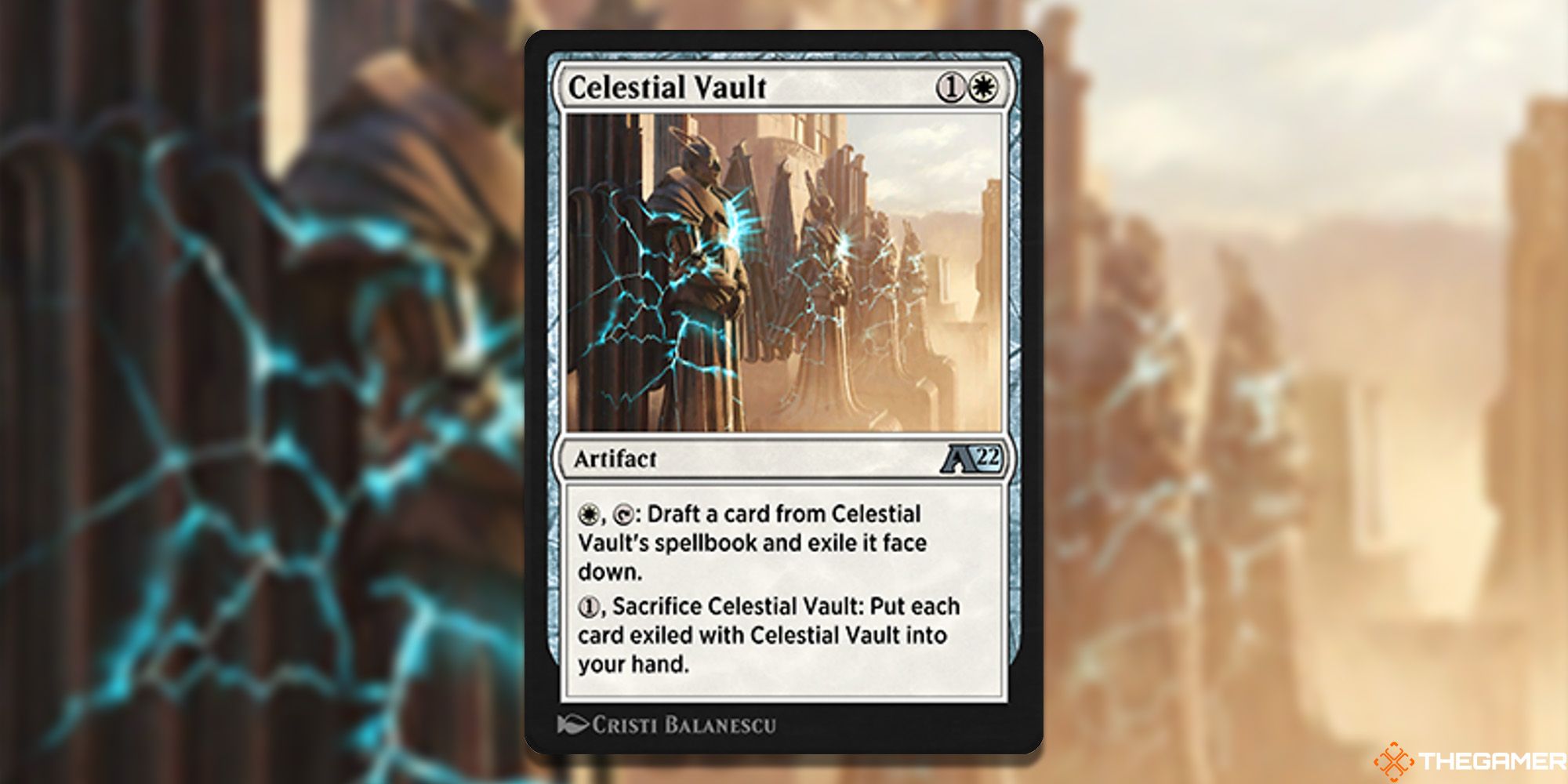 Ever since Giada, Font of Hope was spoiled during the Streets of New Capenna spoiler season, players have been chomping at the bit to create a successful Angels tribal deck. While Angels have seen some amount of success in Standard, the deck is a far cry from a tier one contender. One reason for this is the deck's inability to fight against proper control strategies, as it has no way to keep the gas coming.

That's where Celestial Vault comes into play. Looking at this card's spellbook, it's full of all of the best Angels from recent Standard, including Angel of Invention, Angel of Sanctions, Resplendent Angel, and more. If it comes down early enough, Celestial Vault can provide another entire hand of powerful Angel cards that your opponent will likely be forced to answer. 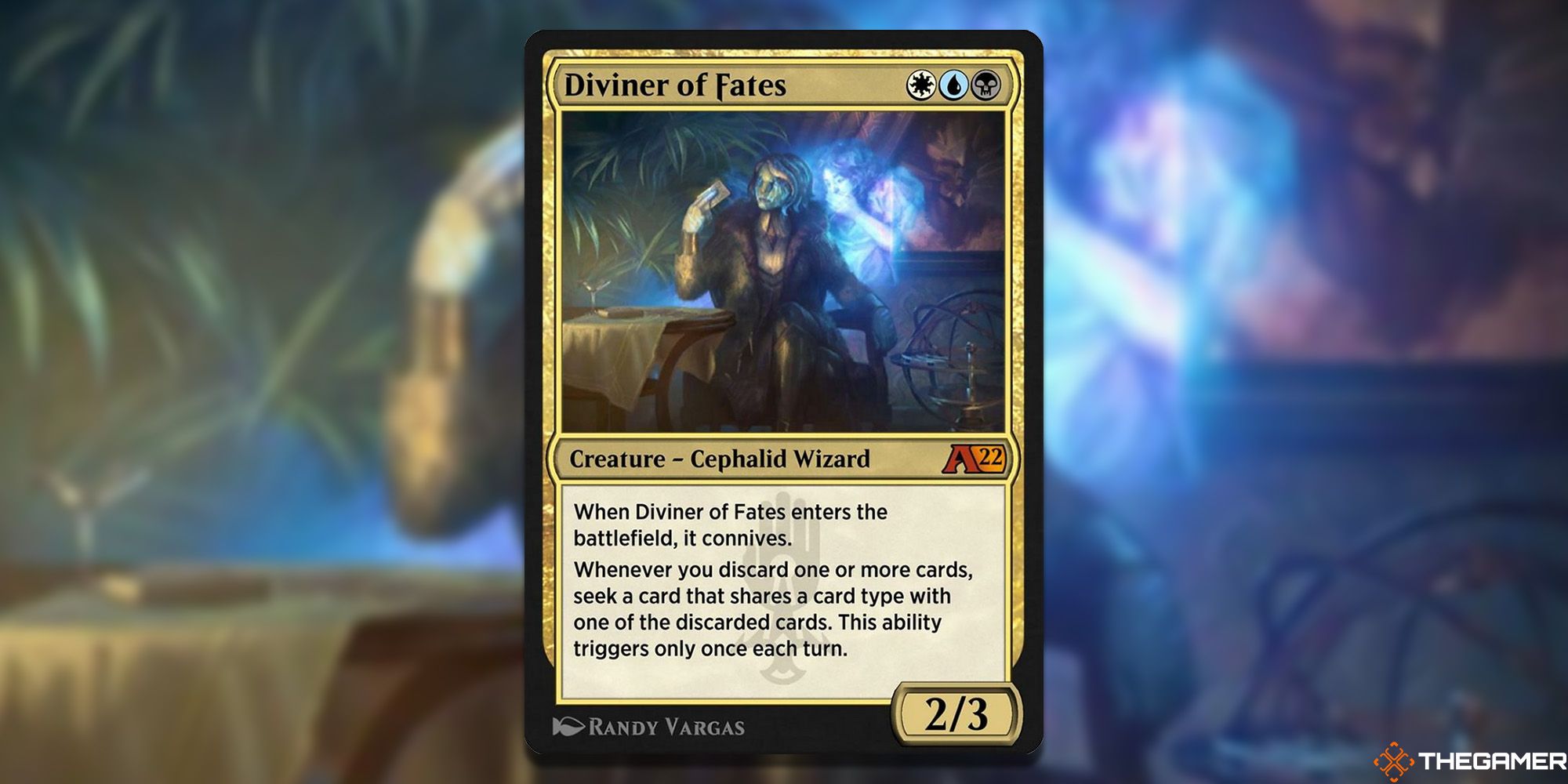 Diviner of Fates is a great Esper card that makes the already good connive mechanic into something absolutely bonkers. While you have this Cephalid on the battlefield, each time you discard a card, you get to seek your library for a card that shares a card type with it and add it to your hand.

Since Diviner of Fates connives on its own, it can trigger its ability the very turn it comes down. Furthermore, it's incredibly well statted for its cost as once a permanent is discarded to its connive ability, it becomes a 3/4 for three CMC. Really, what's not to like here? 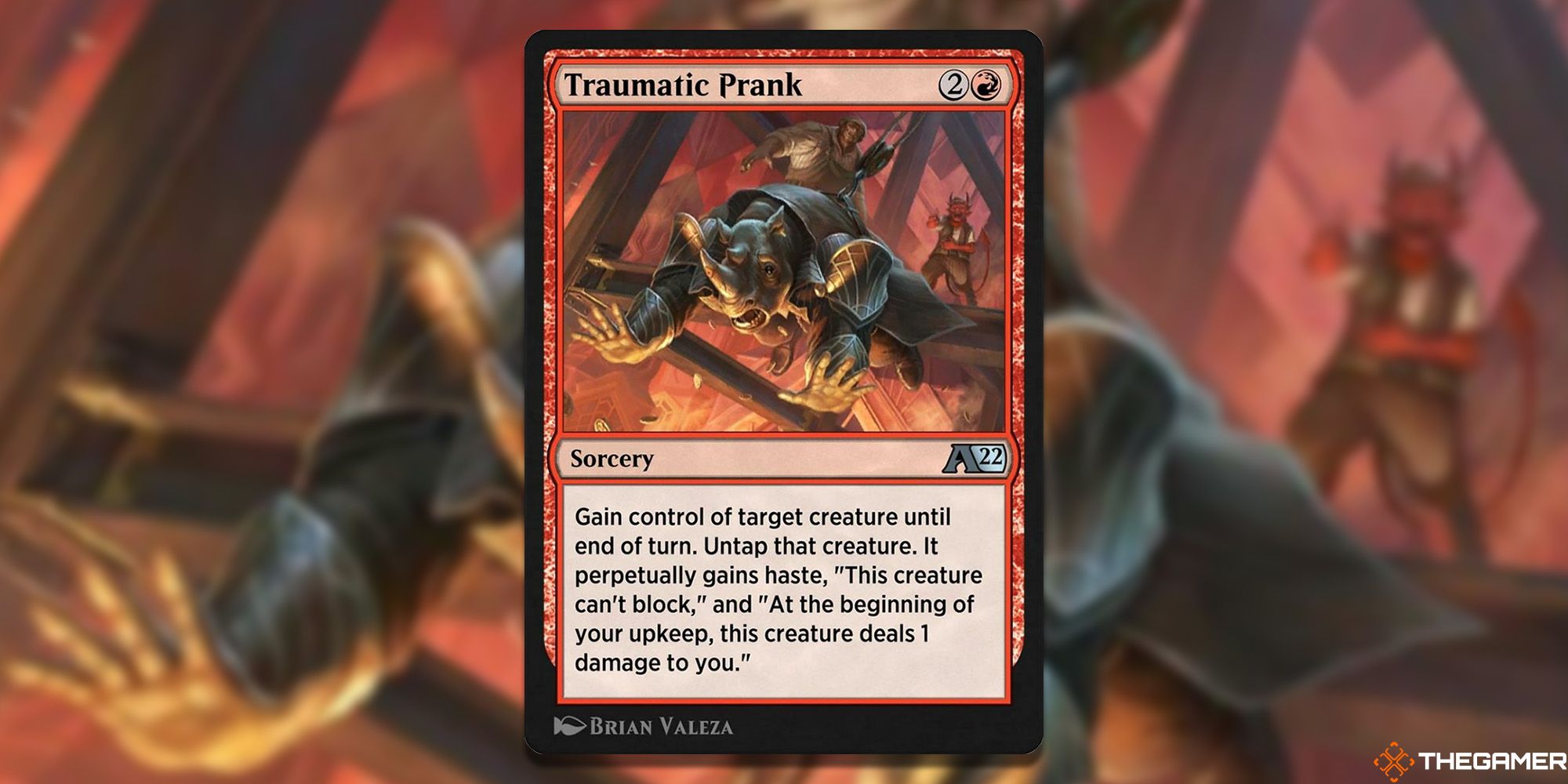 While Pass the Torch is an exciting card for red mages, Traumatic Prank is like the Alchemy format just decided Mono-Red aggro needed to enter tier one of the meta. This is a strictly better Act of Treason that not only provides you with an opportunity to punish your opponent for playing a big blocker but also effectively removes that creature from blocking in future turns and turns it into a possible win condition for you.

All things considered, this card seems too good to be true in its current form. Don't be surprised if it sees some changes in the near future, but, for now, you may as well make pranks while the trauma's severe. 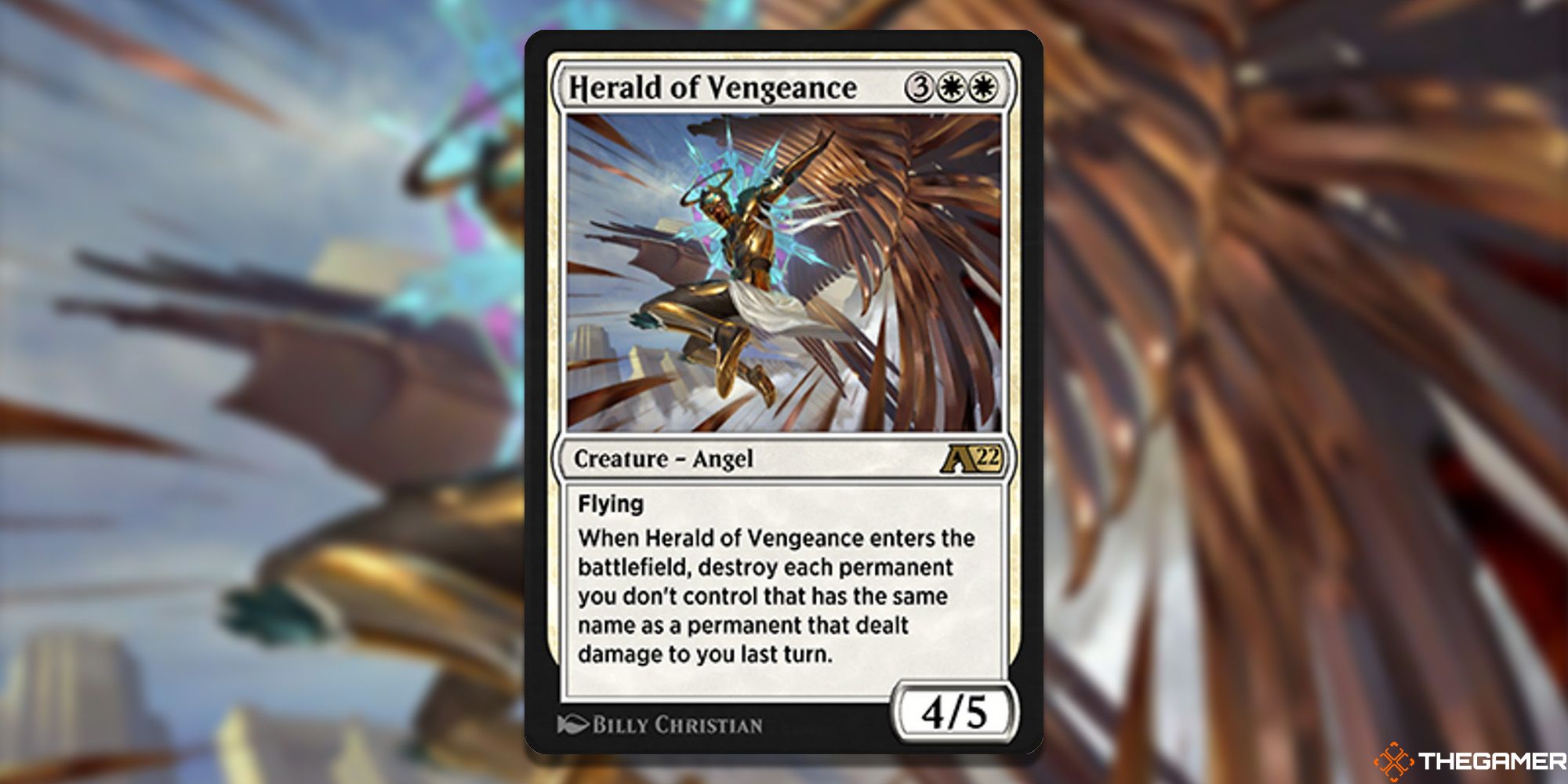 The larger reason why Alchemy is the best place to play Angel tribal at the moment is Herald of Vengeance. This powerful threat keeps the midrange pressure on your opponents while possibly deleting their entire board. Simply the existence of this card in Angel decks will have smart opponents refusing to swing all out with their creatures which will work to your benefit.

Additionally, the fact that Herald of Vengeance will usually remove at least one creature on your opponent's side of the battlefield makes it invaluable. More likely than not, the creature in question will also be one of your opponent's larger threats as it needs to have been able to successfully attack through your blockers in the first place. 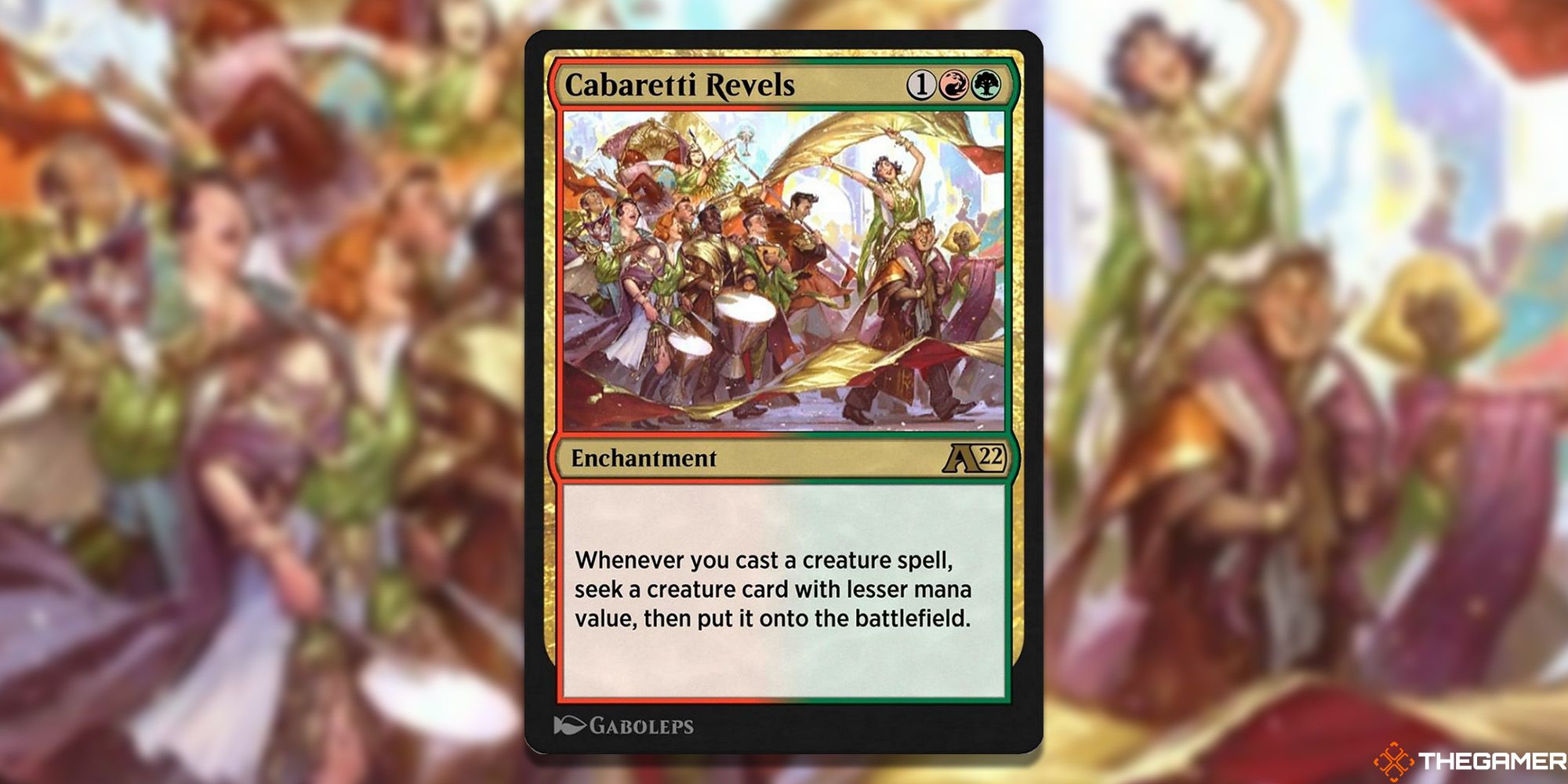 How could it get any better than a card that increases Angel tribal's viability? Cabaretti Revels provides an entirely new deck strategy to Alchemy with its incredibly powerful effect to bring creature cards from your library directly onto the battlefield. This trigger is best put to use alongside creatures that benefit from other creatures entering the battlefield such as the aforementioned Gala Greeters.

While Cabaretti Revels is very difficult to beat once it starts getting triggers, it is susceptible to enchantment removal. Consequently, any Cabaretti Revels deck might be best placed in best-of-one matches once players start to arm their sideboards with the right tools.