With a roster of over 150 playable champions, only an abysmal percentage are children of the rainbow. Due to a lot of pushback from the higher echelons of Riot Games and fear of backlash from a small percentage of the community that plays League Of Legends, Riot has released very few openly gay or gender non-conforming champions.

The hidden splashes of color endure and are revealed through special interactions between certain champions, for although some details may have been cut from the champions' final release, little gay nuggets of these hidden facets of their personalities persist and are explored through other platforms from Riot Games.

10 Evelynn – You Know You Want Her 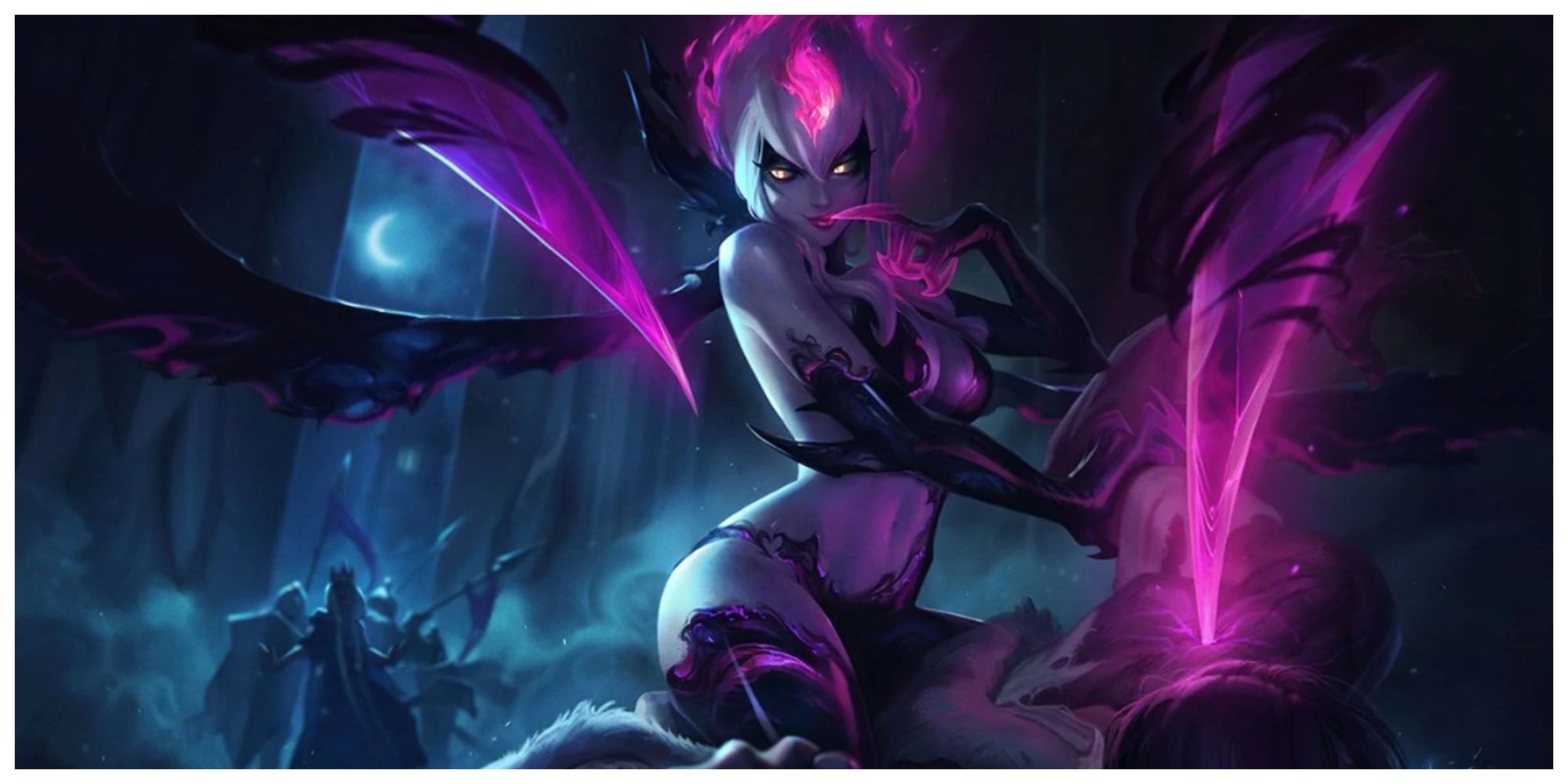 Agony’s Embrace is a primordial demon and therefore agender, as all the demons are. However, her main persona is that of a seductress named Evelynn. Being that she is a creature that feeds on the pain of others, she honed her hunting technique by donning a visage her prey would find the most attractive to bring them to the heights of ecstasy, only to then make them fall into vast wells of anguish with torture.

9 Fiora – She Longs For A Worthy Opponent 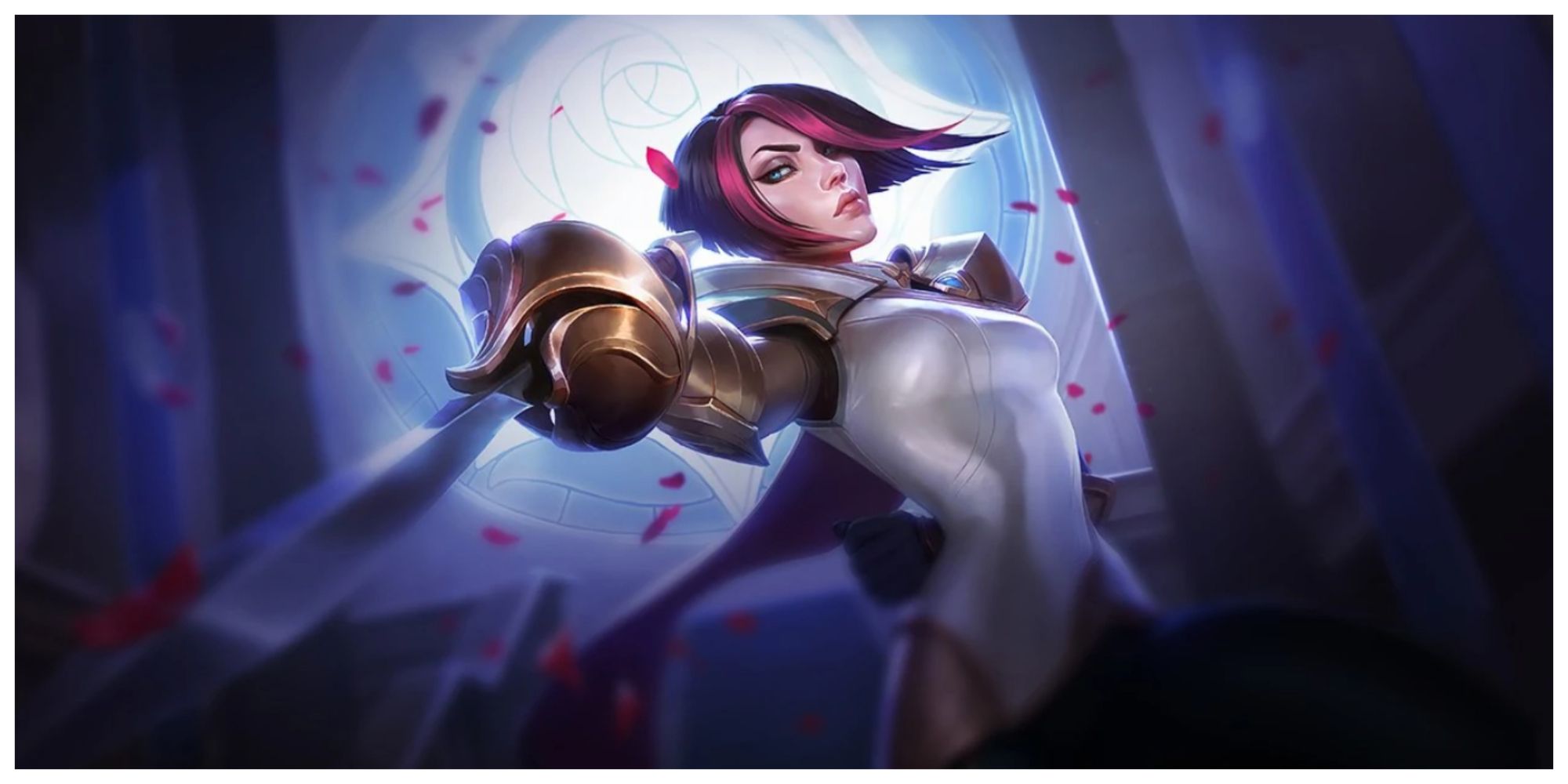 Perhaps a surprise to some, The Grand Duelist is implied to be lesbian due to a special interaction voice line from Swain after he collects a soul fragment from her with his Vision of Empire ability. He states, “She spurned so many suitors… A wonder they did not see why.”

The Noxian Grand General can hear the whispers of secrets in a person’s soul thanks to the demon, Raum, that fused with him. The demon feeds on secrets, so we can reliably believe Fiora is not heterosexual as she apparently rejected many men, and no one could understand why until Swain put it into perspective. 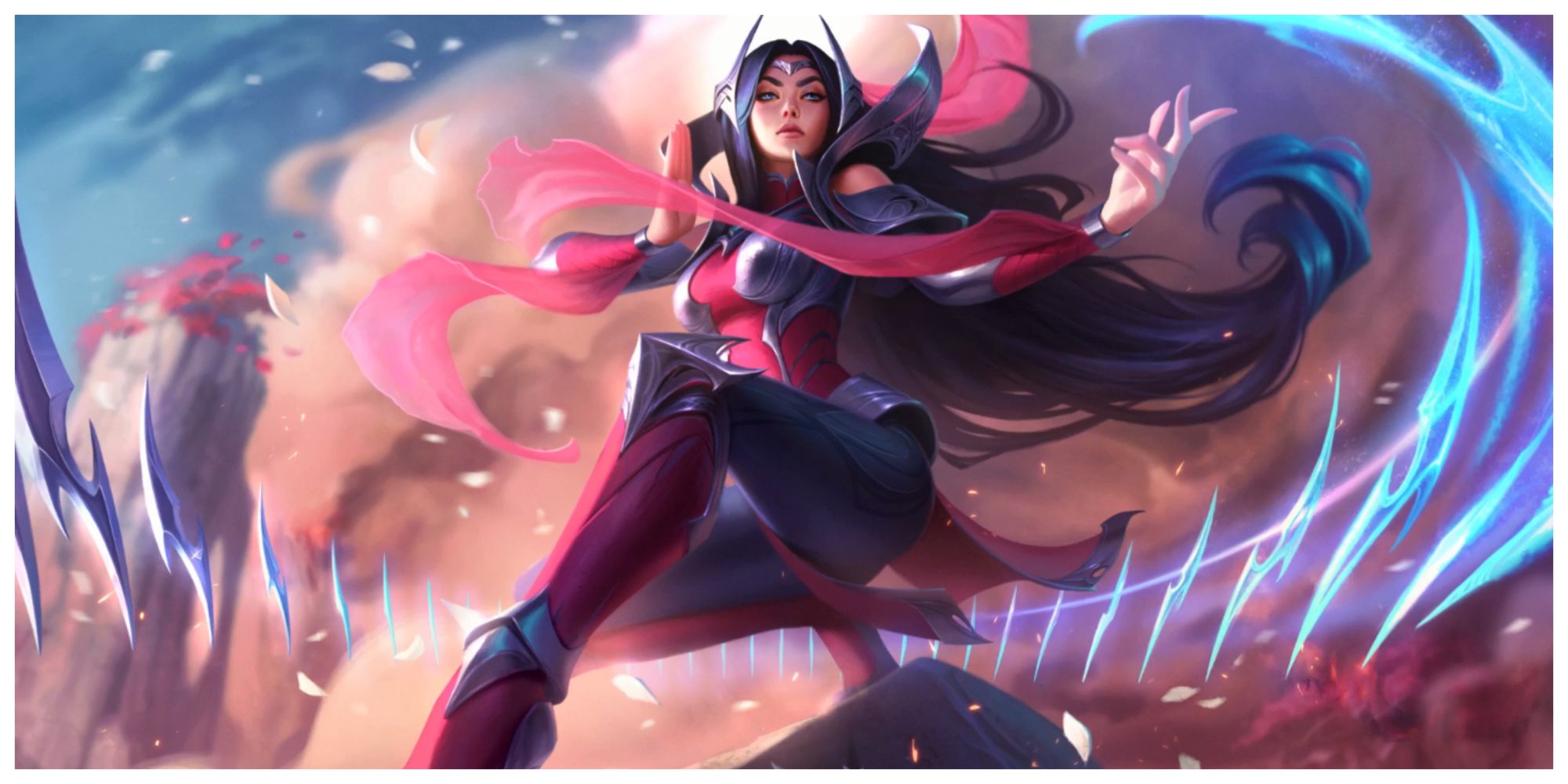 According to updates in the lore of Legends of Runeterra (which is canon to the League of Legends universe), Irelia may be in a relationship or bond with someone known as The Blossoming Blade, who was originally intended to be named Lyanna. When Irelia’s and Blossoming Blade’s cards interact with each other they have some wholesome voice lines.

Lyanna says, “Our enemies approach. M-my hands are shaking…” and in response, Irelia says, “Then hold on to mine. We’ll face them together.” In another interaction, Lyanna asks, “What terrors must we face out here?” Reassuringly and affectionately, Irelia responds, “Whatever they are we will face them together, little blossom.” 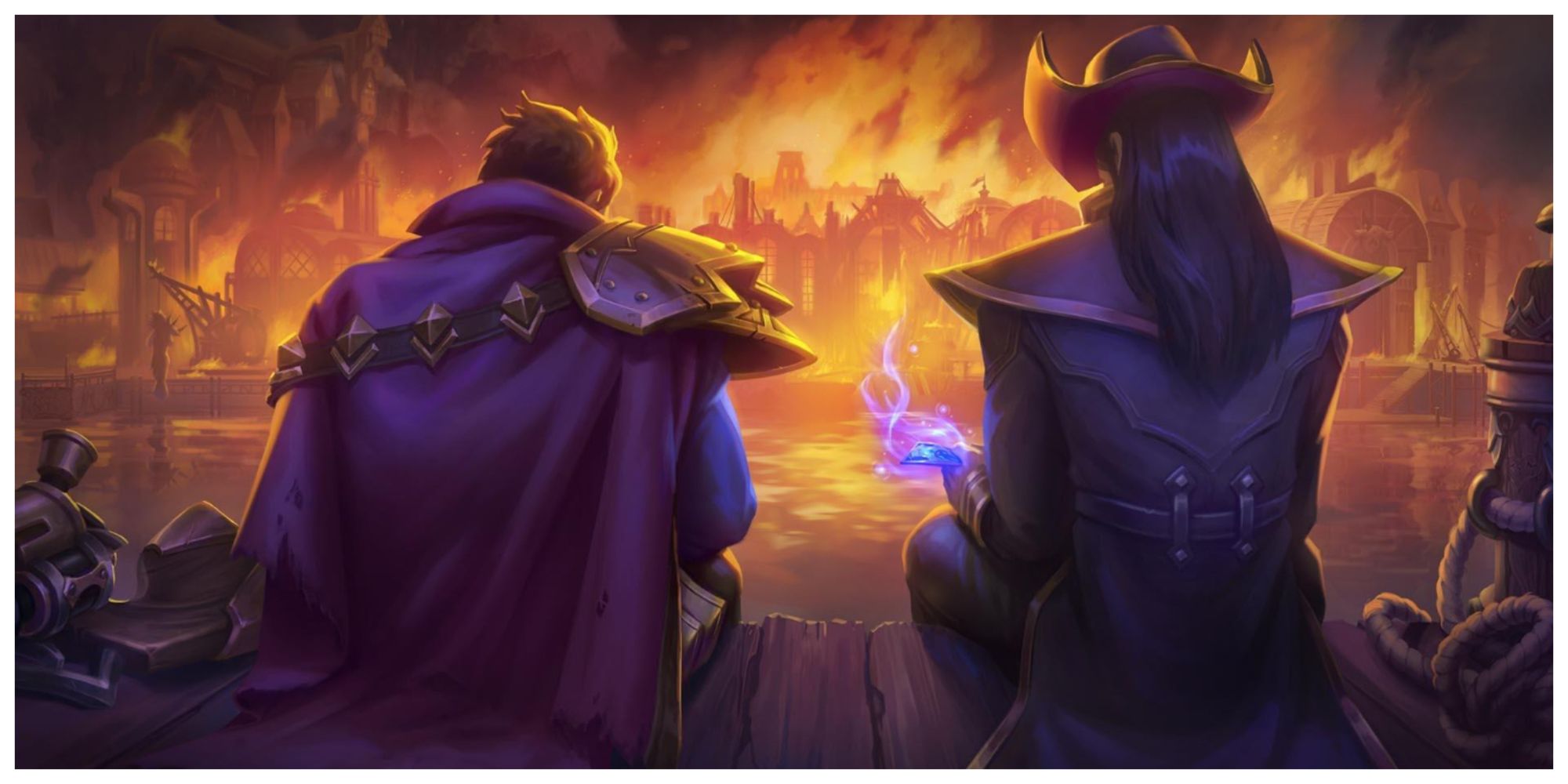 This duo was years in the making after all the heists, bloodshed, betrayal, and reconciliation they’ve been through together. Graves is confirmed to have been gay for at least 40 years, and although he and Twisted Fate may not openly acknowledge their feelings for each other (most likely because they don’t want the other to think they’re going soft), their dynamic of bickering is similar to an old, married couple.

The Pride 2022 event along with their new story The Boys and Bombolini has seen them fully actualized as an irrevocable canon pair – unless they break up again. 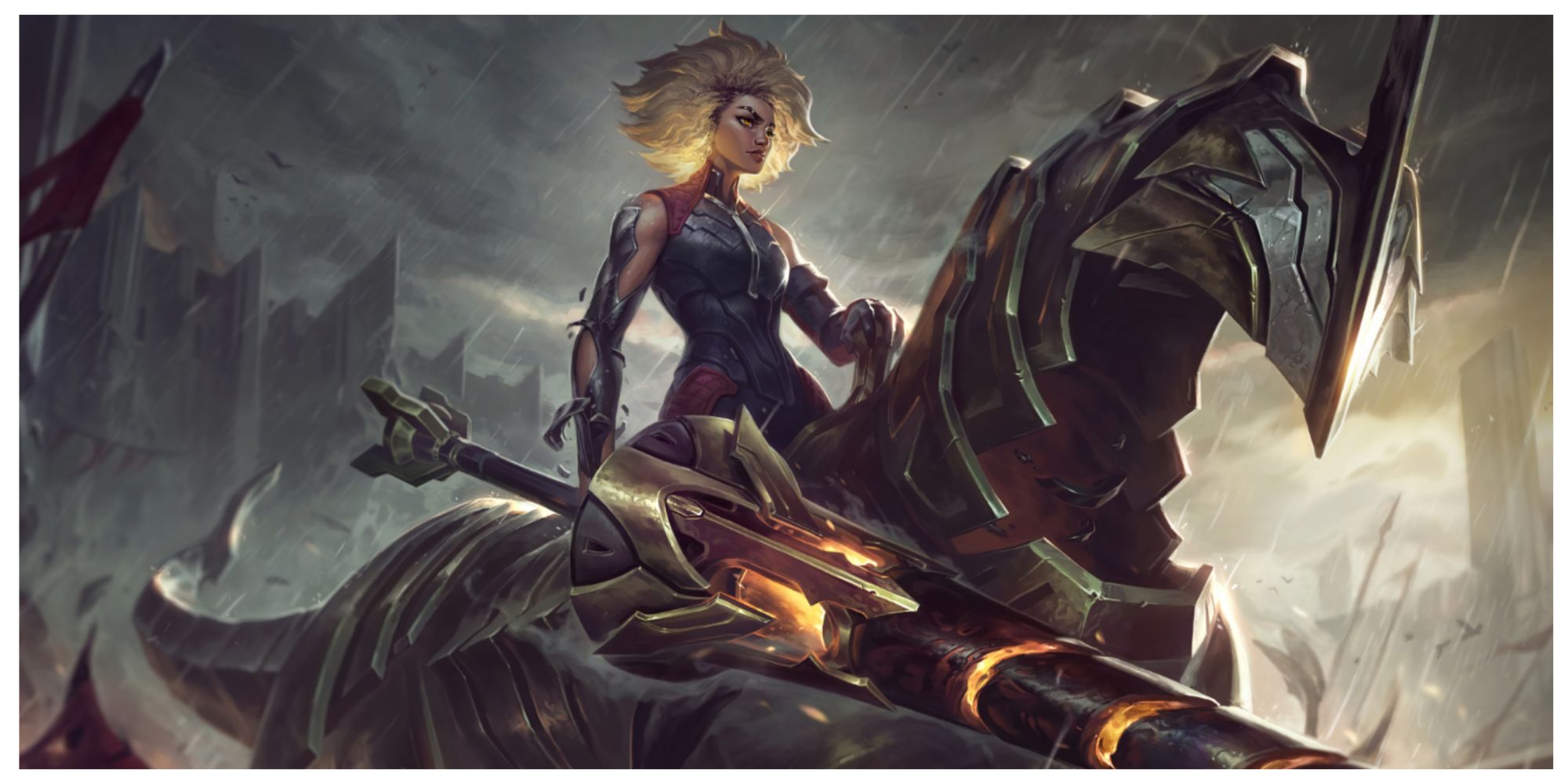 Based on The Iron maiden’s voice lines, we can surmise she is bisexual. When she first encounters Leona, she says to herself, “All right, Rell. Be cool. It’s just a tall, super-strong armored lady.” Upon killing Leona Rell then says, “Ugh, I hope this won’t hurt my chances.” It wouldn’t matter either way though because Leona’s heart is with Diana.

When she encounters Sett, The Boss, she says, “More like the boss of having his shirt off… Ohhh I think he heard that,” saying the last part with palpable chagrin. Finally, when encountering The Starry-Eyed Songstress, Seraphine, Rell awkwardly says, “You’re cute Seraphine. Uh, well, bye.” Hang in there Rell, you’ll figure out how to talk to the ladies one day.

5 Varus – The Guilty Will Know Agony 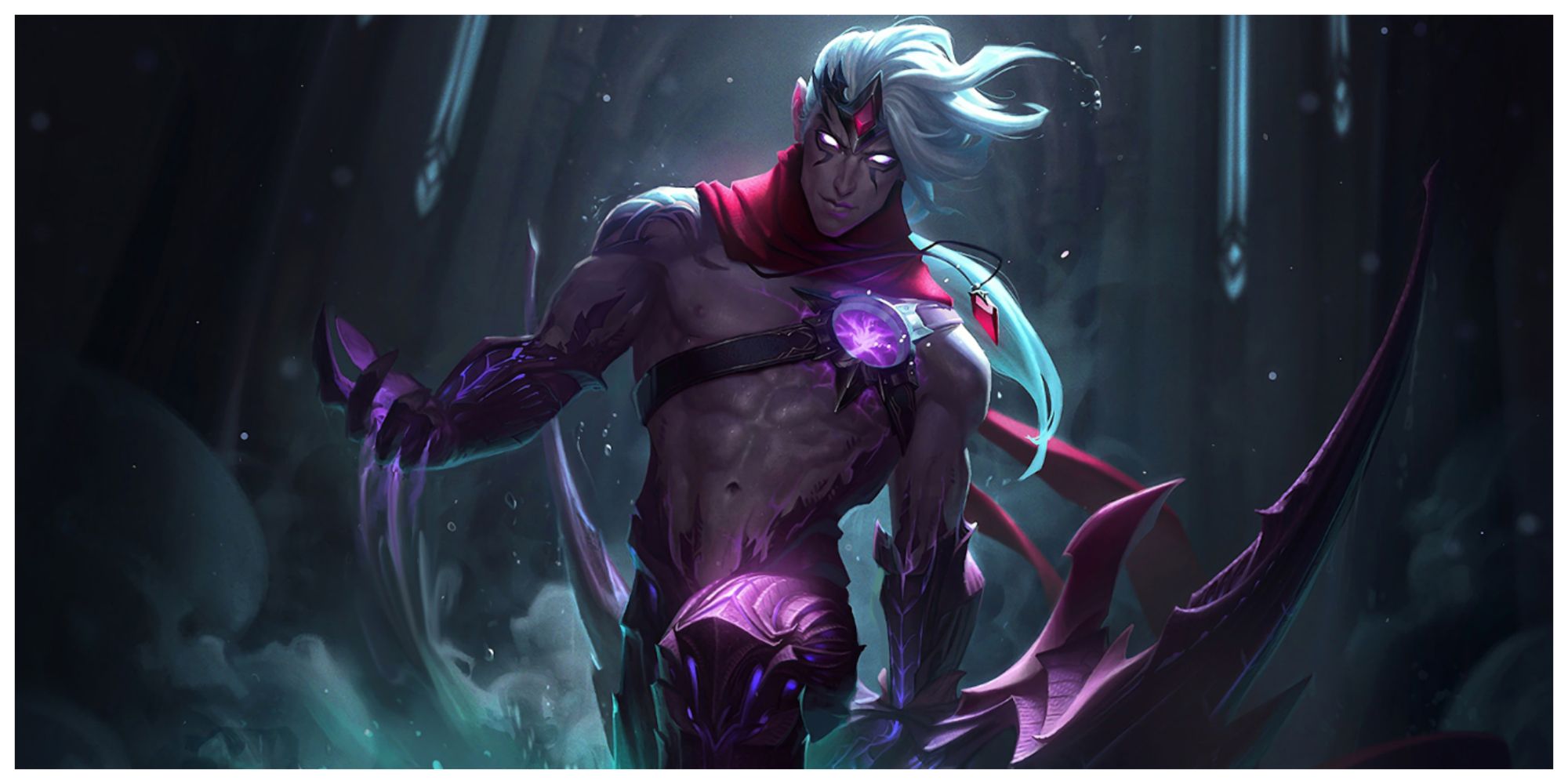 Varus, a Shriman archer that Ascended but then fell to the status of Darkin due to PTSD from the Icathian war, was bound to his bow. A queen of Ionia wielded Varus, aware that Darkin armaments can consume the user, to protect her home. She then cast herself into a lightless well and there Varus remained imprisoned for about 1,000 years. When the Noxians invaded Ionia, two hunters named Valmar and Kai who were “heartlights” (lovers, essentially) defended the temple, though Kai was mortally wounded.

Hearing that the well could “renew that which is broken,” Valmar took Kai to the well Varus was sealed in and jumped in with him, the two fusing to become the new body for Varus who emerged from the well. Some people in the community joke that Varus is two-thirds gay because he is an entity comprised of three different beings. Neeko even asks Varus, “How do three people wear one pants?” when she transforms into him. 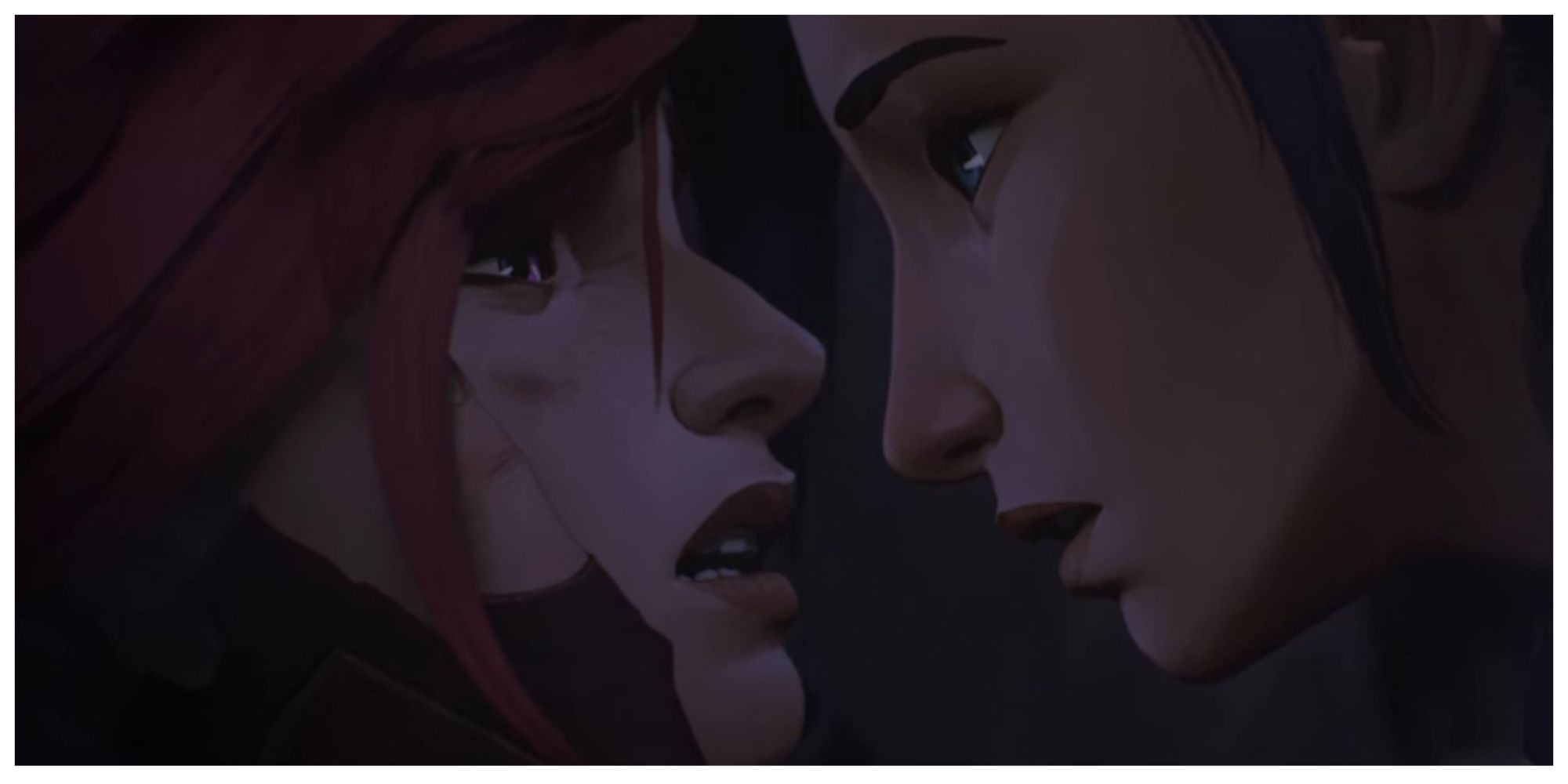 Originally born in the opposite sister cities Piltover and Zaun, an irrevocable series of events hurtled them towards each other. Their relationship was made canon by Riot Games’ hit Netflix series, Arcane, which deepened the lore behind these two and the cast of champions present in the show.

When Vi and Caitlyn teamed up to sleuth some information in a brothel, Vi said very plainly to Caitlyn, “You’re hot cupcake.” In-game, however, Vi referred to Caitlyn as cupcake, long before the series ever saw the light of day and was still in development.

3 Leona & Diana – When The Sun And Moon Align 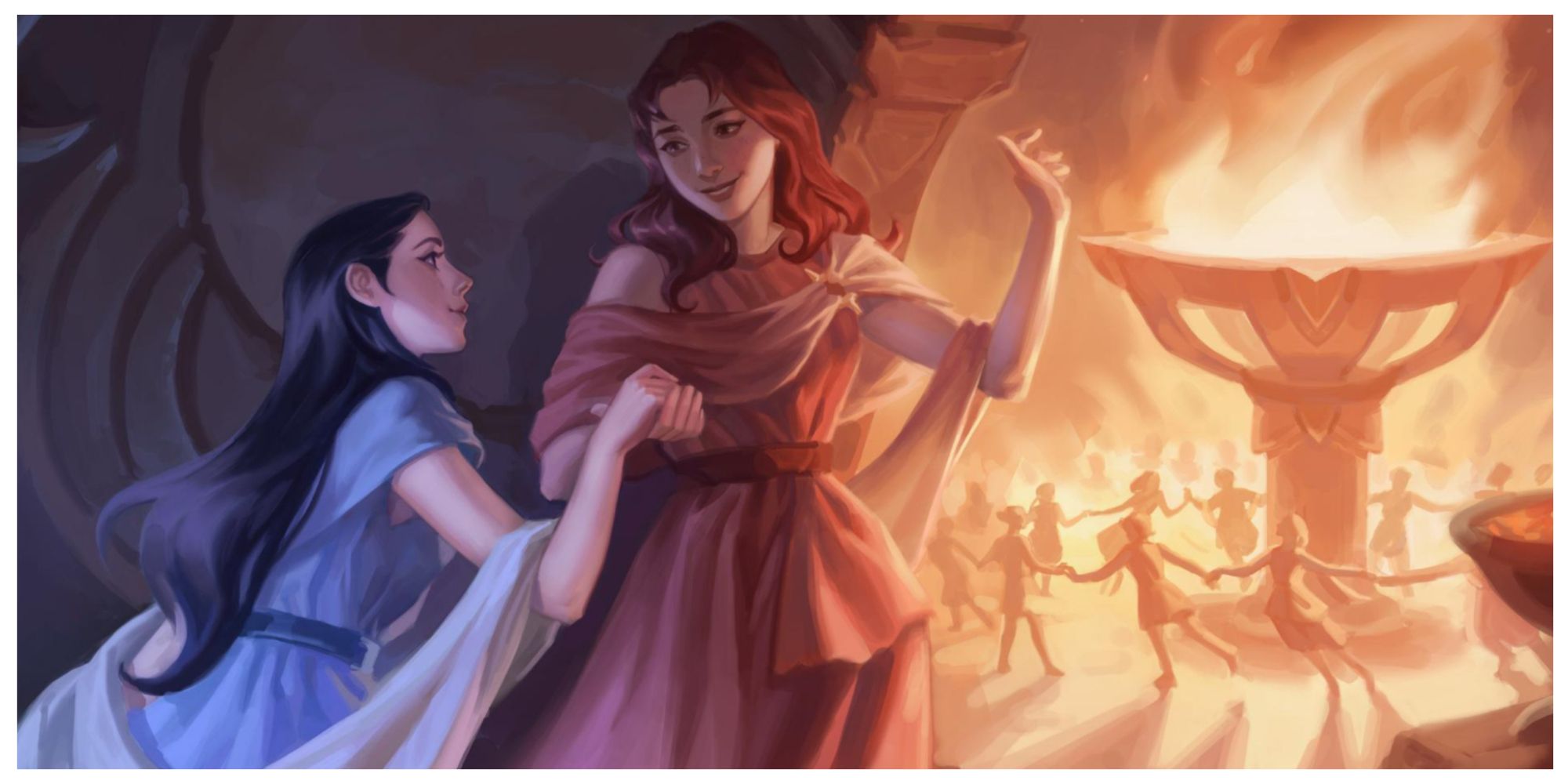 The Radiant Dawn and Scorn of the Moon both began their relationship when they were acolytes studying together at a Solari temple on Mount Targon.

Leona was a devout worshipper of the sun and the top of her class, while Diana was ostracized for thinking critically and asking questions that were deemed heretical, finding more solace in the light of the moon. Wanting to get better at their oration class and debates, Leona sought help from Diana to tutor her, since she felt Diana had a sharp and logical mind.

The festival of the Nightless Eve was coming up, and although six people asked her to attend with them, Leona declined as she wanted to go with Diana but didn’t know how to ask. Not wanting to attend the festival, Diana instead climbed up a mountain to bask in the moonlight and watch the festivities from afar. Following her, Leona searched for Diana until she came upon her and the two sat to enjoy each other’s company, until Diana asked Leona if she wanted to dance with her at the festival.

Leona grinned and beamed with delight saying, “Not yet,” as she kissed Diana and Diana returned the kiss. 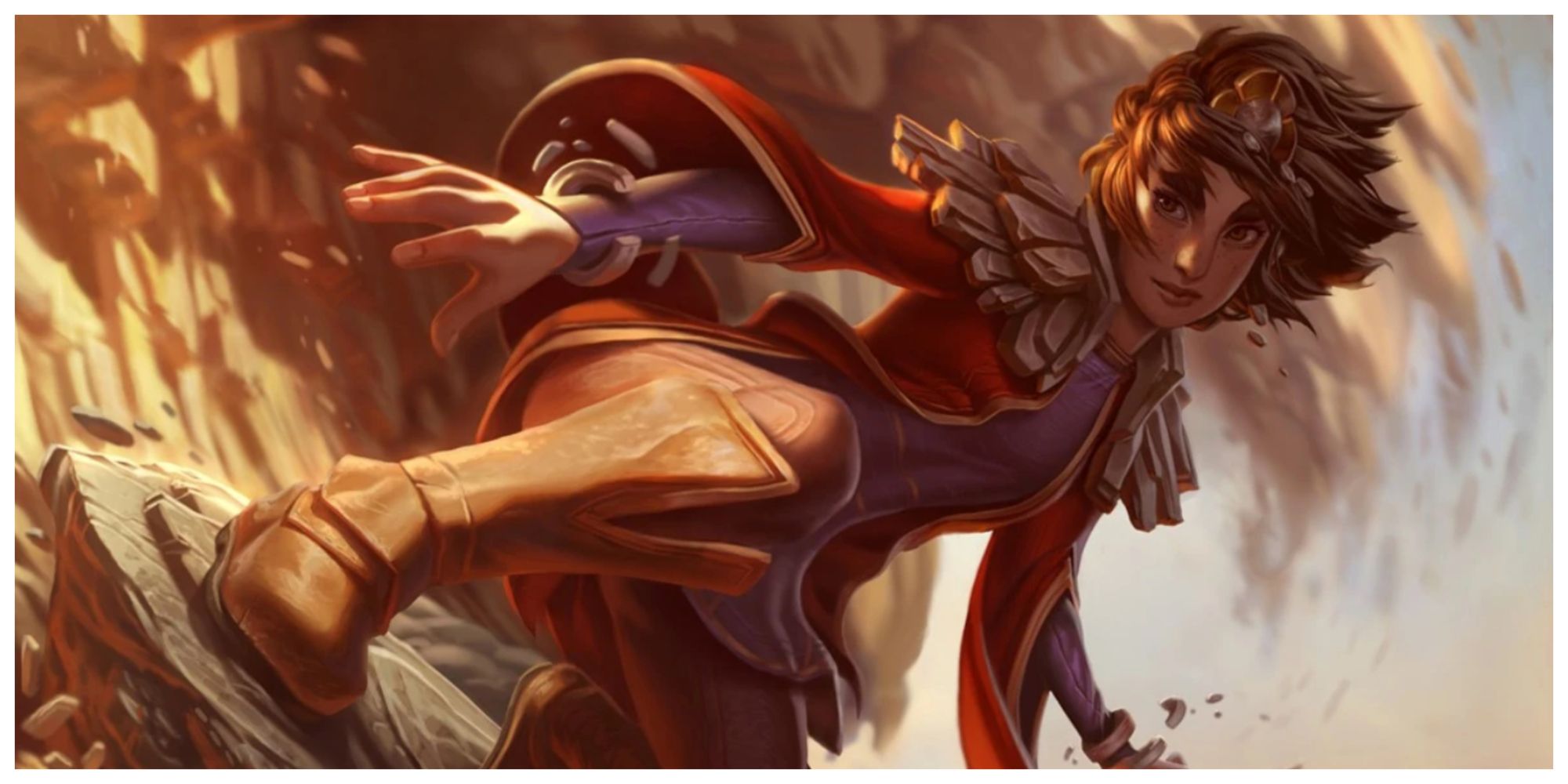 Apparently, when The Stone Weaver was conceptualized, her designers considered including her identity as a transgender woman, but these details were cut from her release. Although, sometimes Riot has a way of sneaking hints and bits of lore in for the most astute observers to find.

One of the most prevalent hints which can lead players to believe this aspect of Taliyah’s identity is still alive through a voice line from Neeko when she transforms into her saying, “Hmm… Neeko not the only one who changes!” 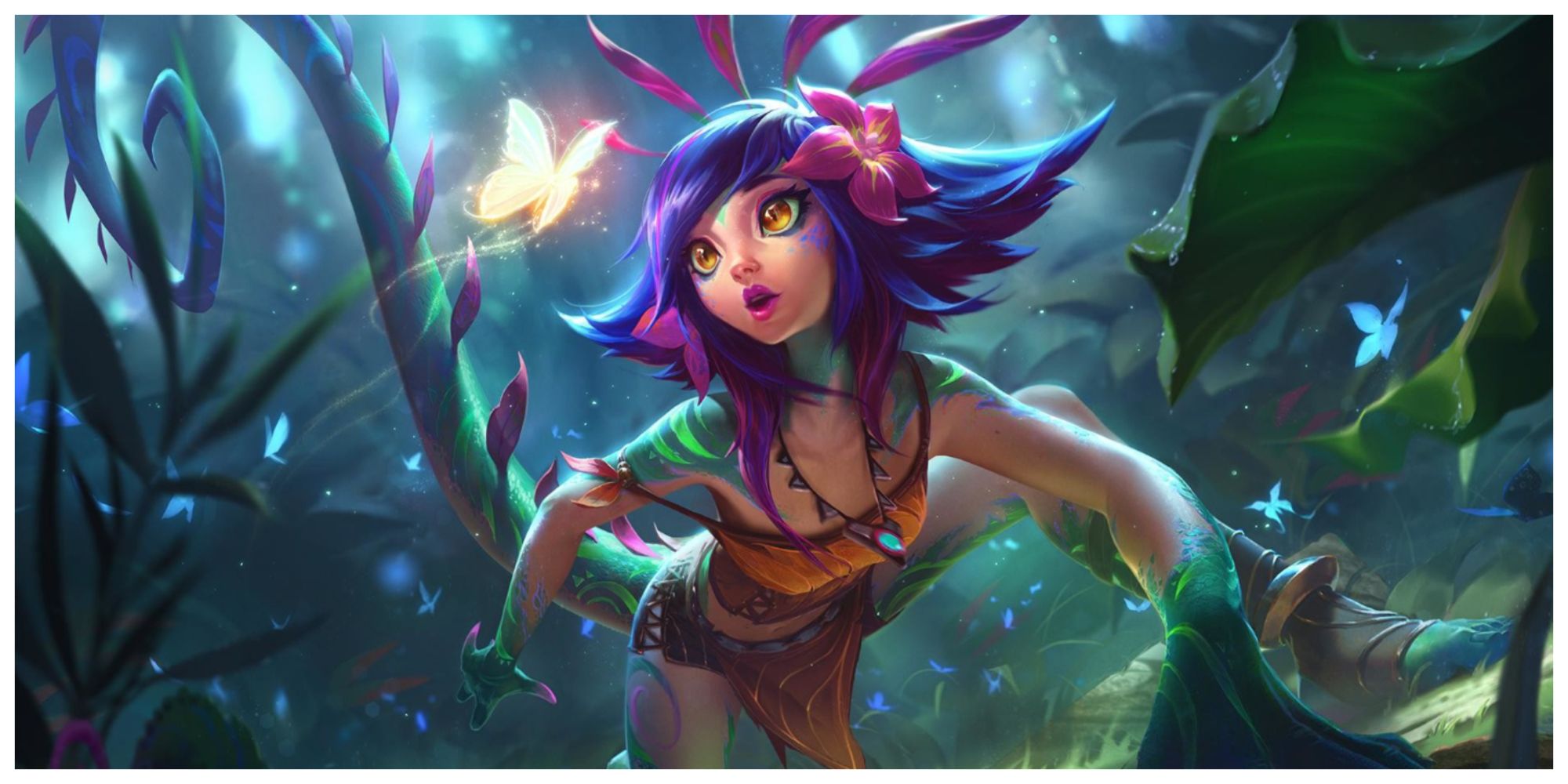 The strong tomato openly identifies as lesbian and we can see this through her numerous voice lines with various female champions. When shapeshifting into Shyvana with her Inherent Glamor passive she says, “Does dragon lady want to eat lunch with Neeko sometime maybe?“ Props to Neeko for shooting her shot.

Another interesting voice line is directed towards Evelynn when The Curious Chameleon transforms into her, “Evelynn is so extreme! Neeko curious…” Careful Neeko, Evelynn does more than bite. When mimicking male champions, Neeko says things like, “Do I smell as bad as I look?” before sniffing herself and declaring a definitive, “Yes.”