Home » News » Is Plastic Taking Over the Ocean? Hard Facts

Is Plastic Taking Over the Ocean? Hard Facts Plastic is everywhere, on our shelves, in our closets, protecting our electronics, and floating in the ocean. Decades ago, plastic was an exciting new alternative to more expensive natural materials like wood or cotton. Yet, today’s opinion of plastic is quickly skewing towards the negative, with pollution posing a severe threat to our planet’s health.

With hundreds of millions of tons of plastic in the ocean already due to illegal dumping, unsafe manufacturing and agricultural practices, and post-consumer waste, the time is now to make a change for the sake of the planet. To make informed choices that promote environmental health and healing, you’ll need to know the hard facts about plastic pollution:

How Much Plastic is in the Ocean

Each year, global manufacturers produce nearly 400 million tons of plastic. In theory, most plastic individuals could recycle but instead end up in a dump on land or in the ocean. Over the last decade, an average of 10 million metric tons of plastic has been dumped into the ocean each year.

The continual negligence of wasting plastic can lead to more plastic than fish (by weight) in the sea by 2050. Thanks to steady demand and increased single-use and disposable products, plastic production has shown no sign of slowing for decades.

How Does Plastic Get into the Ocean

Plastic permeates every part of our lives. Ultimately, meaning there are plenty of opportunities for it to be littered, improperly discarded, mishandled, or even purposefully dumped into the ocean. Some common ways plastic finds its way into lakes, streams, waterways, and eventually, the ocean include:

Cigarettes aren’t just bad for your lungs; they’re bad for the environment. Cigarette butts and filters originate from a plastic called cellulose acetate. Cellulose acetate is theoretically biodegradable but more accurately breaks down slowly – like other plastics – leaving behind harmful residues. In addition to plastic, nicotine, harsh chemicals, heavy metals, and other toxins leach from the used filters into the surrounding water.

Industrial dumping and flagrant disregard for environmental safety aside, massive industrial plastic waste is produced unintentionally. Industrial runoff and leaking account for billions of microplastic pellets entering the oceans each year. Regrettably, unseeable by the naked eye but highly damaging to the health of marine life.

Like large industrial manufacturers, everyday consumers flush microplastics – and even whole plastic products – down the drain and out to the oceans every time they use household appliances. Many, many people throw their plastic contact lenses in the sink or the toilet. Plastic menstrual products are flushed away basically every second. And, microplastics in synthetic clothing are cycled through your plumbing during laundry day. 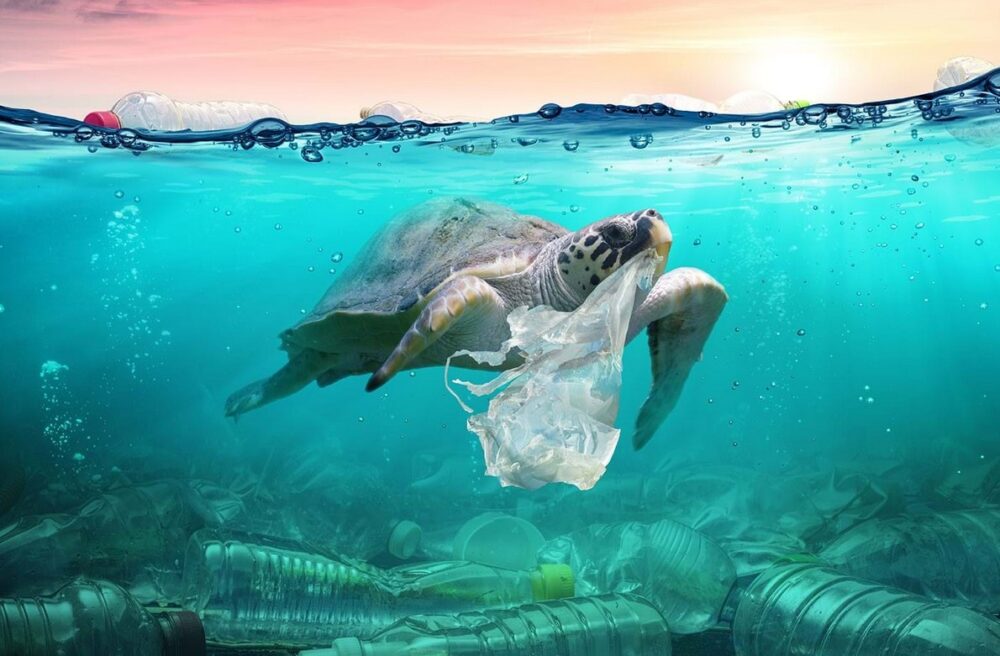 Plastic in the Ocean Facts

While the concept of an ocean full of plastic might not seem so daunting, the reality of how plastic has affected the health of the planet can be horrifying. Thanks to industrial and consumer dumping, an estimated 99% of all seabirds have ingested plastic, which can cause toxicity, disease, gastrointestinal failure, heavy metal poisoning, and death. Sea turtles, which commonly mistake plastic bags for jellyfish, are rapidly declining in numbers. This is mainly due to a loss of their natural habitats and breeding grounds, fewer food sources, and death by plastic.

It isn’t only animals that suffer from this reality. Seafood is an essential resource for humans worldwide. Yet, with vital fish and shellfish populations at risk due to environmental loss, this resource is quickly dwindling. Despite the enormous toll of plastic pollution, animal species that have survived are often filled with microplastics and the chemicals used to produce them—as a result, making them inedible or harmful to human health.

When plastics are dumped into the ocean, some sink immediately to the ocean floor. Some become entangled and remain in one place for years. Some migrate for miles with the current. Accordingly, certain ocean areas have become natural accumulation zones. Plastic waste gathers, creating an ‘island.’ The largest accumulation zone is located halfway between Hawaii and California. Indeed, earning it the nickname “The Great Pacific Garbage Patch.” The pacific plastic island is estimated to be made of upwards of 2.4 million tons of plastic, covering an area two times larger than Texas. 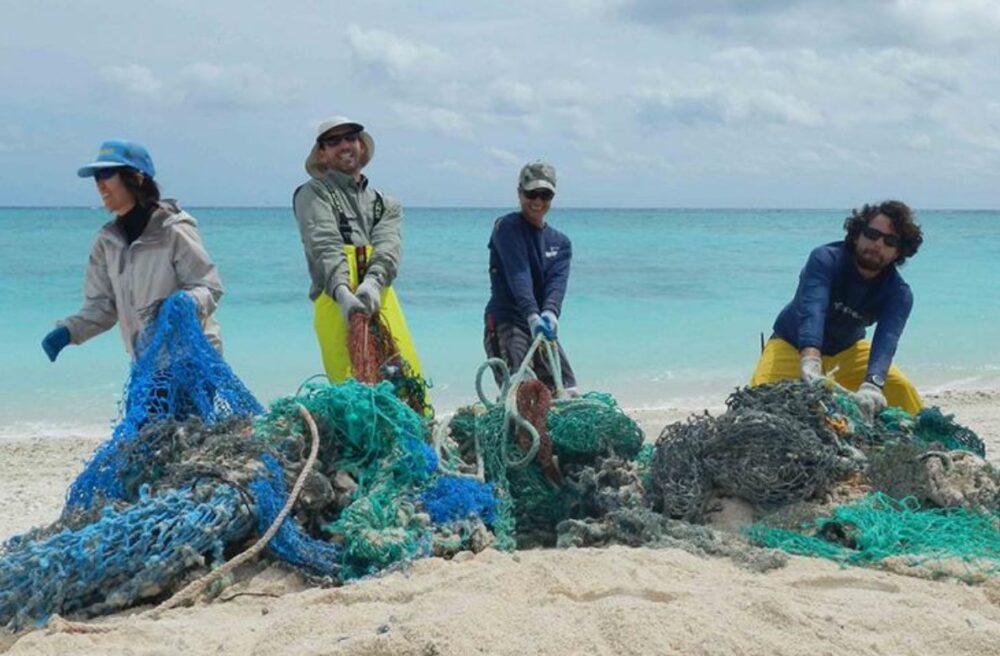 How to Clean Up Plastic from the Ocean

While the facts may be alarming, it isn’t too late to do something to clean up the ocean by learning how to eliminate plastic from your life. Simple steps like: giving up bottled water, investing in reusable containers, and using your silverware rather than plastic cutlery when you order out, can make a big difference. This especially rings true if you teach your friends and family to do the same.

Another easy way to reduce your plastic consumption is to support businesses and organizations that take steps to combat pollution and climate change. Programs like the Plastic Negative Initiative encourage companies to replace their plastic packaging with more sustainable materials. Or better yet, work to offset their plastic consumption to become plastic negative – meaning they help eliminate more plastic waste than they produce.

Plastic pollution has already gone too far, but that doesn’t mean there is no hope of repairing the damage that has been done. Small changes made by many people can make a big difference. Even doing something as simple as supporting your favorite eco-friendly brand can help change the world.