Home » News » Interview: How The Elder Scrolls Online Team Made A Real Tabletop Game In A Digital World

Interview: How The Elder Scrolls Online Team Made A Real Tabletop Game In A Digital World

“We pull from our experience a lot – I’ve been a gamer for decades, playing a lot of tabletop card games,” Tales of Tribute lead designer Irenio Calmon-Huang says. “I’ve played everything from Dominion, Ascension, Star Realms, Munchkin, and more. [Saying card games are close to my heart is] an understatement – I would feel that they have a permanent apartment in my heart.”

The Elder Scrolls Online is trying its hand at card games, implementing a whole new minigame as part of the upcoming High Isle expansion. It’s called Tales of Tribute, a more grounded tabletop experience that’s meant to feel at home in the game’s world, like something people get up to on their downtime when they’re not skewering Daedra or going on hunts for minotaur and giant serpents. And part of making it feel at home is baking it into the world, such as retroactively adding it to existing areas, older DLCs, and the base game. But it goes beyond being part of the world, expanding on it, introducing new lore and building on existing ideas.

“There’s the story content, but each of the decks we have built has its own theme and lore basis,” creative director Rich Lambert adds. “I’ll give the quick example of the St. Pelan patron deck – he was a pretty iconic figure in [The Elder Scrolls’] history and some of the mechanics play into that. He came from Bangkorai Garrison and so there’s stuff related to the garrison in the cards. There’s the order of knights, the portcullis, the reinforcements, things of that nature. So if you look at the card names and a little bit of the art, as well as the patron, you’ll see how some of that comes through.” 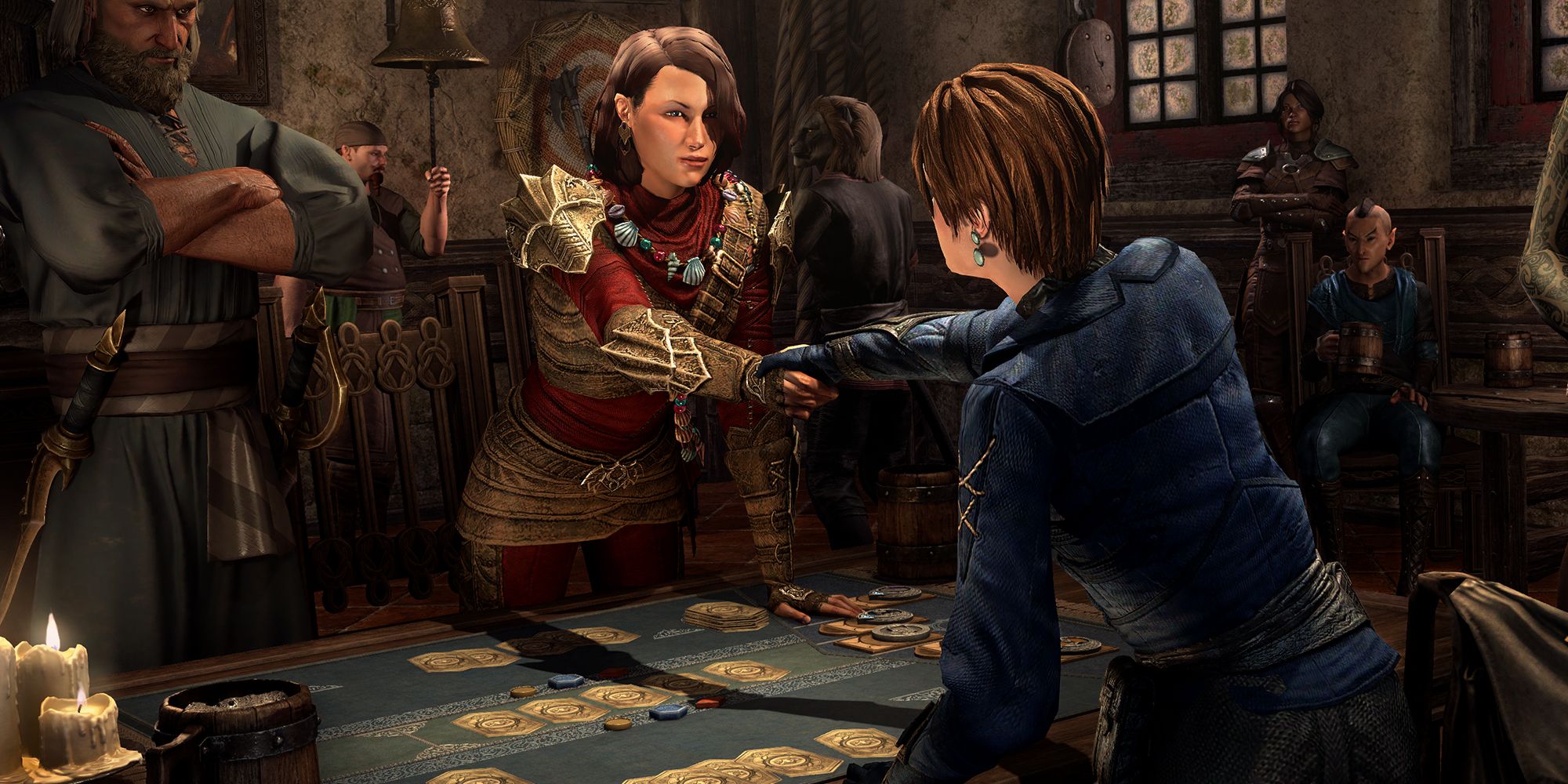 Art is an important part of making Tales of Tribute feel like an integrated tabletop game, not just a flashy minigame plastered on top of an MMO. Like with any of ESO’s PvP modes, it has a basis in ‘reality’ – the massive, full-scale fights are part of the Three Banners War, vying for control of Cyrodiil, while the more arena-like Battlegrounds are in-universe sports with tournaments, announcers, onlookers, and more. Tales of Tribute similarly tries to base itself in the world, so it’s played on literal tables, not through menus, and that ‘real’ feeling extends to the art design.

“[Art] is one of the bigger challenges that the team had,” Lambert tells me. “Painstakingly, is the word I’d use,” Calmon-Huang adds. Lambert continues, “[The challenge was to] make this feel like a physical game, even though it’s a digital game – make it feel grounded in the world to normal people who aren’t magic playing this game. That led to a lot of decisions. In terms of the style, the art team – and our art director – really nailed that visual look. The card art feels medieval, and they took a lot of inspiration from those times.

“There was a period where we were looking at just art across the centuries and from all over the world,” Lambert says. “We took inspiration from Japanese woodcuts, African paintings – there’s a lot we were referencing. And of course, a lot of Renaissance art as well in order to come up with this kind of style which I think really hit the nail on the head.” 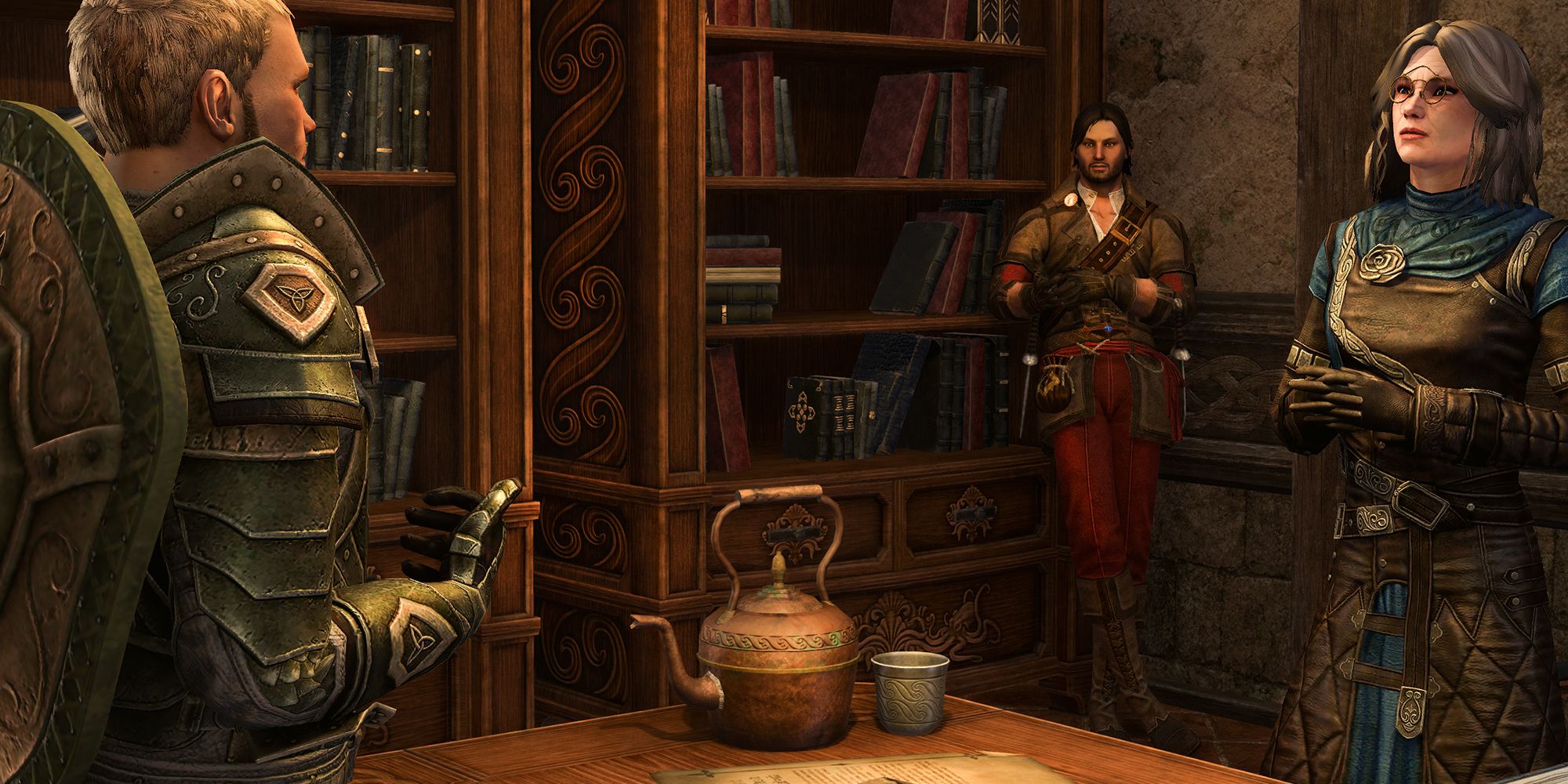 The art is one thing, but the actual visual design of the board is just as important in keeping that realistic, physical feeling – the table backdrop rather than a blank colour or menu, the objects in your surroundings, and the movement of the cards. It harkens to other contemporary games like Assassin’s Creed: Valhalla and The Witcher, both of which had dice-based minigames that were part of the world, played by specialists, beggars, local inn folk – everyone. They didn’t pull you away into an obvious menu like Gwent but rather integrated it into the environment.

“The inspiration was definitely, ‘Try to keep it in a grounded, real world’, but we still need to have a little bit of pomp and a little bit of flair in there,” Calmon-Huang adds. “We use little tokens to keep track of your points – rather than having a scoreboard. We have an hourglass to signal the end of your turn, coins, and arrows to signify who is being favoured by the patrons. It’s a lot of painstaking design process to go in and be very strict in terms of how we show that stuff.”

With it being so heavily influenced by physical tabletops, trying to capture that same feeling of pulling out a board and playing with your friends in real life, I had to ask if the team had ruled out the possibility of bringing Tales of Tribute out of the game and into reality, popularity permitting.