Impossible Mission Was The First Game That Ever Scared Me

I remember the first time a game really scared me. But it wasn't Resident Evil, Silent Hill, or anything else you might expect—it was a platformer about a secret agent infiltrating an enemy stronghold. Impossible Mission was made by US developer Epyx, and first appeared on the Commodore 64 in 1984. It was later ported to a number of different platforms, including the Sega Master System, and it was this version of this strange, perplexing game that I played. It's been decades, but the memory of it has been lingering in my mind ever since.

In Impossible Mission the aforementioned secret agent is tasked with infiltrating the secret underground lair of a Bond-esque evil genius, Professor Elvin Atombender. What a name. At the start of the game he welcomes you into his maze-like hideout. "Another visitor?" he cackles. "Stay a while. Stay forever!" A corny line, but the primitive, scratchy digitised voice he says it in—which was the height of technology in the late '80s—always freaked me out. It still does. It sounds demonic and establishes the game's unsettling vibe. 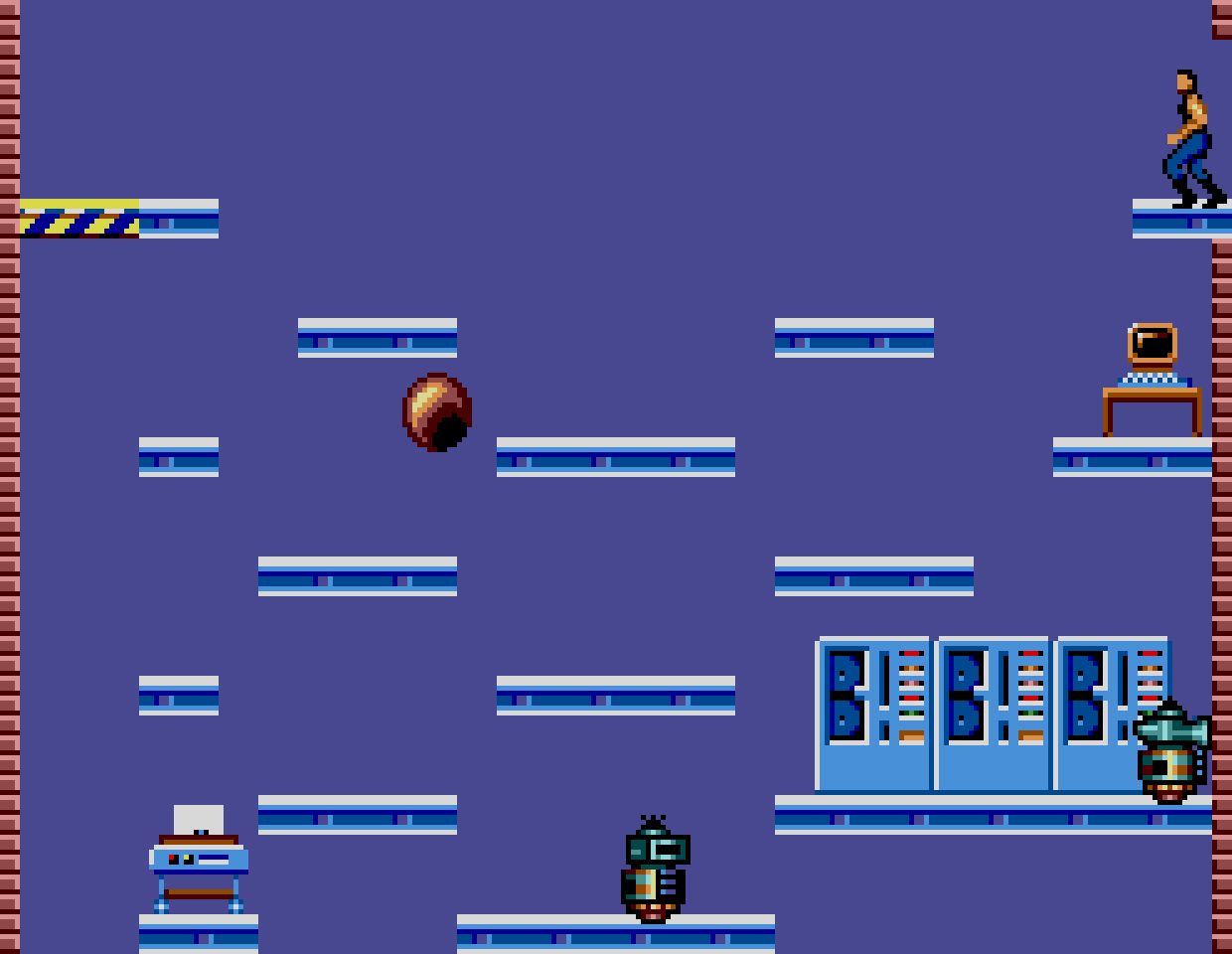 The game involves searching a series of platform-filled rooms for 36 pieces of hidden data in order to decrypt a password, break into Atombender's control room, and stop his nefarious plot. Along the way you also have to deal with killer machines, including Dalek-ass robots that zap you with arcs of electricity and floating orbs that chase you around. It's a challenging, bewildering game—especially if, like me, you were a kid when you first played it. I had no idea what I was doing, which only added to my fears. What is this?

I was into Sonic the Hedgehog, Alex Kidd in Miracle World, Psycho Fox, and Castle of Illusion—all straightforward, cartoony platformers. But then I slotted the Impossible Mission cartridge into the console and I was immediately out of my depth. It was hard, weird, and confusing—and I hated how it sounded. The crackling of the not-Daleks' electricity guns and the shrill, repetitive siren-like sound they made as they moved. The echoing footsteps of the agent as he ran. The atonal whirring of the elevator as it moved up and down.

I'm watching a YouTube playthrough as I write this, and that surreal, discordant sonic landscape still gets under my skin. I wondered if my memories of this game being scary were just a faded imprint on a young mind, but nah. This shit is creepy. The art is oddly abstract too: industrial platforms, brightly coloured backgrounds, and pieces of incongruously normal-looking furniture scattered around as you have to search for password fragments. Everything about Impossible Missions seems designed to baffle and disorient.

The game was well received when it first launched, with influential games magazine Zzap! 64 declaring it the second best game on the Commodore 64. It received high review scores across the board, and spawned not only a sequel, but a remaster that made its way to the Nintendo Switch as recently as 2019. I'm sure a lot of people have fond memories of it, but for me it's that nightmarish game I played as a kid, sitting in the dark in front of my portable TV, hearing those spine-chilling sounds, and wondering what the hell was going on.