The combat trials are all about getting into fights, of which there is a lot of opportunity in Sea of Thieves.

How To Complete The Ambitious Mercenary Trial On Sea Of Thieves 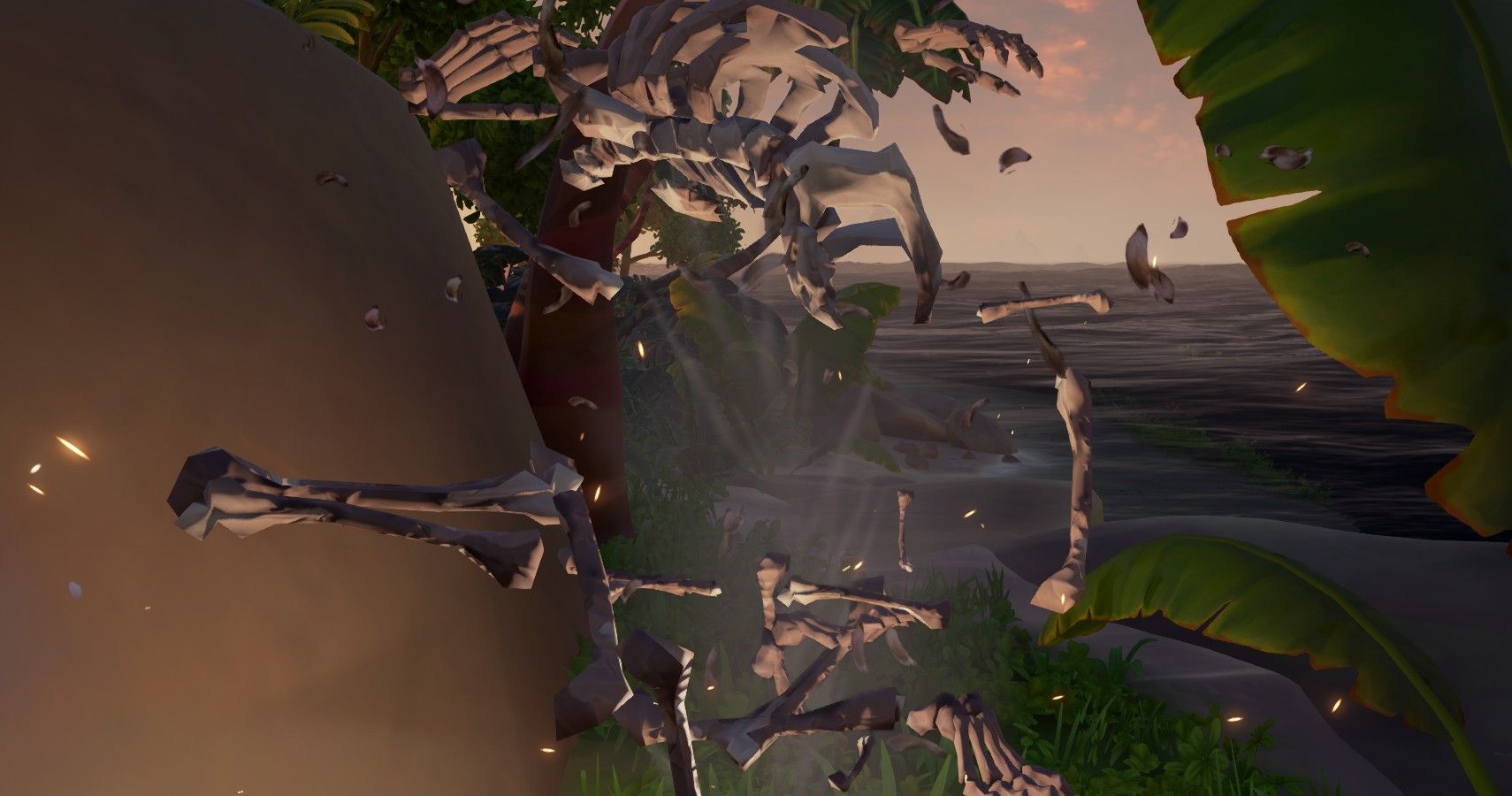 The Ambitious Mercenary Trial introduces players to the undead menace that haunts the Sea Of Thieves. The first deed wants you to destroy twenty skeletons. Skeletons can spawn on more or less every island that isn’t an outpost or seapost, and come in a number of variants. All of them have access to the same collection of weapons and Gunpowder Barrels so look out for whatever they are holding.

The most common variant is the plain skeletons. They have no special abilities and will try and run away or heal with a banana whenever they get damaged.

Plant Skeletons are covered in seaweed, coral, and flowers, and look a lot leafier than the other skeletons. These variants are more powerful and have more health when exposed to any water. Lure them away from the coast or ponds if they spawn nearby and attack them when their plants look withered to do the most damage.

Shadow Skeletons appear as ghostly shadows. They are completely invulnerable in darkness so are easiest to fight during the day and outside. If you’re stuck fighting them underground or at night, use your lantern to light them up and you sill see them solidify and scream because of it. After that, you’ll have a couple of seconds to do damage with your weapon before they become shadows again. If you have a few crewmates with you, have one of them keep a lantern held high to keep the Shadows vulnerable.

The final variant is the Golden Skeletons. These monsters are covered in golden treasure can be extremely hard to kill. Your sword will bounce off when attacking so you can’t get a good combo and they will several shots before going down. Lure them into water, or hit them with a water bucket, and they will rust becoming easier to defeat. Alternatively, use firebombs to ignite them or Gunpowder Barrels to explode them and they will be destroyed very quickly.

You’ll tell some skeletons are spawning nearby because the combat music will start. After that, you can see them digging themselves out of the ground. Use your cutlass, guns, Gunpowder Barrels, or even the cannons of the ship to destroy them. Once twenty have been destroyed, this deed will complete.

The second deed wants you to destroy a Skeleton Captain. These are tougher enemies that take even more damage, but can still either plain, plant, shadow, or gold in variety. Skeleton Captains can spawn randomly on islands that aren’t outposts or seaposts but it can be easier to find one by taking a voyage from the Order of Souls.

The Order of Souls wants you to destroy these Captains and will issue warrants for them. Simply buy a voyage from the Order of Souls (found on any outpost) and head to the specified island after accepting the voyage on your Captain’s Table.

Once there you’ll have to search the island for the Captains, who will only spawn after several waves of other skeletons. You can tell if you’re in the right area as the skeletons will have more of a uniform than normal, and the puzzle will denote the presence of a skeleton crew. Once the crew is taken care of (which can help with completing the first deed) the Captain, or Captains will spawn. Simply defeat them like any other skeleton and you will complete this deed.

The final deed wants you to hand in any Bounty Skull. Bounty Skulls are left behind by defeated Bounty Captains, so you should have one when you complete the previous deed. They come in a huge number of variants but the most basic are the Foul, Disgraced, Hateful, and Villainous. The other will be explained as they become relevant in different trials.

How To Complete Ambitious Reaper In Sea Of Thieves 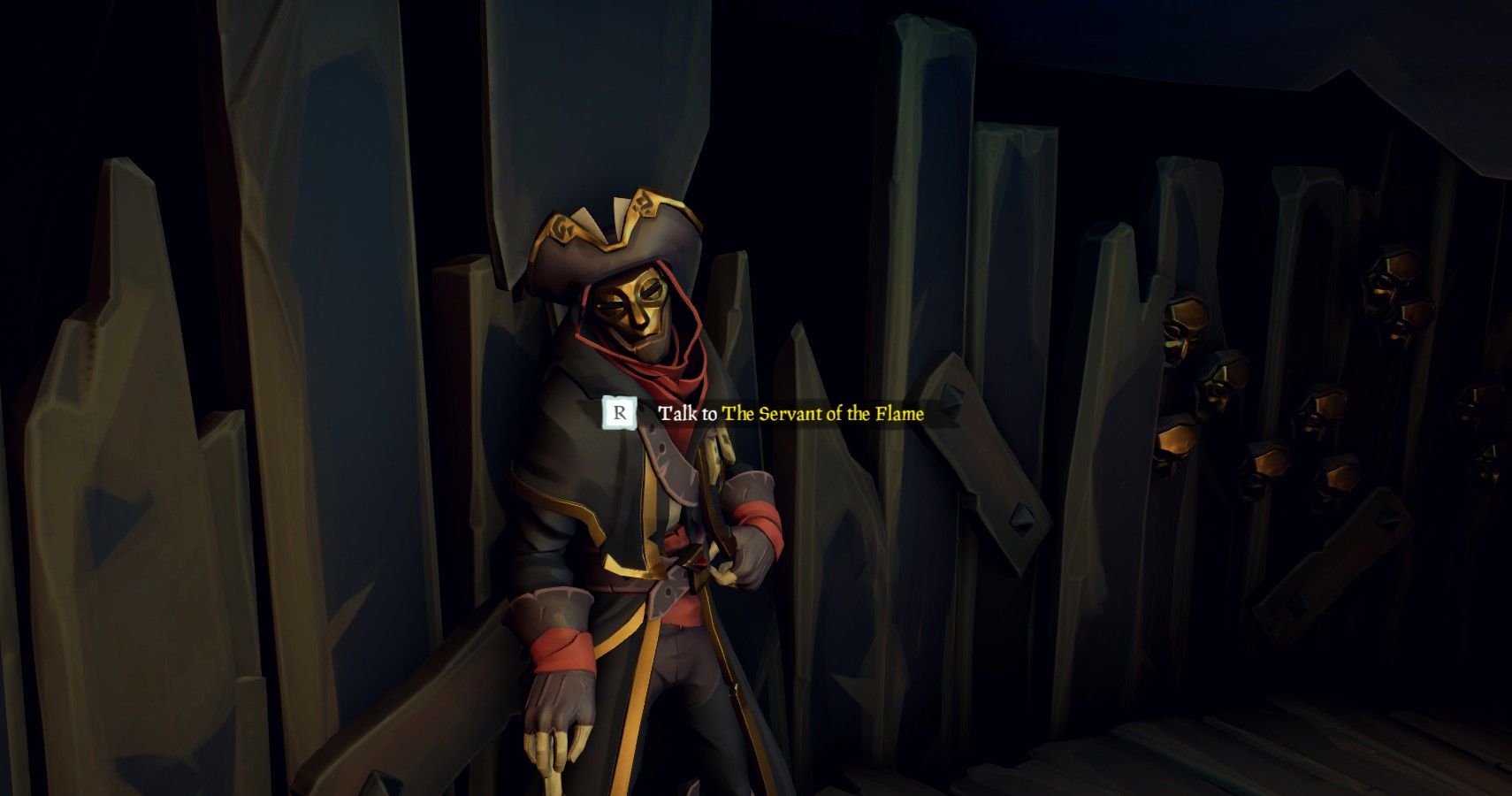 They will accept literally any skull you happen to find but the most common are the bounty skulls that are rewarded for defeating Skeleton Captains. The easiest method to completing this deed is to take on an Order of Souls voyage, and take at least one of the bounty skulls to Servant of the Flame at the Reaper’s Hideout. Once done, you will have completed this deed.

You can find Reaper’s Chests in the shipwrecks scattered across The Sea Of Thieves. But you don’t have to look for the flock of birds on the horizon. Instead, look for the spirally red and green lights on the horizon. They can be seen from anywhere on the Sea of Thieves and circle over a Reapers Chest. Because they can be seen from anywhere they might be quite far away so your journey might take a while.

While they aren’t that valuable in themselves, some players will hunt any player that can find and you will probably be the easiest target.

If you’re worried, try sailing in zigzags to make it difficult for other pirates to determine where you’re going. If you start sailing straight for the Reaper’s Hideout, they will know exactly where you are going. This tactic only works if they player can’t see you though. If they are chasing you, you’ll have to try and lose them, or if not, race to the Reaper’s Hideout and jump over board with the chest to try and deliver it before the other pirates can catch up.

How To Complete The Firestarter Trial In Sea Of Thieves 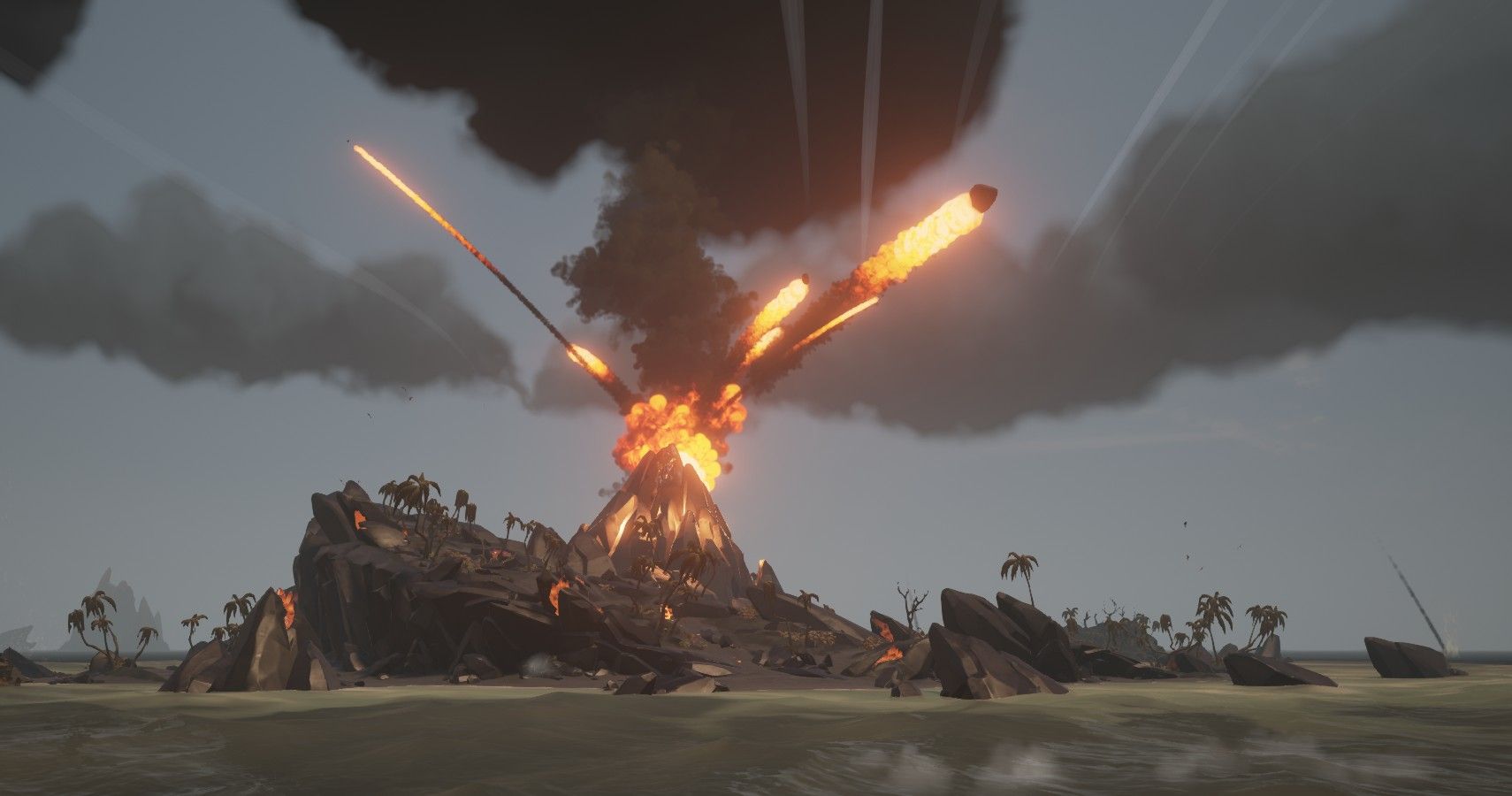 The Ambitious Firestarter trial wants you to not only utilize fire, but visit its home in Sea of Thieves, The Devil’s Roar.

The first deed wants you to find a way to set a Skeleton on fire. The easiest way to do that is to use a firebomb. You can find a few in your cannonball barrels on your ship and more in barrels scattered around the outposts and islands on the Sea of Thieves. While you can fire them from cannons, you can also just throw them where they will explode on contact, setting everything and everyone in the radius on fire.

With one of these in hand, simply find a skeleton and turn it at the target to set it ablaze. Make sure to keep your distance or you’ll be set alight as well.

There are a couple of other ways of doing this, including using Gunpowder Barrels or volcanoes in The Devil’s Roar, but this is by far the easiest. Once you’ve set the skeleton on fire, the deed should complete.

The second deed wants you to catch a single Devilfish within The Devil’s Roar. This requires you to go fishing in the Devil’s Roar region in the open water, away from the islands. You can use grubs to increase your chance of finding a Devilfish but the variant and quantity don’t matter.

You also don’t have to turn in or cook the fish and the deed should complete as soon as you’ve caught it.

The third deed simply wants you to set foot on any island within the Devil’s Roar. This is the volcano-filled region to the east of the map. All you have to do to complete this deed is sail to any of the islands (preferably one that is currently erupting) and set foot on it. This includes Morrows Peak Outpost but be warned that even this island is potentially violate.

Once you have set foot on any of the islands, this deed will complete so you’ll probably do it naturally as you play.

Next: Screw Waypoints, Video Games Should Make You Feel Like An Adventurer 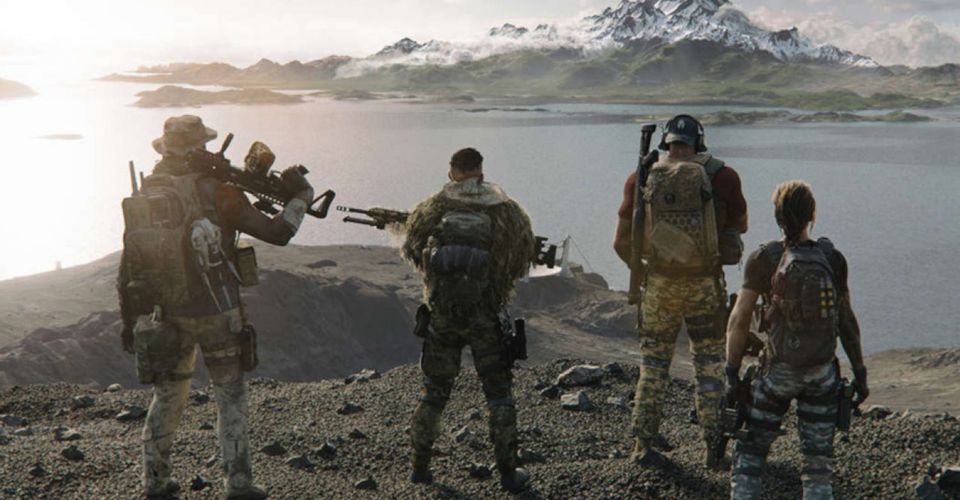