How TerminusDB is commercializing its open source graph database

Knowledge graphs play an integral part in many modern applications, enabling businesses to extract new information by aggregating and analyzing connections between large volumes of internal data. Music streaming services, search engines, fraud detection software, and more can all be aligned through their use of knowledge graphs to derive insights from big data.

While standard databases can usually find connections between data that is closely related, graph databases are designed to join the dots between pieces of data that are not so obviously related. It’s one of the reasons Alexa can answer your myriad questions and Facebook is so good at making friend recommendations.

Against this backdrop, Irish startup TerminusDB has raised €3.6 million ($4.3 million) in a seed round of funding to build what it calls a “knowledge collaboration infrastructure” for the internet, combining an open source graph database and document store with a commercial, cloud-based collaboration hub built for TerminusDB. As the company’s commercial and operations lead Luke Feeney put it, the relationship between TerminusDB and TerminusHub is analogous to that of Git and GitHub. “One is the basic tool, the other is the collaboration hub,” he told VentureBeat.

As a side point, TerminusDB is also a founding member of the recently announced AI Infrastructure Alliance, which is focused on promoting open standards and interoperability for AI and ML applications in the enterprise.

The core open source graph database, which is called TerminusDB, can be downloaded and used by anyone for whatever purpose they wish on their own servers. The commercial component, known as TerminusHub, ships with various pricing plans (including a basic free tier with restrictions) and a bunch of add-on features for sharing and building databases, including support for full versioning that allows developers to roll back updates. The startup said it will use the funding to launch TerminusDB Live, which is a cloud-based version of TerminusDB “that will allow people to get started without having to spin up their own servers,” Feeney added. 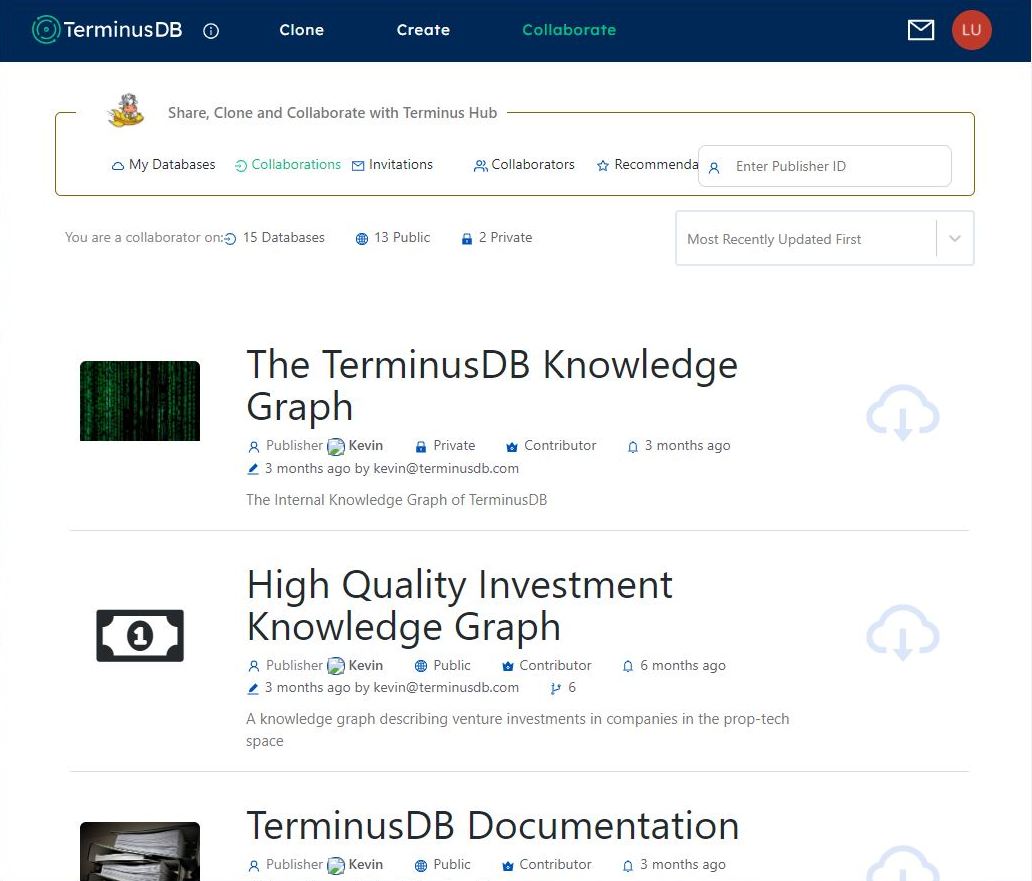 The graph database market was pegged at $1 billion in 2019, a figure that’s projected to rise to rise threefold by 2024. Notable players in the commercial space include Oracle, Microsoft, AWS, and IBM, though perhaps the most obvious comparisons in terms of TerminusDB would be something like Dgraph or Neo4J, which also offer open source graph databases supported by commercial companies of the same name. Neo4J specifically has raised nearly $200 million in external funding, including a $30 million tranche just a few months back.

According to Feeney, TerminusDB is looking to distinguish itself on a number of grounds, including the way it combines immutability (being able to revisit past database states) with fast query, strong schema, and “ease-of-use.”

“We are really good at collaboration on schema and data,” Feeney said. “Nobody else can do it as flexibly at scale. We take all of the Git/GitHub workflows and make them applicable to data. So you can clone the production database, branch, merge, lineage, versioning, and time travel — all the Git-like revision control for large databases.”

Spun out of Trinity College Dublin in 2017, TerminusDB says it has a number of customers, though it wasn’t at liberty to reveal any names. Feeney did share some well-known names already using the open source TerminusDB, including ING Bank, Lockheed Martin, BN Bank, and the University of Oxford.

In terms of how TerminusDB sees its platform being used, Feeney said it wants to allow companies to “provide data ownership to domain data owners,” meaning that marketing teams would own their data, as would sales, who would then be accountable for providing their data as products.

“TerminusDB is still installed on a server or cloud, like the others, but each instance within an organization is a decentralized node that is brought together in TerminusHub,” he said. “I have a data product on my distributed remote, I make a change and push that change to the central TerminusHub, that is then available for other teams to clone and use for their analytics.”

Moreover, as the world has transitioned to remote working, TerminusDB would facilitate communication between data distributed across multiple locations.

“We are challenging the assumption that organizations must centralize big analytical data to use it effectively,” Feeney explained. “In a remote-first world, decentralized solutions like TerminusDB will thrive.”

That is the enterprise use case TerminusDB envisages. For developers and businesses adopting the open source TerminusDB, Feeney thinks the company will come into its own as the backend for countless data-intensive applications.