Hopin, a fledgling U.K. startup that is rapidly gaining ground in the burgeoning virtual events space, has raised $125 million in a series B round led by IVP and Tiger Global. This raise values the 17-month-old company at a staggering $2.1 billion.

It has been a whirlwind year for Hopin, which went to market in 2019 shortly before the pandemic arrived. With social distancing and remote work becoming the norm for millions of people, businesses canceled their big-budget brick-and-mortar events in droves, embracing livestreams and similar virtual alternatives.

Hopin’s gargantuan raise, which follows a $6.5 million seed round in February and its $40 million series A just five months ago, validates some impressive metrics. Hopin has grown from eight employees, 5,000 registered users, and 1,800 client organizations eight months ago to 200 employees, 3.5 million users, and 50,000 organizations today. And the company plans to make a further 150 hires by the end of the year.

These numbers would be eye-watering at the best of times, but they happened during a pandemic that has grounded businesses around the world. And before the naysayers point to yesterday’s otherwise positive vaccine news that sent Zoom and similar “work-at-home” technology stocks tumbling, Hopin has planned all along for a world in which offline and online events coexist — after all, the company was created before the arrival of COVID-19.

“Events will never go back to the way they were — hybrid is the future, and our investment in innovation and in our products will be toward moving the world to hybrid events,” founder and CEO Johnny Boufarhat told VentureBeat.

Hopin’s story actually goes back five years to when Boufarhat was struck down by what he calls a “severe reaction” to a medication that affected his immune system and his ability to venture outdoors.

“Fortunately, we live in a connected world, and even though I was stuck inside, there were all sorts of ways I could interact with others from home,” Boufarhat said. “But there was an aspect of my previous life that I couldn’t reproduce in the digital world: events and meeting people, interacting with them, and learning from them.”

According to Boufarhat, the lack of virtual events that came anything close to their offline counterparts wasn’t down to a lack of appetite.

“The reason they barely existed was that there wasn’t a good platform people could use to build them,” he said. “I decided to create a virtual venue that was so useful that it would transform online events into indispensable experiences. After plenty of fits and starts — and a year and a half of coding — I founded Hopin.”

Hopin was officially born in June 2019, with the first customers joining the platform around that same time. Following a small preseed funding round led by Seedcamp in October 2019, the company accelerated its product development, arriving at its “product market” fit in January ahead of an Accel-led seed round.

It’s easy to gloss over Hopin’s hockey stick growth trajectory in 2020 without considering the work required to facilitate it. Growing a workforce of just eight people by more than 2,000% in eight months is no easy task, but being a fully remote company with no office space limitations or geographic ties played a big part in helping Hopin do just that.

“Growth hiring is one of the hardest things to do, but probably one of the most important questions for us,” Boufarhat said. “The advantage we’ve enjoyed is that we are truly a remote workforce. Being remote allows you to tap into tons more talent across the globe — we can hire literally anywhere someone is. We removed many complexities by being remote — any company going into hypergrowth, remote is the way to do it.”

While it’s true online events have been growing for some time, it’s equally true that the COVID-19 crisis accelerated the transition by an order of magnitude, putting Hopin and a slew of other fresh-faced virtual events platforms on accelerated trajectories.

Around the time Hopin launched last year, two very similar startups arrived on the scene. Mountain View, California-based Run The World was founded in July 2019 and raised a $4 million seed round in February this year. That was followed swiftly by a $10.8 million series A round co-led by Andreessen Horowitz and Founders Fund in the midst of the initial global lockdown. And India’s Airmeet, which was also founded in July 2019, closed a $3 million seed round in March, followed by a $12 million series A round six months later, with notable backers including Accel, Sequoia, and Redpoint.

Then there’s Hubilo, a five-year-old Indian startup that pivoted from offline event technology to become an online events platform in a three-week period in March. Hubilo recently secured $4.5 million in funding from Lightspeed Venture Partners and other investors.

Similar to its rivals, Hopin offers a range of tools to enable organizers to replicate aspects of real-world events, including support for livestreams for conference keynotes across multiple virtual stages, group meetings, and networking opportunities. 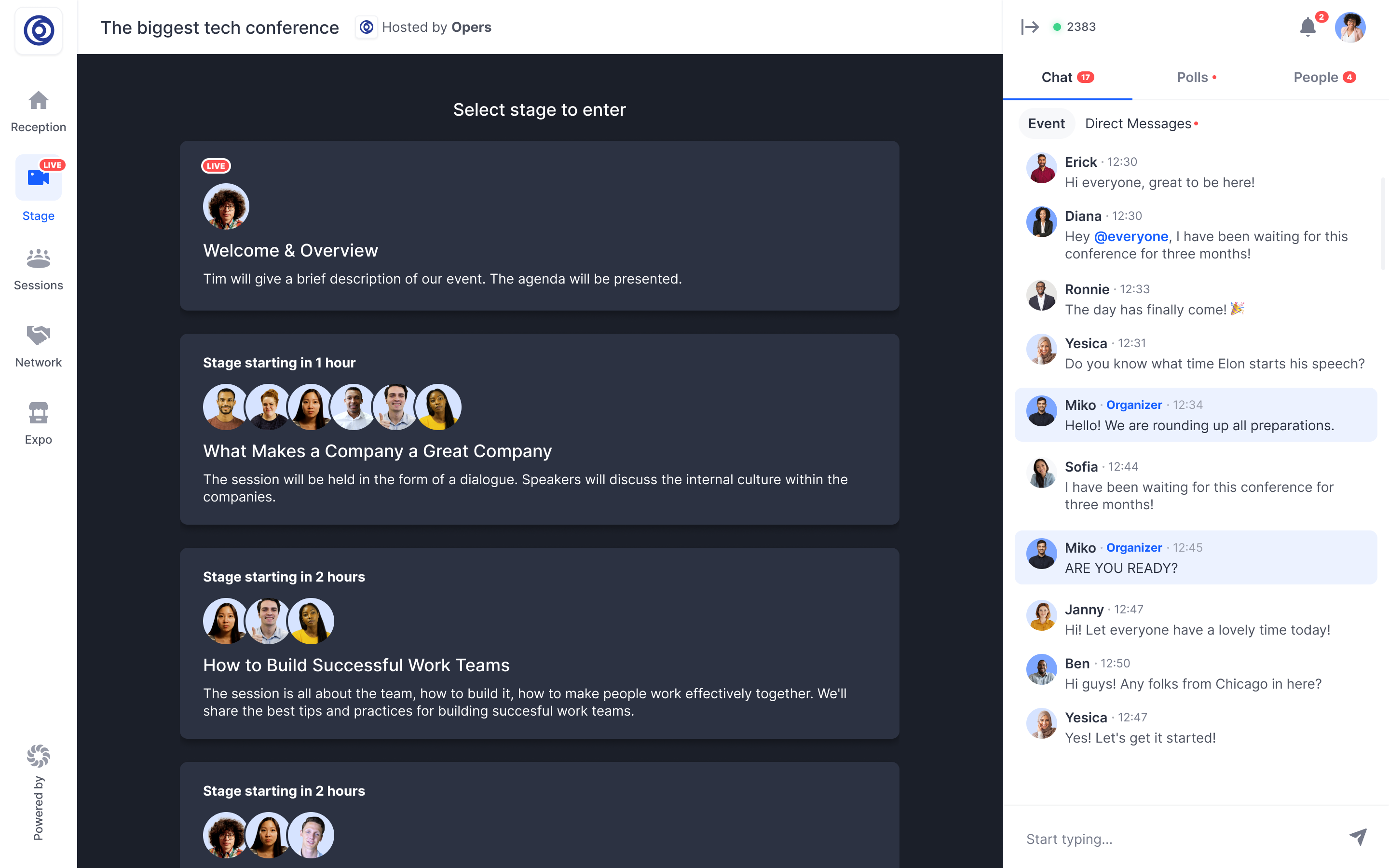 One feature Hopin claims sets it apart is a dedicated networking area where attendees are matched in a timed one-to-one encounter Boufarhat said some people refer to as “chat roulette.”

“This is unique to Hopin and makes discovering new connections fun and engaging at virtual events,” he said. “The feature also lets users exchange ‘virtual business cards’ by clicking the connect button. If both users click Connect, they will be included in the post-event summary with easy ways to follow up.” 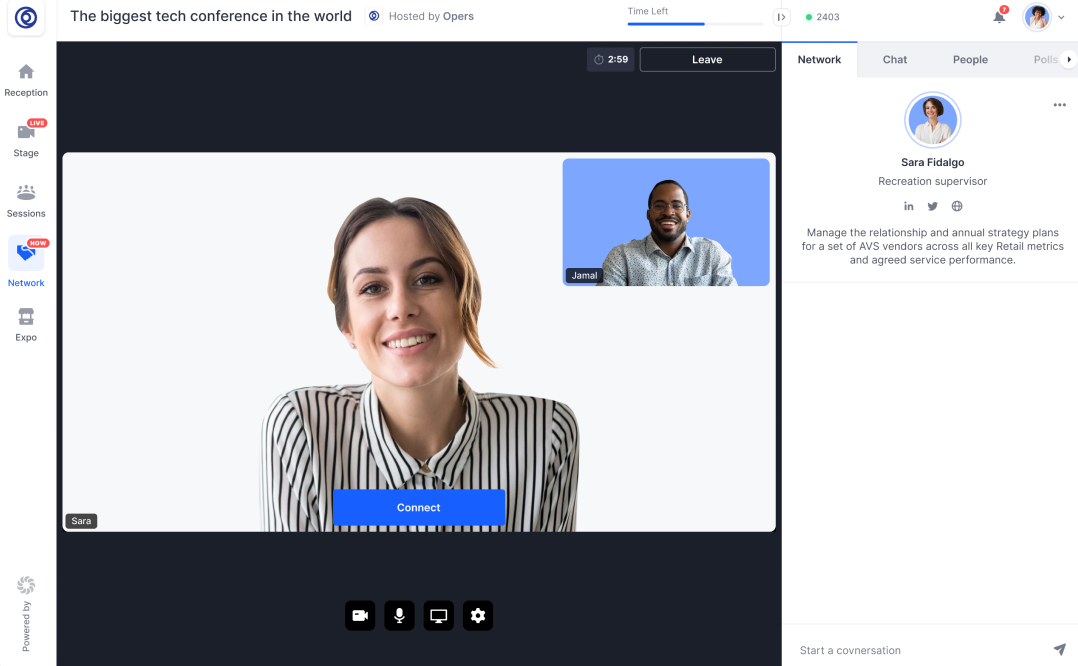 When — or if — the world resumes some semblance of normality, Hopin is betting online events will continue alongside physical events, as virtual events generate a wealth of measurable data that is difficult for brick-and-mortar events to replicate. Data ranges from tracking how attendees experience an event and how engaged they are to correlating specific meetings or keynotes that lead to a desired outcome, such as a new sale or connection.

“Hopin [will be] in a good position post-pandemic, since the platform originated and was designed when the coronavirus wasn’t around,” Boufarhat said. “We operated knowing that offline events were our main competition, which is why the Hopin event experience closely mirrors the benefits of offline events but adds additional advantages, including advanced data reporting, accessibility, reach, ease-of-use, no travel, and sustainability.”

Online events also bypass some of the restrictions imposed by their real-world counterparts, such as the number of people that can be physically present, due to a venue’s size or its location. Hopin and its rivals allow conferences to adopt a more hybrid approach that draws on the benefits of both worlds.

“We see all major events having a virtual component in the future,” Boufarhat continued, noting that Hopin is already enabling organizations to host hybrid events.

Hopin offers a starter plan for $99 per month, which unlocks most of the core platform features. Additional plans open more functionality, depending on client requirements around customization, branding, integrations, and advanced analytics.

The $125 million round, which included investments from Salesforce Ventures, Accel, Coatue, DFJ Growth, Northzone, and Seedcamp, positions Hopin to scale its platform and team and add more big-name brands to a list that already includes Adobe, Dell, Slack, GitLab, Unilever, Twitch, and the United Nations.

Alongside its funding announcement, Hopin is debuting a new beta marketplace called Hopin Events that surfaces global events people can search for across technology, education, business, entertainment, lifestyle, health, and more. These can be filtered by date and cost. 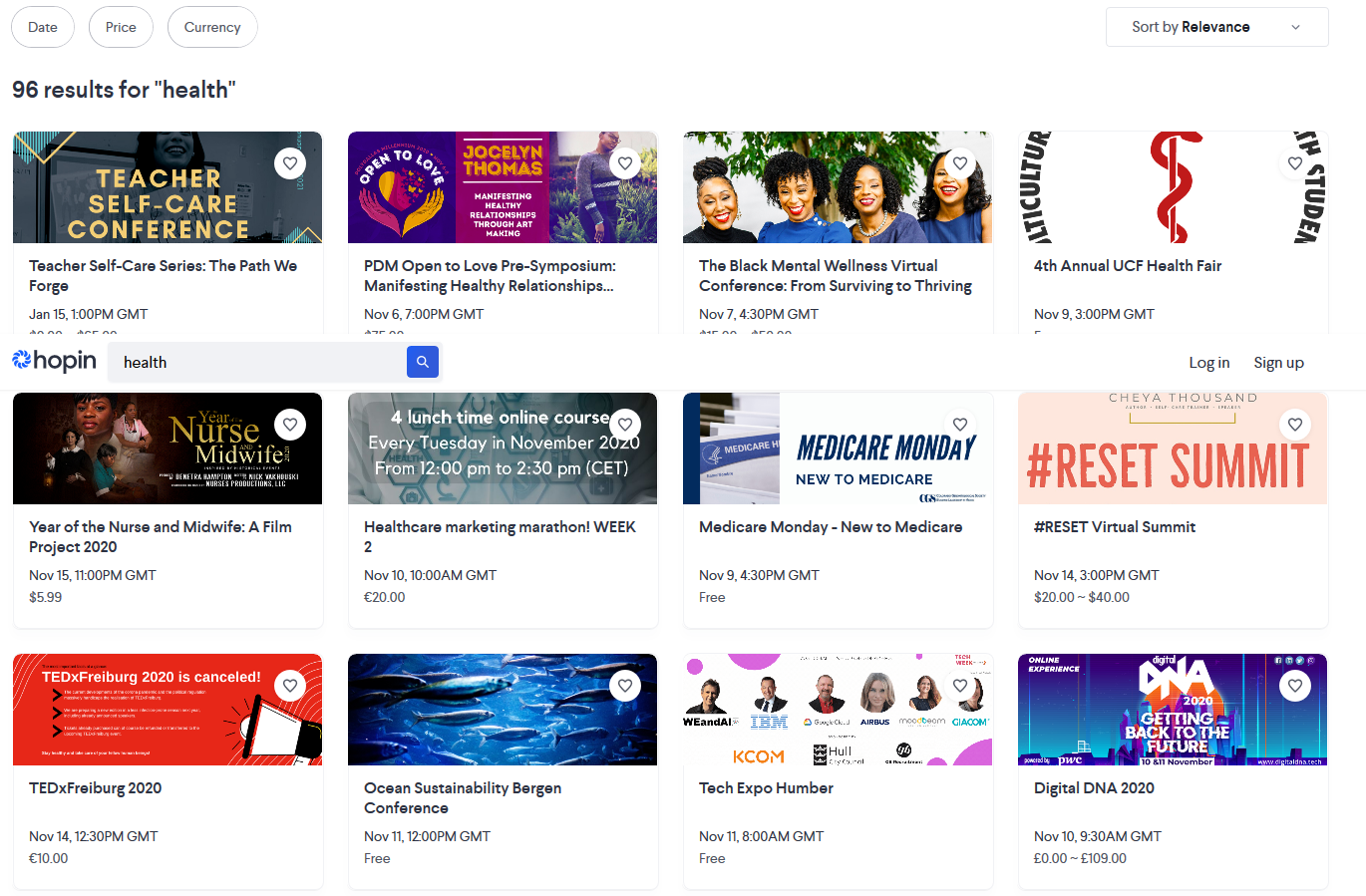 Hopin said it may also consider regional physical hubs for employees when the time is right, though it will continue to embrace remote working. While Hopin is perhaps better known as a platform for events and conferences, it is also being used by businesses for internal meetings and to communicate across their distributed workforces — Spotify, GitLab, and Dell are notable examples of this, not to mention Hopin itself.

Elsewhere, potential uses cases span all manner of online interactions, much as Zoom has shaken off its enterprise roots and is now used for everything from fitness to cookery classes. In fact, Hopin has already been used for yoga classes, virtual theater shows, and even weddings.

However you slice and dice it, Hopin represents one of the biggest recent success stories from the startup world, largely thanks to being in the right place at the right time. Before this chaotic year, the business events industry was pegged at around $1.5 trillion globally, while more recent figures predict the virtual events industry alone will grow from $78 billion to nearly $780 billion over the next decade.

Virtual events are likely here to stay, and Boufarhat is focused on making good use of the company’s investments as it looks to the future.

“It is a high valuation — and not to downplay it, as we are incredibly appreciative of our growth — but for us it’s just a number,” he said. “What’s key is making our customers happy and really focusing on the product. That’s what the money will be used for: We want to always be innovative, and our biggest investment will be in the product and moving the world to virtual and hybrid events.”