Hitman 3’s Ambrose Island DLC arrived this week and adds the game’s first new map since its January 2021 launch. The titular locale is a tropical island in the Andaman Sea, west of Thailand, where a militia is uneasily sharing a small chunk of land with a pirate syndicate. Agent 47 needs to take out the leaders of both groups while traversing jungle, ruins, and a village that straddles land and sea, via a stilted network of boardwalks.

Ambrose Island (which is free to anyone who owns the base game) brings a few tweaks to the gameplay formula of donning disguises and causing chaos, including a slap competition minigame and the addition of moving items in the form of tropical frogs which can be turned into an NPC for a vial of deadly poison. The overall additions here are relatively minor though, and contribute to Ambrose Island feeling a little slight when compared to other superb and sprawling maps — like Dubai, Mendoza, and Dartmoor — that shipped with the game last year.

The big change this time around is IO Interactive's attempt to build on the model of play introduced in the base game's Berlin level. Set in an abandoned nuclear reactor that had been transformed into a dance club, Berlin was an all-time great Hitman map that inverted the series' traditional gameplay by tasking a rogue Agent 47 with picking off five ICA agents without the assistance of his handler, Diana Burnwood. Instead, 47 had to reveal his opponents by getting in close proximity and listening to their discussions over a stolen earpiece. Like that map, Ambrose Island removes Mission Stories. And while Berlin found stellar results in addition by subtraction, this time around, you can, more often, just feel the subtraction. 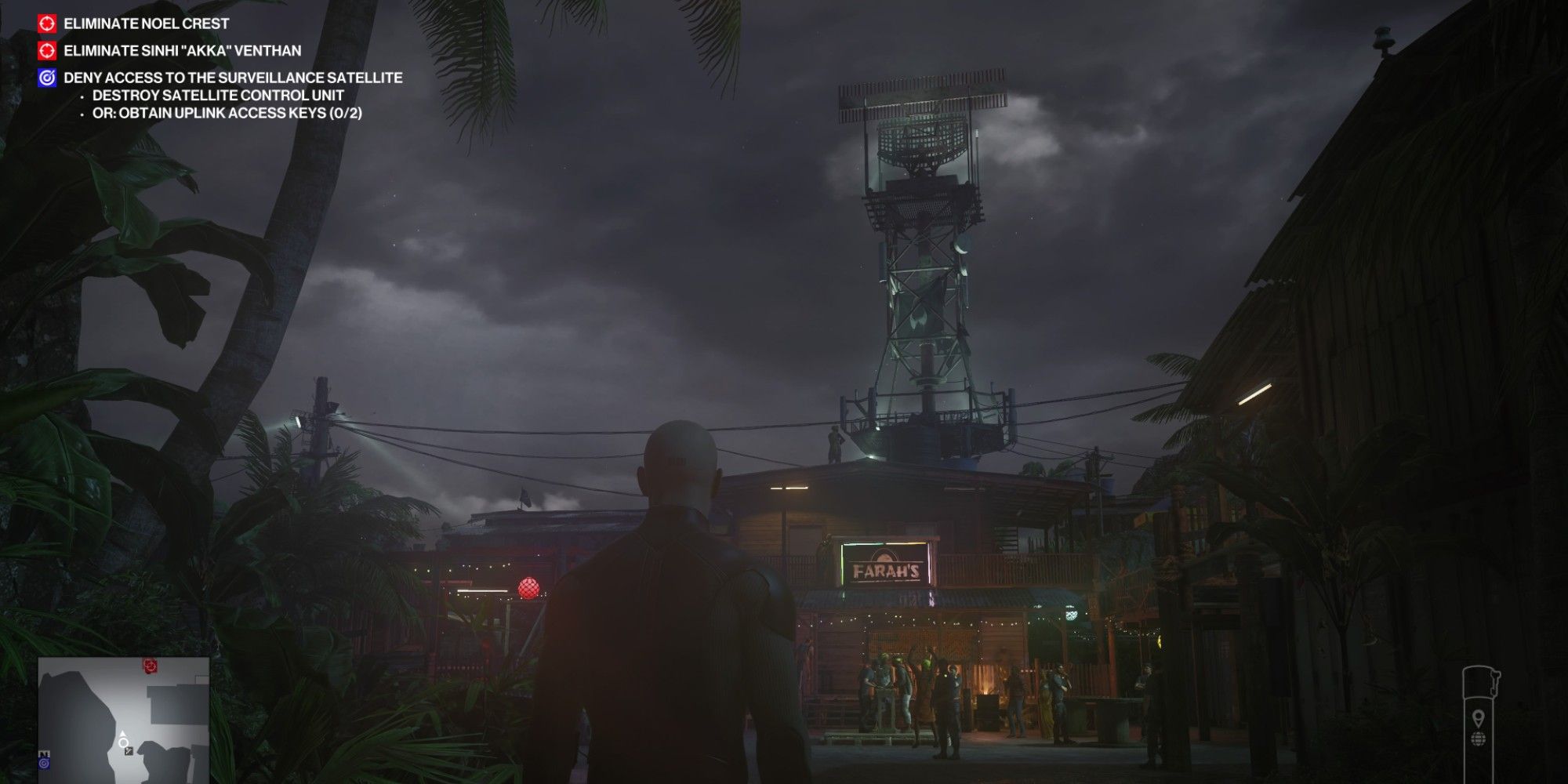 The biggest problem is that there are only two targets: militia leader Noel Crest, and pirate captain Sinhi "Akka" Ventha. So, while Berlin asked 47 to take out several roving agents (and offered a ton of challenges to inspire ideas on how to do it), Ambrose Island is built like a traditional Hitman map with traditional Hitman objectives. But, without the Mission Stories that IO has so effectively used to introduce the varied paths through new maps across the World of Assassination trilogy, getting to learn Ambrose Island’s intricacies can feel more meandering. I often found myself asking, “Is this it?” Also, unlike past tropical Hitman destinations, Ambrose Island is shrouded in perpetual night. Given that the map is mostly exteriors and that much of it is coast and jungle that looks pretty similar to other coast and jungle elsewhere in the level, it can be physically tricky to navigate, too.

Mission Stories have been replaced by NPCs who function as quest givers. Early on, you meet Farah, an estranged friend of Akka, who asks you to find a coconut for her. If you complete that small task, she’ll give you a bigger errand. Complete that and she’ll give you a task that relates directly to your target, and which leads to an assassination opportunity. This is IO’s attempt to take Mission Stories, which are, by nature, handhold-y, and reimagine them as something more organic and self-directed. That seems like a smart direction for the series to take going forward. Unfortunately it isn’t fully realized here, and the resulting implementation just feels like a string of fetch quests until it dovetails into the assassination opportunity. It’s less handhold-y, sure, but as done here, it’s also less fun and more repetitive on subsequent playthroughs.

That’s especially true because in the middle of the quest I mentioned above, there’s a task where you need to find an object buried somewhere on the island. The game doesn’t give you any direction on where that object might be, so I spent a significant portion of my time playing this map just trying to find this object in order to progress. Eventually I found it, but the process of getting there wasn’t more fun than being directly led. Mission Stories have, historically, functioned as a way to get players acclimated to a new level. Replacing them with something more directionless leaves that audience a bit rudderless. 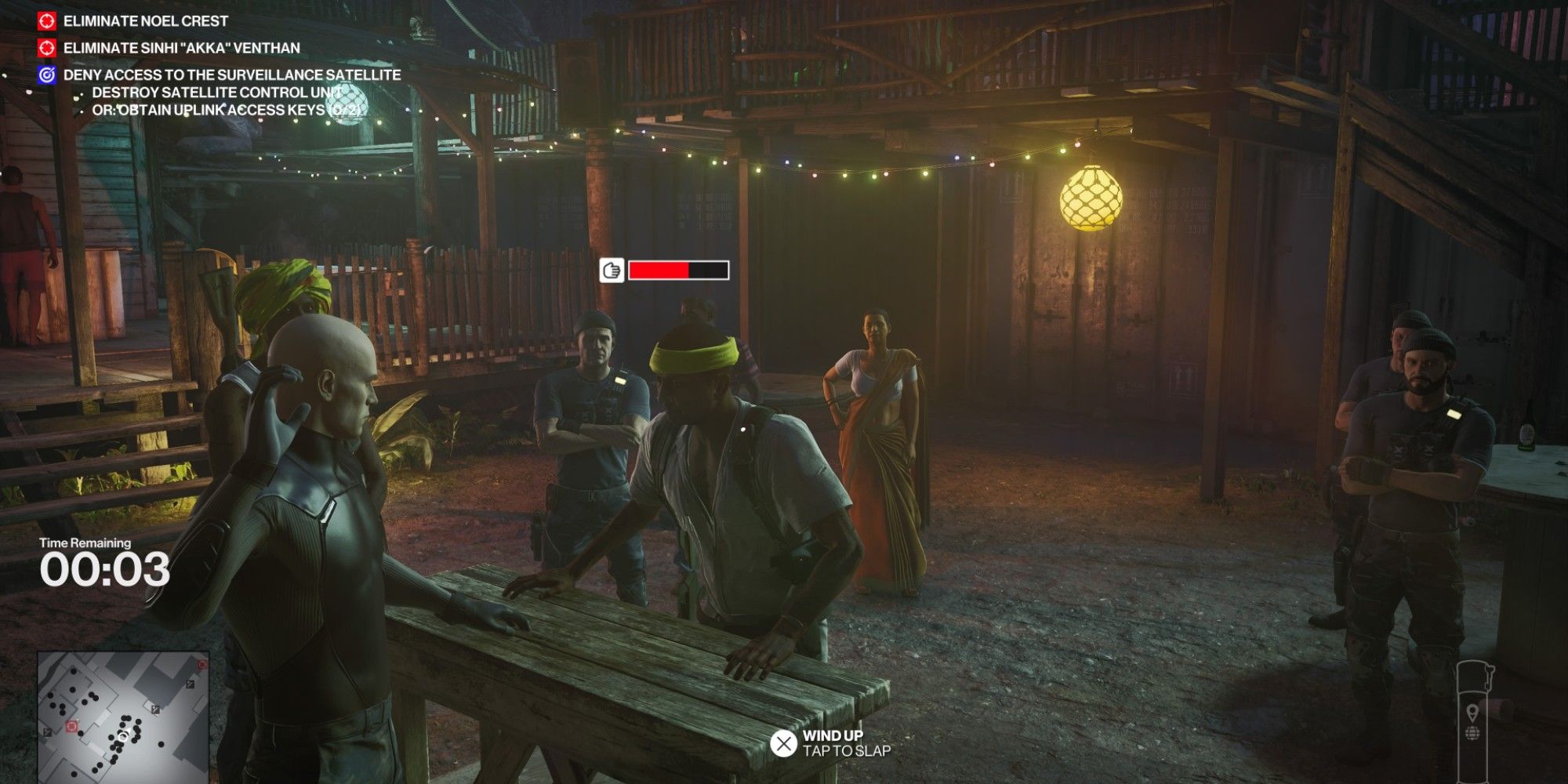 On the other hand, IO has tapped into a real unpredictability that can’t be entirely discounted. With Mission Stories, I know that, if I follow the path laid out for me, it will lead me straight to the kill. Of the quest givers on Ambrose Island, one will lead you directly to a kill opportunity; the other will make you some poison — and that’s it. There is potential in this idea. I can imagine a Hitman map littered with quest-giving NPCs, each offering something unique that may or may not lead to an assassination opportunity. But it isn’t fully realized here. Ambrose Island is an evolutionary step, not quite the future of Hitman, not quite the past.

Though this is the weakest map in the Hitman 3 lineup — excluding, maybe, the experimental train level, Carpathian Mountains — it’s still a Hitman level, i.e. pretty good. It doesn’t hit the standard IO Interactive has set for itself (and it will be a shame if this is the last map Hitman 3 gets), but that still makes it more interesting and worthy of exploration than the vast majority of video game levels I've played this year. IO is playing with interesting ideas, but this iteration just isn't there yet.

Score: 3/5. Ambrose Island is free for anyone who owns Hitman 3.