Helltaker is a smart, funny, and most notably free puzzle game with no microtransactions and a killer soundtrack, so there’s basically no reason not to play it, except maybe for the difficulty. Vanripper’s independent hit has earned a reputation for its punishing challenge, intimidating certain players as a result.

But have no fear, this easy-to-follow guide will walk you through the whole main campaign so that you can take all of hell for yourself while only scratching your head if it itches. Get your keyboard ready and get your thermal clothes ready for the inferno. 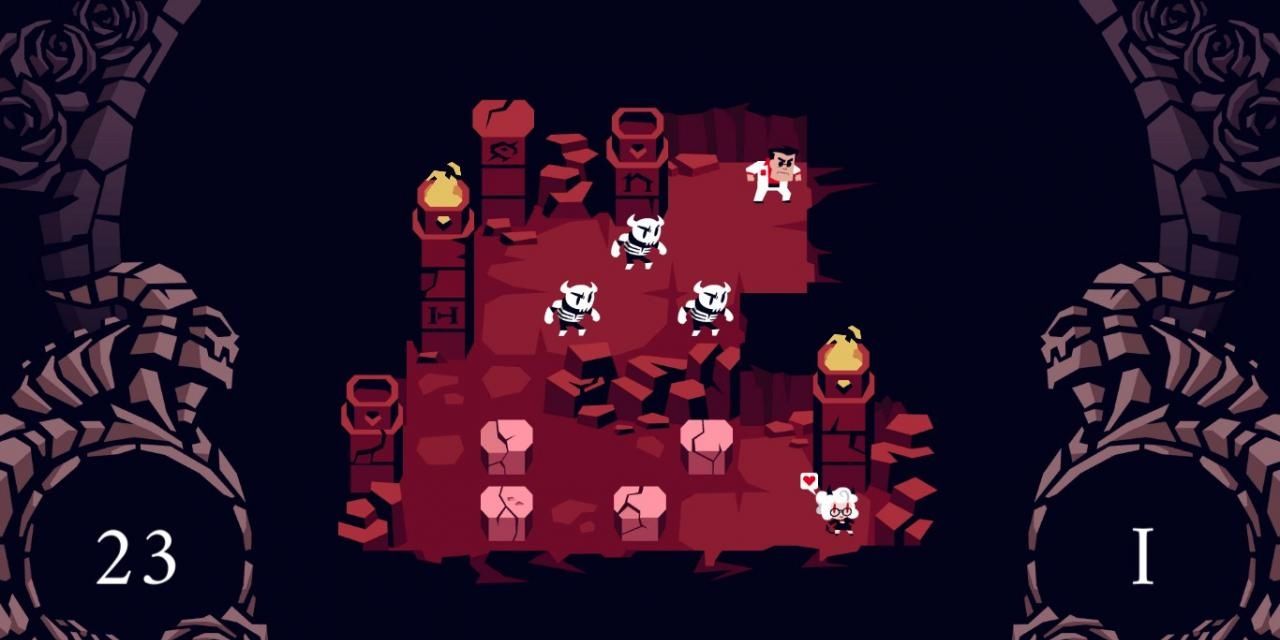 The first lady of the underworld to join the harem will be hell’s secretary Pandemonica, but three skeletons stand in your way to her as well as four blocks just beyond them.

To beat this stage you need to go left and down.

Keep going left until you’ve kicked the first skeleton into the wall, killing him, and then go left once more until you’re against the wall yourself.

Next, head all the way down and to the left and kick the bottom left block to the right, then kick the one above it upwards.

Go up and head to the upper right block, kicking it out of your way, then offer her your services and Pandemonica will be all yours. 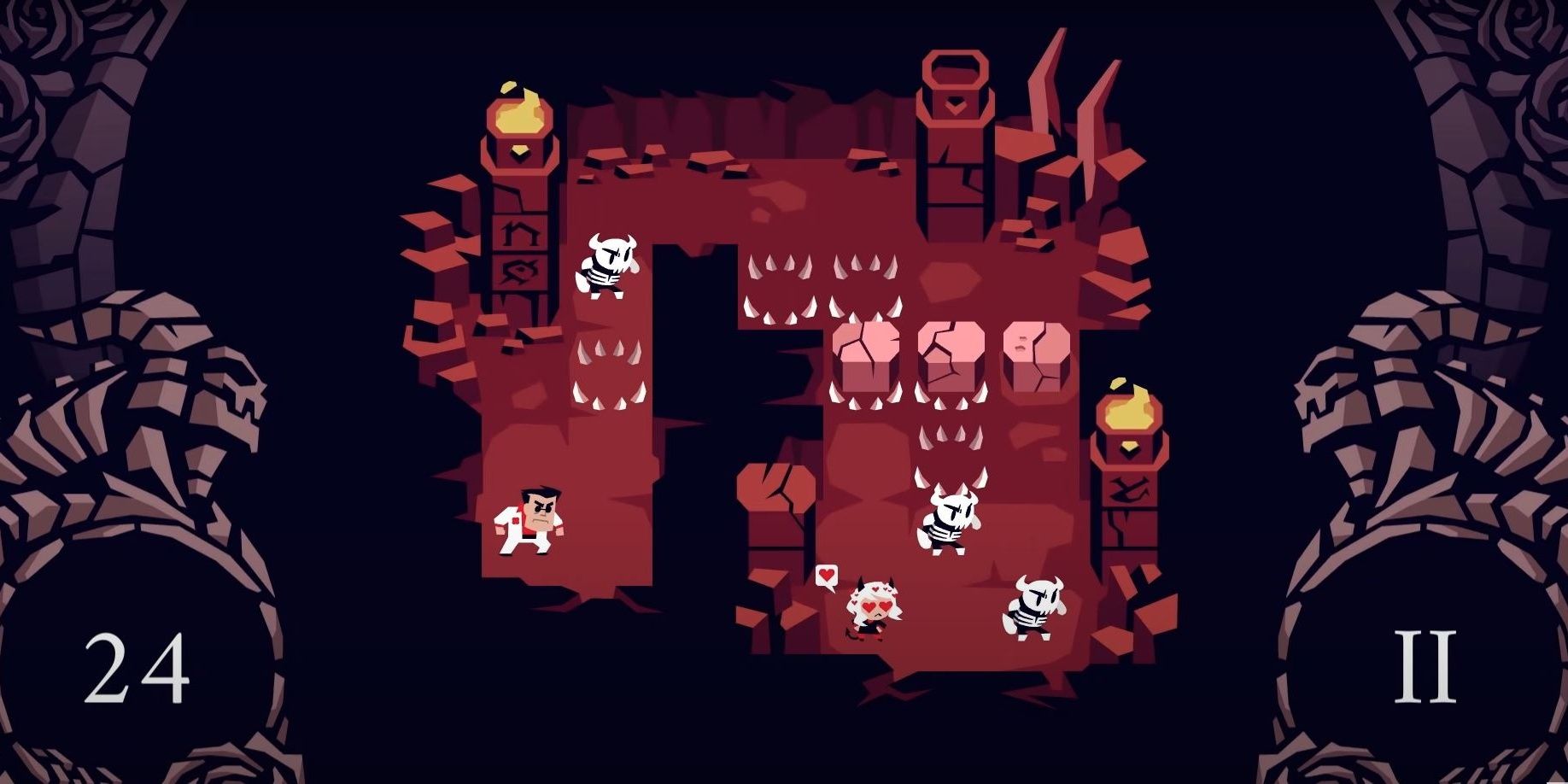 Modeus, the Lustful Demon is your next target and her stage introduces the spike traps that will reduce your movement number by one for every time you step on their space.

Run straight through the first trap and kill the skeleton just like you did to the one in the first chapter.

With him out of your way, go through the top right spike trap and kick the right block as far down as it will go, then head straight left and down until you reach Modeus.

To make this sin a little less deadly, tell her you’re busy gathering girls to move on to the next chapter. 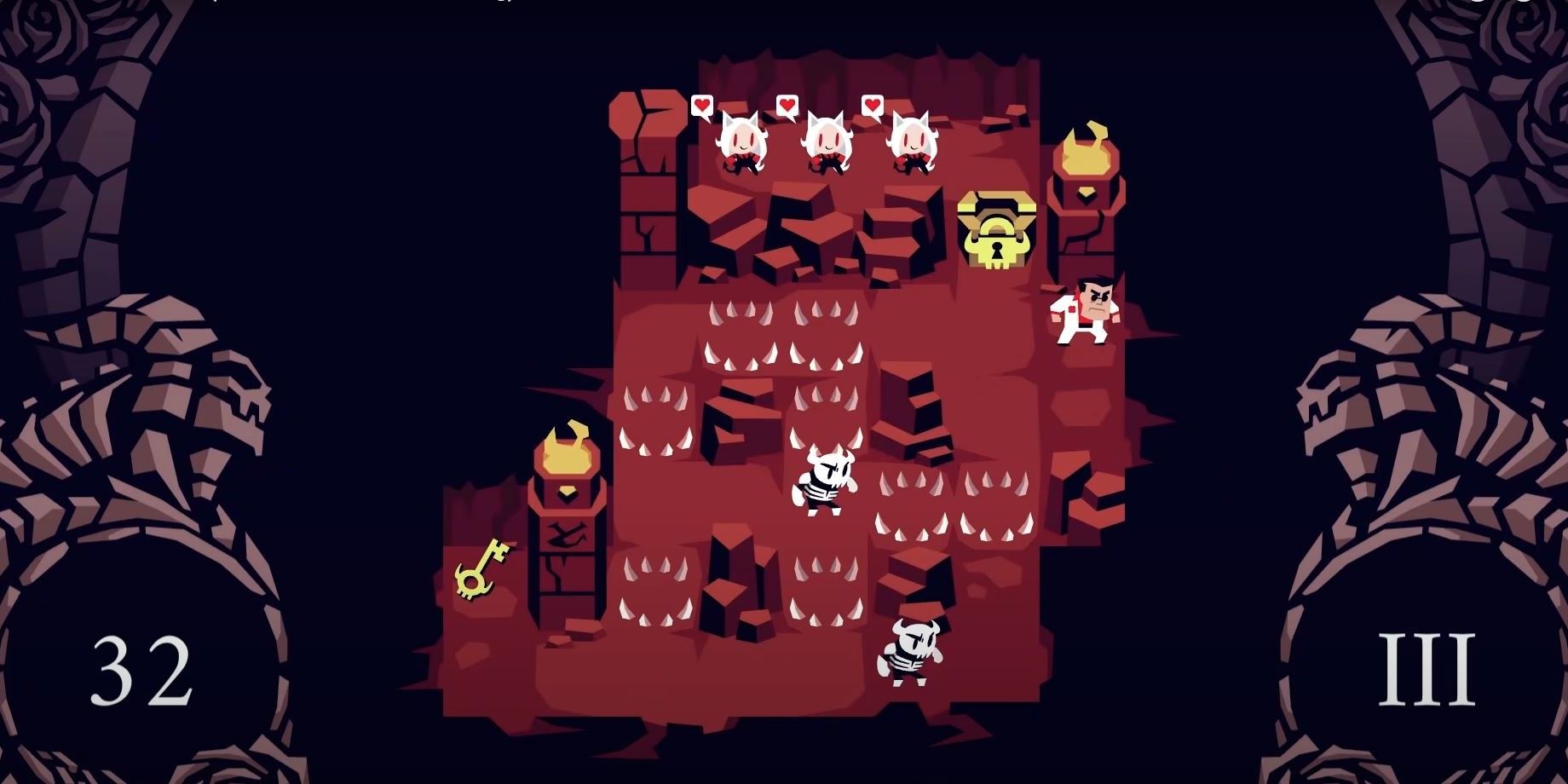 Your goal here is to tame all three heads of the Cerberus triplets. No blocks here, but you’ll have to wade through skeletons, traps, and a lock.

To find the key, head all the way left, all the way down, and left and up to release the lock.

Then simply head straight right and straight up to collect your third demon girl. Needless to say, you should let them all come with you, no questions asked. 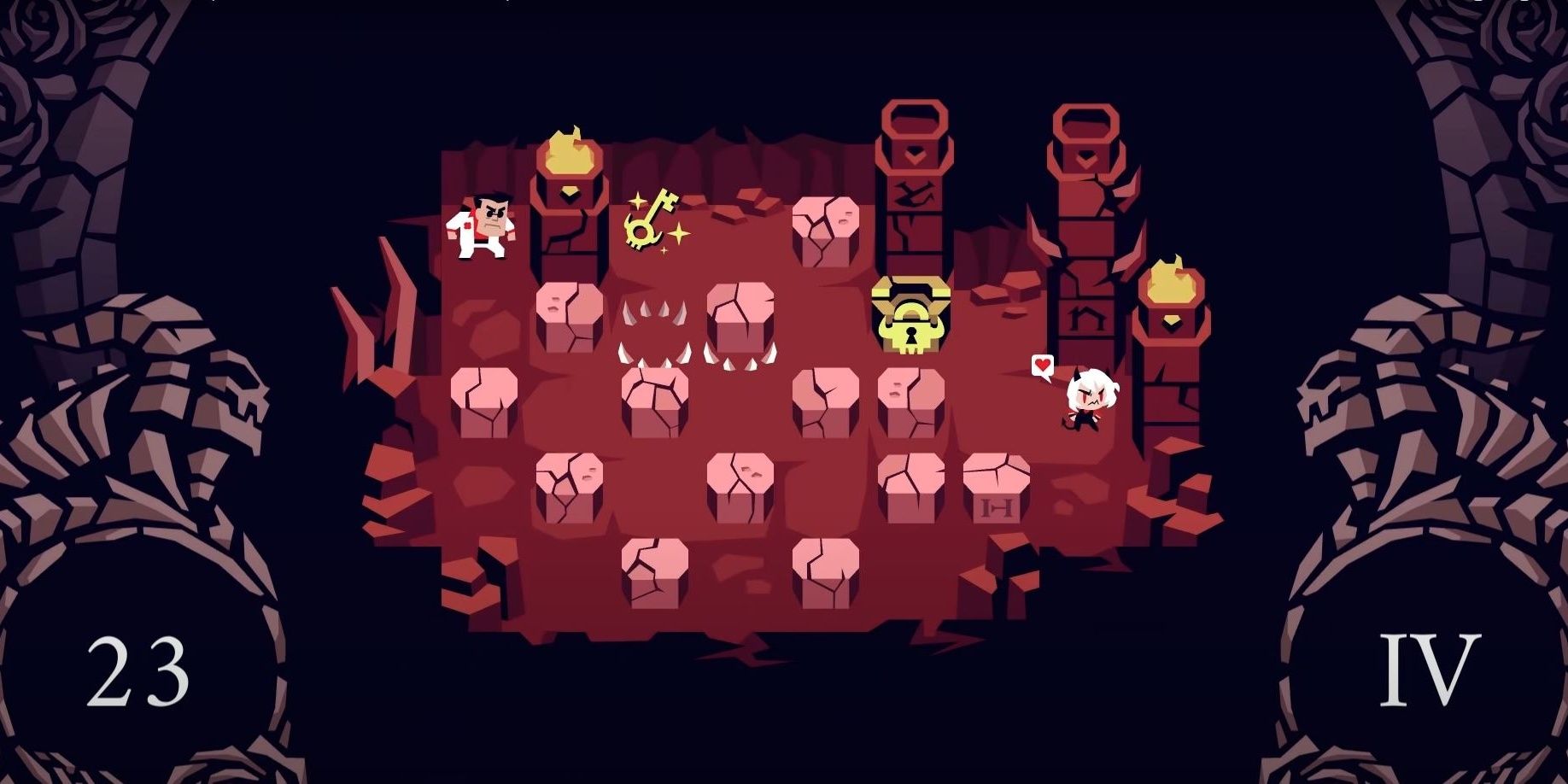 Malina the Sour Demon stands at the end of a corridor of blocks and spikes, plus another lock and collectible you may miss even if you clear the stage.

Kick the block right in front of you downwards, then go right and you’ll have another block below you that you need to kick down.

This is where the game starts getting tricky. Kick the block above you upwards, closing you off from the key; you don’t need it.

Then go up and kick the block under the lock to the right before moving right yourself and kick the block below you. Go down and you’ll have a block with an unusual marking to your immediate right. Kick it to reveal an ancient inscription, collect it, then kick the block above you and go up to meet Malina.

All you need to do now is remember that you need to invite her to play turn-based strategy games with you in order to turn this sourpuss sweet. 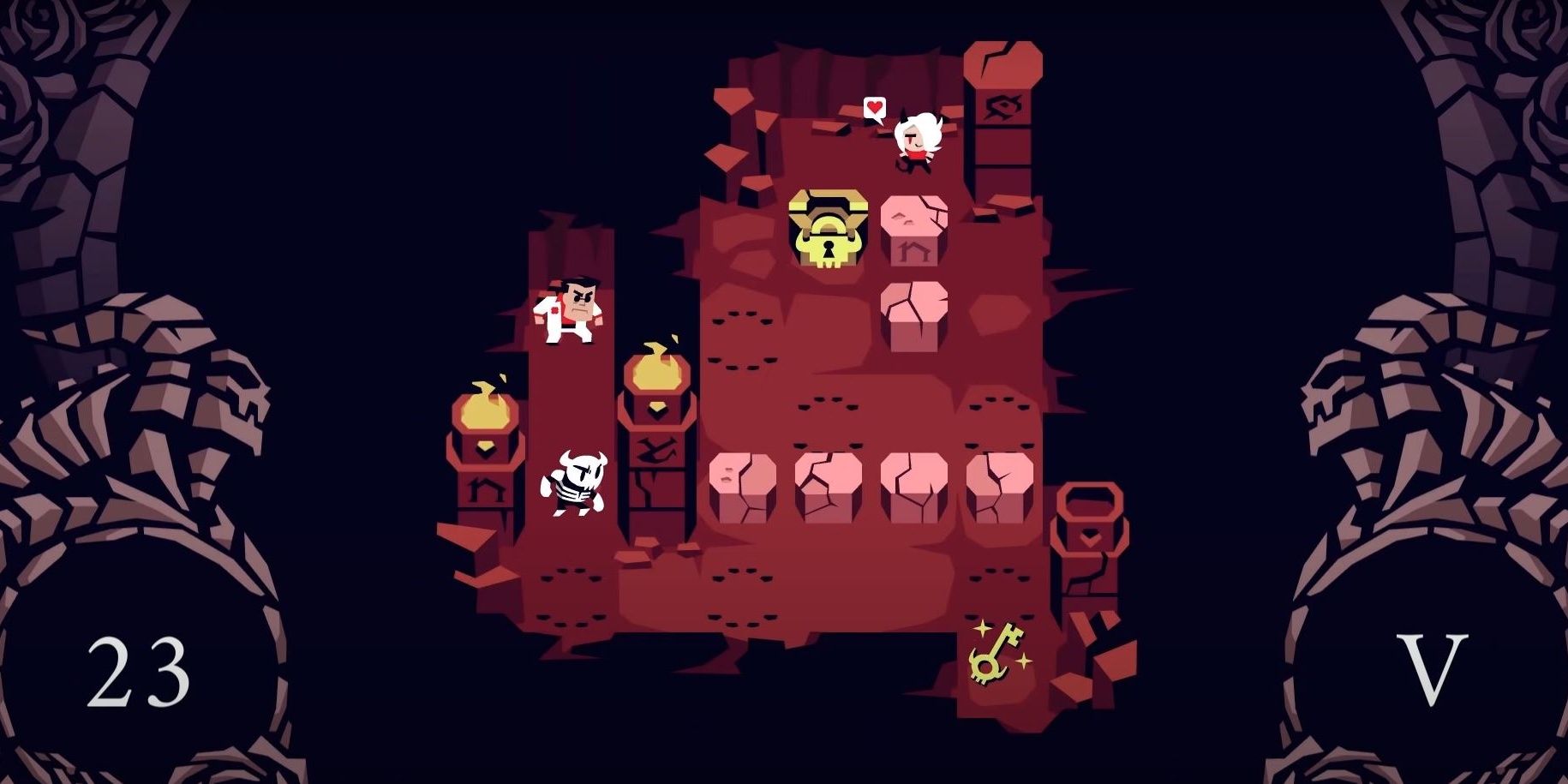 If you thought Cerberus was the bitch demon you were wrong, as that distinction belongs to Chapter 5’s Zdrada. Her stage introduces spike traps that lower and raise each time you move.

Head straight down, kicking the first skeleton into the spike trap to kill him. Then go all the way to the right, but be sure to kick the block above you before grabbing the key beneath you to make maneuvering through the traps easier.

Move straight up after getting the key kicking the block from earlier up one more space and then kick the block to your left. It won’t budge since it’s up against other blocks, but it will make sure all the traps will be lowered when you go over them.

Head up once more and then left until you’re below the lock, and go through to make Zdrada yours. Before you do that though, make sure to kick the specially marked block to the right to collect another inscription, then play hard to get with Zdrada to convince her to stick with you. 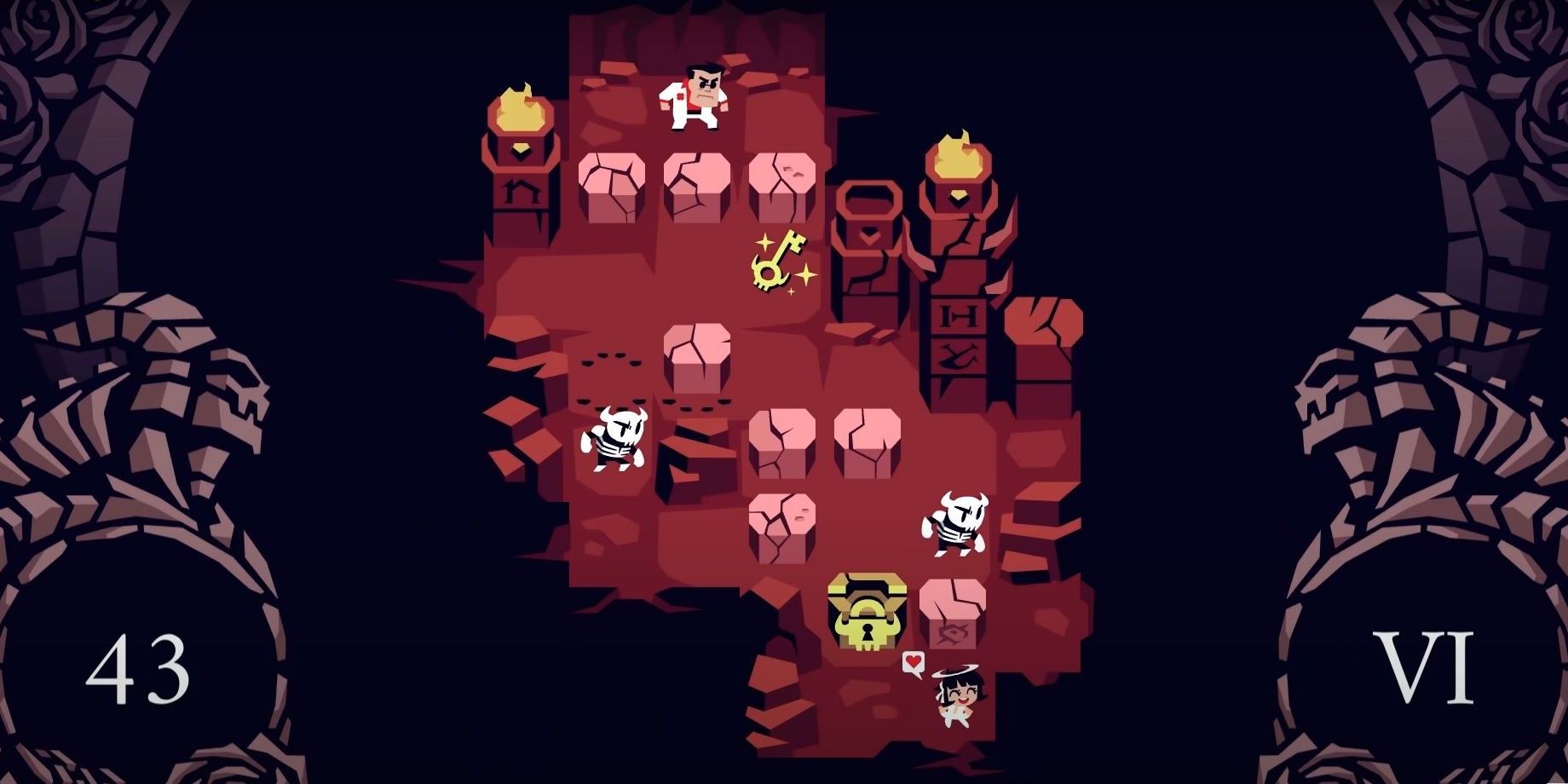 In a hellish twist of fate, you’ll be trying to get Azazel the Curious Angel to fall (for you) in this chapter, rather than any demons.

Kick both the left and right blocks in the starting area downwards, then knock the one in the center to the left. Kick the other left block you kicked down before to the left, then head down and kick the skeleton to be officially out of the starting area.

Kick the block to your right all the way to the right wall and you’ll be right below the block that’s covering the key. Kick the block and grab the key before moving on.

Remember to hit that marked block for the ancient inscription and don’t tell Azazel you’re looking for angels or you’ll be seeing many more very soon. 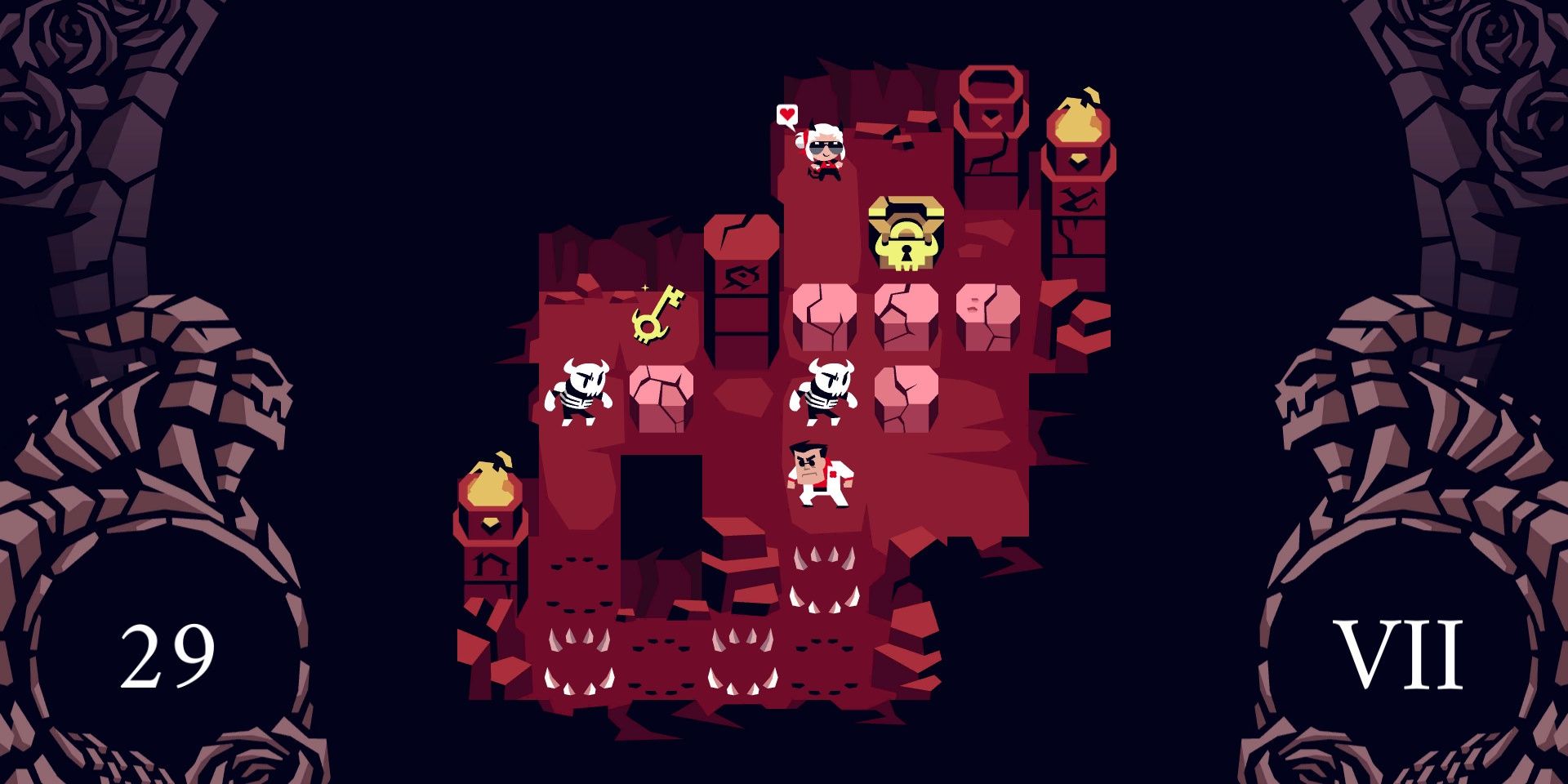 Justice is blind, at least you’d assume so considering she always wears large sunglasses. To get to the self-titled Awesome Demon, start by kicking the block right above where you spawn, then go back down and to the left so you can kick the skeleton that will be above you.

With him out of the way, kick the block that was to his right towards the wall and go through the corridor of spike traps to get to the key.

Before you pick it up you’ll have to kick a skeleton out of your way, but don’t kill him. Instead, take the key by kicking the block to your right then grab the key and keep pushing that block until it hits the one from before.

You’ll now be faced by a whole mess of blocks, but simply kick the one above you and the one below the lock to add Justice to your harem. You’ll just have to lie and tell her you skipped the puzzle to do so. 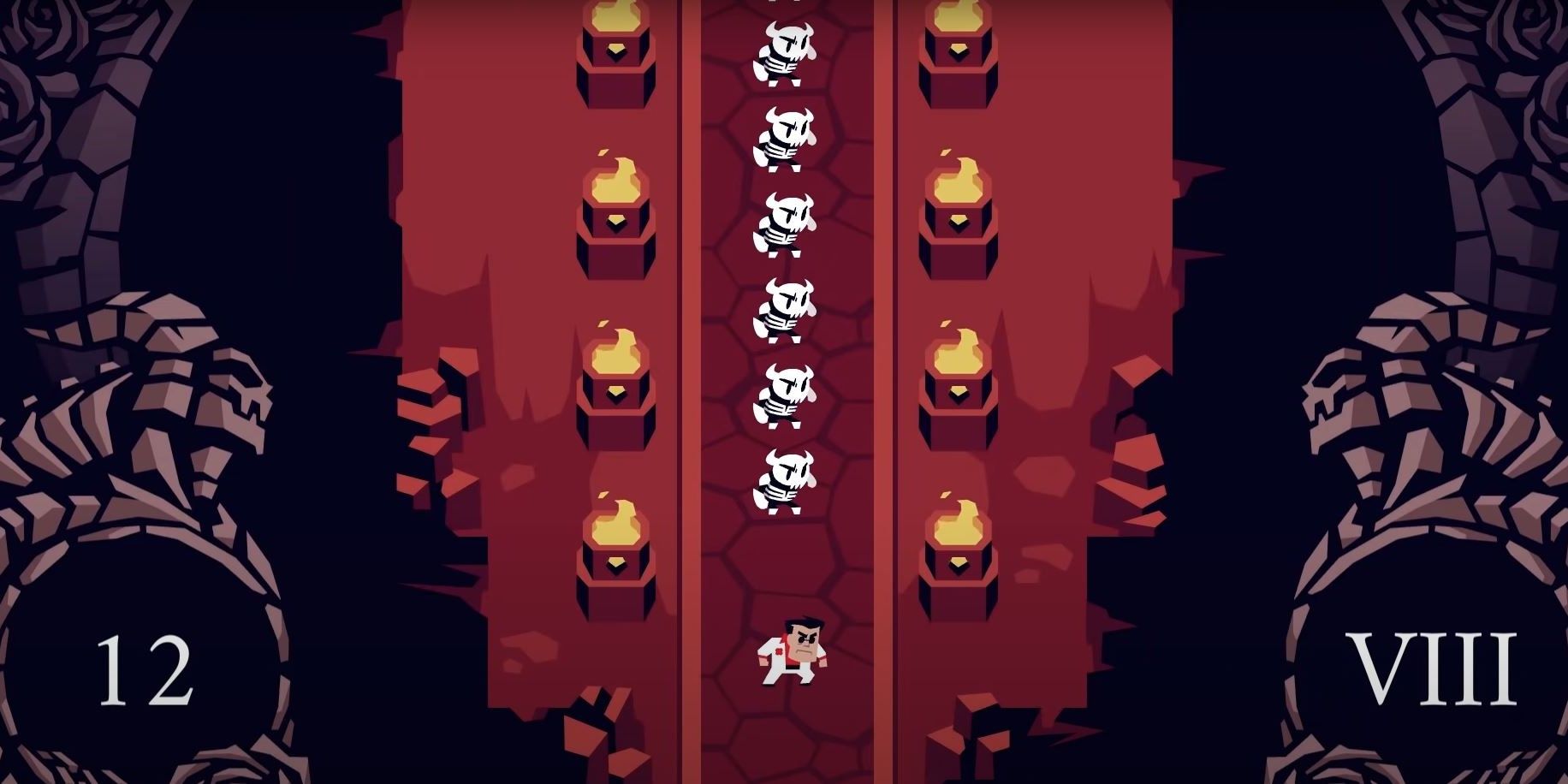 Corporate work is a lot like hell, which probably explains Helltaker’s decision to portray the underworld as that sort of environment. The good news is you’re just about to seize the CEO of hell’s heart and all that stands in your way is a queue of skeletons. Don’t fight them, just move to either side and then run to the front and kick the one in front of Lucifer’s desk to cut in line.

Just remember you’re here to take her to your domain, not the other way around. It may not seem like the kind of deal a satanic CEO would agree to, but just offer her coffee, video games, and pancakes and she will gladly abandon her institution. More people should try toppling hellish corporations that way. 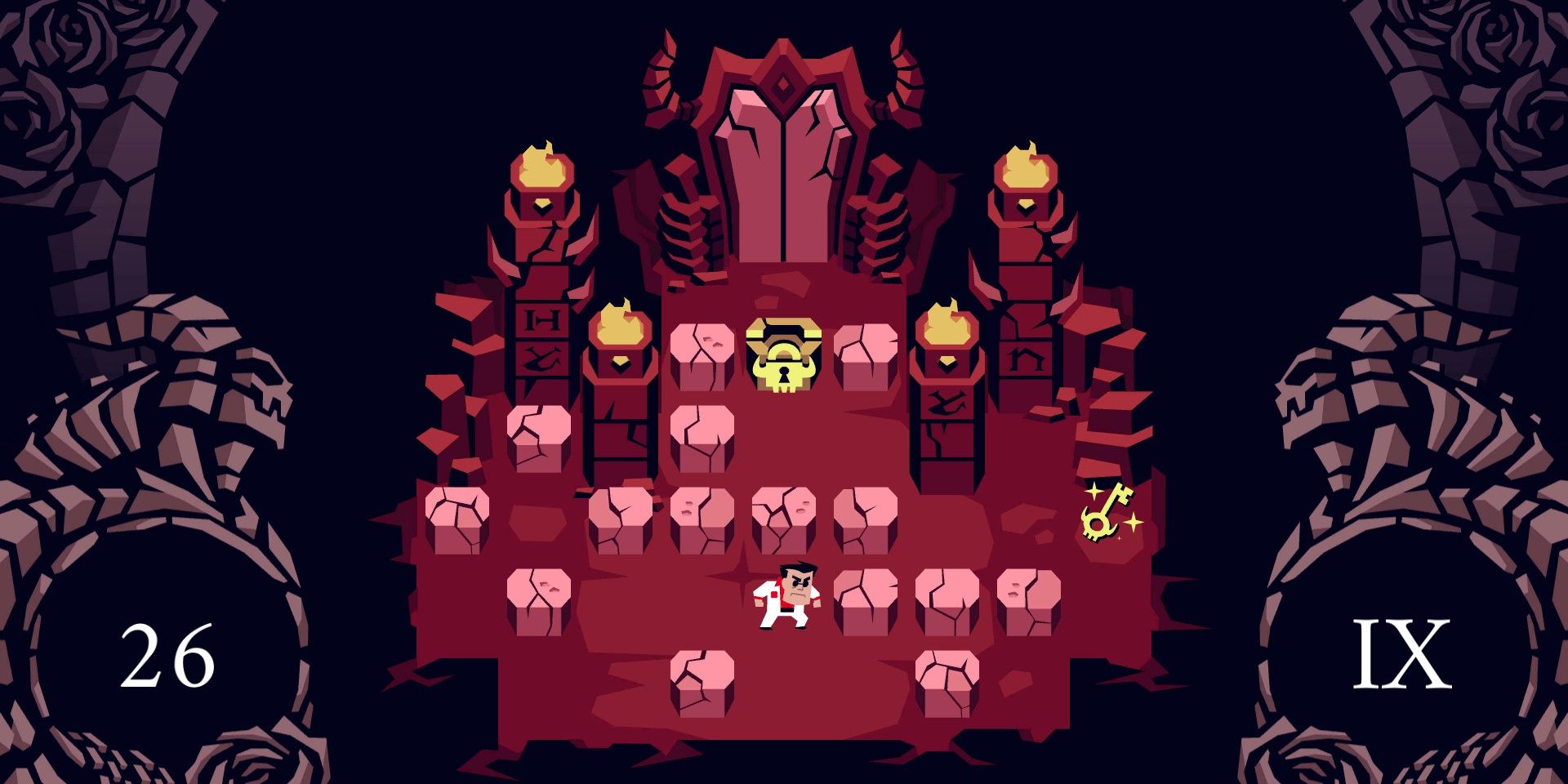 You’re almost out of the underworld now and you only need to take your demon girls back to your pad, so don’t look back.

Move right and up to clear the blocks out of your way, then push the block to your right as far as it will go. There’s another block beneath it too and you’ll want to kick that into the bottom right corner.

Retrace your steps and kick the block above you straight into the lock so you can knock the block that was to its right over two spaces. Kick the block beneath you and then go one square down and to the right to kick the nearby block into the corner, and then kick the one above you into its corner as well, giving you access to the key.

Go straight for the lock while hugging the wall nearest to you, knock the block above you out of the way and you’re clear. 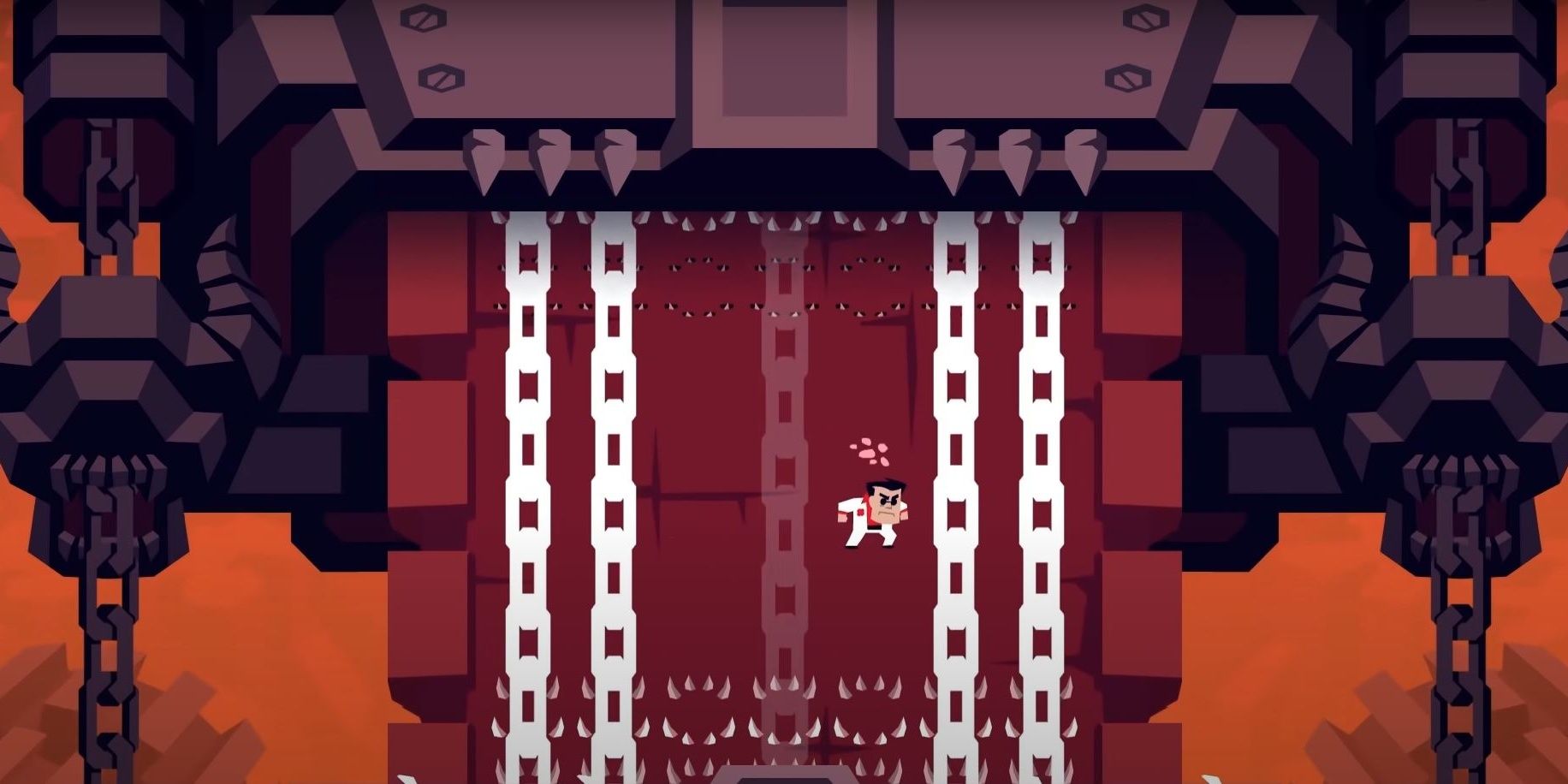 Uh oh! You’ve been caught by Judgement, the High Prosecutor of hell, and have to survive her Sin Machine. This stage shakes up the old formula by playing in real-time and gives you unlimited moves and you’ll want to start by using them to move downwards to avoid getting caught by the spikes that will be both above and below you.

Chains will start to appear next, first translucent to indicate where they will be and then white when they fully manifest. Avoid these. The trick is to watch out for the translucent flashes, but stay as close to the middle of the screen as you can manage, or else you’re liable to get cornered and die.

There’s no one perfect way to do this, but you can take four hits before dying so as long as you stay on the move and don’t get backed up against a wall, it should be one of the game’s easiest challenges.

The conveyor belt will then be stopped by two large chains on opposite sides which you must kick repeatedly to destroy while still avoiding the regular chains. Rinse and repeat four times and you’ve got a clean getaway while recruiting Judgement to the harem. Just don’t go slagging off your other girls in the process or you’ll be sorry. 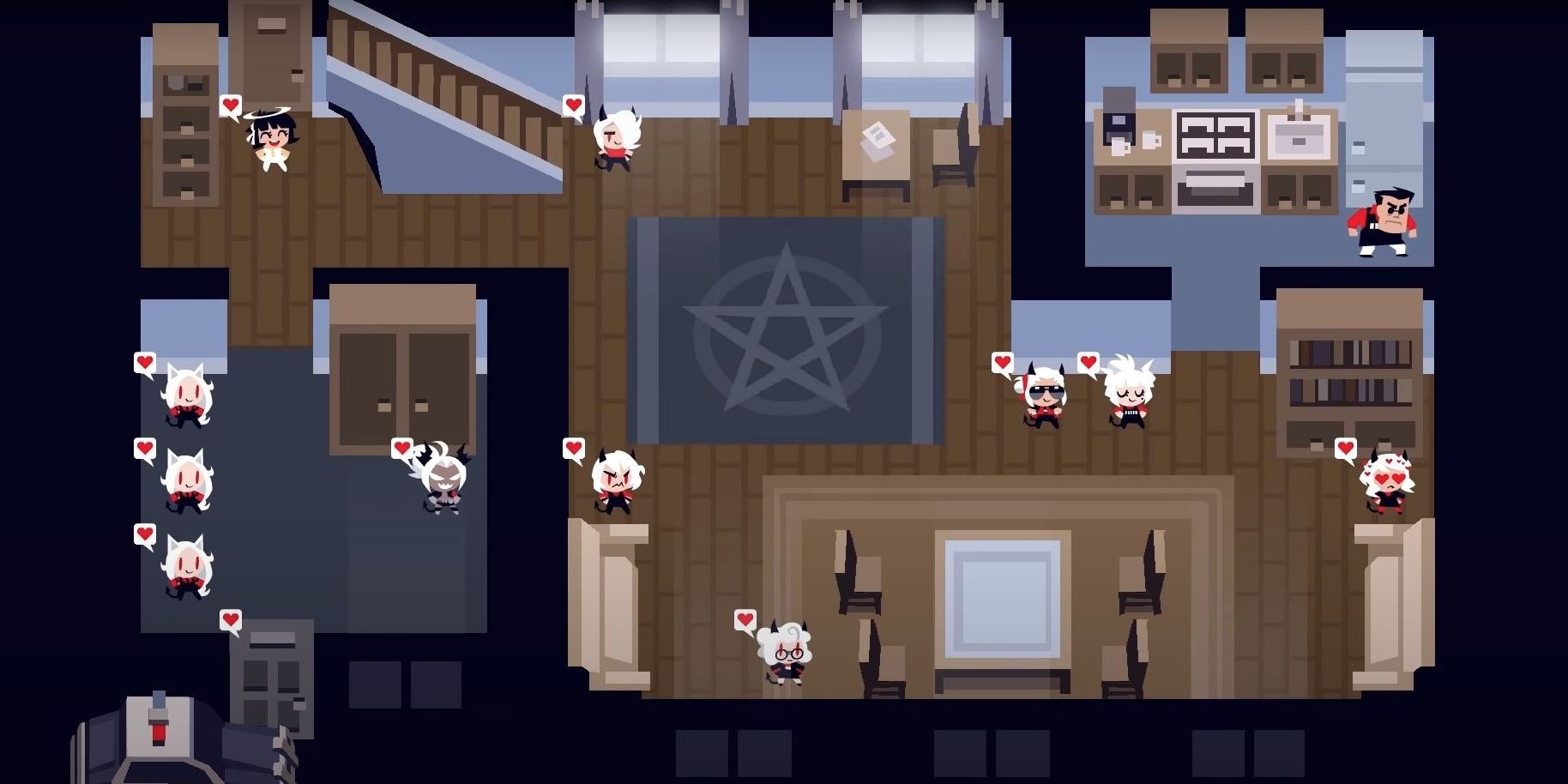 With all that behind you, you’re finally free to live with this trove of sadistic, torture-happy demons for the rest of your sad, sad life. You can serve them all pancakes though, so that’s nice. The cops will have some questions too, but that’s nothing a little extra breakfast baking can’t fix.

But wait, there’s more! Since you found all the ancient inscriptions, you’ve unlocked the secret ending. It’ll seem like the same denouement at first, but you’ll find a rug with a pentagram in your living room. If you move down, up, right, up, left, down, down, left, up, down, right, and up you’ll open a portal. Walk through it to get the final ending and the final girl.