Every class in Hearthstone is unique, which makes picking up a new profession equal parts exciting and daunting. Sure they all use similar mechanics, but how each class pushes certain mechanics over others, and how they play on the board differ drastically. If you want spell-slinging control, then you’d probably turn to the Mage.

The Mage has had a long history of being fairly great. Sure, every class has had its time in the spotlight at one point or another, but the Mage has always felt pretty darn strong thanks to its wide array of spells and tricky minions. Getting started with Mage, despite it being the first class you unlock, isn’t easy, however. So we’ve compiled some of the best cards the class has to offer right now.

There are way too many cards to list here, so we have picked a diverse selection of Spells, Effects, Minions, and Rarities. We will NOT be including Volatile Skeleton in this list purely because Volatile Skeleton appears on so many other cards. It’s a great minion, but we wanted to avoid having too much redundancy. 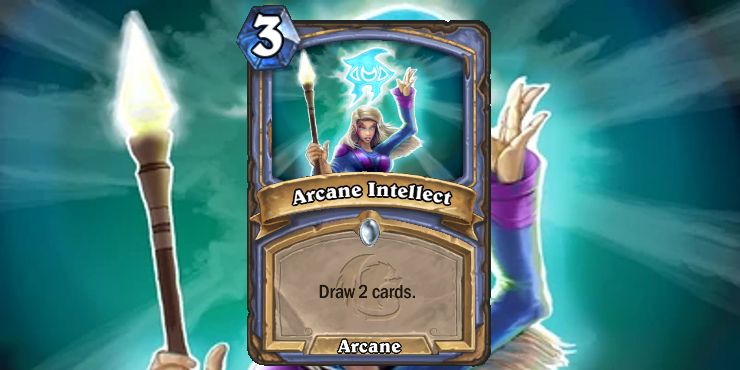 Arcane Intellect is one of the earliest cards a Mage will gain access to, and it is one of the best. It is a classic card that has existed since the dawn of the game, and it's not really showing any signs of slowing down. It’s as much of a ‘must-take’ nowadays, but its power to draw cards for a low price is always worth considering. This card can also gain value simply by being a Spell, which many Mage cards combo with innately. 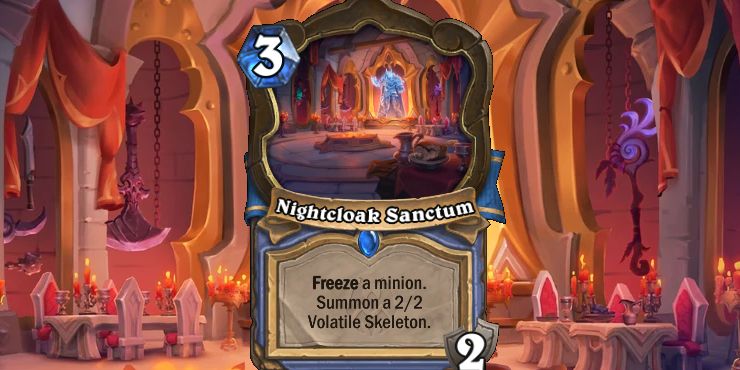 Locations are fairly new to Hearthstone and come with a bunch of unique effects and interactions that change up the game nicely. Not all Locations are worth taking, but the Mage definitely got the good end of the bargain. The Nightcloak Sanctum brings everything you want in a reusable, indestructible card. You gain CC and build board presence. Heck, not only that, the minion you summon is pretty dan top-tier in its own right. 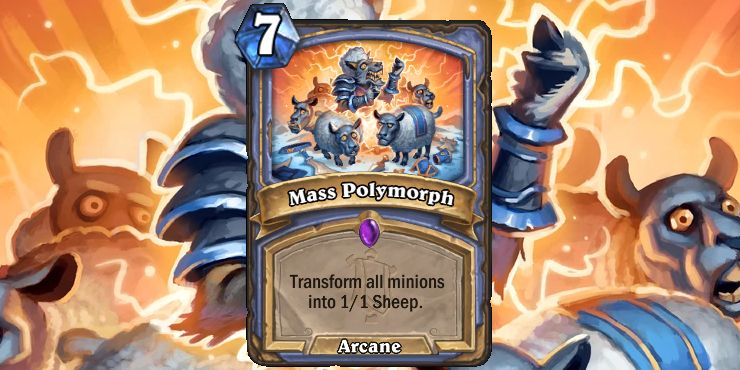 Sometimes you just need to reset the board and try again. Things go wrong in Hearthstone all the time, and having a tool that turns everything into a sheep (even your minions) can quite literally be a lifesaver. You remove powerful effects and beefy statlines, whilst also having the opportunity to start clawing back control. The fact sheep are 1/1 minions also plays into your favour as Mages have many ways to deal with low Health enemies on mass. 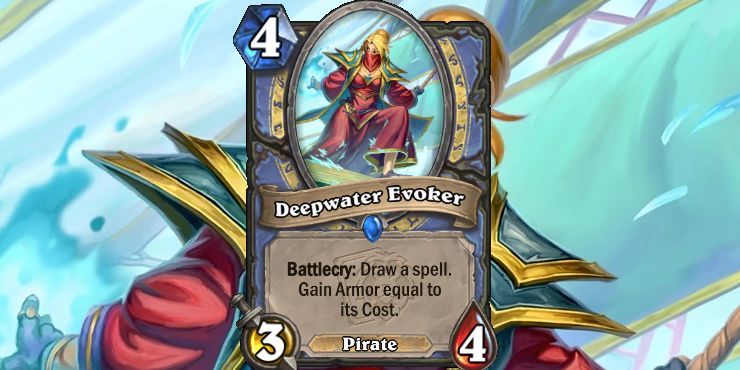 Card draw is one of the most powerful effects in Hearthstone – and it always has been. The ability to play a card and then replace that card in hand to maintain tempo in later turns is way too good to pass up. The thing is, card draws are random. Deepwater Evoker removes some randomness by only drawing Spell cards. Since you’ve built your deck, you know what Spell cards you can pull, so you have a fairly good idea of what to expect. Not only that, but the secondary effect is very nice for staying alive. 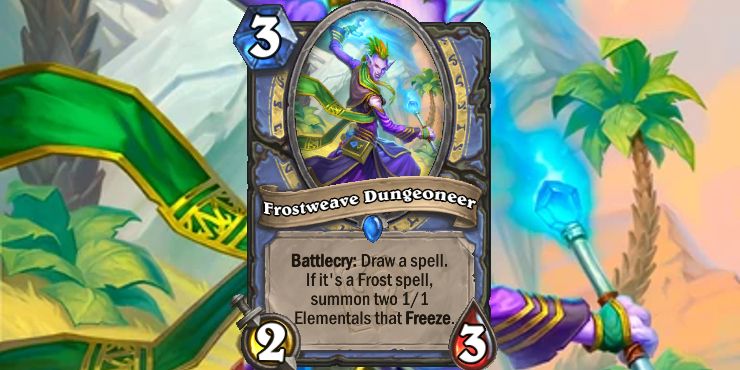 Similar to Deepwater Evoker, Frostweave Dungeoneer has a very similar effect. You draw a card, it will always be a Spell. The value here cannot be overstated even if you don’t trigger its second effect – which for the record, is really good too. Frostweave Dungeoneer has the potential to put a lot of tricky-to-deal-with bodies on the board, cycle itself, and be a decently chunky presence by virtue of existing. Great early game card. 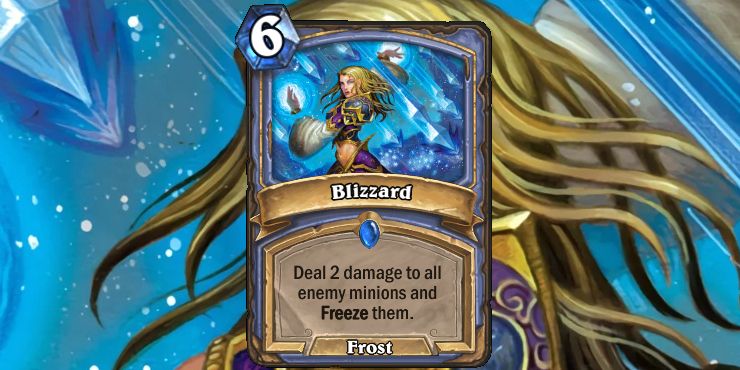 Another fantastic classic card that has seen play for most of the Mage’s existence. Blizzard is a very simple card that basically delays your opponent. You cast it, you deal a chunk of AOE damage, and in most cases, your opponent can’t do anything for an entire turn due to the Freeze effect. Having two Blizzards in your deck doubles this delay. We very rarely leave home without this staple card. 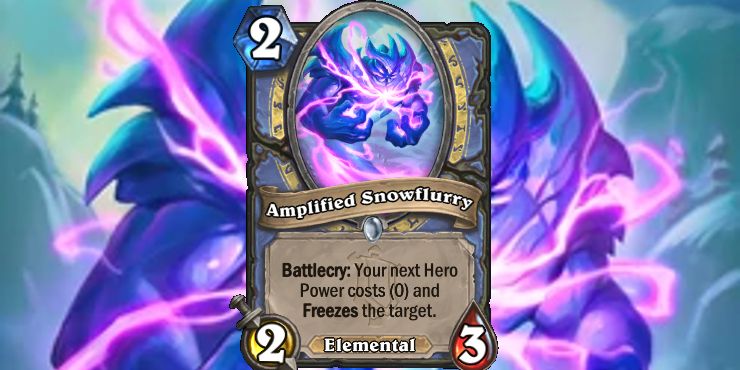 Amplified Snowflurry is value incarnate. There is very little reason to not take this card in every deck. It's cheap to cast at one 2 Mana, and it has a decent statline. The value comes from its ability to let you use your Hero Power for FREE that turn and give it Freeze. This card is incredible. Bearing in mind that the Hero Power unaugmented costs the same as Amplified Snowflurry, you are getting a minion, a buff, and a Hero Power all at once. 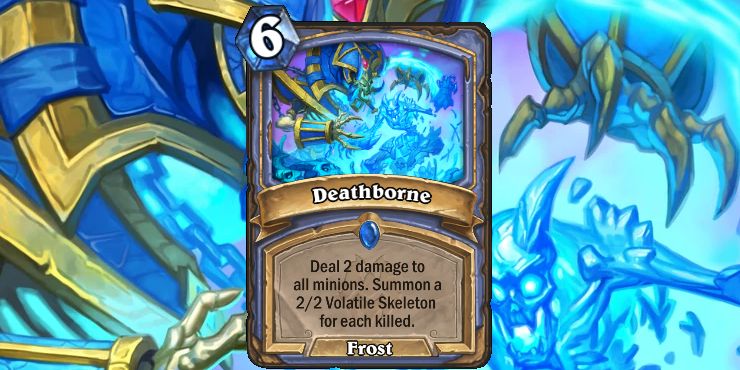 Deathborne is always good but often ends up being incredible. It's an expensive card (on par with Blizzard) and deals decent AOE damage. The downside is that it hurts your minions. The upside? Volatile Skeletons. Deathborne can be a real equaliser as you can clear the board (or some of it) and then refresh your side with powerful minions. Sure Volatile Skeleton doesn’t have the best stats, but its Deathrattle is very nice. It’s especially good as a follow-up to something like Mass Polymorph.

You could also use Deathborne and combo it into another Deathborne in some cases to summon Volatile Skeletons, kill all of them, trigger all of their Deathrattles, and then summon them all back. 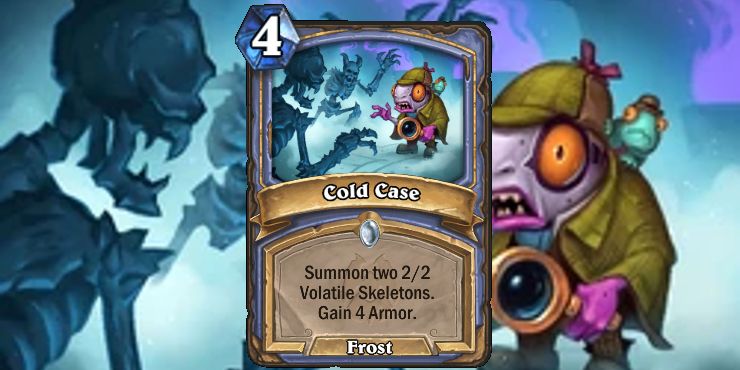 Cold Case is another card that excels due to its incredible value. Volatile Skeleton often makes its way into decks as a standalone card. This is because it's pretty good for its cost. Well, for 2x the cost of a Volatile Skeleton you can summon two Volatile Skeletons and gain Armour. There is nothing special about this card, it’s just good. 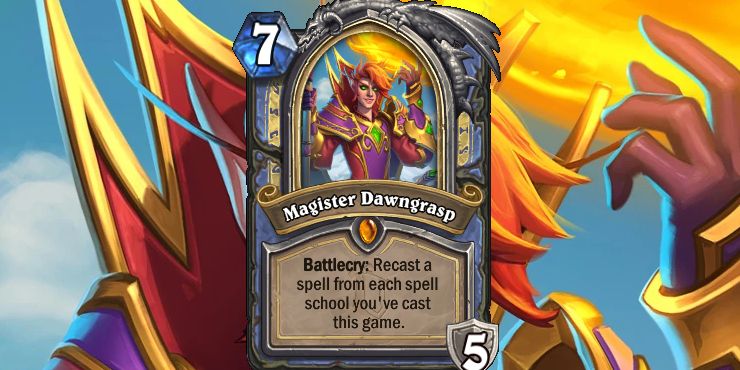 Character cards have been knocking around since the dawn of Hearthstone, but they’ve often been a little bit slow and fairly expensive. Magister Dawngrasp is not one of those. In fact, Magister Dawngrasp is one of the best cards the Mage has access to. On summon, you cast a random selection of spells from schools you have cast from this game, and then you get a new Hero Power.

At base, this Hero Power is 2x stronger than your standard Hero Power. That’s already great value. Where it shines, however, is in its ability to grow stronger if you kill minions. This scales indefinitely turning your Hero Power into a force of nature if you are allowed to buff yourself. You can even kill your own minions to gain the benefit, which is not a bad idea if you have a bunch of Volatile Skeletons lying around (which is not unlikely in a Mage deck).