Home » News » Hearthstone 16.4 Patch: Everything You Need To Know About Dragon Minions & The New Battlegrounds Heroes

Hearthstone 16.4 Patch: Everything You Need To Know About Dragon Minions & The New Battlegrounds Heroes

Dragons have invaded the Battlegrounds in Hearthstone patch 16.4, giving players a whole new way to dominate their opponents and rise to the top in the auto-battler. In total, eighteen new minions have been added to the mode, twelve of which belong to the Dragon tribe and will make for great synergy.

To mark the event, Blizzard temporarily activated Twitch drops, which rewards viewers with card packs for watching Hearthstone streams. The event has already ended, since it often only occurs for a few days at a time, but readers should take the time to link their Twitch.tv and Battle.net accounts to be ready for future events. 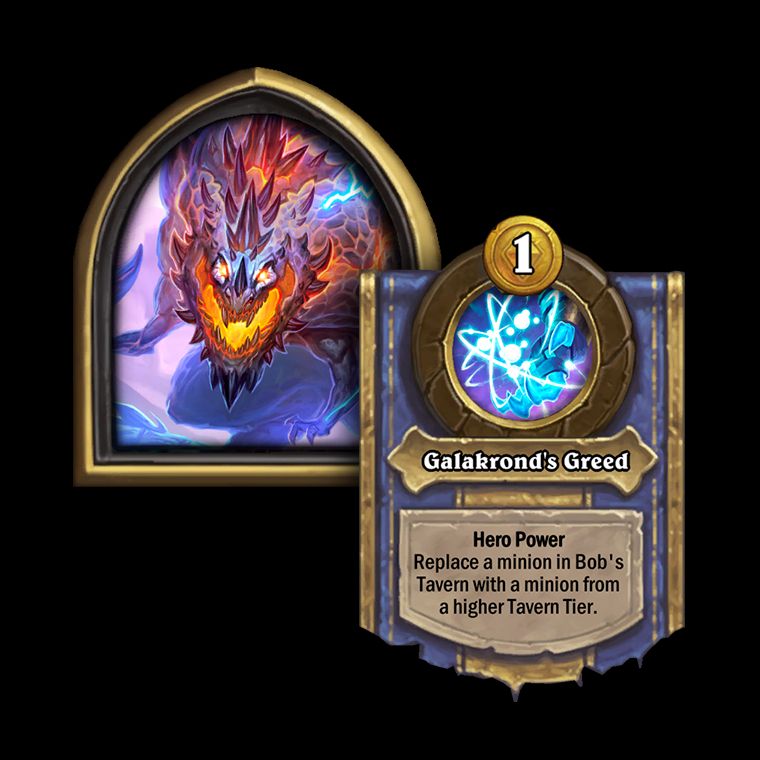 Dragon Heroes are back in force for the Battlegrounds and look to make use of the synergy that comes with so many new Dragon type minions. For starters, Galakrond’s ability reads, “Galakrond’s Greed [Cost 1]: Replace a minion in Bob’s Tavern with a minion from a higher Tavern Tier.” On the surface, this appears to be an inferior version of Toki’s ability, however the minion can be frozen and upgraded on each turn. In theory, this can lead to some strong swing turns, but it requires some strategy. 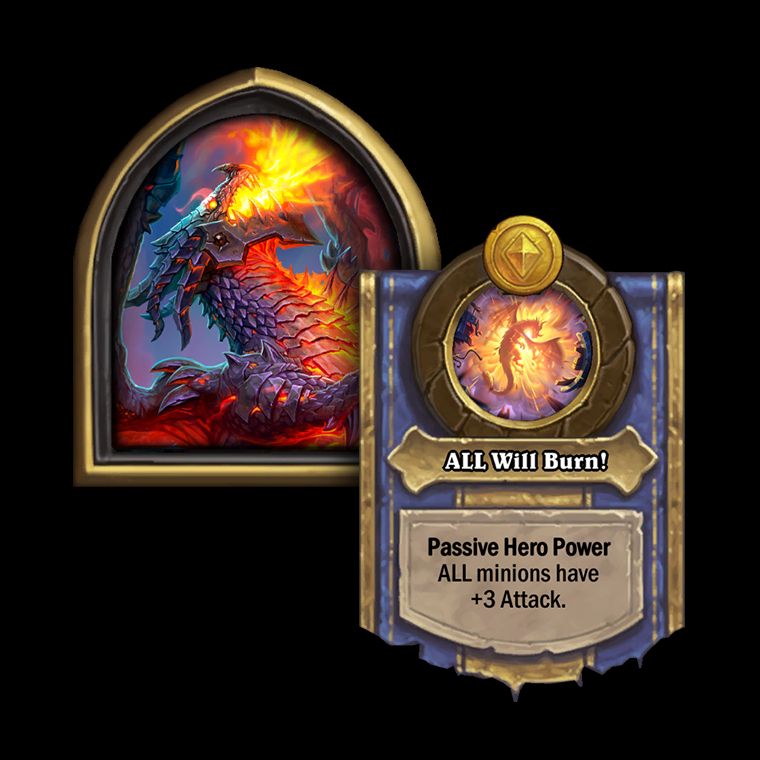 Deathwing’s ability reads, “ALL Will Burn! [Passive]: ALL minions have +3 Attack.” The immediate strength of this ability seems to lie in the use of token generators and divine shield minions. In the midgame, this would work great with Hydra minions, and in the late game, with the Foe Reaper 4000. Ultimately, the strength of this ability will depend on what types of minions one can pick up towards the mid and late game. 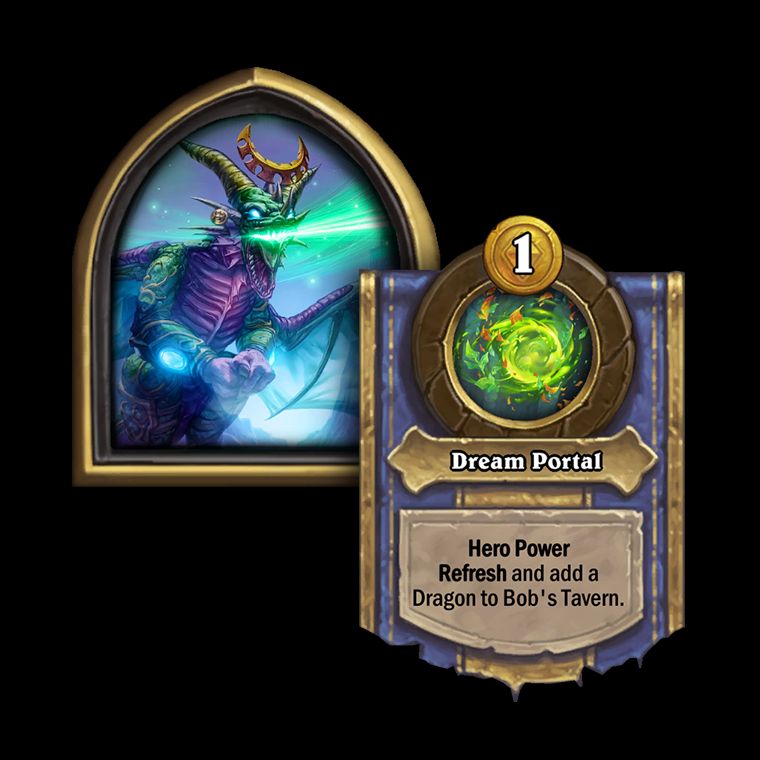 Ysera’s ability reads, “Dream Portal [Cost 1]: Refresh and add a Dragon to Bob’s Tavern.” It is yet to be seen how strong this ability is in the Battlegrounds, but it is without a doubt the best in terms of flavor and for building the Dragon dream team. 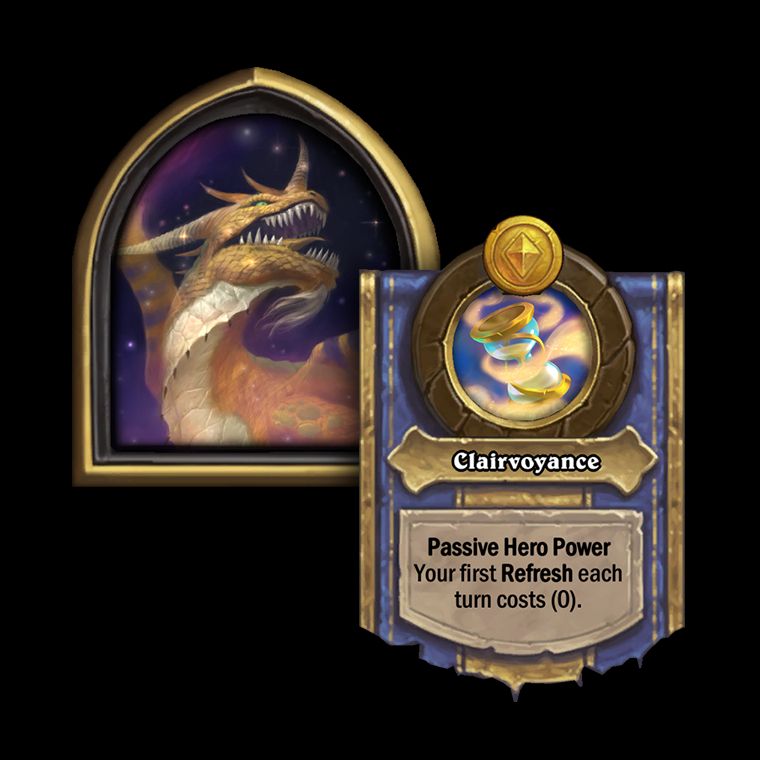 Nozdormu’s ability reads, “Clairvoyance [Passive]: Your first Refresh each turn costs (0).” Here is another hero that could be incredibly powerful thanks to the potential to find great minions over the course of the game on the surface, but with no other benefit outside of a small savings each turn, each game is highly dependent on what appears in the Tavern and its Refresh. 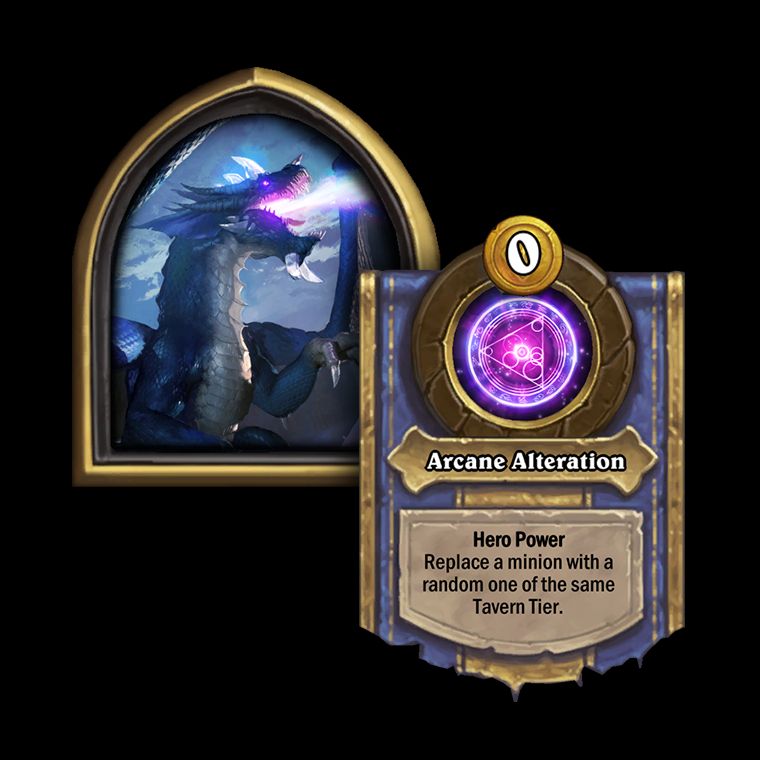 Maygos’ ability reads, “Arcane Alteration [Cost 0]: Replace a minion with a random one of the same Tavern Tier.” This is one of the more interesting abilities in its execution. If the ability were only limited to the board, or to the Tavern, it would still be useful, but instead, players can do both. Of course, “random” in Hearthstone is not always a good thing, and the benefit of such an ability will vary and be affected directly by the minions available in each Tavern Tier. Sometimes, the odds will highly favor a big upgrade, while other times it may leave your board at a disadvantage. 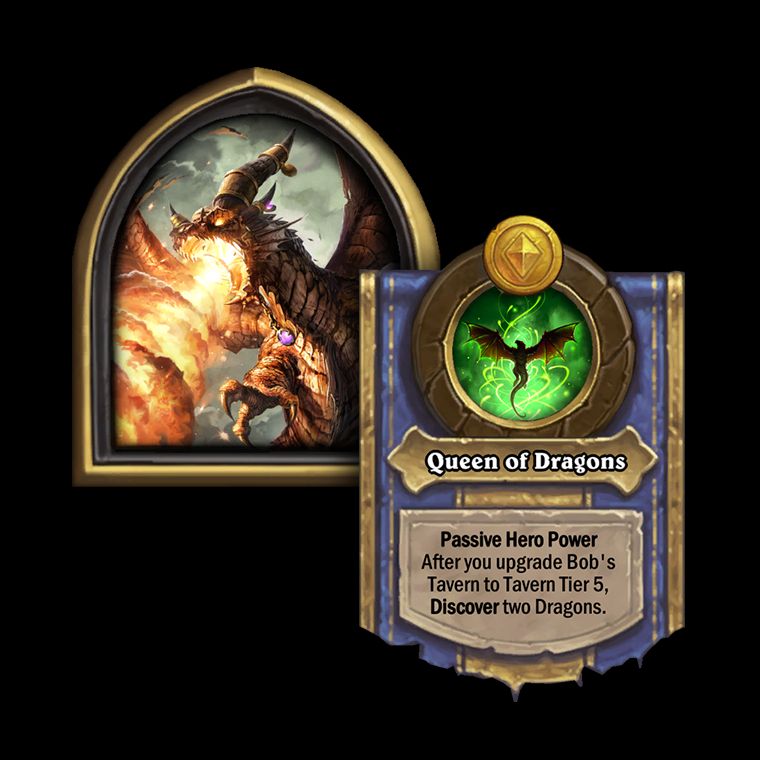 Alexstrasza’s ability reads, “Queen of Dragons [Passive]: After you upgrade Bob’s Tavern to Tavern Tier 5, Discover two Dragons.” This is clearly meant to reward long-term focus and could potentially provide a massive power spike, while also encouraging players to strive for Dragon tribe synergy. Since meeting the condition of her passive will automatically provide two Dragons, which can be discovered and reduces the odds of a single bad RNG pull, Alexstrasza seems poised to be the best option for creating a strong team of Dragon minions. 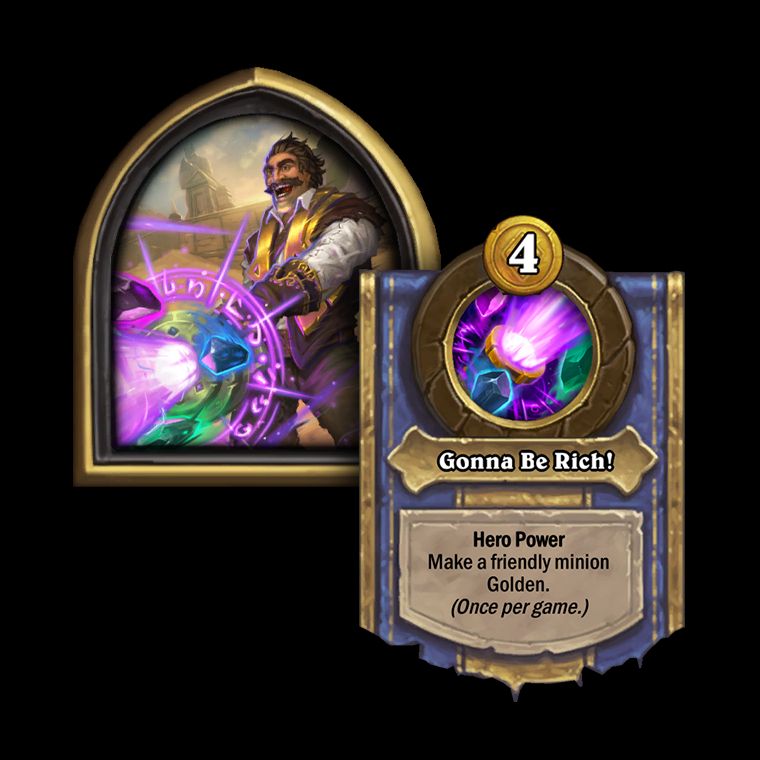 Reno’s ability is by far the most interesting, reading, “Gonna Be Rich! [Cost 4]: Make a friendly minion Golden (Once per game).” Such an ability can lead to a massive board swing and is tremendously powerful, which is why it can only be used once per entire game. We need to be clear on this: it is not once per minion, but once — and that’s it. Similar to other Heroes that excel in the late game, players who use Reno will need to play with what is essentially no Hero Power until they find a minion of sufficient quality to merit using this once-per-game ability. 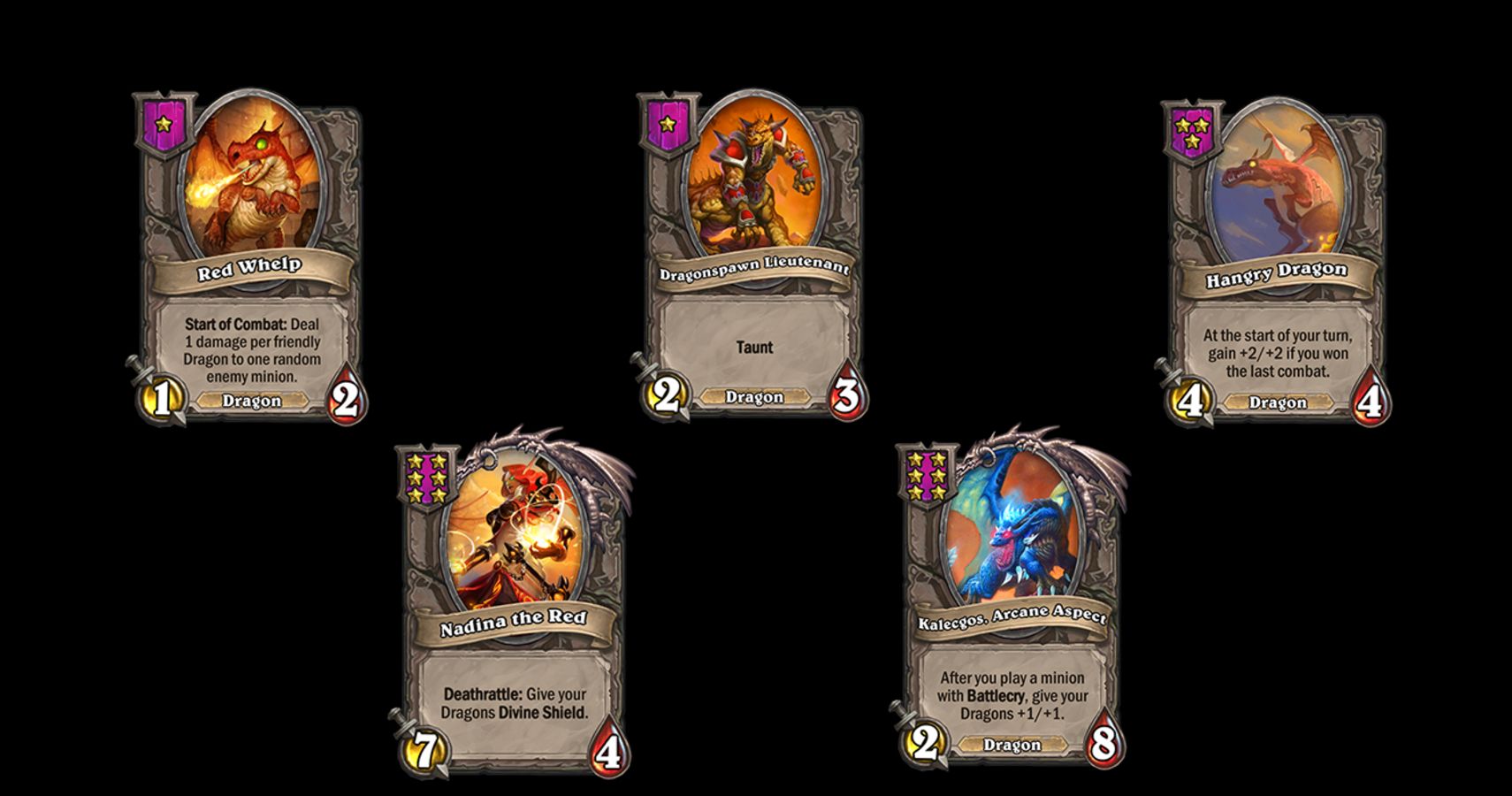 In total, there are eighteen new minions to choose from in the Battlegrounds. As mentioned, the focus of this patch is on Dragons and their synergy, so twelve of these new minions carry the Dragon tag or benefit Dragons directly.

The patch comes at a time of celebration. To make the sixth anniversary of Hearthstone, there will be a special event beginning Wednesday, March 4 that includes special Tavern Brawls, a legendary quest line, and as players have come to expect, log-in rewards in the form of packs and the Year of the Dragon card back. Players need only log in between March 4 and March 17 to receive their rewards.