Ghostwire: Tokyo – How To Defeat Okina

Okina is the third boss in Ghostwire: Tokyo. You’ll meet her in the Tokyo Tower area, right at the beginning of Chapter 5: Severance. She’s one of the masked enemies that accompany Hannya, and she’ll become a huge spider called Tsuchigumo (based on a classic Japanese yokai of the same name).

This will be pretty different from all the other battles you had until now. Okina is a bigger enemy than anything that came before, and she has attacks with a wide range. Check this guide to learn everything about Ghostwire: Tokyo's big spider boss. 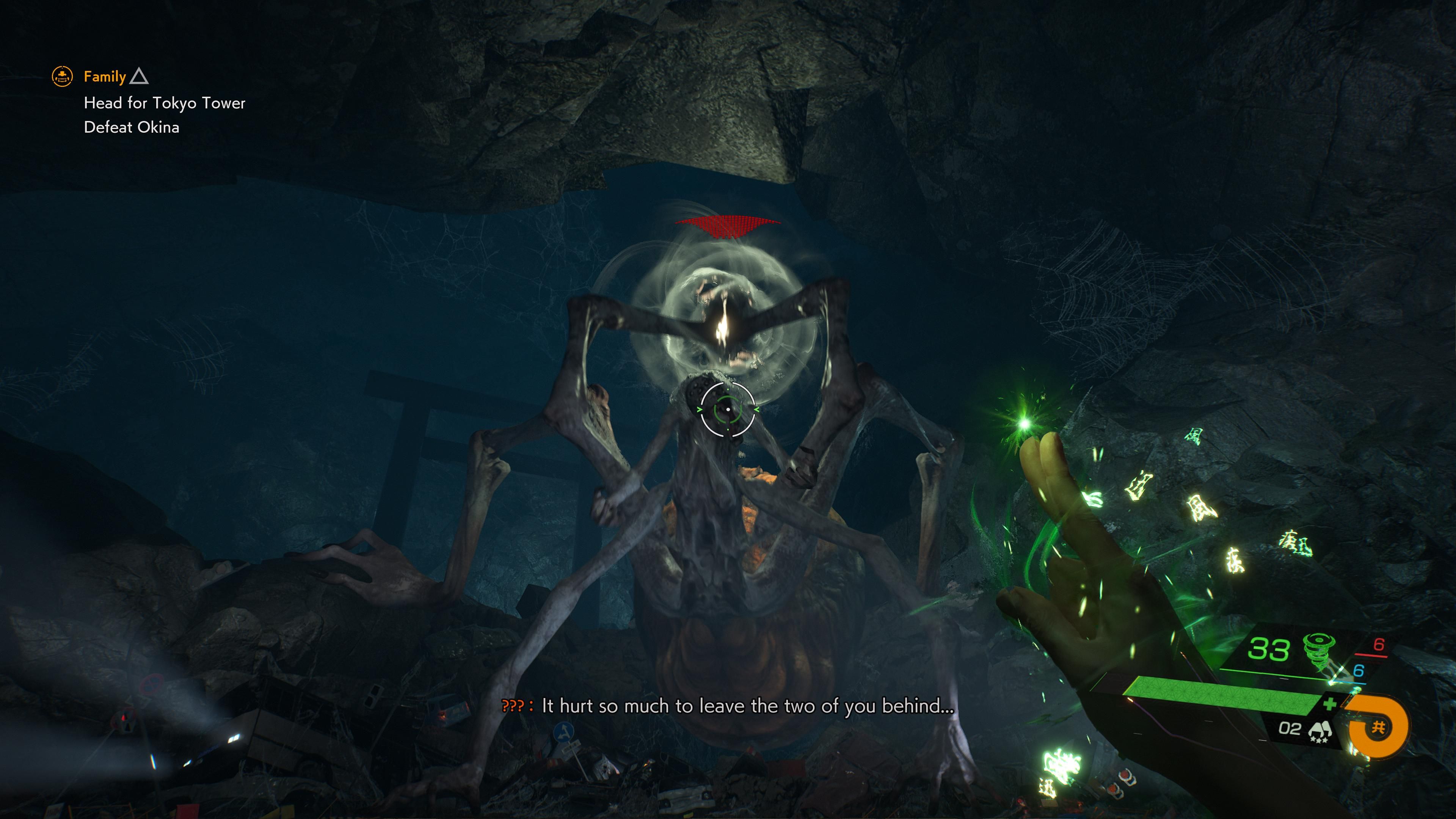 As already mentioned, Okina’s moves will cover an important area of the cave in which you’re fighting. From time to time, the spider will move one of her legs from one side of the arena to the other. The reach of this blow will depend on how close or far you're standing against her.

Another move she’ll use constantly is a powerful shockwave. Okina will charge both hands and hit the ground, producing a shockwave that reaches all the floor area.

As you damage the boss, she’ll also make pieces of the roof fall, which actually can be useful to you because they contain units (SP) for your different magic abilities. 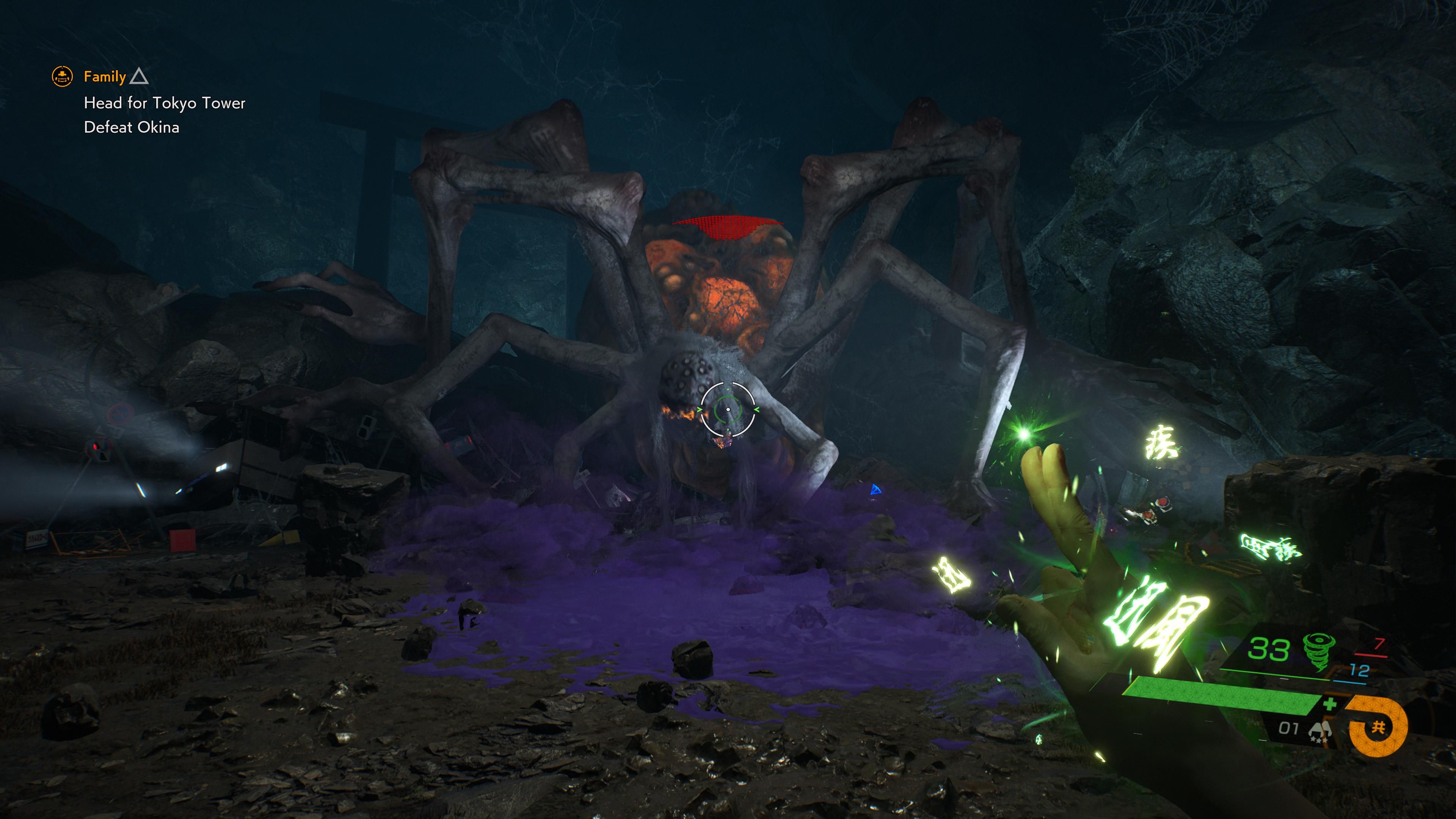 After taking one of Okina’s core, she’ll add one special attack and improve a previous one. The former is a poison cloud that will cover a part of the battlefield — don’t go near it, or you’ll gradually lose HP. The latter, on the other hand, is the use of consecutive charged attacks with her hand, which will emit numerous shockwaves that are faster than before.

You can always predict her shockwave move because it’s the only one that Okina charges before doing it. Furthermore, the poisonous one has a purple hint on her face.

How To Beat Okina (Big Spider) 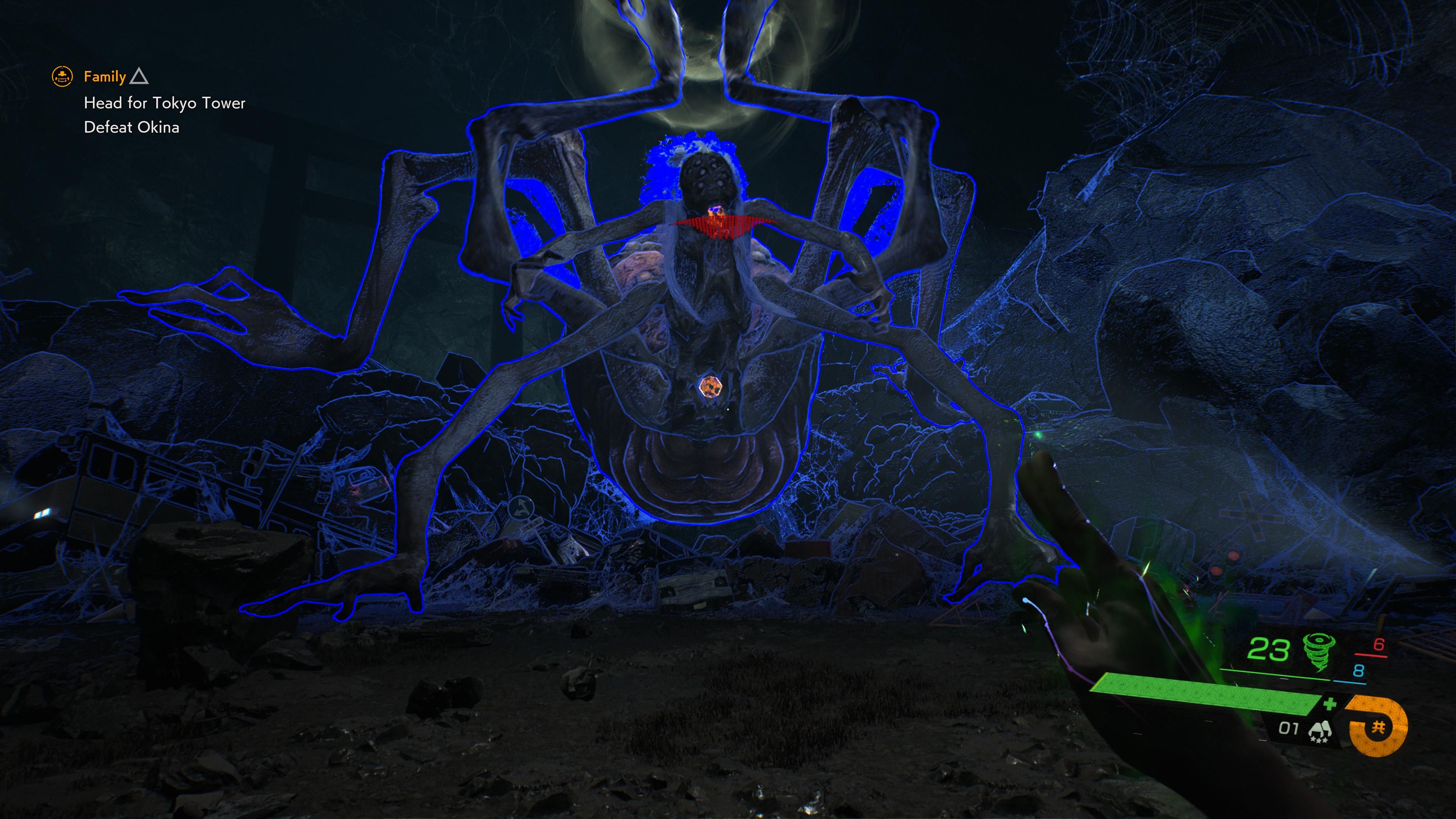 You will be transported to a cave an alternate dimension when facing this ugly and terrifying spider. There’s enough space to move, but notice that you are more restricted than in Yaseotoko’s arena.

Besides not having many defensive options, you can avoid receiving damage during this fight in some ways. To begin with, the sweep attack can be avoided by just going backwards a few steps. However, to do this flawlessly, you need to be near her before she actually makes her move. If you’re far, and you can’t avoid it, simply use your guard — you have the chance to parry it, too!

Use your healing items as soon as you need them. You’ll have some extra ones on the right side of the cave, where a small shrine is waiting for you. Plus, the falling pieces of land won’t leave you out of SP. 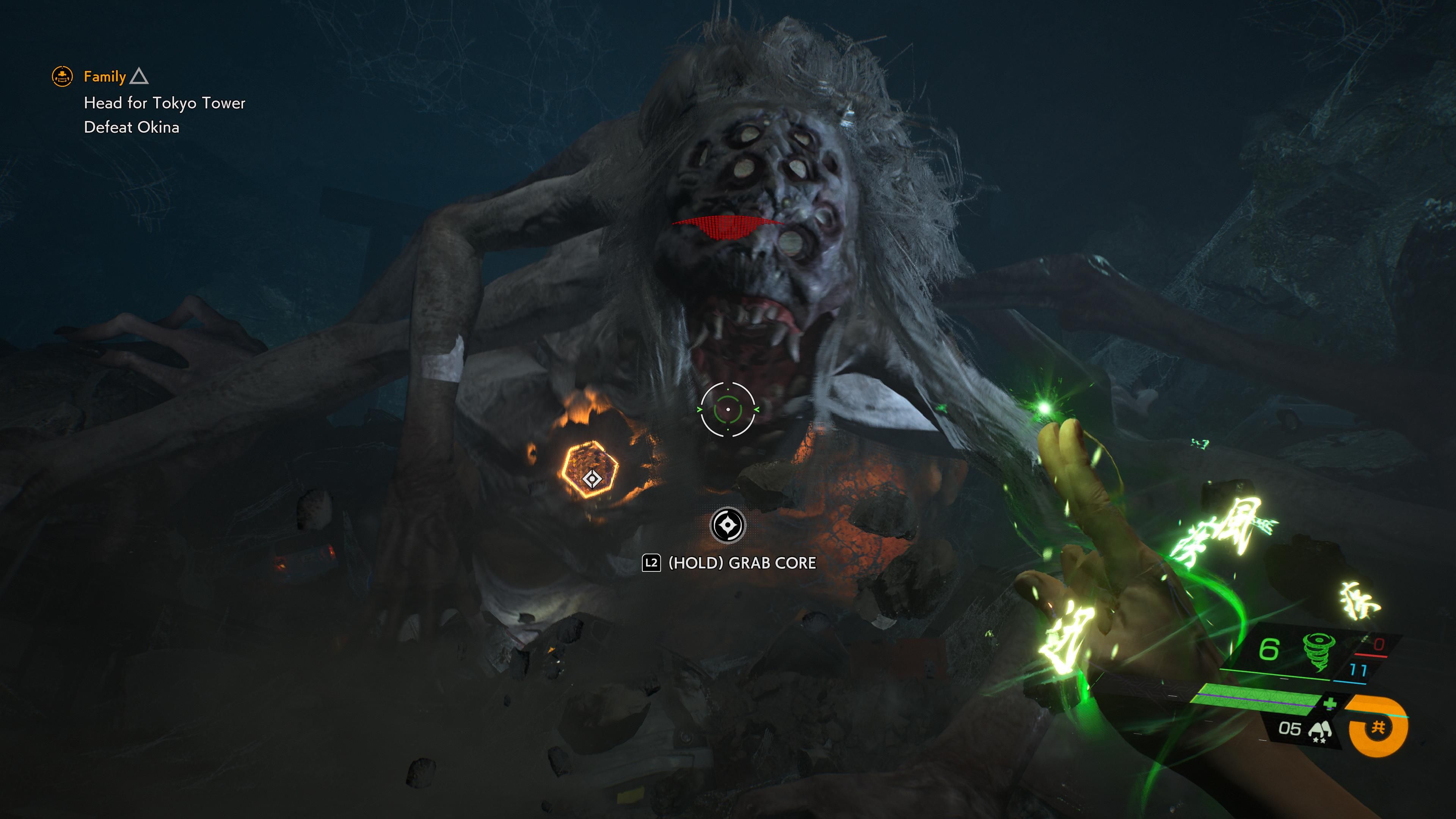 The shockwave, on the other hand, can be jumped. Its timing will get more difficult to read once Okina starts producing multiple shockwaves, but it might be easier to jump it at the beginning of the fight. Then just rely on blocking, and you won’t receive too much damage.

To beat Okina, you need to take two cores from her. Use Spectral Vision once to locate her head’s and chest’s cores. When you take one of these, she’ll attack faster and with variations, but your defensive options shouldn’t change. The only difference is with the poison cloud, which you shouldn’t block: just go a few steps backwards, and you’ll be fine — its reach is pretty limited and only near her body.

Use your Weaving depending on the distance between you and the spider. Use the water one only when you’re close, and the rest for when you’re farther away.

The Aftermath Of The Third Boss Fight 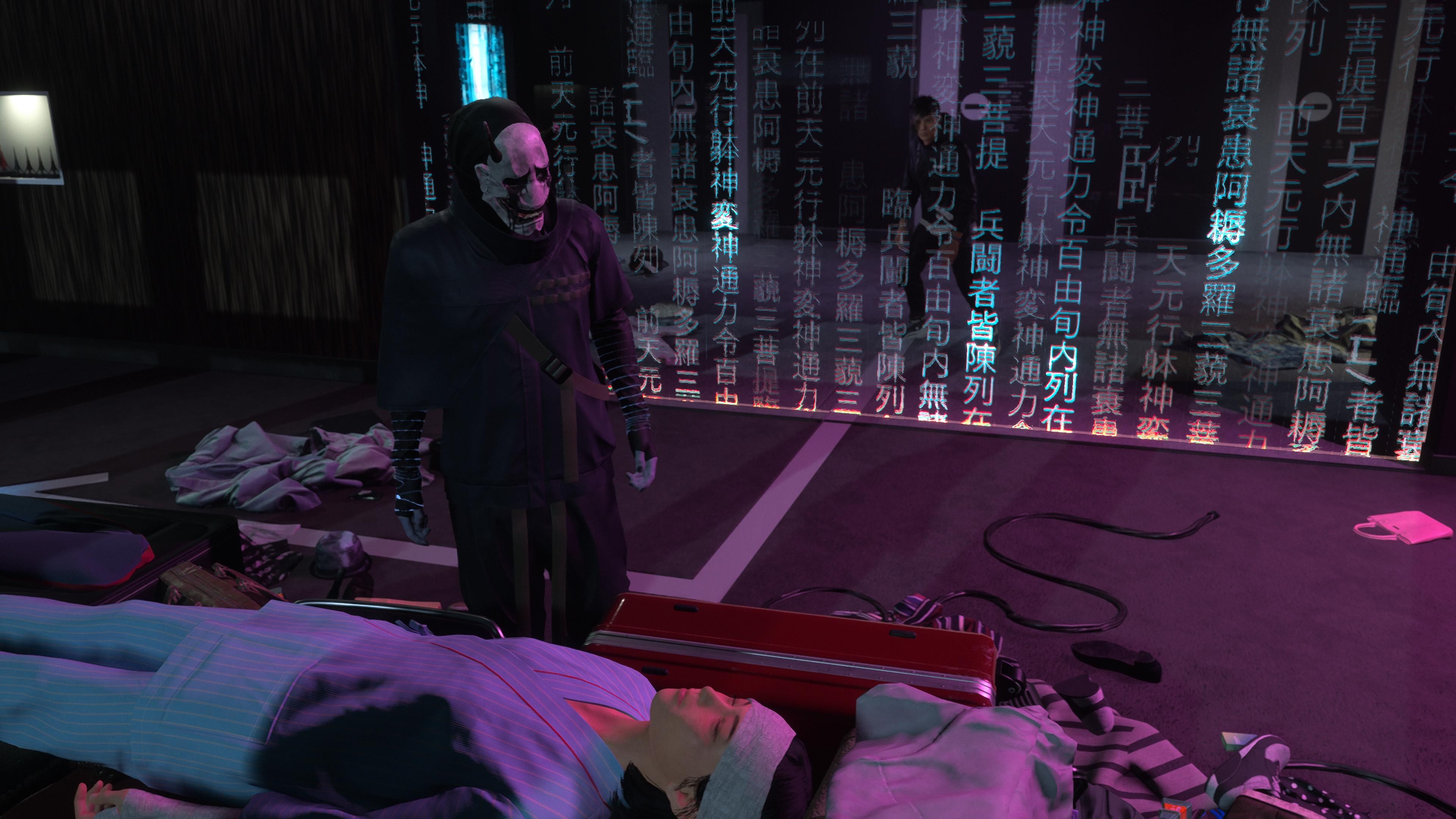 Once you take her two cores, you’ll end the fight. This masked enemy will be purged during a cutscene, and you won’t see her again.

However, don’t put your guard down just now. Right a few moments after this battle, you’ll be facing KK’s body once again for the last round.