Genshin Impact's lovable fireworks fanatic, Yoimiya, has been in the game for a while now, but recently got some extra attention thanks to her involvement in the limited-time Irodori Festival event. If you haven't paid a visit to Inazuma in a while, make sure to stop by soon for unexpected character interactions, a poetic mystery rooted in history, and several exciting mini-games.

Yoimiya indeed has a role in the festival proceedings, but she also has a role on many players' teams in Genshin Impact. She's a ranged Pyro DPS character who loves shooting flaming arrows and sending enemies sky-high, just like her fireworks. Most would agree that Yoimiya's not the hardest character to play as, but there are a few pointers you can keep in mind to really make sure her damage is explosive. Let's get into them.

Don't Switch Out During Yoimiya's Skill 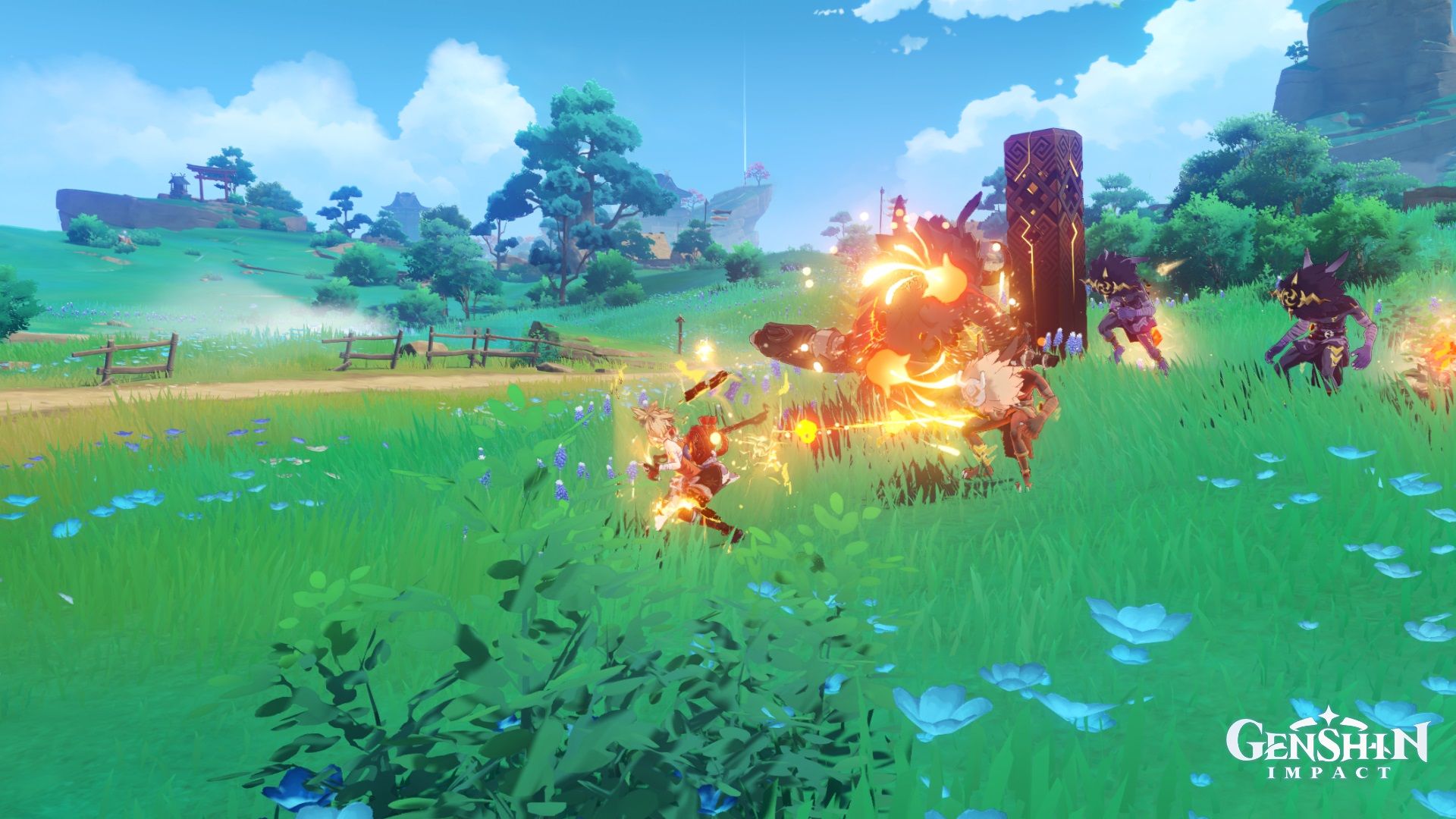 When you activate Yoimiya's Elemental Skill—Niwabi Fire-Dance—her Normal Attacks will gain increased damage and Pyro-infusion for ten seconds. This ability is the bread and butter of Yoimiya's gameplay, and where she derives almost all of her damage. You'll want to activate it every time you switch in Yoimiya to deal damage.

However, when it's Yoimiya's turn in your team's rotation order, make sure you're willing to commit to leaving her on the field for a while. Unlike many other Skills in Genshin Impact, Yoimiya's Skill will disappear with no residual effects if she leaves the battlefield while it is active. Niwabi Fire-Dance also has an 18-second cooldown, meaning that Yoimiya won't be setting off any fireworks for a while if you accidentally switch her out too early. Consequently, you should do all the necessary setup with your other characters first, and then swap to Yoimiya at the end to clean up enemies.

Use Yoimiya's Burst First (And Last) 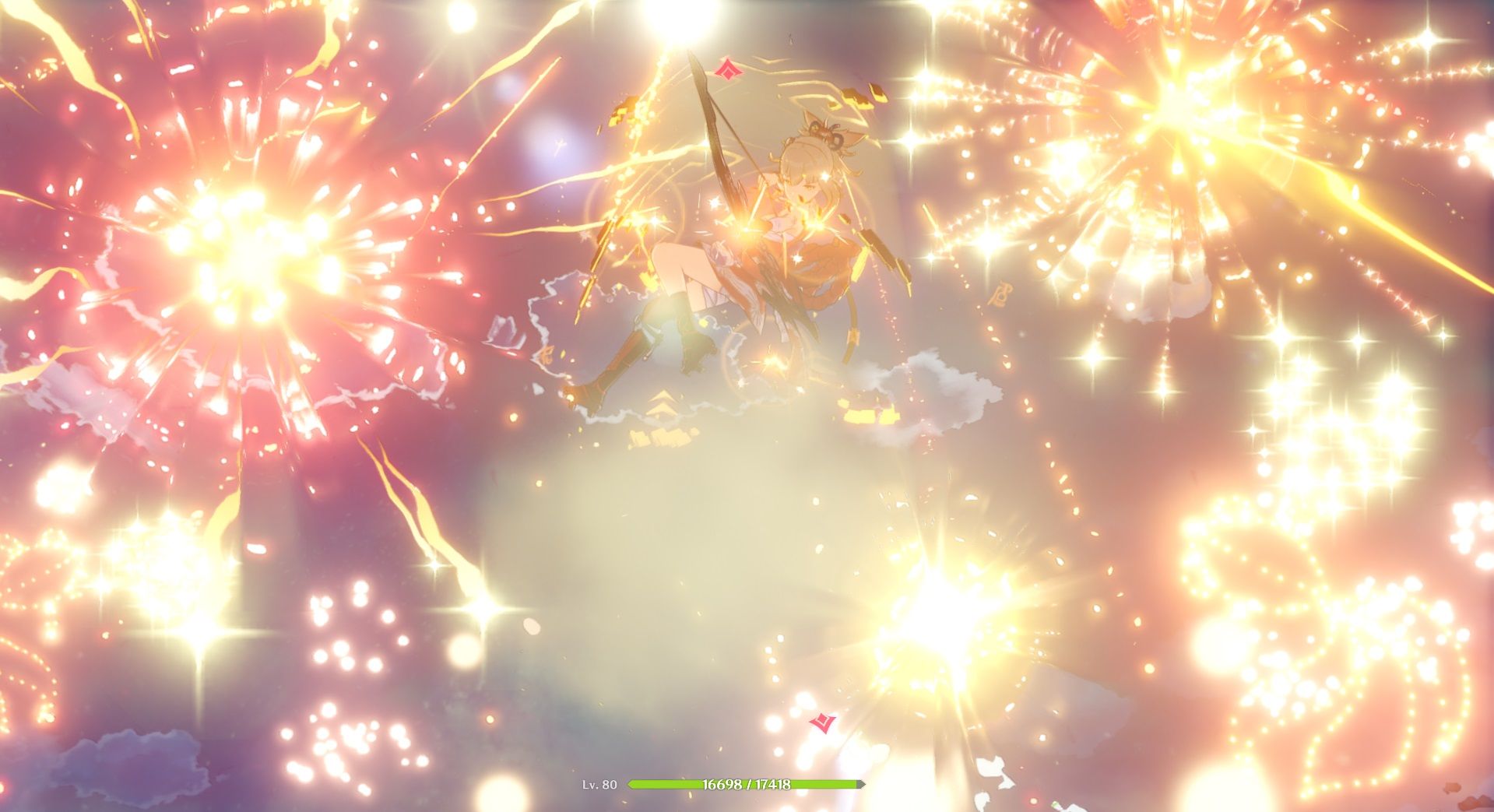 Although many players consider Yoimiya's Elemental Burst to be underwhelming, it actually represents up to 20 percent of her overall damage and should not be ignored. With enough Energy Recharge, it's actually possible for Yoimiya to use her Burst at the beginning of her rotation, use the full duration of her Skill, and then use her Burst again before she switches out.

Being able to activate Yoimiya's Burst twice in one rotation requires a decent amount of Energy Recharge (the exact number varies wildly depending on your team composition), and it also requires you to wait around on-field for a few extra seconds until your Burst comes off cooldown. If you can properly manage it, though, you'll gain extra damage while Yoimiya is active (when things like Xingqiu's Rain Swords trigger Yoimiya's Aurous Blaze Explosions), and you'll also pass ATK buffs and a targeted source of Pyro damage to the rest of your team when you swap out.

Give Yoimiya A Shield 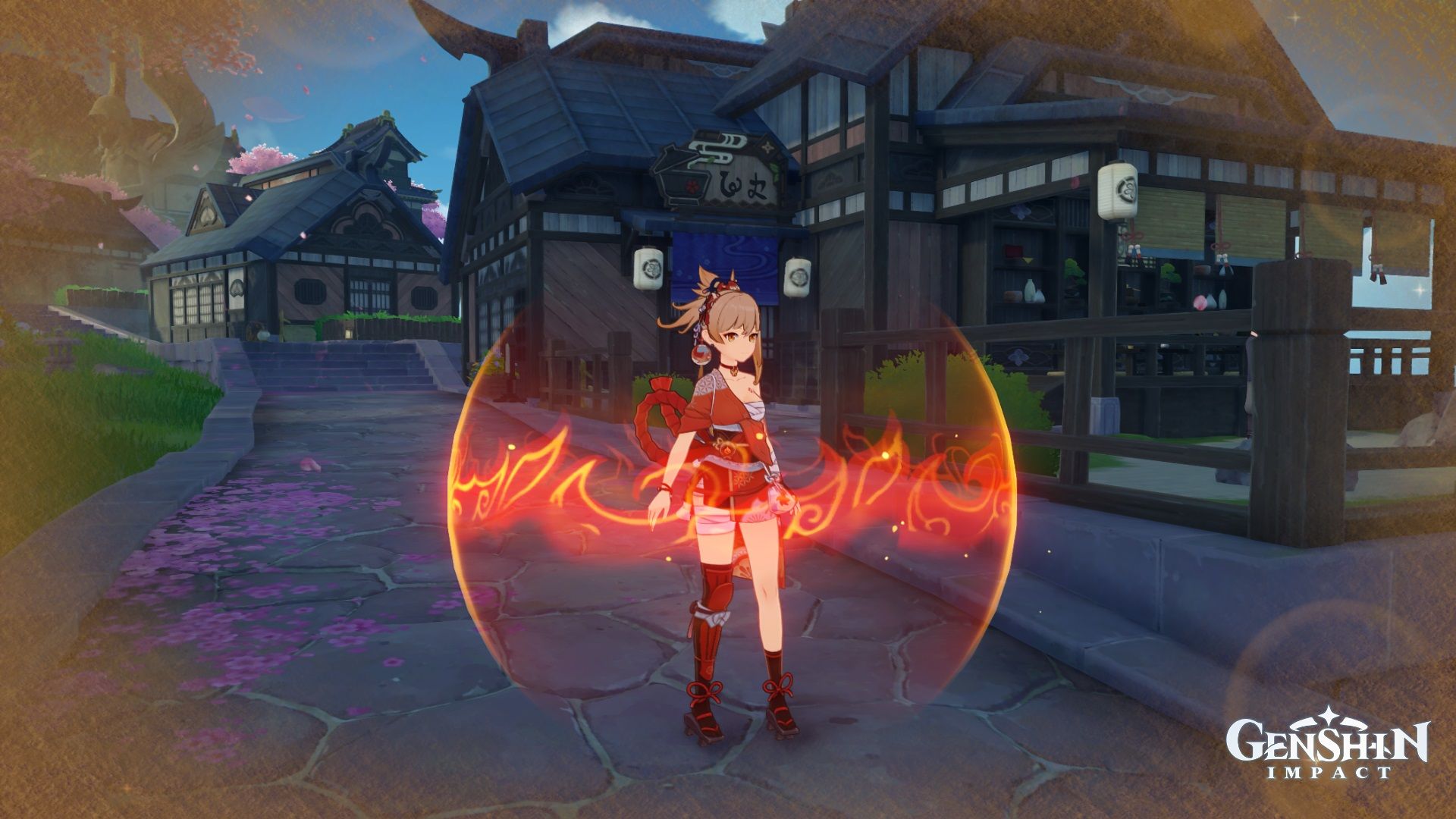 Unless you plan on smacking enemies with Yoimiya's bow itself, you'll usually want to maintain as much distance from opponents as possible. Unfortunately, Hilichurls can be quite speedy, and soon you may find yourself surrounded despite your best evasive efforts.

This is why you should give Yoimiya a shield, since she arguably benefits from a shield more than any other character in Genshin Impact. Yoimiya has low Base HP and low Base DEF, making her especially weak to hostile attacks. She also needs to fire her entire Normal Attack string in order to maximize her damage—if Yoimiya is staggered while attacking or if you need to dodge frequently, her DPS will plummet.

Zhongli can give Yoimiya the strongest shield in the game, but Diona, Thoma, and Noelle are also characters that can provide Yoimiya with the extra safety she needs.

You Can Speed Up Yoimiya's Attacks 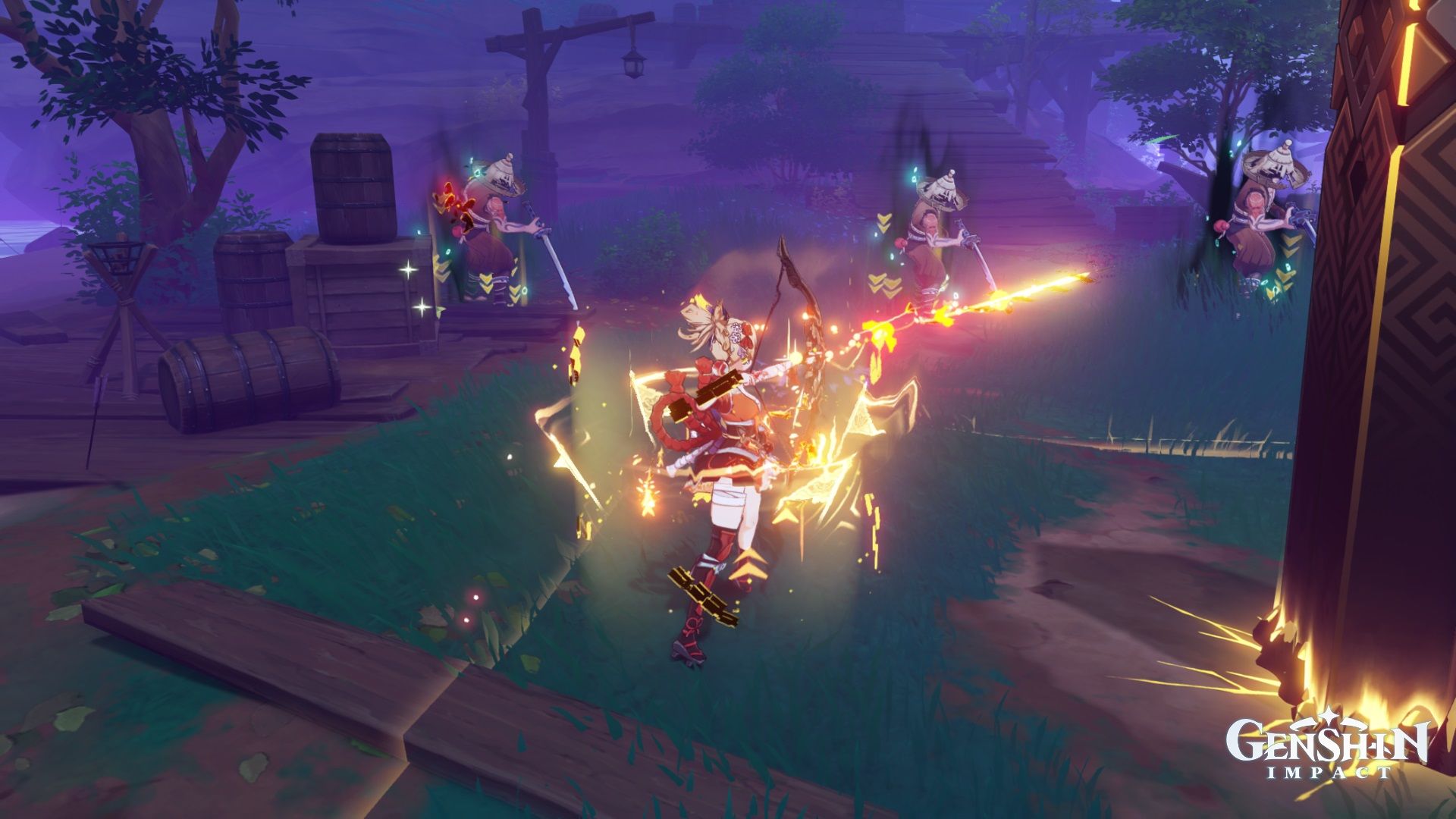 Considering how rare ATK SPD buffs are in Genshin Impact, it's surprising how few characters can utilize them well. This is because even with increased ATK SPD, some characters still have lengthy enough animations that they can't easily fit more Normal Attacks into their rotation. Eula is one such example of a character who gains much more from ATK buffs than ATK SPD bonuses.

Yoimiya, on the other hand, flourishes with ATK SPD, since it allows her to squeeze significantly more Normal Attacks into her Skill's duration. A 12 percent ATK SPD buff from something like Yun Jin's C6 will allow Yoimiya to perform three to four extra Normal Attacks during the Skill window. This noticeably increases her damage output, and also gives you more freedom to dodge and reposition without decreasing your number of shots. Genshin Impact only has a few sources of ATK SPD buffs at the moment, but consider handing them to Yoimiya if possible. 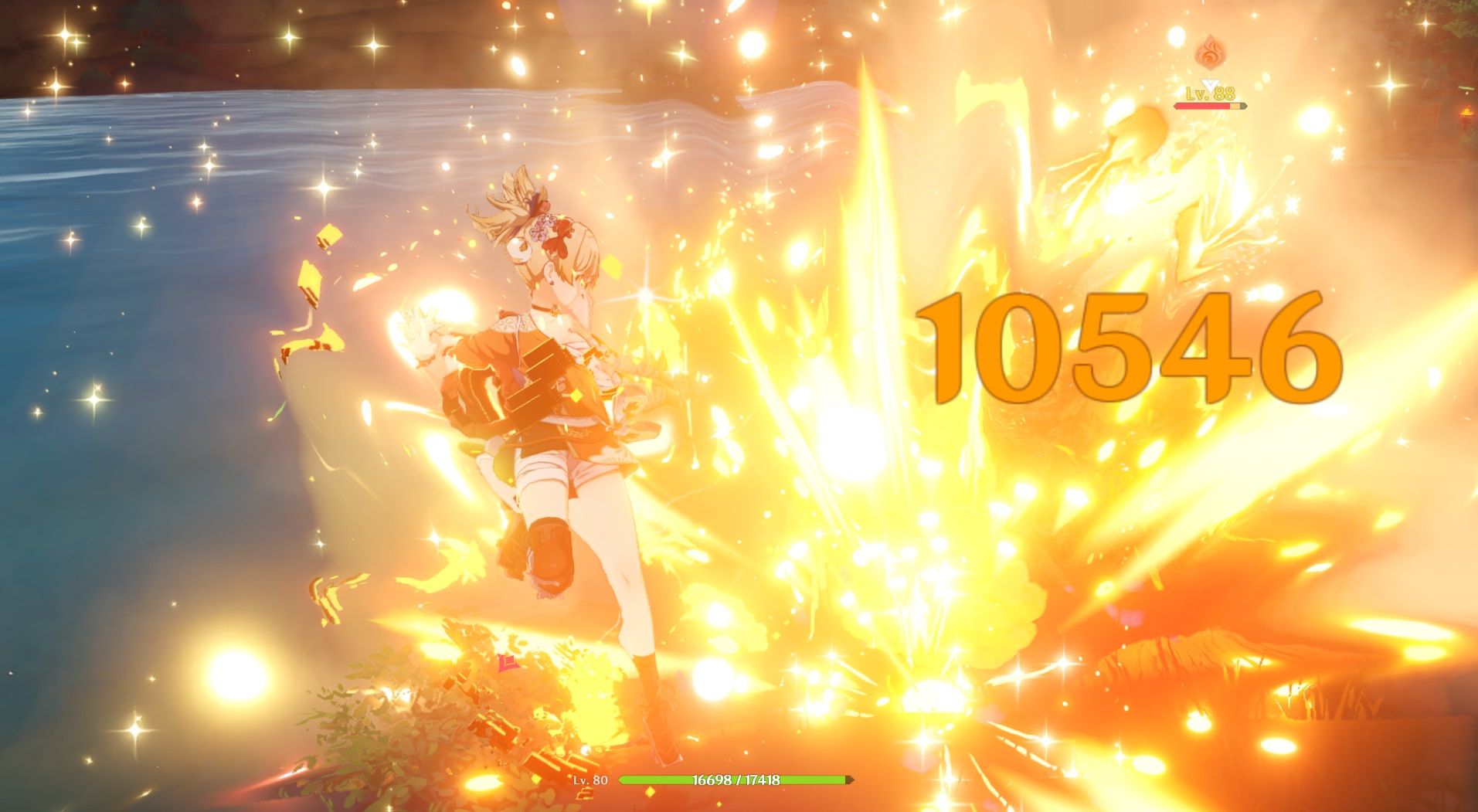 When you activate Yoimiya's Elemental Burst, she will jump into the air amid a backdrop of sparkling fireworks before firing an explosive shot into the ground. This shot will mark one enemy with Aurous Blaze, which can periodically be triggered by Yoimiya's teammates for extra Pyro explosions.

Even though the initial attack deals damage in a small AoE in front of Yoimiya, it can miss surprisingly easily. Not only does this negate any damage from the first strike, but Aurous Blaze will not be applied to any enemies, effectively canceling any residual effect from Yoimiya's Burst.

To prevent this from happening, be wary of using Yoimiya's Burst when an enemy like a Lawachurl is charging rapidly towards you. They might end up running right underneath Yoimiya while she's in the air, causing her Burst to miss entirely.

Her Burst can actually be utilized in this way if you're specifically trying to dodge the enemy's attack, but you'll need to aim elsewhere if you want to get any damage out of her Burst.