Ever since its release, Genshin Impact has seen many characters with unique abilities and play styles. Having over 50 characters to choose from, every player can get their comfort character to explore the huge world of Teyvat. Wanderer was the second Fatui Harbinger added as a playable character to the game.

He's a five-star Catalyst-wielding character with an Anemo vision. If you've managed to add this character to your party, the next step is to select the best weapon for him, and the choice depends on your play style. His abilities allow him to be the main DPS as well as a supporting character. 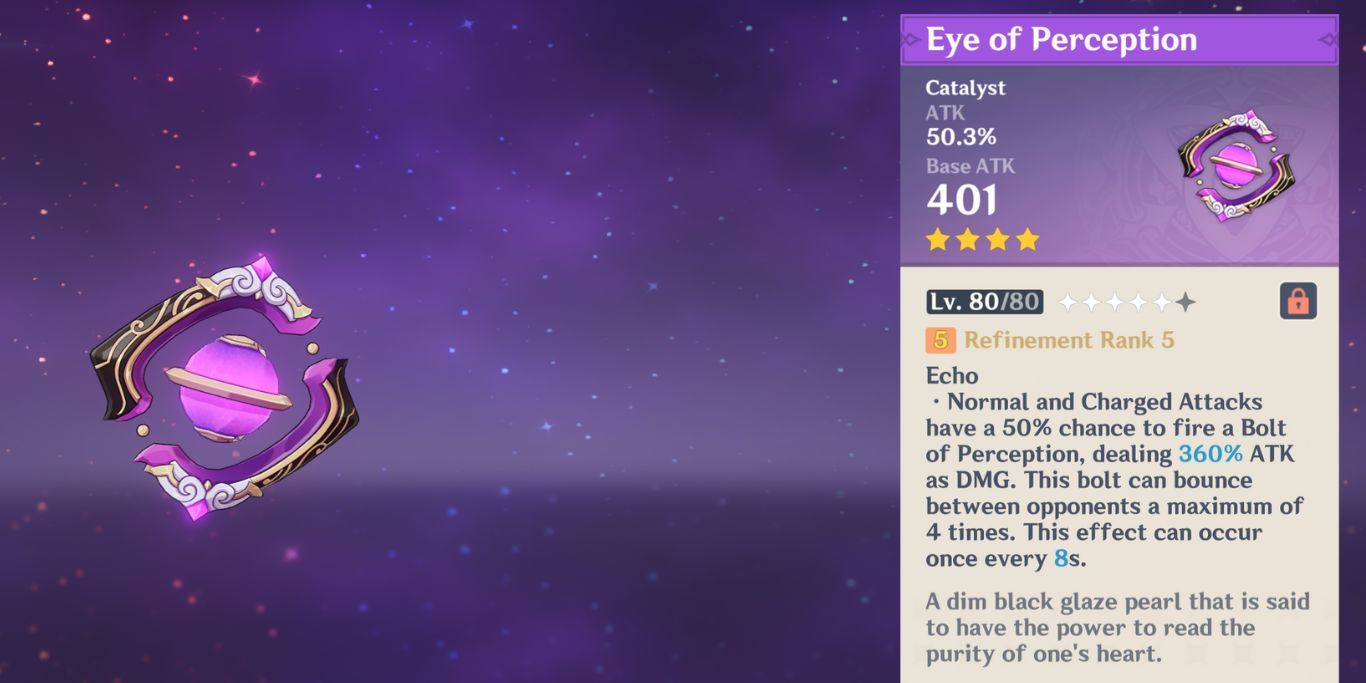 Eye of Perception is a four-star weapon that players can get from any banner randomly. Sometimes, it's featured on the weapon banner with a higher drop rate. This weapon gives you an ATK Percent bonus of 55.1 percent at the maximum level as a secondary stat, which is one of the most useful stats for Wanderer.

Secondly, the Normal and Charged Attacks done by the character using this weapon have a chance of firing a bolt that can deal massive damage to four enemies at random. Since Scaramouche scales on ATK completely, this weapon suits him. Although, you might struggle with his Crit Ratio if you don't have good artifacts. 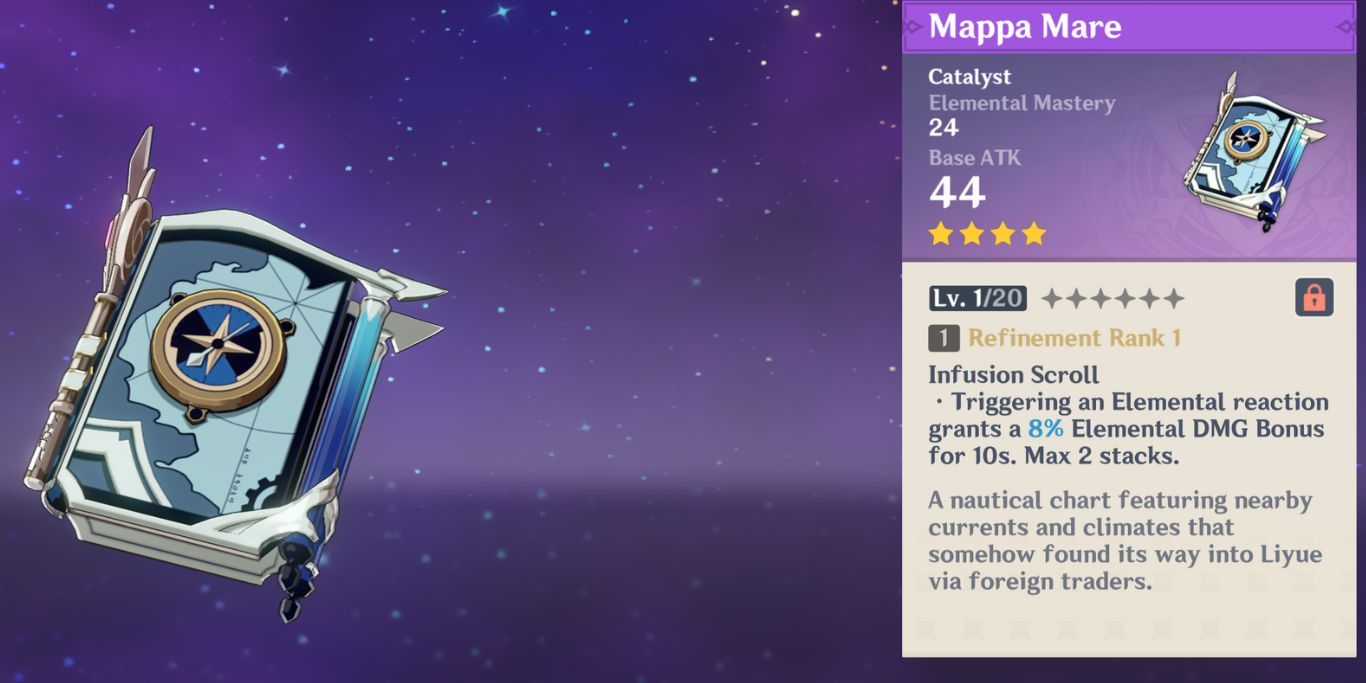 Mappa Mare is one of the best weapon choices for free-to-play or low-spending players when it comes to Wanderer. It's a craftable weapon that can be acquired as far as you have one of the Northlander Catalyst Billets. These billets can be acquired by exploring Mondstadt, Liyue, and Inazuma or from different weekly boss fights.

It gives you 110 Elemental Mastery and increases your Elemental DMG Bonus by 32 percent after triggering two Elemental Reactions at refinement five. This can be a great fit if you want to use Wanderer as a mediator between reactions from off-field characters like Xiangling or Fischl. 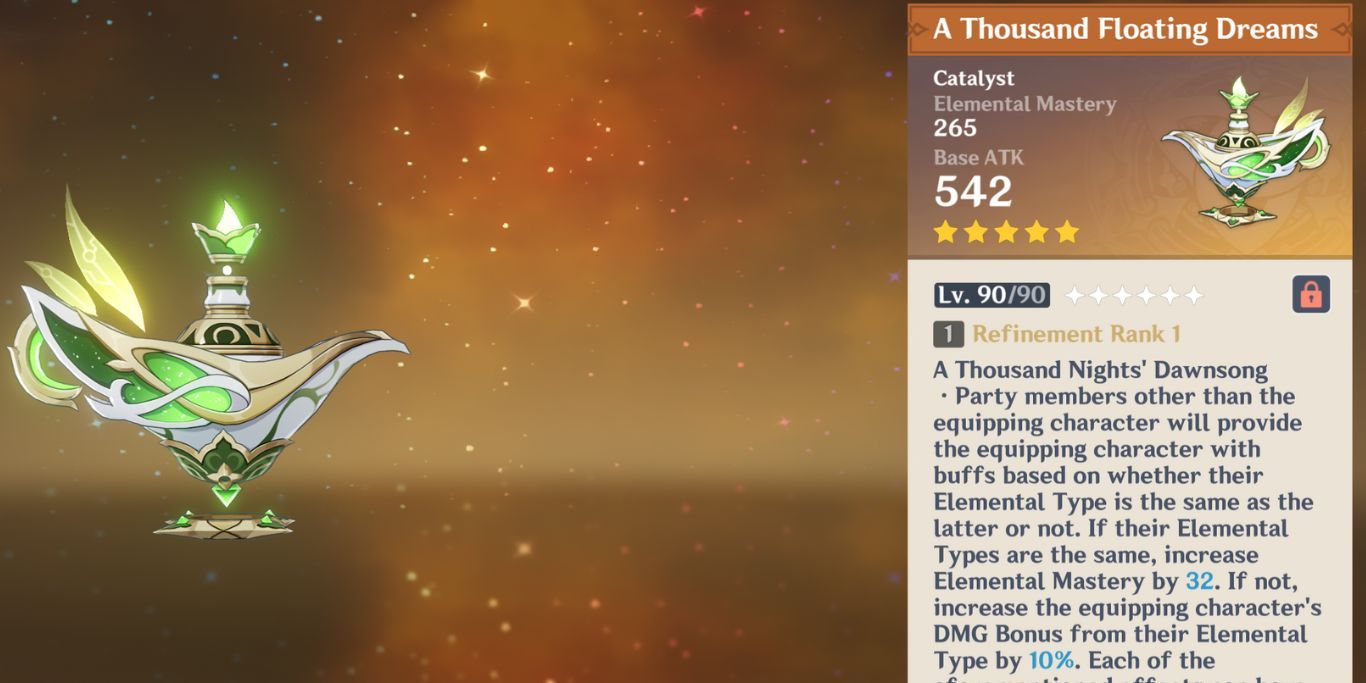 The five-star counterpart for Mappa Mare, A Thousand Floating Dreams is Nahida's signature weapon, and you can only get it when it's featured on the weapon banner. This weapon can give you an astonishing 265 Elemental Mastery as the secondary stat on level 90. Moreover, its passive fit Wanderer's supporting play style perfectly.

Usually, you'll have two to three characters who don't have Anemo vision alongside him, and this weapon gives you a ten percent DMG bonus for each of them. Not only does it fulfill the EM requirement that allows you to focus on Crit when it comes to artifacts, but it also buffs Scaramouche's damage. 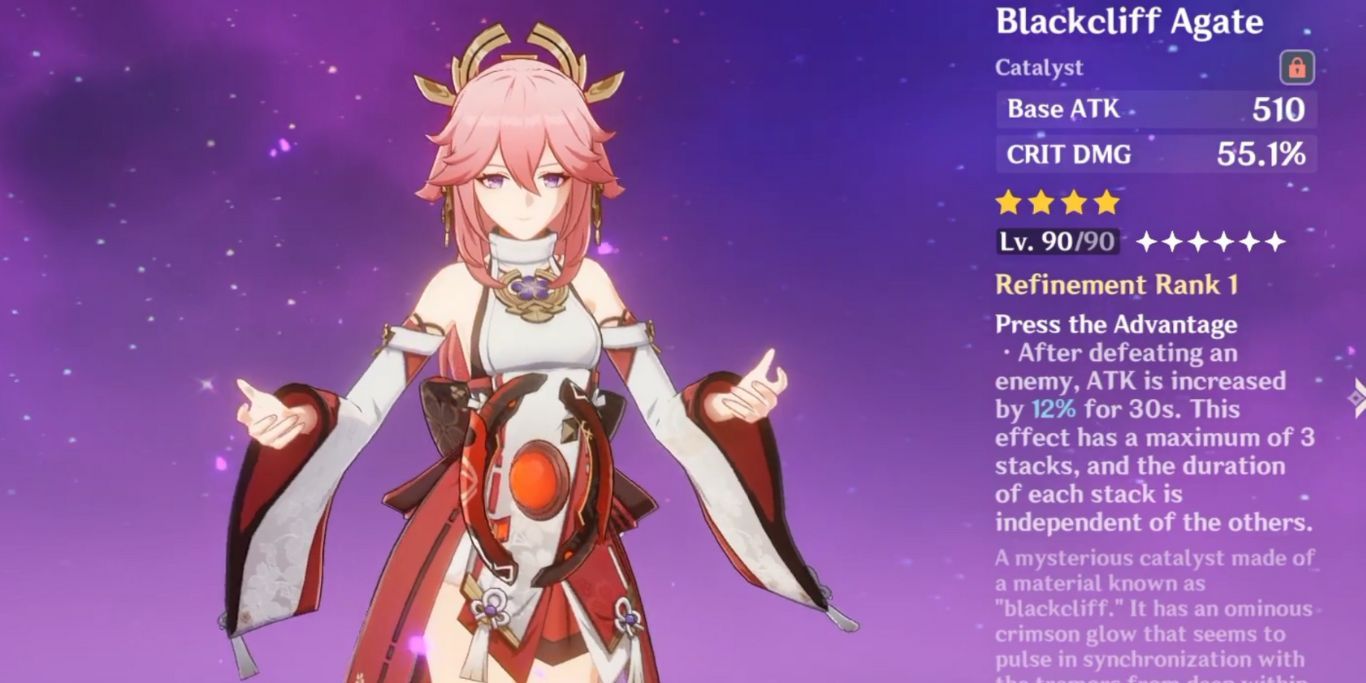 Furthermore, your ATK Percent is increased up to three times whenever you defeat an enemy. Wanderer is best against a hoard of small enemies, and this weapon buffs that aspect of him even more. 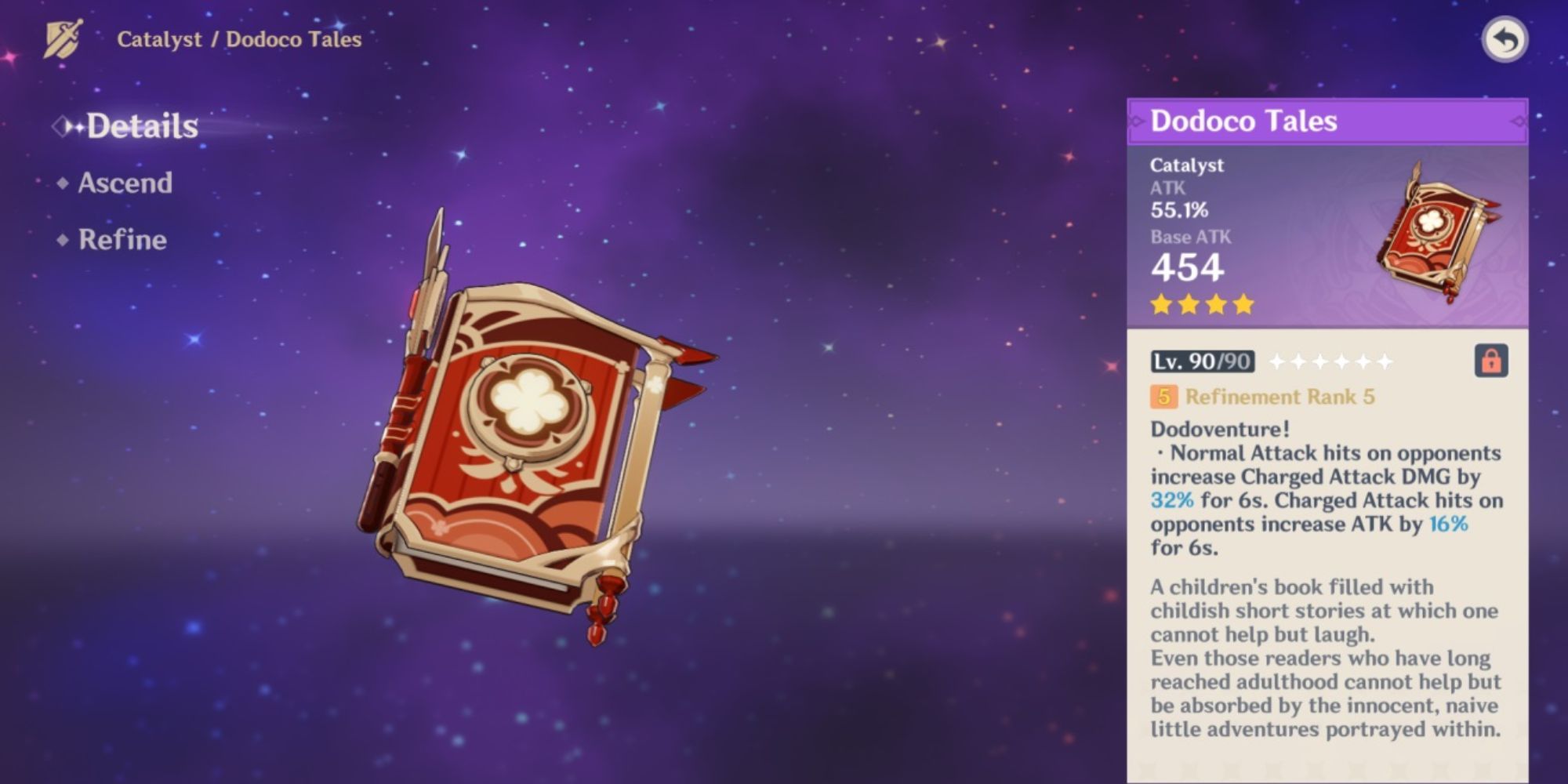 Wanderer has a bunch of choices for a suitable four-star weapon, but this is the rarest one because it could only be acquired during a limited-time event. Similar to Eye of Perception, this weapon also gives you an ATK Percent bonus of 55.1 at the maximum level, but its passive is where the good stuff is at.

With this weapon, Wanderer's Normal and Charged Attacks buff each other. He can only use these two attacks when he's floating with the Elemental Skill, making it easy to get this boost. Furthermore, if you have this weapon, you'll most likely have it on refinement five since it was given for free. 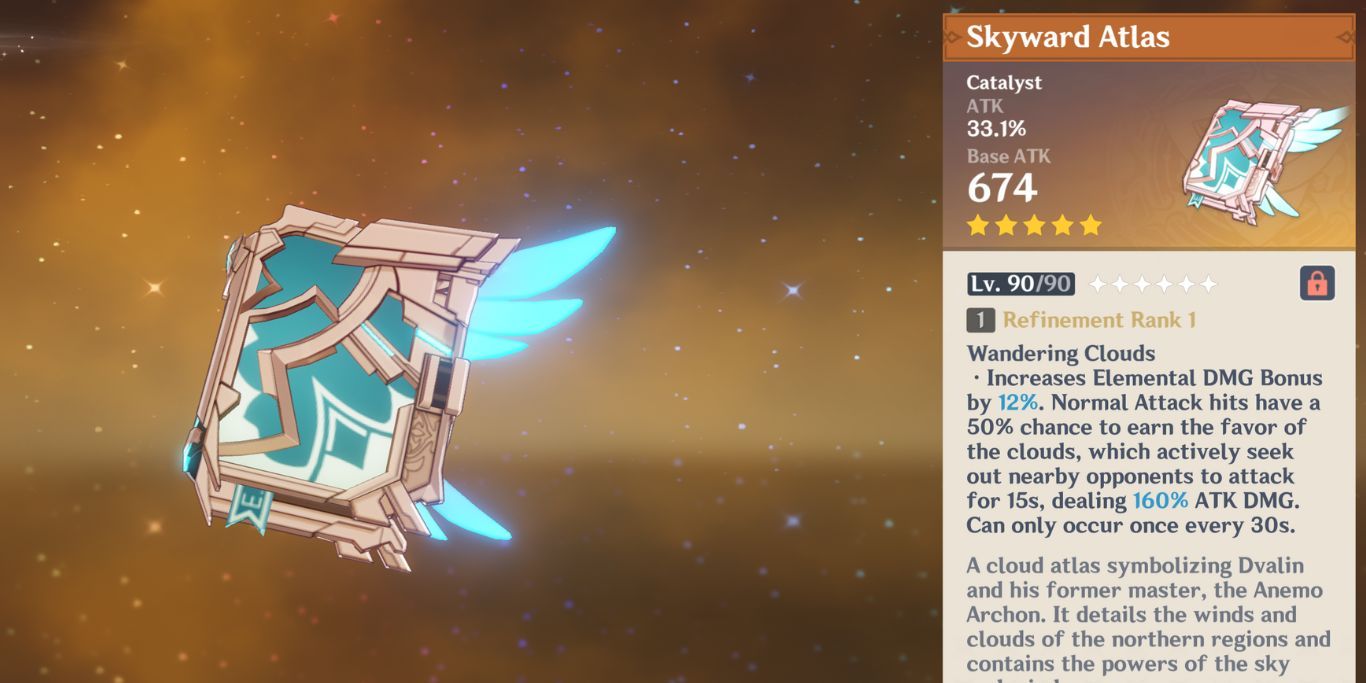 Getting into the whale territory, Skyward Atlas is one of the standard weapons in Genshin Impact. It can be acquired randomly when you're pulling on the weapon or the standard banner. This weapon only has an ATK Percent boost of 33.1 percent at the maximum level, but it has a high base ATK (674).

It also gives a constant Elemental DMG Bonus of 12 percent at refinement one. Finally, it has a chance of dealing one instance of massive damage to the enemy just like the Eye of Perception. All of this makes this weapon one of the best on Scaramouche. 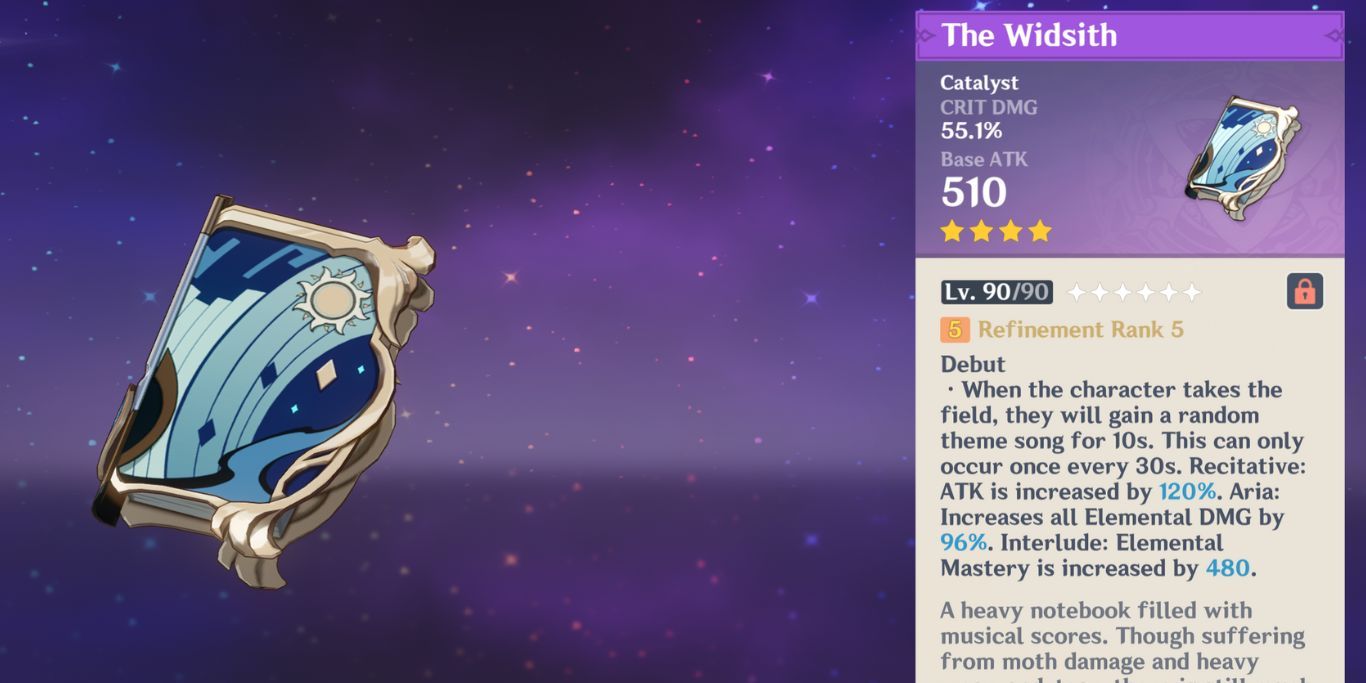 The Widsith is one of the best all-rounder weapons in Genshin Impact because of the diversity of its passive and secondary stat. You can get up to 55.1 percent Crit DMG from this weapon, which makes the pressure of getting good artifacts much lesser.

Moreover, you can get an ATK Percent boost, Elemental DMG boost, or Elemental Mastery at random whenever the character takes the field. All three of these buffs are great because Wanderer always deals Elemental DMG and he is great for triggering Swirl reactions. 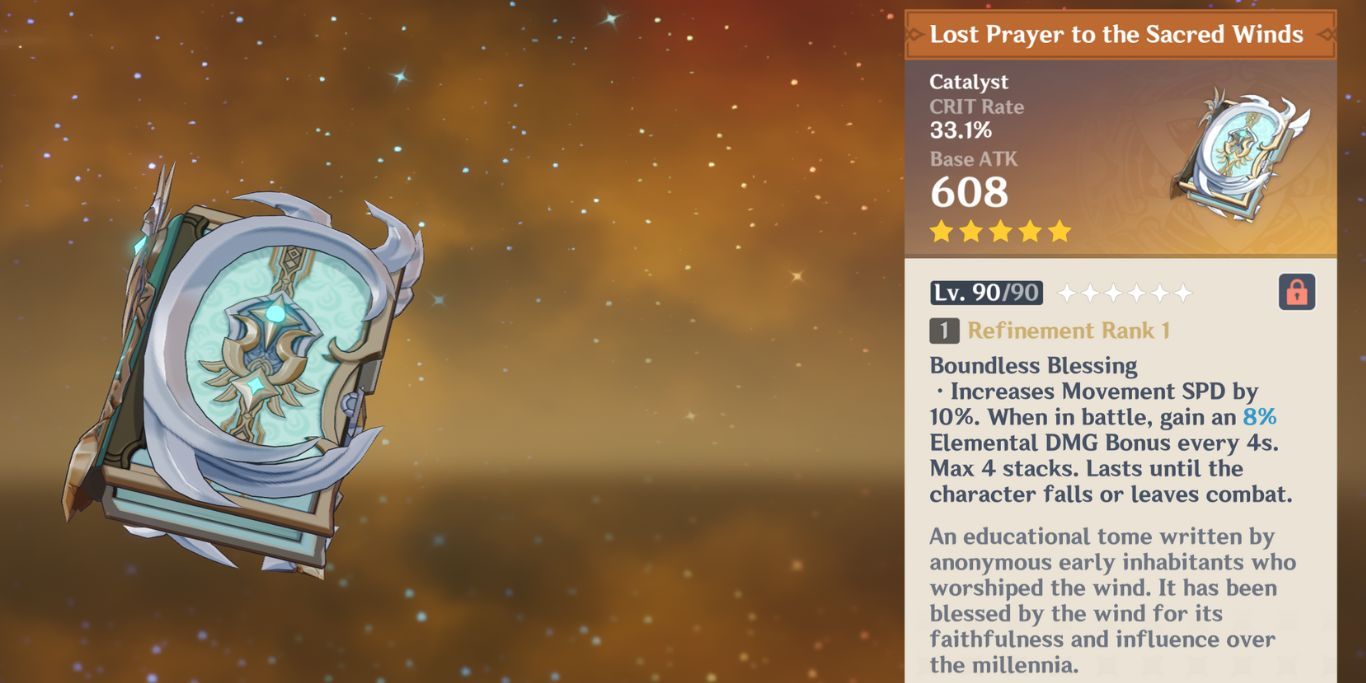 This weapon can also be acquired randomly when you're wishing on the standard or the weapon banner, but it also has a high drop rate at certain times on the weapon banner. It's considered one of the best weapons in the game because of the surprising 33.1 percent Crit Rate on the secondary stat.

Wanderer's ascension stat is also Crit Rate, and these two things are almost enough to fulfill the Crit Rate requirement. Moreover, you constantly get an eight percent Elemental DMG Bonus when you're on the field with this weapon, and this stacks up to four times. 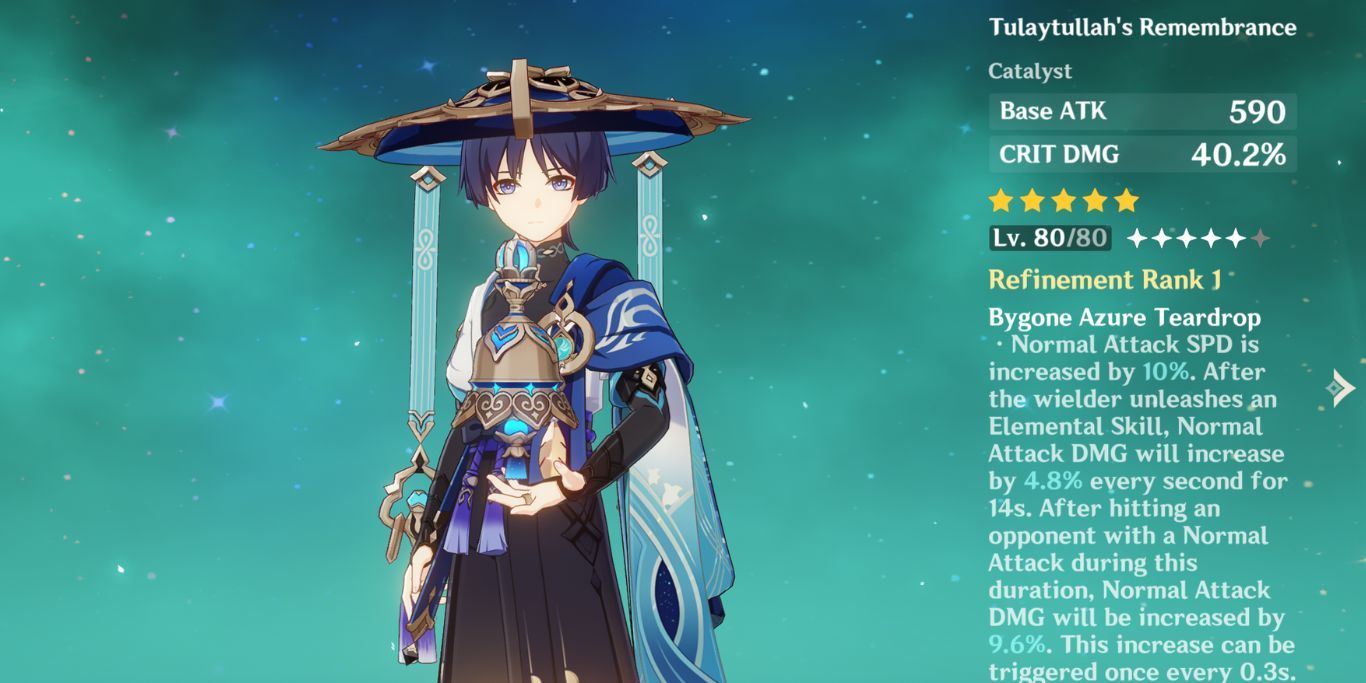 Finally, it's no surprise that Wanderer's signature weapon is the best-in-slot for him. As soon as you equip this weapon on a character, they get a constant Crit DMG and Normal Attack SPD boost from the secondary stat and passive. Using an Elemental Skill also gives you a Normal Attack DMG boost every second.

As a cherry on top of the cake, you get an even higher Normal Attack DMG boost when you hit enemies with said attacks. While you can use both Normal and Charged Attacks in Scaramouche's Elemental Skill, it's recommended to only use the former if you're using this weapon.