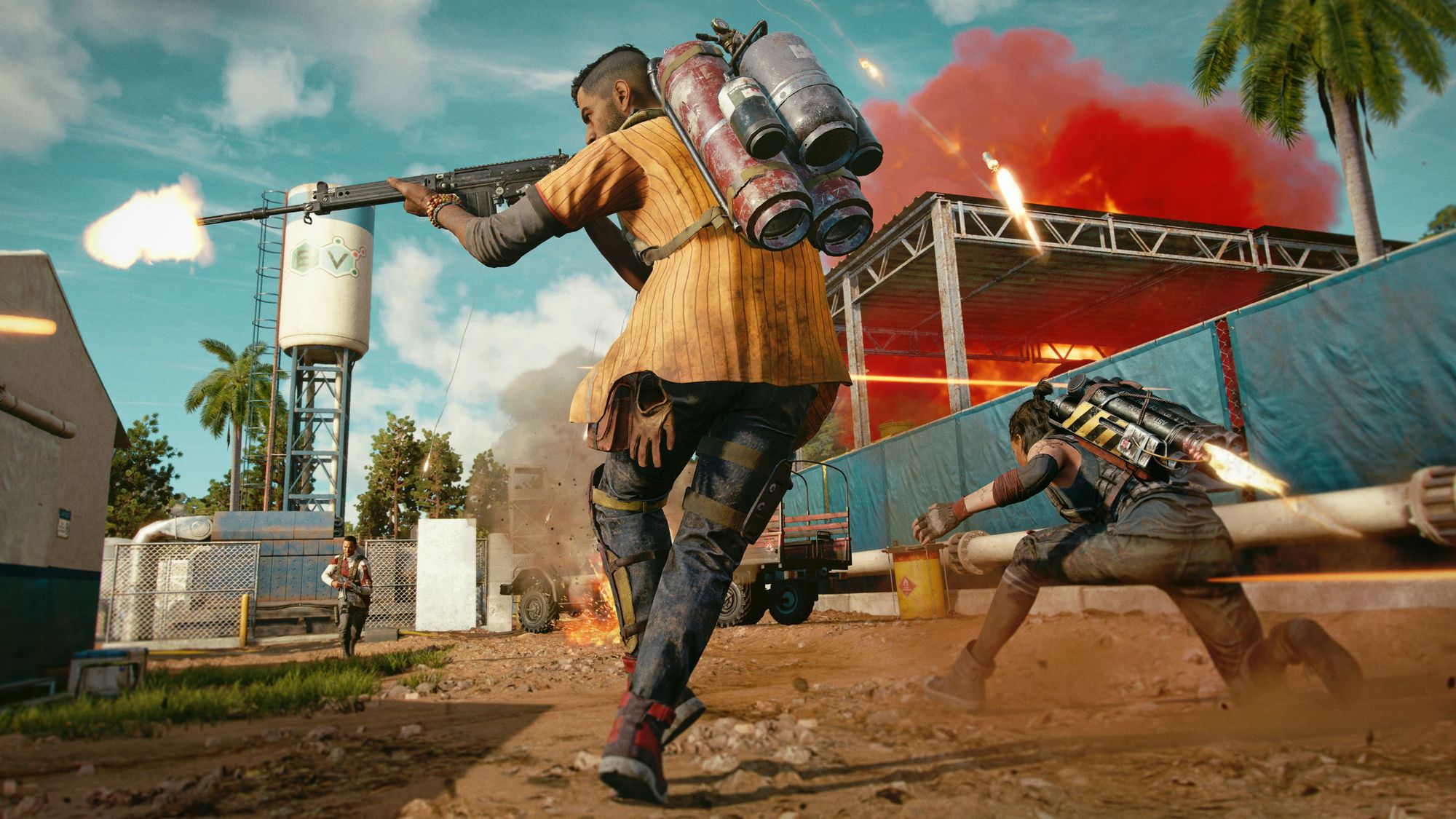 The sixth Far Cry has you fighting Giancarlo Esposito’s villainous El Presidente, but has anything really changed other than the setting?

By the time a popular, mainstream games franchise reaches its sixth iteration, it will have become the subject of a balancing act. On the one hand, the developer will want to make sure it gives loyal fans what they want but on the other, the slightest perception of staleness or going through the motions can spell the death of the whole series.

On the evidence of well over four hours of hands-on play, Far Cry 6 appears to have negotiated that tightrope with some skill. It helps that developer/publisher Ubisoft can throw vast amounts of resources at it, of course, but the elements that define a Far Cry game – the giant open world, solid gunplay, and memorable characters – are very much in evidence, along with some new gameplay mechanics and ideas that bring a new air of freshness.

Far Cry 6’s setting is the fictional island of Yara, ruled with an iron, dictatorial grip by Anton Castillo, who likes to be known as El Presidente. Castillo is portrayed in gleefully menacing fashion by the great Giancarlo Esposito, know variously for his roles as Gus Fring in Breaking Band and Moff Gideon in The Mandalorian. Isolated from the rest of the international community, there’s more than a whiff of Cuba about Yara, although in our playthrough it was unclear whether, ideologically speaking, Castillo leans towards communism or fascism. He’s definitely a cult-of-personality populist, though.

Life in Yara is hard for its inhabitants, who mostly wish to escape; doubly so when Castillo announces that all ‘outcasts’ – anyone who doesn’t toe his authoritarian line – will be conscripted as forced labour at what are effectively prison farms. Yara has just one economic aspect going for it: its scientists have developed a genetically engineered form of tobacco, grown with the aid of a cocktail of noxious chemicals, from which can be extracted Viviro, a miracle, cancer-curing drug.

That plan partially fails and Dani and her best friend Lita are washed up on an island in the Yaran archipelago called Isla Santuario. Lita dies, but thanks to her, Dani knows that Isla Santuario is where Libertad, a group of guerrillas opposing Castillo, are based. When, after acquiring a pistol and a grappling hook, she reaches their camp, the game begins in earnest.

After being recruited to the Libertad cause by leader Clara, the first mission we completed involved locating Juan Cortez, a spymaster renowned for kitting out guerrilla armies with improvised equipment. Cortez is the first of many interesting characters in the game – an old soak who likes to talk, with a crocodile called Guapo as an amigo – the game’s name for animal (and human) sidekicks that you can direct. Far Cry 6 is also entirely playable in two-person co-op mode, we should note.

After a skirmish with government troops in the fishing village where Cortez was originally based, confirming that Far Cry 6’s gunplay is as competent as ever, we hoovered up the resources from their outpost. Back at the camp, Cortez introduced us to the concept of workbenches, where you can craft objects, upgrade weapons and so on, and an idea he calls Resolver, which essentially means creating weapons and accessories from scrap (plus resources like gunpowder and Supremo Bond, a key guerrilla DIY ingredient).

We explored a bit – Yara is criss-crossed with guerrilla paths which government troops tend to avoid, and horses that you can commandeer are plentiful. There are also plenty of side mission style activities, such as destroying government checkpoints on the roads. Typically for a Far Cry game, you have to expand Libertad’s territorial reach to succeed.

The next story mission we took on confirmed that plenty of the classic Far Cry gameplay you’d expect is present and correct. After hooking up with another Libertad operative, and with Guapo the crocodile amigo in tow, we launched a raid on a government fort containing depleted uranium, a precious resource.

First, we scoped out the opposition: Far Cry 6 lets you whip out your mobile phone and use that to tag enemies, alarm systems, CCTV cameras, and other items of interest. Then we were able to parachute down from our vantage point (Far Cry 6 gives you a wingsuit, too) and enter through a smugglers’ cave, before working our way up through the fort as stealthily as possible.

Eliminating the fort’s commander, who we had previously tagged, helped disrupt the command chain and keep reinforcements at bay. We also discovered that Far Cry 6 has a healing mechanism; you can carry two healing packs and you often pick up replacements from dead enemies. The healing animations are surprisingly amusing, one involves snapping a dislocated finger back into place and another cauterising a wound with a cigar.

On returning to the Libertad camp, the depleted uranium we had acquired allowed Cortez to help us build our first Supremo. Supremos are a new class of lashed-together weapons and equipment that Ubisoft has devised for Far Cry 6.

The main part of a Supremo resembles a backpack, but Supremos also come with associated weapons wielded by hand – in our case a flamethrower. The backpack part brings a special attack with a long cooldown (triggered by hitting both bumpers) which launches a fusillade of home-made mortar bombs. Plus, it finally allows you to craft and equip grenades, throwing knives, and even, pointlessly but amusingly, a baseball.

Later in the playthrough, we discovered that Far Cry 6 includes a vast range of Supremos, bringing wildly differing benefits. One, for example, is medically focused, with its special attack generating an area of effect healing field. We only got to use the one Supremo but picking the right one to equip according to the thrust of your mission will clearly be a key factor in the game.

Kitted out with our flamethrowing Supremo, we embarked on a mission that brought back memories of Far Cry 3: to burn down one of Castillo’s Viviro prison farms, liberating its forced labour in the process.

This time, we had a computer-controlled human companion rather than an amigo and we had to burn several tobacco fields, blow up chemical tanks, and taking out all the government troops and employees we could find. That yielded a bonanza of resources, most notably gasoline, and generally proved pretty satisfying.

Handily, the structure of Ubisoft’s hands-on demo then allowed us to move to a part of the mainland, called El Este (Isla Santuario, therefore, can be viewed as a sort of tutorial island). Handily, that also meant we had been tooled up with some more advanced weaponry and gear, and had our rank upgraded.

The main pillar of Far Cry 6’s character progression system is your ranking: as you take on Castillo and liberate districts of Yara from his yoke, you rank up. This brings perks and new abilities (which, sadly, we weren’t able to investigate in detail) but also higher levels of attention from government troops.

There are two other elements which play into Far Cry 6’s character progression. The first is gear: the game’s gear system is completely different to that of previous iterations. As you complete missions and activities you acquire a vast amount of gear and just about every part of your body has a gear slot. Each item of gear you acquire, meanwhile, has a specific effect, such as increasing your resistance to fire, poisonous chemicals, soft tissue ammo or armour-piercing ammo. Or it may help regenerate health or give more specific perks.

Thus, the gear you equip plays strongly into your general stats, and you can give yourself specific properties that pertain to whatever mission you’re attempting. It’s a simple but interesting system. The weaponry, too, mirrors it to an extent. The Resolver workbenches, for example, let you customise one weapon so that it fires armour-piercing rounds and tweak another one to fire soft tissue rounds, so you can respond, for example, to whether or not the enemies you face are armoured or not.

When we were then transported to a point further into the game, the weaponry was noticeably more powerful and precise, so that clearly evolves as your character progresses.

On the mainland, we also discovered that Libertad aren’t the only anti-Castillo guerrillas in town. Our first task was to rendezvous with the so-called Legends of 67 – a bunch of grizzled veterans holed out in a mountain top eyrie who had led Yara’s 1967 revolution which, presumably, ended up with Castillo seizing power.

Reaching their camp involved an epic vertical traversal sequence reminiscent of a Tomb Raider game, and once there, we discovered another bunch of entertaining characters, led by the avuncular ex-freedom fighter El Tigre. A quartermaster in the Legends camp opened up another gameplay mechanism: the ability to add buildings to your camp in exchange for benefits such as extra soldiers and better health recovery.

The first mission we performed from El Tigre’s camp involved collecting resources from a downed chopper, where we met another guerrilla group calling themselves El Moral. After fighting off waves of government troops, taking out an anti-aircraft rocket array and stealing a helicopter, we were able to keep the resources – which El Moral also claimed – for ourselves, after agreeing to introduce El Moral’s leader to El Tigre. The reverence in which the Legends of 67 are held is one of Far Cry 6’s many sub-plots; another being Castillo’s desire to groom his son, Diego, to follow in his footsteps.

Since it is number six in the franchise, not counting spin-offs and expansions, it’s hard to pretend you don’t know what you’re getting with Far Cry 6, but in gameplay terms this doesn’t feel like it’s just trending water. The combat has plenty of room for differing tactics and the resource collection and wide range of weapons and equipment is immediately impressive.

Story-wise, the Far Cry games have always usually been a step above the Tom Clancy titles, with some fun characters and the promise of a political edge that other Ubisoft games try to avoid. Whether Giancarlo Esposito’s villain will equal the likes of Vaas and Pagan Min remains to be seen but it’s clear the developers realise how important that is to the series’ appeal.

At the preview stage, it’s impossible to tell whether a game will hang together as well as it should or if, like a movie trailer, you’ve already seen all the best parts, but everything so far about Far Cry 6 seems very positive, with no signs of the tiredness you’d usually associate with a franchise with this many iterations under its belt.

Related posts:
Best News
18 Creepy Horror-Themed Minecraft Maps
Overwatch 2 and Stadia Are What Happen When Game Companies Don’t Care About You
Hokko Life: Everything You Need To Know About Merits
Makoto Shinkai Is Really Going To Make The Same Film Three Times In A Row
Super Mario Bros. UE Remake Brings In Realistic Chris Pratt
Recent Posts
This website uses cookies to improve your user experience and to provide you with advertisements that are relevant to your interests. By continuing to browse the site you are agreeing to our use of cookies.Ok