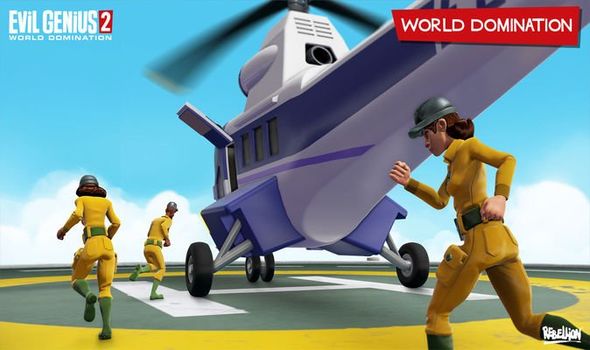 UK developers Rebellion has confirmed that it will be launching Evil Genius 2: World Domination on March 30, 2021.

The news comes after a long wait for fans of the first game, which was originally launched back in 2004.

The sequel, much like the first game, will allow fans to build their own secret lair and hatch secret plots, all while avoiding taking on world governments and undercover agents.

Evil Genius 2: World Domination is being treated as a sequel rather than a remaster, meaning that the development team has had more wiggle room when making changes.

And instead of going down the route of a complete reboot, Rebellion has chosen to enhance, rather than replace the original gameplay.

This has been done to great effect in recent years, with titles like XCOM 2 and Age of Empire 2 Definitive Edition, paving the way.

The good news is that Evil Genius 2 is going include all the things that made the first one great, including the ability to build a massive underground lair, complete with nefarious tools to be used in your quest for world domination.

To cover all this up, Evil Genius allowed you to build a cover business on your island location. But as many gamers will have notice from the new trailer released today, Evil Genius 2 allows you to integrate your hotel or Casino front as part of your lair setup.

This means that Do-gooder agents trying to thwart your plans will be able to snoop around in ways more akin to a James Bond film.

Before the big launch on Steam, here’s what Rebellion has confirmed will be available when the game arrives on PC later this year:

Guide your chosen evil genius through their own unique story campaign as they impose their twisted vision upon an unsuspecting globe.

Three island locations – choose where to build your supervillain HQ from three island paradises, each with their own gameplay challenges.

From the outside your base looks like a beautiful casino resort, but behind closed doors lies all manner of unimaginable evil.

Intuitive lair-building – design, build and customize your lair as you see fit. With modern base-building mechanics and loads of gameplay features totally new to the series, including multiple-floored lairs, strategy fans will feel right at home with Evil Genius 2.

New rooms, henchmen, agents, traps and more – as showcased in today’s trailer, Evil Genius 2 features tons of menacing characters and devilish contraptions to use in your lair.

From the deliciously fatal Sushi Chef to the always famished Venus Spy-Trap, you have a huge number of ways to stop the Forces of Justice from foiling your dastardly plans.

World domination 2.0 – Take to the world stage and execute your campaign of total supremacy. Send your minions and henchmen on missions across the globe as you exert your influence and control over world regions.

Complete lucrative schemes, expand your criminal network, recruit new henchmen and steal all manner of useful loot – from the Doors to Fort Knox to a living, breathing dodo.

Rebellion has also confirmed that Evil Genius 2 is a single-player experience, meaning there won’t be able any multiplayer options included.