Home » News » Earthbound: How To Find The Sword Of Kings And The Rest Of Poo’s Equipment

Earthbound: How To Find The Sword Of Kings And The Rest Of Poo’s Equipment

While it can get a bit wacky and bizarre at times, Earthbound features some pretty standard RPG mechanics. Like most role-playing games, your party members all acquire and equip various weapons and gear that affect their offense, defense, and other stats. The only exception to this is Poo, whose stats actually decrease if you try to equip anything on him that isn't specifically made for him.

For whatever reason, some of the rarest or hardest-to-find items in all of Earthbound belong to Poo. As many are rediscovering the cult classic SNES RPG due to its release on Nintendo Switch Online, we've made this guide to help you locate the equipment for Poo to make the fight against Giygas a little bit easier. 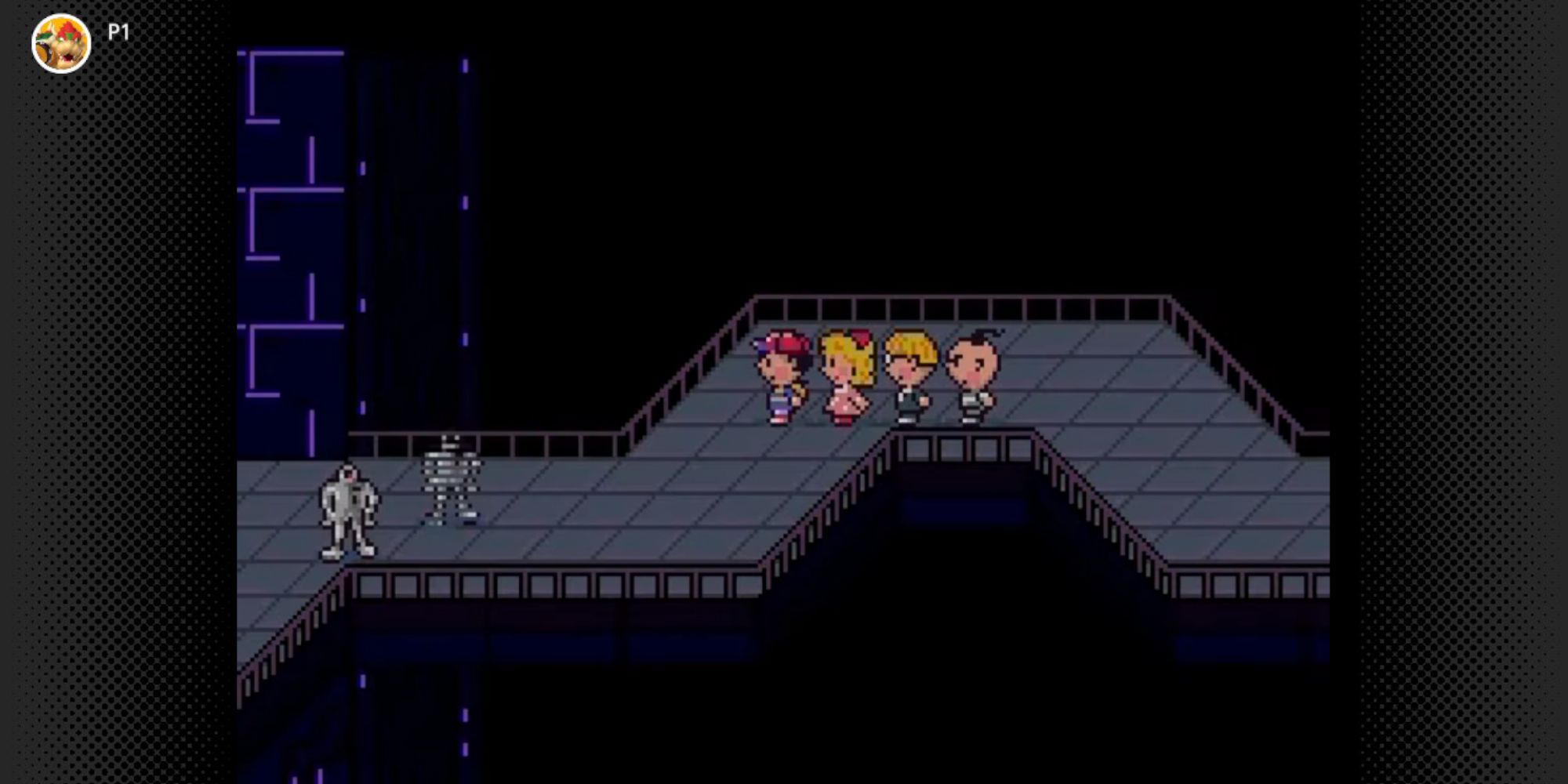 This is the only weapon that Poo can equip effectively. While you can give him yo-yos or slingshots, those will reduce his attack power. Unless you find the Sword Of Kings, Poo will remain unarmed throughout all of Earthbound. Unfortunately, getting the Sword Of Kings isn't going to be an easy task. In fact, it may be the hardest item to get in the entire game.

It can only be acquired during one specific point in Earthbound. After you reach the Tenda Village in the Deep Darkness swamp, you'll speak with the chief who will inform you that the people of his village are too shy to talk to you. In order to help them get over their shyness, you need to give them a book called Overcoming Shyness. You won't know how to get this book until you leave the village.

Once you do, you'll receive a phone call from Apple Kid, who will tell you that he's currently at the lab of Dr. Andonuts working on an Eraser Eraser. Then some kind of commotion happens over the phone and the call abruptly ends. Afterward, Orange Kid will call asking about the location of Apple Kid as he wanted to borrow a book from him. Sure enough, that book is Overcoming Shyness. So you now need to travel to Winters and track down the location of Apple Kid.

Teleport to Winters and make your way to Dr. Andonuts' lab. It's a good idea to have the Pencil Eraser on hand to erase a pencil statue that will be in your way. Otherwise, you'll have to walk through Brick Road's Maze again. Once you get to the lab, a mouse will hand you the Eraser Eraser. Now go into the hole in the middle of Stonehenge, which you saw just before you got to the lab. Descend down the ladder and enter the area known as Stonehenge Base. Use the Eraser Eraser on an eraser statue that's up ahead, and you'll now be in the area where you can search for the Sword Of Kings.

To obtain this mythical sword, you need to fight a specific, orange-colored brand of the Starman enemy type called the Starman Super. These guys will pop up all over the place inside Stonehenge Base. One of these baddies will drop the Sword Of Kings upon being defeated. Sounds easy enough, right? Well, the bad news is that there's a 1 in 128 chance of the sword being dropped at the end of the battle. So you essentially need to keep fighting Starman Supers over and over again until one of them gives you this rare weapon. This could happen quickly, or it could take several hours.

If you truly want this sword, it's a good idea for your party members to have a level around the mid-fifties to make this not too challenging. If you can get their levels around the early to mid-sixties, you may even be able to score instant wins against the Starman Supers, which would dramatically speed up this process. Of course, doing this may require quite a bit of XP grinding. Having the Casey Bat equipped on Ness will also increase the chances of getting instant wins, although it may be a good idea to take that off him once you get into any real fights since your swings will miss most of the time with it.

Starman Supers usually have PSI Shield β active, which will reflect your PSI attacks back at you. So it's best to stick to physical attacks to damage them. Their main attack is to fire a beam at you, which shouldn't hit you too hard depending on your level. The worst thing they can do is occasionally call other enemies into the fight to help them. If other enemies do appear, Starman Supers can use Healing Ω to revive their fallen comrades after you've beaten them. They can be an annoying battle, but they're not so hard once you're used to their tricks.

You can keep grinding for the Sword Of Kings for as long as you want unless you defeat the boss of this area, Starman Deluxe. Once you kill him and rescue the kidnapped NPCs in the Stonehenge Base, all of the Starman Supers will vanish forever along with your chances of ever finding the Sword Of Kings. 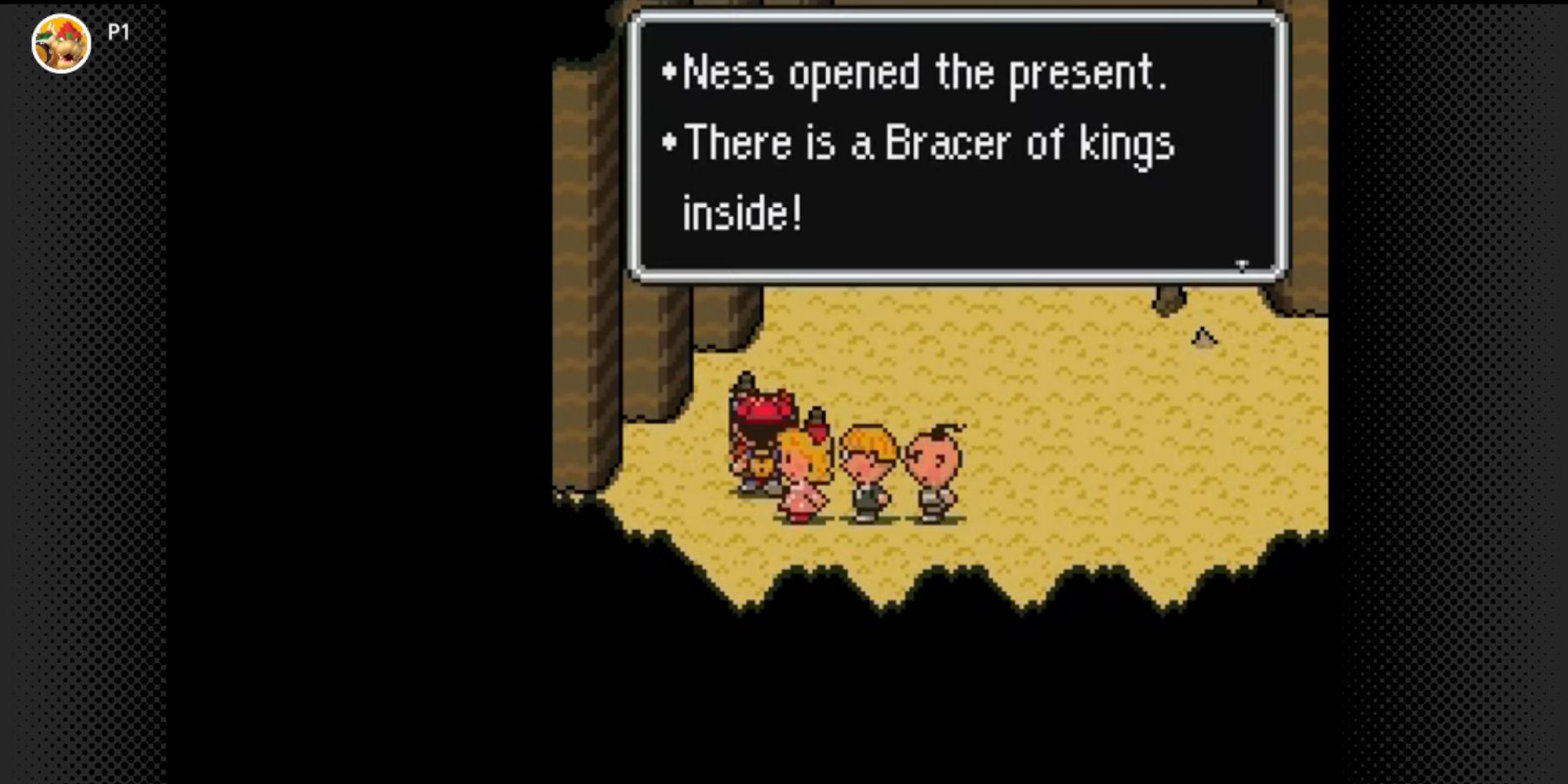 Thankfully, the rest of Poo's gear is much easier to acquire than the Sword Of Kings. The Bracer Of Kings is the only piece of equipment that Poo can equip on his arms that will increase his defense. It can be found when you head to Pink Cloud, the sixth Your Sanctuary location located in Poo's homeland of Dalaam.

To get to Pink Cloud, you first need to reach Magnet Hill, which is found by traveling through the Fourside Sewers after you give Mr. Spoon an autographed banana peel from his favorite singer, Venus (this is a delightfully silly game.) After you beat the Sanctuary Guard, the Plague Rat Of Doom, and record the Magnet Hill melody on your Sound Stone, you'll notice a Dalaam-style gift box sitting nearby. Open it up to get the Carrot Key, which will let you erase the rabbit statues that are blocking the entrance to Pink Cloud.

Head back to Dalaam and use the key to get inside the cave. Walk all the way to the left, go through the doorway, and climb down the rope. At the bottom, you'll find a gift box containing the Bracer Of Kings. 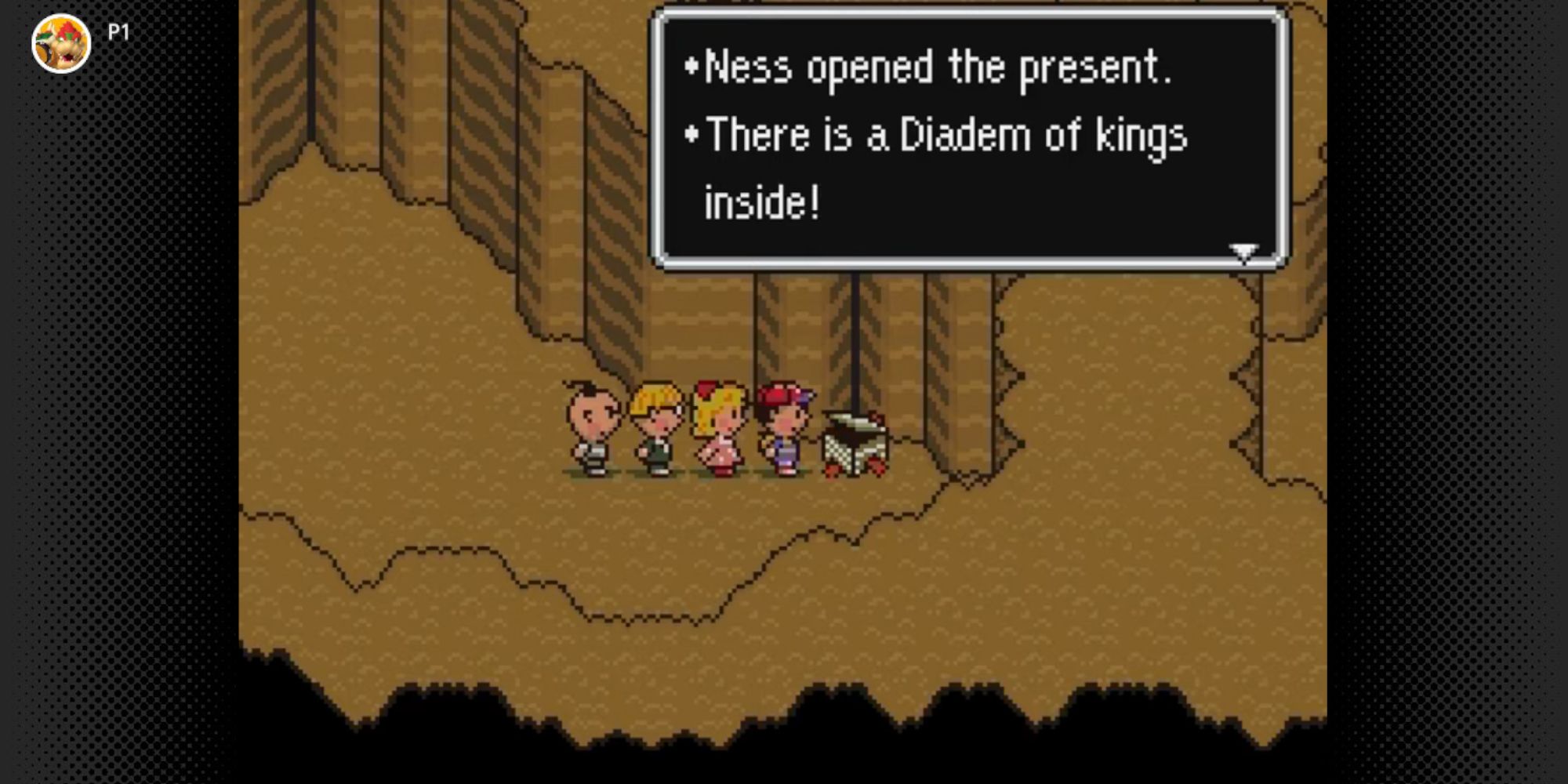 The Diadem Of Kings is what you equip in Poo's other equipment slot. It's found in the cave of Lumine Hall, the seventh Your Sanctuary location. You'll get here after you rescue Apple Kid and the others who were kidnapped and stored inside the Stonehenge Base (hopefully you'll have gotten your hands on the Sword Of Kings by this point too.) He'll tell you that he returned the Overcoming Shyness book to the Onett Library. Go there, check out the book, give it to the people of Tenda Village, and they'll open up the entrance to Lumine Hall.

From the entrance, head all the way to the left until you reach a ladder descending into a hole. Head down, and you'll come across a gift box containing an IQ Capsule and another ladder. Go up that ladder, walk to the right, fight any enemies that get in your way, and you'll find the Diadem Of Kings inside a gift box. 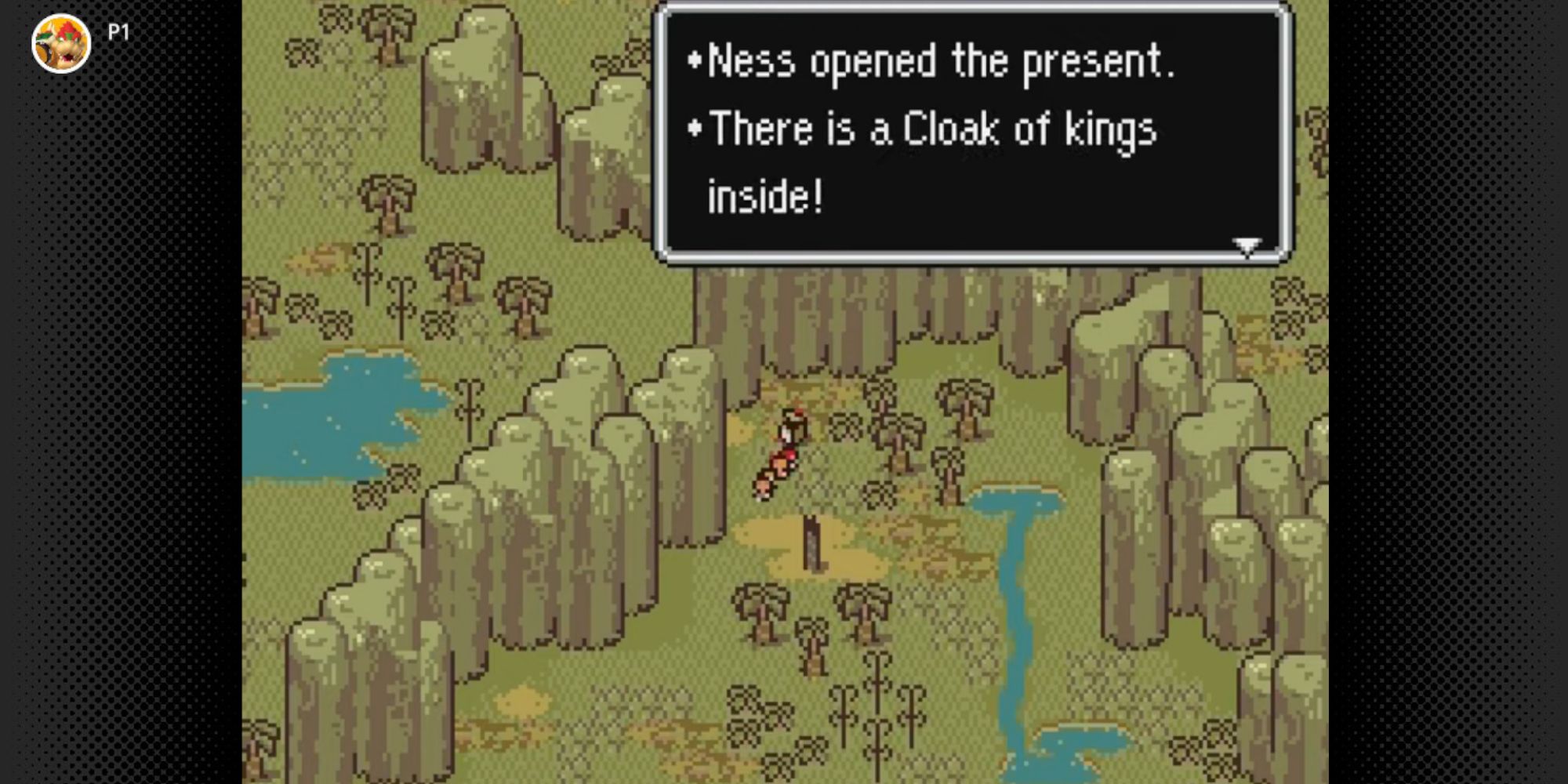 All that's left to find is the piece of gear for Poo's body, the Cloak Of Kings. This will be found in the Lost Underground, the land that you discover after you travel past Lumine Hall. Here, dinosaurs roam, and your party will appear to be very tiny. This item can be rather difficult to obtain since there are very strong enemies like Chompasaurs and Ego Orbs that can annihilate your team.

When you reach the second Tenda Village and speak with the talking rock there, go southwest. You'll have to walk around some tall rocks and avoid being stomped to death by dinosaurs. You should be able to spot the gift box, and inside will be the Cloak Of Kings.

You'll now have a fully kitted out Poo, which should make you almost unstoppable against Giygas' forces. After all, if you could defeat dozens upon dozens of Starman Supers just to get a sword, battling some unknowable cosmic entity capable of totally destroying the world should be a piece of cake.