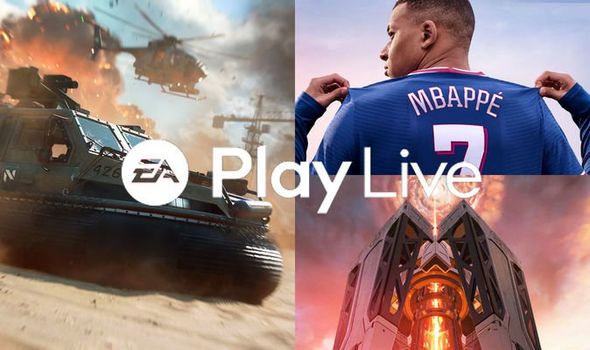 EA Play Live 2021 is kicking off today, with gaming giant EA set to reveal more on its biggest games of the year. Battlefield 2042 will be the big headline act, while news on Apex Legends season 10 – Emergence – will also drop during the stream today. Today’s broadcast is expected to last for around 40 minutes and will have a start time of 6pm BST.

For those in other regions that’s 7pm CEST, 1pm eastern time and 10am pacific time on Thursday July 22.

You can also watch the YouTube embed video for the EA Play Live 2021 stream in this article.

In the run-up to EA Play Live 2021 the official Electronic Arts Twitter account posted: “#EAPlayLive starts tomorrow at 10AM PT/1PM ET! The pre-show is hosted by EA’s @TheRealAndyMc and Respawn’s @alex_frostwolf.”

After skipping their typical pre-E3 slot, EA have been doing things slightly different with its annual EA Play Live event.

Ahead of today’s big stream there have been a series of EA Play Live Spotlight broadcasts.

These focused on different games, with the inaugural broadcast about Apex Legends and Battlefield 2042 and the last one – which aired earlier this week – about FIFA 22.

However, these spotlight streams didn’t announce some key information – such as the beta date for Battlefield 2042 and the release date for FIFA 22.

Hopefully we’ll find out more about these highly anticipated dates that gamers want to put down in their diaries.

Elsewhere, in the run-up to EA Play Live 2021 a number of leaks could have hinted at some surprise announcements EA has up its sleeve.

It’s been rumoured that EA will be reviving the iconic Dead Space survival horror series, with a reveal potentially happening during EA Play Live 2021.

While elsewhere Amazon could have leaked another game that could get revealed during the EA stream today.

A mysterious EA game called ‘Project C’ has been listed on Amazon for the PS5.

This news was spotted by PSU who revealed it in a post online. The Amazon listing for the unannounced PS5 game was swiftly taken down.

It remains to be seen what this project is, but C could be a reference to Codemasters – who this year joined the EA family.

The racing game specialists have just released F1 2021, but there’s plenty of other games they could have in the pipelines.

Could we see another DIRT Rally game, Project Cars 4, another GRID game or maybe even the return of a long lost franchise like Micro Machines or TOCA Touring Cars?

This remains to be seen, but fans don’t have long to wait to find out for certain with the EA Play Live 2021 start time fast approaching.