In Dynasty Warriors 9 Empires, brute force isn't going to get you extremely far in the game, especially on the greater difficulties, which can be rather brutal. Instead, you'll have to employ a fair bit of strategy, and part of that is efficient utilization of the Secret Plans you have access to.

Secret Plans come in two flavors, and both are unhelpfully given the same exact name. The first flavor is Personal Secret Plans, up to four special abilities that you can use by defeating enemies to charge them up, like Musou Attacks. The second flavor is Grand Secret Plans, which are stratagems that can affect entire battlefields at a time to give you an edge. Both you and your enemies will have a Grand Secret Plan. 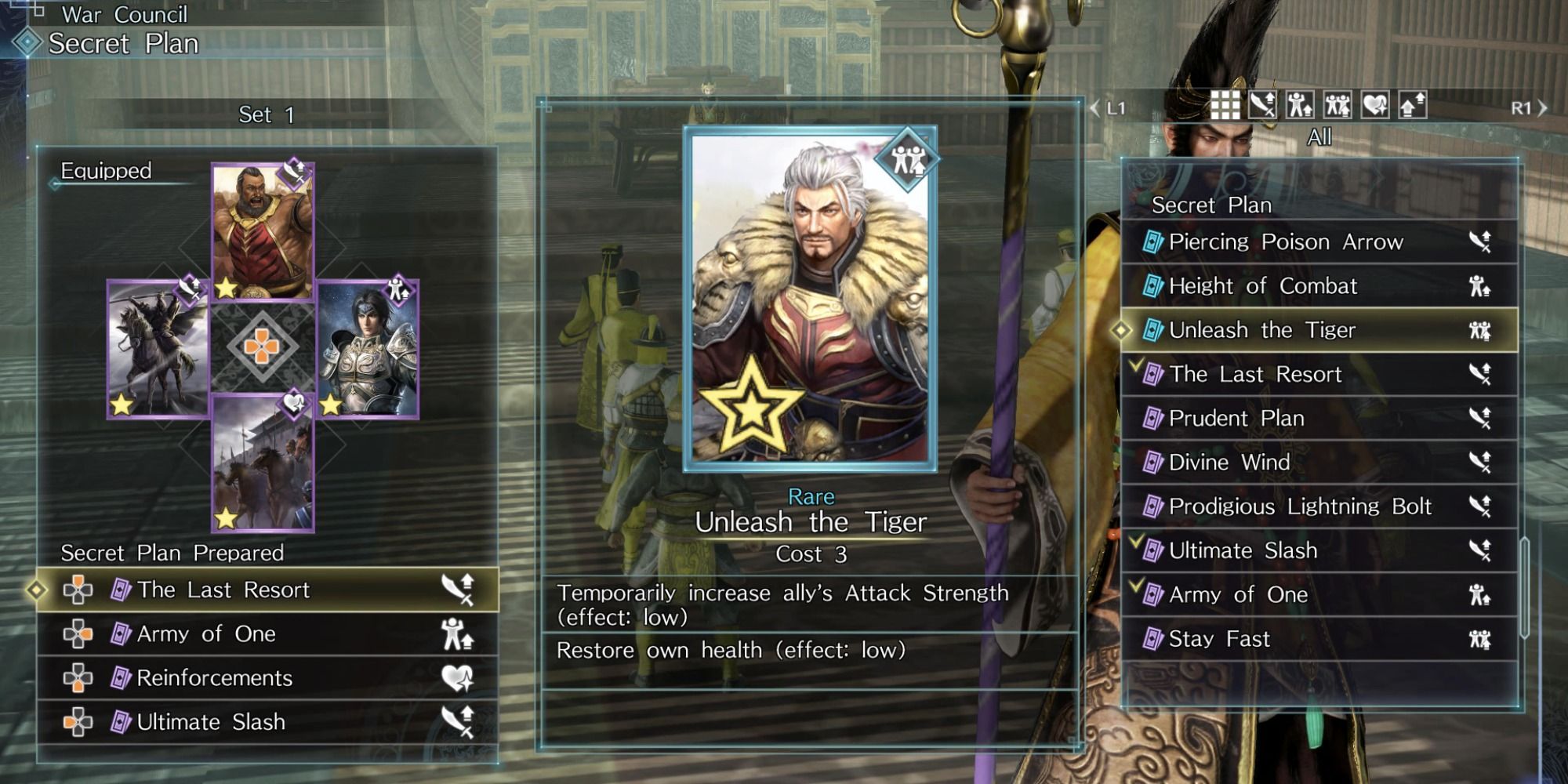 In simplest terms, you can think of Personal Secret Plans as equippable special abilities. They come in four different rarities and are acquired by completing battles, unlocking certain Titles, or as gifts from officers that like you.

Personal Secret Plans have a wide range of effects that you may trigger at will, so long as they are charged up through defeating enemies. These are:

The main focus of Attack Plans is to deal a lot of damage in a very short amount of time. Most of these attacks are elemental and have their own properties listed in the next section.

Single Unit Upgrades improve the user's stats, usually their attack power or speed, for a short period of time. Area Upgrades will do this for all nearby allies. In a similar vein, Restore Plans will fill your health bar or, rarely, your Musou Gauge.

Special Plans are unique in their effects, and there are fewer of them as a result. Their effects range from nullifying the Army Affinity triangle to filling the Secret Plan Gauge for the other Secret Plans you have.

While a plan may be of one category, many Secret Plans have secondary effects. For example, an ice attack plan may also heal the user's health a little. Think of these as bonus effects.

Acquiring more than one of the same Personal Secret Plan will level that plan up, adding more stars to the bottom of the plan's card. At the final level, a single giant star will replace the smaller stars. As a Secret Plan levels up, the charge needed to use it decreases. This makes it so that lower rarity Secret Plans remain somewhat attractive even when you have stronger plans since you will be able to use them more often.

Most Attack Plans have an elemental affinity that shapes the effect of the ability. For example, flame attacks will cause a large explosion in front of you, while lightning attacks will cause a beam of electricity to shoot out in a straight line. Understanding the shapes of these attacks will come with practice, but it's also useful to know what properties elemental attacks have in Dynasty Warriors 9 Empires. 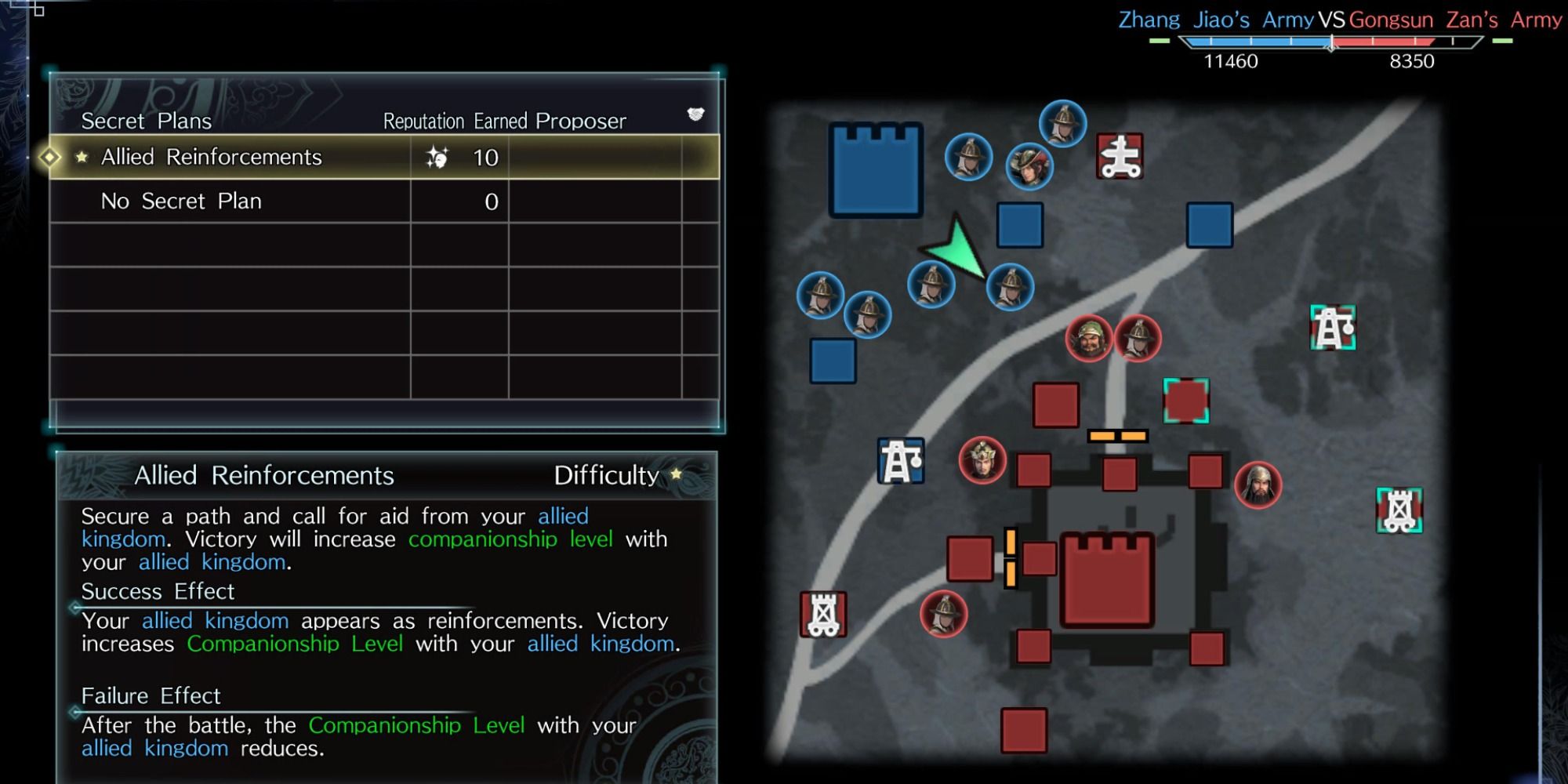 You will be prompted to pick a Grand Secret Plan at the beginning of a battle. These stratagems will greatly affect the flow of combat and give you a great advantage. Secret Plans are proposed by the officers taking part in the battle, with officers who like you being more likely to propose a plan.

Grand Secret Plans are associated with Titles – each Title has a plan, and an officer can only propose the same plan related to their Title. This makes it beneficial to find a Title that syncs up well with your favorite Secret Plan. If you choose a plan suggested by an officer, your relationship with them will improve if you manage to pull it off. If it fails, your relationship will suffer.

The only Secret Plan that doesn't have to be suggested by an Officer is the Call Reinforcements plan. This requires that you have an allied kingdom on which to call for aid. Successfully fulfilling this plan's requirements will lead to more allied officers and soldiers coming to your side of the battle and will increase your relationship score with all officers who join.

Early on in a battle, you'll be prompted to lay the groundwork of your Secret Plan, giving you an objective. Common objectives for Secret Plans include:

Your Secret Plan will resolve and hopefully give you an advantage if you are successful. Some of the most potent plans will cause environmental effects across the battlefield, such as massive hailstones, tornados, or puddles of poison to damage the enemy. Another great plan is a Night Attack, which requires hasty work at the beginning of the battle but will reduce the power of every enemy officer if successful.

Whether you succeed or fail at your plan, the enemy's Secret Plan will immediately start to take place. It's up to you and your forces to disrupt the enemy's Secret Plan – you'll be given objectives rather similar to the ones required to succeed at your own plan. The only exception to this is if the enemy summons an elemental beast. In this case, the beast is simply summoned and must be taken down to "prevent" their plan.

Fighting elemental beasts is a huge pain and more like a Monster Hunter game than Dynasty Warriors. You should time your combos well and aim for their backs to avoid a nasty bite or claw attack. Prompts for Stun Attacks can appear at certain times, and pulling these off will give you a nice breathing window. Don't bite off more than you can chew, and use the dodge button liberally to win the day.

At the end of a battle, you will receive Merit points if you managed to ensure the success of your Secret Plan and for foiling the enemy's Secret Plan.