In the Digimon Card Game, the real winner of the Xros Encounter black set of cards is DarkKnightmon. A deck that was given support for three sets in a row, but was never a competitive deck due to its high Memory costs and lack of search power besides generic search cards.

Even though most of the good black cards in the set are used to power up the DarkKnightmon strategy, decks like Xros Heart and even RagnaLoardmon get a boost from a few black cards in Xros Encounter. From searchers to Tamers, Black decks are slowly getting more and more playable cards with every passing set. 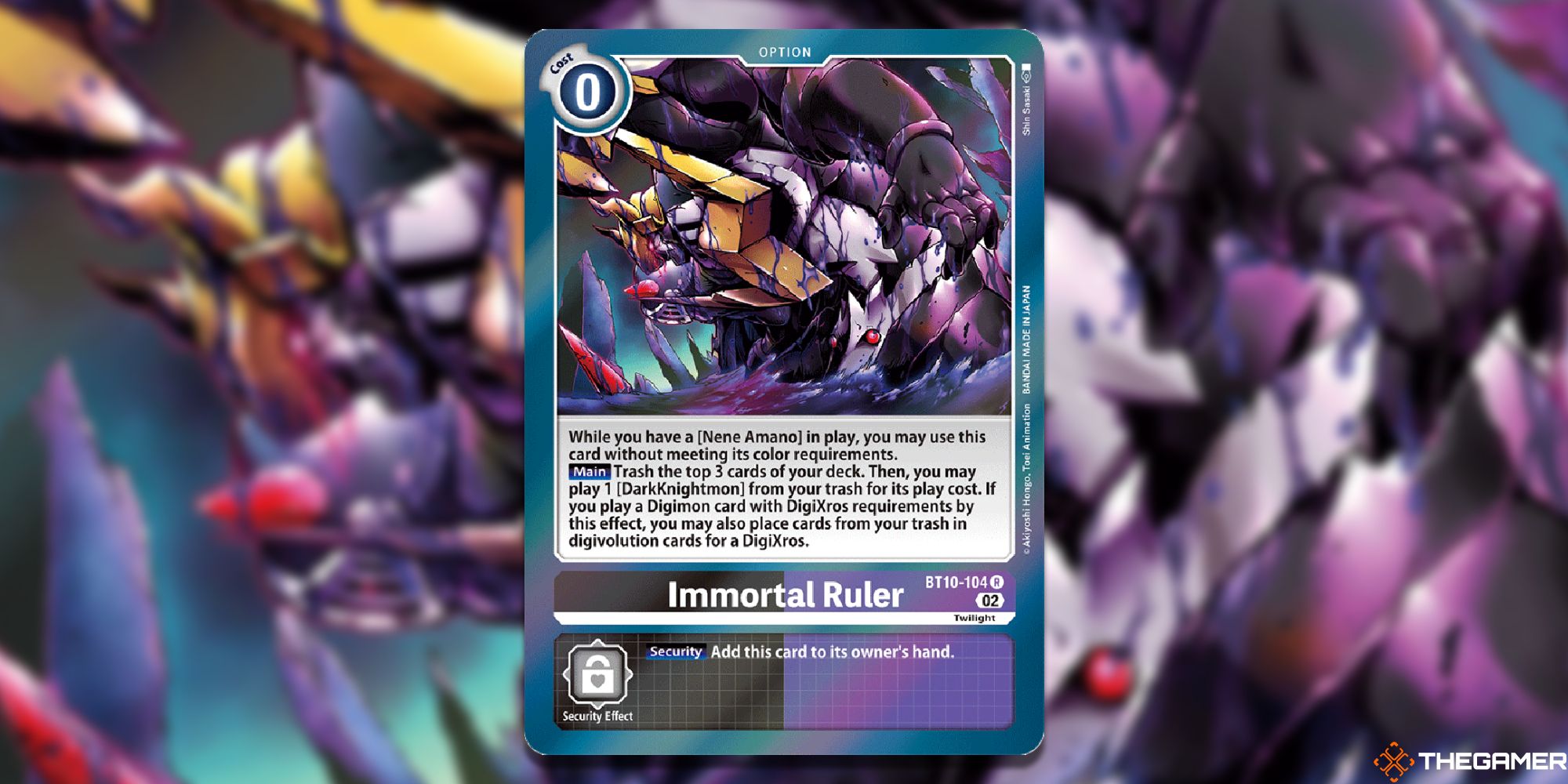 Although a bit slow, Immortal Ruler can help out in the late game when the trash is filled with used cards. You can ignore the color requirements of the card if you have Nene Amano in play, but very few DarkKnightmon builds opt to run any other cards besides black.

It almost feels like a panic button since, when Nene is in play, all of your DarkKnightmon gain Blocker to safely protect your Security cards and get you back in the game. 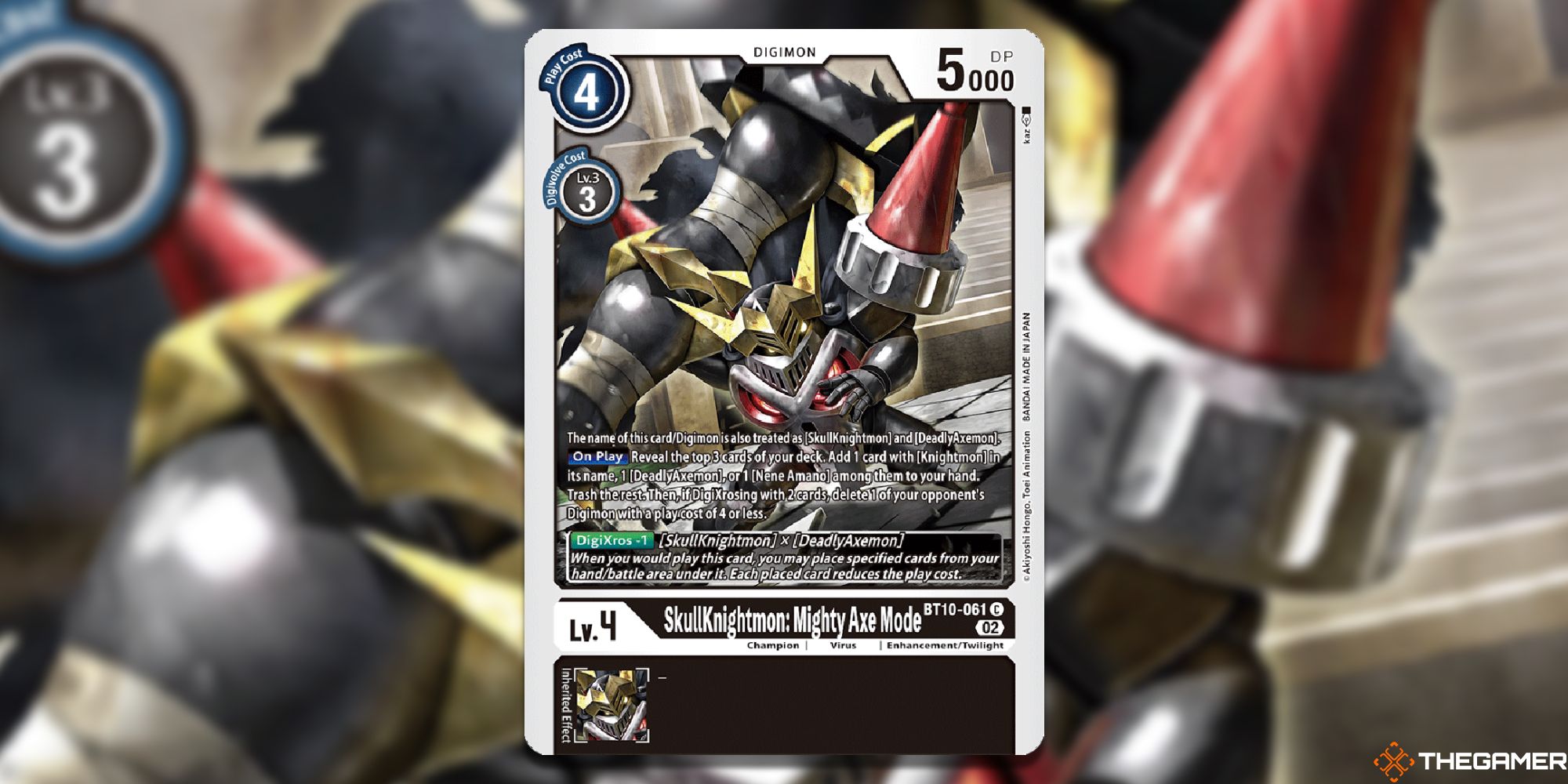 One of the best cards in the DarkKnightmon arsenal, SkullKnightmon: Mighty Axe Mode is one of the new cards that carry the DigiXros mechanic. By DigiXros with two Digimon, SkullKnightmon becomes a two-cost Champion Digimon. Hands down, the cheapest Champion in the game.

Not only is this card cheap to play, but it also has powerful effects like a search for other DarkKnightmon pieces from your deck and a deletion on a four-cost Digimon, deleting problematic floodgate Rookies. 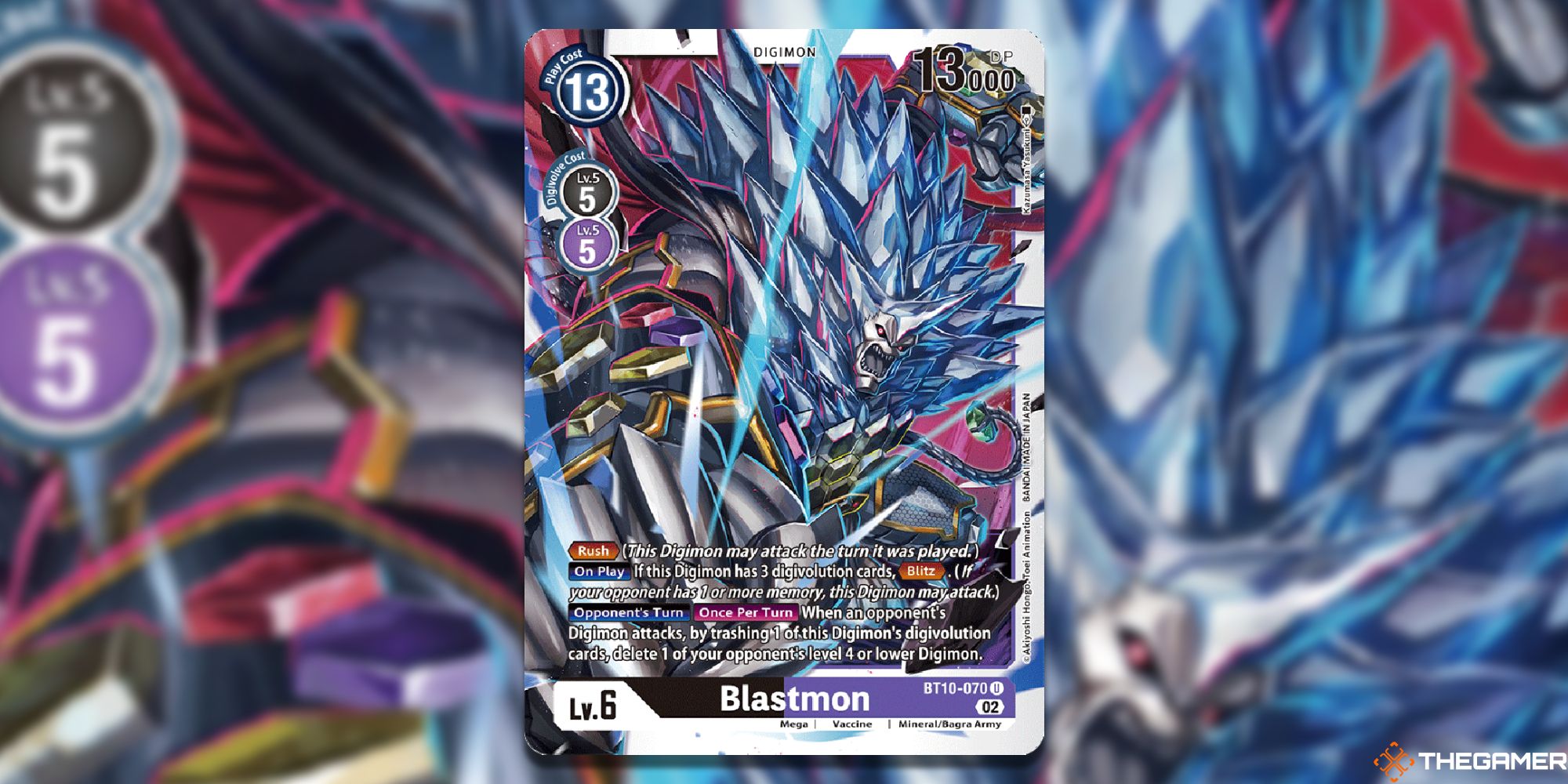 Most of the Bagra Army cards are purple, yet Bandai decided to make one of its boss Digimon mainly a black card. Blastmon is a huge 13,000 DP beatstick for the archetype. Even though Blastmon has a built-in deletion effect against level four Digimon, it's not something that comes up as much, bar certain matchups like Bloomlordmon.

Having a huge Digimon with Rush and Blitz to possibly close out the game is a huge benefit to any deck. 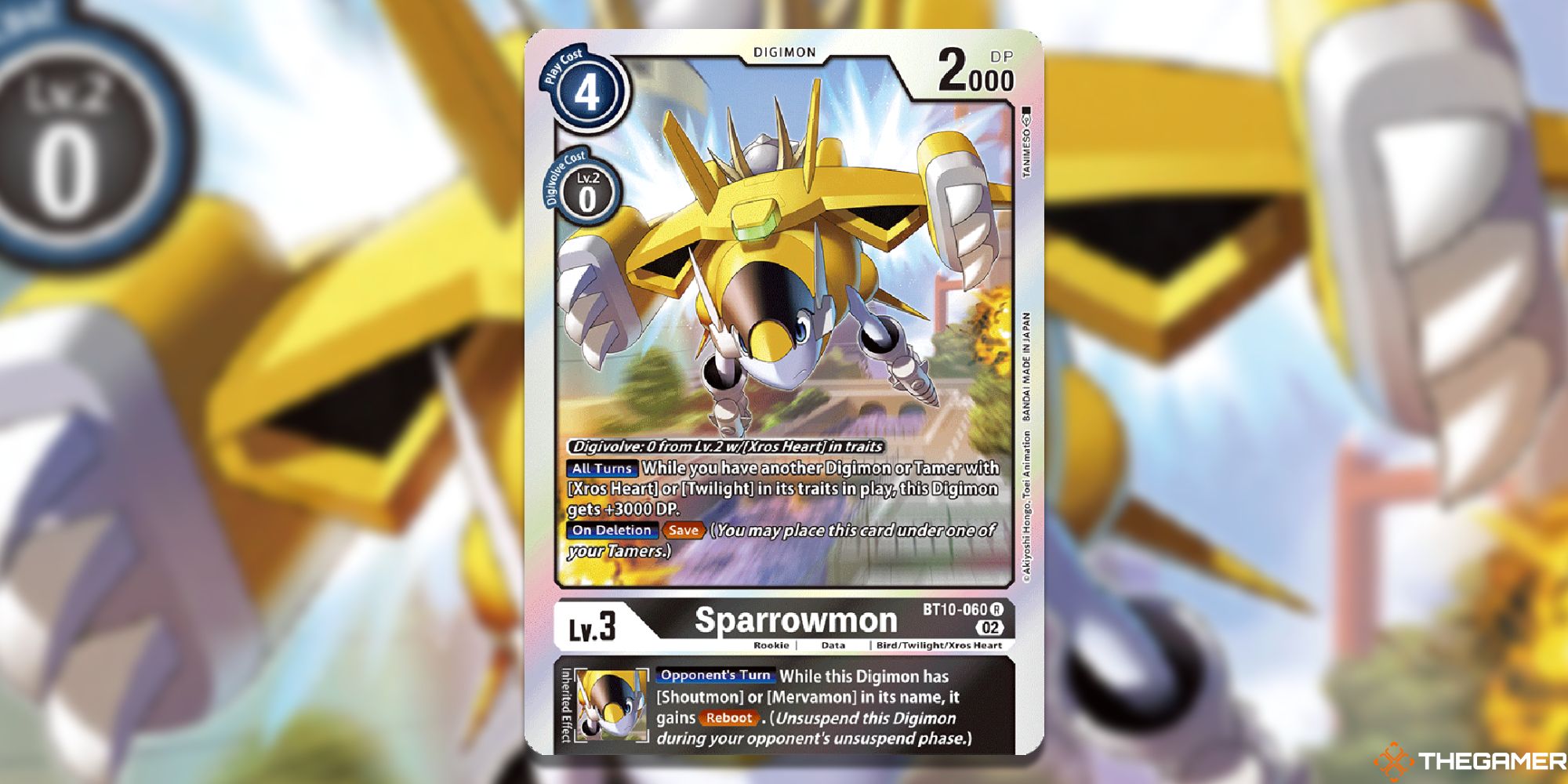 This little guy might seem underwhelming at first but Sparrowmon can become a big problem. With the new Xros Heart deck, you usually want to promote your Rookie into the Battle Area right away and attack, so you can get the extra card draw from the Pickmons inheritable. This is where Sparrowmon comes in. While you have a Tamer in play, Sparrowmon becomes a 5,000 DP attacker.

It may not seem much, but depending on the opponent's Security, 5,000 DP can attack over quite a few things. 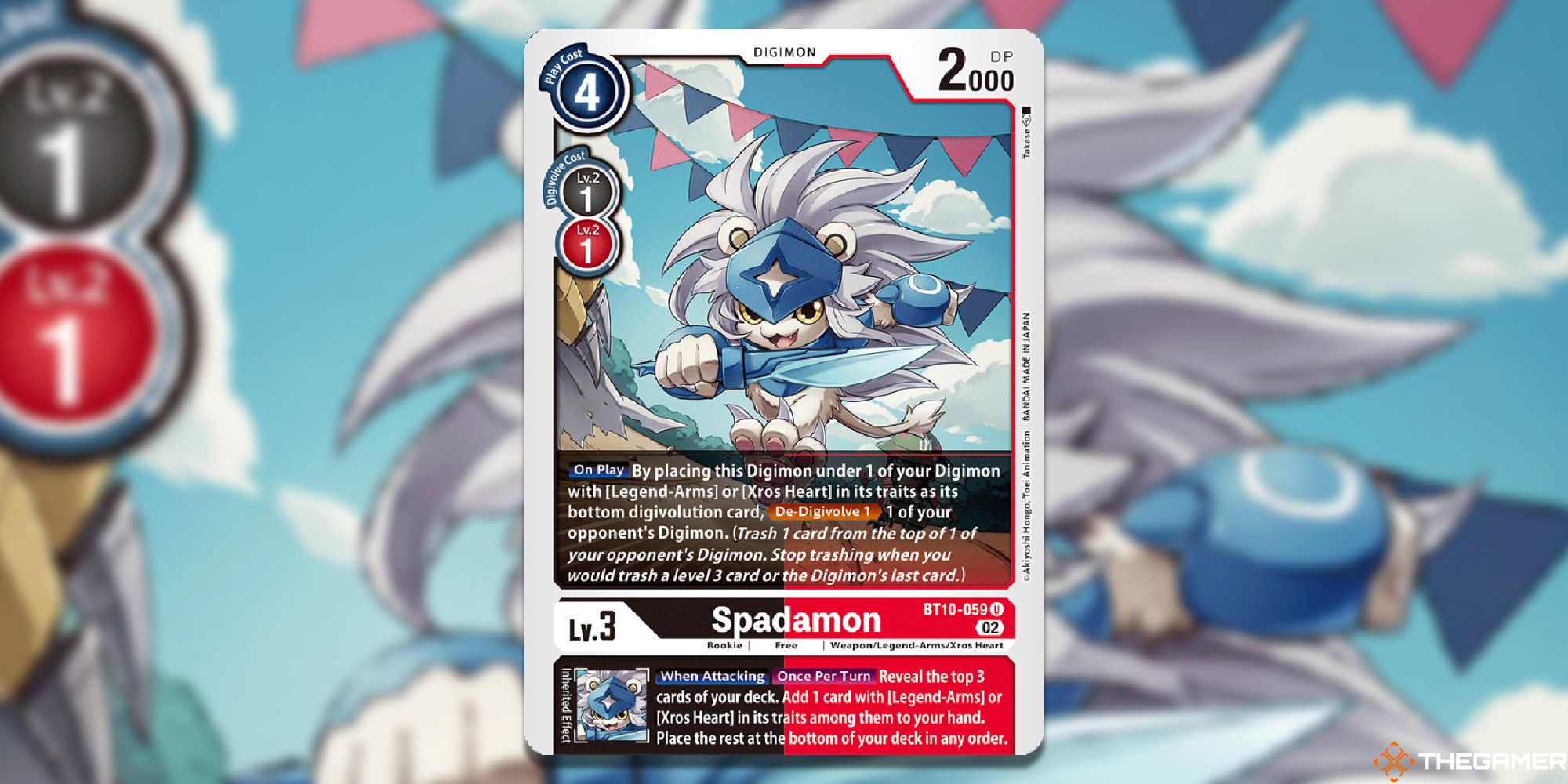 BT10 Xros Encounter introduced tons of new Rookie level Digimon with almost game-changing effects. Spadamon is one of those cards that is very slept on. This card is a De-Digivolve for a cost of four memory. 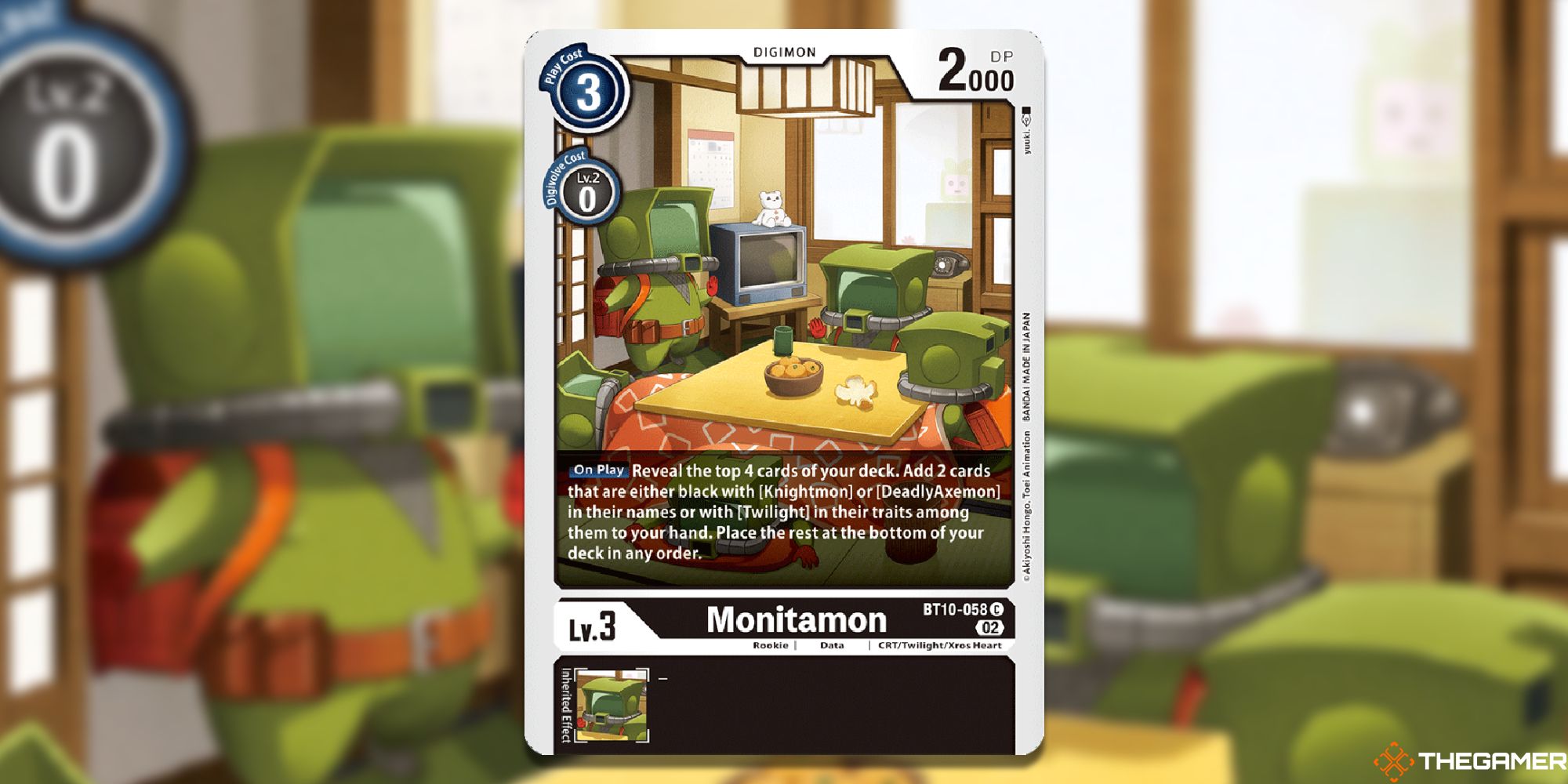 One of the biggest things that DarkKnightmon needed to make the deck viable in any way is Monitamon.

It's a three-cost in-archetype searcher that fetches you two combo pieces, and, at times, Monitamon can grab exactly what you need to bring out your DarkKnightmon using the DigiXros mechanic and start establishing a presence in the Battle Area. It can also look for Nene Amano since she is a Twilight-trait card. Plus, look at them! They're just hanging out in a kotatsu while waiting for their friend! 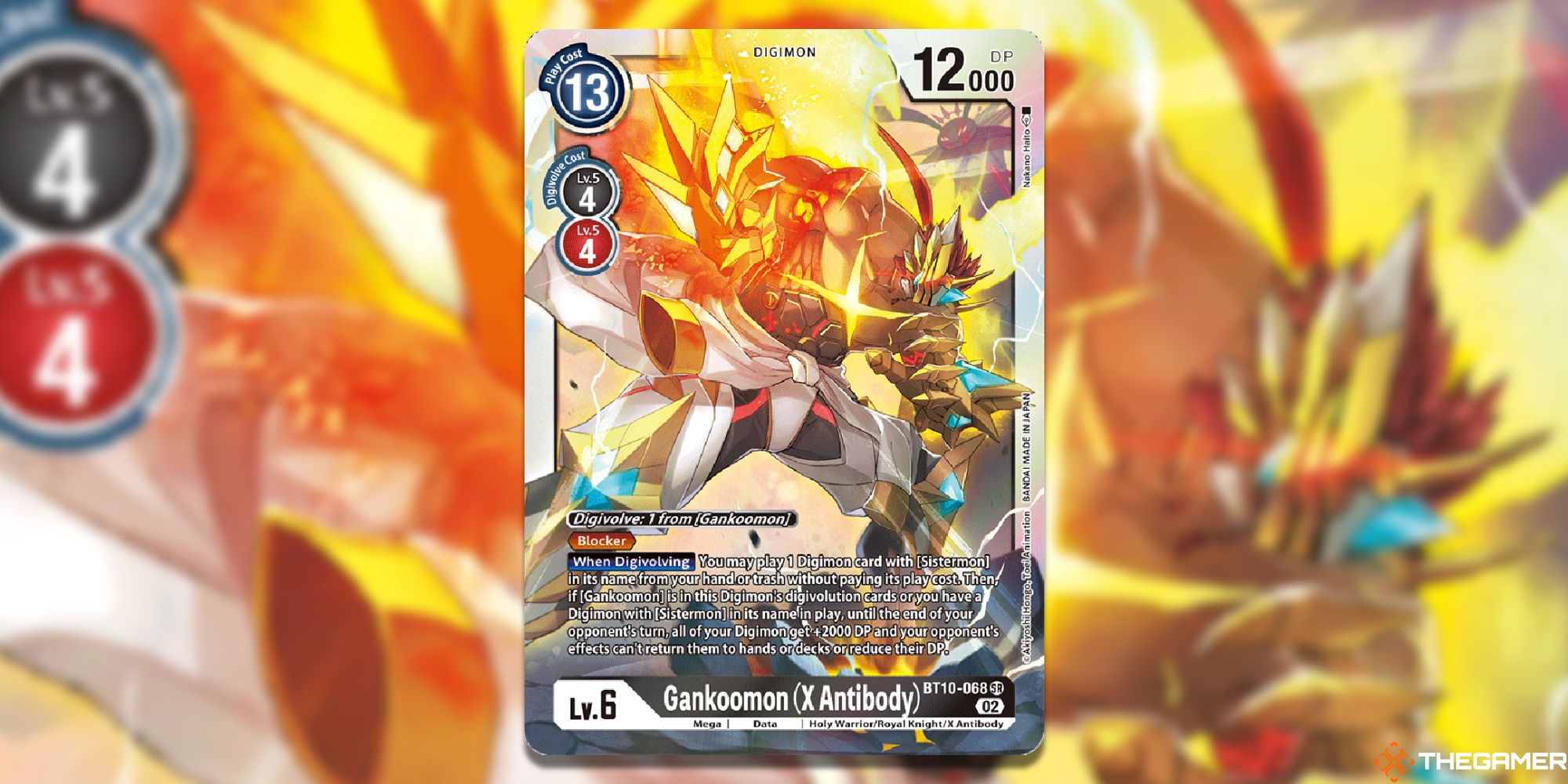 Gankoomon has never had a real deck to call his own. He's been constantly relegated to a Blocker deck or Jesmon support. Sadly, this time is no different. Gankoomon (X Antibody) is a neat card but there just aren't enough Gankoomon-specific cards to warrant a deck.

At this point in the game, he is better off at supporting the stronger Jesmon deck, which already does what Gankoomon X already wants to do, playing a myriad of Sistermon and protecting them from effects at the same time. 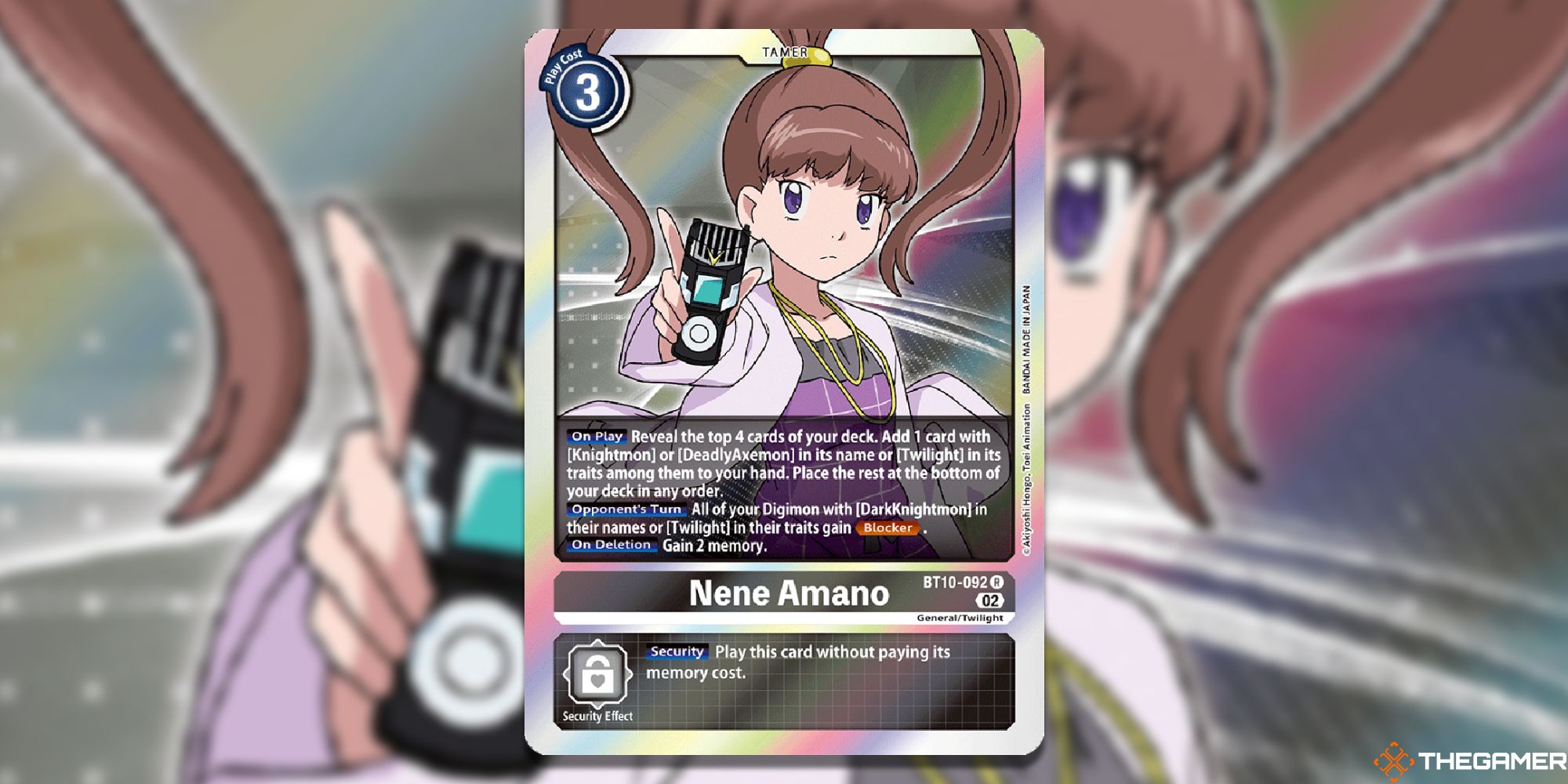 Nene Amano is the first Tamer in the Digimon Card Game with an On Deletion effect. There aren't many cards that can delete Tamers as it is, and that just shows how powerful and frustrating Nene Amano can be. This card is a searcher for the DarkKnightmon archetype while giving all the DarkKnightmon Digimon Blocker for only three memory, when most Tamers with searching effects are usually four memory.

Combined with DarkKnightmon's effect of splitting into two Digimon on deletion, Nene is a must-have for any defensive DarkKnightmon deck. 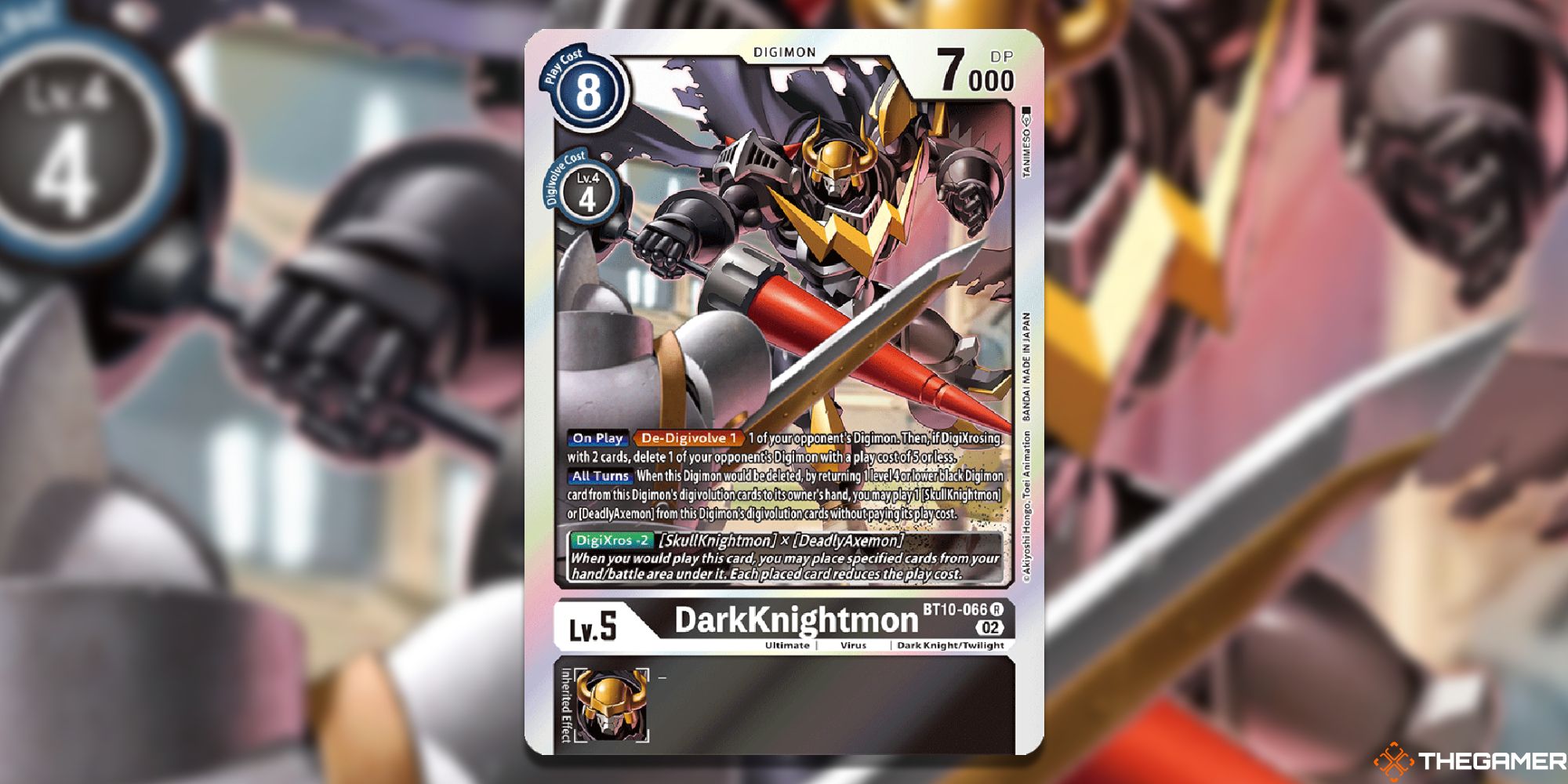 When releasing a card with the same name as the old one, there may be a chance of accidentally power-creeping the older version of the card, but Bandai performed this task perfectly.

The BT10 DarkKnightmon can DigiXros with two Digimon to reduce its cost by four, solving one of the biggest problems of the deck, while simultaneously keeping the old BT7 DarkKnightmon playable, and almost mandatory to play since it can be recyclable in many ways throughout the deck. Smart card design at its finest. 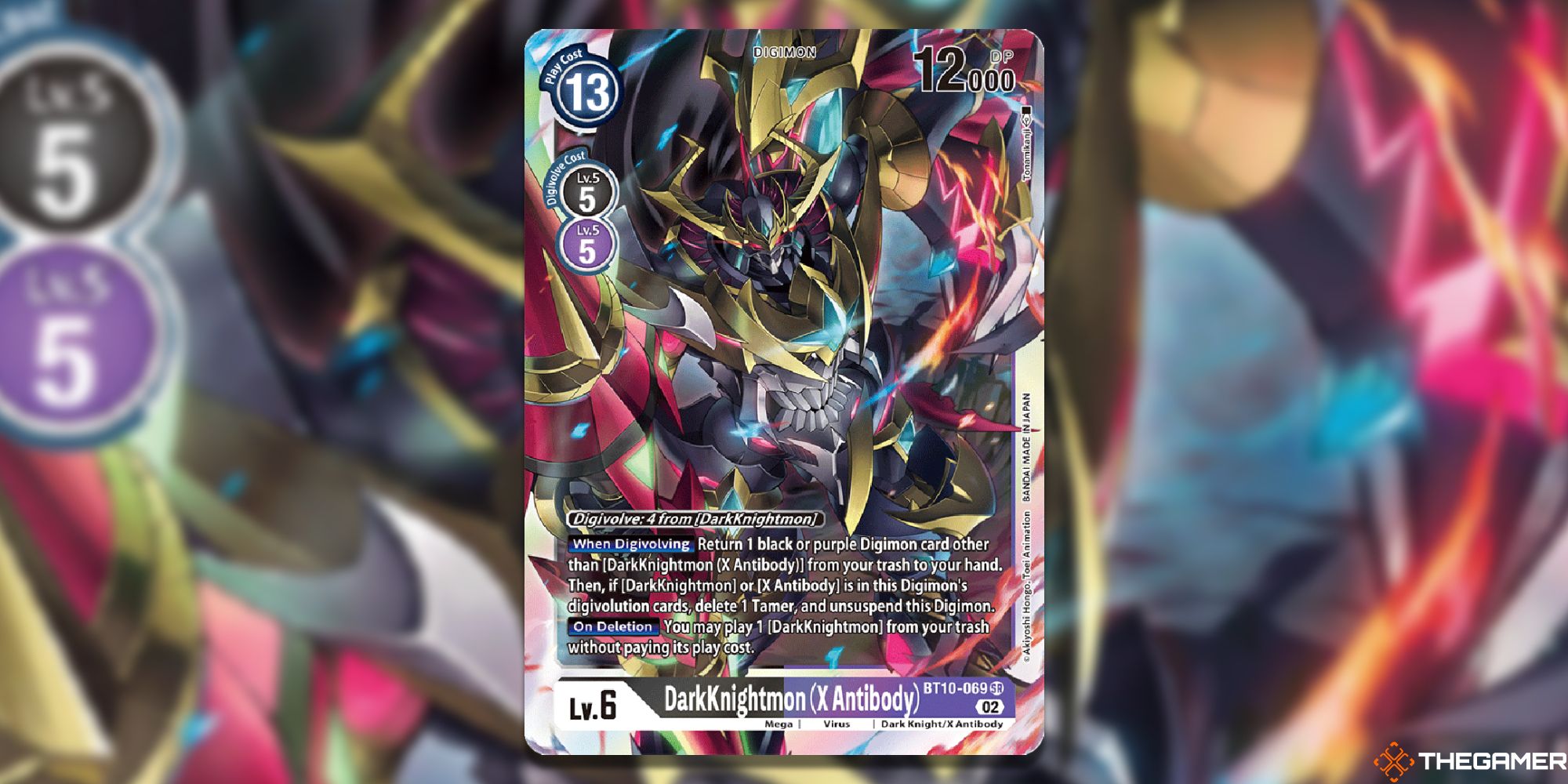 The DarkKnightmon deck is one of those decks that don't necessarily need a level six Digimon as a top end. It is perfectly fine using DarkKnightmon as its boss Digimon. DarkKnightmon (X Antibody) is just more utility for the deck. This card returns a card from the trash.