Survivors in Dead by Daylight can choose four different perks per match, each of which gives them a special ability they can use to escape the game’s brutal killers. The ability to customize your perks is one of the things that makes Dead by Daylight’s gameplay so engaging. In addition to the cast of 30 survivors, the ability to choose a selection of four perks means there are endless possibilities for how to customize your playstyle.

While you can choose almost any combination of perks, the one exception for survivors is Exhaustion perks. Some of the most powerful perks in the game, they all share a single cooldown (represented by the “Exhausted” status). It is pointless to bring more than one, since using one will put any others on a lengthy cooldown. Because you can only bring one Exhaustion perk per game, it is important for Survivors to think carefully about which one they are going to bring. Here are all eight, ranked in order of usefulness. 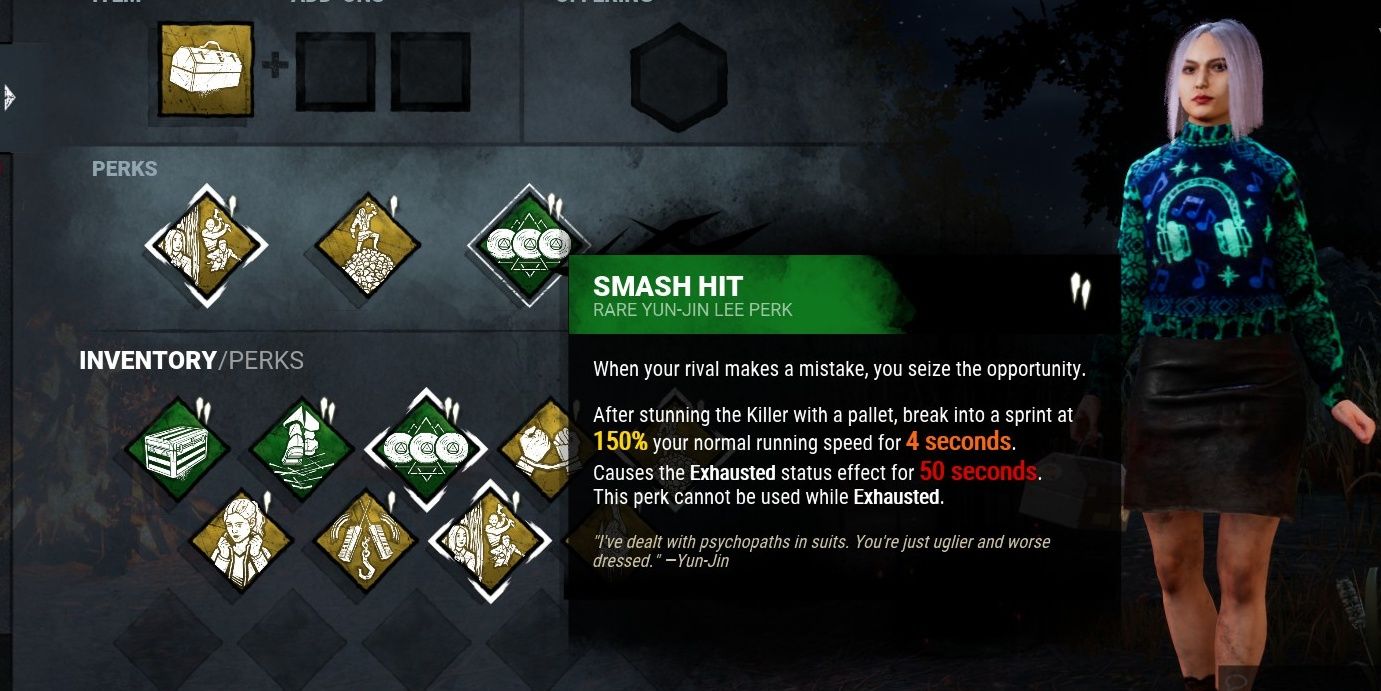 One of Yun-Jin Lee’s perks, Smash Hit, has the highest payoff. While some Exhaustion perks give speed boosts of two or three seconds, Smash Hit gives a full four seconds, which is a lot of time in Dead By Daylight.

However, it still ranks last because it is so hard to activate. For Smash Hit to work, you first have to stun the killer with a pallet. Pulling off a successful pallet stun already gives you a major advantage, so having an extra second of speed compared to Sprint Burst or Lithe is redundant. Furthermore, skilled killers know how to avoid pallet stuns, meaning you’ll have fewer chances to use this perk compared to the others, which are easier to activate. 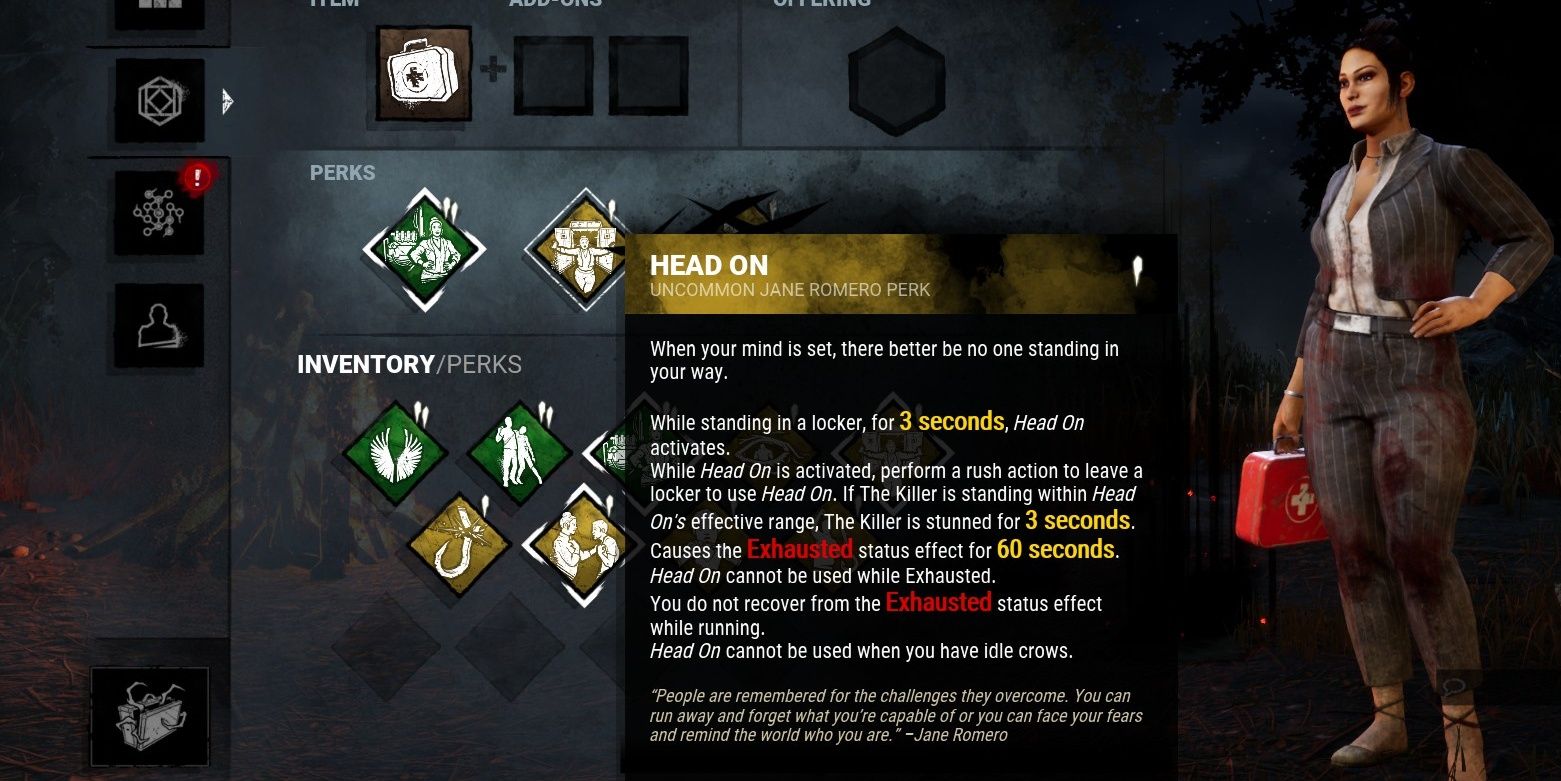 One of Jane Romero’s perks, Head On is a creative perk that allows you to turn the lockers scattered across the map into weapons. If you hide in a locker for three seconds, you can then jump out of it to stun the killer when they’re in front of it.

On the rare chance that you pull it off, a Head On stun can be very satisfying, and it can even allow you to save a struggling survivor from the killer’s grasp. However, the chances of the killer walking in front of a locker that you have been inside for three seconds are low, and it is very hard to coordinate a stun. Furthermore, once the killer knows you have Head On, they will make a conscious effort to avoid lockers. Overall, Head On is fun, but way too situational to compete with the better Exhaustion perks. 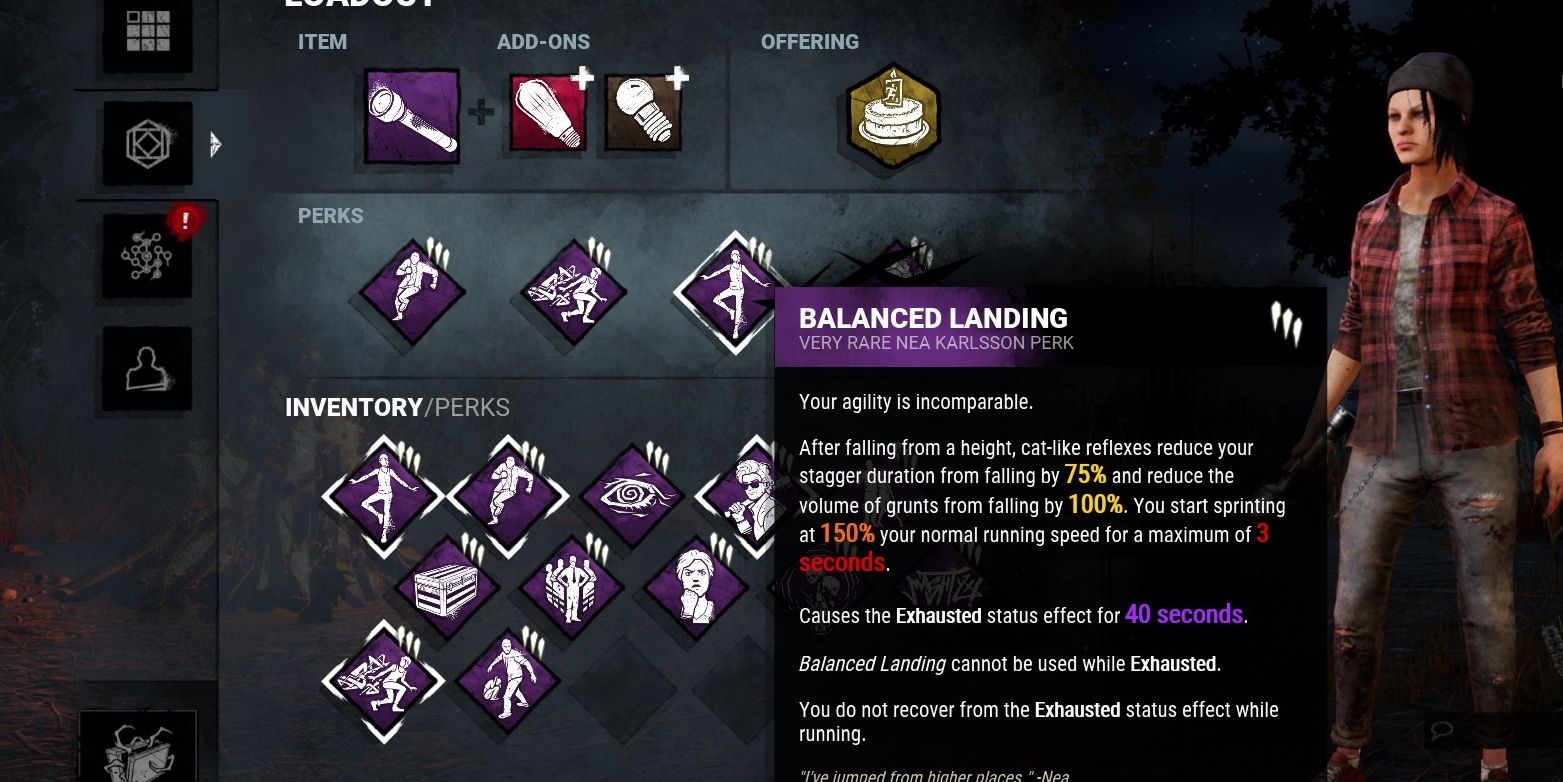 Nea Karlsson has one of Dead By Daylight’s most iconic perks, with her Urban Evasion being a fan favorite. Her other perks, Balanced Landing and Streetwise, are slightly less popular. Balanced Landing gives you a speed boost after you fall from a great height, and it also reduces the amount that you stagger and grunt when you hit the ground.

Jonah Vasquez’s Overcome gives you a speed boost for two seconds after you are hit by the killer. Unlike Balanced Landing, Head On, or Smash Hit, this perk does not require any unique environmental factors to activate: it is guaranteed to give you some level of value as long as the killer hits you with at least one attack. While you can go an entire game and never have a chance to use your Balanced Landing, chances are if you bring Overcome you will use it at least once or twice.

On the downside, Overcome’s guaranteed activation also comes at the cost of one second of speed. While the other sprint-based exhaustion perks give a three or four second boost, Overcome only gives you two. It is also useless if you are Exposed (a status effect that allows the Killer to down you in one hit), and against single-hit attacks like the Hillbilly’s Chainsaw. 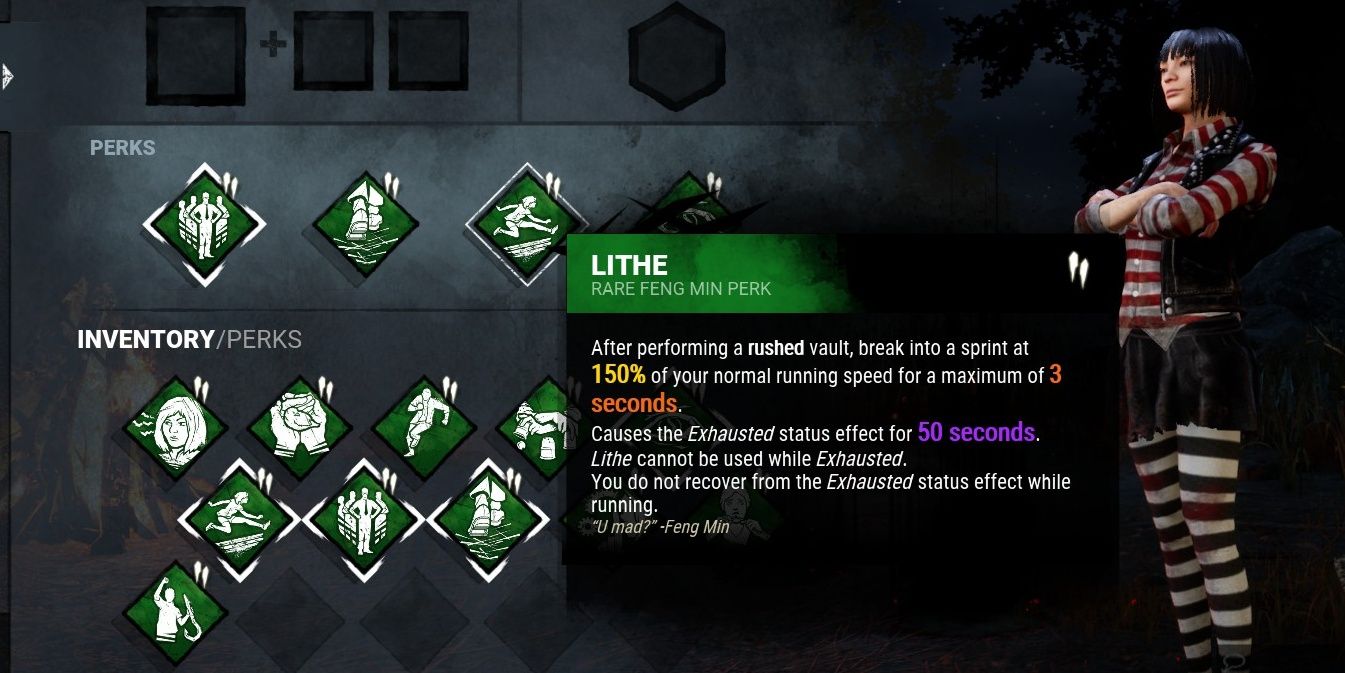 One of Feng Min’s perks, Lithe is by far the easiest exhaustion perk to use. Rather than jumping from great heights or pulling off pallet stuns, all someone has to do to use Lithe is vault a window or pallet. Because you’ll likely be doing a lot of vaulting in chases, you are almost guaranteed to get value out of Lithe.

Furthermore, unlike Overcome, Lithe has a full three-second burst of speed. Overall, it’s really hard to go wrong with Lithe as your Exhaustion perk of choice. 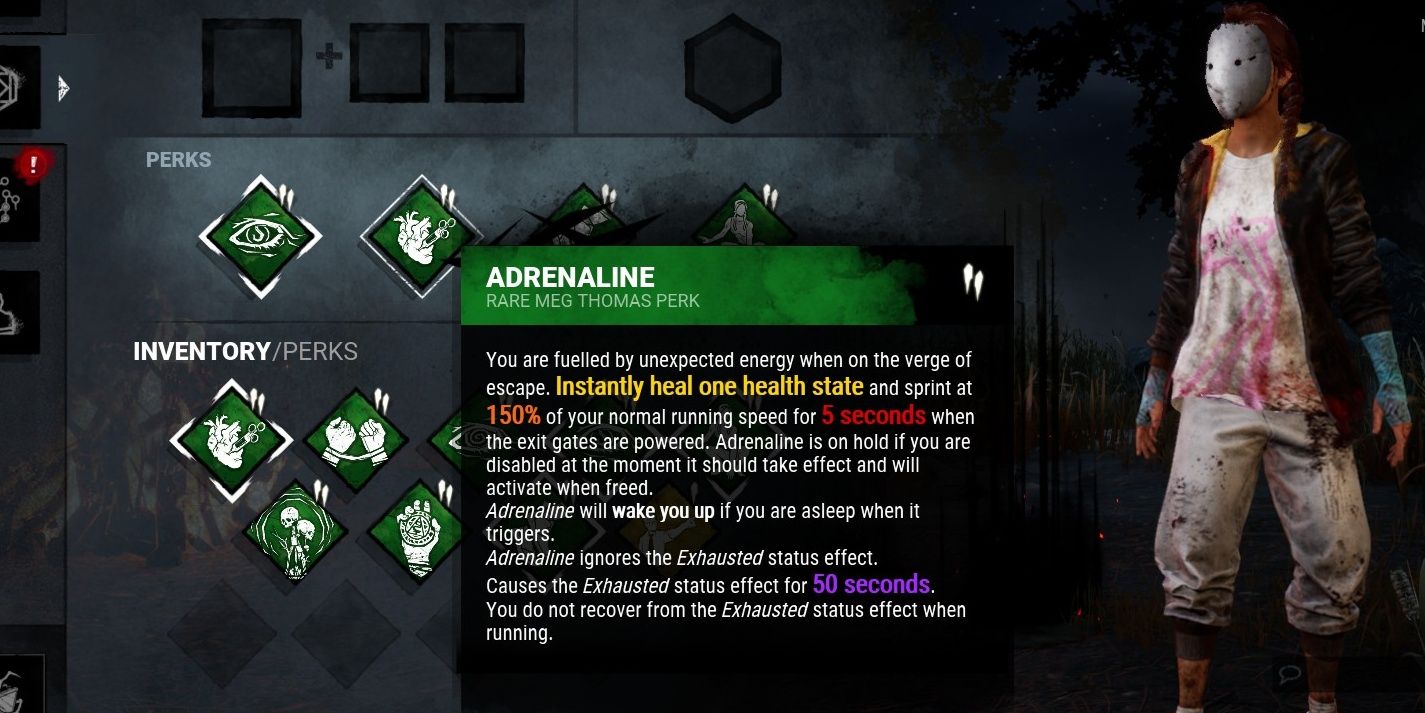 Adrenaline can be a game-changer: once the exit gates are powered, you instantly heal one full health state and gain a five-second sprint. This can completely turn the game around: it immediately revives you if you are knocked down, and it gives you the speed you need to get to an exit gate and escape on time. If survival seems hopeless in the late game, Adrenaline can get you out alive.

Sprint Burst is a mixed bag: it is probably the hardest exhaustion perk to use right, but one of the strongest if you know how to use it. Sprint Burst gives you the same speed boost as Lithe or Balanced Landing, but it doesn’t require any special circumstance to activate: all you need to do is start running, and it kicks in immediately. Unfortunately, this also means that there is no way to run without it automatically activating, thus putting it on cooldown every time you run somewhere.

Newer Survivors fall into two patterns with Sprint Burst. Some will waste it by running at the wrong time, only to have it stuck on cooldown when they need it. Others are so scared to waste it that they waste time instead by walking slowly all over the entire map so it doesn’t activate until they want it to. It takes a skilled survivor to learn the balance between saving and using their Sprint Burst: however, once someone develops this skill, it becomes a powerful force.

David King’s Dead Hard wins out because of the unique strategic opportunities that it gives you. It offers a brief moment of invincibility and a short lunge forward. The invincibility can save you from an attack that would have otherwise killed you, or allow you to take a protection hit and save another survivor. The lunge can create the distance you need to get to a new loop or pallet.

It is the only perk on this list that can be activated at will – you choose exactly when you want to use your Dead Hard, and you can use it in any situation, as long as you are injured. Dead Hard has saved many lives, and infuriated many killers, and it should be no surprise to experienced players that it is number one on this list.