Home » News » Darkest Dungeon: How To Beat The Shrieker

Darkest Dungeon: How To Beat The Shrieker

When it comes to bosses in Darkest Dungeon, you’ll have to track down most of them in various areas of the Darkest Estate. However, there are a few that will track you down instead, and the Shrieker is one of these special event bosses.

The Shrieker event happens in the Weald and there are three ways in which it can spawn, all of which are covered below, as well as our recommended strategy on how to complete this fight and which heroes you should bring along with you.

How To Unlock The Shrieker Boss Battle 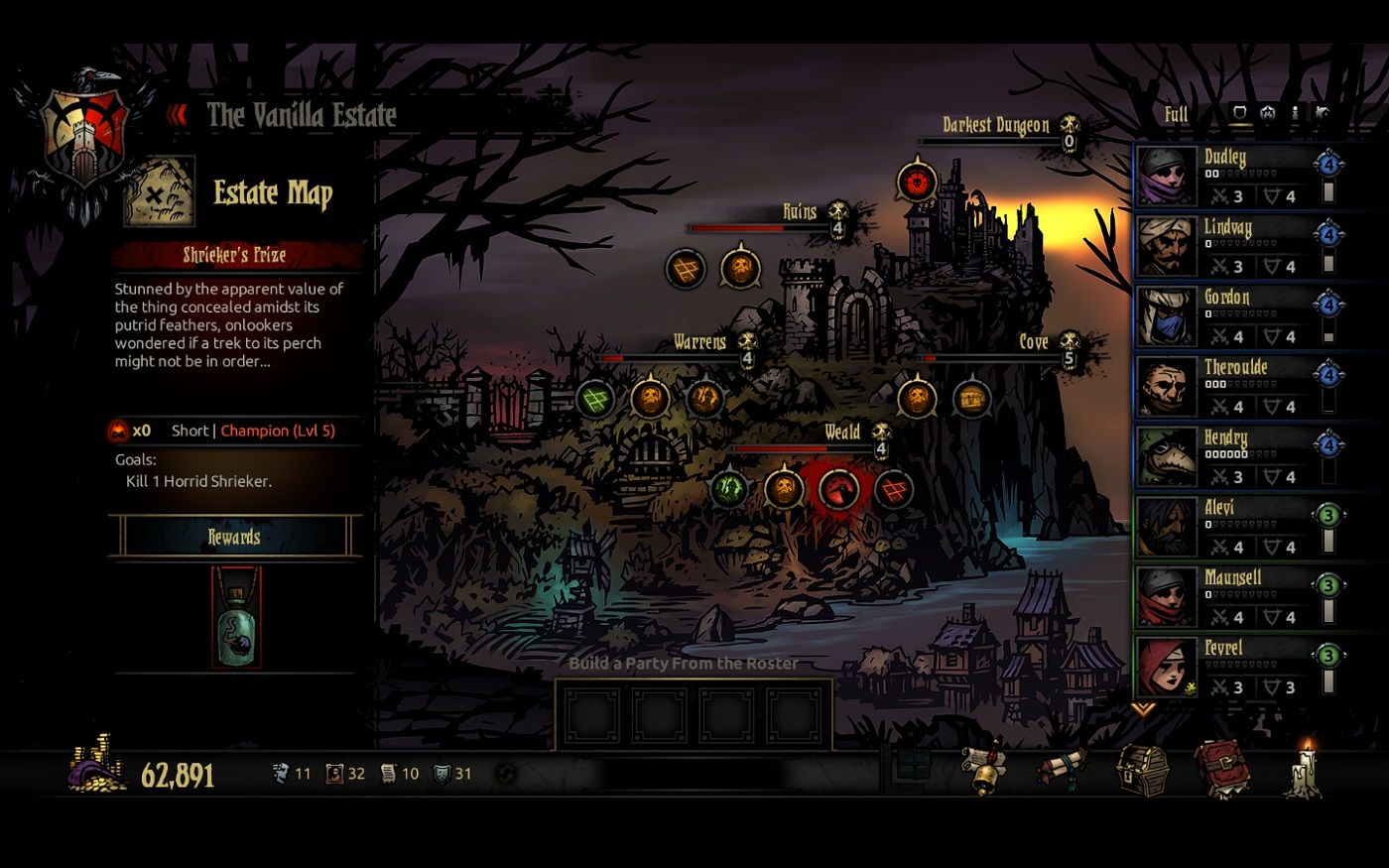 The Shrieker is a special boss that will occur when one of the following events/requirements are met: 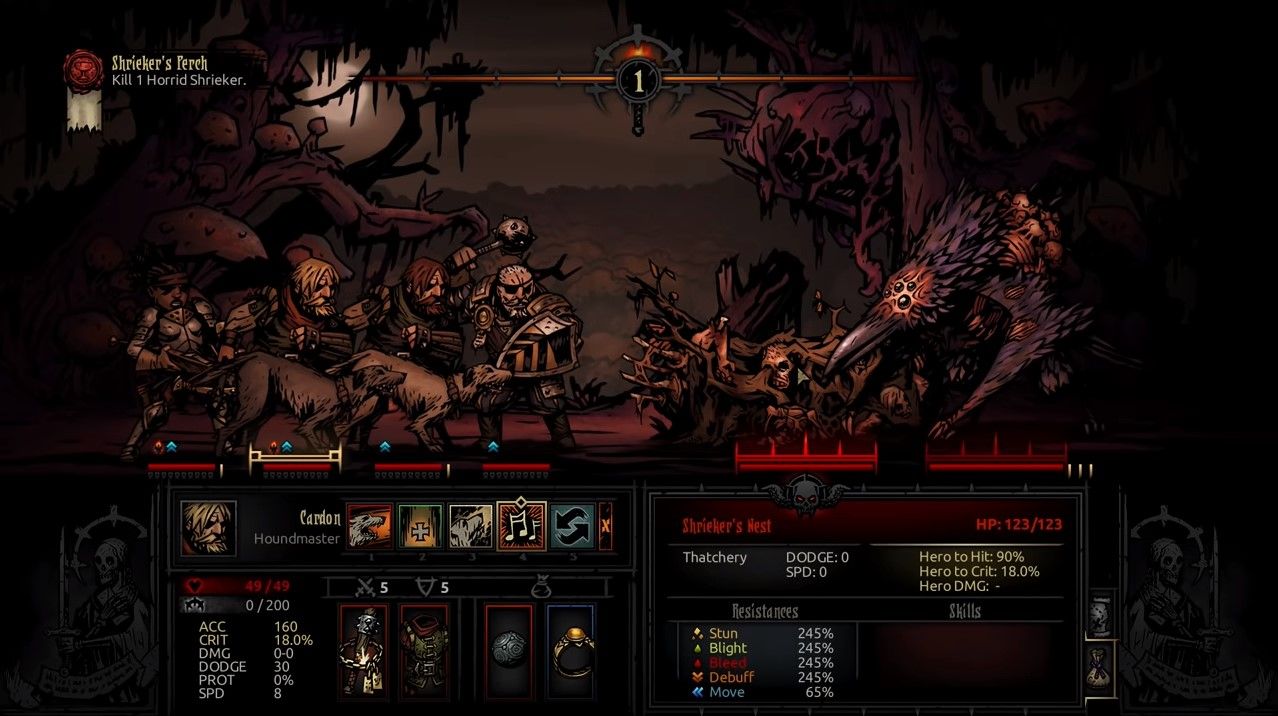 Make sure all of your party members are well-equipped. The only items you need to worry about are bandages, herbs, and holy water, as you won’t have to navigate a lengthy dungeon.

The important thing to note with this battle is that it will only last for four turns, after which the Shrieker will use Shrieking Flight to fly away and the battle will end. However, this still counts as “defeating” the Shrieker.

The Shrieker takes up two positions, while its nest takes up the other two slots. It will periodically change where it is during the battle, so be prepared with heroes who can attack various positions.

You will likely have to decide what you want to do for this battle — either destroy the nest or defeat the Shrieker. Defeating the Shrieker will give you a better chance of earning a positive Corvid quirk for your heroes, whereas destroying the nest will earn you a lot more loot (and it’s easier to achieve). It’s not impossible to destroy both in one fight, but it’s particularly hard due to the time limitation. We cover both options just below.

(Alternatively, if you’re not fussed with either target, you can simply survive to complete the event and still reclaim your trinkets in the process.)

The Shrieker is an Eldritch/Beast boss and it attacks three times per turn. It is susceptible to Bleed but is resistant to Blight. The Shrieker has a variety of attacks; most are low damage but can inflict Blight, Debuff your party, or increase Stress. The most dangerous attack is Peck, which has higher damage and inflicts Bleed. 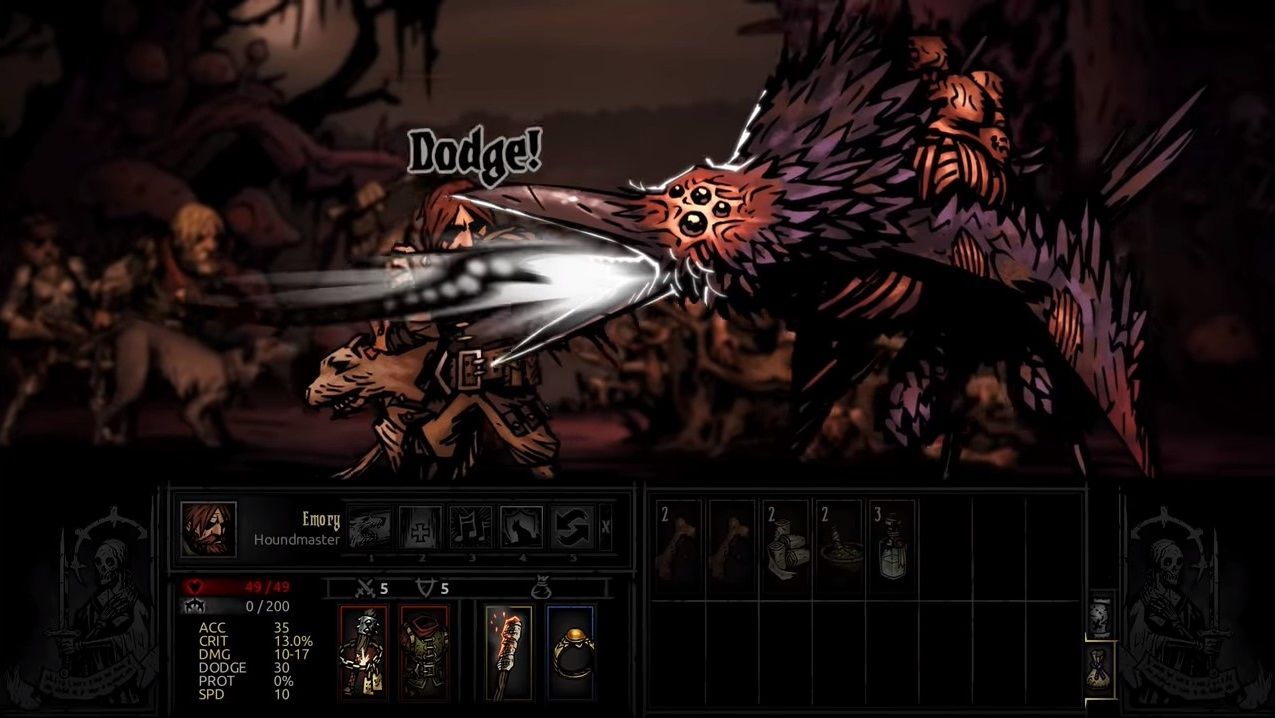 When it comes to your party setup, we recommend using the following heroes if you’re targeting the Shrieker:

You need to really focus on your damage when toppling the Shrieker as you only have four turns to defeat it. As a result, don’t bother bringing a healer — just ensure you have items to heal up your heroes as and when needed.

The Shrieker has a high chance of dodging your attacks, so we recommend using either the Jester or Man At Arms to increase your party’s accuracy.

The Houndmaster is a great option for this battle as it can land Bleed/Mark on the Shrieker and you can use Dog Treats to improve his accuracy and damage output. The Occultist can also Mark/inflict Bleed and has a damage bonus against Eldritch enemies, but ultimately the Houndmaster has an edge because of his Dog Treats.

Heroes such as the Hellion and Leper offer great DPS to help pound on the Shrieker, but only providing that you improve their accuracy with a buff. Someone like the Highwayman is also a worthy inclusion; as the Shrieker attacks so often, it will trigger the Highwayman’s Riposte.

When it comes to your party setup, we recommend using the following heroes if you’re targeting the nest:

The nest is easier to destroy, but you will have the Shrieker bothering you in the meantime. You might want to bring a healer with you just in case, but if you want to forgo the healer and rely on items, add another worthwhile DPS to your party.

Bring a hero that is capable of marking the nest, then focus on your DPS — heroes who have skills with a damage bonus on marked enemies are a good idea, such as the Arbalest. The nest is immune to DoTs/Debuffs.

Note: If you do want to attempt to take down both the nest and the Shrieker, we recommend using the first recommended party setup to maximize your damage output.