Cyberpunk 2077: The 10 Best Skills To Get In Engineering

If you’ve joined a forum about how powerful certain weapons are in Cyberpunk 2077, then you’ve seen the disrespect levied upon tech weapons. Though there are some awesome iconic tech weapons, none of them reign supreme in any category (i.e. the best sniper rifle is a power weapon, the best pistol is a smart weapon, etc). Naturally, with a tree that seems to encourage tech weapons, you might be inclined to resist investing any points here.

But don’t be too hasty! Not all of these skills are designed to prop up tech weapons. In fact, many of these skills boost grenades, which everyone from hackers to snipers will want to use on high-threat bosses and large mobs. If you spend your points wisely, you’ll find that engineering has many of the skills that will help make you the ruler of Night City. 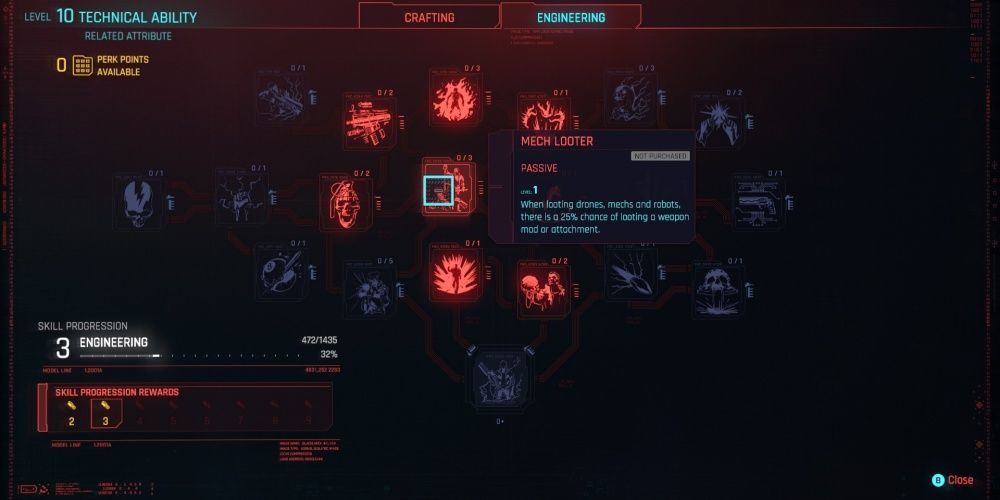 Look, eddies are scarce in Night City. The game does not have nearly enough, even if you try to complete every side gig and sell every piece of loot. To make it worse, mods and attachments are hard to come by and you’ll usually have to pony up for them. This skill takes care of both problems. You’ll have plenty of mods to choose from by gaining at least one in almost every encounter. And what you don’t need, you can pawn off. 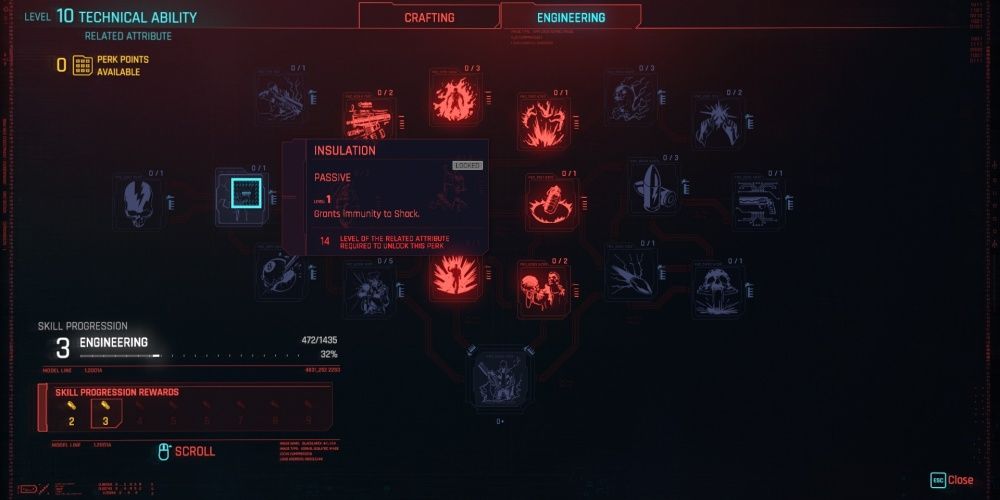 Shock is a surprisingly common effect in the game. Enemies like to send in netrunners and melee units with electrified batons to try and take V down. That doesn’t include the guns that often have a chance to shock you, even common guns are capable of applying shock effects. Eliminating this damage entirely for only a single skill point is as much value as you’ll ever get. 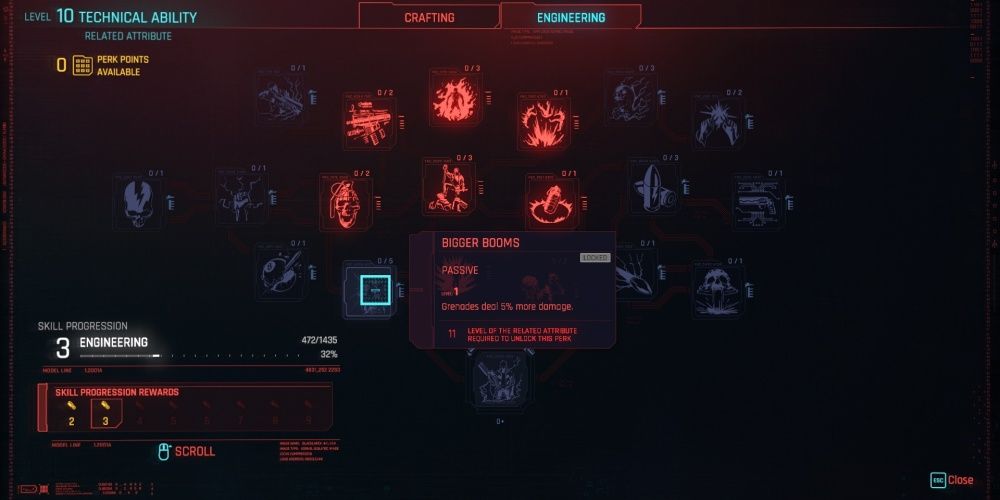 You might wonder how the game can justify five points for a 25% damage increase. Sure, you can spend two skill points and increase your damage with pistols by 50% or more. So why is this limited to 5% increments? Because grenades do so much damage already. An extra 25% is overkill on a mob, but against a cyberpsycho it can almost one-hit kill them. It takes the damage from good, to giant-killer. 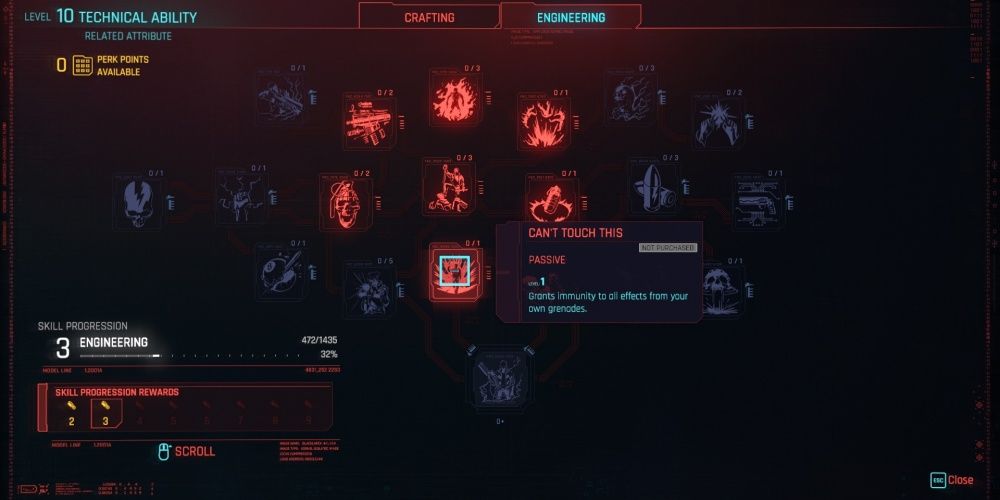 When you’re surrounded by melee enemies, what do you do? Try to stave them off one-by-one with a baseball bat? Try to use an SMG with your sights bouncing all over? You’ll wish you had a flamethrower, but there’s none to be found. There are truly no great choices unless you’ve got this skill. Then you’re just a simple pin pull away from getting rid of all of your problems. It’s also great against bosses that don’t go down easily. 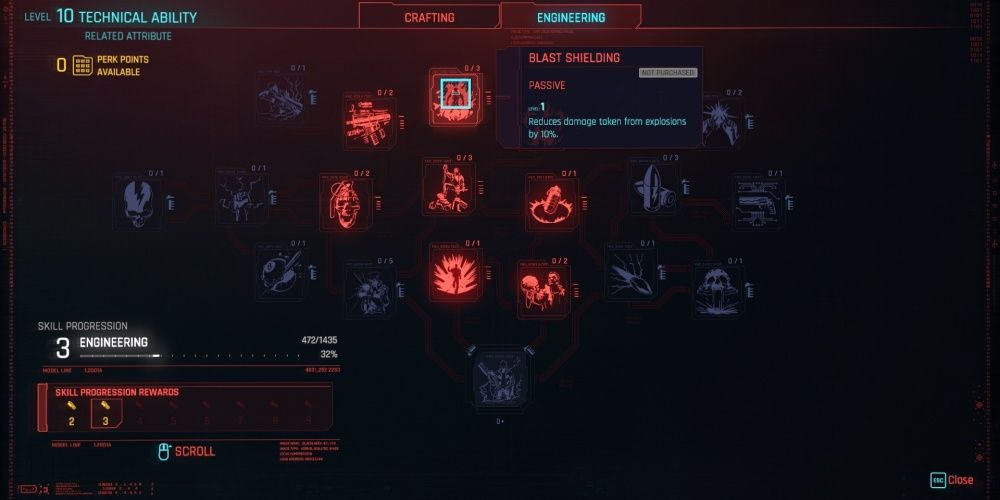 So now that you’re immune from your own grenades, now it’s time to cut down on grenades everywhere. Now if you’re playing on an easier setting, then you might not think that grenades are a big deal, but this covers all explosions, including explosive damage that comes from guns and blasts that occur from barrels and rockets. It’s a nearly mandatory skill on harder difficulties. 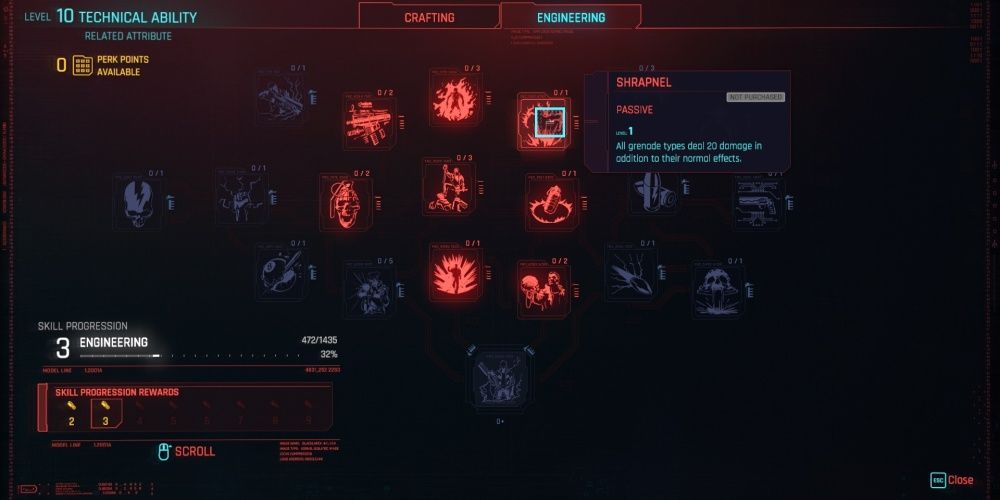 If you’re going to be boosting the percentage of damage from grenades, then it naturally helps to increase the base damage as well. Best of all, this damage is untyped, so whether you’re battling against machines that are immune to poison or bosses immune to shock effects, this damage will cut through all of that and do some nice, raw damage that can’t be negated. 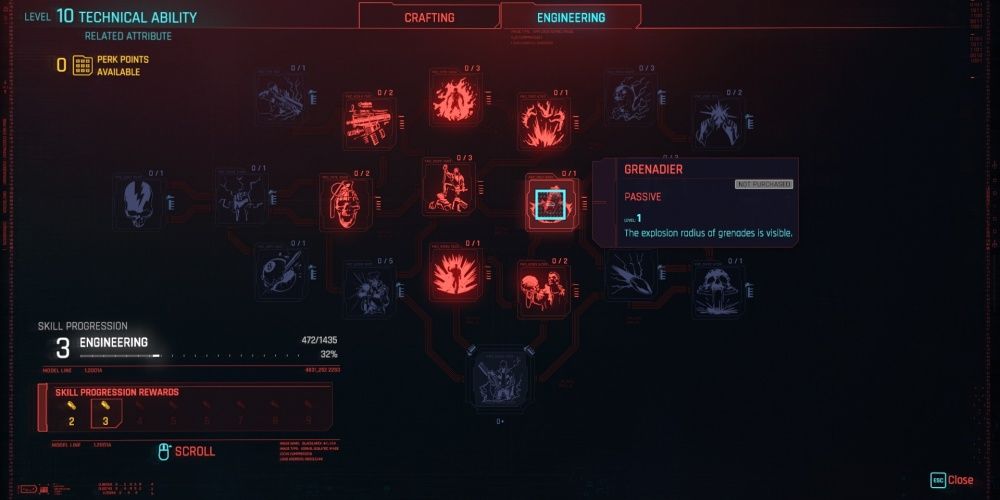 Even if you’ve got a rig that can play Cyberpunk 2077 on maximum settings, grenade bursts happen so quickly that trying to keep track of all the particle effects is an impossible task. When you toss a grenade, you’ve got to know who is going to go down and who has evaded the burst so you know where your targets are. This will reveal the radius and give you a better guidance system regarding who your biggest threats will be. 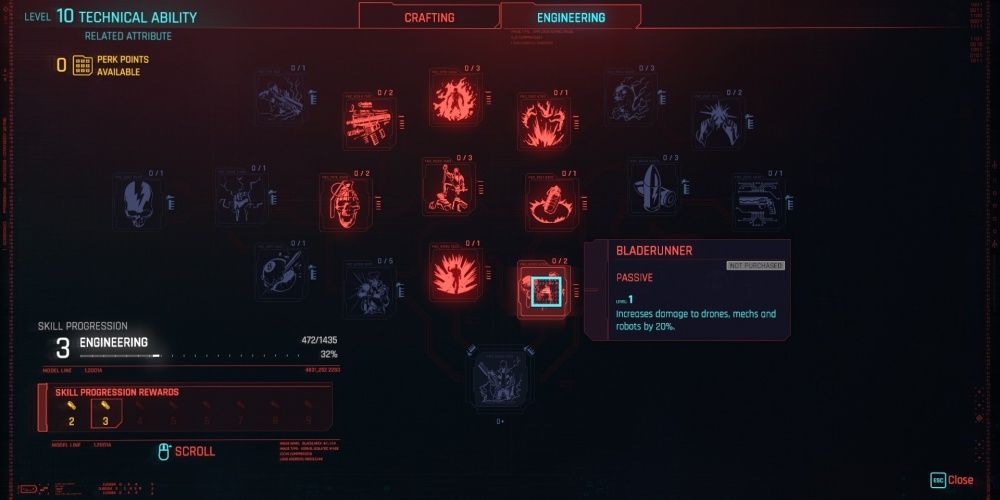 You don’t run into too many robotic enemies in Night City, but when you do, they are souped-up to be much stronger than your average goon. Some of them are high-threat targets and bosses (maybe the most notable boss fight in the game is against a mech). So grab an extra 40% damage and bring them back down to a range where you can hack them apart like any other enemy. 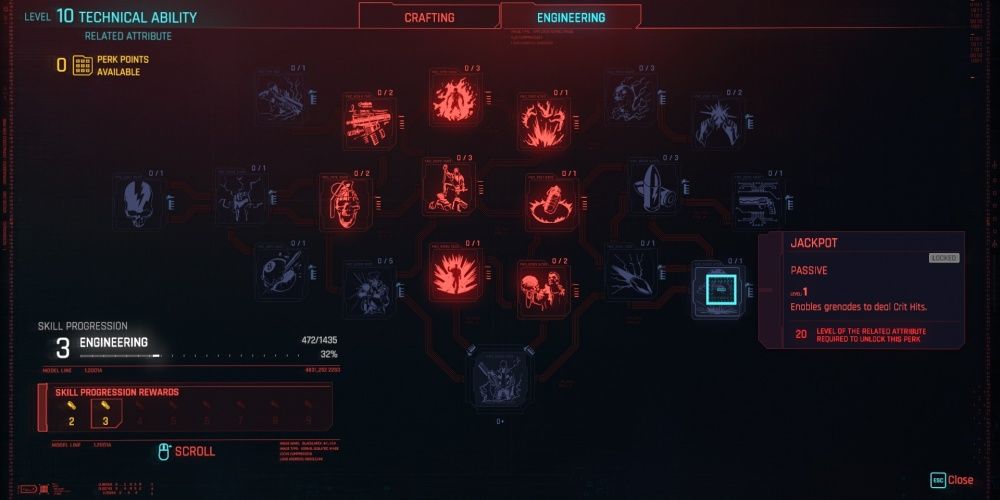 Believe it or not, on the forums, gamers have taken to calling this grenade-heavy build the jackpot build in homage to this signature trait. A critical hit with an assault rifle is hard to distinguish from any other bullet. A critical hit with a sniper rifle is pretty deadly. But a critical hit with a grenade ends the toughest opponents in the game. It’s absolutely absurd and if you chuck two or three at a target, you can be sure that this will end things before they’ve had a chance to unholster their sidearms. 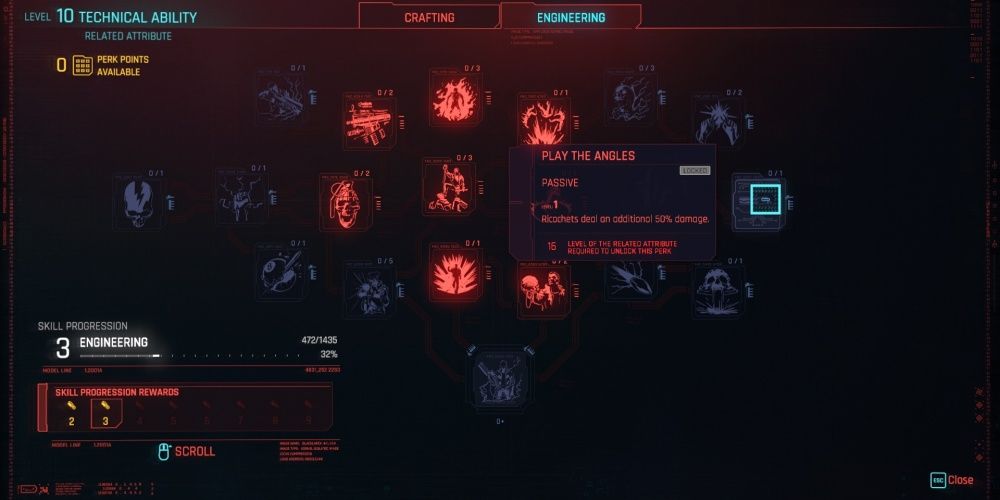 Power weapons are awesome and if you’re going to be spraying bullets, it helps that most of the shots will hit their mark, either by hitting the target or on the ricochet. The ricochet deals reduced damage, until you get this skill and then, suddenly, it stops mattering whether your shots hit or miss since they all deal about the same damage anyhow.

NEXT: 10 Lingering Questions We Have At The End Of Cyberpunk 2077 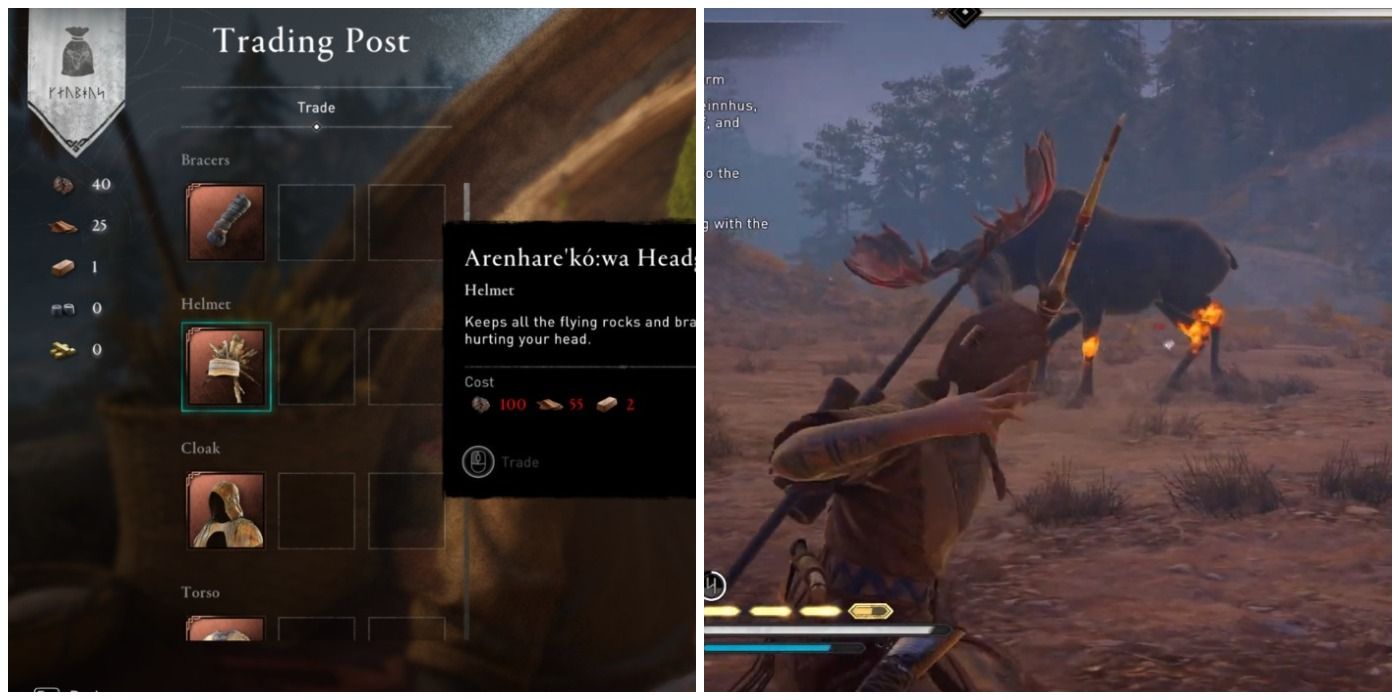 Hodey Johns is a writer for Game Rant based out of the Rocky Mountains in North Ogden, Utah. He’s had a passion for video games and literature since he was a child growing up along the beach in San Diego, California. As a graduate of Theology from Liberty University, he puts his experience with religion, philosophy, and debate into his work. His other interests include sports, bike riding, and good old-fashioned barbecue.

Related posts:
Best News
Xbox Confirms 9 More Titles Coming To Game Pass Before The End Of The Month
Nioh 2 Director Says Video Game Difficulty Is Like Spicy Food
Persona 5’s Confidants Are Some Of The Best Characters In Games
Hitman 3 review — A world made entirely out of Chekhov’s guns
The Baby Yoda Back Bling in Fortnite is broken, and players want it fixed
Recent Posts
This website uses cookies to improve your user experience and to provide you with advertisements that are relevant to your interests. By continuing to browse the site you are agreeing to our use of cookies.Ok