The orange bandicoot is back, and Crash 4: It’s About Time is the true sequel to the original trilogy fans have been clamoring for since the PS1 days. Everything that made the originals great is back, most notably the tons of collectibles, secrets, and challenges scattered throughout the stages. Of all the secrets, the four colored gems are the ones you’ll want to go out of your way for first if you’re a hardcore fan, and not just because they unlock trophies and achievements. Here are the locations and rewards for all of the Crash 4 gems.

There are four colored gems to find in Crash 4, red, green, blue, and yellow. They are each hidden in their own stages, and will open up their own individual hidden levels. Plus, once you have collected all four, one final door can be unlocked for a final reward. Make sure you always finish the stage after collecting the gem to make sure it counts as collected. 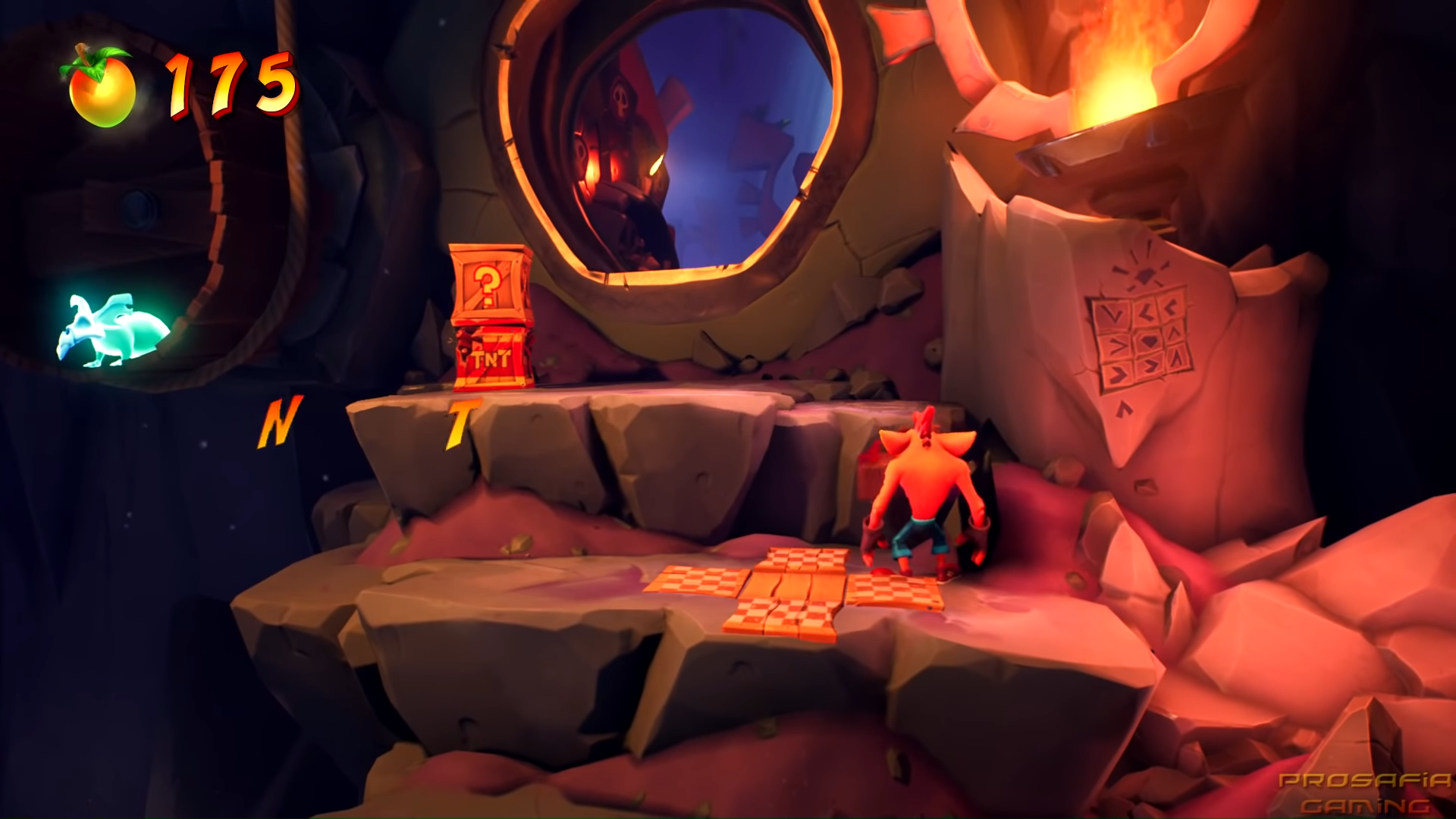 The red gem can be found in the level N. Sanity Peak, the second level of the N. Sanity Island dimension. Go through the stage as normal until you come to the second door that a ghost rat running on a wheel opens. Check out the nearby wall to the right of the door to see a carving scratched into the stone. This is the path you’ll need to take on the following platforms, which is to go in a counter-clockwise circle starting from the bottom left platform. Once you’ve gone all the way around, jump to the center and the red gem will appear at the top of the area. 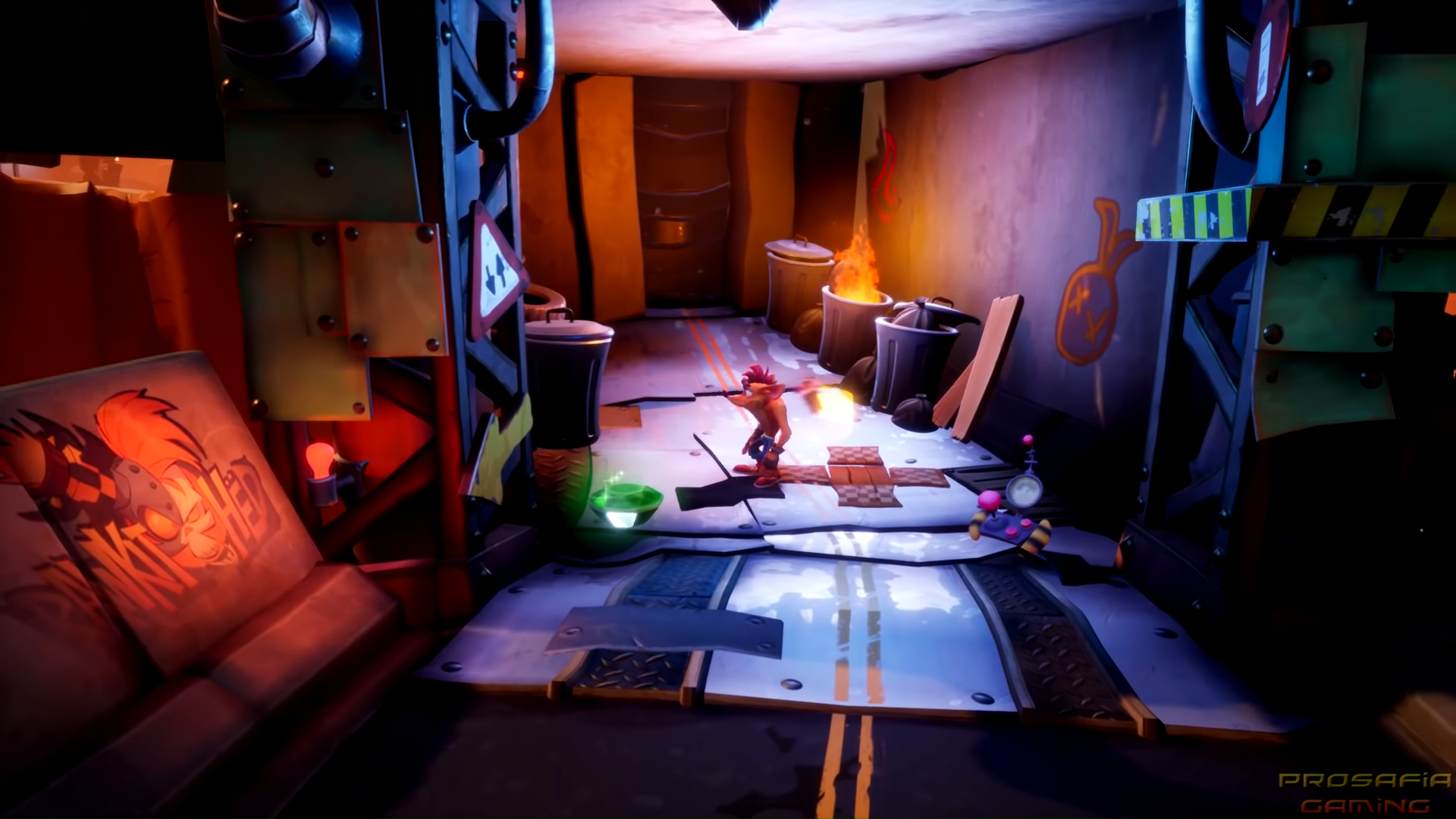 For our next gem, head over to Hit The Road in The Hazardous Wastes dimension. Make your way as normal nearly to the end of the level when the huge fire-breathing truck is chasing you. When  you make it to the checkpoint, kick the trashcan on the left to knock out a weird remote control. Keep spin kicking the remote to move a little RC car into the nitro crate and explode into the green gem. Don’t question why – just pick it up and finish off the stage. 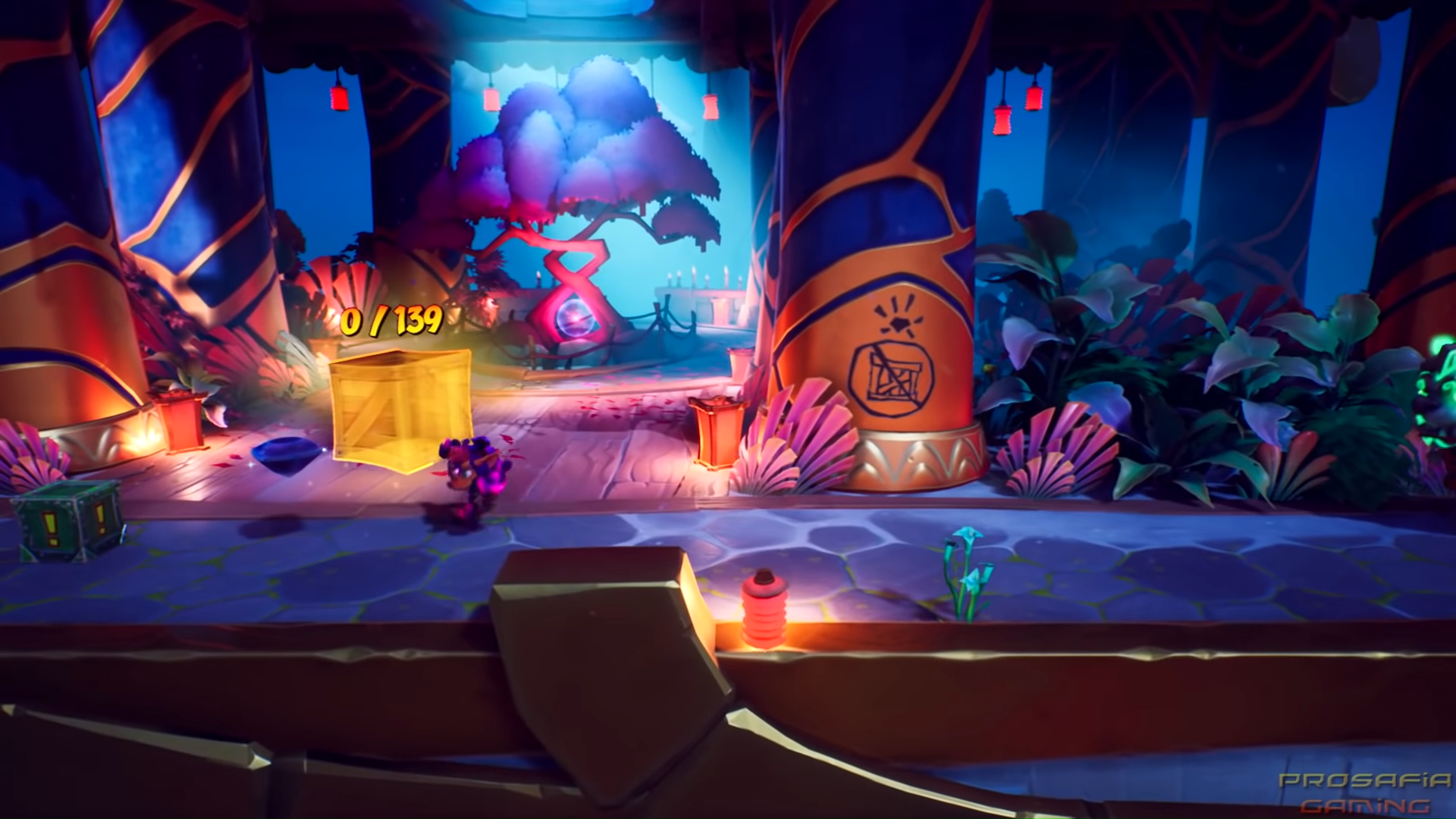 In the Tranquility Falls dimension, the blue gem will be in the Draggin’ On level. This is the most challenging gem to get by far, although it is simple enough in concept. All you need to do to get this gem is beat the entire level without destroying a single crate of any type. That means no checkpoints, TNT, regular, or any other type. You’ll need to be extra careful because this level has you use the Dark Matter mask, which will destroy any nearby crates when you use it. In those areas where you have to use it, remember to give any crate a wide berth, and take the whole stage slow and careful. The gem will be waiting for you right at the exit. 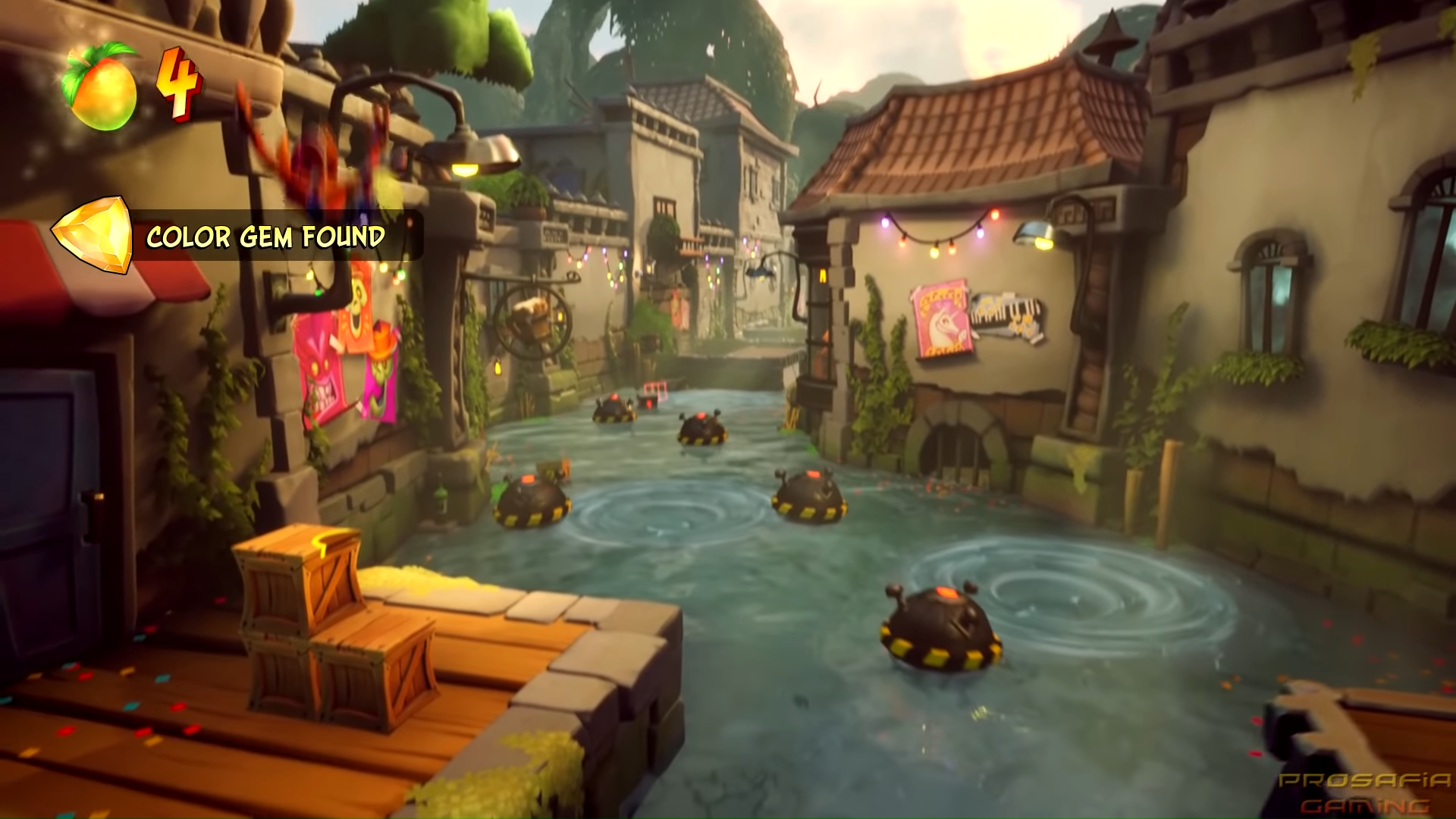 The final gem is in the Run It Bayou level within the Mosquito Marsh dimension. Almost opposite of the blue gem, this one is right at the beginning of the stage. Before you get on the jet ski, platform over to the right across some crates and onto a moving platform. Go to the left before a series of mines in the water where there’s a 2×2 stack of crates. Bounce off the top left crate and double jump in the air to snag this last gem off screen.

If you take all four colored gems to the Toxic Tunnels level on Cortex Island and reach the giant door with four gems in each corner, the door will open. Hopefully you’ve master Crash 4’s platforming by this point, because this is one of the hardest challenges the game has to offer. Whether that is a reward or a punishment is up to you. 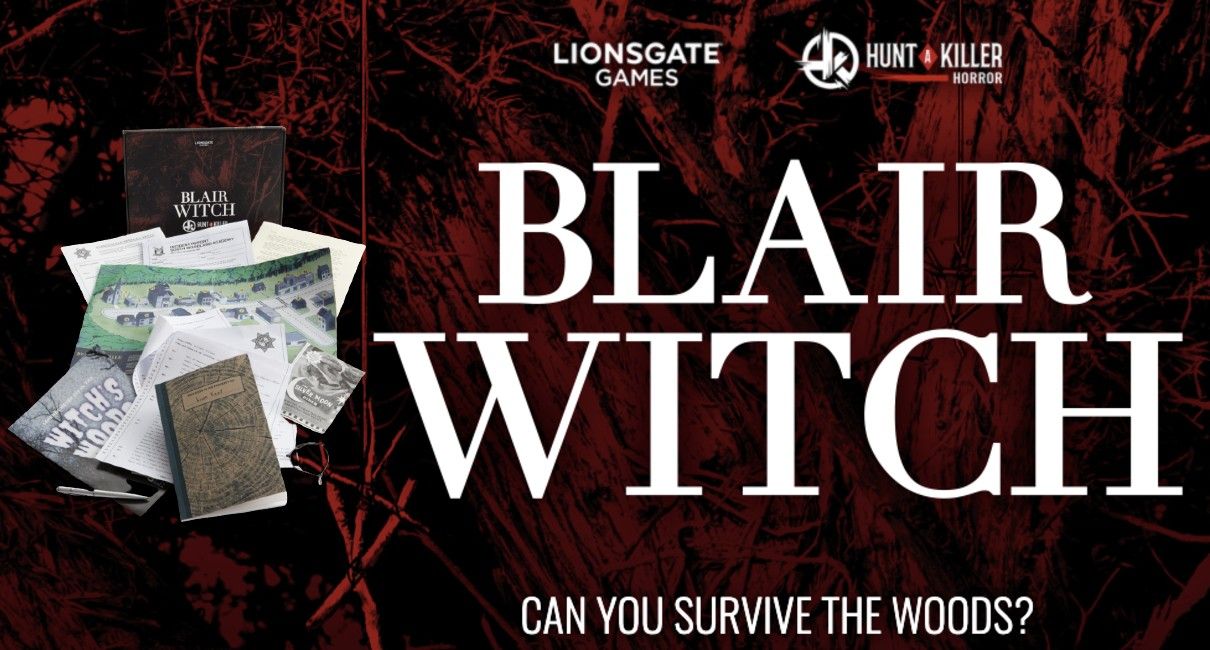