Setting up the right loadout is very important in Call of Duty Warzone.

Some people are purely into close-range fights; thus, they put their loadout together accordingly. If you are among the players that prefer to preserve their chances of hitting those long-range shots, you need a Marksman or Sniper Rifle in your loadout. Every new weapon that is introduced to the game creates a new dynamic, incentivizing the players to give it a try.

The integration of Call of Duty Black Ops Cold War’s weapons in this game has made the choice of Snipers even more difficult. In this article, we are going to take a look at your best choices for Sniper or Marksman Rifles.

The Best Sniper Rifles In Call Of Duty Warzone 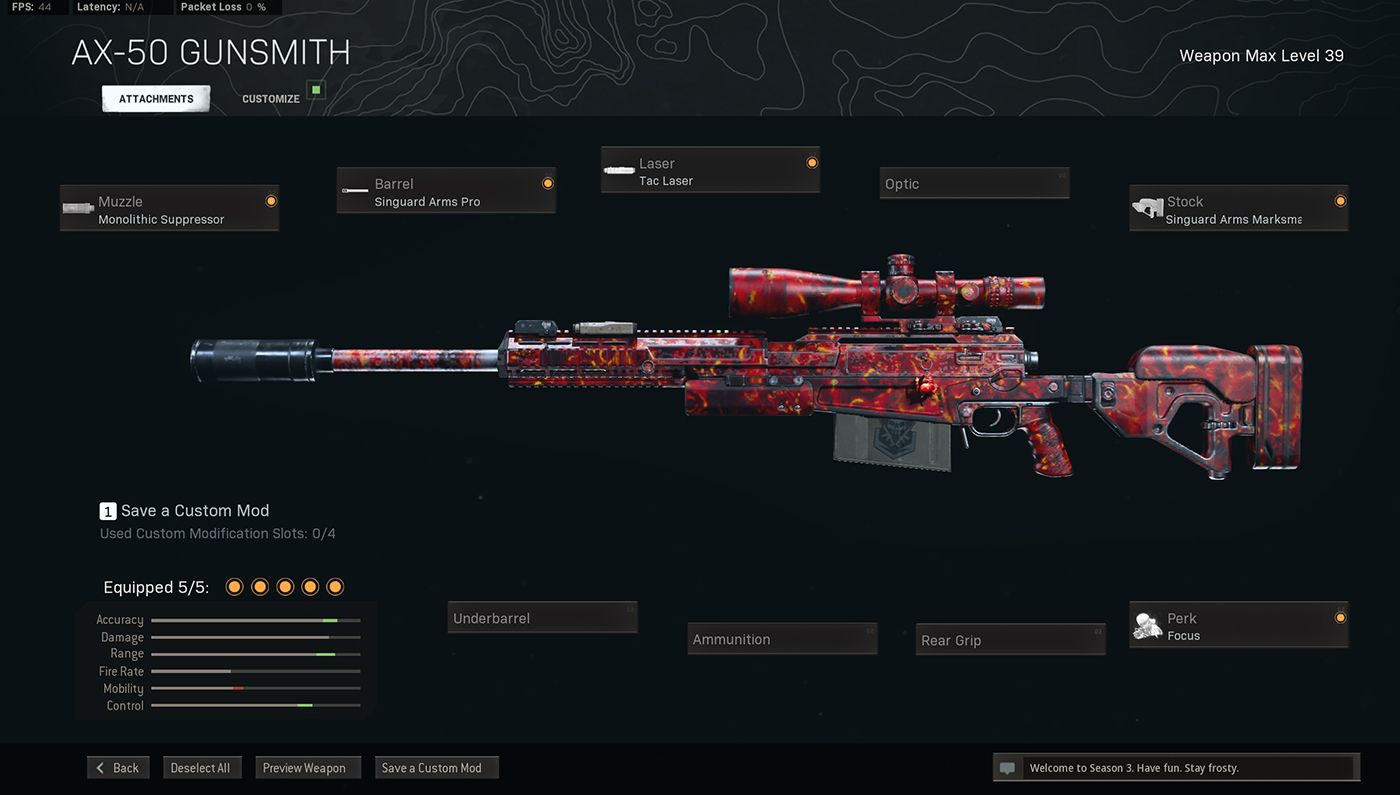 The AX50 could arguably be the best Sniper Rifle in the game. It gives you sufficient range, though not the highest, and decent mobility.

Having said that, you should know that hitting those really long-range shots requires some compensation for bullet drop. It is considerably better than the Marksman Rifles, but it’s not as good as the HDR, which we will discuss later.

Aim for the head and upper chest, and you would most probably be able to kill your enemy. 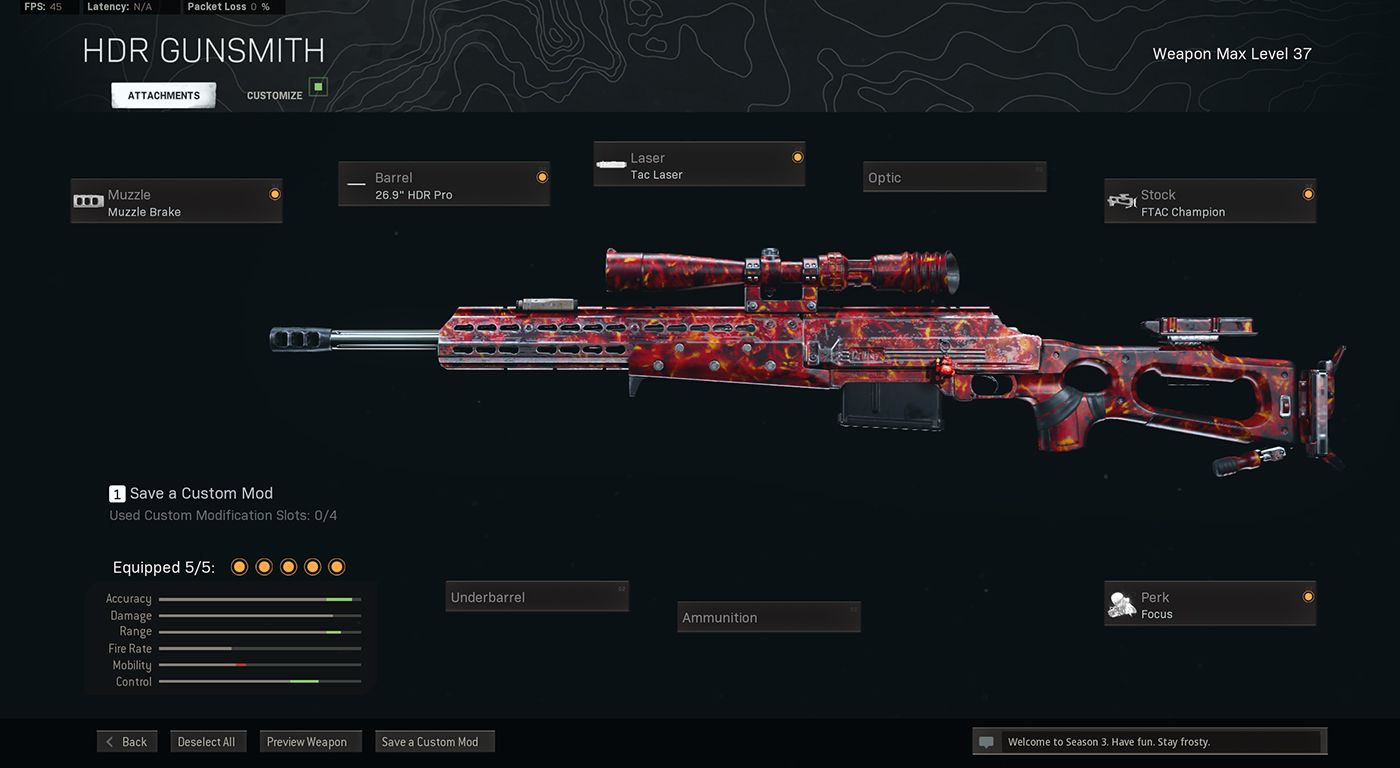 Any article about Sniper Rifles in Call of Duty Warzone would be incomplete without mentioning the HDR. The undisputed champion of range and bullet velocity, HDR has its rivals beat easily in long ranges. That, however, doesn’t come without a hefty cost.

The mobility of this gun is what puts most people off. It is so awkward and slow to handle that you are better off going with more mobile options unless you want to set up shop in a corner.

But for those of you who don’t prefer the fast pace experience of an intense Call of Duty Warzone match and rather like to pick their foes strategically from across the map, the HDR is unequivocally the best choice.

Tip: Make sure to pair it up with a short to medium range gun to have your back whenever you get pushed. 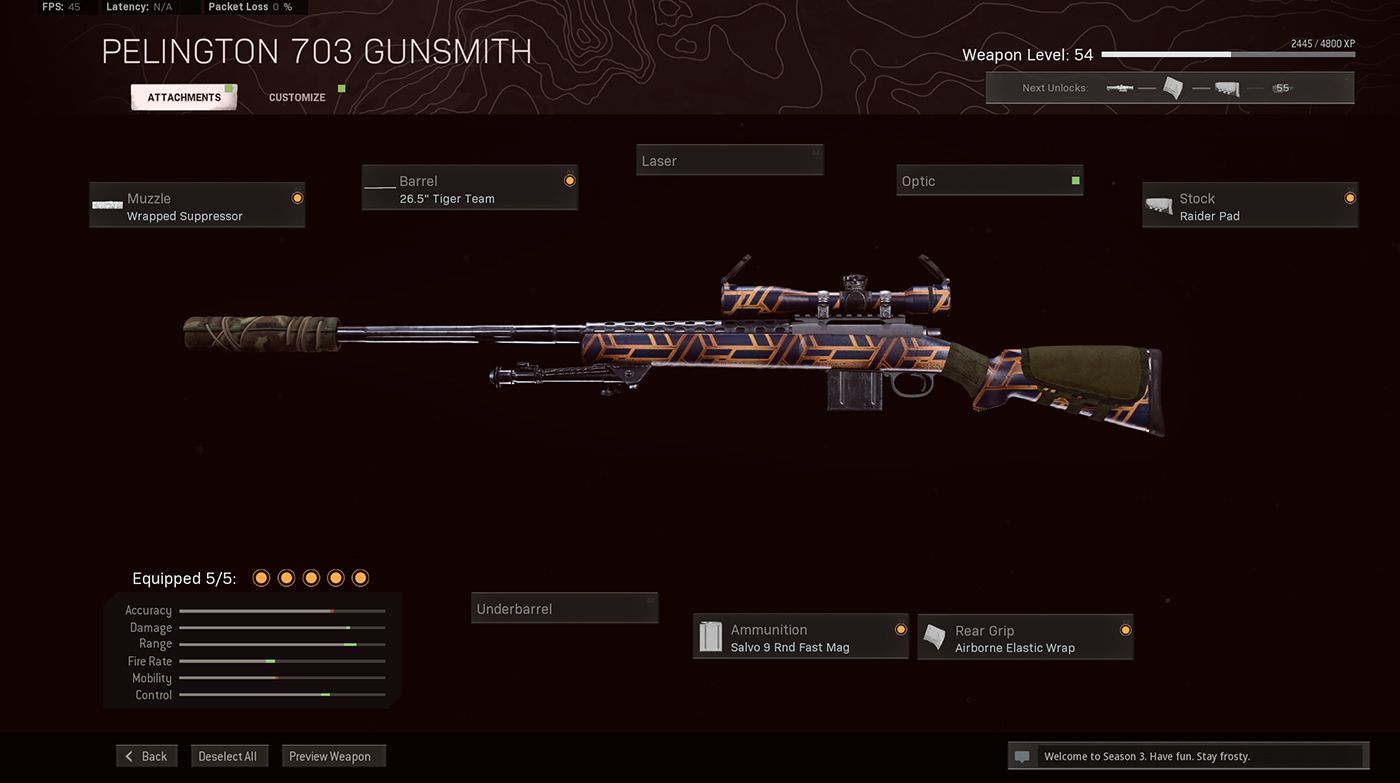 This excellent weapon from Call of Duty Black Ops Cold War has spiced up the Sniper line-up to some extent. It has been trying desperately to take the AX50 Sniper Rifle’s spot with a little more mobility and slightly less power.

It really is a tempting choice if you equip it with the right attachments. Most people will confess that Pelington 703 Sniper Rifle feels like something in between the Marksman Rifles and Sniper Rifles, which is exactly what some players are after.

If you want a Rifle that could hit those long-range shots more effectively than the KAR98 without the clunky feel of an AX50, give this beast a try. 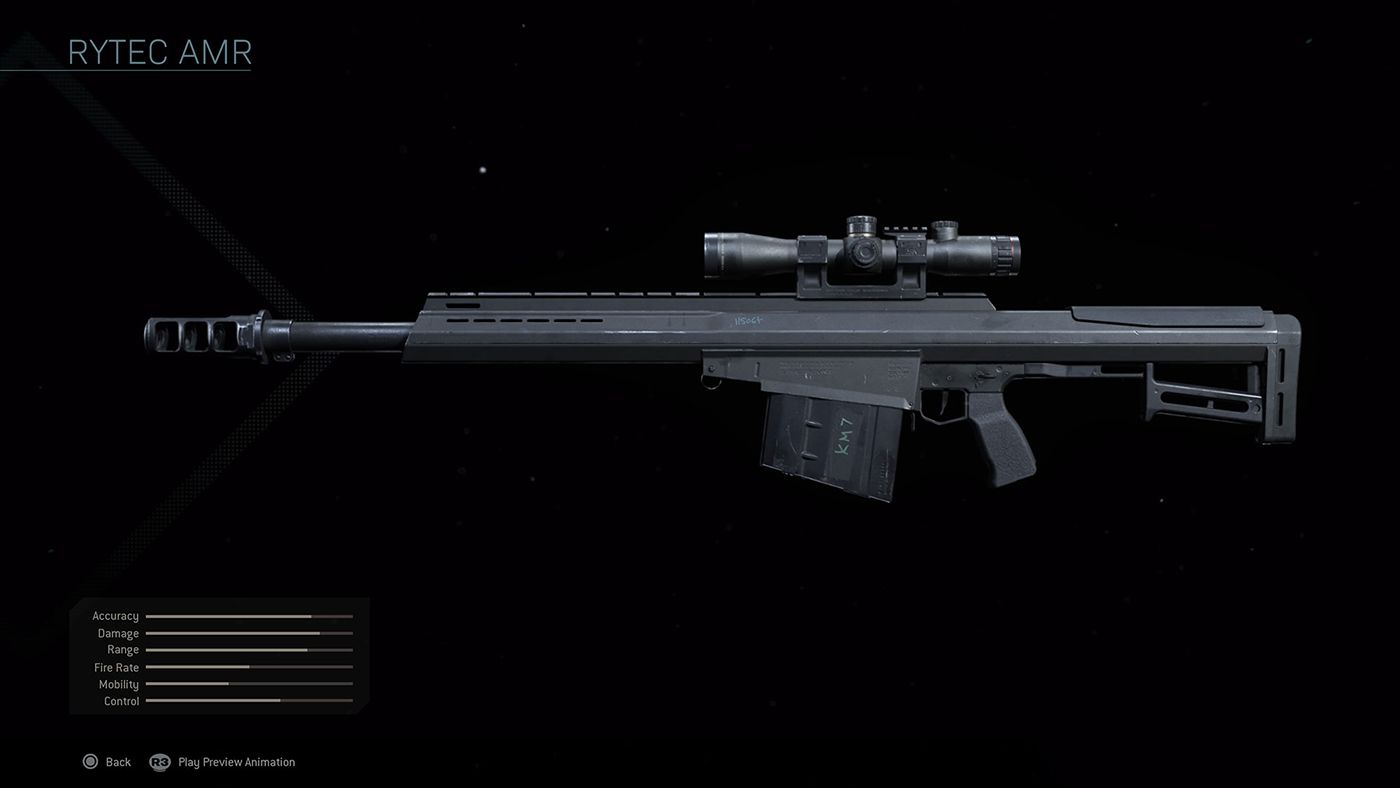 This gun brings a different element to the Sniper family, namely in terms of fire rate. We talked about how the HDR is meant to be a precise yet slow weapon for those certain shots from across the map. The Rytec lacks the bullet velocity of the HDR but allows you a successive output comparable to that of Dragonov with much more power.

This means that the fire rate enables you to compensate for the lack of accuracy in long-range shots. If you are not able to hit those breathtakingly accurate headshots from 500+ meters, you can choose the Rytec for those consecutive shots.

Furthermore, another feature distinguishes this Rifle from all the other Snipers. You can equip explosive rounds to it, which upon landing close enough to your enemy, deal splash damage.

It is really disorienting to get hit by one of those powerful shots. But, you should keep in mind that to get your hands on this gun, you have to complete a difficult challenge. So, get a Marksman Rifle and go for those Quickscopes if you really want to taste this gun’s unique features. 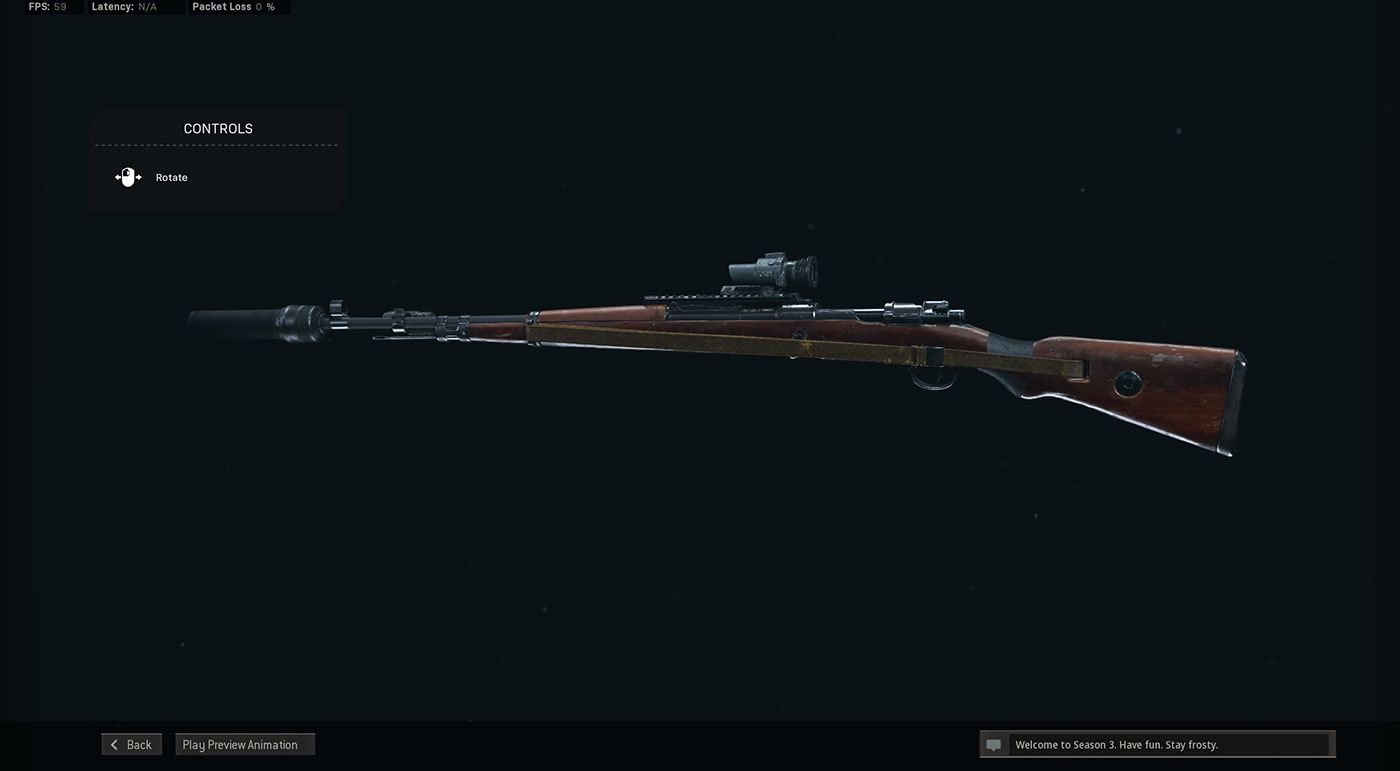 Many people would argue that the KAR98K is the best Marksman Rifle in the game. It allows you to take enemies out from relatively long ranges while not being as awkward as the Sniper Rifles to carry around.

However, you are going to have to compensate for the bullet drop due to the lower bullet velocity.

Players who have used the weapon for a while are accustomed to the bullet drop and actively compensate for it by aiming higher and leading their shots.

It’s just the perfect tool for the aggressive players running around to increase their body count. The mobility of this Marksman Rifle intertwined with its high damage makes it a mobile yet powerful nightmare of a gun. 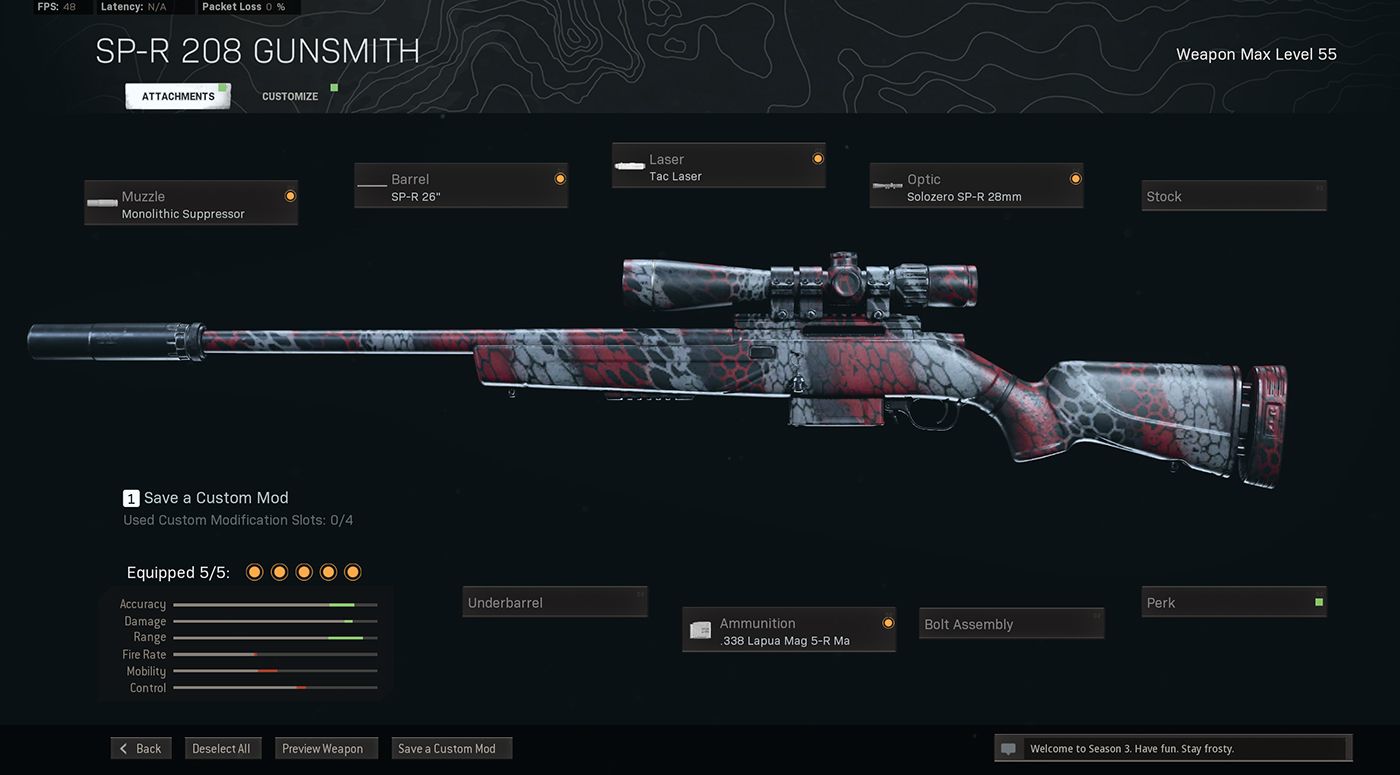 Having talked about the Marksman Rifles, it would really be unfair not to touch upon the SP-R 208. SP-R 208 is more powerful than the KAR98K at the cost of being slower. It is a trade-off most players are not willing to take.

The primary reason behind it is that you are most probably not going to be able to kill a player by a body shot. So, no matter which gun you use, you need two shots to the body to kill your enemy, while both will kill them with one shot in the head.

Why, then, should you sacrifice the extra speed from the KAR98K for this weapon’s additional damage while you would still need to hit the enemies twice? It’s understandable that some people prefer the higher bullet velocity and damage, but the KAR98K is recommended over the SP-R 208 if you are looking for a mobile Marksman Rifle.