BenQ’s TH585 ‘gaming projector’ lives up to that promise

You have a lot of great options when it comes to how you display your gaming devices. Televisions are reaching a point where you can get a great 4K HDR 55-inch set for well under $1,000. And all of that is wonderful for gaming even if I miss the phosphorous glow of cathode rays. But I’m at a point where I would trade in most of those features for something bigger, and that’s exactly what BenQ’s TH585 gaming projector provides.

The BenQ TH585 is out now for $600, and the company is positioning it as a “low input lag console-gaming projector.” I’m going to examine the TH585 in that context. How does it perform with games in terms of picture and latency?

The BenQ TH585 is an excellent gaming projector

BenQ’s projector handles games well. I played a number of games that I’m familiar with to see if anything felt off. The TH585 had no issues with input lag or latency. I got right into the flow with games like Trials Rising that require precise inputs and reactions. Even with something like Google Stadia that introduces a tiny bit of extra latency, everything remained snappy and responsive.

The TH585 also includes BenQ’s “game mode,” which is different than similarly named settings in televisions. Activating game mode on a TV usually turns off image processing to reduce lag. BenQ, however, says its game mode “fine-tune images.” And what it looks like is some sharper contrast and saturation to make 3D environments appear more vivid. But it has no affect on latency.

But whether you’re using game mode or not, your content is going to look great. It projects a full HD 1080p image up to 150 inches. That’s sharp enough even at those larger sizes. The lamp is also great. It provides 3,500 lumens of brightness, which means you don’t need to seclude yourself in a perfectly dark environment. 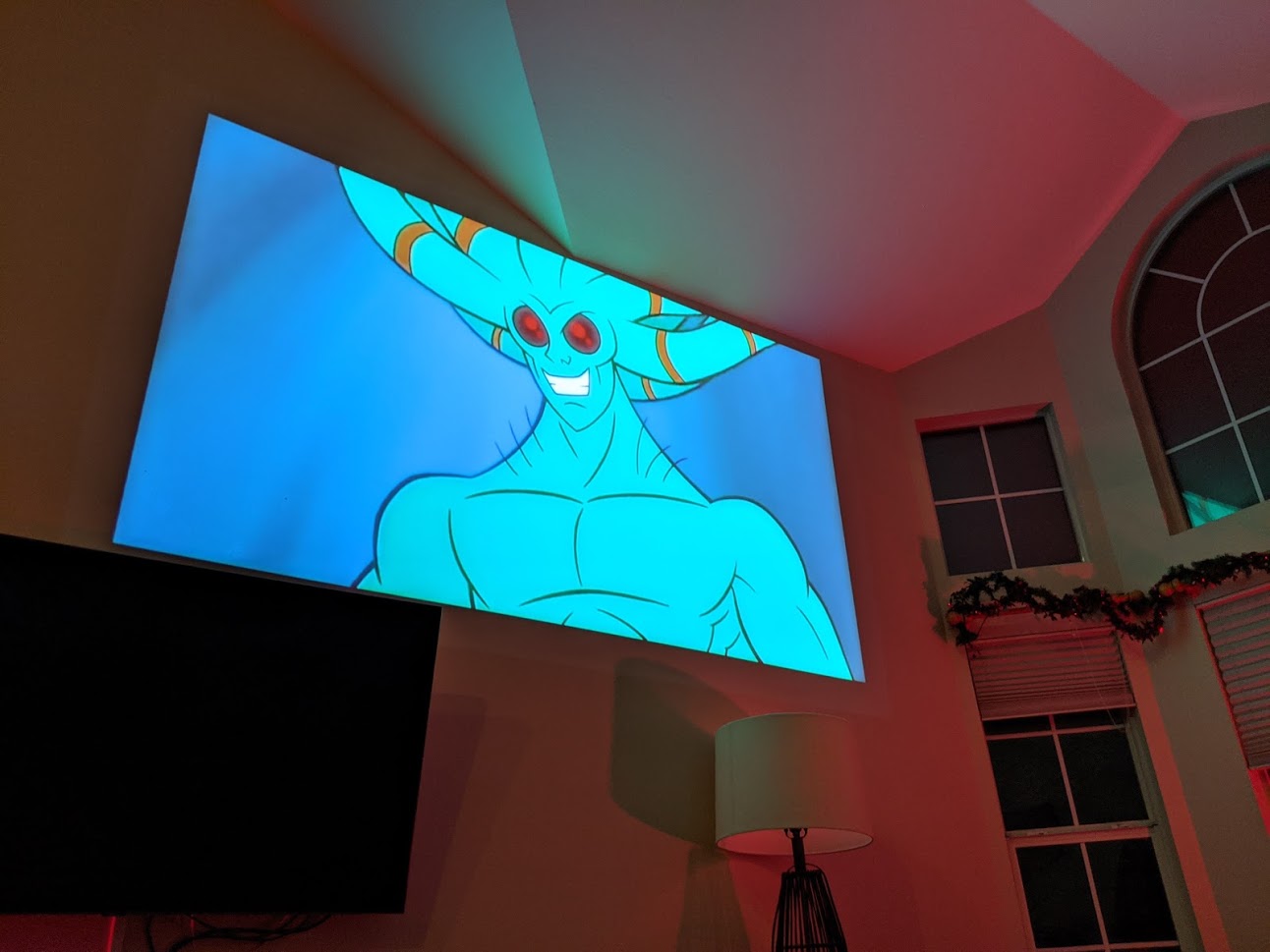 Above: Kit Fisto approves approves of this.

Easy to set up

BenQ also makes it easy to plunk the TH585 down and get it going quickly. This is useful because the projector is compact and light enough to take with you to a friend’s house.

Using the remote, you can then adjust the alignment to ensure that you are getting a rectangular image and not a trapezoid. You can also move the picture up and down on your wall with the digital lens shift. This all makes it so that you don’t have to try to get the physical placement of the project perfect. That reduces the headaches it introduces in its setup.

While setting up the TH585 is relatively easy, that comes with a few caveats. It’s simple if you’re ready to build the room around a projector. Using a projector instead of a TV means having your I/O options in the back of a room instead of at the front. This can complicate where you put consoles and audio devices.

And the BenQ TH585 makes it a little more challenging with only two HDMI ports and a VGA port. Now, one of those HDMI inputs is also MHL. That means it can provide power to certain HDMI dongles, so you don’t need a separate USB cord. But you’re not going to run four different HDMI devices into this projector like you do with a lot of TVs.

That makes some sense. For an ideal home-theater setup, you’d have most of your gaming systems going into a HD audio receiver, and then that receiver would go out to the TH585. But at $600, this device isn’t really for the customer who also spent $1,400 on a receiver.

But you’ll need something because while the projector has a speaker built into it, it’s no replace for real home audio. Cheap solution is probably to plug headphones into your controller. Or if you have a soundbar, connect a Bluetooth transmitter to the audio out port of the projector and send that out to your speaker system.

My time with the BenQ TH585 made me reassess exactly what I want from my gaming displays. Features like 4K are less important than I thought. A projector delivers a huge picture that is much more immersive than just having twice the pixels.

But while I’m willing to give up resolution, the BenQ ensures you don’t have to give up responsive inputs and other elements crucial to a satisfactory gaming experience. If you understand what it takes to build a gaming setup around a projector, I’d recommend the BenQ TH585 — especially at the $600 price.

BenQ’s TH585 is available now for $600. BenQ sent a sample unit to GamesBeat for the purpose of this review.