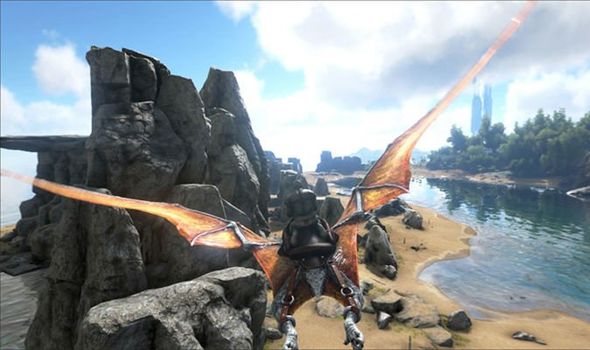 The development team behind the popular survival game has confirmed that they will be bringing the popular Crystal Isles map to the PS4, Xbox One and PC platforms this Summer. While currently available as a mod on Steam, ISO: Crystal Isles will be adopted and supported by Studio Wildcard. This will make it possible for the new map to be launched on consoles, as there is no current modding support available.

The same system was used to bring ARK Ragnarok to PS4 and Xbox One, which proved a massive hit with fans.

It will effectively mean that a free new map will be available to explore, even if you haven’t bought ARK Genesis in recent weeks.

A message from Studio Wildcard adds: “We are very excited to announce that the one-of-a-kind experience of the ISO: Crystal Isles map will be coming to PC, XBOX, and PlayStation this Summer!

“Crystal Isles is a stunning, other-worldly map filled with a vibrant display of teeming life scattered amidst its varied landscapes, awe-inspiring floating islands and breathtaking biomes.

“Ever since Crystal Isles launched as a mod in 2016, its fantasy appeal has secured its place as one of the most popular maps within the ARK community and we can’t wait to bring it to players as a fully supported free DLC.

“The Crystal Isles DLC will also launch resplendent with a new real-world dinosaur to tame! What do you think the new dinosaur may be?”

Crystal Isles has a scheduled release date for Summer 2002 but it’s expected that this will remain a flexible launch window.

ARK Ragnarok needed a lot of time to become fully supported across all platforms and there’s reason to believe that the process will be similar for the Crystal Isles.

The ARK Sponsored Mods program was set up in 2017 and remains an important part of Studio Wildcard’s long term plans for the game.

It means that many of these new maps will also benefit from changes Studio Wildcard makes to its current lineup of Dinos, with more tweaks being worked on for this Summer.

This includes the launch of TLC Pass 3, which will change the appearance and functionality of existing creatures.

Wildcard hasn’t announced which ones have been selected yet, telling fans this week:

“In other news, we’ve been itching to share that we’ll be performing a TLC Pass 3 in the Summer of 2020!

“This TLC pass will see some of our classic creatures get some new love via visual and functional upgrades.

“As we move closer to the release of the new Crystal Isles DLC and our much-awaited TLC Pass 3 we’ll share more details and information with our players.”

Wildcard has also provided an update on ARK Genesis, with work being done on a new patch for the game.

It’s unclear when this might be made available but the development team has confirmed that they are looking to remove bugs, including ones affecting Primitive Plus Mode.

“Primitive+ remains a priority. We have engineering teams working on the complications from the Genesis update. We will keep you informed with any significant progress

“We’re continuing to work on Genesis bugs and balance and we plan to keep up with the rapid iterations. Thank you for your reports and feedback.”