90% of Gen Z is now using apps with interactive live video according to a new study by Agora, which polled over 1,000 Gen Z U.S. consumers on their use of “real-time engagement” — commonly referred to as RTE — technology over the last year. 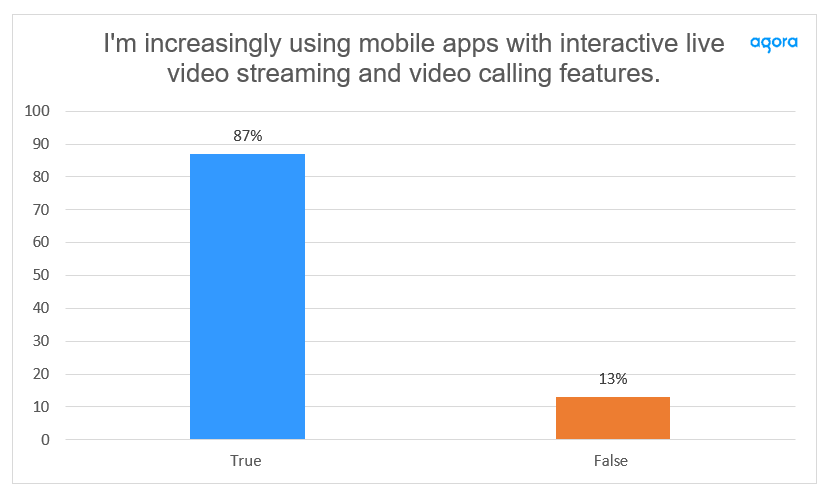 RTE refers to digital experiences that are interactive, collaborative and shared, through live video, live audio and extended reality (AR or VR). For example, students in an education app want to see classmates; users in a dating app want to see potential partners, and buyers in a shopping app want to talk to sellers.

Whether it be Twitch or TikTok, Agora’s study found that Gen Z are increasingly relying on RTE video or audio features in the apps they use. In fact, 87% are using more apps with built-in interactive live video streaming or calling. Meanwhile, 62% have tried apps with interactive live audio streaming, capturing the growing popularity of services like Twitter Spaces and Clubhouse.

Agora also found RTE technology was more important for certain categories of apps. When asked if interactive video or audio were important for their gaming apps, for example, 69% — more than two-thirds — agreed. Beyond gaming, Gen Z wants RTE integrated into their ecommerce and retail apps. Seventy percent said they would prefer retailers to offer AR and VR so that they can test and try products at home before buying.

This survey was conducted by developer platform Agora in August, 2021 and included over 1,000 Gen Z respondents in the U.S. The findings were released ahead of real-time engagement and developer conference RTE2021.

Read the full report by Agora.