Funkoverse is a fantastic new strategy board game that uses miniature Funko POP! figures as game pieces. Funko offers a variety of base games and “Expandalone” boxes across a range of fandoms, including Harry Potter, Jurassic Park, and DC Super Heroes. Players can take any 3 characters from any set into battle when they play the game, giving Funkoverse a ton of depth and replayability while making the mini figures exceptionally collectible. If you’re just getting into Funkoverse, here are 5 tips to help you collect, organize, and make the most out of your new hobby.

This is the most obvious tip for current collectors of Funko POP! figures, but may seem counter-intuitive to board game players. Each base game comes with 4 miniature POP! figures, the Expandalones come with 2 figures, and the Aggretsuko expansion comes with 1. Typically it’s best to keep all of your game pieces in the same box so you have everything together when you want to play, but in the case of Funkoverse, we recommend getting the minis out of the box and on a shelf, here’s why:

Each box comes with a nice fitted tray for the figures with spots for the game’s cards and tokens, but Funkoverse is a game for collectors, and a single base game box or Expandalone won’t get you the full experience. Once you’ve amassed a small collection of add-ons (which happens quickly if you’re anything like me) it won’t make sense to keep everything in sperate boxes. You can fit everything you need to play the game in one box, you just need to remove the tray and the figures.

The other reason? Funko POP! figures are meant to be displayed! You can fit a lot of these miniatures on a shelf and they look great together on their bases holding their tiny weapons. If you’re getting into Funkoverse, don’t let your beautiful figures stay stored away in boxes until it’s time to play, get those things out on a shelf so you can enjoy them every day, while also keeping your game more organized.

In most other board games we’d recommend simply grouping tokens and game pieces by type, but for Funkoverse, there’s a much better way to stay organized. You’ll be selecting 3 characters to play with so it’s best to be able to locate their specific tokens and cards quickly to save time, allowing you to get right into the game. We recommend taking each figure’s character sheet, ability tokens, and special tokens/cards/dice and sorting them into separate bags. 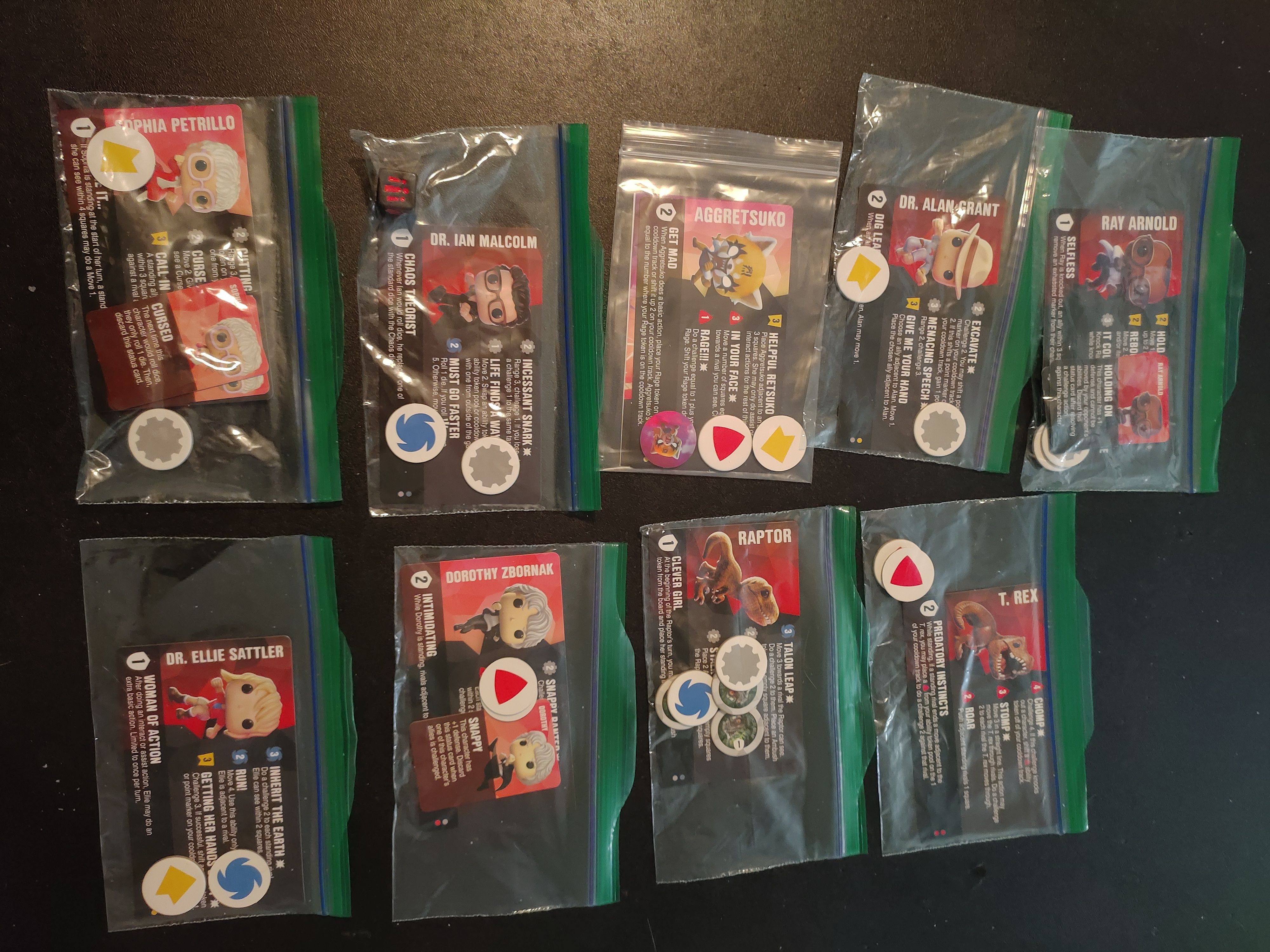 For this, we used snack-sized Ziploc bags. This way, all of the character packs fit easily together in one box and it’s incredibly easy to keep everything organized. When starting a game we simply select our three characters and pull out their corresponding character pack. When we’re done, everything goes back into their own individual baggies and into the box for next time.

Consolidate Everything Into One Play Box

Every time you add a base game or Expandalone to your collection you’ll get a new board with scenarios, figures with their specific tokens/cards/dice, a rule book, cool down trackers, and a playset of dice, tokens, and point markers. You only need to keep a single playset in your play box, everything else can go. 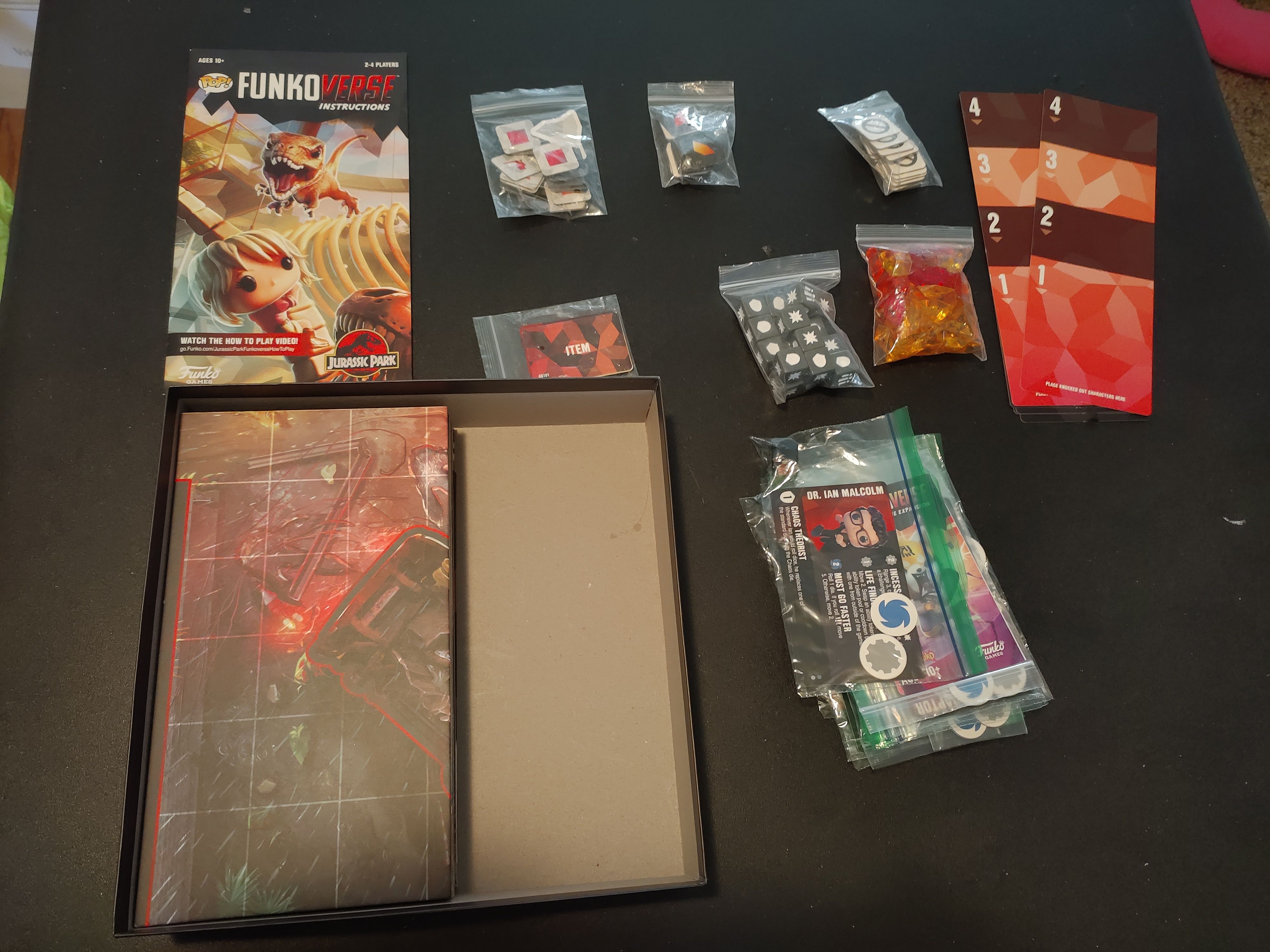 A full-sized base set box can store 4 boards on one side. Personally, I like to slide the 2 scenario cards for each one inside the folded up board when I stack them in the box, but some people like to choose their scenario before they pick which board to play on so it’s also fine to just lay the scenario cards on top of the board. Once you get more than 4 boards, you can fit 4 more snuggly in a single Expandalone box.

On the other side of the box, make separate bags for your point markers, dice, objective tokens, and item cards. Add in your character packs, a pair of cool down trackers, and a rule book or two if you wish, and you’re all set. This single box contains everything you’ll ever need to play every iteration of Funkoverse, not including the figures themselves. Everything else should go into a box of spare parts. 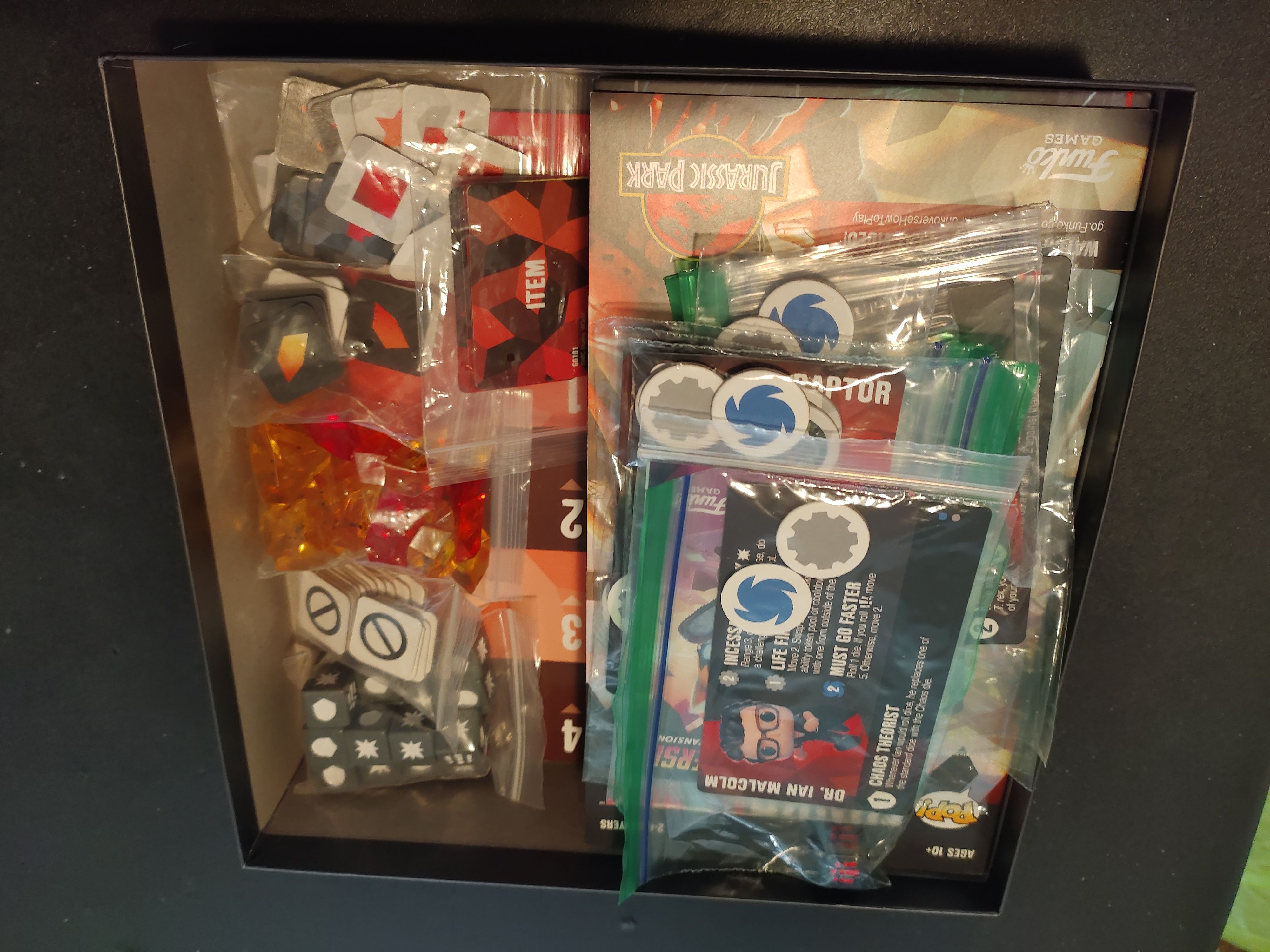 Funkoverse is as fun to play as it is to collect. Funko has brilliantly designed each base game and Expandalone to be playable by itself or with any combination of other Funkoverse sets. Don’t let the number of boxes and extra materials overwhelm you; organize, consolidate, and display, and you’ll get getting the most out of your Funkoverse collection.