Mozilla has responded to the U.S. Department of Justice’s antitrust lawsuit against Google, but rather than commending the DOJ’s action, the Firefox browser maker has voiced concerns that its commercial partnership could make it “collateral damage” in the fight against Google’s alleged monopolistic practices.

The DOJ, with support from 11 U.S. states, confirmed yesterday that it is suing Google for allegedly violating anti-competition laws by crowding out rivals in the internet search and advertising markets.

“Small and independent companies such as Mozilla thrive by innovating, disrupting, and providing users with industry-leading features and services in areas like search,” Mozilla chief legal officer Amy Keating wrote in a blog post. “The ultimate outcomes of an antitrust lawsuit should not cause collateral damage to the very organizations — like Mozilla — best positioned to drive competition and protect the interests of consumers on the web.”

Frenemy at the gates

Mozilla has a long and complicated history with Google. In recent years, Mozilla has launched countless privacy campaigns against the internet giant’s various online properties, and just last month it introduced a new browser add-on to crowdsource research into YouTube’s opaque recommendation algorithm. On the other hand, Mozilla relies heavily on royalties from a search engine partnership with Google. The duo recently extended their deal to make Google the default search engine inside Firefox in the U.S. and other markets, which will reportedly secure Mozilla up to $450 million over the next three years. 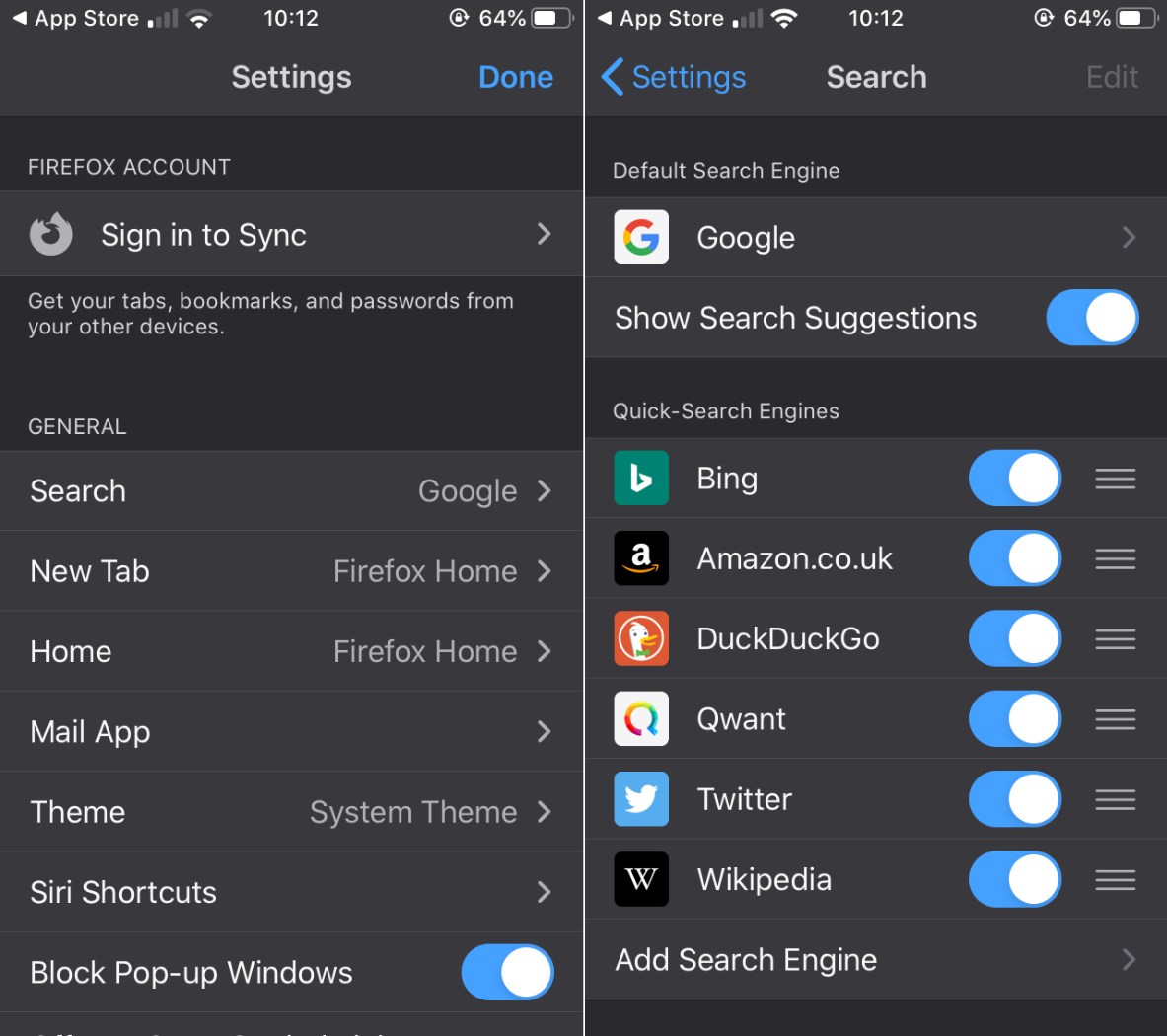 Above: Google is the default search engine inside Firefox across many markets

But the DOJ has focused on deals like this, across the software and hardware realms, as part of its investigation into Google:

For years, Google has entered into exclusionary agreements, including tying arrangements, and engaged in anticompetitive conduct to lock up distribution channels and block rivals. Google pays billions of dollars each year to distributors — including popular device manufacturers such as Apple, LG, Motorola, and Samsung; major U.S. wireless carriers such as AT&T, T-Mobile, and Verizon; and browser developers such as Mozilla … to secure default status for its general search engine and, in many cases, to specifically prohibit Google’s counterparties from dealing with Google’s competitors.

The DOJ notes that aside from Microsoft, whose Edge and Internet Explorer browsers default to Microsoft’s own Bing search engine, Google has revenue-sharing agreements (RSAs) with nearly every major browser operator. It added: “Over 85% of all browser usage in the United States occurs on Google’s own Chrome browser or on one of the browsers covered by these revenue-sharing agreements.”

So someone looking to escape Google’s clutches by replacing Chrome with Opera’s browser, for example, will end up with Google as their default search engine. 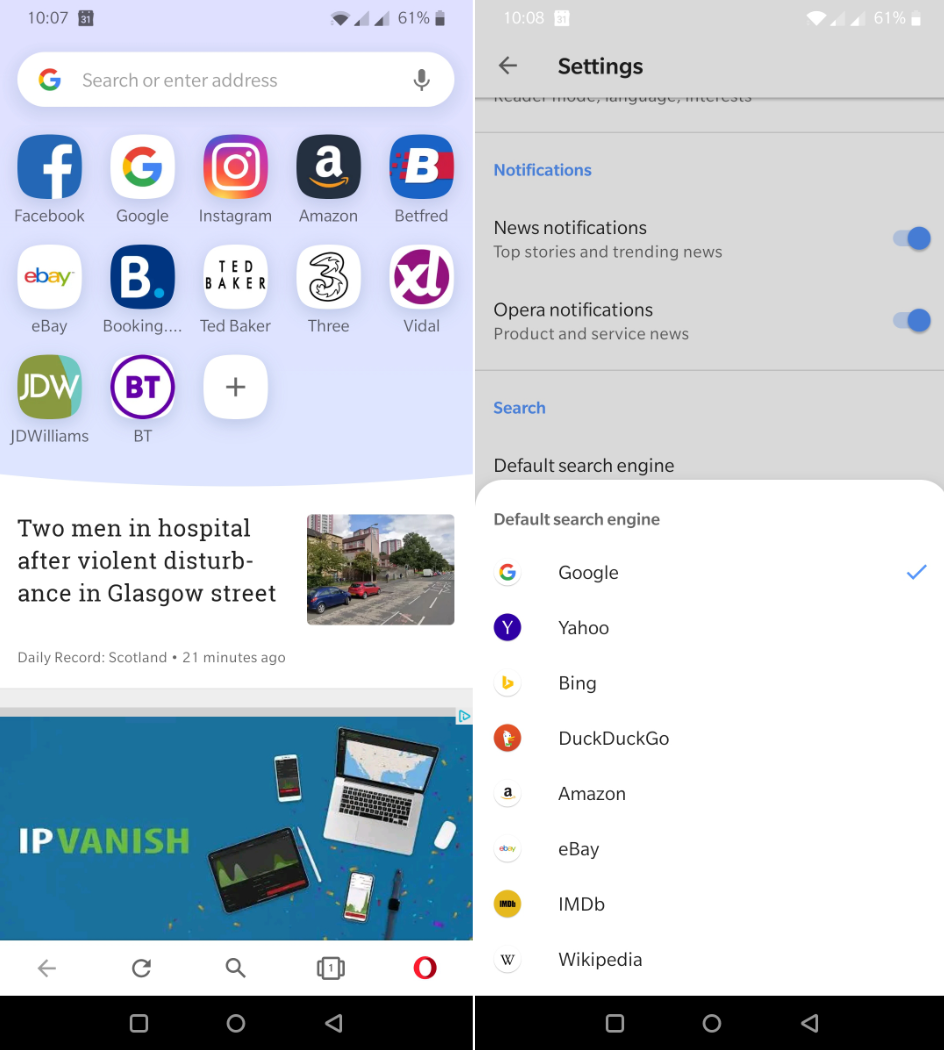 Above: Google is the default search engine inside most third-party browsers, including Opera

Google pays Apple billions of dollars each year to be the default search engine on Safari, which — with 35% market share — is the second most used browser in the U.S. after Google’s Chrome. This is something anti-competition regulators in other markets are looking into as well. With a market share of just over 4% across all platforms, Firefox doesn’t have a huge presence, but it’s big enough to command hundreds of millions of dollars from Google.

One might imagine Mozilla would be delighted to see the DOJ target an outsized rival like Google. But the lawsuit’s focus on Google’s “exclusionary” practices has given Mozilla cause for concern — and with good reason. The organization recently announced a major restructuring of its corporate division, leading to 250 layoffs — a quarter of its workforce — alongside plans to “tighten and refocus” its product lineup, which has led to closures and spinoffs. Mozilla doesn’t appear to be in the best of health, and now it may have to worry about its income from Google being compromised by the DOJ’s investigation.

Mozilla is in a tricky position here. It has positioned itself as a viable alternative to Big Tech and increasingly played the role of internet activist against behemoths such as Google and Facebook. But while it may want to nibble at the hand that feeds it, it doesn’t want to bite it clean off.

“Like millions of everyday internet users, we share concerns about how Big Tech’s growing power can deter innovation and reduce consumer choice,” Keating wrote. “Unintended harm to smaller innovators from enforcement actions will be detrimental to the system as a whole, without any meaningful benefit to consumers — and is not how anyone will fix Big Tech. Instead, remedies must look at the ecosystem in its entirety and allow the flourishing of competition and choice to benefit consumers.”

The DOJ has alluded to ways it might address exclusive deals like those signed by Google and Mozilla and concluded that in a competitive market, “rivals could compete to be the preset default general search engine on a browser.” This sounds like something similar to what is going on in Europe at the moment, with Google launching quarterly auctions to determine which search engine options are displayed when consumers first set up their devices.

The Google antitrust case recalls the U.S. v. Microsoft case of the late ’90s, one that enabled Mozilla (and Firefox) to eventually flourish. Except this time around, Mozilla could end up being collateral damage.