Yuree began his run with a 2-0 victory over Ashton “Linkyoshimario” Cox. However, he quickly fell into losers after suffering an 0-2 loss at the hands of Álex “PokeAlex” Gómez Berna. Yuree then defeated Eduardo “EmbC” Cunha to advance into top 4.

Yuree continued his run after rematching Linkyoshimario, winning 2-0 once again. He then eliminated James “Jamesspeed1” Baek in order to advance into Grand Finals. There, he once again faced off against PokeAlex, the one who had sent him to the losers bracket. However, Yuree was much better prepared the second time around, sweeping PokeAlex 4-0 between both sets of Grand Finals.

A closer look at Yuree’s team

Yuree’s Pokémon Players Cup VG Invitational team made use of an interesting core of starter Pokémon with Hidden Abilities. This included Cinderace with Libero, Rillaboom with Grassy Surge, and Primarina with Liquid Voice. Yuree also added Togekiss and Dusclops as support Pokémon, plus a Bisharp with Defiant as another offensive threat.

I won the Players Cup Kickoff Invitational!
Here’s the rental for the team, shoutouts to @MattieMooVGC for the original team and @PadoVGC for helping me fix it.
See you in August!https://pokepast.es/92e37fe9f0fbed32 … 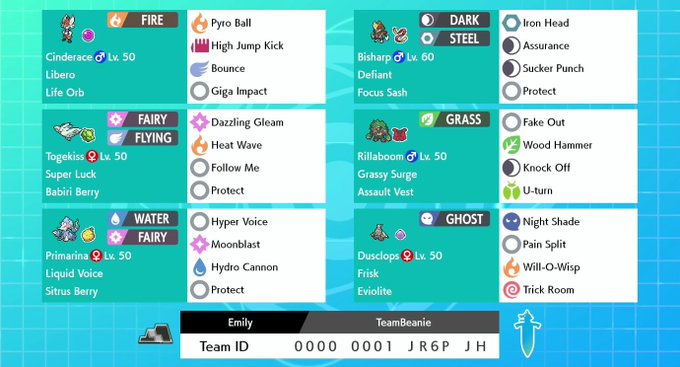 Yuree’s team proved to be very flexible, taking on various different modes, especially across his several games with PokeAlex. Notably, his team featured two different kinds of speed control, making it difficult for his opponents to outpace him. Sometimes, he raised his own speed with Dynamax Cinderace’s Max Airstream. In other matches, he made slower Pokémon go first with Dusclops’ Trick Room.

In addition to the aforementioned players, this VGC tournament featured Markus “Yoshi” Stadter, Wolfe “Wolfey” Glick, and Graham “Ammodee” Amedee. The next Pokémon Players Cup event will be a Pokkén Tournament DX invitational. It will take place from June 27 – 28.