The University of Warwick, home of Warwick Esports, has announced plans to invest £275,000 of its own earned income to establish a new ‘flexible’ esports centre on campus.

Located in the ‘Junction’ facility, the esports centre will help ‘stimulate innovation’ in the school’s newly refurbished basketball court. The centre will seek to work closely with regional and national partners including CWLEP, Create Central, and WMCA to lead esports initiatives. 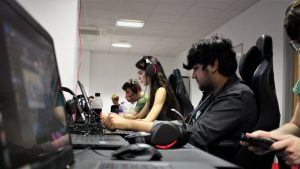 Warwick’s investment of over a quarter of a million pounds will cover the esports centre’s initial physical infrastructure and equipment. This, the university says, will make it equal to ‘any other such facility in the UK’ and the first at a Russell Group university.

The organisation is also looking for launch sponsors so it can provide coaching, training, and development activities ‘that will be accessible to all.’ All launch partners will sit on an advisory board. Warwick Esports signed HyperX as its first commercial partner in November.

The University says that this new esports centre will provide a facility in which to conduct training and research into esports whilst doubling as a medium-sized esports competition venue. The esports centre will be configured so that equipment can easily be moved to a larger venue on campus or elsewhere for larger-scale events.

Clare Green, a Women in Games Ambassador and Creative & Digital Communities Manager at the University of Warwick said: “Unlike traditional sports, [esports] is a level playing field. Whether you are neurodiverse, whether you are male, female, physically disabled, or able-bodied and regardless of age, all people can play together. This is what is so exciting about the esports industry. There is a lot of work to do in terms of diversity and inclusion, but this centre provides us with a genuine opportunity for positive actions and change.”

According to a release, the focus of the facility will be to provide opportunities for the wider community, as well as for students and the esports society. This will include outreach programmes with local schools, community groups, and larger bodies such as Women in Games.

Yinsu Collins, a University of Warwick graduate and award-winning Esports Journalist and host added: “I wished I’d known at University that I could do the things within my career that I do today. There are so many opportunities to do different things within the esports industry; covering everything from playing to media, PR, graphic design, streaming through to writing, presenting, events, sales and marketing. The possibilities are endless. It’s narrow-minded to look at esports and just focus on games and players as there are so many well-paid jobs – it’s so much more than the games.”

RELATED: Gen.G Tigers of Shanghai relocates to University of Kentucky

Moreover, Jack ‘Coach’ Fenton, former President and co-founder of the University of Warwick Esports Society, added: “Considering the multi-disciplinary nature of esports, a vast range of external stakeholders have been identified that we are seeking to partner with. These represent external bodies that include corporate organisations, those committed to equality and diversity, national organisations that promote esports, regional & national skills councils, local schools, and charities.”

Esports Insider says: Riding high on winning NSE’s ‘Esports University of the Year’ twice in a row, The University of Warwick is poised to become a hub for esports training in the country.