This was an absolutely amazing week for Street Fighter League with some fantastic matches and concluding with a downright legendary performance. This week featured Psycho Shinobi’s Caba, Xian, and HotDog29 versus UYU’s Kami, Oil King, and JB in the first half of the night. Following that was Alpha 3’s Punk, CJ Truth, and Nephew versus NASR’s Angry Bird, Big Bird, and Samurai.

The first ban of the night was Psycho Shinobi targeting Oil King and JB with a Rashid ban, which has been the case for UYU so far this season. UYU’s ban was, once again, Guile targeting Caba. The first match of the night was Kami’s Seth verses Caba’s Ryu. Kami was able to take game one 2-1 and game two 2-0 starting the night off with a decisive win for UYU. Next up was a Seth mirror between Oil King and Xian. The match started off with an amazing punish from Xian in round two dashing under a whiffed EX Mad Cradle from Oil King to get the corner. Xian then ended up taking game one 2-0. Oil King was able to finish the second round of game two with an incredible V-Trigger 2 detonation combo into EX Mad Cradle. However, Xian was still able to finish game two 2-1. The teams were then tied up 1-1.

The third match of the evening was JB’s Poison versus HotDog29’s M. Bison. On paper this is a good matchup for Poison, but HotDog29 was able to make you think otherwise with what followed. He was able to take games one and two 2-1 ending the match with an amazing air juggle finish. Psycho Shinobi now took the lead 2-1. This was a make or break moment for UYU as the fourth match began with another Seth mirror between Kami and Xian. Game one was a great back and forth, but Kami didn’t commit to using a critical art at the end of the third round which led Xian to get the chip kill and take game one 2-1. 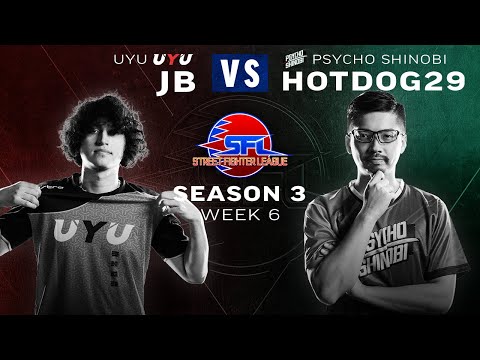 UYU continues to struggle this season

In game two there seemed to be some growing tension between UYU, and Xian was able to close it out 2-1 once more. Psycho Shinobi won the night 3-1. HotDog29 continues to demonstrate great leadership this season. Despite the night’s results, Kami still played extremely well. However, the Rashid bans continue to really hinder team UYU overall. Even with Rashid though, once the second half of the season rolls around, UYU will still face an uphill battle to qualify.

The back half of the night was Alpha 3 versus NASR with Alpha 3 banning Seth targeting Angry Bird and NASR banning Kolin targeting Nephew. There is actually some backstory between this matchup which Tasty Steve let us in on before the matches started. During the last Street Fighter League season Samurai OCV’d Punk’s Team Inferno after Punk called Samurai a “Wal-Mart budget Tokido.” So there is a bit of history between these two teams. The first match was CJ Truth’s Cammy versus Angry Bird’s Zeku. Angry Bird was able to decisively take both games one and two 2-1. Thanks to Angry Bird’s great performance, NASR put their first win up for the night.

Next up was Nephew and his G versus Big Bird’s Rashid. Nephew was able to pull off some amazing plays like back throwing Big Bird long enough to completely avoid Rashid’s V-Trigger 1 tornado. Nephew was able to take game one 2-1 but Big Bird responded with a vengeance taking games two and three 2-0 and 2-1 respectively. When the third match began, it was all done to Punk. On top of that, it was the runback everyone was waiting for against Samurai. Punk and his godlike Karin were able to take both games one and two 2-1 from Samurai’s Akuma, ending the match with an amazing air to air juggle. This gave Alpha 3 its first point on the board and was the beginning of one of the greatest runs in the history of Street Fighter League. 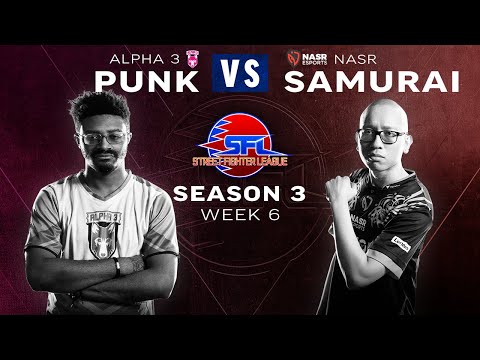 Punk shows why he is the cream of the crop

The next match was Punk versus Angry Bird and his Zeku. Game one saw an amazing whiff punish from Punk in round two after backdashing from a whiffed throw attempt. He then proceeded to take game one 2-0. Game two saw an amazing bait from Angry Bird in round two but Punk was still able to close it out with a perfect KO in round three. Now Alpha 3 tied it up 2-2. The fifth and final match of the night was Punk versus Big Bird’s Rashid. Game one saw another amazing air to air from Punk to close it out 2-0. Punk remained stoic, calm, and collected as they moved into the final game.

Another great read from Big Bird in round one didn’t stop Punk from finishing it up 2-1 securing the win for Alpha 3 going 3-2 as Punk OCV’d all of team NASR. Now an OCV is nothing to be taken lightly, regardless of who it is against. The fact that Punk was able to do it against such a stacked team as NASR shows what an absolute powerhouse he is and sends a statement to every other team in the league this season. No matter how close you are to victory, if Punk is waiting for you at the end of the line, nothing is for certain. Overcome with emotion in a great post match interview with RobTV, Punk said that he wasn’t sure if he would be able to pull it off. More than anything else though, he wanted to win for his two closest friends, CJ Truth and Nephew. An absolutely amazing performance putting the “God” in “Punk the God.”

At the end of the night Psycho Shinobi moved up the rankings to third with their record now 2-2. NASR is now at fifth with a record of 1-3 and UYU is still in sixth at 0-4, yet to put anything up on the board. Week 7 of Street Fighter League will feature All-In versus UYU as well as Alpha 3 versus Dynamite. The stream will begin at 7 PM ET on November 19, and you can catch it on the Capcom Fighters YouTube and Twitch channels.