In its plan of action, it states that every company has a responsibility to accelerate progress. In order to stay true to its word, Riot will contribute $1 million from its Social Impact Fund to the The Innocence Project and the American Civil Liberties Union (ACLU). The Innocence Project is a nonprofit that helps exonerate people who have been wrongly convicted of a crime. It is currently fighting for justice against police violence, a value also shared with Riot. Meanwhile, the ACLU helps defend the civil liberties of American people through litigation and lobbying. Currently, it is working to sue Minneapolis police for attacking journalists during recent protests.

A note from Riot’s President Dylan Jadeja on the commitment to drive change. https://riot.com/2UfOnYO 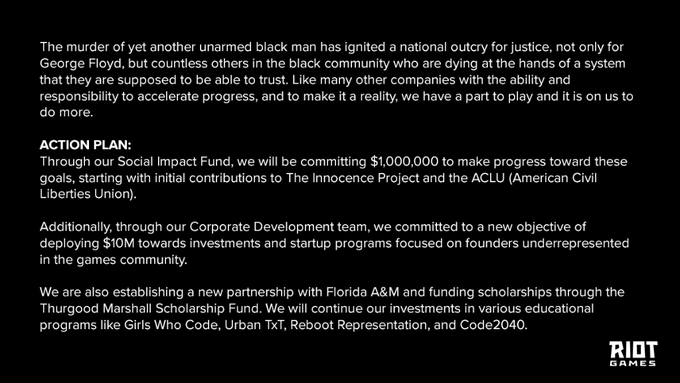 Diversity in the workplace

In addition to nonprofit contributions, Riot Games will be investing $10 million in startups programs for founders underrepresented in the industry.

In April, Riot released a report outlining its diversity and inclusion in the workplace and stated it had increased hires of underrepresented minorities by 6% in 2019. That aside, it has begun contributing to other organizations that encourage the development of future underrepresented leaders. Along those lines, it has created a partnership with Florida A&M University to help it develop a curriculum for gaming-centric future software engineers. It will help a $50,000 scholarship through the Thurgood Marshall Scholarship Fund for black students interested in game development as well.

Overall, Riot’s investments in education include a variety of organizations. These include Girls Who Code, Urban TxT, Reboot Representation, and more.

In an earlier tweet on Tuesday, Riot Games shared its values with its 1.9 million followers. The post addressed a call for nationwide criminal justice reform, long-term solutions for systemic change, and more. It follows along with other esports companies that share the same support for social change. Ever since the recent worldwide protests, many organizations have become vocal about racial equality and the Black Lives Matter movement.