Epic Games’ newest seasonal installment of Fortnite features arguably the most amount of new content. There are new weapons, NPCs, Vaults, and a ton of interesting locations to explore. However, as with every new season, Epic Games has a few tricks left up its sleeve for the remainder of Season 2’s life cycle. We have leaks surrounding upcoming cosmetics, plus other Mythic Weapons arriving sometime soon. However, there’s one leak that just surfaced recently, and it could be a game-changer. Let’s take a look at the rumored “Disguise Kit.”

What does the rumored Disguise Kit in Fortnite do?

With Season 2, there’s already a disguise system in place with the phone booths. If you’re unaware, red phone booths can be found around the map, and if you enter them, you can disguise yourself as a henchman NPC. While this doesn’t provide the best cover, it is useful in some situations.

That said, the reported Disguise Kit in Fortnite might be a little more practical. Of course, as with any leak, this is unsubstantiated by any official channels. This leak comes from the PC files of Fortnite, which was uncovered by a reputable data-miner. @iFireMonkey has the details on the potential new item for us. 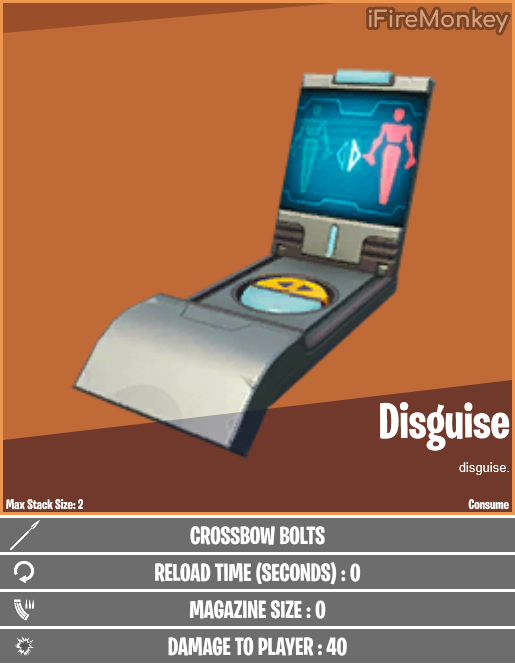 According to the image, the Disguise Kit will work similarly to the in-game Bush and Box. Apparently, you’ll be able to carry two of the kits. When you interact with them, you’ll disguise into something inconspicuous. At the moment, we’re unsure of what exactly you might be able to transform into, though.

It’s also unclear when the item will release, if it will at all. Epic Games has put images of items in the files before, then not actually released them for weeks or months. So, it could be a while before you can actually disguise yourself with a kit.

Make sure to keep up with Daily Esports for all Fortnite news.