Bitstamp will become the organisation’s official cryptocurrency exchange, as well as a ‘Founding Partner’. The two companies will collaborate on a series of activations, including the creation of a new content creator team. 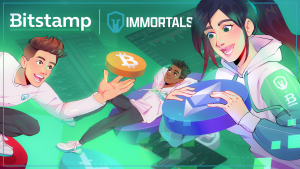 Immortals and Bitstamp will work together on three large-scale initiatives during the partnership. One of which is Team Bitstamp, a team of content creators that will serve as Bitstamp ambassadors as well as create giveaways and streams aimed at promoting cryptocurrency.

The second project is ‘Immortals Invasion’, which is a set of activations planned to take place at the 2022 League of Legends World Championship in North America. This includes in-person events, activations, vlogs, and other types of content. Lastly, Immortals and Bitstamp announced the LCS Trigger Program, a rewards programme for LCS viewers.

Jordan Sherman, the Immortals’ CEO, commented: “It’s a priority for us as an organisation to show up for our community and bring them value through innovative partnerships like this one with Bitstamp, the longest-running crypto exchange in the world. This partnership will further enhance the Immortals fan experience with real, tangible benefits that connect the crypto and gaming worlds.”

According to the release, the partnership will allow Immortals to explore future crypto integrations and NFT activations. Both entities also stressed the importance of education about cryptocurrency as one of the main aspects of the partnership.

Interestingly, this is not the first time Immortals has partnered with a crypto company. The North American organisation previously teamed up with Fetch.ai for an influencer campaign.

Esports Insider says: After Guild Esports partnered with Bitstamp in January 2022, Immortals does the same a month later. The partnership is looking extremely lucrative and will play an important role in future content efforts for Immortals.