It’s been almost two years since the release of Riot Games‘ K-pop group K/DA. Ever since its successful launch, their animated music video has reached over 362 million YouTube views. The feature was so successful that it even won the 2019 Short Awards for “Best In Games.” Now, League of Legends Korea has published a live version of the music video, starring K-pop girl group (G)I-DLE.

In November 2018, Riot Games decided to dive deep into K-pop culture, so they created an animated K-pop group. The one feature that made K/DA rise to fame was their only song—”POP/STARS.” With that, K/DA was born. The group consisted of Madison Beer, Jaira Burns, and (G)I-DLE, and each performer represented a League of Legends champion. From K/DA merch to cosplays, musical covers, and more, Riot Games really reached the hearts of K-Pop and gaming fans. The only live version of the song took place in the 2018 World Championship, where fans were excited to watch their musical idols perform. 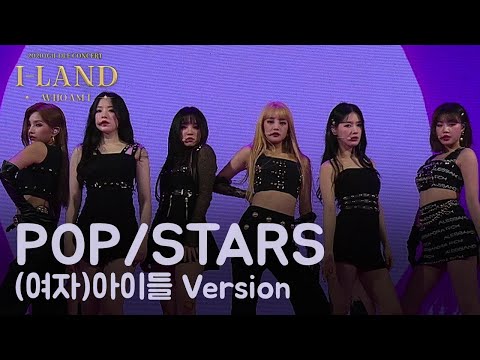 Since then, it’s been quiet for K/DA listeners, until now. The official League of Legends Korea YouTube account uploaded a new, live version of K/DA’s most popular single. Overall, several K-pop fans are excited to see their favorite girl group perform the energetic song. Differing from the original group, the only members in this live version missing are Madison Beer and Jaira Burns.

Although both American singers are missing, the entire (G)I-DLE group is pushing the performance to new heights. The group, consisting of Miyeon, Minnie, Soojin, Soyeon, Yuqi, Shuhua, is seen showcasing the original K/DA dance with their own twists. As a result, fans are more than happy about this unexpected upload. Some even mentioned they’ve waited two years for this kind of performance from the influential K-pop group.

Although K/DA has gained plenty of popularity, it’s no match for the impact created by (G)I-DLE over the years. The powerful girl group has released five extended plays and eight singles while writing and co-producing their own material. Not too long ago, they signed with American-owned music label Republic Records and received several brand endorsements from top organizations. While this doesn’t cover all of their achievements, anyone interested in learning more about them can visit their official website.

While POP/STARS is K/DA’s only single so far—there’s always room for another. Let us know whether you think Riot Games should continue developing the girl group, or if they should just stick with the single. Stick with Daily Esports for more esports and gaming news.