The Fortnite Chapter 2 – Season 4 Week 7 challenges are live in Fortnite and more XP is up for grabs. For players looking to advance their Battle Pass to unlock the next Marvel-themed cosmetics, challenges are the best way to do so. One of those Marvel cosmetics is Storm, who is fairly popular among the player base. However, most fans don’t know how to use her ability, Whirlwind Blast. Unfortunately for that crowd, you must deal damage after knocking an opponent back with it for one of the Week 7 challenges. Luckily, we know just how to do that in Fortnite.

As with most Marvel abilities in Fortnite, Storm’s Whirlwind Blast is most commonly found in the various Marvel LTMs. Epic Games has either removed the abilities in standard playlists or haven’t added them altogether.

However, with the LTMs, there is free reign to use whatever ability you desire. For this Week 7 challenge, you’ll be looking for Whirlwind Blast. Once you find the circular-shaped ability, simply pick it up and look for an unsuspecting enemy. While you can use the ability in the middle of a fight, it’s easier to come up behind an enemy, then use it. 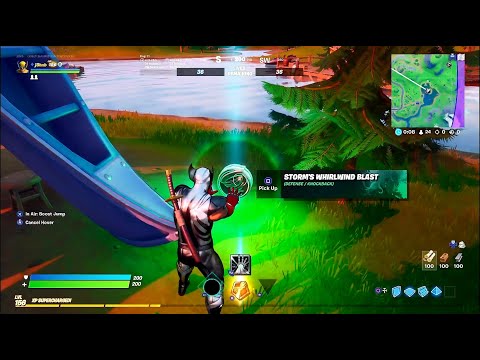 Once you’ve found a target, get as close as possible to them and use it. You’ll be lifted into the sky with a gust of wind and the opponent will be knocked back if you were close enough. This is your window to fire some free shots onto the enemy before they have a chance to shoot back. You only have a small window to make sure the damage counts towards this challenge, so fire as many shots as you can.

To complete this challenge, you’ll need to deal 1,000 damage after knocking an opponent back with Whirlwind Blast. This shouldn’t be too difficult as long as you’re in the Marvel LTMs and keep looking for the ability. Just remember to pick up at least one actual weapon before attempting to knock enemies back.

That’s it for this Week 7 challenge guide! Make sure to stay tuned to Daily Esports for more Fortnite guides and news.