Nearly 1,200 Fortnite players competed over three days at the DreamHack Anaheim Fortnite Open. Competitors from all across the globe made the journey to the Anaheim Convention Center to test their skills in a bring your own computer (BYOC) tournament. DreamHack implemented a simple format and unique scoring system, which had players compete in two separate heats, semifinals and then grand finals. The top 100 went to war, and the highest score over eight games earned the title of DreamHack Anaheim Fortnite Champion. As the final leaderboard populated, MrSavage of 100 Thieves came out on top as the tournament champion and winner of $30K USD.

Newly signed 100 Thieves roster member, MrSavage, played consistently throughout the day and turned up the intensity when he needed to. He first appeared on the leaderboard after match number three and never left the top ten after that. Over eight matches, MrSavage produced results of 80th, 17th, 9th, 9th, 5th, 79th, 40th and 1st. The young Norweigan’s consistency and game sense shined throughout the entire three-day tournament.

Match number eight proved to be the difference-maker as MrSavage compiled nine eliminations and completed the Victory Royale. His unprecedented end game effort saw him take out LZR Kreo and former duo partner, NRG benjyfishy. MrSavage closed out the final match by eliminating oDxnied with a purple pump shotgun. The final game of the tournament bumped MrSavage up to 400 points overall, which put him 46 points ahead of Ghost Bizzle for first place. 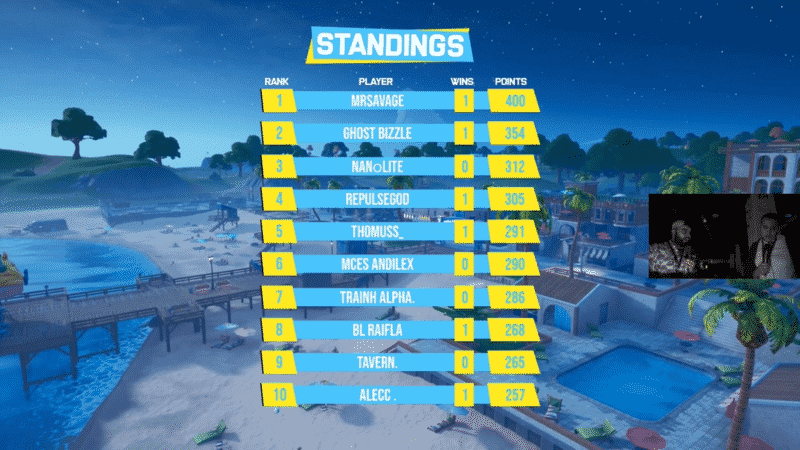 The top ten of this tournament featured players from nearly every competitive Fortnite region. Former Secret Skirmish winner, Ghost Bizzle, surged up the leaderboard late and earned a Victory Royale of his own in match seven, which granted him second place. Oceania standouts, Alecc and RepulseGod, respectively, took fourth and tenth place respectively.

Rising star Nanolite, remained consistent through all three days of play and caught the attention of many who were not aware of him. He finished in third place and will be on the radars of many moving forward. Europe’s TrainH Alpha, BL Raifla and former DreamHack Winter runner up, MCES Andilex achieves top-ten finishes. Thomuss and Tavern each represented NA West well, finishing respectively in fifth and ninth.

The eight game-winners in order were Khanada, LZR Wolfiez, RepulseGod, 100T Rehx, Alecc, Thomuss, Ghost Bizzle and MrSavage. Despite some minor setbacks throughout the tournament, streamers were able to capture most of the action. In a sea of many different regions, Europe reigned supreme and put all opposing areas on notice.

A Run for the Ages

MrSavage stole the show with his match eight performance and rightfully earned the title of DreamHack Anaheim Fortnite Champion. This victory marks his first in a LAN environment and continues an impressive stretch of competitive Fortnite. In addition to this, MrSavage broke the record for most points accumulated in a DreamHack Fortnite tournament. Shortly after the victory, MrSavage tweeted out, “Worked so hard for this s*** bro. Words can describe how happy i am rn.” Despite internet issues and the pressure of an open environment, MrSavage claimed his spot at the top of competitive Fortnite.

Congratulations to MrSavage on his victory at DreamHack Anaheim!